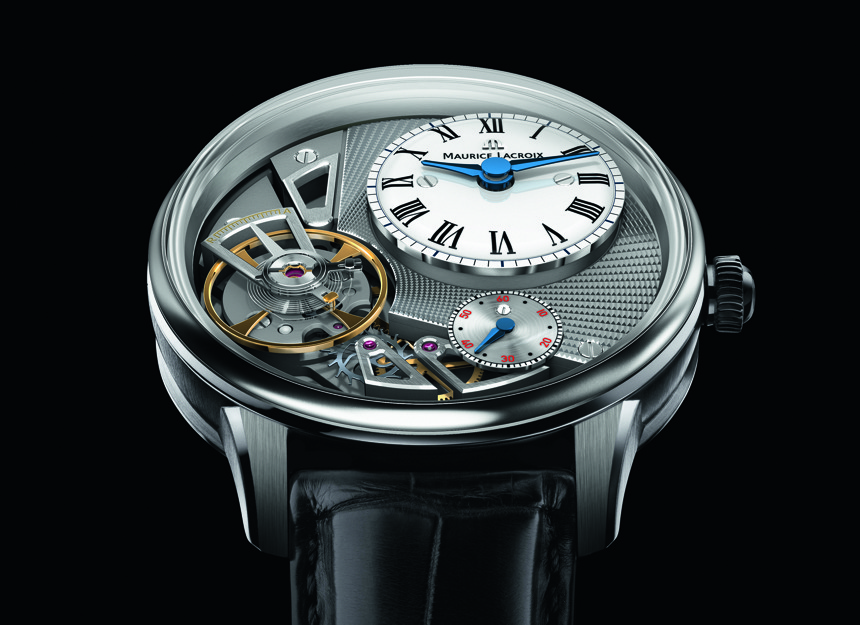 Besides their well known Pontos line, Maurice Lacroix has a great number of interesting watches in their Masterpiece line. We previously covered the Masterpiece Roue Carrée Seconde watch a few years ago which has square and cloverleaf gears indicating the seconds. For 2014, The Masterpiece collection gets a model known as the Gravity which is a uniquely appealing piece from the brand.

Maurice Lacroix has extended their haute horologerie “Masterpiece” line with the “Masterpiece  Gravity” which features a large balance wheel on the dial as part of an in-house made movement. According to Maurice Lacroix, this is the first watch equipped with an oscillator assortment (balance roller, lever and escapement wheel) entirely made of silicon, which has a lighter weight than metal and no need for lubrication.

What’s not to like with an escapement that promises greater accuracy, less maintenance, and more resistance to magnetic fields? Twenty years from now we will probably be shocked if watches don’t all use advanced materials in the same way that vintage movements without incabloc (or other shock absorption systems) seem ‘quaint’ by today’s engineering standards. With brands like Breguet and Patek Philippe using silicon, it can’t be all hype, right?

No doubt many of you will note the visual similarity of the Gravity to the exposed balance wheel and colors on the  Audemars Piguet Chronometer Jules Audemars watch (AP Escapement). Of course these watches are totally different, but the similarity (at least in the model with the blue and red tones) is probably at least somewhat intended.

Speaking of other watch brands, the look of the darker toned Masterpiece Gravity watch reminds me of the design language of Greubel Forsey, but with less extremism. 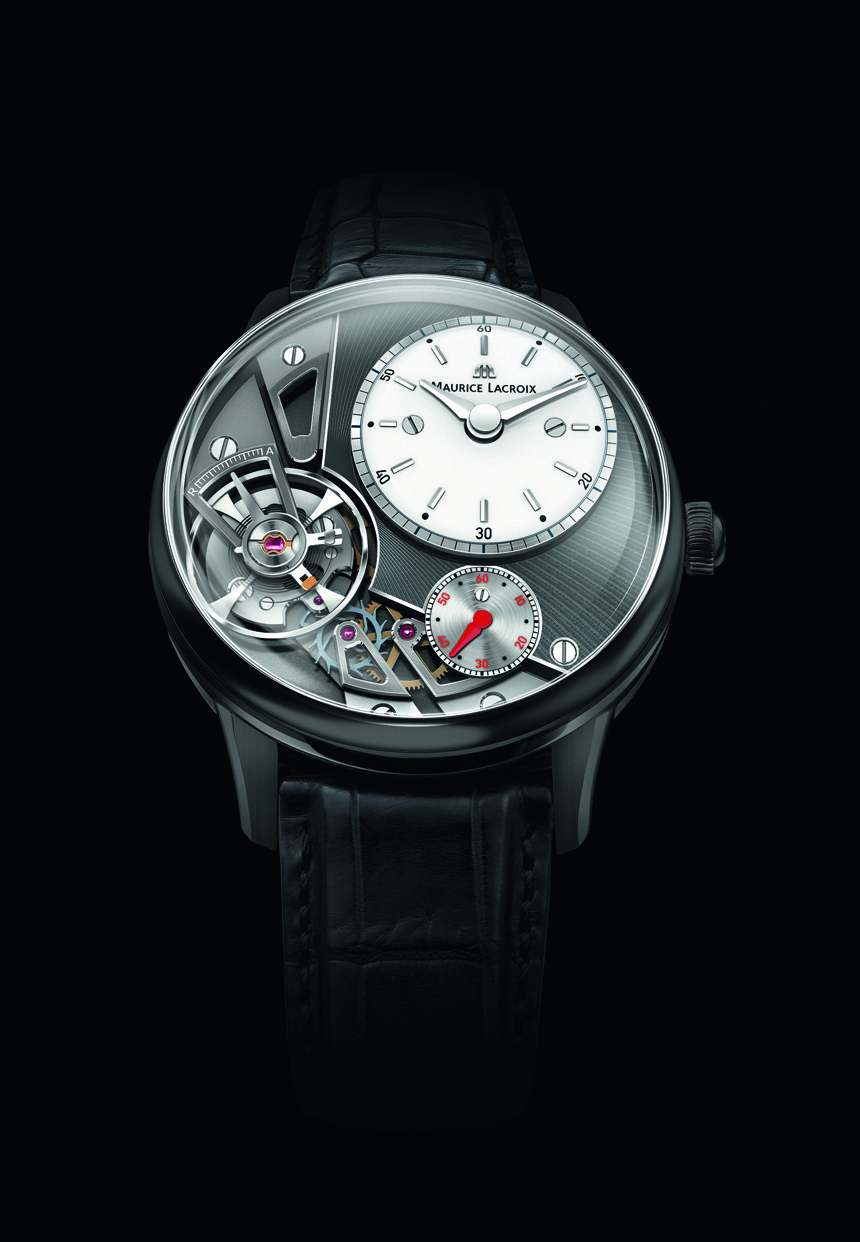 Beating at a relatively slow 18,000 bph (2.5 Hz), the large balance wheel and blue (silicon) escapement lever and wheel are prominently displayed on the face of the watch. Another visual treat is the regulation markings on the balance cock. Too often watches have a mismatch of fonts and hand styles spread across their face. Notice that the seconds hands and the numerals on the sub-dial (at 5 o’clock) match those on the main dial.

The red seconds hand and markings provide a nice bit of accent to an otherwise sober, but elegant set of dials and hands. The four cocks exposed on the front of the watch also share a single design ethic. There is nothing accidental or tacked on in the appearance of this piece. Even the exposed screws are consistent and appropriate. 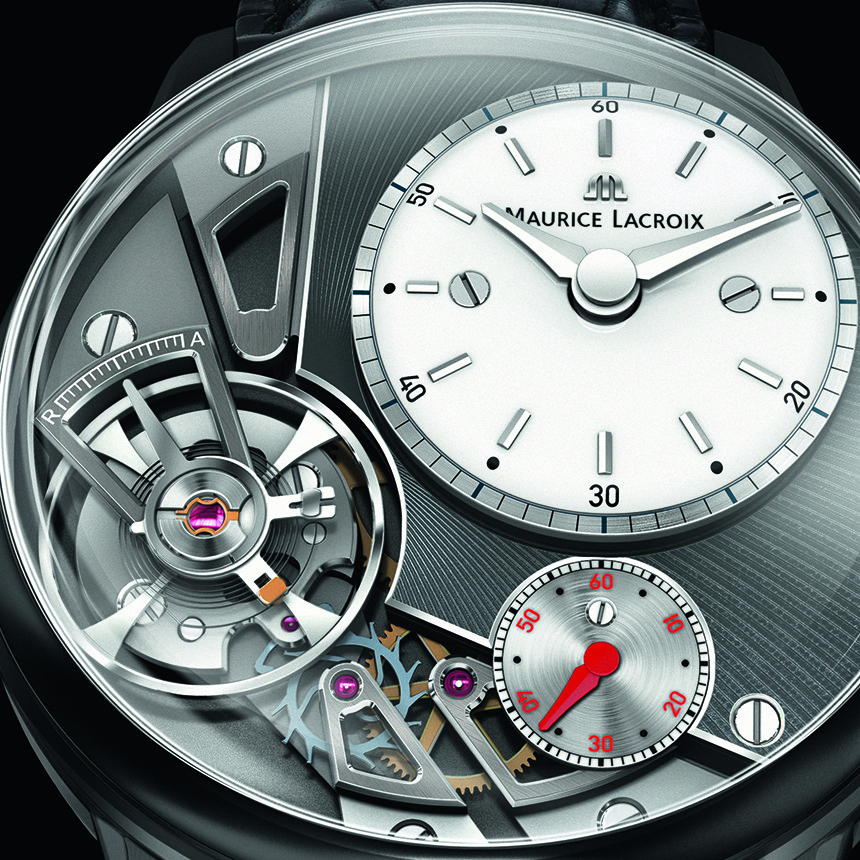 We will check this watch at BaselWorld 2014 next month and provide a hands-on review. Though we have a feeling that with its modern take on this traditional type of watch and 43mm wide case, it should prove to be a hit. When seeing it, we will also check out the machine-engraved 3/4 plate and report more about it and other aspects of this very cool addition to Maurice LaCroix’s Masterpiece series. It won’t be too cheap as the price is expected to be between 10,000 and 20,000 CHF. mauricelacroix.com