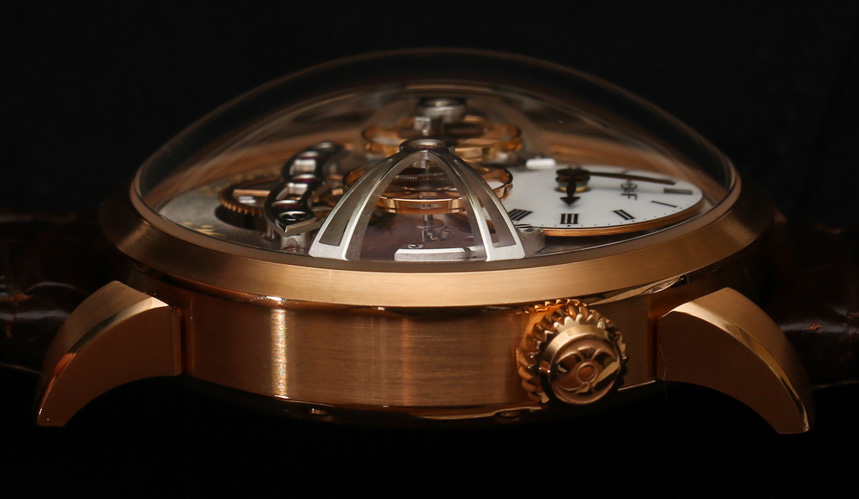 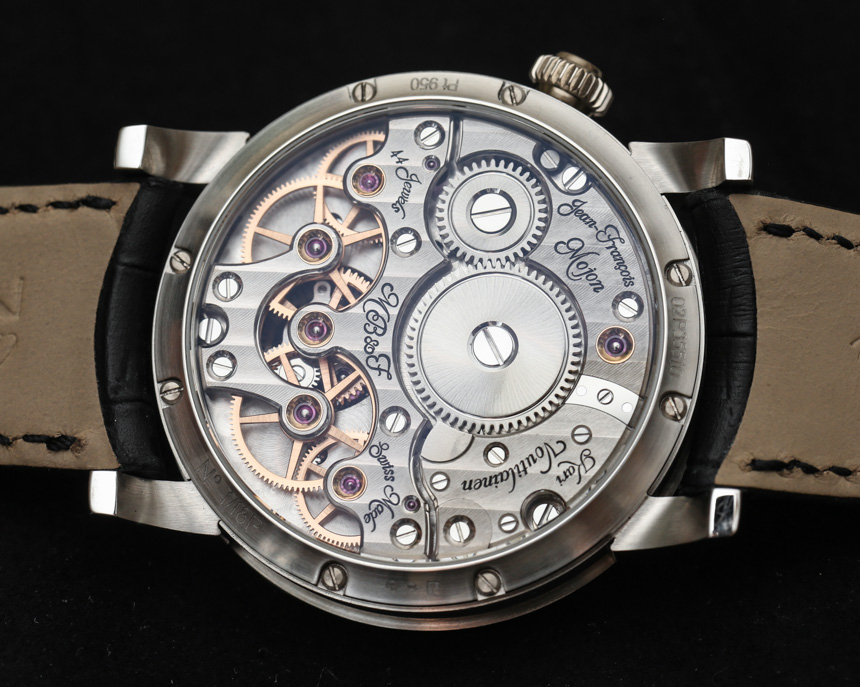 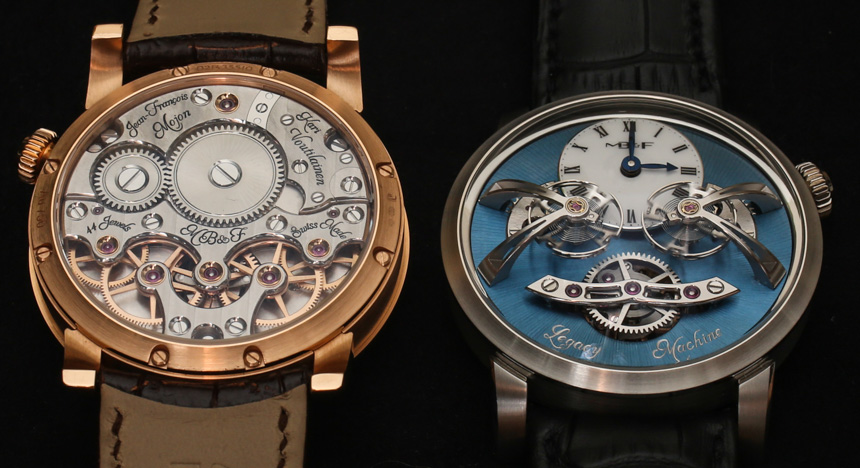 It is worth noting that there were a few different types of dual balance wheel watch creations. The type used in the LM2, that uses a differential between the balance wheels, is probably the most modern. The movement in the LM2 (and LM1 for that matter) was designed by Jean-Francois Mojon (and his team at Chronode). Using traditional techniques and some vintage flair, he designed an incredibly beautiful movement with hints to the past done in ways you rarely see today. A good example is the use of cursive text on the bridges of the movement – which is incredibly rare to see today as most brands prefer easy to read print-style lettering. As much as possible, the movement is symmetrical (a good thing), and it has about 45 hours of power reserve.

Just as Mr. Mojon came back to work on the LM2 for MB&F, so did Mr. Kari Voutilainen for the decoration of the movement. A master watchmaker with his own highly-respected brand, Voutilainen is there to ensure the LM2 movement looks fantastic. It surely does. A wealth of classic polishing and other finishing techniques allow the LM2 to really have that regal high-end feel. What really separates the men from the boys in this industry isn’t ideas or risk taking, but rather decoration and finishing. The best ones know how to use the most appropriate resources possible when it comes to making their designs on paper look amazing in real life. While MB&F isn’t the only brand that uses outside help on their watches, MB&F is among the few who openly do so. As such, you’ll see both Jean-Francois Mojon’s and Kari Voutilainen’s names on the movement of the watch. If anything, MB&F understands the power (and need to create) horological superstars. 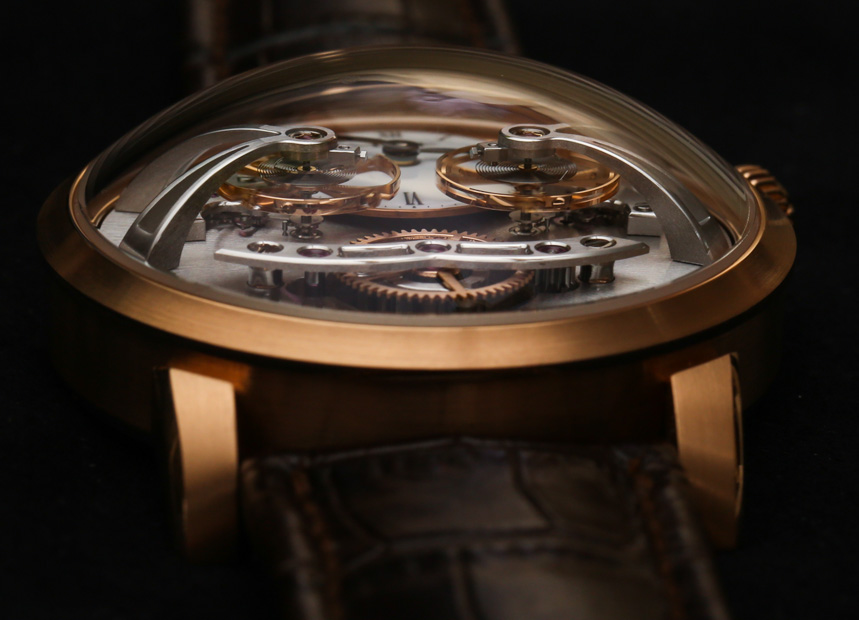 A common question when it comes to movements such as this, whose purpose it is to enhance accuracy is…. does the movement actually enhance accuracy? Would you believe me if I said it doesn’t really matter? Features such as dual balance wheels, constant force escapements, tourbillons, and a few others like them were developed as a means of attempting to increase the performance and/or accuracy of mechanical watches. Despite massive efforts to design new and interesting watches with these complications,  no one ever seems to discuss whether or not these elements are helping in any real way.

Watch lovers, who tend to obsess over everything, do not, by and large, obsess over accuracy (well, some do). We more-or-less forgive mechanical watches for not being as accurate as their less expensive and much less interesting quartz cousins. Mechanical watches are machines that we can see and appreciate with our own eyes. There isn’t microscopic atomic work responsible for how it tells the time like there is in quartz watches, but rather pieces you can see in action. This is why so many people love mechanical watches – because their mechanics are not invisible to us. So for that reason we prefer mechanical watches, and are furthermore interested in being able to see beautiful watch movements in action, rather than expect performance from them that is easily available elsewhere. What watch lovers want from a good mechanical watch is a fine example of mechanical art and engineering in action. Great performance is certainly appreciated, but there is a lot of compromises we will forgive due to our passion for timepieces. Just look again at those perched balance wheels hanging over the dial under that protective dome… 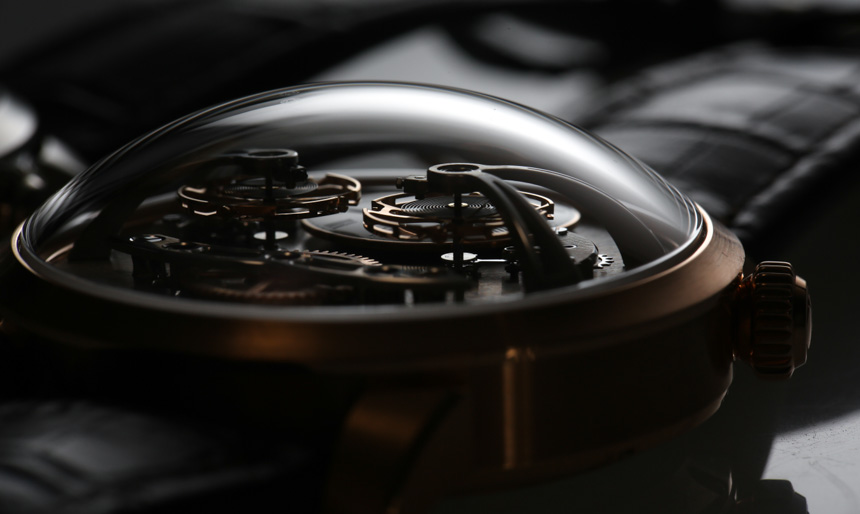 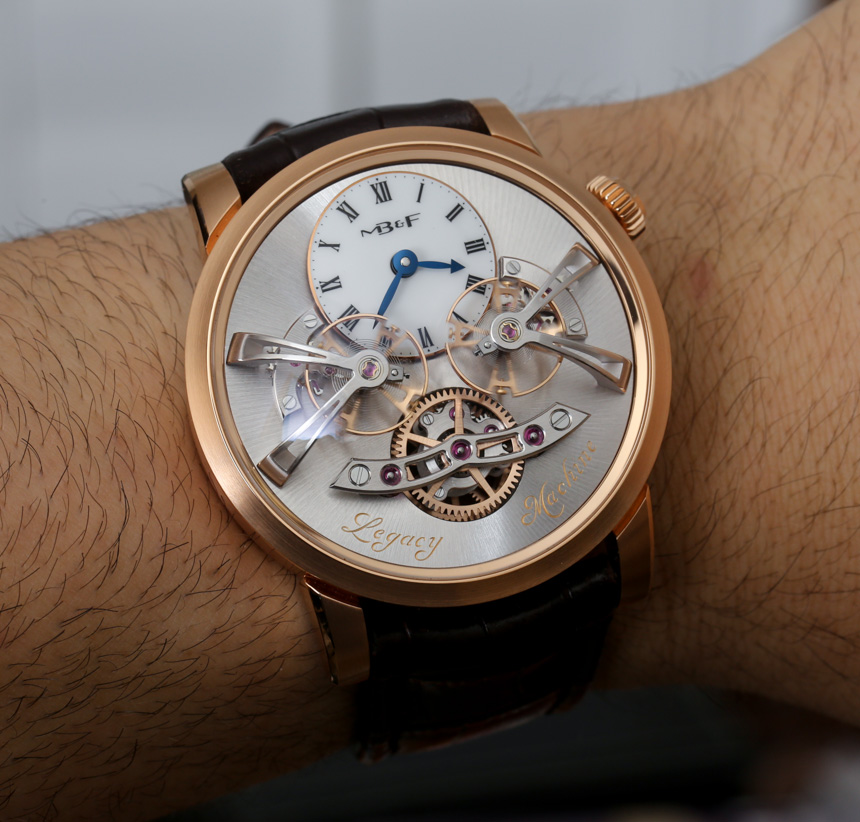 On the wrist, the Legacy Machine No. 2 is comfortable and even at 44mm wide is still among the smaller things that MB&F has produced. As we’ve stated about the LM1, this is the most wearable watch MB&F has ever made. It is a tall watch though. At 20mm high, the LM2 isn’t the type of piece that eagerly slides under sleeves. Then again, like a blonde in a mini dress, this isn’t something that has any desire to be hidden or tucked away. So if you want a demure watch for the day, it is probably best to pick something else. Details on the case are wonderful. It isn’t a complex design, but it is a very satisfying one.