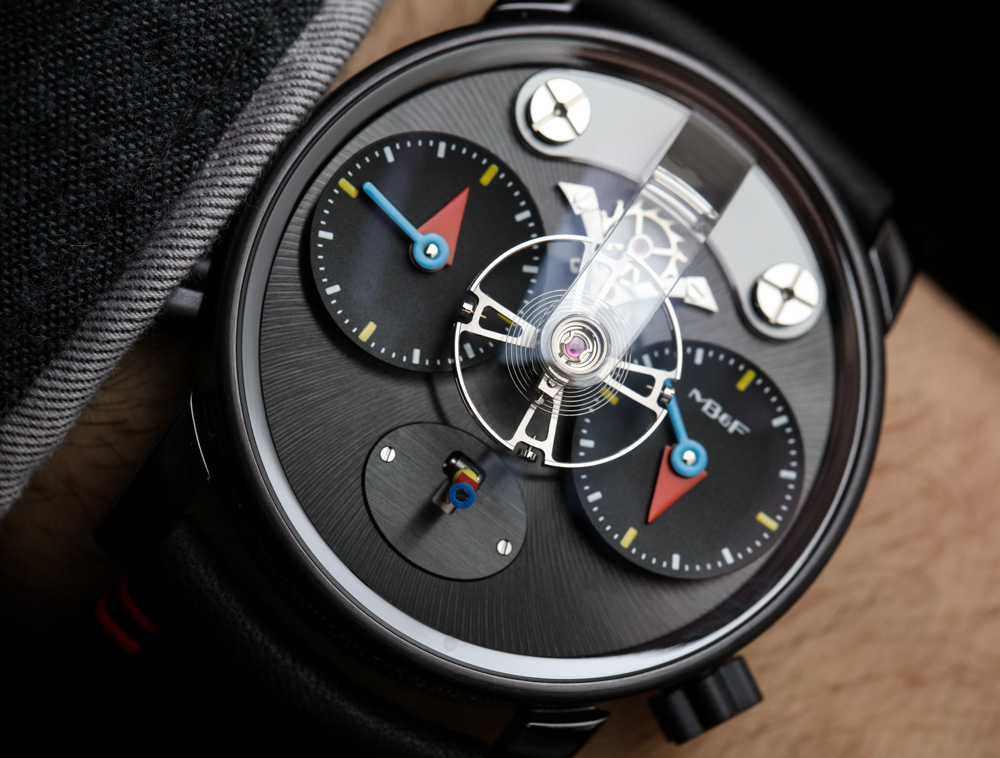 For 2016, MB&F releases the new limited edition LM1 Silberstein as a set of three different watch models. This is a variation on the popular MB&F LM1 which was originally debuted in 2011 (here), as well as one of two “performance art” watches introduced by the brand this year which also include the MB&F HMX Black Badger (hands-on here). “Performance Art” watches from MB&F are those which are produced in collaboration with another person such as an artist or other watch designer. The MB&F LM1 Silberstein was made with watch designer Alain Silberstein, and interestingly enough (as far as I recall), represents the first time MB&F has done a Performance Art watch with the same person twice. 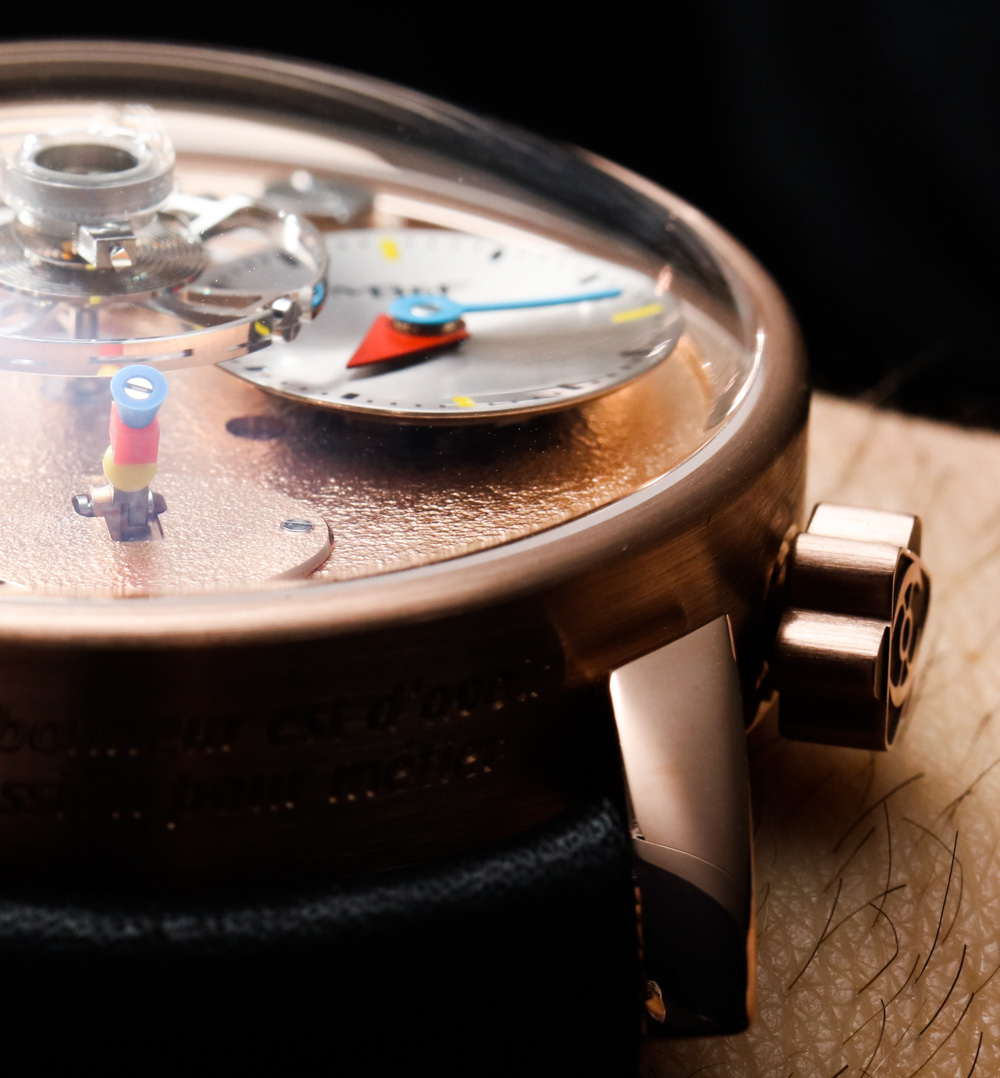 The economic crisis of a few years ago was likely to blame for Alain Silberstein‘s eponymous brand to be mothballed. Still, aBlogtoWatch receives a surprising number of requests from people around the world wondering if Alain will bring his brand back. His unique “playful” take on design is a signature element of the French designer’s signature aesthetic, as are his use of primary colors and geometric shapes. Alain as a person is both opinionated and gregarious, and in my opinion, deserves a lasting seat as the “watch industry design table,” so it makes me happy to see his continued work in the sector. 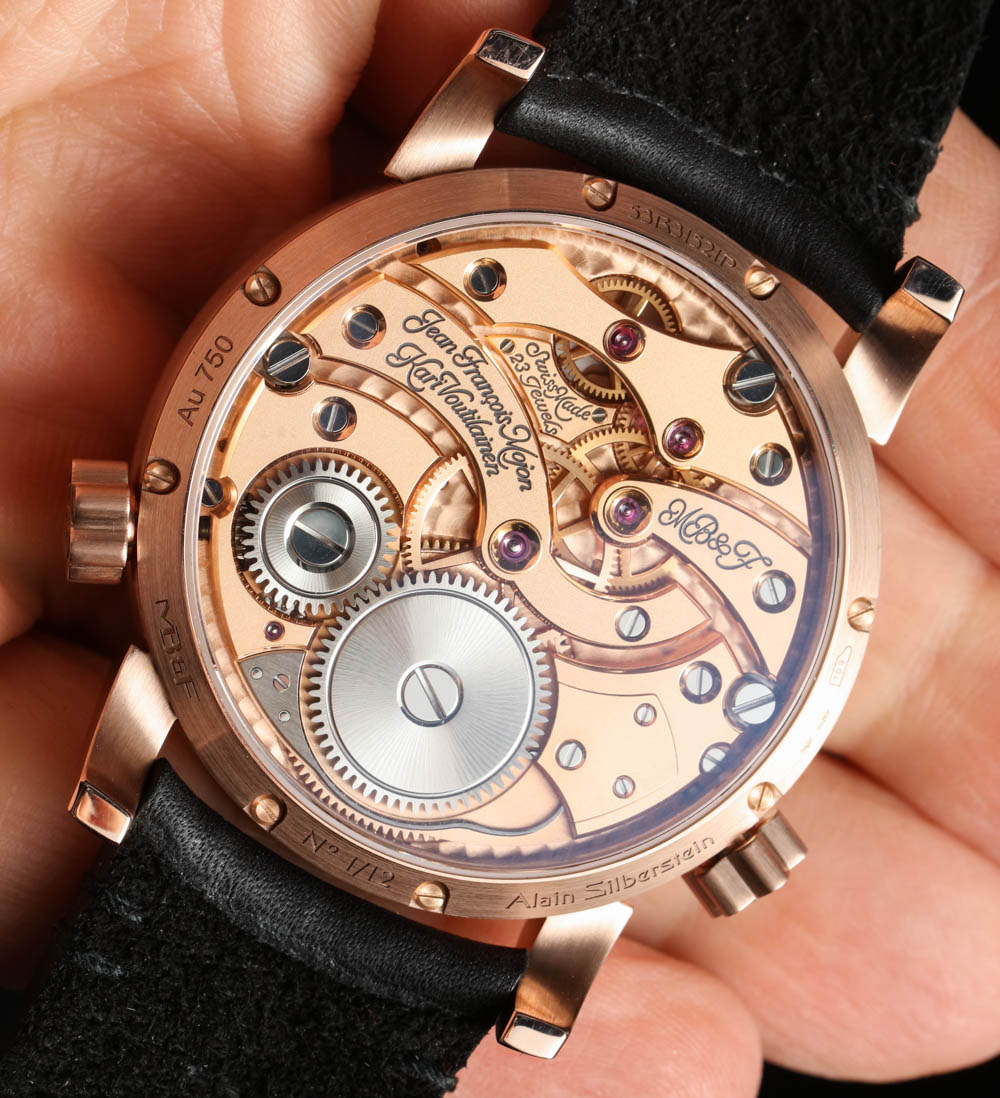 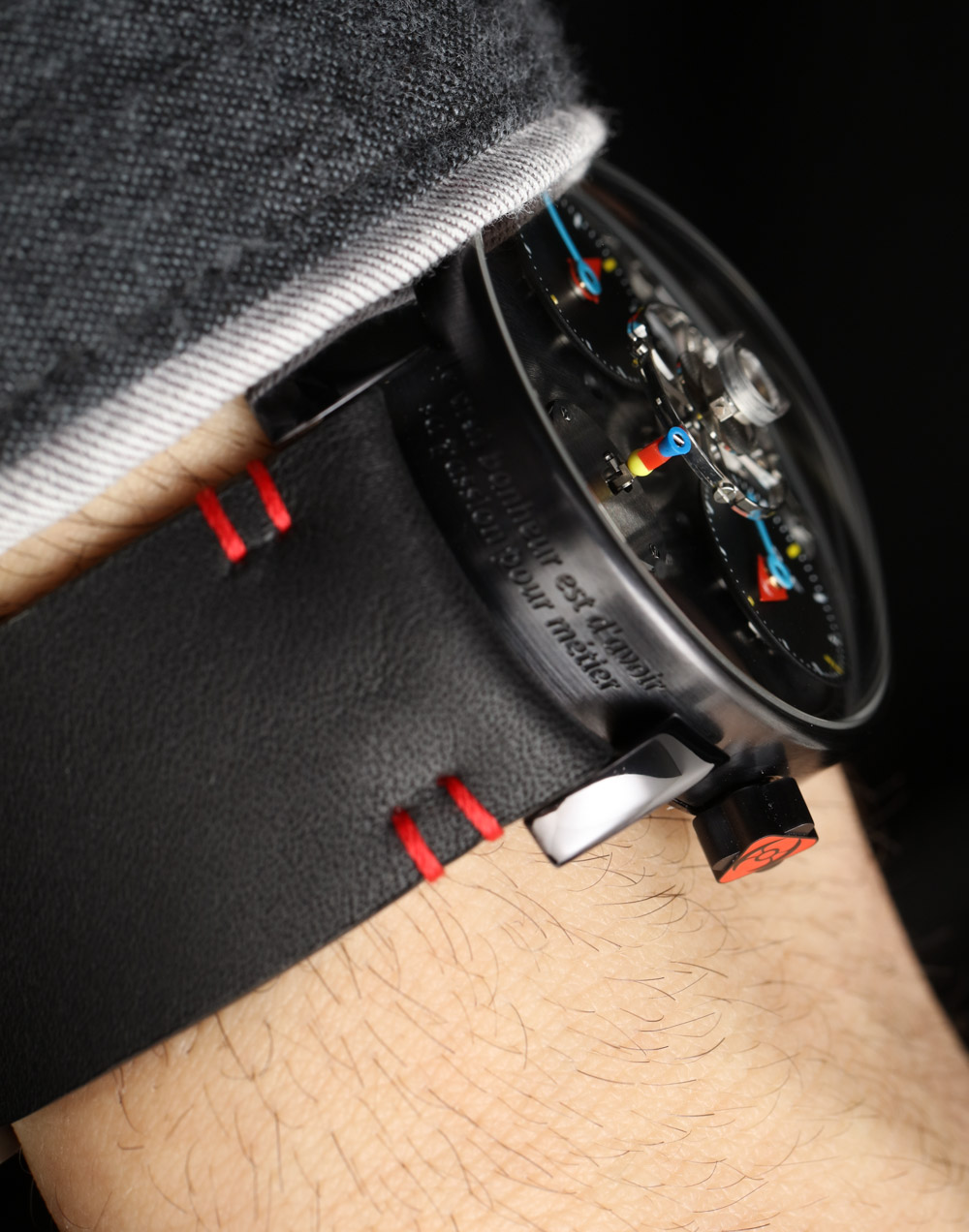 The first MB&F Performance Art watch done with Alain Silberstein was the HM2.2 Black Box which debuted in 2009 (here). It was a variation of the Horological Machine 2, and in many ways my favorite of the HM2 watches. I was able to get some hands-on images of the HM2.2 Black Box watch here. Alain’s treatment of the HM2 was pretty radical at the time, and collectors of both MB&F and Alain Silberstein timepieces were keen on the watch. 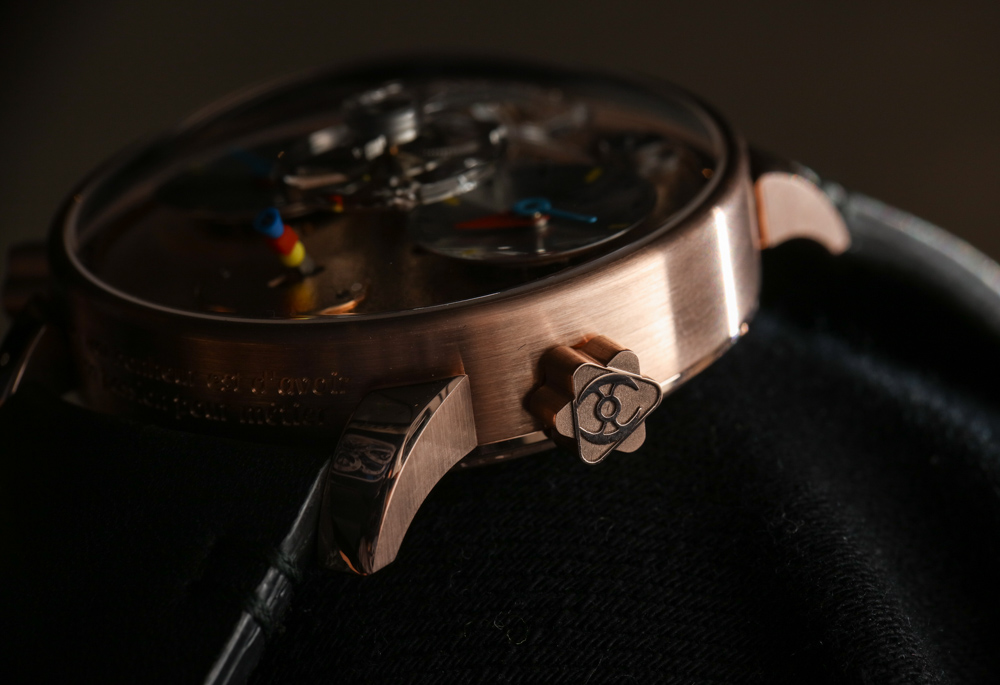 Now about seven years later, MB&F and Alain Silberstein are back, this time with something from the Legacy Machine collection. The LM1 serves as a base for the MB&F LM1 Silberstein which uses the same movement, and overall case design, but with different finishing treatments, case size, and of course, dial design. The case is a bit smaller in diameter, but that is actually due to the bezel size. Moreover, the MB&F LM1 Silberstein will be offered in three versions. Two of them will have a titanium case, and one will have an 18k red gold case. 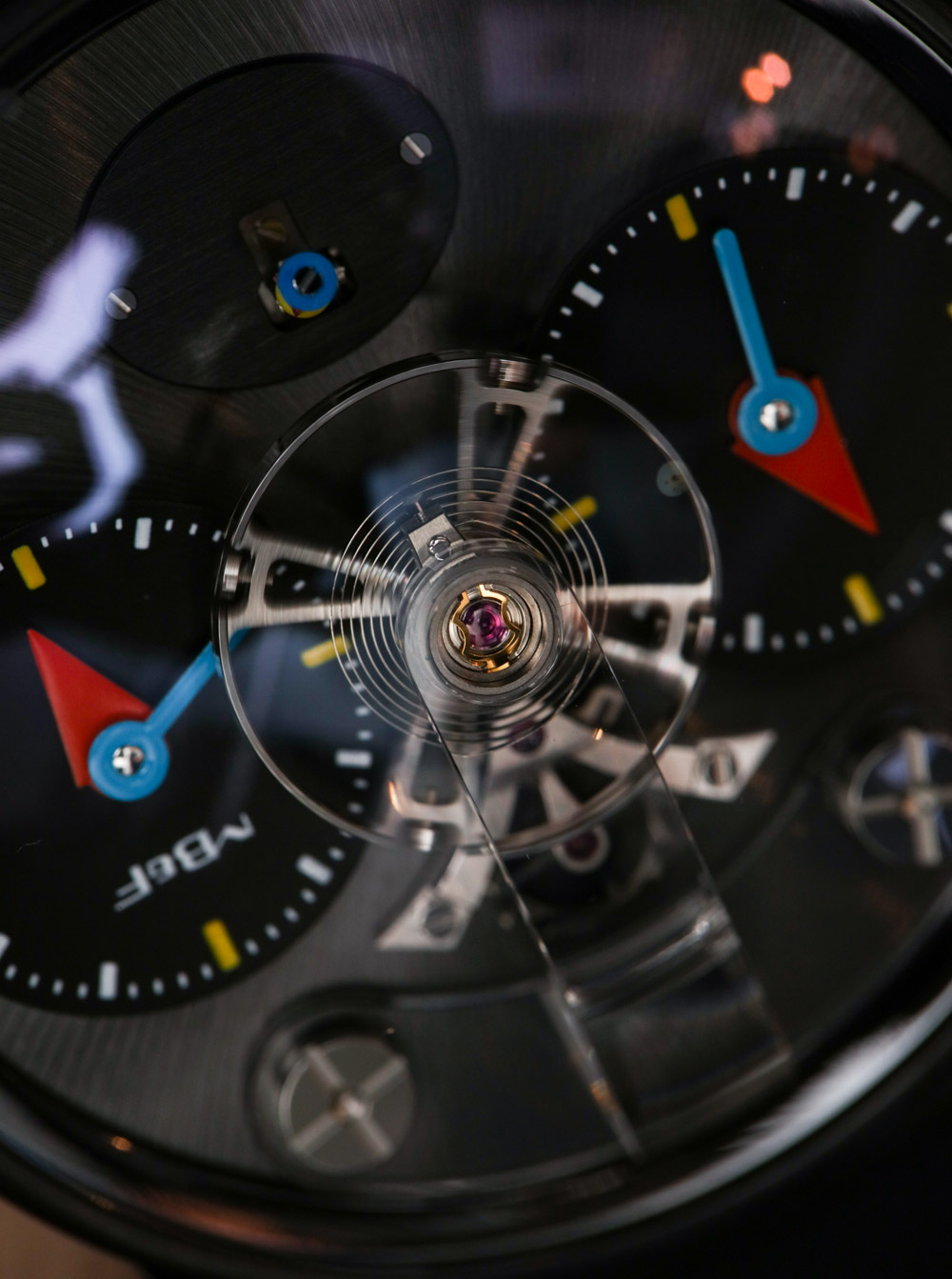 Only recently did MB&F release their first LM1 watch in titanium (here), but the MB&F LM1 Silberstein comes in both natural and PVD-coated black titanium. The classic-looking “legacy machine” collection clearly is meant for precious metals, but in titanium, it makes a solid case for itself, depending on the overall finishing. These MB&F LM1 Silberstein watches certainly are the most playful of the LM1 watches and include all of the prestige of the LM1 in a more casual skin. 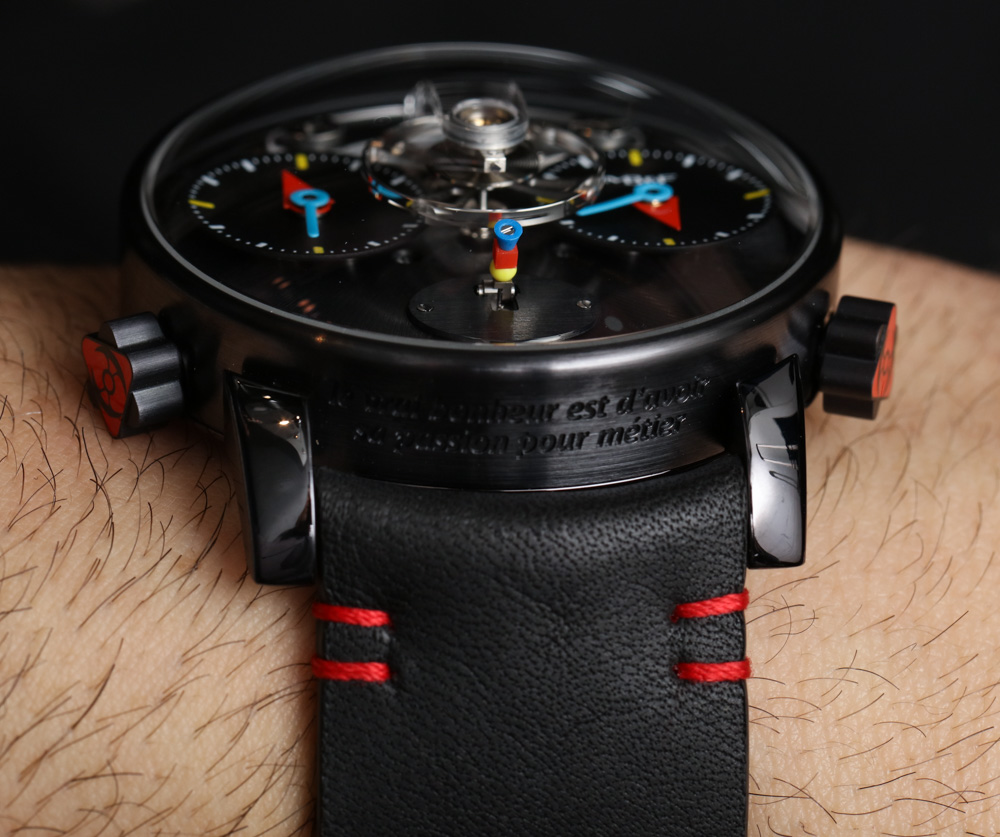 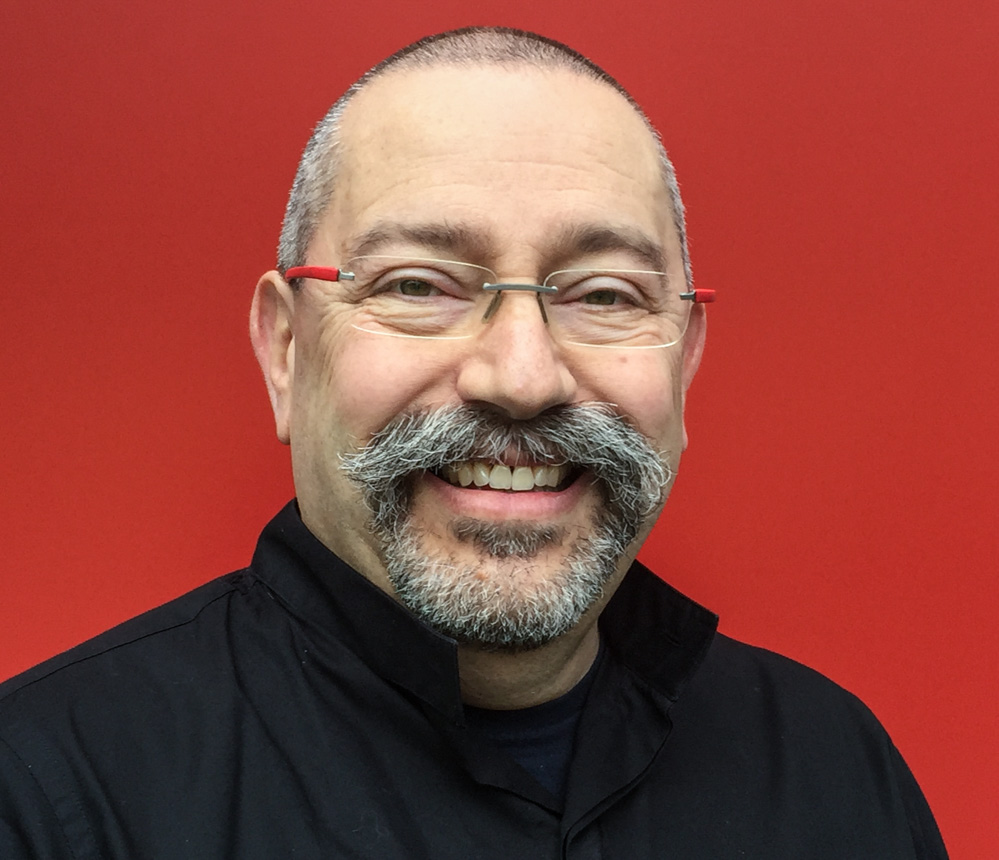 Technically, there aren’t really any changes from the standard LM1 to the MB&F LM1 Silbertein. You still have a Jean-Francois Mojon-designed and Kari Voutilainen-finished manually wound mechanical movement that is produced from 279 parts, operating at 2.5Hz (18,800bph), and with a power reserve of 45 hours. Functionally, the movement is designed to have two totally independent (in terms of setting the time) dials for the face, as well as a “linear” power reserve indicator. For aesthetic reasons, the large balance wheel was designed to sit above the dial itself on a sort of bridge. Typically produced from metal, the balance wheel bridge on the MB&F LM1 Silberstein is now produced from a piece of transparent sapphire crystal – which is pretty cool. 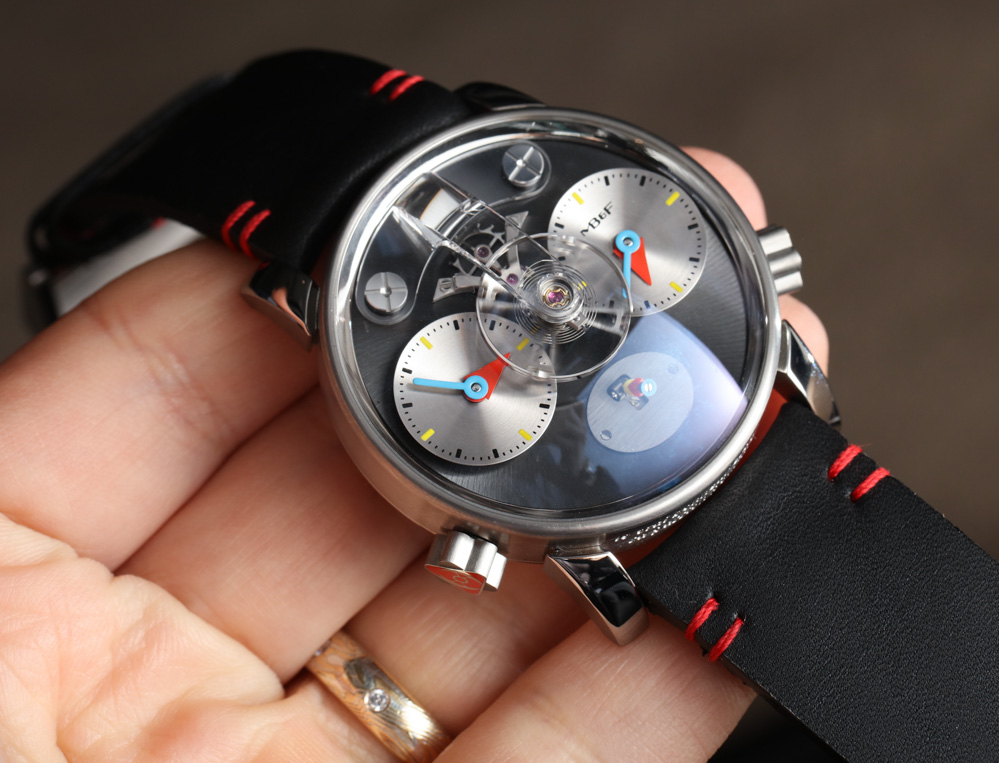 Another structural change to the watch dial are the two subdials for telling the time. They are convex and sit like small bowls on the dial. Inside of them are signature Alain Silberstein hands with a red-arrow hour indicator and a light blue minute hand. The screws used to secure the balance wheel bridge seem like something Alain would like, and the power reserve indicator rod is stacked with signature Alain Silberstein geometric shapes like a colorful shish kebab. 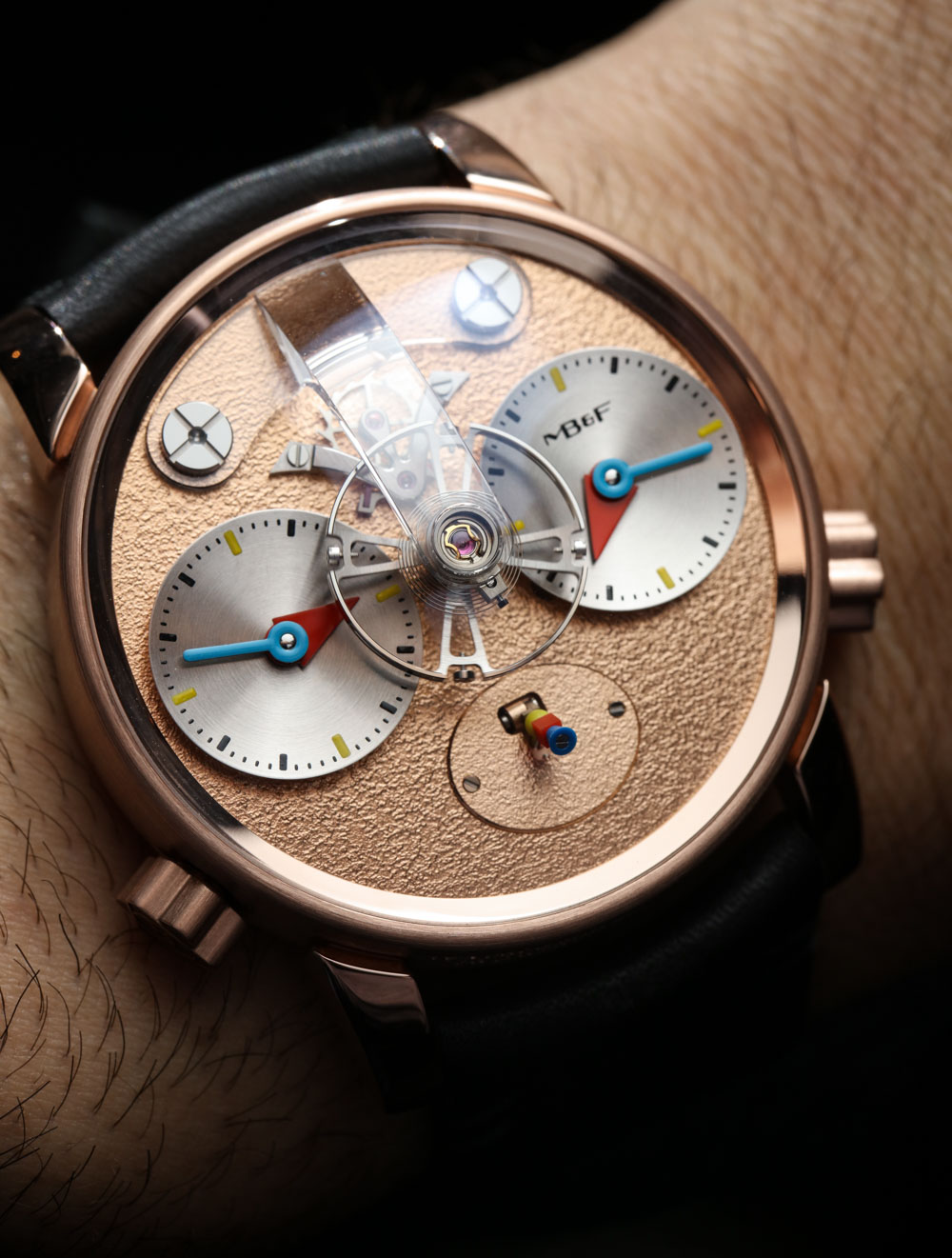 On the lower side of the case is a statement engraved into the case which is interesting in terms of how it reflects on the lives of people like Alain Silberstein. The quote is, “Le vrai bonheur est d’avoir sa passion pour métier,” which translates from French to English into “making a profession of your passion is true happiness.” The quote is attributed to Gustave Flaubert and is a telling remark on the efforts of many independent watchmakers who both succeed and fail at making a living from their passion. I, as well, can immediately relate to this sentiment. 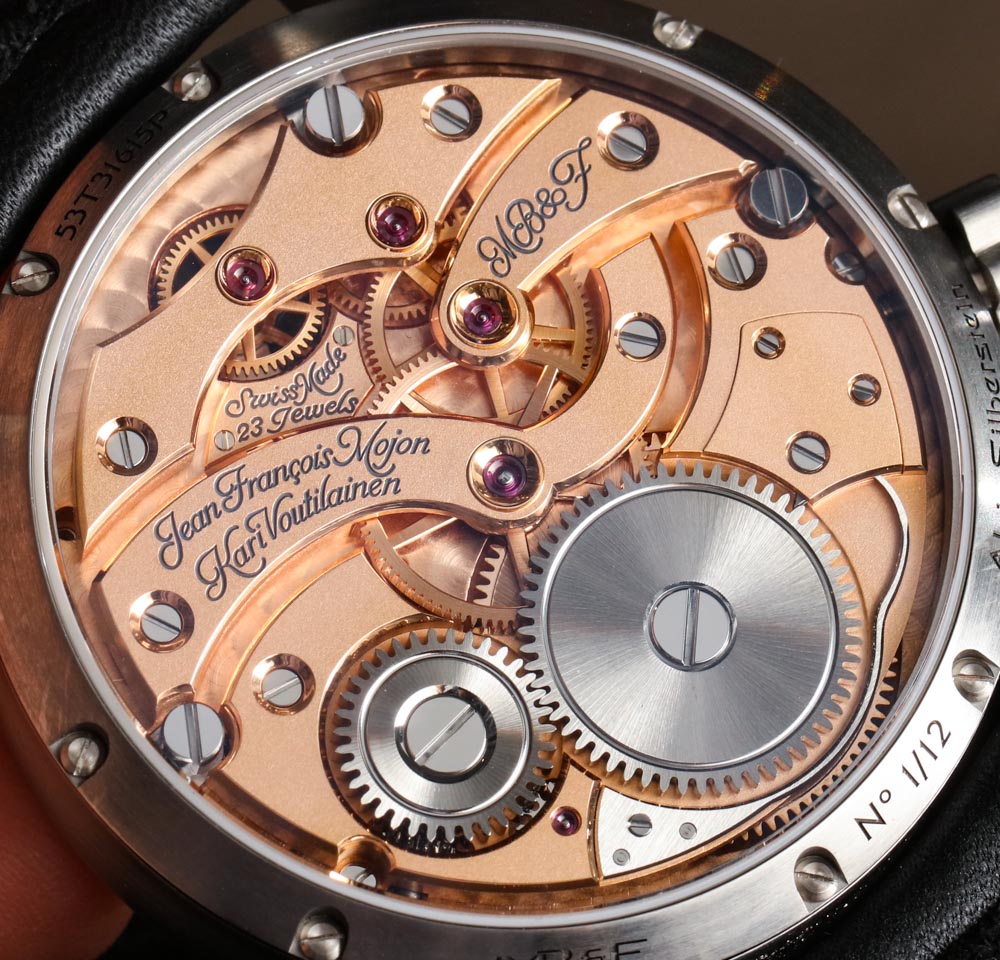 On one hand, the statement is charming and friendly, and you can leave it at that. On the other hand, you can choose to read into the statement more deeply, understanding the context of what it means to be an independent watch maker in this day and age. These people are artists, first and foremost, which is important to consider because what they produce is purchased for fun, not utility. The struggle of an artist is no less real now than it was in the past, and thus being able to make your passion in to a profession is not usually a one-time endeavor, but rather an ongoing battle whose continued success should not only be noted, but also celebrated from time to time – hence the importance of embellishing the products of one’s work with sentimental statements such as this. 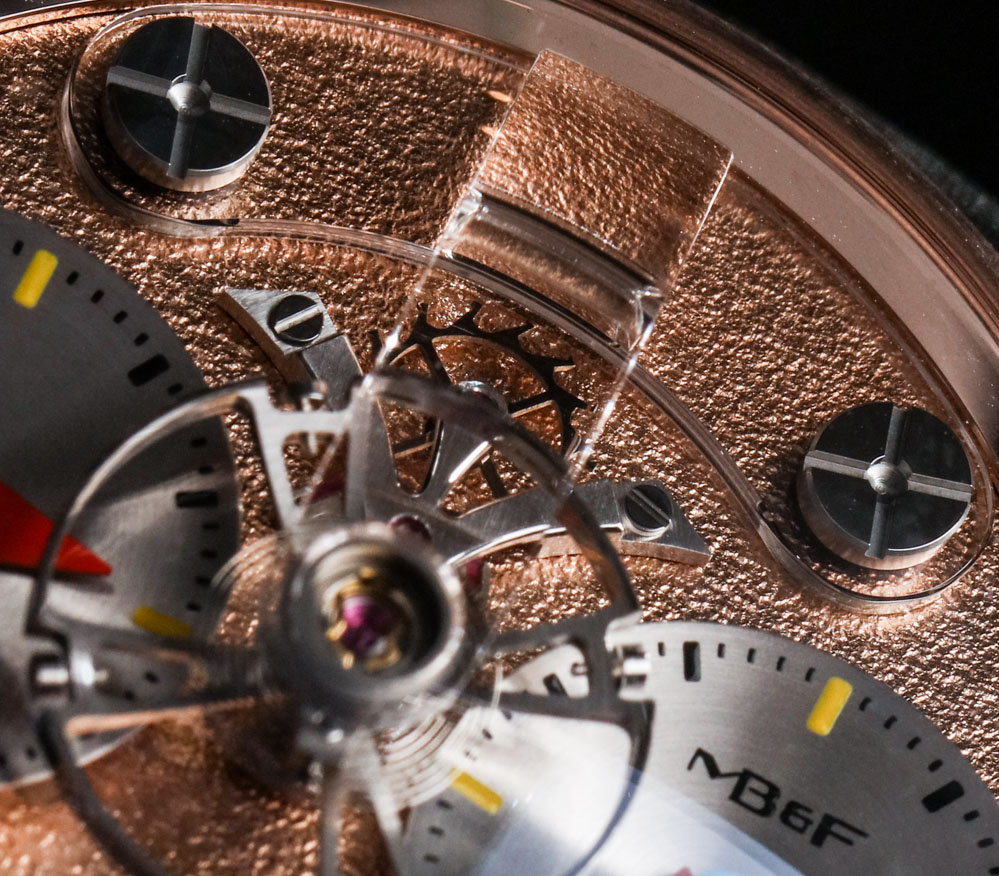 The 18k red gold version of the MB&F LM1 Silberstein has quite a different look than the titanium models. In addition to the gold case and dial, the dial is produced with a texture unlike the “circular sun-ray” dial finishing of the titanium models. More expensive than the titanium ones, I feel that this model in many ways is much more expressive – but not everyone wants that. Silberstein was further able to make the inherently classic-looking LM1 watch into something more modern-looking, which of course is ironic since the base timepiece is supposed to be a “Legacy Machine” compared to the more modern MB&F Horological Machines. 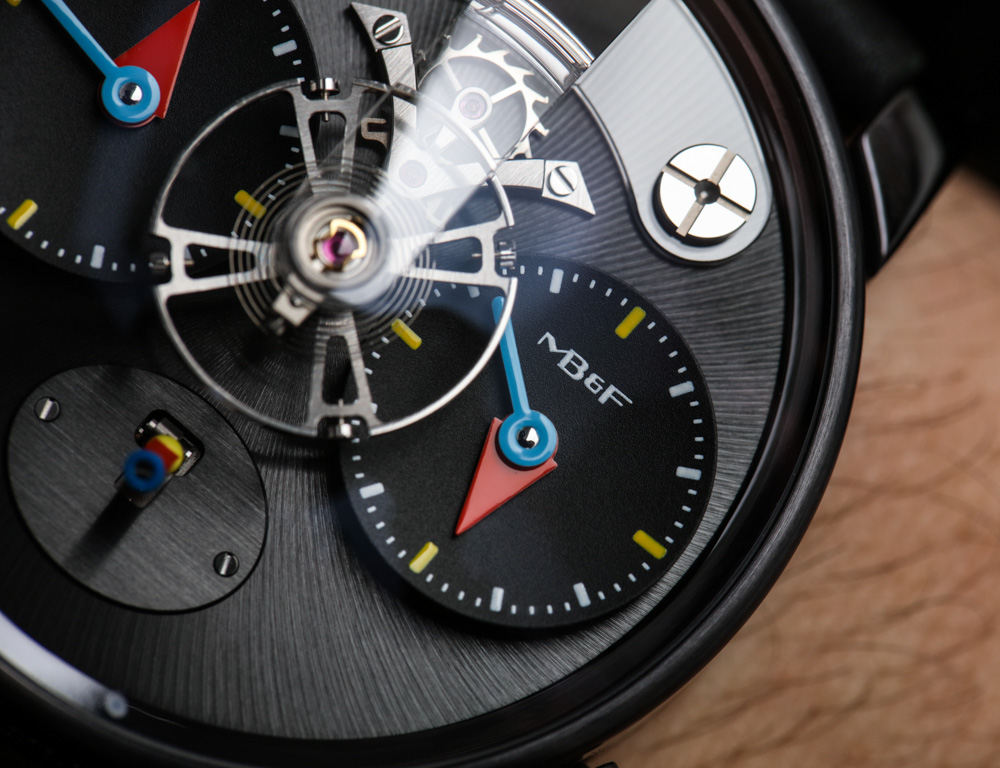 The LM1 case is 44mm wide, while the MB&F LM1 Silberstein is 42.5mm wide (and 17mm thick) being water resistant to 30 meters. Again, this is due to the more narrow bezel width. The top sapphire crystal is dramatically domed, and attached to these special MB&F LM1 Silberstein watches are black calfskin straps with matching stitching to go with the particular version of the watch.

It is great to see Alain Silberstein doing watch things again, and I hope to see more. I think it is very telling about him as a designer and watch personality for MB&F to work with him again on a limited edition watch project. Each of the three versions (titanium, black titanium, and 18k red gold) of the MB&F LM1 Silberstein will be limited to 12 pieces – which means a total collection number of 36 watches. Price for the MB&F LM1 Silberstein is $83,000 USD in titanium and $92,000 in 18k red gold. mbandf.com