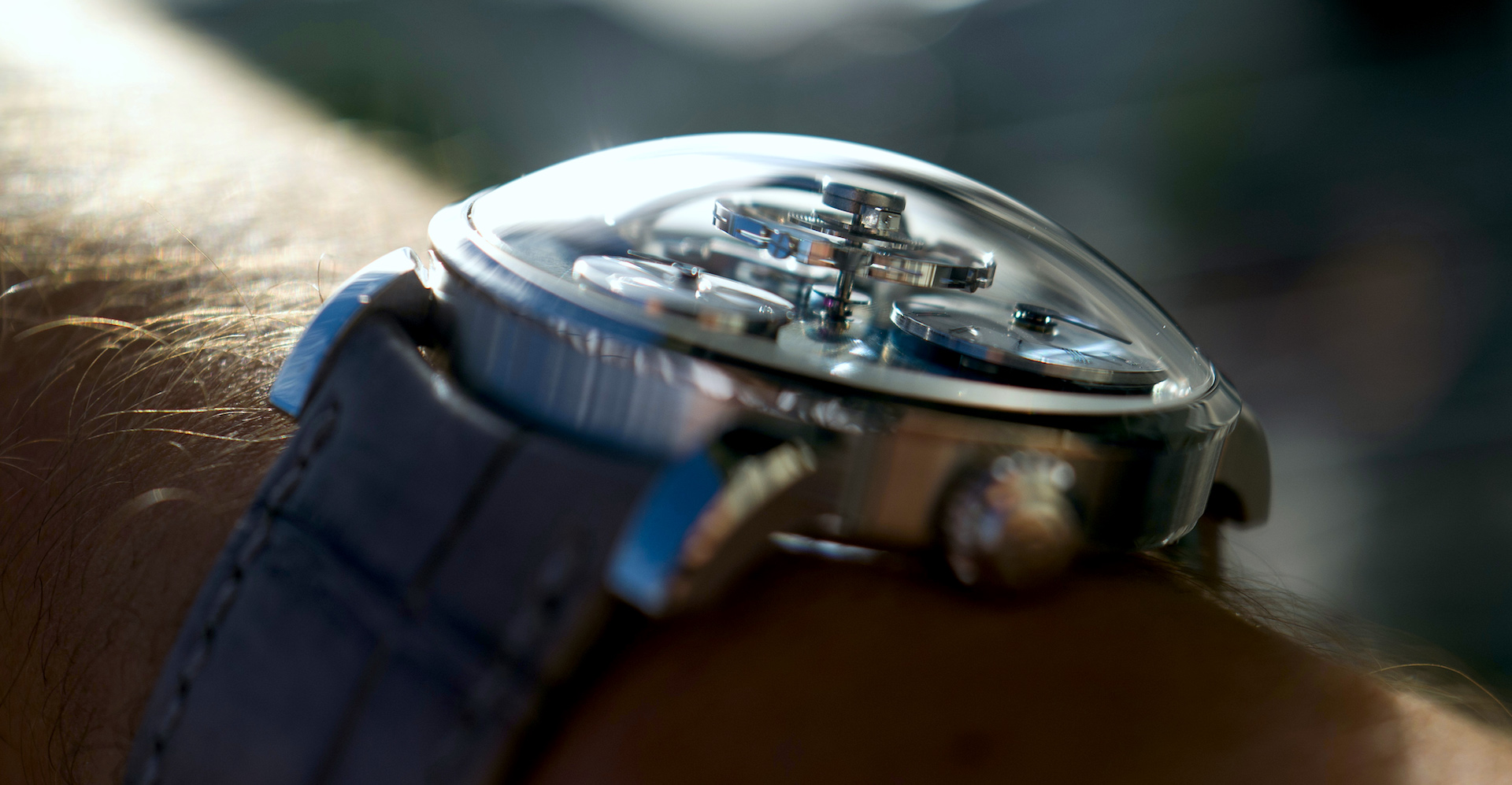 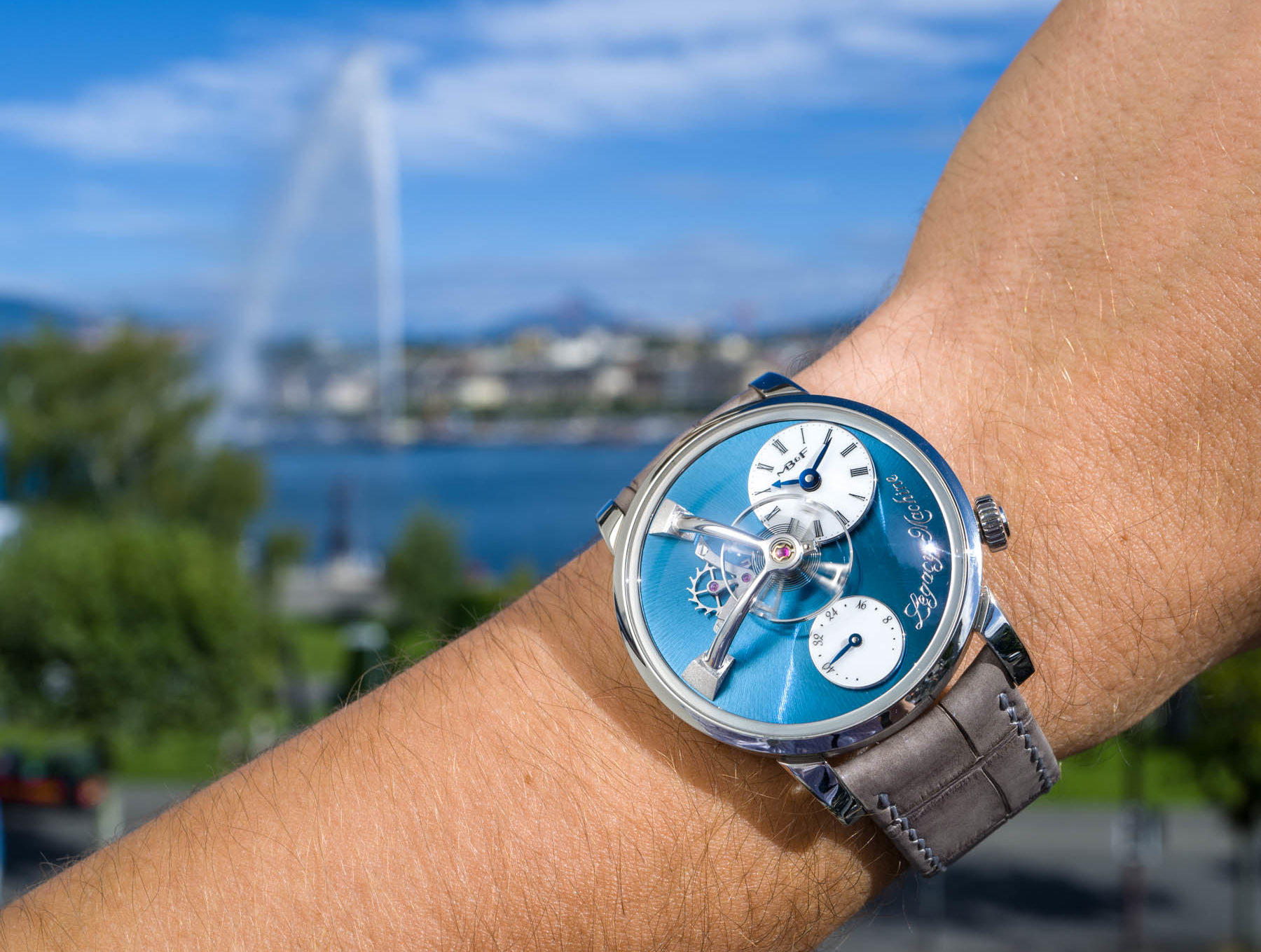 A pioneer of creative watchmaking solutions, MB&F now offers its own unique take not just on fine mechanics, but also on e-commerce — a boring word for the online sales of some of the most exciting watches of this century. Today, we’ll tell you more about the execution of the brand’s novel concept and show one of the exceedingly rare pieces available right now: the very last available MB&F LM101 in platinum, number 33 out of 33 ever made. 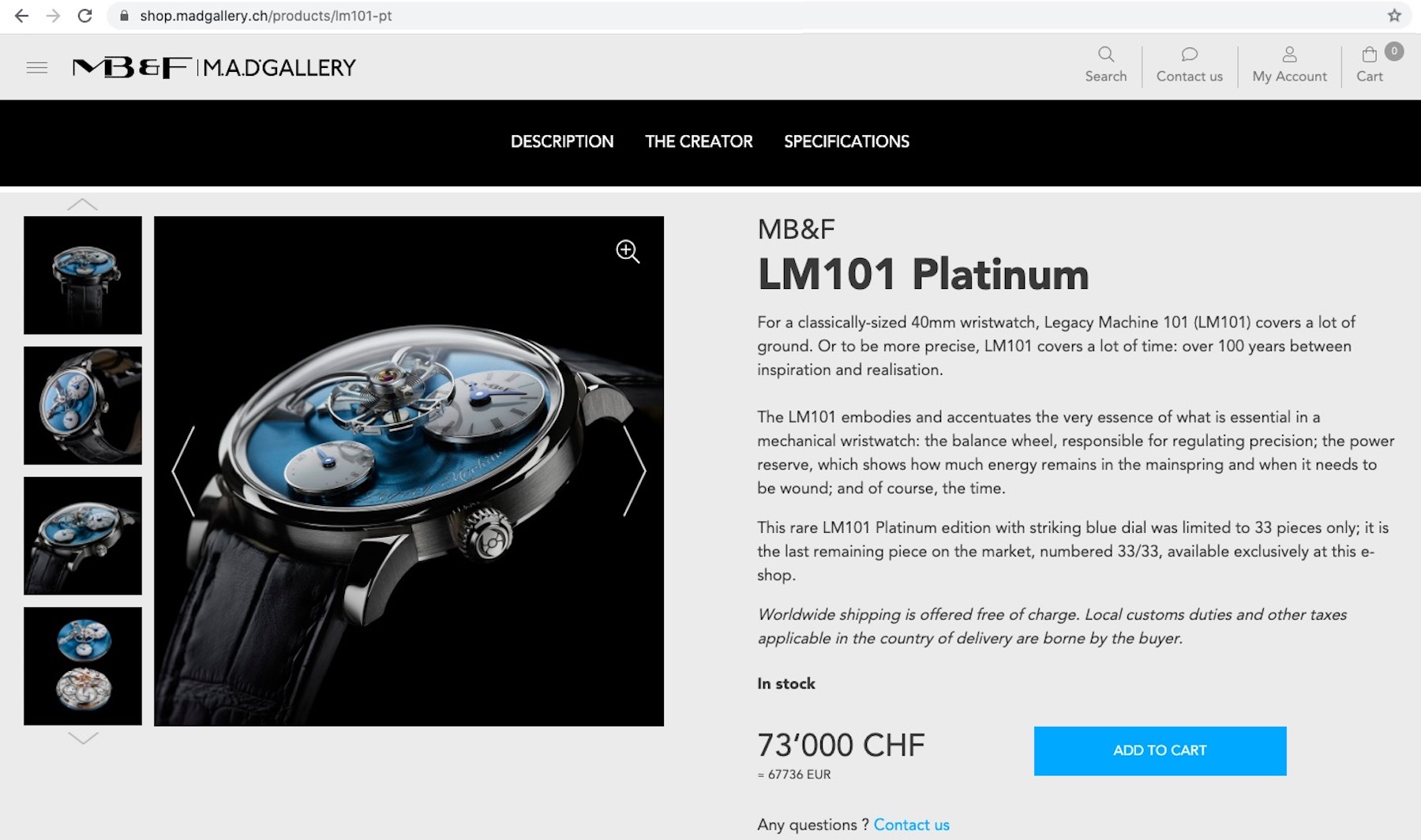 The Legacy Machine 101 is a heartwarming tribute to the past — but the way you can acquire the last one in platinum is very much a look into the future. Beyond the obvious, the last few months have posed new challenges for companies across industries and the world, forcing them to rethink their daily operations. At MB&F, this involved finding new ways to stay close to clients without being physically present. To put the scale of the problem into perspective, 24 of the brand’s 27 global points of sale were closed due to obvious circumstances, making an online platform essential to ensure the future of Legacy and Horological Machines. Beyond starting its own online store, MB&F added two notable twists to the usual e-commerce mix. First, it is not offering its entire range of timepieces simultaneously, but rather only features cherry-picked special examples, typically the last remaining iteration of a specific reference. Second, some of these pieces, although promoted on the MB&F e-shop, are picked in full transparency from official MB&F retail partners — like the HM3 Frog we’ll also be looking at shortly. In these instances, the e-shop simply acts as a convenient sales channel: The piece is delivered to the final customer by the official MB&F partner while MB&F takes no extra commissions or fees on these sales. 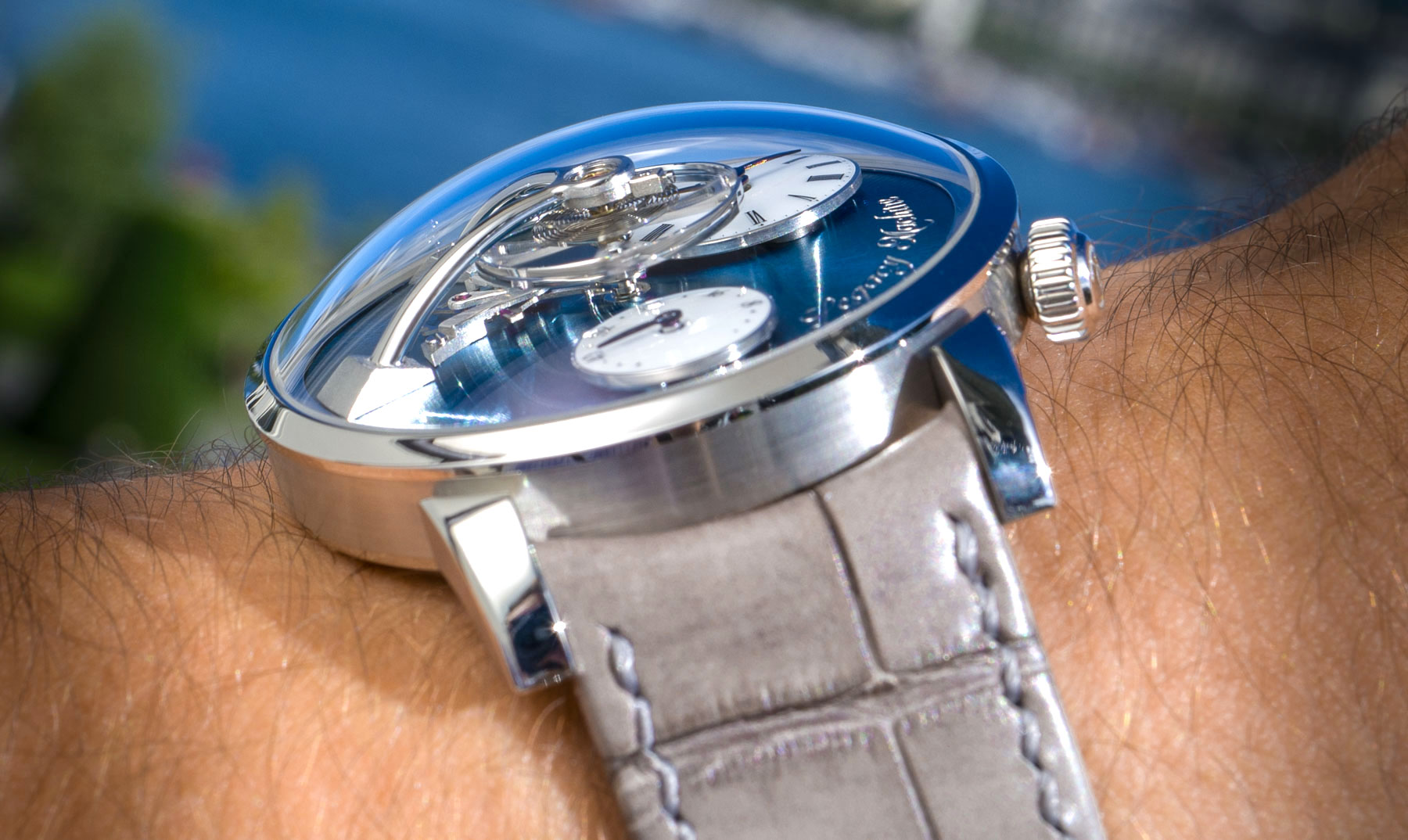 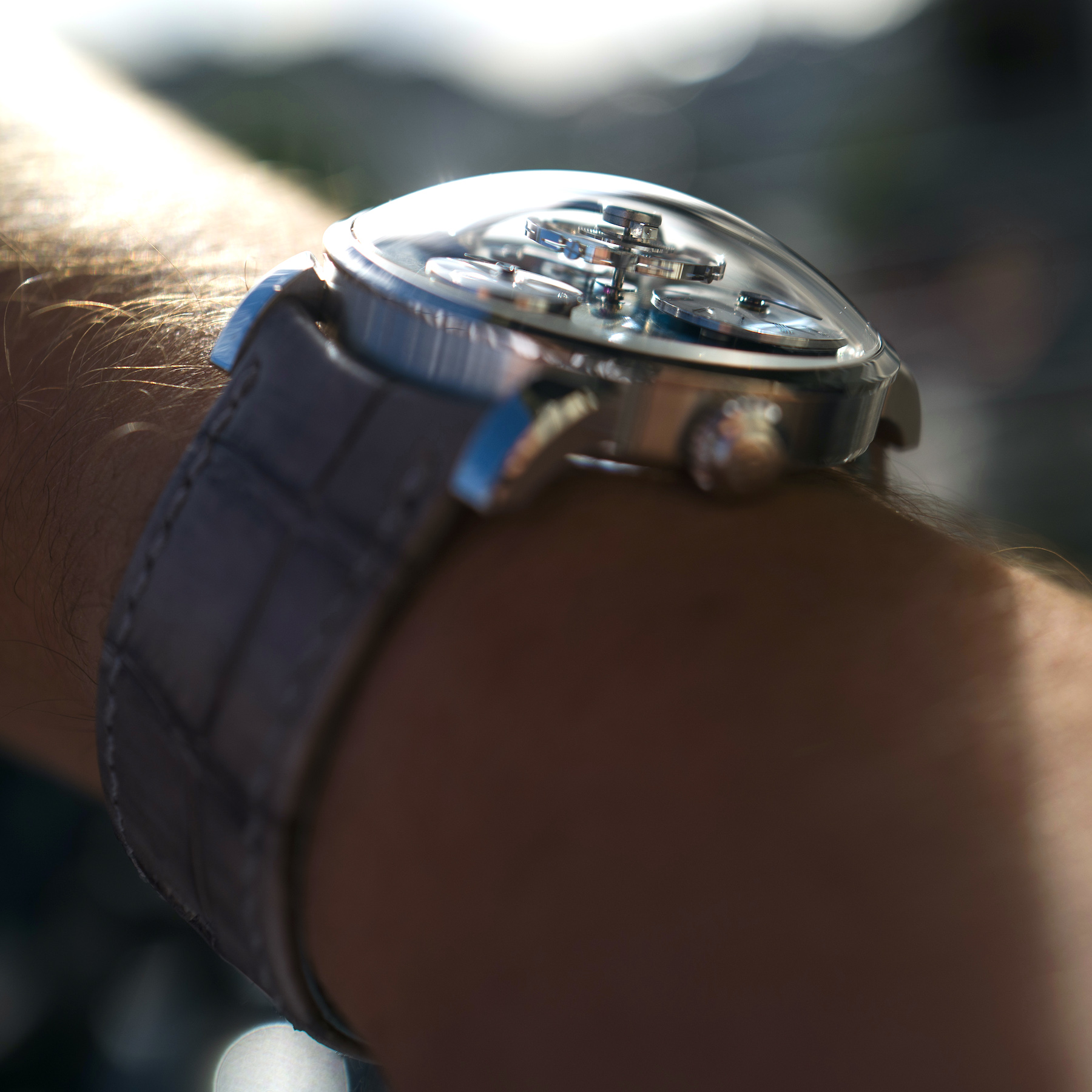 The Unique Feats Of A Legacy Machine

Ever since its original debut in 2011, the Legacy Machine has been cherished and collected for its typical-for-MB&F (and atypical for everyone else) way of paying tribute to olden watchmaking. Ditching the sci-fi and nature-inspired, untamed vibes of Horological Machines, the Legacy Machine repackages trademark MB&F madness into uncompromised elegance — and it’s no surprise the platinum version will always reign as king of that game. This isn’t to say that MB&F — specifically Max Büsser, Kari Voutilainen, and Jean-François Mojon — hadn’t torn up the rulebook with the Legacy Machine — because they absolutely had. The unique identifier of every Legacy Machine (save for the tourbillons) is the way it takes the balance wheel — the essence of a mechanical movement that serves as the foundation of most all watch enthusiasts’ affection — and places it at the center of attention. To some, it looks more like an exhibition than a functional piece, and that’s precisely the point: as though the two beautifully polished bridges lifted the balance wheel straight from within the movement, like a pair of mechanical hands, and offered it up for the best possible view and appreciation. 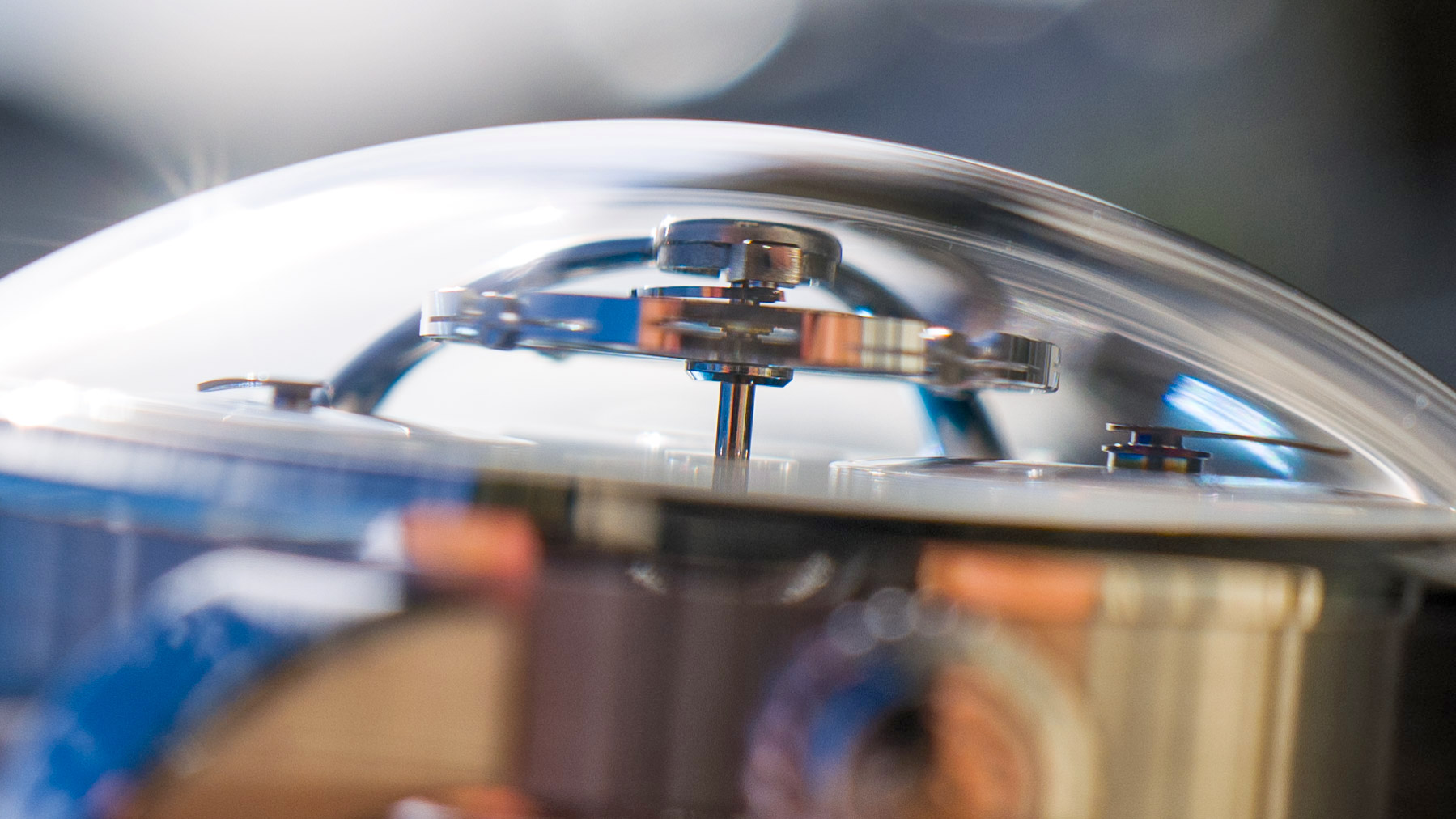 All photos are of the actual LM101 Platinum #33/33 that is available for sale at https://shop.madgallery.ch/

The uniquely domed sapphire crystal offers a side view like no other in a mechanical watch, revealing the balance staff that secures the ultra-wide, 14mm balance wheel. Its four adjustable moment of inertia screws — recessed into the periphery to reduce inefficiency caused by aerodynamic drag — can be seen for a passing moment every time the balance wheel reaches the end of its semi-oscillation phase, just before it is quickly propelled back in the other direction by its hairspring. A yet closer look reveals the Breguet overcoil of the spring — again like you have never seen it before — as it curls up and above the plane of the frantically dancing balance wheel. It really and truly is exceptional watchmaking on full display. 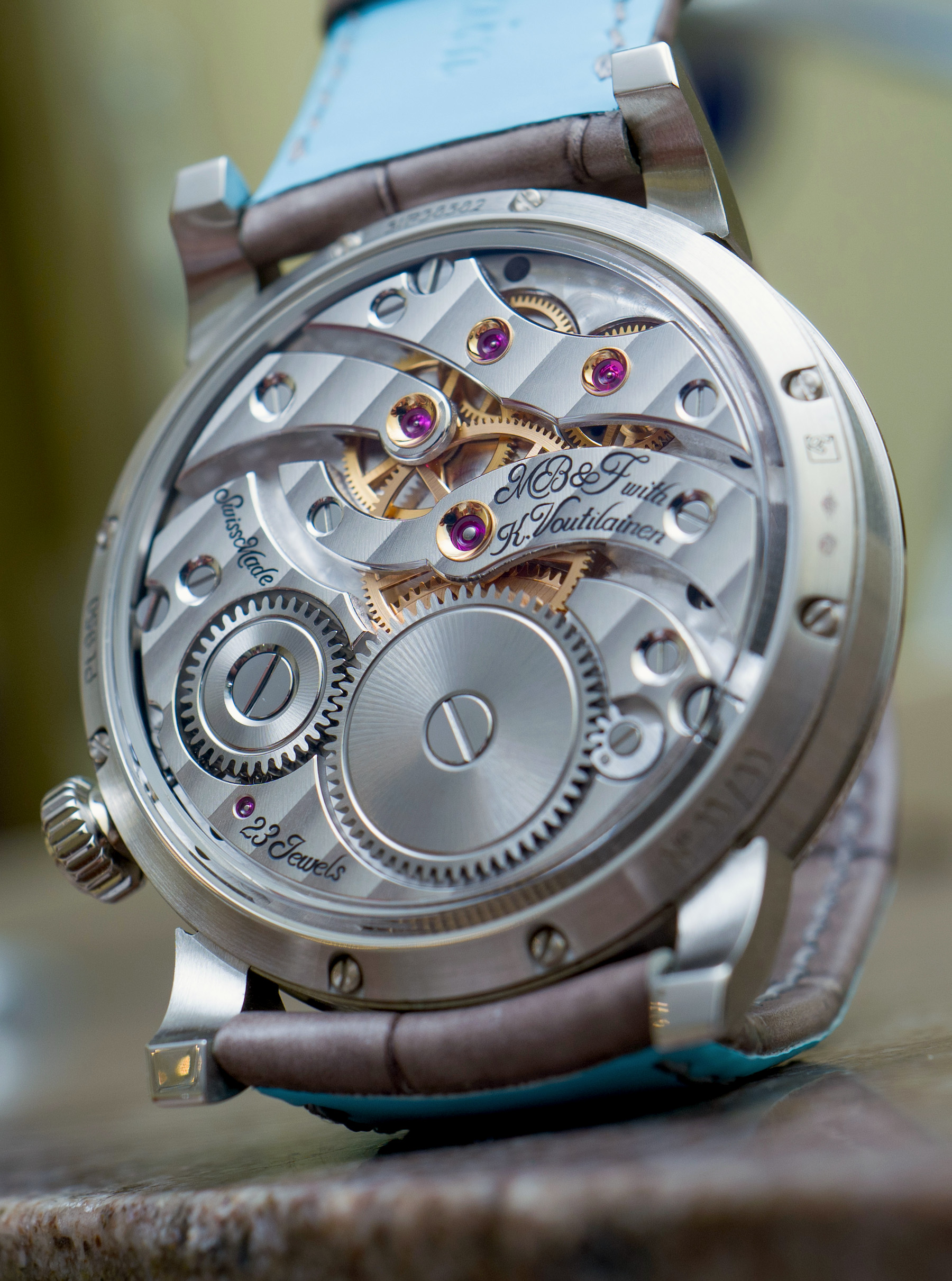 The caseback takes a close and hard look even for the most seasoned enthusiast to realize the absence of a balance wheel — there is just so much 19th-century horological jewelry to take in and appreciate. The bridges and plates were drawn up by a true master watchmaker of our time, Kari Voutilainen, a provenance reflected in every detail, curve and texture. Massive wheels with beveled and polished spokes transfer energy to the parallel universe that lives above the dial while their proportionately large, pink jewels are secured by gold chatons throughout. Every screw displays mirror-polished heads surrounded by the polished countersinks. The barrel cap and ratchet wheel have spiraled, satinated surfaces surrounded by plates covered in Côtes de Genève stripes, with the subtle circular pattern of perlage glistening beneath them all on the mainplate of the LM101 caliber. This movement — and the entire Legacy Machine family — is what Max Büsser would have created, had he been born 100 years before, in 1867, as opposed to 1967. The LM101 is an actual time machine for its creator and its wearer alike. 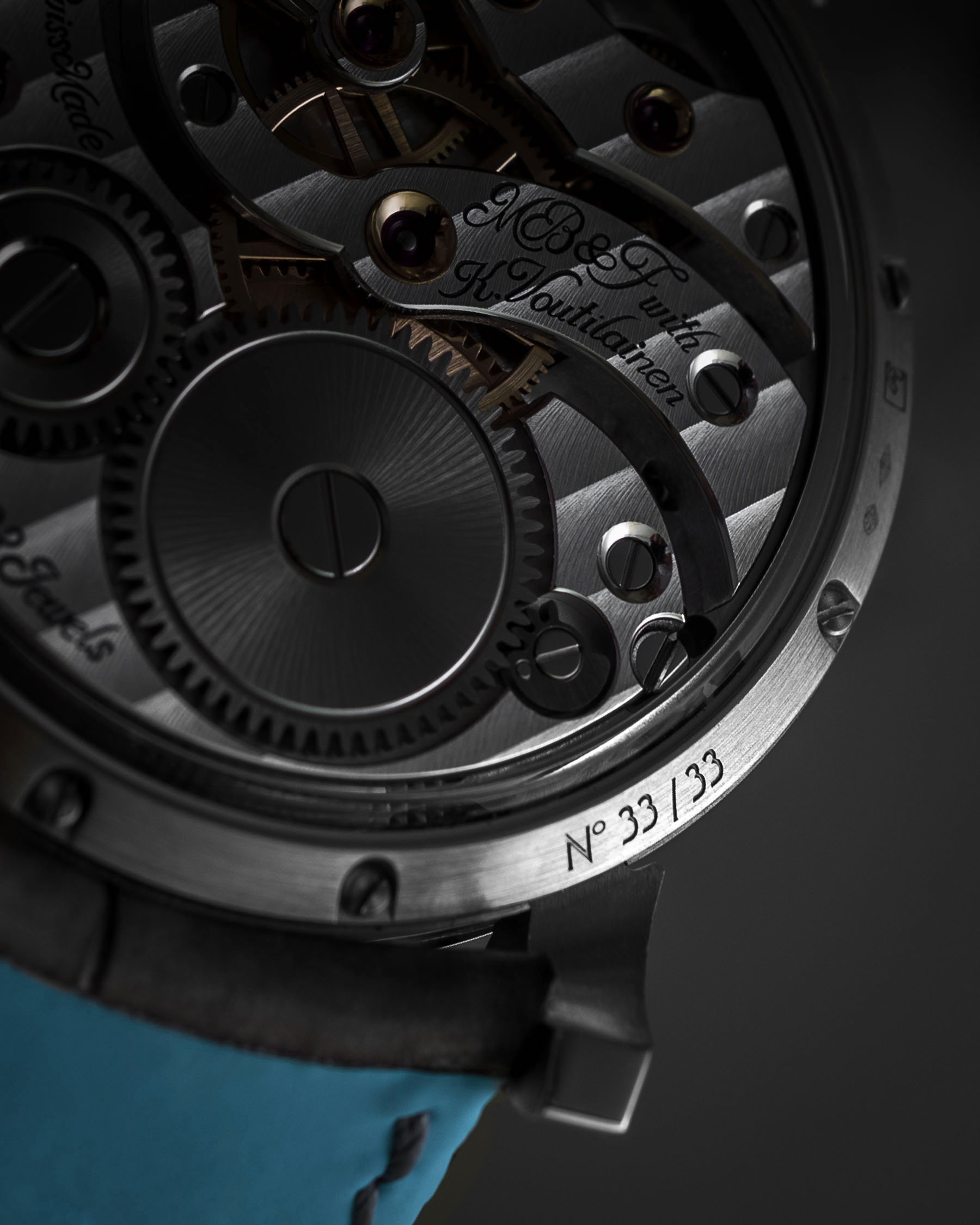 The Most Compact Legacy Machine

With a case diameter of just 40mm, the LM101 is easily the most compact and, arguably, the most wearable MB&F Legacy Machine to date. It is known that even the craziest MB&F creations, like the HM4 or HM10, have been shockingly comfortable to wear, the Legacy Machine concept is served exceptionally well by the smaller size. From the bottom of its lugs to the top of its ultra-domed sapphire crystal, the LM101 measures 16mm — like a chunky 7750-equipped chronograph —, but the platinum case profile that one’s eye registers when assessing the thickness of a watch is only about half of the overall height. Furthermore, it is almost as though the smooth, domed sapphire crystal actively made its way under sleeves and cuffs, making it the sort of discreet wear one requires when wearing it with more formal attire. 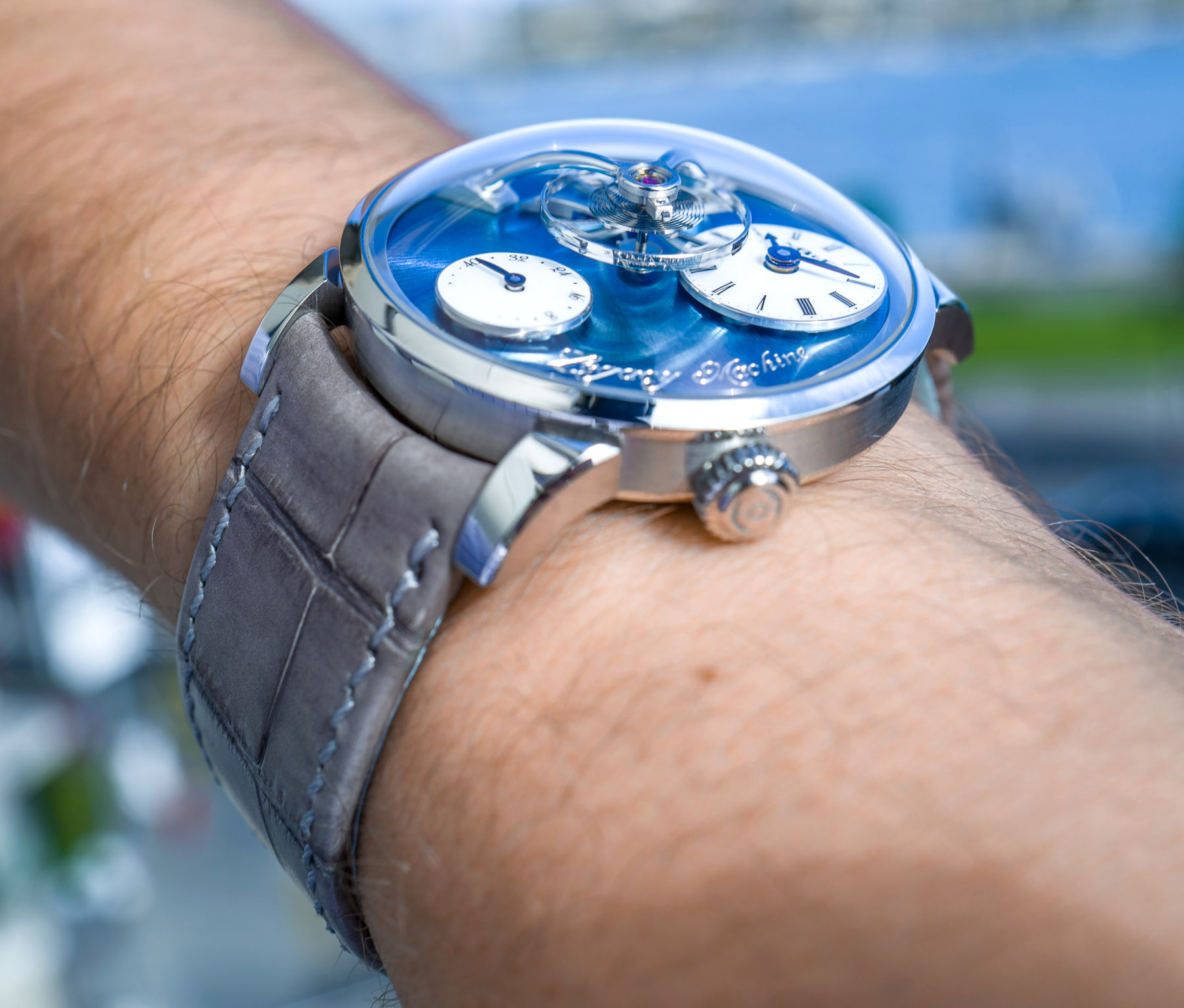 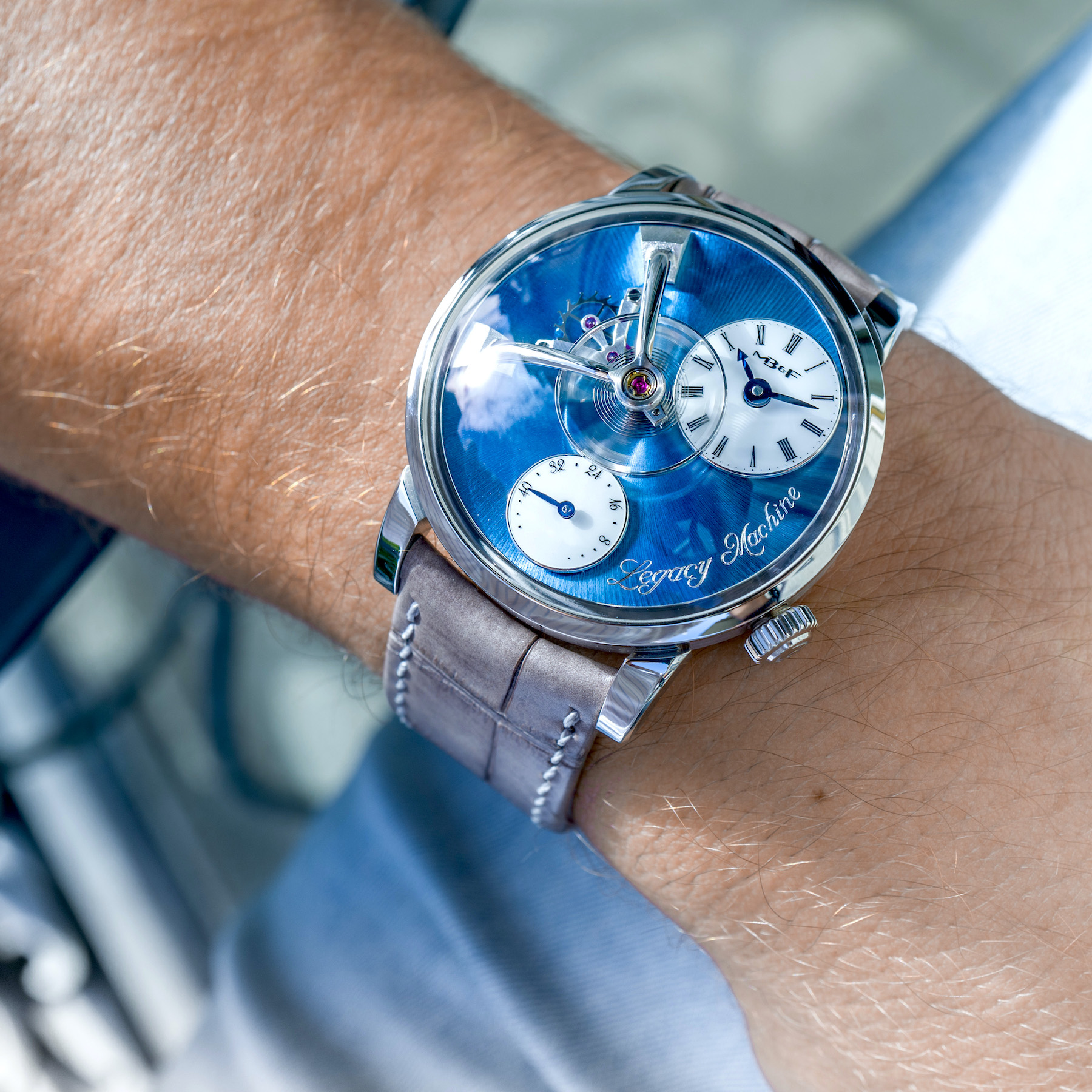 On the wrist, the LM101 continues to amaze with its bold display of the balance wheel and escapement. But there is an underlying sensation that takes a while to identify. While the obvious show-stopper features perform to design and continue stealing one’s attention, the LM101 also offers a unique wearing experience through its exceptional proportions and “stance” on the wrist. Proportions — a defining, yet generally under-appreciated feature of every timepiece — have been fine-tuned in pursuit of a look that, although quirky, will never go out of fashion. No matter how luxury watch trends and tastes change over time, a 40mm-wide watch will always look right, and that’s kind of important on a watch that’ll remain collectible and cherished for decades and centuries to come. 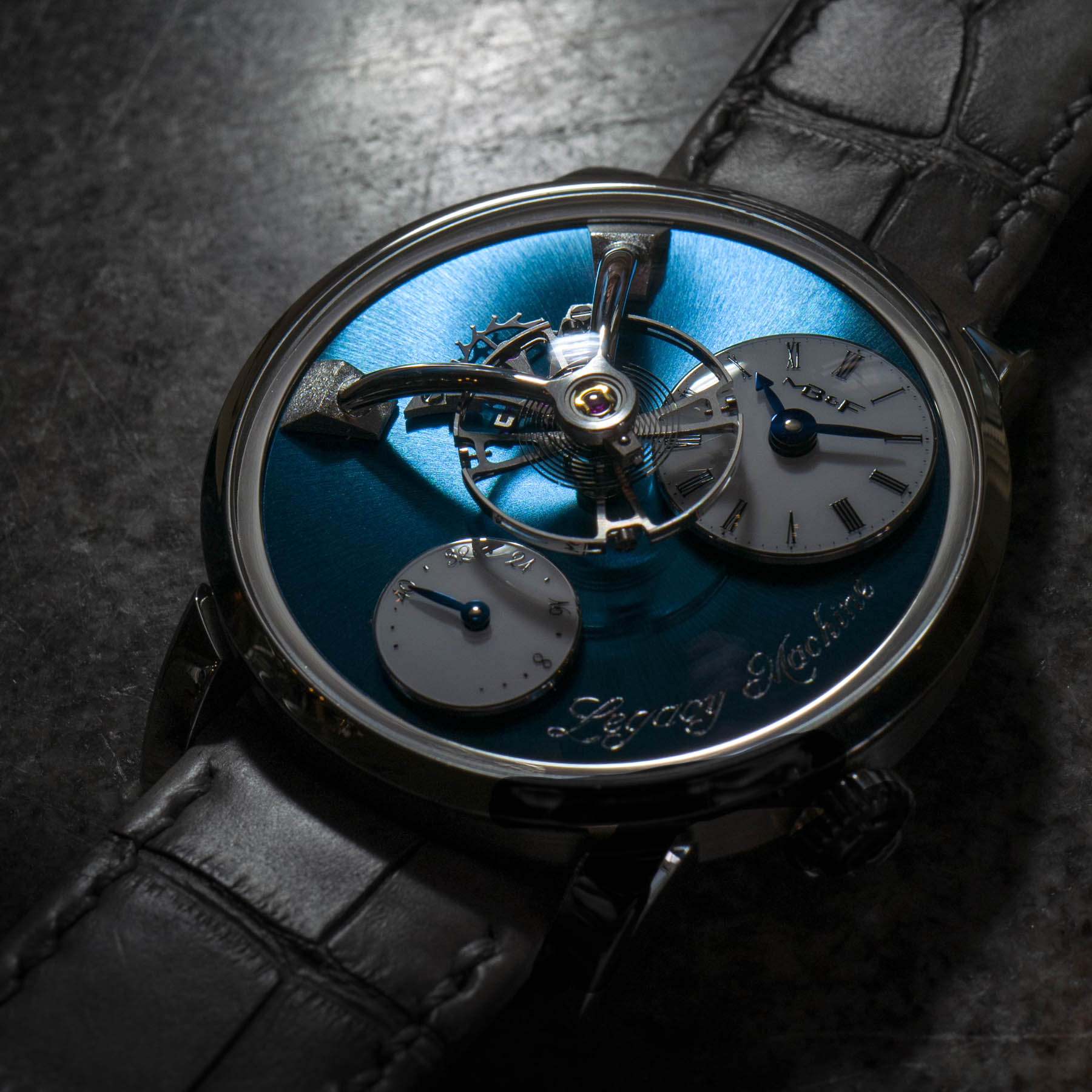 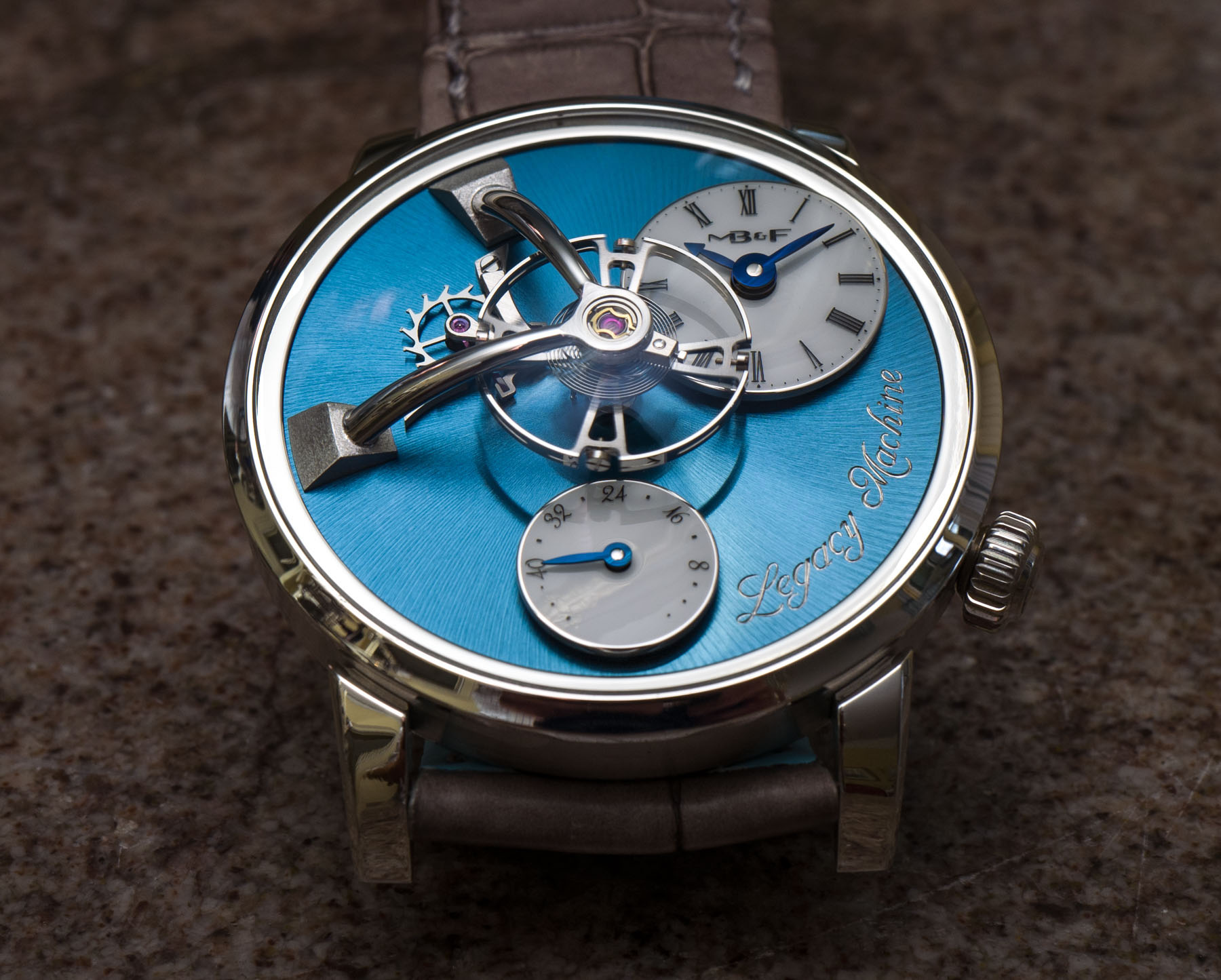 Time is displayed on a white subdial at the 2 o’clock position of the watch while its friend, set at 6 o’clock, is there to display what remains of the LM101’s 45-hour power reserve before it is to be rewound through the crown. The subdials appear enameled for their deep gloss — however, they are in fact lacquered, using several layers to achieve this rich, old-school look. Combine these and their blued hands with the electric blue, spiraled surface of the greater dial of the LM101 platinum for an asymmetrical, yet somehow still beautifully balanced face. Small details, like how the hand-engraved Legacy Machine script goes with the hand-painted numerals on the power reserve display, or how the subdials appear to be floating a fraction of an inch above their blue underpinnings just add to the theatre of LM101. 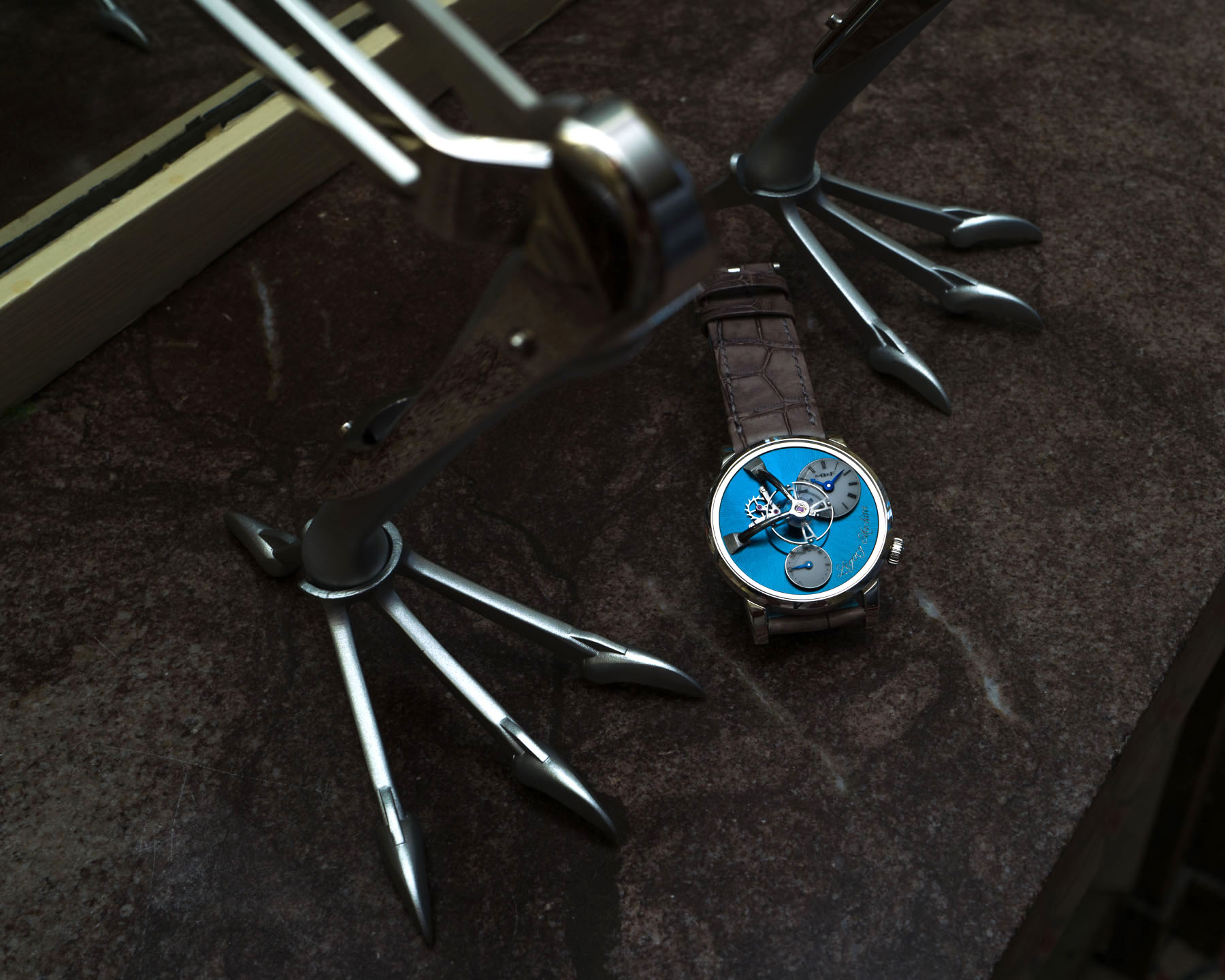 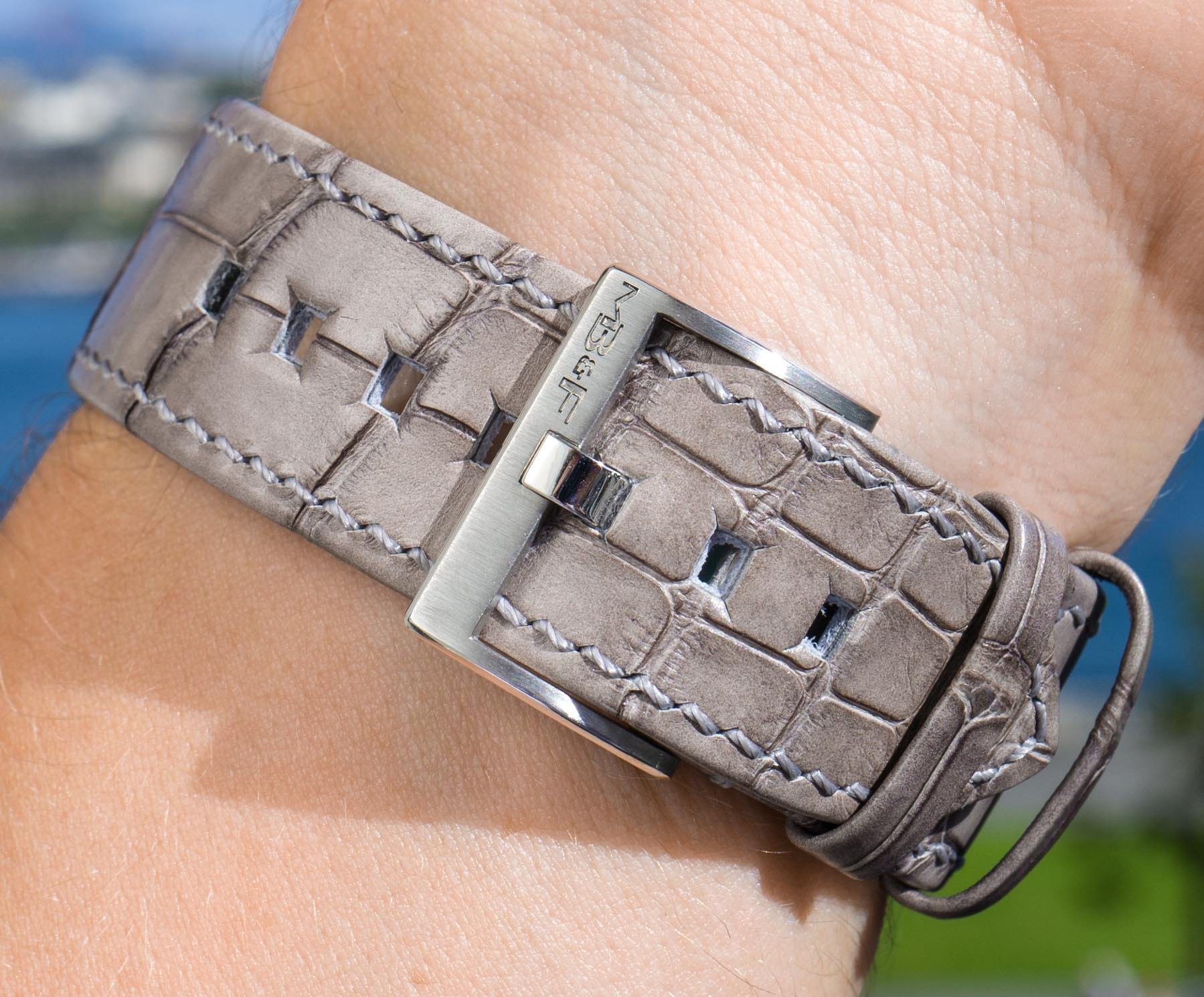 The platinum case and buckle feature alternating surface treatments — a major headache to get right on 950 platinum, even for the highest-qualified eggheads working at “L.A.B.,” i.e. Les Artisans Boîtiers, the La Chaux-de-Fonds-based specialist case manufacturer. Platinum is notorious for being very hard and at the same time highly malleable. Getting it to the correct shape eats through tools like no gold or steel case ever would and polishing/brushing it to the desired design is immensely difficult because it heats up quickly, making it impossible for the polisher to hold on to for too long. Once masters of their trade are done with it, though, its deep sheen never replicated by steel or 18k white gold makes up for it all — as does its immense weight and feel on the wrist. The LM101 framed in platinum sits happily planted on the wrist — although that is to the credit of the Camille Fournet bespoke strap and its deep integration into the case design. 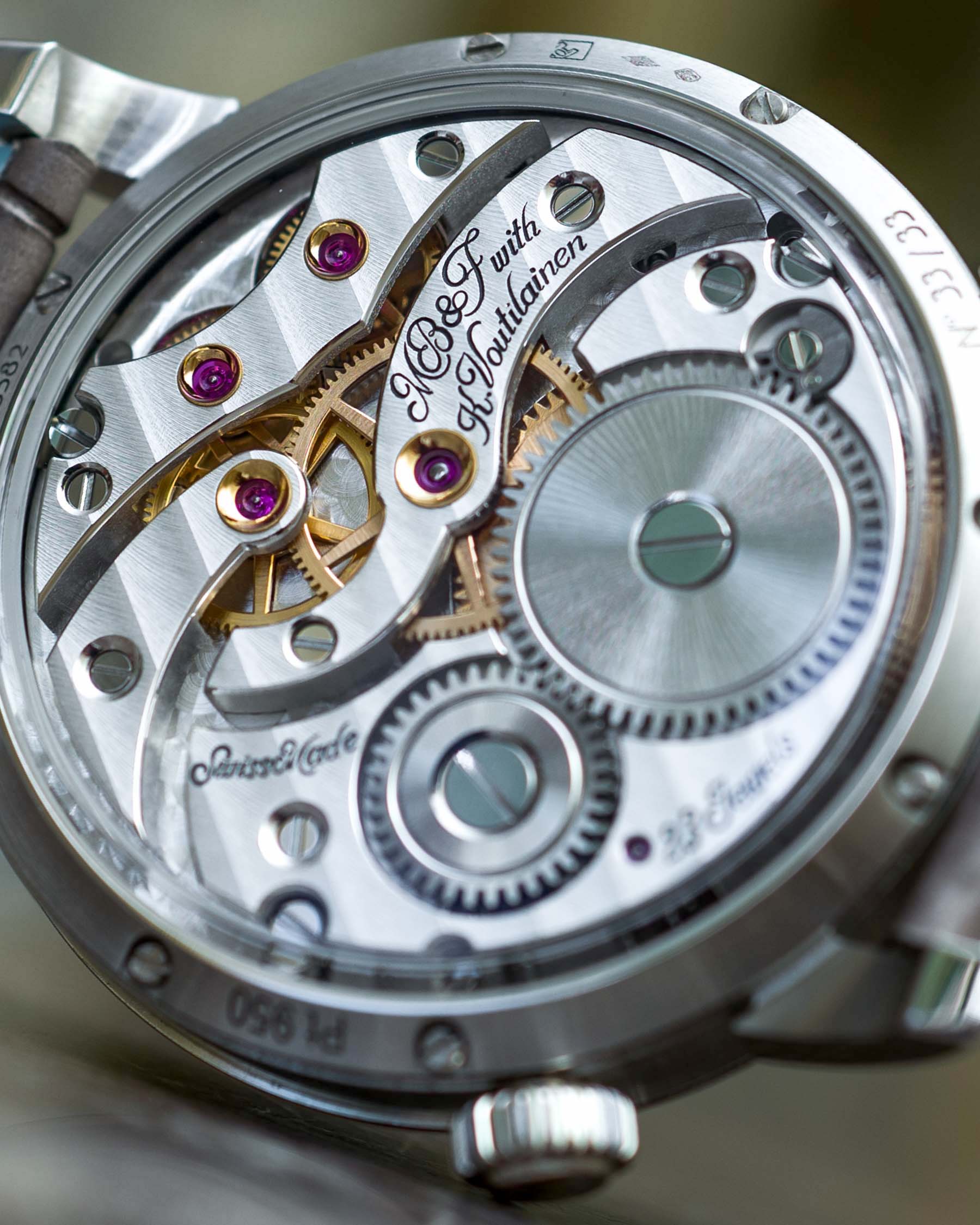 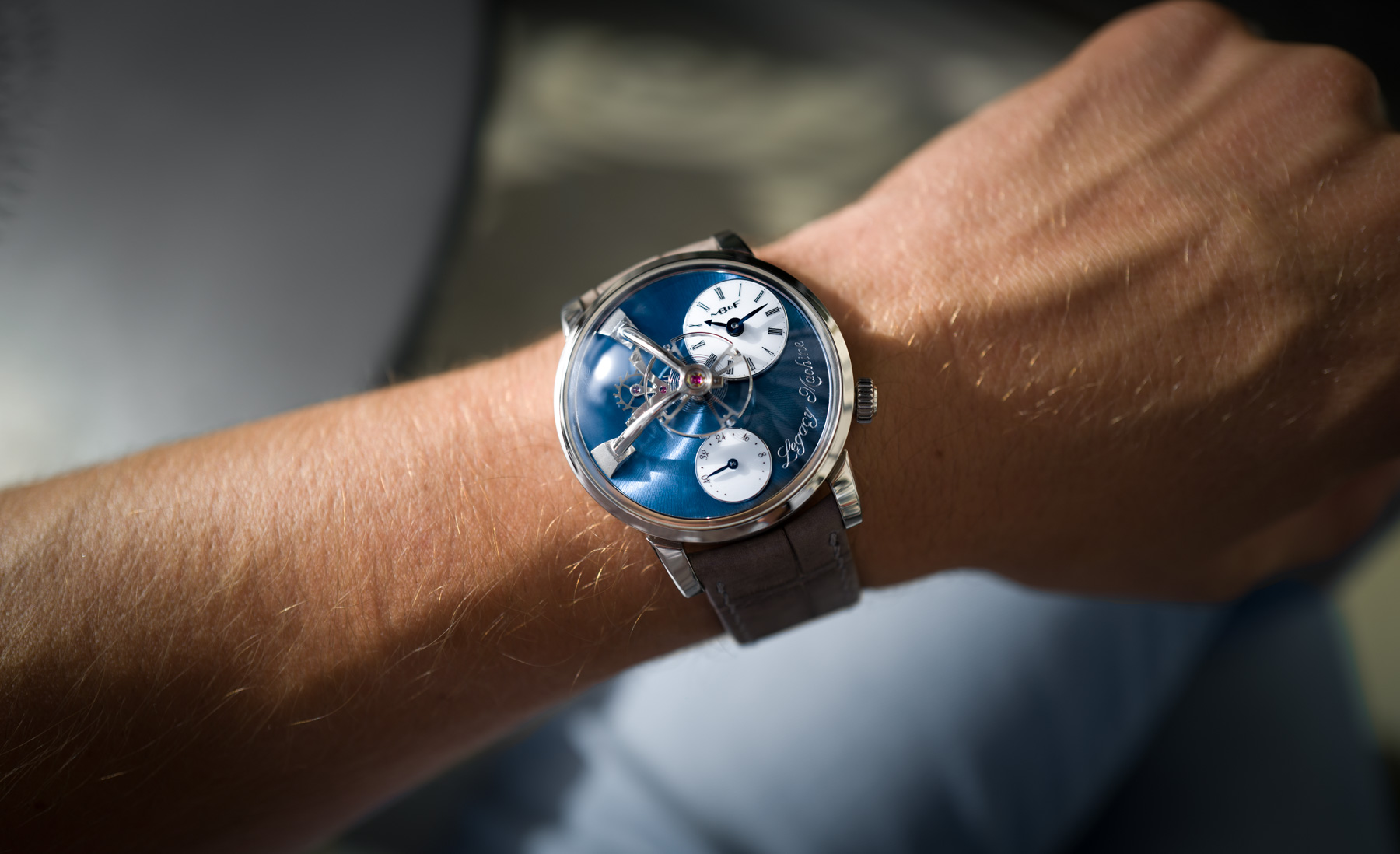 As much of a talking piece as every MB&F Legacy Machine is, not much actually needs to be said to convey the air of magic that lingers around these creations. Front to back, off or on the wrist, aesthetics to execution: They are full of attributes to make it a highlight of any collection, no matter how vast or special. The LM101 in platinum with an ice blue dial not only stands to neatly expand a platinum-focused collection but also to represent a be-all-end-all piece — the only one that one wears day in and out. It is a Legacy Machine not only in its execution and inspiration but also in that it will prove to be a legacy piece in the long run as well. Now, the very last one, number 33 out of 33 ever made, is available to purchase on the MB&F e-shop. Price for the MB&F LM101 in platinum is 73,000 Swiss francs.