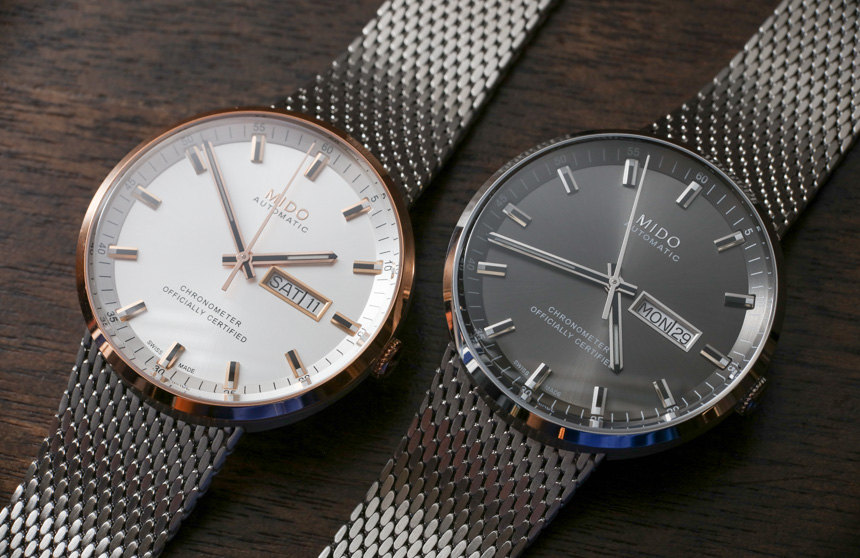 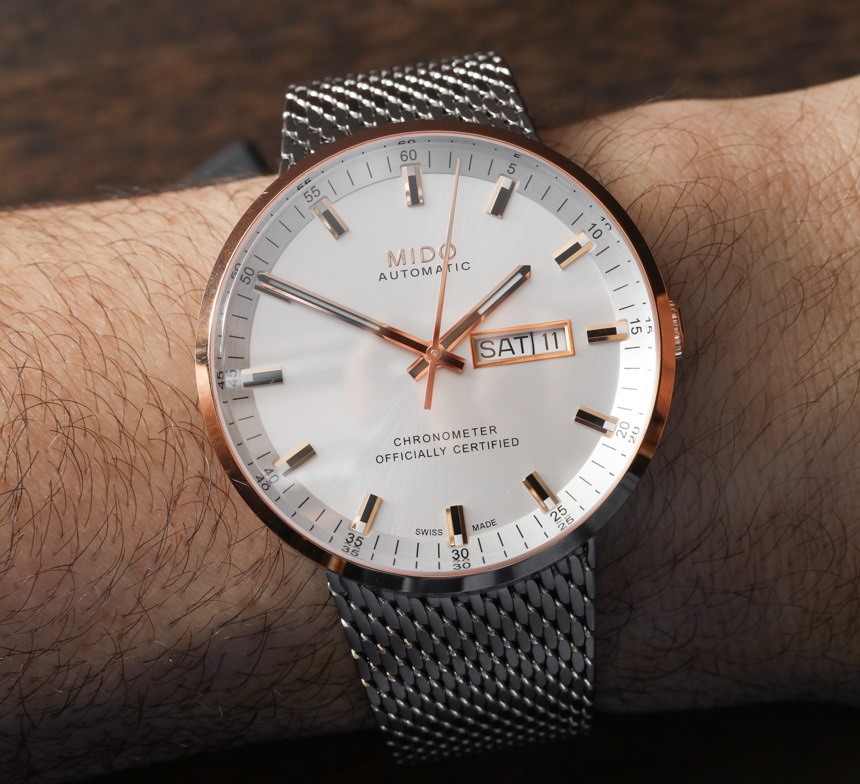 The often overlooked Swatch Group brand Mido has been producing Swiss mechanical watches since 1918, and their Commander line has been around since 1959. It’s been something of a challenge for Mido to really stake a cohesive brand identity (in the United States, especially) but the Commander has been their most easily recognized line. It hearkens back to a more classic era that can be better described as “traditional” which also runs the risk of being unfairly classified as too old-fashioned. The new Mido Commander Icône watch is definitely a retro-styled dress watch but one that has substance to it at a really attractive price under $1,500. Of note is the silicon balance spring-equipped, COSC certified movement that achieves an 80-hour power reserve for the Commander Icône. 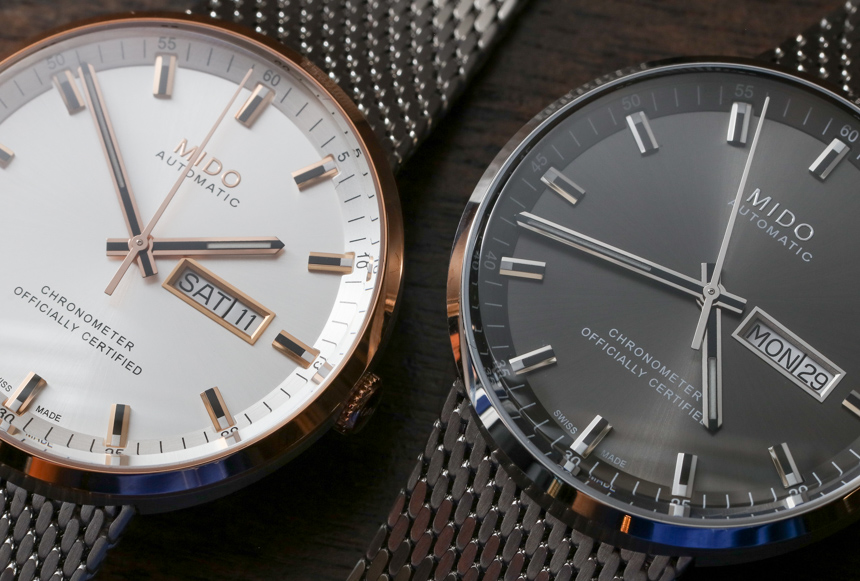 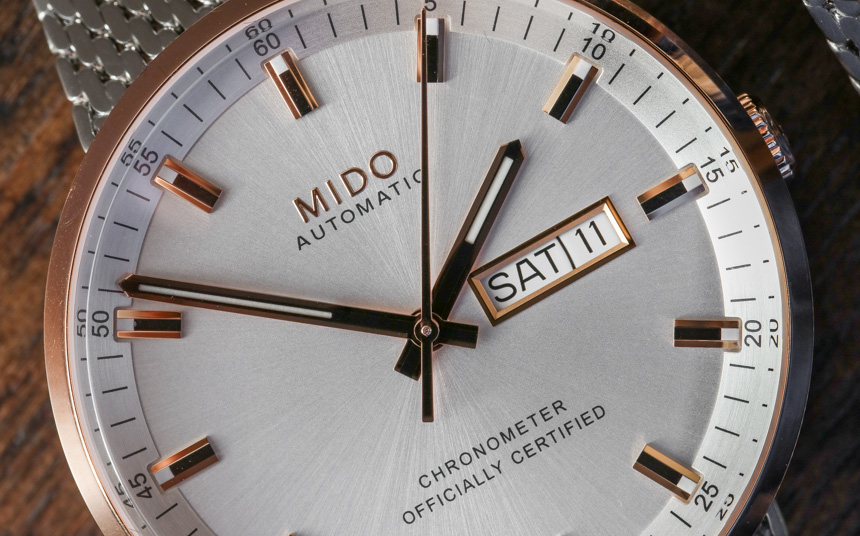 I want to start off by recognizing that though Mido have been producing quality timepieces for just shy of 100 years now, that no amount of history can make up for lack of a real marketing strategy that gives a brand some image to work with in regions where it’s not popular (namely China, Mexico, and some parts of South America). This proves itself to be true when reading Mido’s materials regarding the Commander Icône, though I believe the Eiffel tower metaphor has been around for some time now. When one of the first sentences I read says “Its slender, round case in satin-finished steel endows the Commander collection with an inimitable and immediately recognizable silhouette, just like the Eiffel Tower,” it’s quite obvious when an obviously unrealistic premise is being forced. 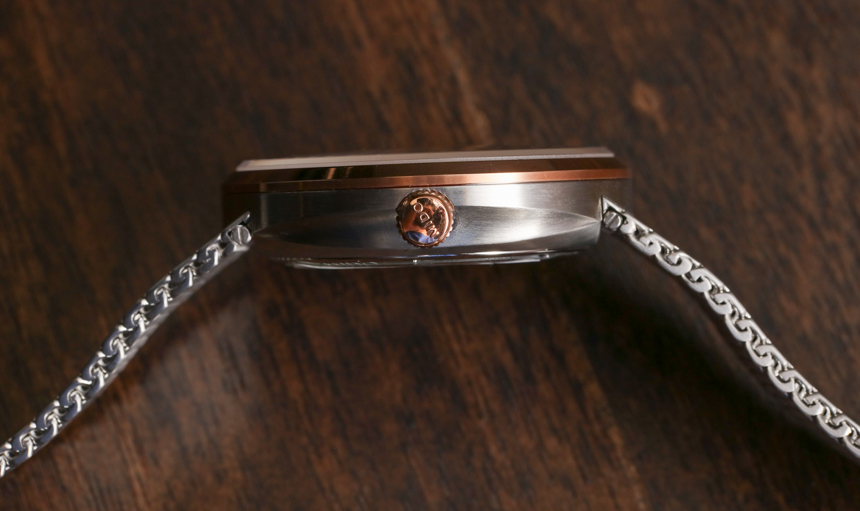 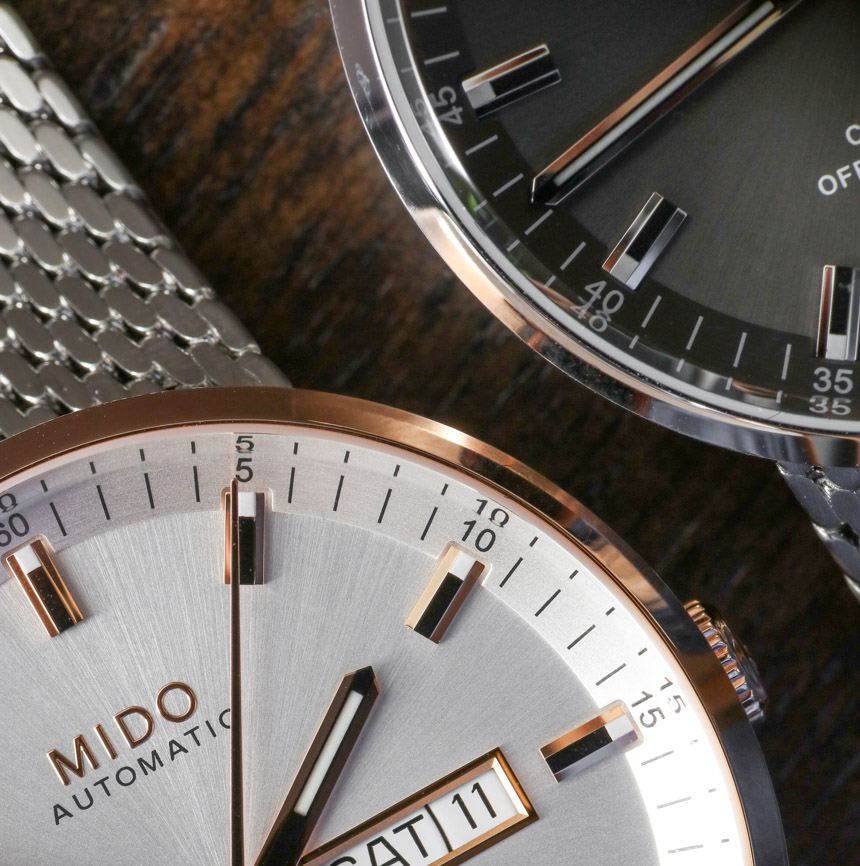 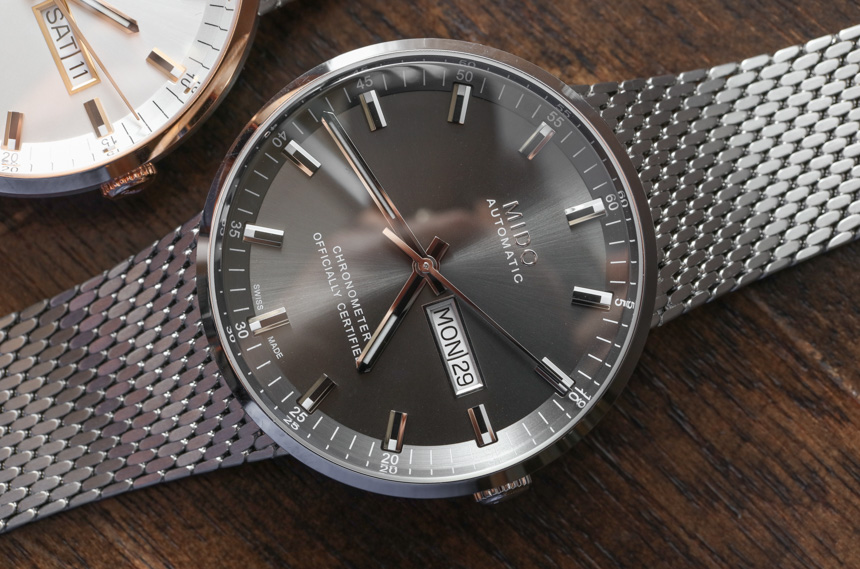 Fortunately, being someone who is in watch media, I know what to take with a grain (or fistful) of salt. What’s unfortunate for Mido is that a casual consumer might just roll their eyes and move on. Just something for the brand and the Swatch Group to consider. I understand the brand does quite well in China (so much so that another previous watch was named the Great Wall) but I really believe that a more effective and contemporary revamp of Mido can broaden the appeal. The Commander Icône packs a strong visual identity (for better or worse) along with an impressive modified Swatch movement at an already reasonable price that I’m sure you can get a good deal on. Let’s take a look at the substance of what I’m talking about. 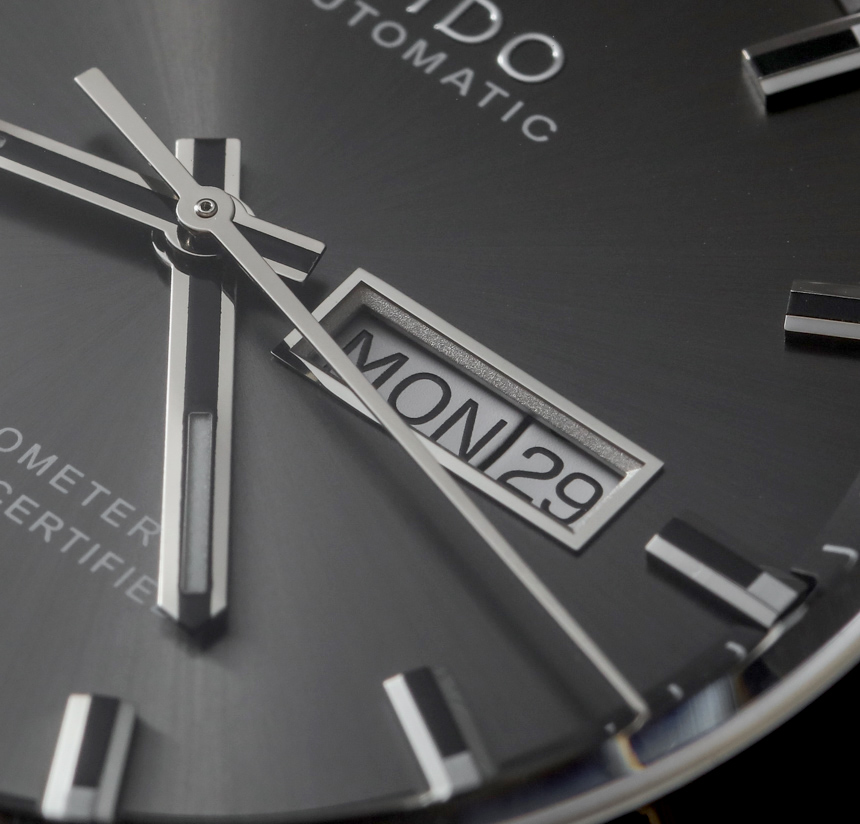 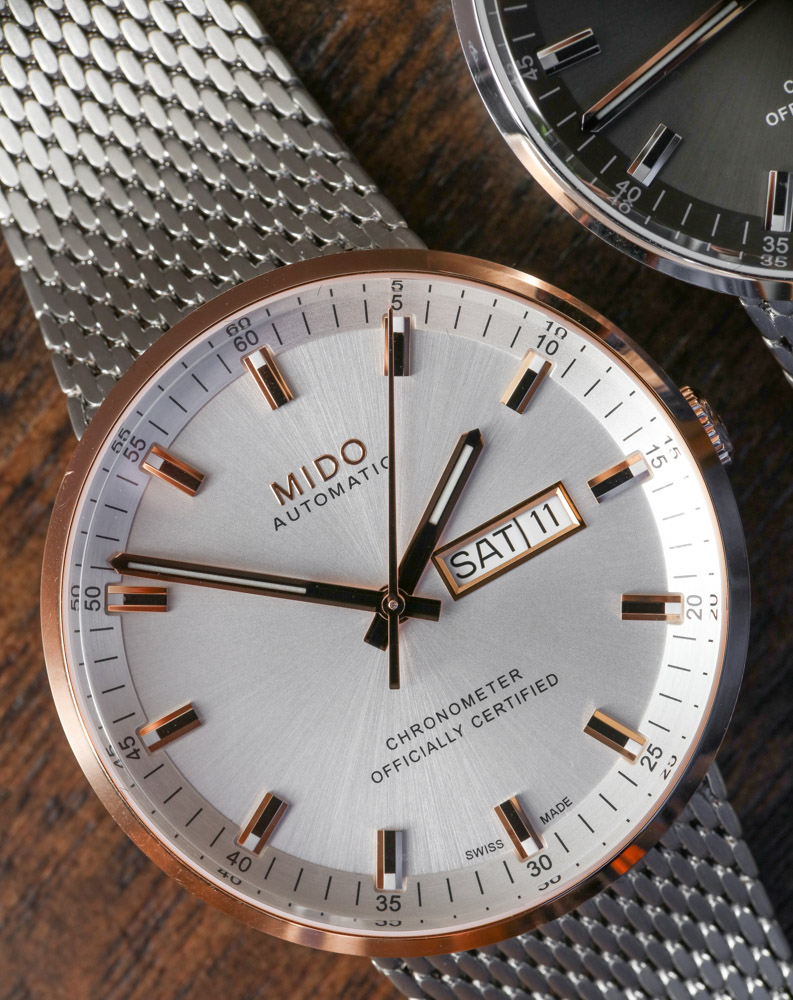 The Mido Commander Icône is the brand’s tribute to the longstanding Commander dress watch. Measuring 42mm wide in that perfectly round and recognizable case, it has a very clean and retro-slick dial that successfully matches a classic aesthetic with a modern sized watch. Available in either a gray or white sunray satin-brushed dial, the conservative Commander Icône comes in a satin-finished stainless steel case. 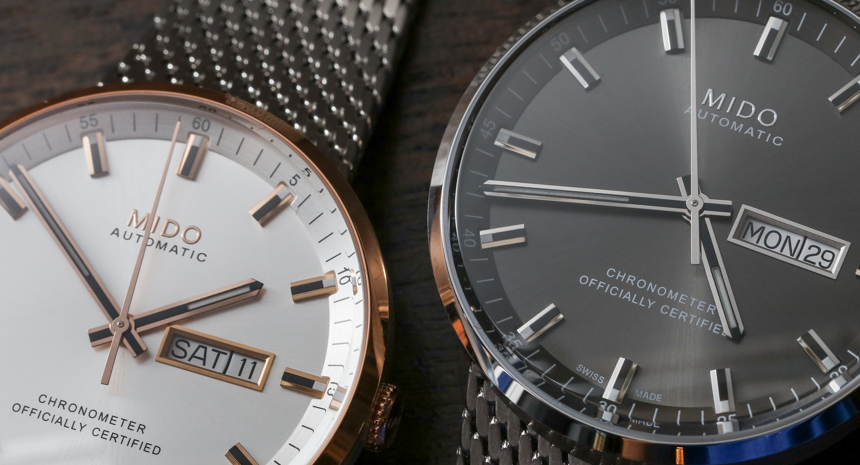 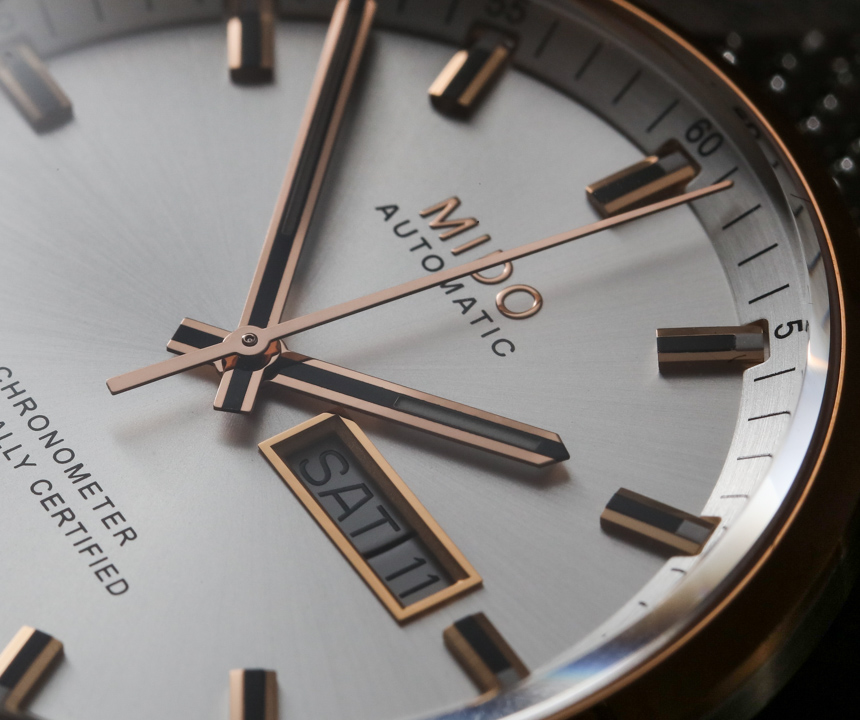 The lumed hour and minute hands are quite legible and fortunately, the dial doesn’t fall victim to glare. The dial is pretty minimalist but, of course, the day/date window at 3 o’clock might evoke some polarizing opinions. I actually think it looks pretty good here but I have to admit it lends a very old-fashioned aesthetic to the watch. This is particularly true on the white dial version with the gold framed day/date window but the gray dial model does a good job in keeping the whole thing a little more sleek. On the other hand, the white aperture matching the white dial works in that version’s favor. You’ll also notice the applied polished hour indices match the hour and minute hands, looking really nice and well done. 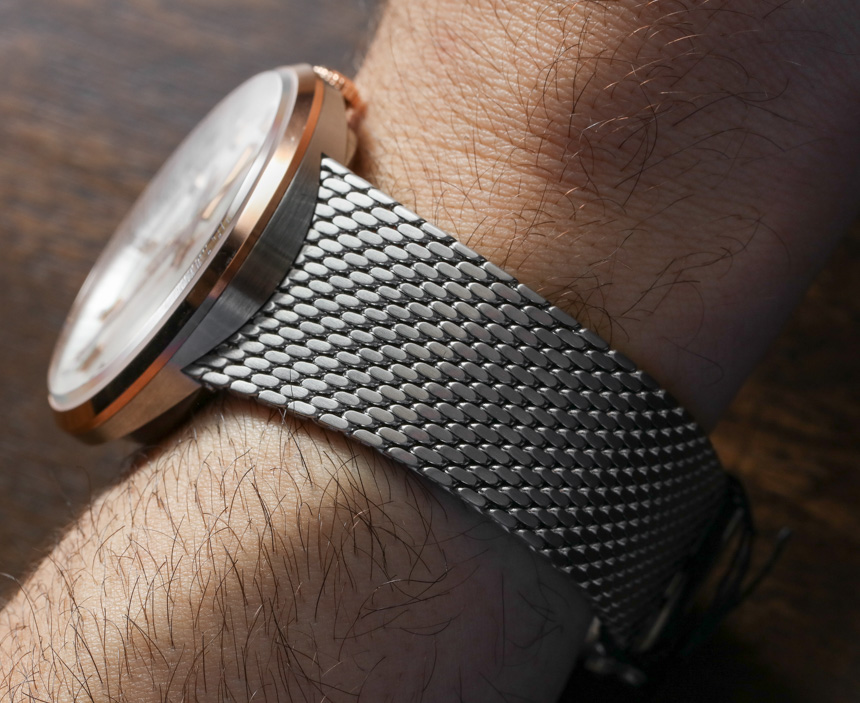 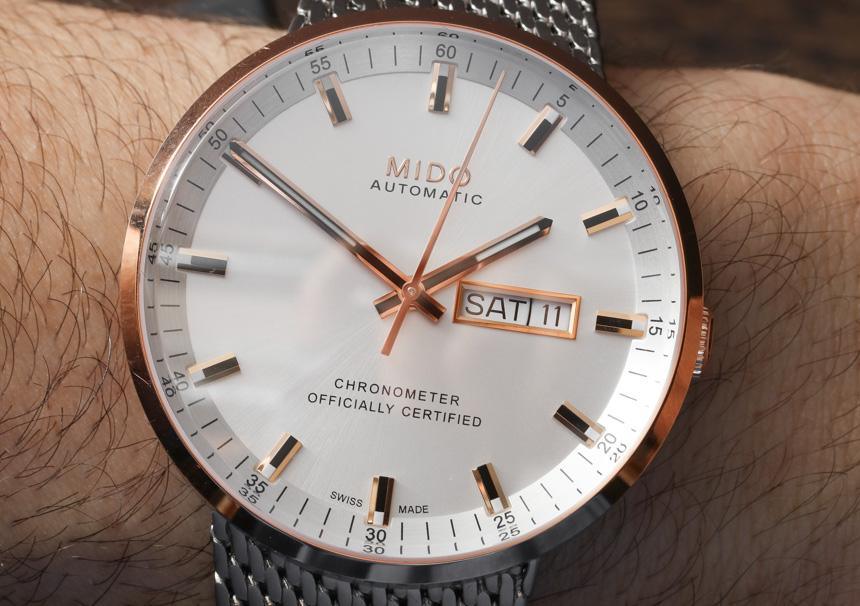 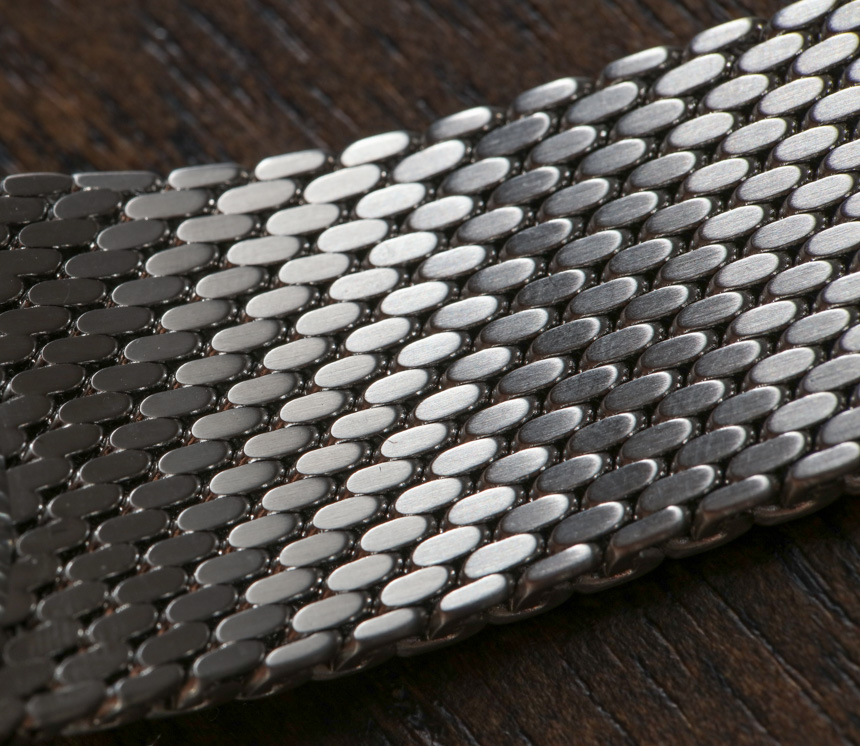 The round case is mostly undisturbed by a subtle crown and the integrated Milanese bracelet really is a great choice in that it brings a masculinely refined attitude. The bracelet utilizes a sliding clasp for easy adjustment, as well. I really like how the Milanese mesh bracelet looks on this watch and the sleek integrated lugs look so natural that it really is one of the aspects of this watch that drives its subtle appeal. The finishes of the hands, indices, the bracelet, and the movement all go into what makes this such a unique value proposition when considering what else is out there. There are prerequisites, though, in that the round case and day/date window are the first things you’ll notice. 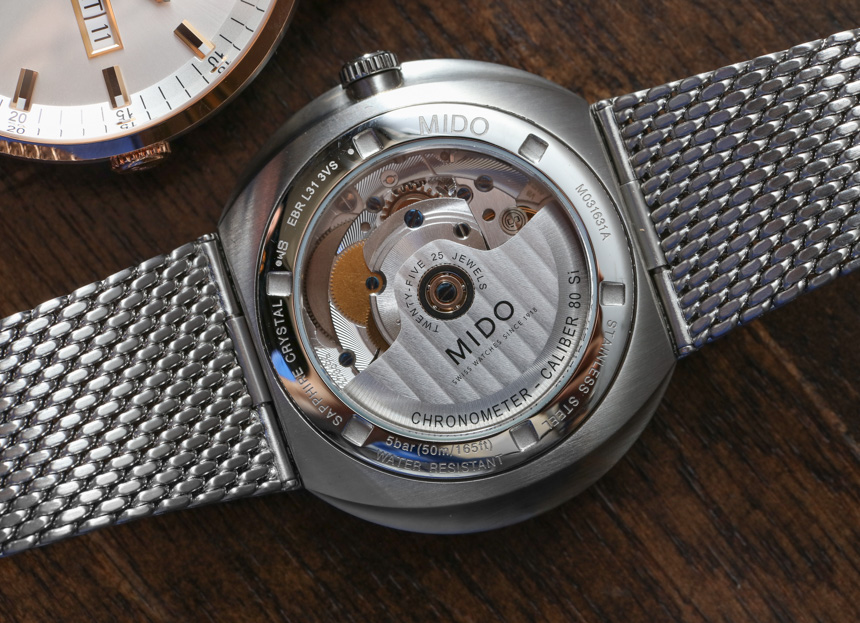 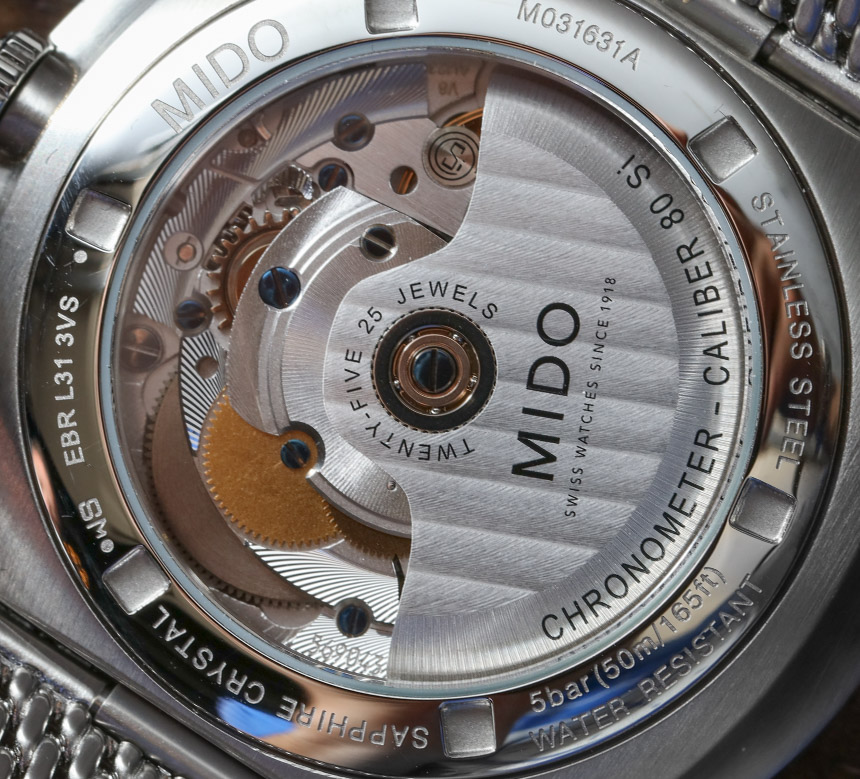 When turning the watch over, you see the exhibition caseback which reveals the automatic Mido Caliber 80 Si, which is a modified ETA C07.821 movement. This is a modified version of the “Powermatic 80” movement used by Tissot, Rado, and other brands. Utilizing a silicon balance spring and low friction materials, this movement (which operates at 21,600 vph) affords the Commander Icône an 80-hour power reserve which is obviously pretty impressive.

The COSC certified movement isn’t going to blow you away with its looks but the Geneva stripes, blued screws, and overall quality finish of the Mido Caliber 80 Si is attractive especially when considering the price point here. 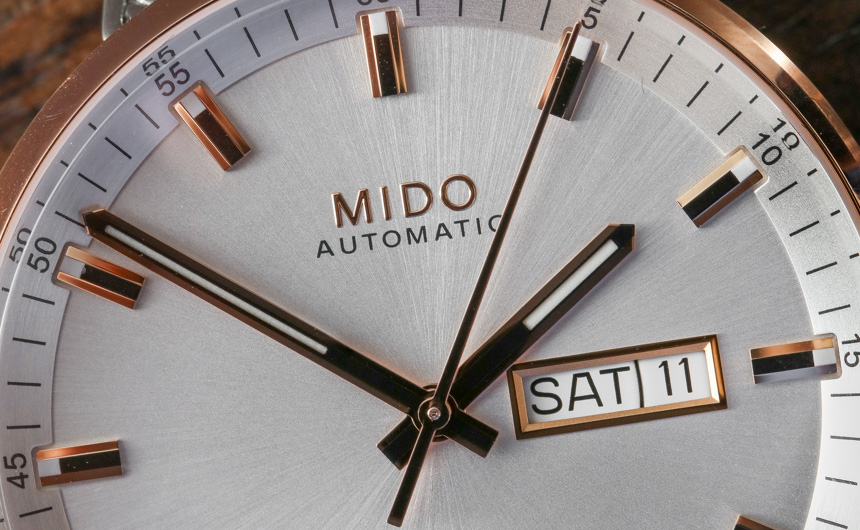 Much like their Ocean Star Captain V watch, the Commander Icône relies on the combination of distinct aesthetics, thoughtful and well-done finishes, and a solid, even impressive, movement at a very attractive price. Finding an audience in China, Mexico, and parts of South America (the word “Mido” means “measure” in Spanish), I am reticent to say that Mido will capture a similar segment of the market here in the States. However, if the classic design paired with an innovative movement appeals to you, then it’s tough to argue with the price of $1,360. midowatches.com