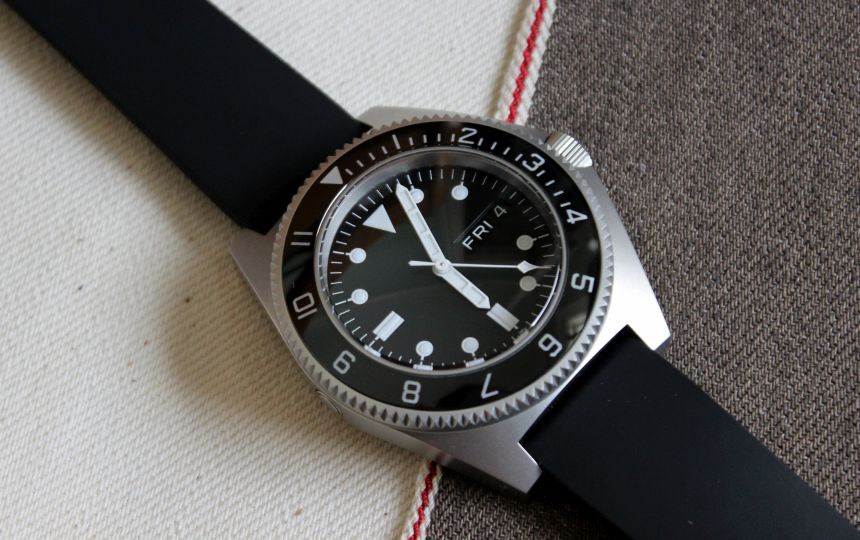 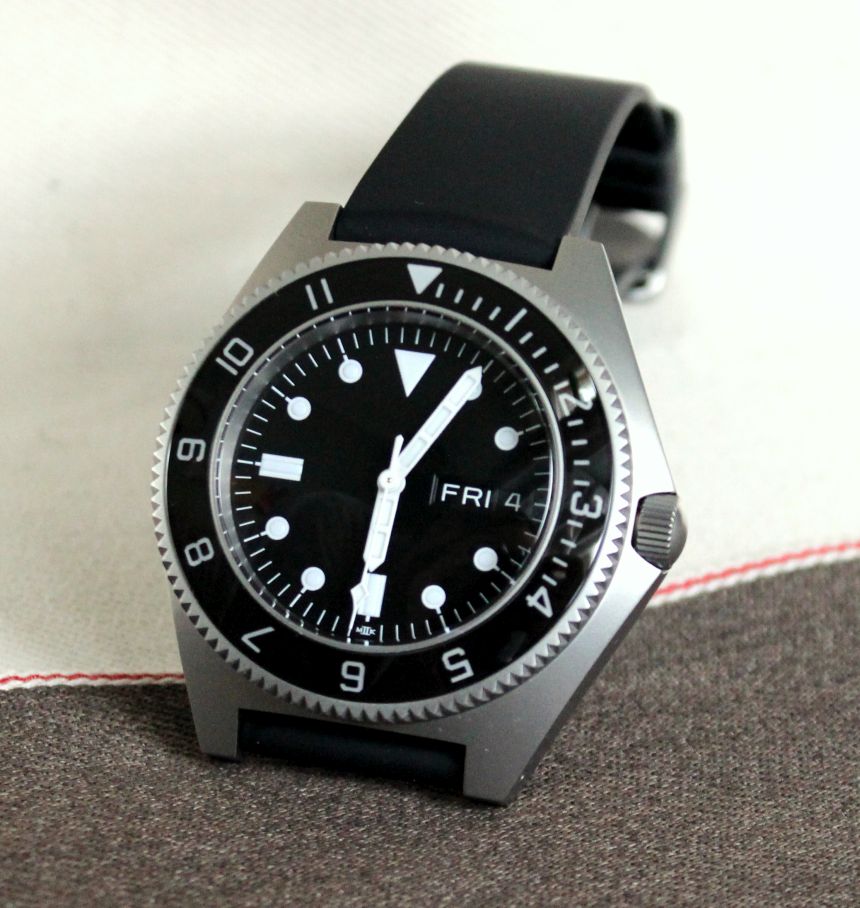 When it comes to our hobby of watches, getting acquainted with all that is out there can feel very much like you took the red pill, and there’s no sign of the end of the rabbit hole depths. This means, of course, that there can be a lot to learn about, and all manner of brands to become acquainted with. Some folks will tend to specialize eventually – focusing in, perhaps, on a singular style or type of watch, or aligning themselves with a particular marque. For myself (both as a writer and personally), I’ve maintained a healthy interest in the smaller boutique brands, as they tend to turn out some rather interesting stuff at great price points. Today’s review of the MKII Paradive, fits very neatly into that mold.

As a matter of fact, MKII is one of those brands I ran into very early on in my watch career, but that always remained on the periphery. As time went on, I became more and more aware of what the brand was producing, and when the opportunity popped up to review one of their models here at ABTW, I eagerly put my hand up. MKII models are known (or at least seem to be known in my head) for their clean, almost sterile re-interpretation of watches from days gone by. 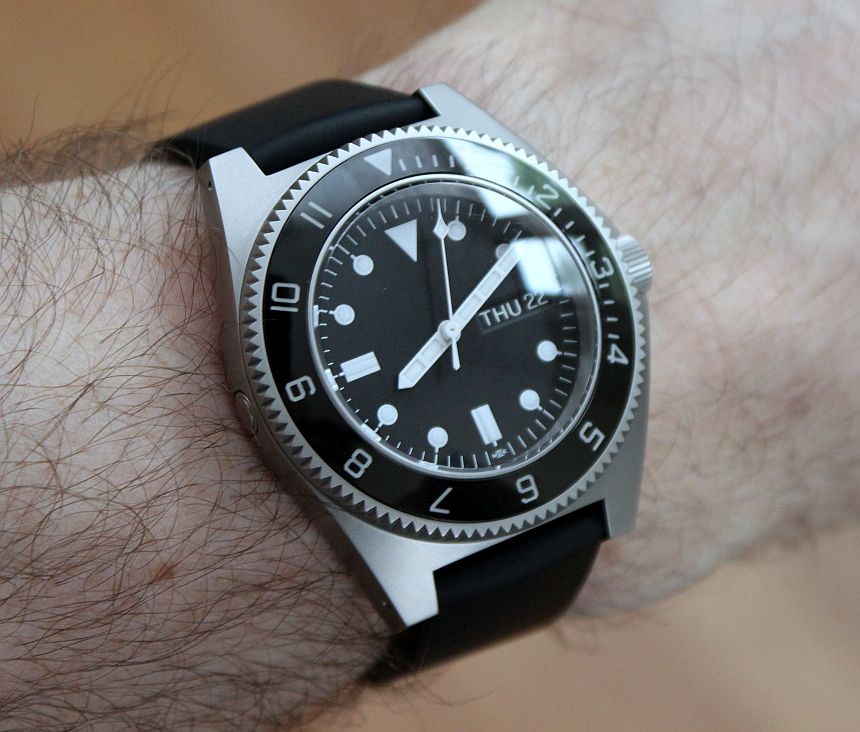 The MKII Paradive that we were sent over for review is a military watch, but it’s not derived from anything that was commercially available. Rather, they went into government specs, and settled on a watch that was issued to US Special Forces (and CIA maritime units) for a few decades from the 1960’s to the mid-1980’s. Rather than simply copying out what the specs said, and making a consumer-level variant, they went and did something that seems very similar to what resto-modders do for old cars – start with the original, keep the external design mostly intact, and then upgrade and improve like crazy wherever you can. 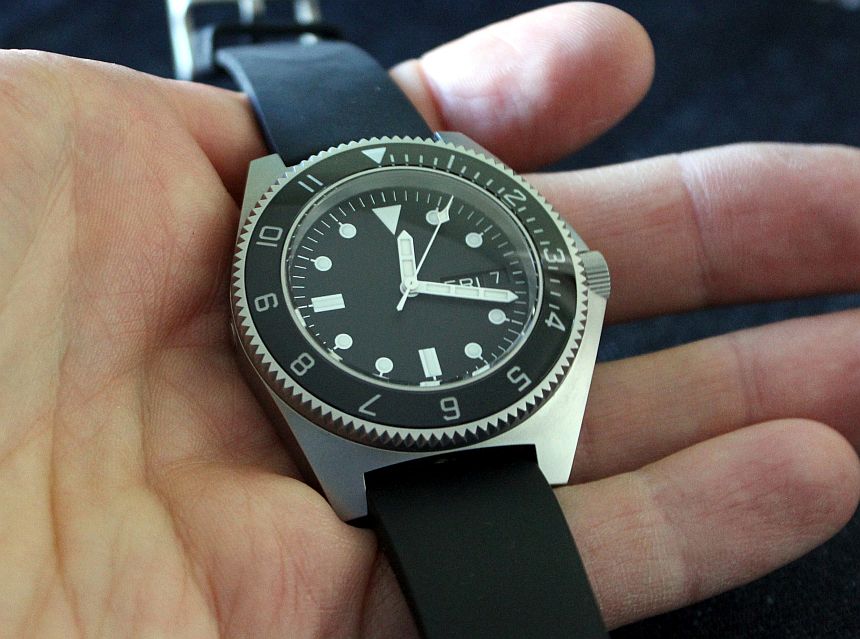 The end result is a watch that looks very much like the original, but will be much more reliable and solidly built. Of course, being the watch geeks that we are, we want to know what all of the improvements that were made are. For starters, the engine has had a significant upgrade (to the ETA 2836-2), and how that movement is protected has been vastly improved as well (addition of a HEV, more durable crown/tube design, swapping the acrylic crystal for an AR-coated sapphire one). 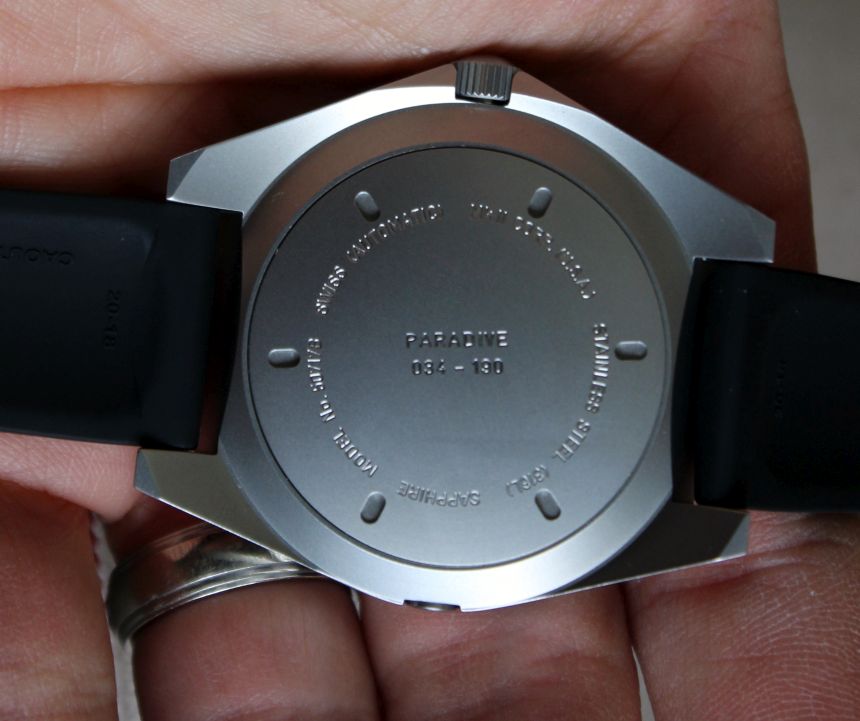 Safety and comfort (to carry the automotive analogy along a bit further) also saw improvements.  On the safety side, the original (per military spec) bezel was a bi-directional; on the MKII Paradive interpretation it’s gone to a more-common (at least, these days) uni-directional.  Perhaps not as critical of a change on our 12-hour example, but still a welcome one. On the comfort side of the equation, they stuck with the original “monocoque” design, but took it to a three-part design, enhancing the serviceability of the MKII Paradive (and more on that case shape in a bit).

Last, but certainly not least, they gave things a fresh finish. The 41mm case carries a butter-smooth satin finish, topped by a bezel full of that new-car shine. That’s courtesy of engraved numbers filled with luminous enamel paint (so they shouldn’t wear off like an anodized bezel), set into a hardened aluminum inlay that is coated the same way aluminum parts on the M-16 rifle are. Oh, yeah, and it’s all topped by sapphire, so the sheen matches that of the main crystal. So, aside from another subtle military reference, you’ve got some assurance of the bezel being able to stand up to hard wear. 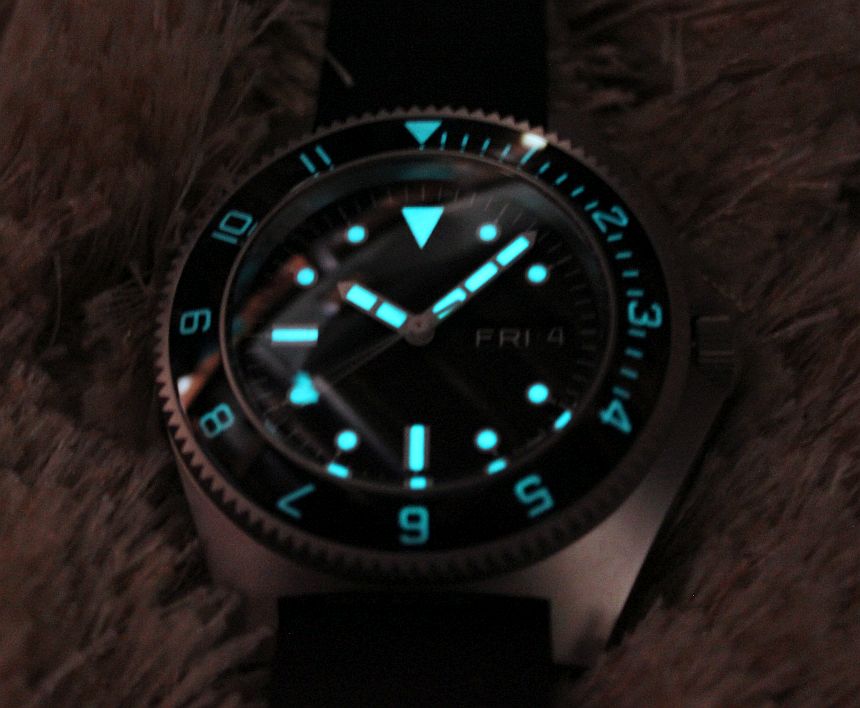 As you can tell, this is a watch that’s military-grade, through and through. On the wrist, however, it’s not one that really screams out that heritage. While I had the MKII Paradive on, I really felt like it flew under the radar – it’s not overly large, doesn’t involve any military company logos (or use of camo) – feeling like, well, a solidly-built everyday sort of a watch. This is due to just how cleanly the MKII Paradive presents – it’s a purpose-built watch (owing to it’s mil-spec roots) that doesn’t have anything extraneous. Even the company logo takes a knee in deference to the overall design (I do rather like how it sneaks in under the 6 o’clock index). 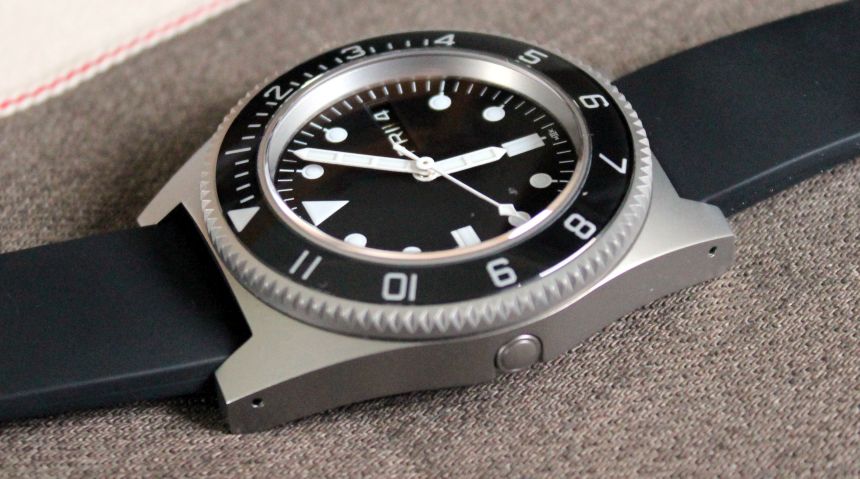 On the wrist, the attention to detail is evident. The dial of the MKII Paradive is clean and crisp, with perfectly color-matched day and date wheels. The lumed handset is well-proportioned, with the sweeping seconds hand that reaches out to the edge of the dial. As I mentioned earlier, the curved design of the case does certainly help to hug the watch closer to your wrist, even with the domed case back. This makes for a nice fit on the wrist, which is further helped along by one of the thinnest (and comfortable) rubber straps that I’ve seen on a watch. 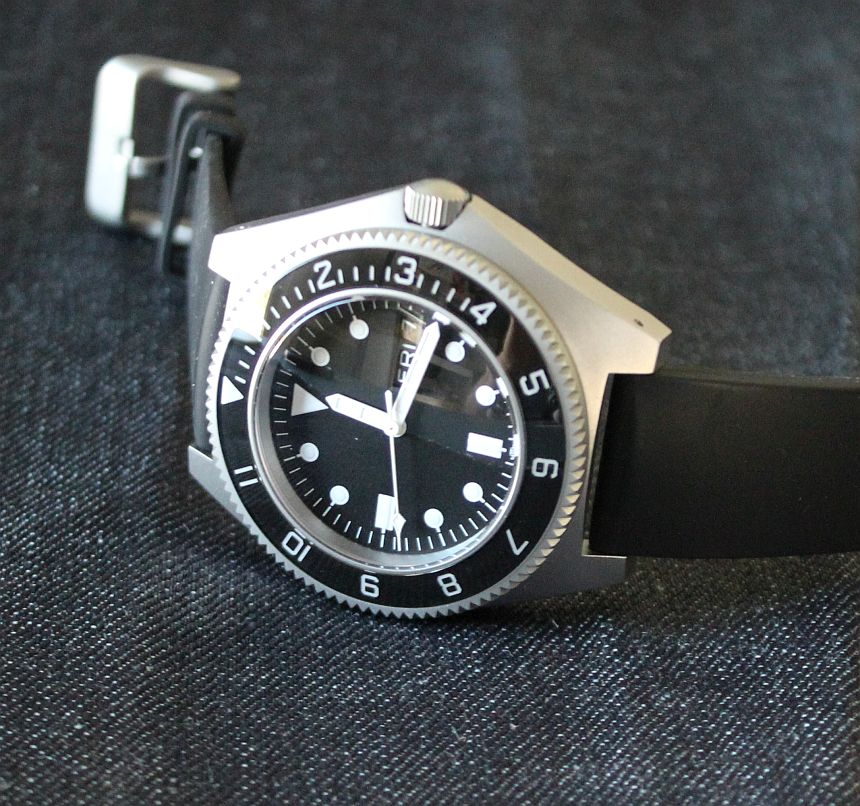 While I found a lot to like with the MKII Paradive watch, there was one design feature I wasn’t as sure of, at least at the start – the integrated crown protection on the case. While I understand that it makes for a smoother look (and perhaps some ease of manufacturing), while affording protection for the crown (and removing points that might otherwise snag on something), it does make for an off-balance case, in terms of visual weight.  As I spent time with the MKII Paradive watch, though, that was something that just kind of faded away – plainly put, you get used to it.

While the Paradive was my first experience with MKII, I came away from my time with the MKII Paradive watch mightily impressed. Attention to detail and fit-and-finish on the $1,495 (if you want a sapphire bezel, it’s $1,695) watch are top-notch, and there really doesn’t seem like there’s an element out of place. While I’m still not a huge fan of the monocoque case style, it works well for the overall look and feel of the watch. Given how they executed the military spec, this is one of those rare mil-watches you can wear daily without it seeming out of place. In other words, I think it would be a good watch for many people, not just those who are fans of mil-spec watches.  mkiiwatches.com

Necessary Data
>Brand:  MKII
>Model: Paradive
>Price: $1,495 ($1,695 for the sapphire bezel)
>Would reviewer personally wear it: Absolutely – for a military-inspired watch, this is one of the most subtle (and solid) ones I’ve spent time with
>Friend we’d recommend it to first: This is, I think, a perfect watch for just about anyone – not just those into mil-spec items
>Worst characteristic of watch: The only nitpick I had with this watch was the unbalanced (left-right) design of the case
>Best characteristic of watch: For being a no-nonsense watch, the details are excellent, and keep it from being a boring piece
Advertising Message