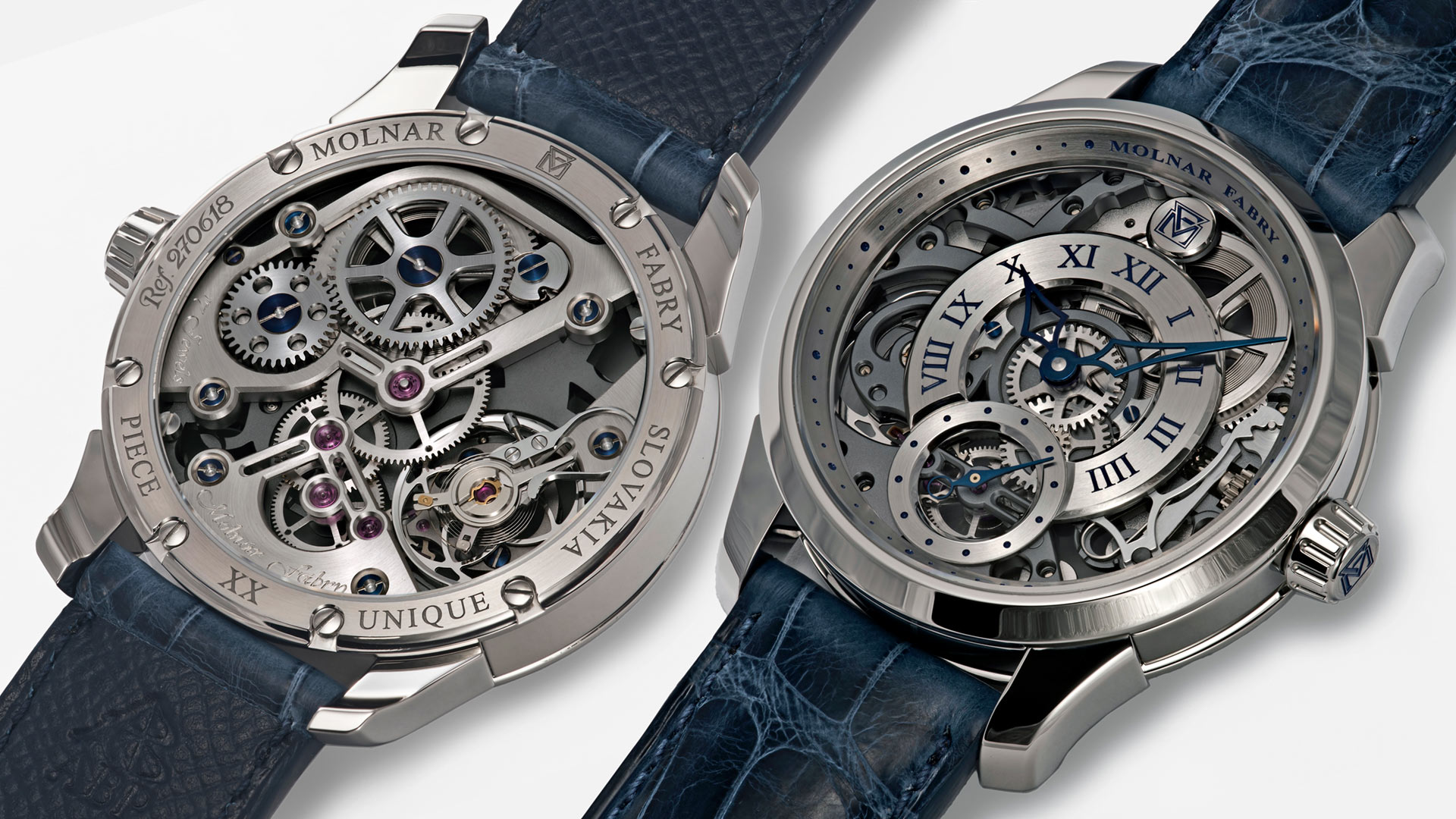 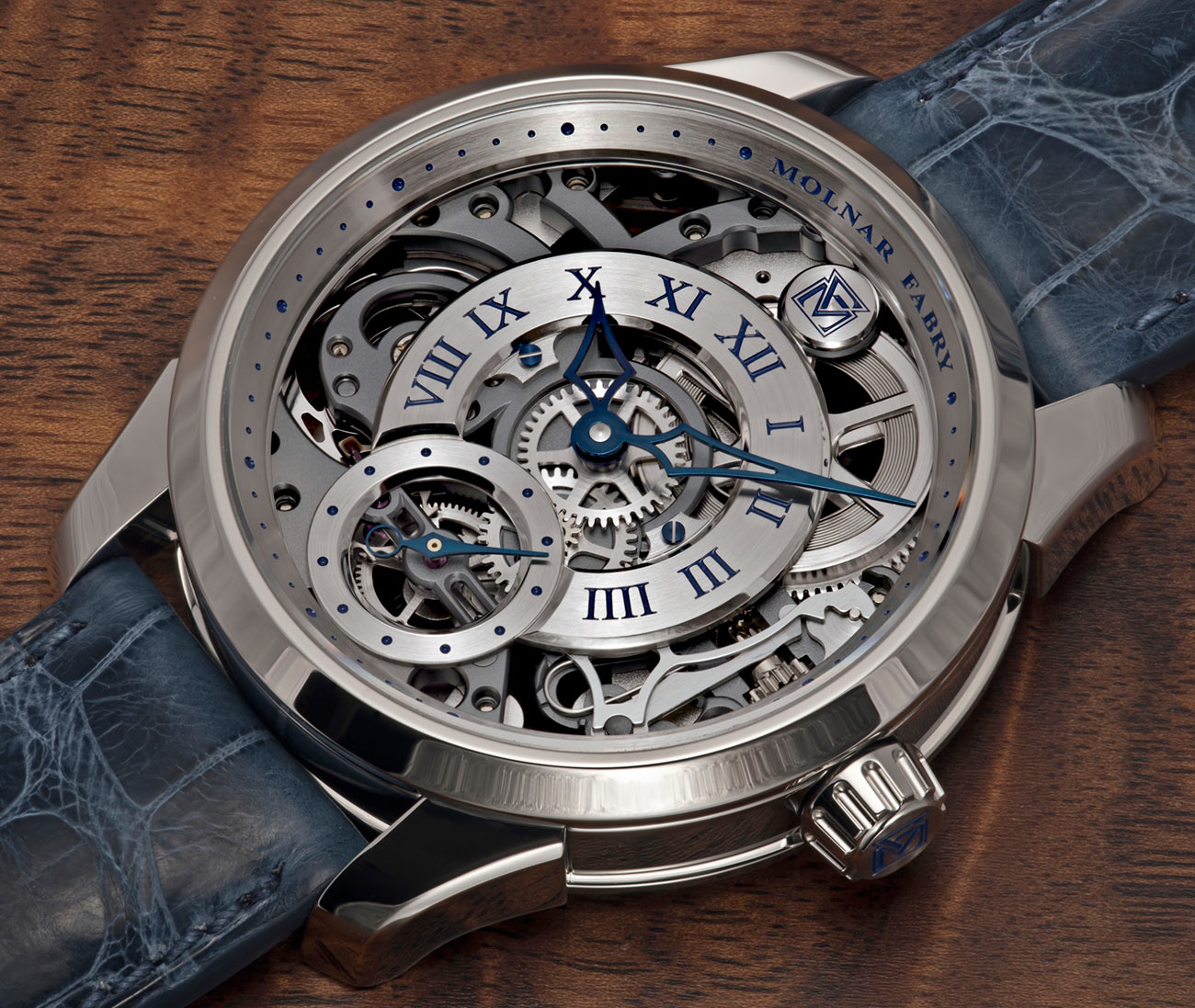 Mention independent watchmaking and you are probably thinking of watchmakers like Philippe Dufour and Kari Voutilainen. These are folks who build entire watches by hand from start to finish – in-house movements, dials, cases, and all that. However, there exists another type of independent watchmaking, and these are folks who don’t necessarily design or make their own movements but still make and handcraft certain aspects of the watches on their own. A fine example of this is Molnar Fabry, led by Michal Molnar and Igor Fabry, who take existing movements and modify and decorate them beyond recognition. The watch that you see here is their latest creation and it is called the Molnar Fabry Tech Art Skeleton. 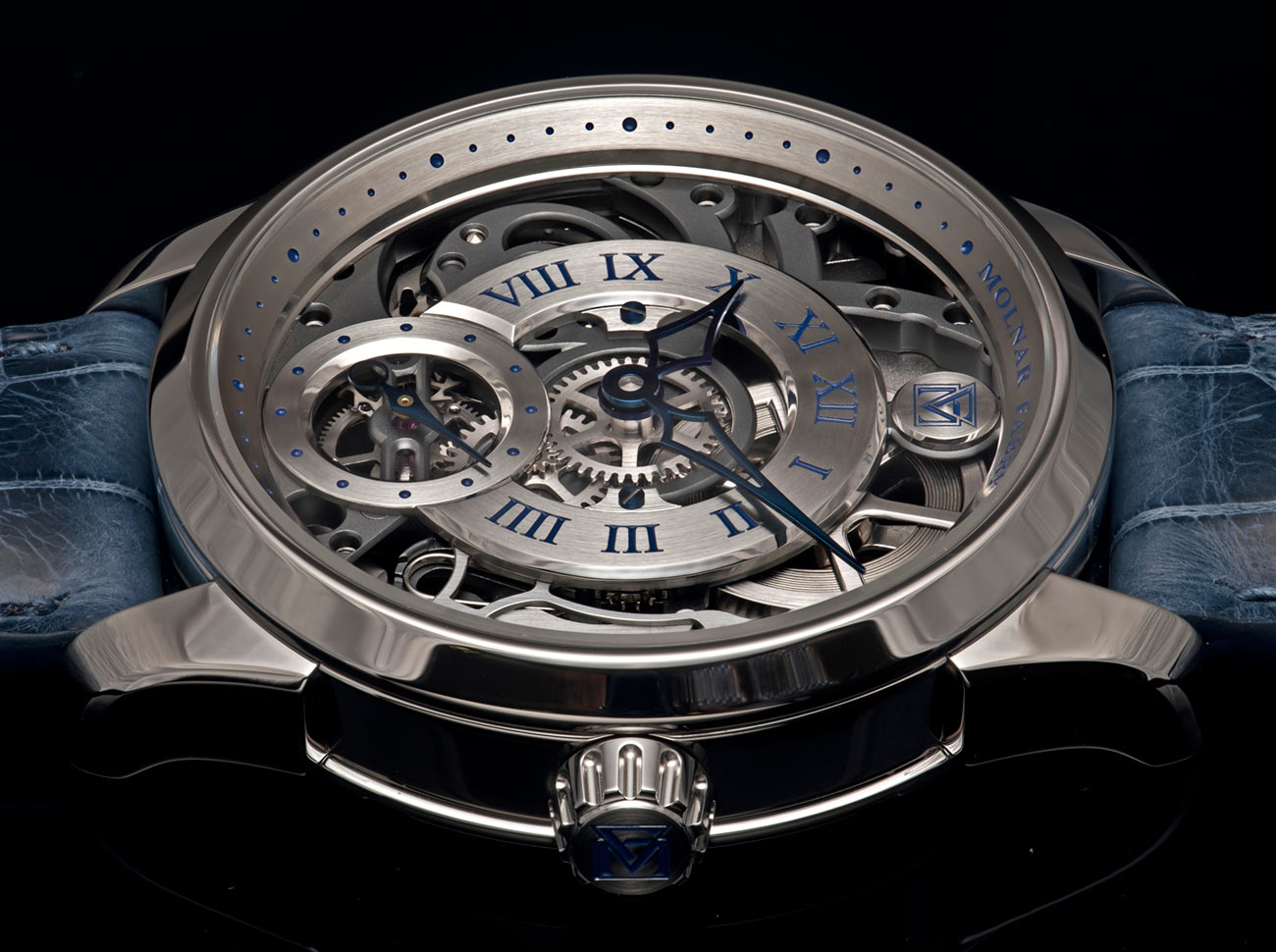 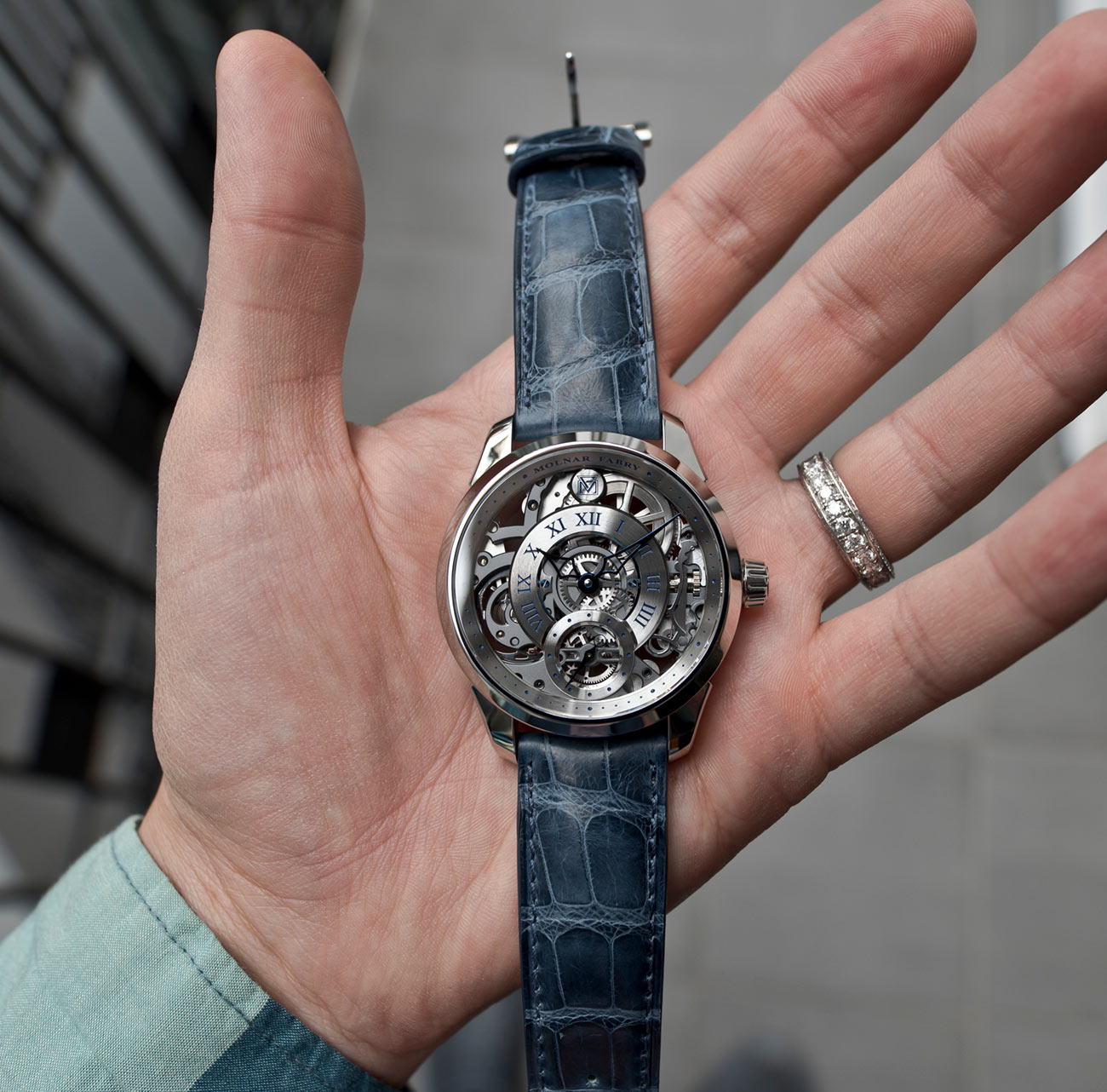 The Tech Art Skeleton comes in a 44mm wide in-house handmade stainless steel case. The case looks to be entirely mirror polished with thick lugs that have beveled edges. Also noteworthy is the conspicuous crown with no crown guards. This is necessary to make the watch easy to wind. The watch has a hand-wound movement, which we will get into later. 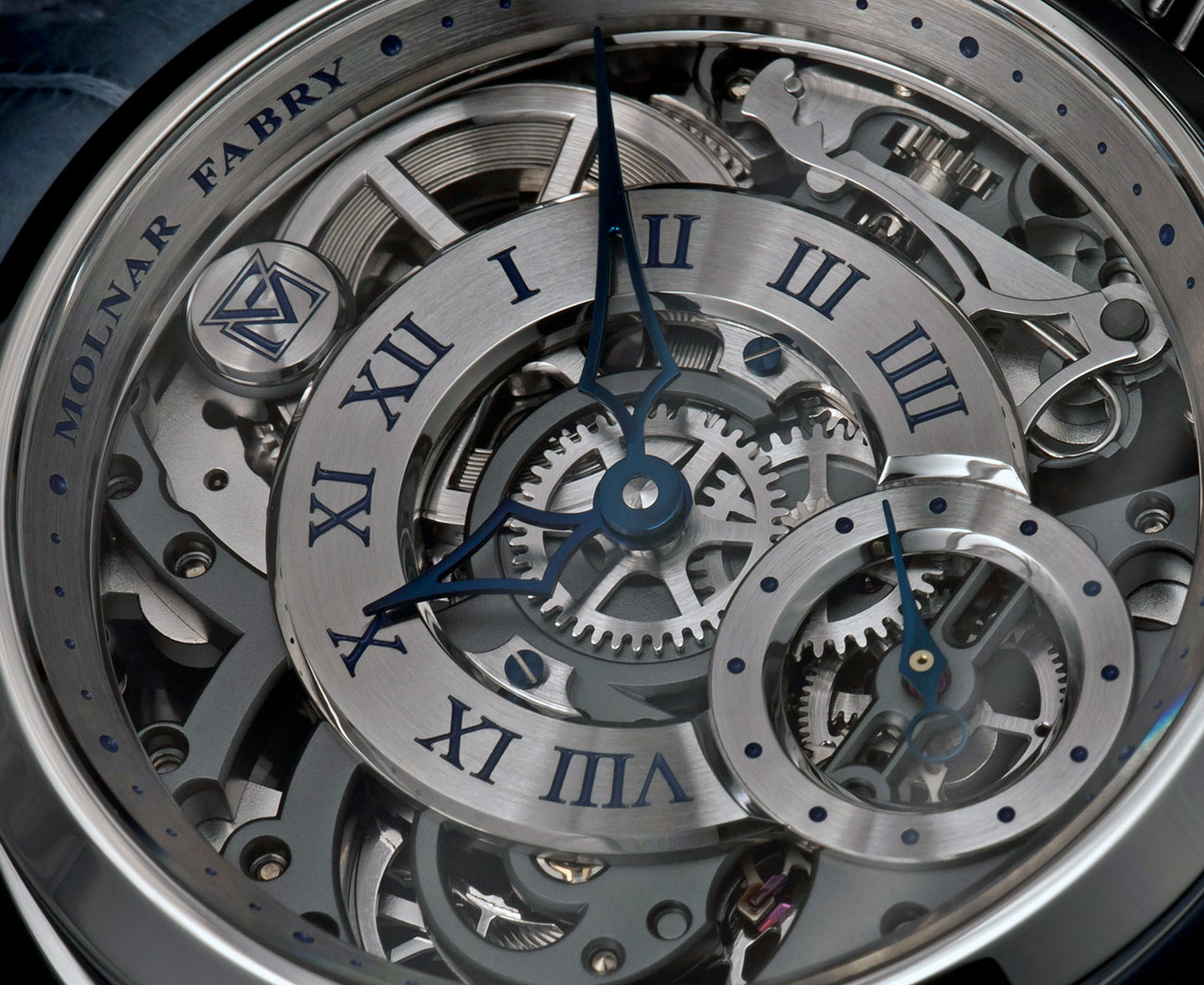 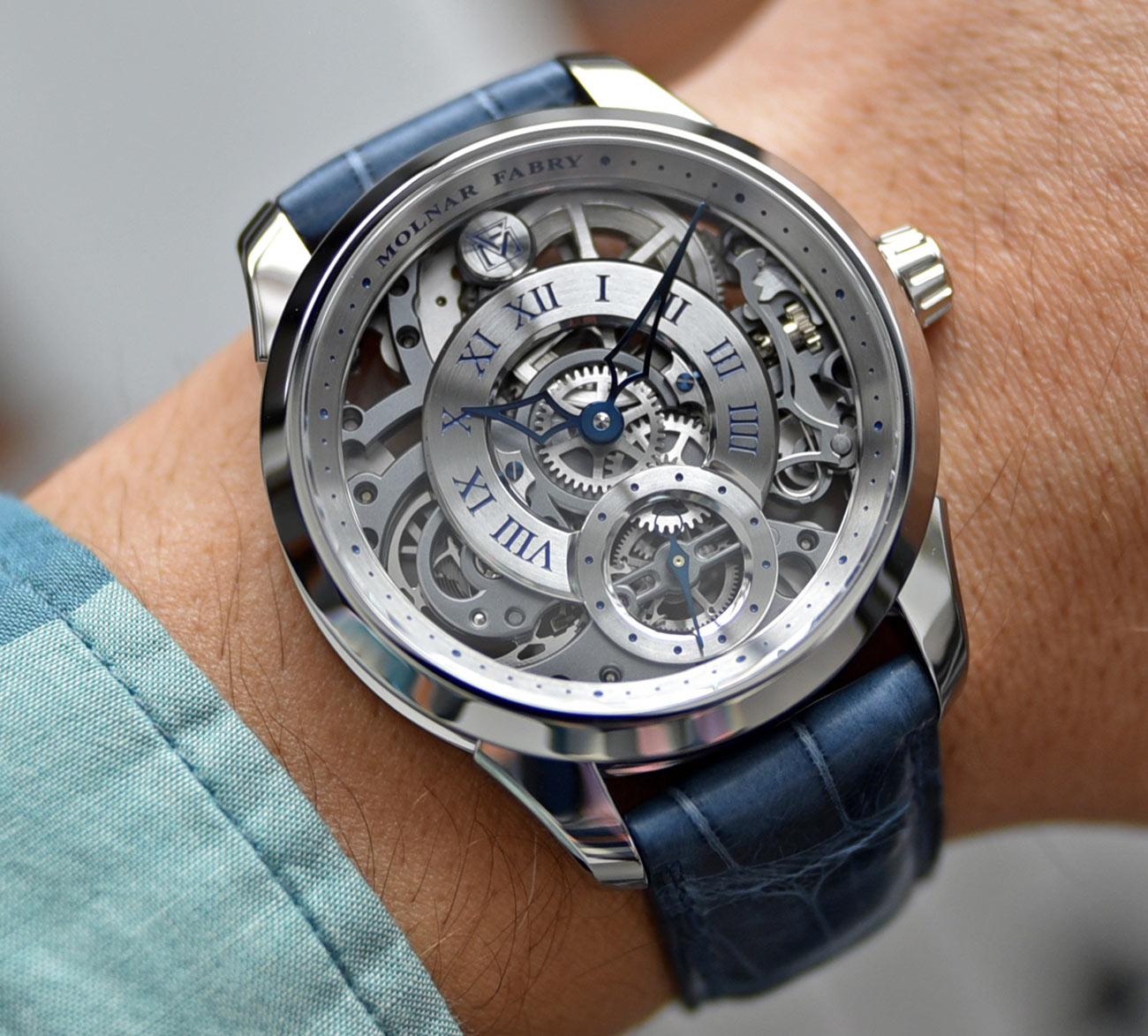 The dial is skeletonized but what is special about it is that it is made of stainless steel, which isn’t a common material used for dials (especially skeletonized ones) because of its hardness. As far as skeletonized watches go, the Molnar Fabry Tech Art Skeleton actually appears very legible. In the middle is a wide ring of stainless steel with the hour engraved upon it by hand in blue Roman numerals. Below it is another small ring for the subsidiary seconds. Both rings feature mirror polish hand beveled edges. The hour, minute, and second hands are all made out of blued steel, which provides contrast against the stainless steel rings. To complement the blued hands and markings on the dial, the Tech Art Skeleton comes with a hand-made, denim blue alligator leather strap made by famous Parisian strap maker ABP Paris. 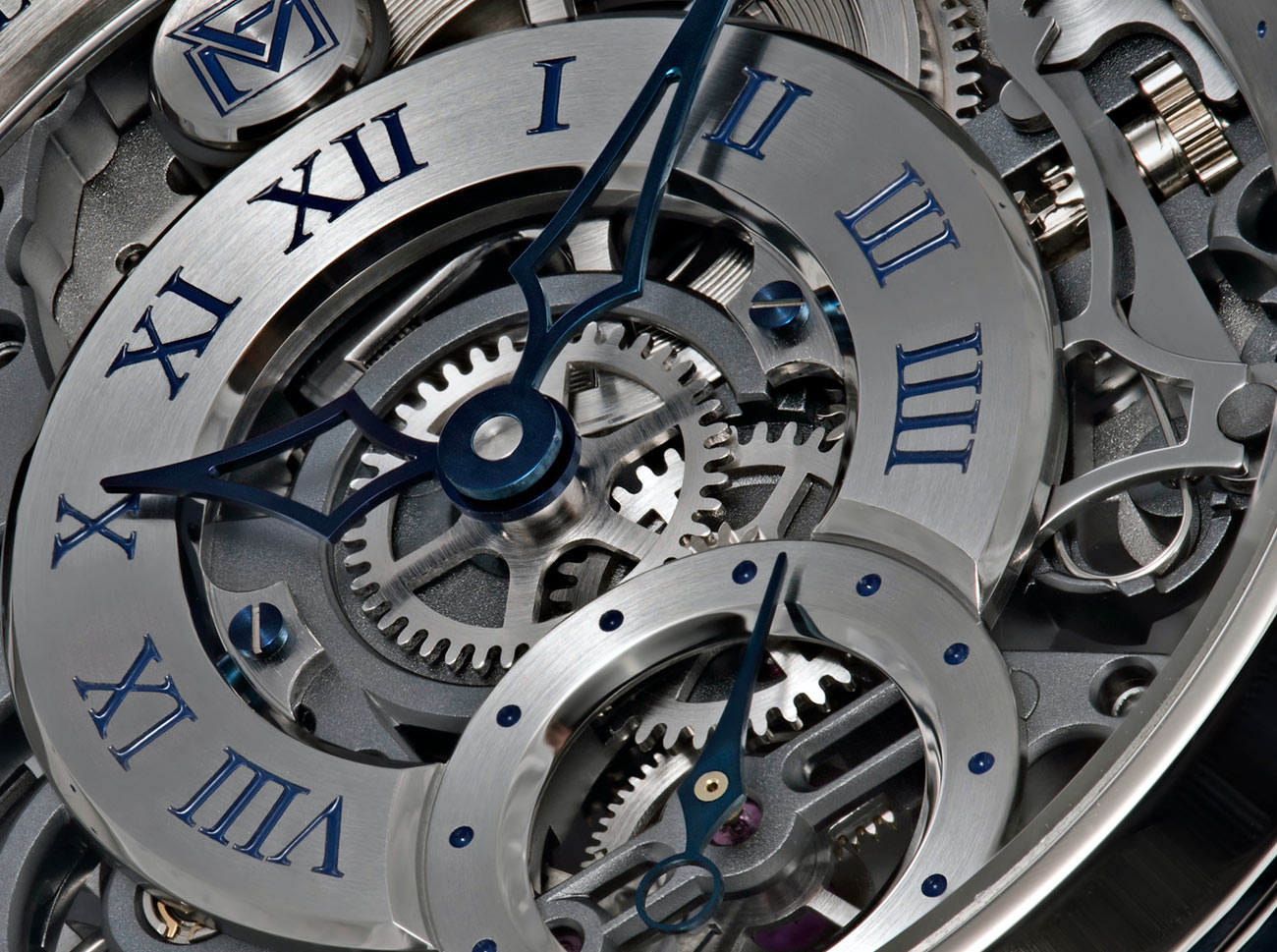 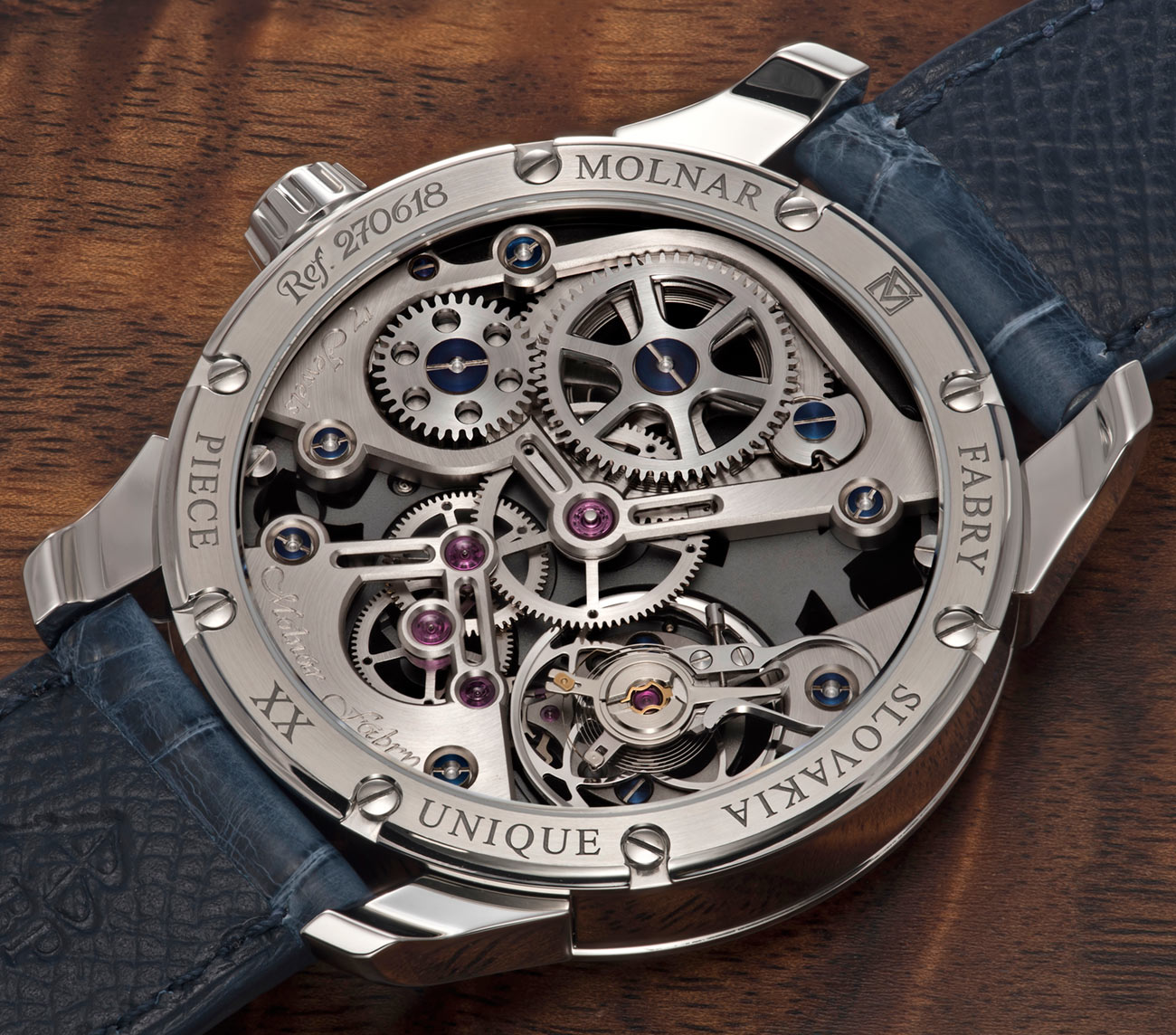 The movement within is actually the good old Unitas 6498, which was chosen primarily for its large size. The skeletonized bridges are beveled and have a sand-blasted black rhodium finish to provide contrast on the dial side. The screws in the movement are also blued and some feature unconventional screw heads, which suggests that they are made in-house. Molnar Fabry also modifies the balance wheel and uses their own in-house version which has an unusual but attractive pattern. Although the movement has been modified aesthetically, it retains most of its functional specifications, so it beats at 2.5Hz and has a power reserve of around 48 hours. That said, Molnar Fabry does regulate it to ensure that it keeps time with greater precision than your run-of-the-mill Unitas 6498. 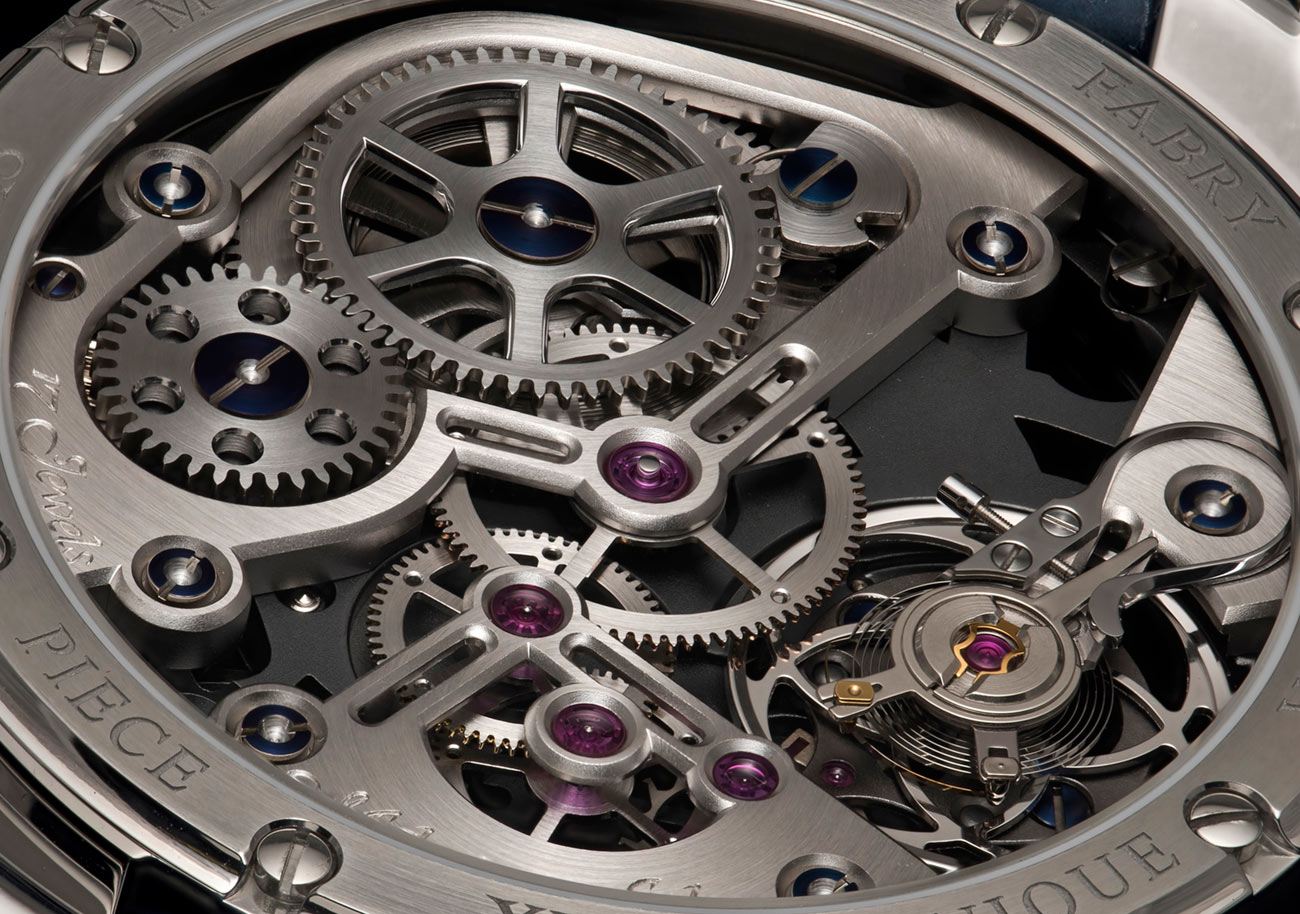 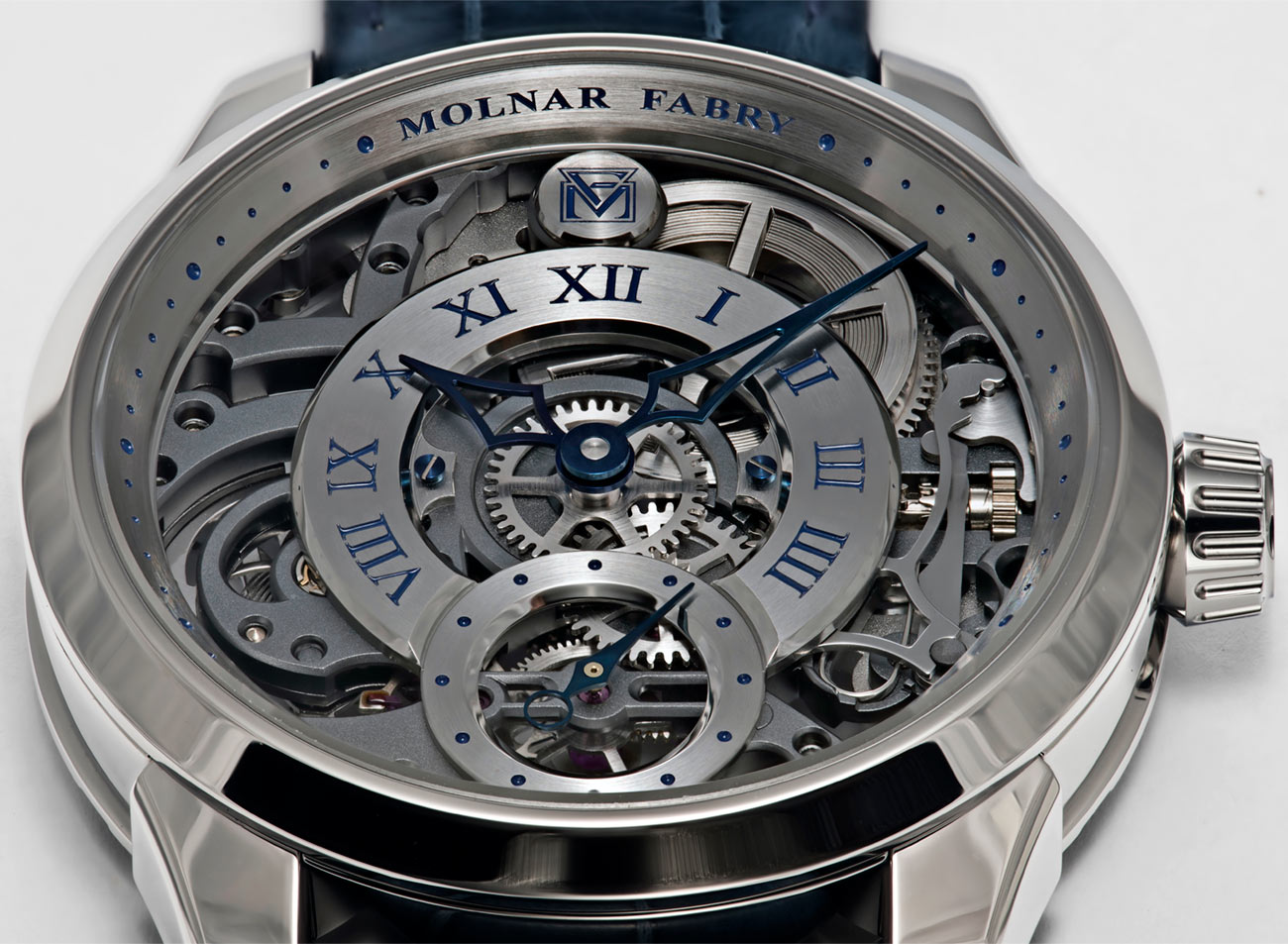