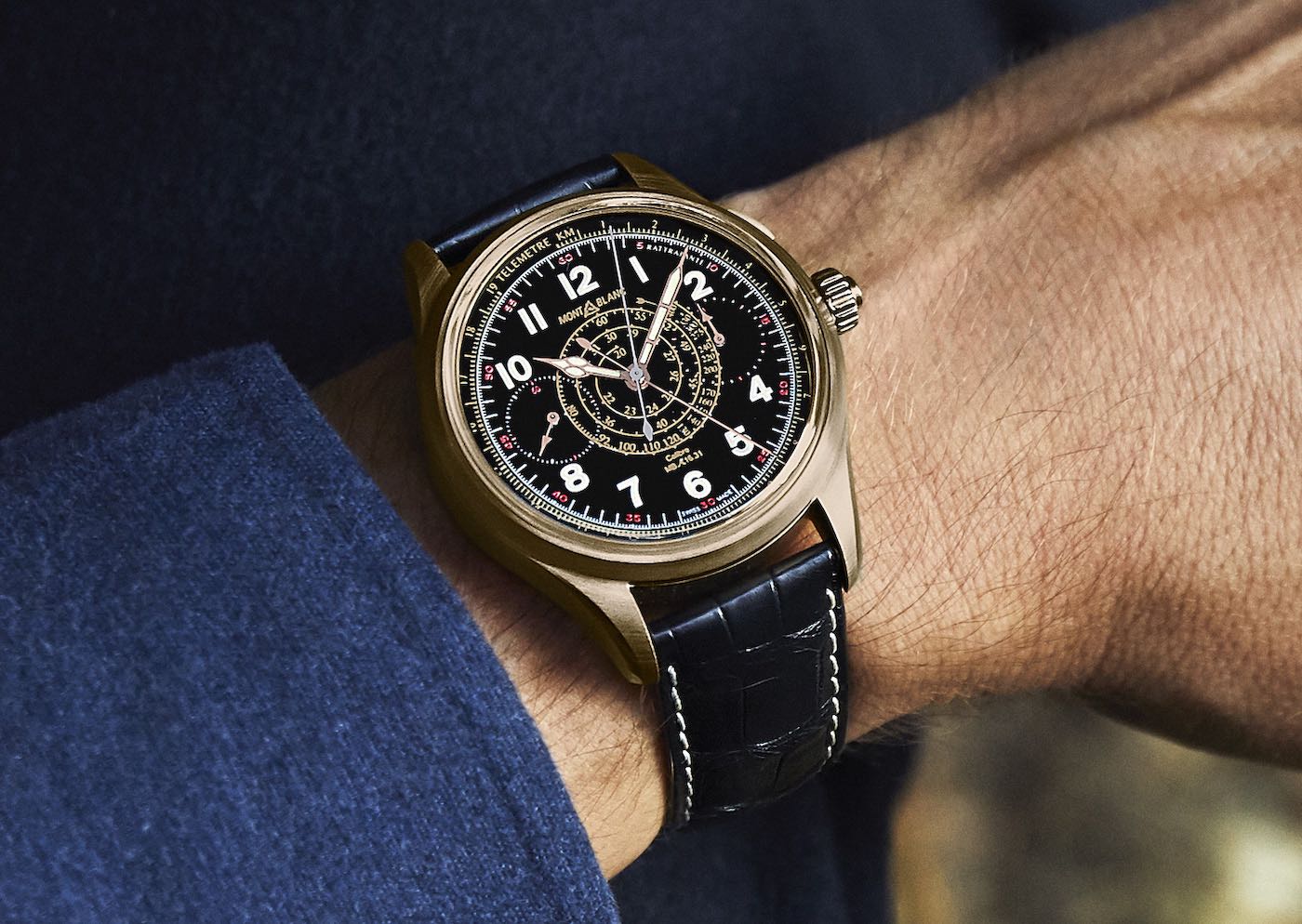 The Montblanc 1858 Split Second Chronograph limited-edition watch that premiered at SIHH 2019 finally hits the market today. Production of this handsome new watch will be limited to just 100 pieces. When I started out in watchmaking, I had a soft spot for Montblanc. That had faded until Minerva-inspired timepieces started creeping onto the market. Any reference, either aesthetically or mechanically, to that esteemed manufacture gets my heart racing. And in light of this piece’s strict limitation, I find myself lamenting there will be so few of these attractive throwbacks entering the market.

In order to understand the stylistic roots of this watch, we need to dive into the history of the Minerva watch company and unpack how that respected manufacture is linked to the modern day brand that is Montblanc. 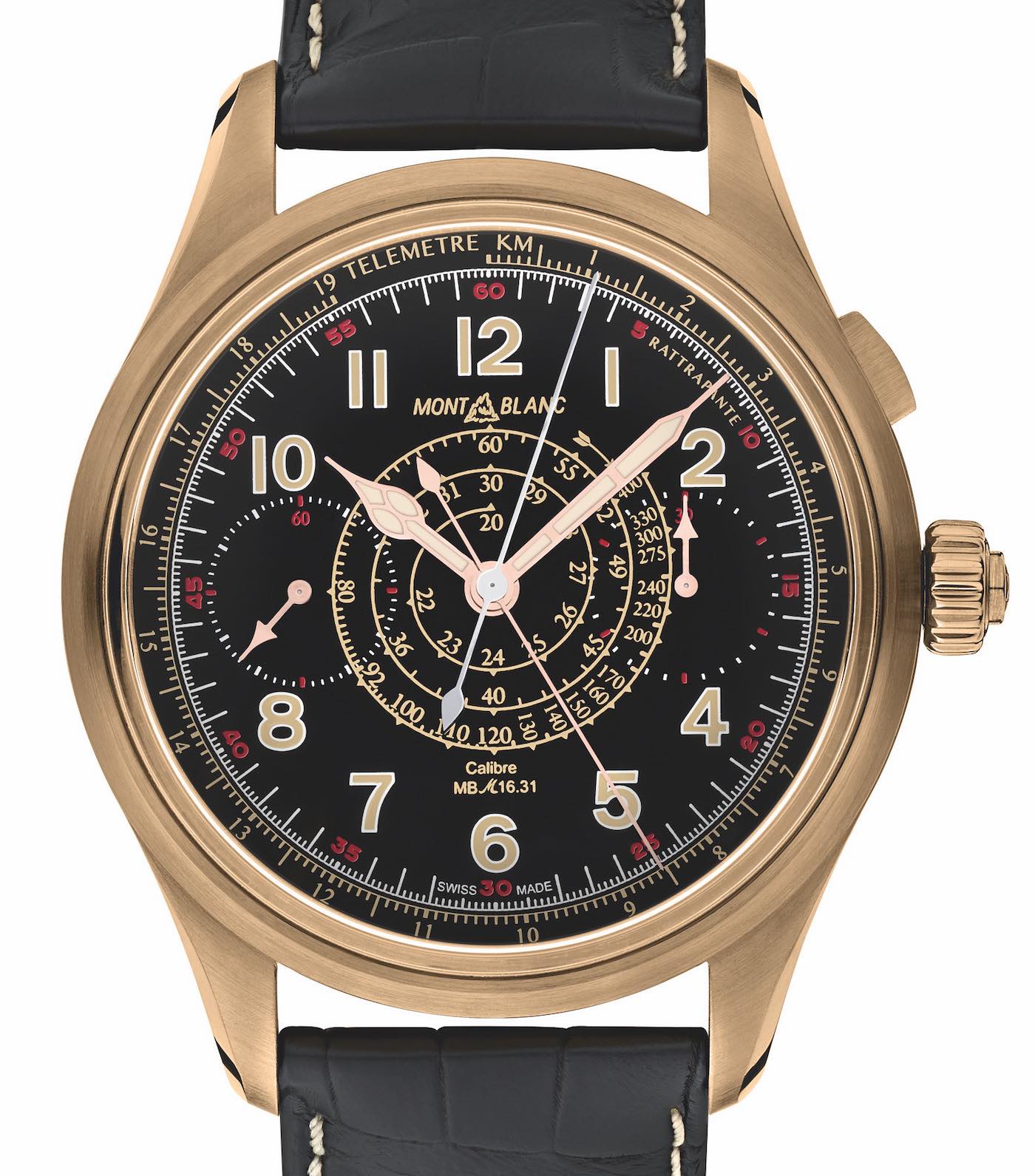 The Brand Behind the Original

Minerva’s journey began in 1858 in Villeret, Switzerland, when two brothers, Charles and Hyppolite Robert, founded H. & C. Robert. The company would undergo several name modifications (and some familial shuffling at the top table) over the next 70 years before the entire company was renamed Minerva (originally one of many subsidiary brands produced by the company that was, for most of that time, known as Robert Frères Villeret) in 1929.

The Minerva manufacture enjoyed great success during the 20th century. Operating in the same location in Villeret from 1902 until the company’s acquisition by Richemont in 2006 (and right up until the present day) was quite a remarkable stretch of consistency given the tumultuous times faced by the industry. Minerva was responsible for some excellent movements — especially chronographs — during its independent years.

After Richemont bought the company, it was basically assigned to Montblanc as its new watchmaking division. The result of this acquisition, effective merger, and subsequent products creates an interesting fusion for which I can think of very few notable parallels in the watchmaking industry. Montblanc was always known for the excellence of its pens. Their foray into watchmaking began as an apparent capitalization on a well-known name and seemed to be limited in ambition to the creation of attractive wristwatches. Now, guided by Richemont, the brand has become the custodian of a manufacture whose history means a great deal to the industry and many of us in it. 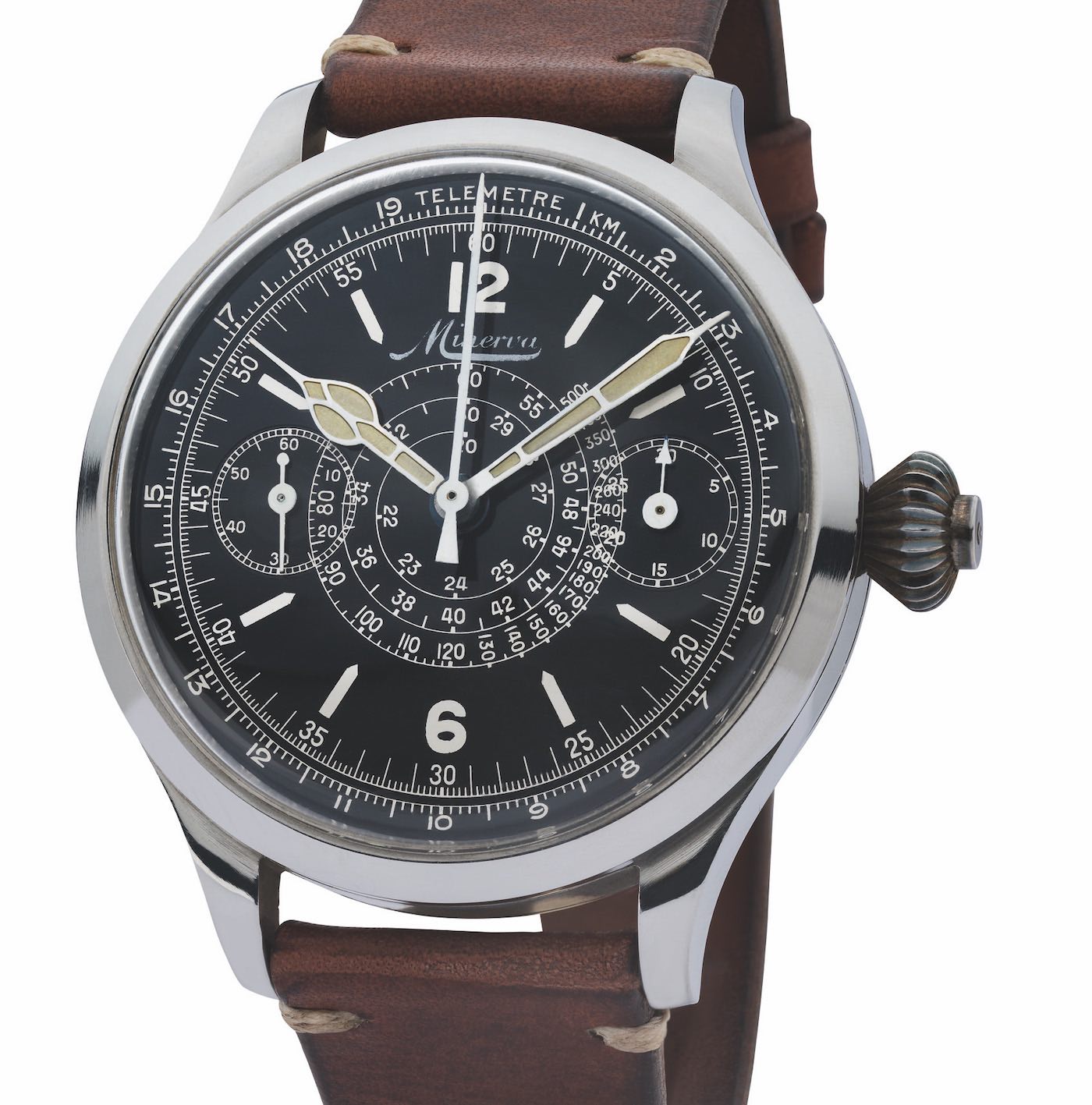 The bronze case is a chunky 44mm-wide and 14.5mm-tall, although it does pack quite a lot of functionality into the package at that size. The scratch-resistant domed sapphire is coated not only with anti-reflective material but also an anti-magnetic layer to protect the thin hands from being affected by magnetic fields. The caseback, as is often the way with bronze-cased watches, is made from a different material. This time, Montblanc has opted for titanium. Although I never like the visual of these contrasting materials off the wrist, it does make a lot of sense from the perspective of oxidization (which would occur heavily on a caseback, due to its being in constant contact with your skin), and in terms of comfort, titanium is a nice choice because of its conductivity (which results in immediate warmth to the touch).

The monopusher crown is made from bronze and embellished with the Montblanc logo. The single user at 2 o’clock is required to operate the split-second chronograph function. 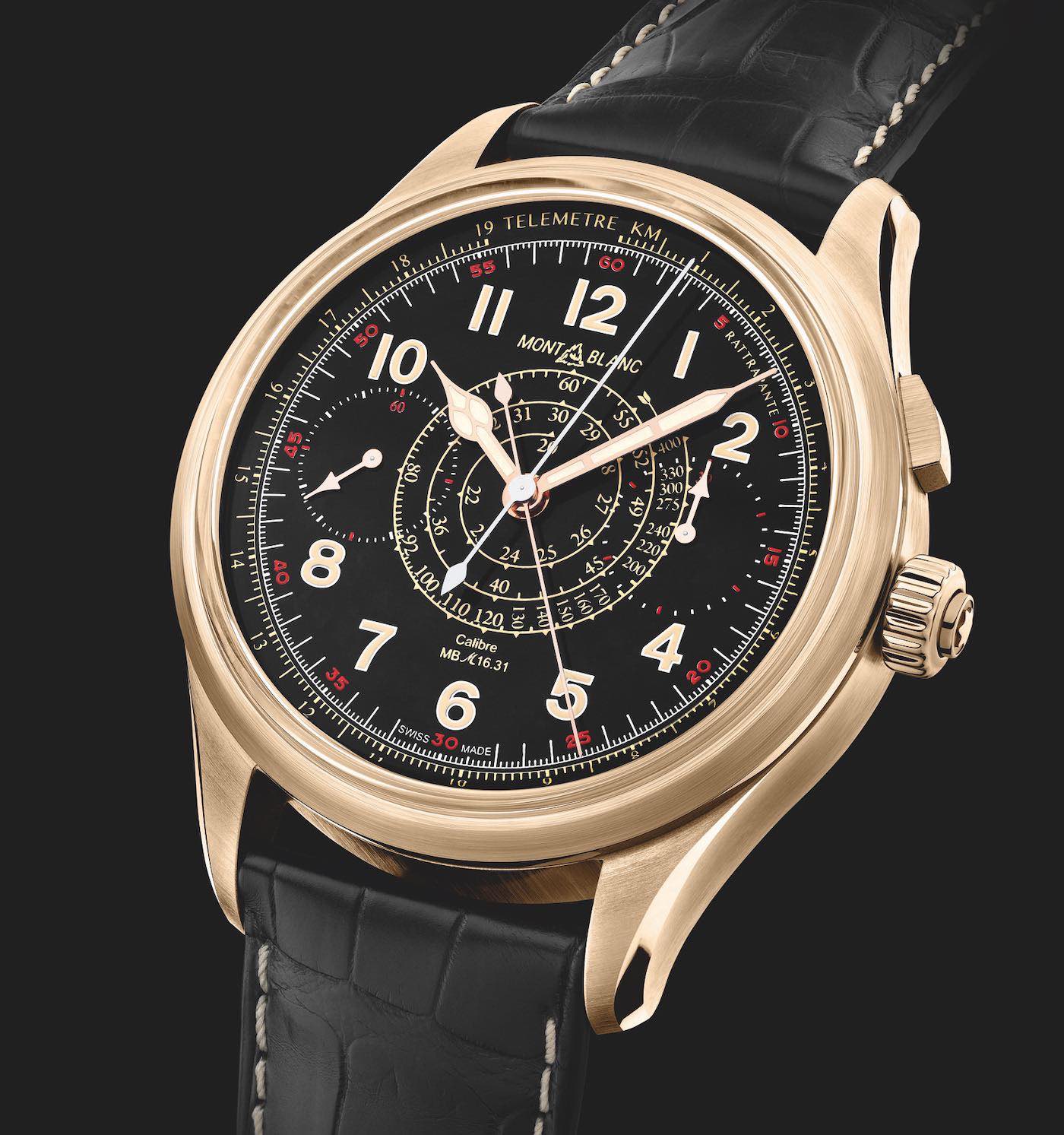 The dial, while still highly legible (and incredibly attractive due to its warm, vintage colorway) is perhaps not as immediately readable as the original upon which it is based. This is likely due to the starker contrast on the Minerva dial. Nonetheless, the black-lacquered dial with large beige Arabic numerals coated with Super-LumiNova provides a great backdrop. The luminescent hour and minute hands are plated with 18k red gold. The central chronograph hand is also red gold plated, as are the two sub-dial hands, while the split second hand stands out, colored a stark white.

Around the edge of the dial runs a telemeter scale. This is my particular favorite scale for a chronograph to feature (because I think it’s the most likely one to be used in real life). A telemeter enables the wearer to gauge their distance from a phenomenon that is both visible and audible (for example, lightning). The wearer starts the chronograph (in this instance by depressing the monopusher at 3 o’clock) when the phenomenon is seen, and stopping it when the associated sound is heard. The scale works on the premise that sound travels at about 340 meters per second.

But fans of tachymeters (scales used for measuring the speed of an object over a known distance) need not fear. The Montblanc 1858 Split Second Chronograph watch features one of these, too. It is located in the center of the dial in a colimaçon (spiral) shape. The advantage of the tachymeter curling back around on itself is that speed can be measured over distances that take up to three minutes to travel, as opposed to one minute, as is the norm. 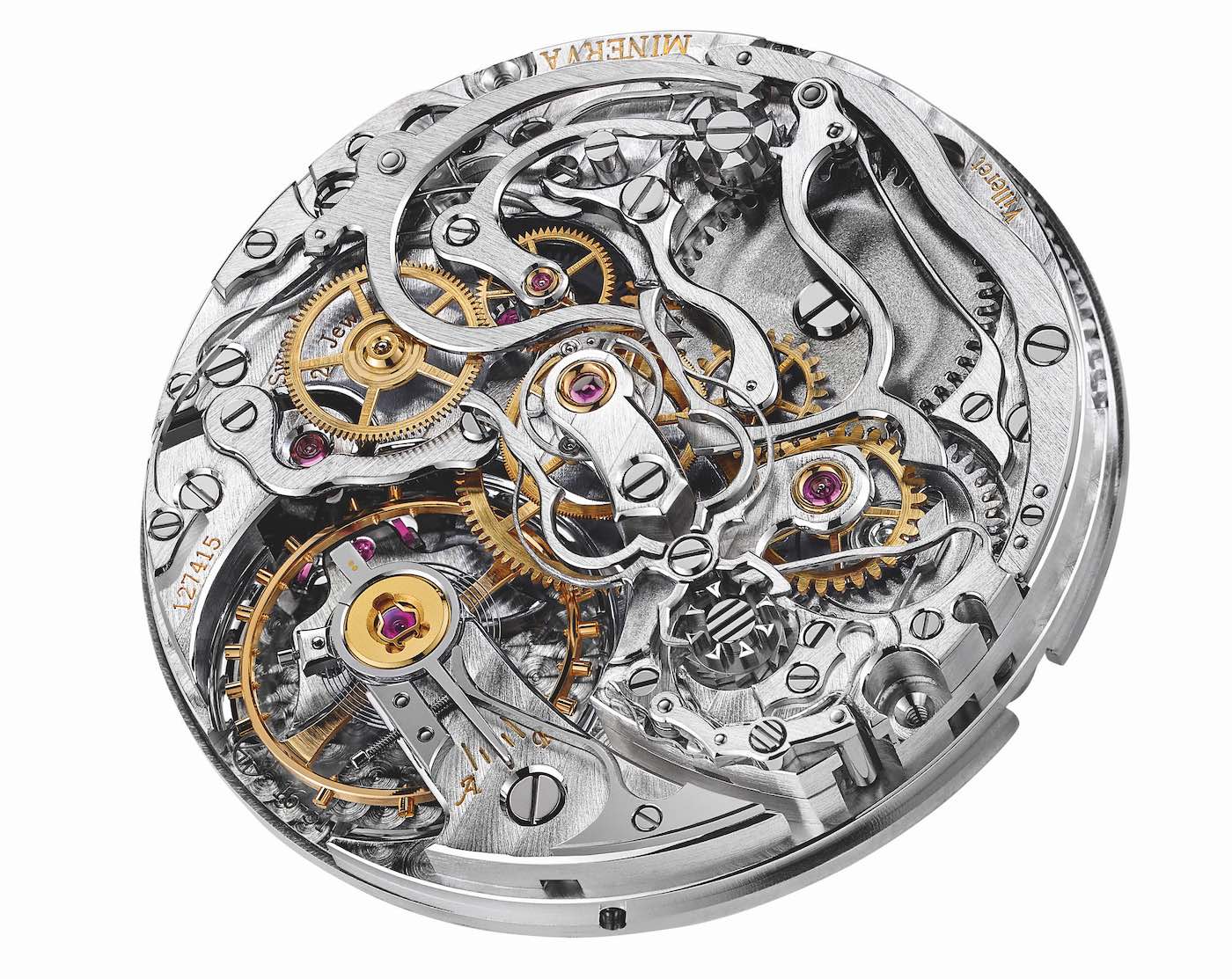 Combined with these two scales is a complex “rattrapante” (split second) complication, which has been developed in-house. This function enables the measurement of intermediate times without interrupting the ongoing measurement of the main chronograph counter.

The movement that powers the new Montblanc 1858 Split Second Chronograph Limited Edition watch is the chronograph caliber MB M16.31, which is based on the original Minerva caliber 17.29, first released in the 1930s. Twin column wheels act as the control components of the chronograph and rattrapante mechanisms, while a large, slow-moving (18,000vph) screw balance pushes the power reserve of this rather high-drain movement to a sufficient 50 hours.

Minerva was a revered manufacture. The movements were elegant, and the watches that bore the name are timeless classics. To see them reborn under the Montblanc banner is heartwarming. Although such a venture could have gone awry if treated with a heavy hand, the result is very often so attractive, and so pleasingly faithful to the golden era of Minerva watchmaking, I think Montblanc more than gets away with this (and should, in fact, be lauded for their efforts to preserve the heritage of the jewel in their watchmaking crown). The Montblanc 1858 Split Second Chronograph Watch is limited to 100 pieces and will retail for $31,000. Learn more at montblanc.com.