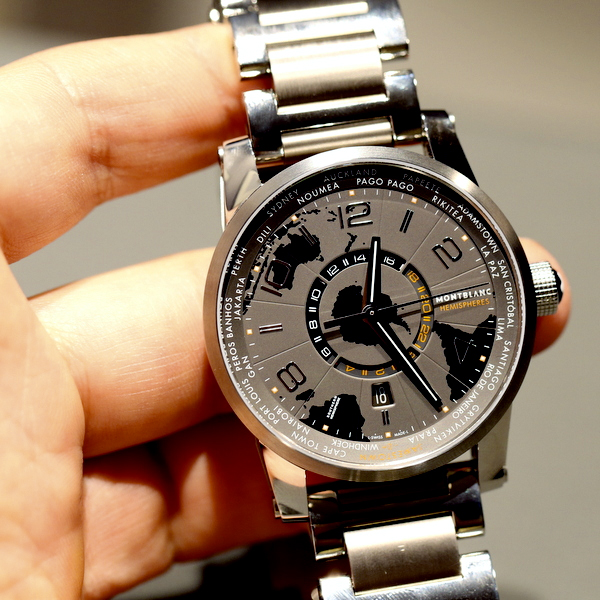 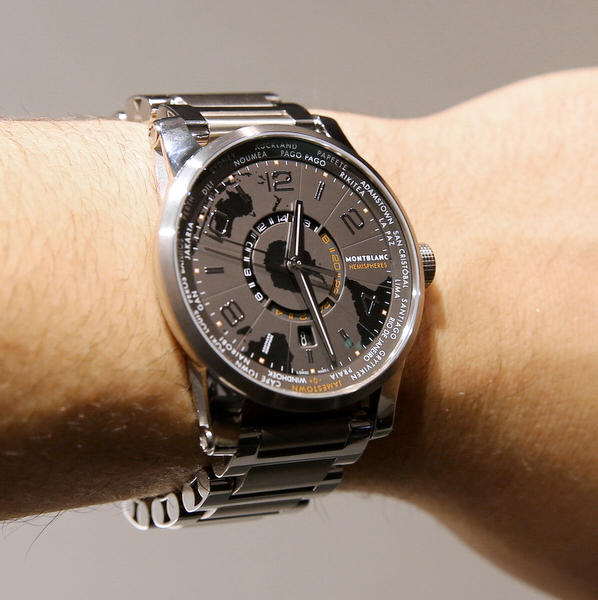 We wore a new Montblanc Timewalker model for a little while during SIHH, so we thought you should know a little bit about it. There seems to have been a resurgence in world-timer watches these days among many brands. In many ways this is understandable given the increasingly global nature of our world. No longer is the simple GMT adequate anymore. Knowing only two time-zones is so passé when world-timers offer the possibility of reading off all the time-zones of the world at one glance. Well all of the “normal” timezones. We like to conveniently forget the dozen or so places who deem it necessary to cut the hours up.

Montblanc’s latest Timewalker watch is the World Time Hemispheres and enters into this crowded field, with a few quirky features that set it apart. 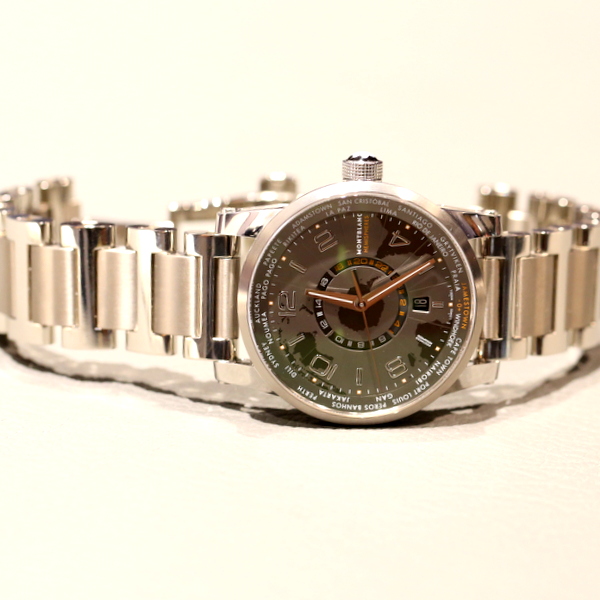 Now before I start, I wish to relate a rather embarrassing story connected to this watch. So hear me out, and let me get it out of the way right now.

I received this Montblanc Timewalker World Time Hemispheres from ABTW editor Ariel Adams at the SIHH. Since I have always been partial to world-timers I immediately jumped on it. It was when I wanted to set the time that I ran into a problem. Looking at the cities around the dial, I was unable to find my reference city of London.

No biggie I thought. Some other city on the dial would probably be the same as GMT. However when I looked closer, I saw some cities that I recognized, and many others that I had not heard of before. Without knowing these strange cities, I was unable to figure out the GMT time. Embarrassing for sure.

Now I have to say that I received this watch with no information about it, not even the name. Having seen and handled many world-timers before, I could not allow myself to admit that I did not understand this watch. I handed it to Ariel, who spent some time with it, and he too was unable to figure it out (though admittedly it had been a long day).

Some hours later, I noticed the country near 11’o clock looked like Australia, then realized that all the cities around the flange, (or at least those I knew) were in the Southern Hemisphere, plus the fact that the words “Southern Hemisphere” is printed right there on the dial. We put two and two together and finally figured out how to read and set the watch. Next time we will let Montblanc and other brands brief us before getting into new pieces.

Now, I’ve spent some time relating this story for a very good reason, and that is, that this particular model, the Southern Hemisphere version, won’t really be very easy to use as a world-timer if you’ve been familiar with other world timers before. 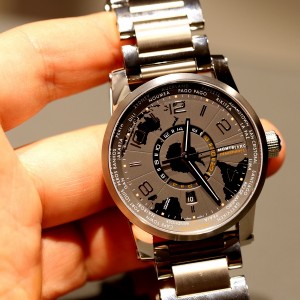 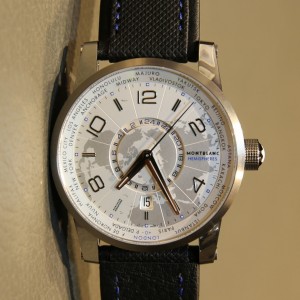 You see, the Northern Hemisphere versions contain the more traditionally known cities that adorn the dials of most world-timers, cities like London, New York and Tokyo. If this was the version I had received first, this review would be very different. When meeting with Montblanc CEO Lutz Bethge, Ariel asked what this was all about. Lutz, with his typical warm smile and child-like sense of fun simply returned “it was something different, we didn’t want to do the same thing as everyone else.”

As it stands by itself, it is an interesting concept to divide the two versions into Northern and Southern Hemispheres. However, that I was given the Southern Hemisphere version without knowing anything about it, and facing the problems I did, really brings to light the fact that most world-timers are northern hemisphere-centric. I certainly did not know that, and if you want a world-timer with a different list of cities than every other, then this one should be right up there on your list.

Whichever version you choose, you will be able to see the reference cities of the sister version engraved on the case-back at the corresponding locations on the dial. This is a nice touch that anchors the relationship between the two. Note that on the rear of the watch is a guide of the traditional 24 hour reference cities that helps you reclaim your ability to use the watch. We just needed to peel aside a few stickers to discover that. 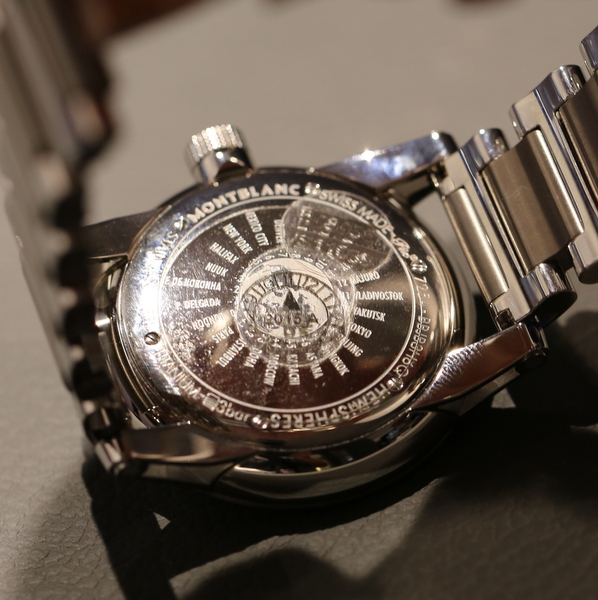 My comments on the watch however, only apply to the Southern Hemisphere version as this is the version under review.

So how does it fare as a world-timer? Disregarding the need to re-learn the associated cities with your time zone, I would say, not terrible, but it could be a bit better. The key thing that lets it down is the fact that the rotating 24 hour ring around the center is a little too small. As far as usability goes, it’s difficult to make out the exact hour associated with your city. If however, all you need is to see if it is day or night in the timezone of your choice, then I suppose that it should work quite well.

Also, take note that unlike many other world timers the city ring does not move, which is a further disappointment. It would have been nice if it were possible to get my reference city at any place that I wanted, but it is what it is. The city ring is actually a reworked GMT hand. So while it is independently set, it offers a little less user friendliness than traditional world timers. Having said that, it is also less expensive.

This particular model is in stainless steel and titanium which makes the watch feel lighter than it looks. The bezel brushed titanium while the case is polished steel. A moderately flat case at 43mm means that this watch sits close to your wrist and feels very comfortable. I’ve never been particularly partial to the case design of the Timewalker series, with its skeleton lugs and thin bezel coming across a little too architectural for me. However, I can see how the design holds together and for that I put it down to a matter of personal preference. Ariel on the other hand is a known lover of the Timewalker collection design. We can both agree that it is quite comfortable.

This Southern Hemisphere model comes with a grey toned dial with orange and white accents and a view of the earth from the South. I would have preferred this to come with a white dial, like the one on the Northern Hemisphere model. It would have certainly helped in terms of legibility, as I found that the grey and silver accents tended to blend into one another at certain angles, making the watch a little difficult to read quickly. 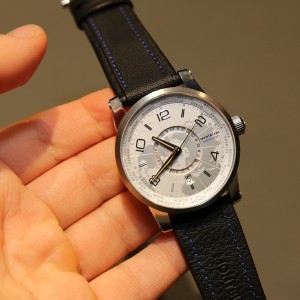 Having said that, the spaciousness of the dial, helped by the thin bezel, really gives a sense of lightness to the watch, which emphasizes the vastness of real space depicted. One really gets a sense of looking up (or down with the Northern model) at the earth. Having said that, legibility of the time is quite good.

All in all, it’s a bit of a quirky choice, and something of a mixed bag. I much prefer the Northern Hemisphere model in terms of the color scheme, overall usability and legibility. Plus the fact that it, unlike the Southern with its stainless steel and titanium bracelet, the Northern comes with a black calfskin strap with blue stitching which is a bit more modern and cool. Inside the watch is a modified base Swiss ETA automatic movement. Prices for the Montblanc Timewalker World Time Hemispheres start at $4,900 for the watch on a strap up to $5,700 on a bracelet. montblanc.com

Necessary Data
>Brand: Montblanc
>Model: Time Walk Word Time Hemispheres
>Price: $5,700 as reviewed
>Would reviewer personally wear it: No, prefers other Timewalker models.
>Friend we’d recommend it to first: Someone with a loyal brand affinity to Montblanc who simply must have a world timer for around $5,000.
>Best characteristic of watch: The Timewalker case and design never seems to get old, and the Hemisphere’s concept is amusing.
>Worst characteristic of watch: Too much a variation on a GMT movement without a city ring adjuster and a world time ring that is a bit too hard to read given its thin size.