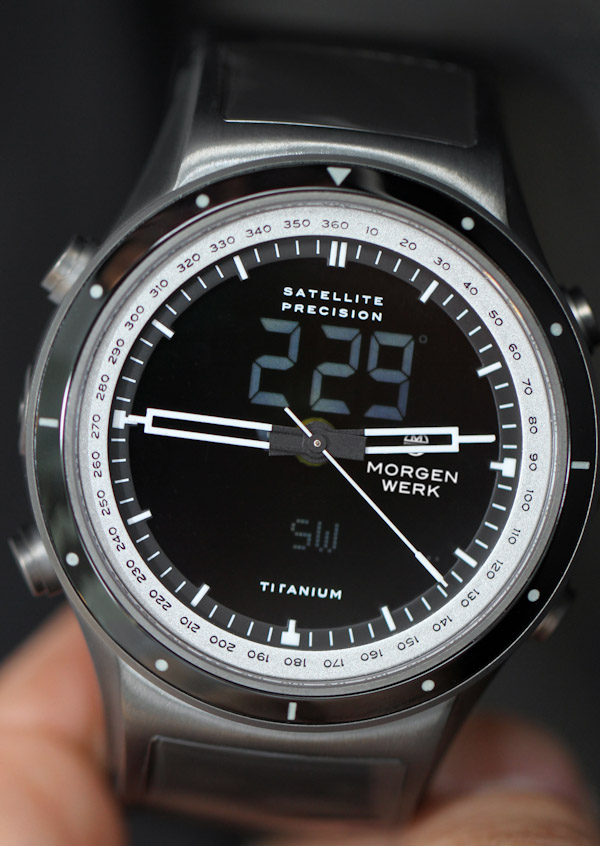 I met the chaps behind new watch brand Morgenwerk in Hong Kong of all places, though this is not an Asian watch brand. Morgenwerk comes from the people responsible for a small brand called Neolog out of Germany. What they showed me was damn impressive, and is officially THE watch my inner gadget lover craves this year – it is also affordable. There is a lot to say about the simply named Satellite Precision (SP) collection of watches, I will begin by mentioning a very cool feature which will make these timepieces more accurate than your mobile phones or computers. In fact, the SP collection as a whole is full of redundant features to promote accuracy – in a refreshingly obsessive style.

What do you get when you combine a thermo-compensated quartz movement with GPS satellite synching and a newly developed “self learning” movement that compensates for its own errors? Probably the most accurate timepiece in the world. You see, mobile phones have basic internal clocks that use inexpensive electronic quartz movements which can deviate by 15-30 seconds per month. They remain more accurate because they sync with a signal from the carrier on a regular basis – that is assuming the signal itself is accurate and available. Computers often work the same way by synching with an external source to remain on time. The thermo-compensated quartz movement in Satellite Precision watches is accurate to about 10 seconds a year without any external intervention. I don’t have enough time to discuss the nature of thermo-compensated movements in this article – but they make adjustments for variations in temperature that can effect the timing results of quartz movements. These Morgenwerk, and a few other high-end watches from brands such as Breitling, have them inside. Step two for accuracy in the SP collection is satellite synchronization. This feature allows the watches to receive signals from GPS satellites to not only remain accurate, but to update the watch with the timezone that you are currently in – no matter which one of the 39 global timezones you may find yourself. The system looks for data from up to six satellites at a time and then chooses three with the strongest signals to sync with. It takes about 8-90 seconds to sync. Between the thermo-compensated base movement and the satellite synchronization, the timepieces are no less than (plus/minus) accurate to three seconds a month. But it doesn’t stop there.

Morgenwerk’s icing on their titanium cake is a new AI system which “learns” the rate of error each time the watch syncs ups with a satellite. Basically, the watch recognizes how “off” it tends to be and compensates itself mathematically. So here is an example of how accurate it can get after synching up several times (and learning). Assuming you sync with a satellite just once a month, you are going to expect accuracy of no less than 0.8 seconds off per month in a Morgenwerk Satellite Precision watch. That is pretty damn cool, and very accurate.

“GPS watches” as they are often called, have become more popular over the last few years starting with some niche sport pieces. These often bulky timepieces also come with very short battery lives of less than a full day. In the last year Japanese brands Seiko and Citizen released their own watches that synchronize with satellites. Quite cool, the Citizen Eco-Drive Satellite Wave (hands-on here), and Seiko Astron GPS (hands-on here), were not only limited in their production, but also quite expensive. The German Morgenwerk Mark 1, Mark 2, and Mark 3 watches are priced less than these Japanese watches, and have some additional features. I will however remind you that Seiko and Citizen satellite watches do feature light-power generation and are worth learning about if this style of watch interests you. Morgenwerk SP watches will need a recharge from time to time, but there is a lot of good news in the power department. While you won’t need to replace the batteries of an SP watch, you will need to recharge the timepiece using an external unit. The good news is that with weekly satellite syncs, the watch will go 2-3 months between charges. There is also a power saving mode that extends the battery life up to 15 months without having it sync up with the sky.

Here is where it gets really cool – the external charging base. Each SP watch comes with a puck-shaped charger that does a few things. To put the watch in the dock you pull out part of the side (cool), and the charger can be hooked up with USB to a computer or AC adapter for juice. There is more. As you can see, the charger even has a solar panel on it… and a battery inside. While solar power generation isn’t quick, you can place the charger in the sun if you are away from a power source and it will either directly charge the watch or a battery in the charger which can store enough energy to fully charge the battery inside of the timepiece twice over. This my friends is what happens when German engineering gets involved with a device such as this.

OK, now you get a basic idea of the Satellite Precision watch concept and how they work. Let’s talk about the watches themselves. For me, I would sum them up by saying that they are like a cross between Casio ProTrek and Porsche Design timepieces. That means a mixture of good looking modern design and lots of accessible functionality. There are going to be three versions of the Morgenwerk Satellite Precision watch at launch called the M1, M2, and M3 models (aka Mark 1, Mark 2, and Mark 3). The models will range in size as well as functionality, and have dials that contain either Arabic hour numerals or baton-style hour numerals. The Mark 1 will be the most simple Morgenwerk Satellite Precision watch in a 43.8mm wide (14mm thick) case that you can get in either steel or titanium. The dial is purely analog, but it does tell more than just the time. Using the pushers on the case you can see the date, as well as an indicator of what timezone you are currently located in. You can also see whether or not you are located in a place with daylight savings time in effect. The high-contrast dial is functional without being too boring. It is legible with a design that seems to mix military styling with Bauhaus aesthetics. Again, so Germanic and I love it.

While the Morgenwerk watch cases are metal, there are panels on the bottom and top lug structures which receive the satellite signals. Worried about the durability of these panels, Morgenwerk assured me that they are very hard and coated to be scratch resistant. They seemed to consider so many fine details, it didn’t surprise me that they ensured the panels would be secure as well. I also want to note that the watches you see before you are pre-production prototypes. That means little details and finishes on the final versions will be updated and upgraded. According to Morgenwerk, the Satellite Precision watches are water resistant to 50 meters – which is pretty good given the charging ports and other features. While it might be a while before there is a diving model, these are certainly watches meant to be worn and relied upon in the field. The way the design seems to gloss over the extreme nerd appeal is impressive. I’ve always said that for me, something like a Casio ProTrek is the ideal watch, assuming that I never want to impress anyone. With the SP watches you can have a gadget watch without looking like a nerd. That is actually sort of important in this industry.

The Morgenwerk Satellite Precision M2 is very similar to the M1 but in a larger 46mm wide case that is 15mm thick and only available in titanium. You’ll notice various finishes on the cases that offer either a darker black or more natural titanium finish. When the final watches come out we will know more about all the finishing options available. It is also worth noting that the dials use SuperLumiNova as lume for the hands and hour markers, and an AR coated sapphire crystal is used over the dial. Things start to get much more interesting with the Morgenwerk Satellite Precision M3 models. These are analog/digital watches that include a negative LCD panel (light indicators on a dark screen) behind the analog dial. Here is where Morgenwerk really competes with brands like Casio, Tissot, and Breitling in terms of functionality. The Mark 3 watches contain extra sensors to also include a compass, thermometer, barometer, and altimeter function into the timepiece. You’ll use a combination of the hands and digital display to read all that information. The M3 also has a full calendar (with an attractive display), chronograph, alarm, and weather forecasting tool. Plus, the various models and information displays are attractive and rather user-friendly to operate.

The Morgenwerk M3 is the largest of the three watches at 48mm wide and 16mm thick. Having said that, the pieces are still rather wearable given the titanium case material and overall design. When the final versions come out we will see all the strap options, as well as model variations available. I am pretty darn excited. If the Morgenwerk Satellite Precision collection is successful it will certainly be a disruptive product in the watch industry marrying good design and a ton of functionality. Especially for the price… Morgenwerk’s intended starting price for the M1 is $1,100, going up to $1,900 for a top-of-the-line M3 model – and each is said to be an individually numbered limited edition. That is still under $2,000 for their best watch, and these pack a lot of value. The price range will no doubt attract collectors, but what about more casual watch enthusiasts?

The over $1,000 price point is still hard to breach for the mass market, but Morgenwerk will likely position the Satellite Precision collection as a high-end “go anywhere” sports and adventure watch. There are also going to be a lot professional-use agencies which might find the piece interesting. Morgenwerk is further banking on the fact that satellite controlled watches will soon outshine watches that are controlled by radio signals from atomic clocks (which have a much more limited service area). Morgenwerk’s official website will launch at the beginning of 2013, with the first watches scheduled to ship around the spring time of 2013. We can’t wait.