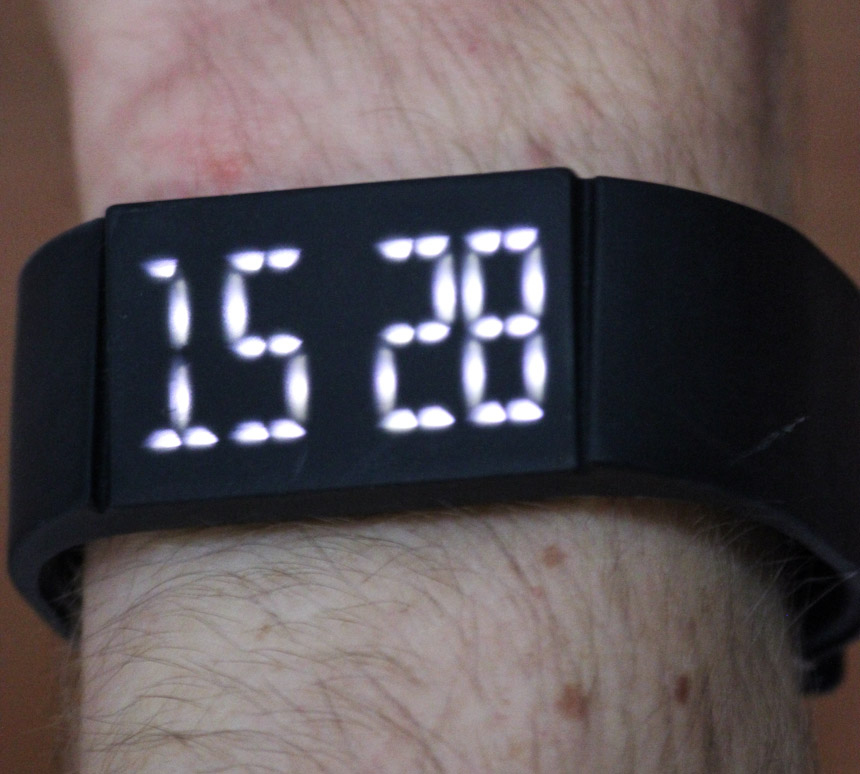 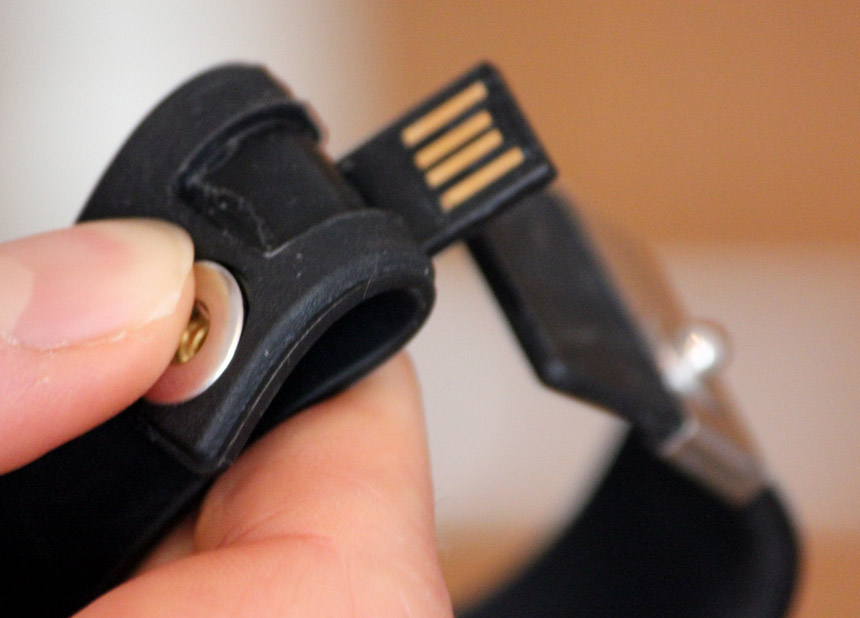 So how does the Mutewatch work? The company has shot an instructional video to explain its features, which might lead you to believe that it uses a pretty complicated user interface. In fact, the exact opposite is true. If you only want to wear it as a fashion item or to tell the time, just strap it on using a simple clipping mechanism and activate the LED display by moving your arm or touching the screen with your finger, causing it to light up for about two seconds. If not activated, the display will remain on standby mode to save on battery. In theory, a simple flick of the wrist is supposed to be enough to turn the Mutewatch on, but although the motion sensor does work reliably, you will really need to give the watch a full forty-five-degree-spin, as less will rarely be enough.

According to the technical specifications, the Mutewatch contains sensors measuring the light intensity of your surroundings and will adapt the display glow accordingly. In practice, it was hard for me to actually verify this, but regardless of this feature, it was definitely very easy to read both in bright sunlight and a dark room. One thing you’ll have to take note of, though, is that with the display directly facing you, rather than being tilted, you need to hold your arm stretched out in front of you, rather than turning your wrist towards you to tell the time. The idea is probably to allow you to read it while typing away on a keyboard, but does takes some time to get used to. 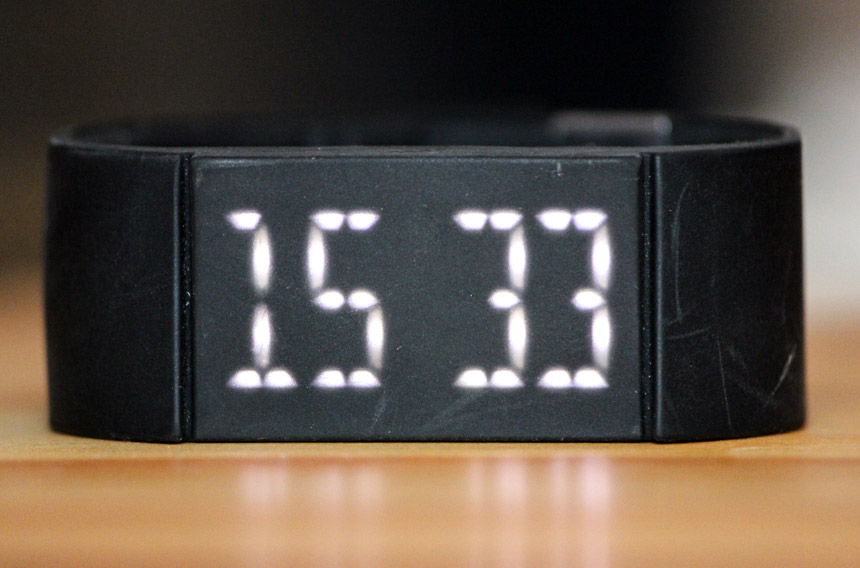 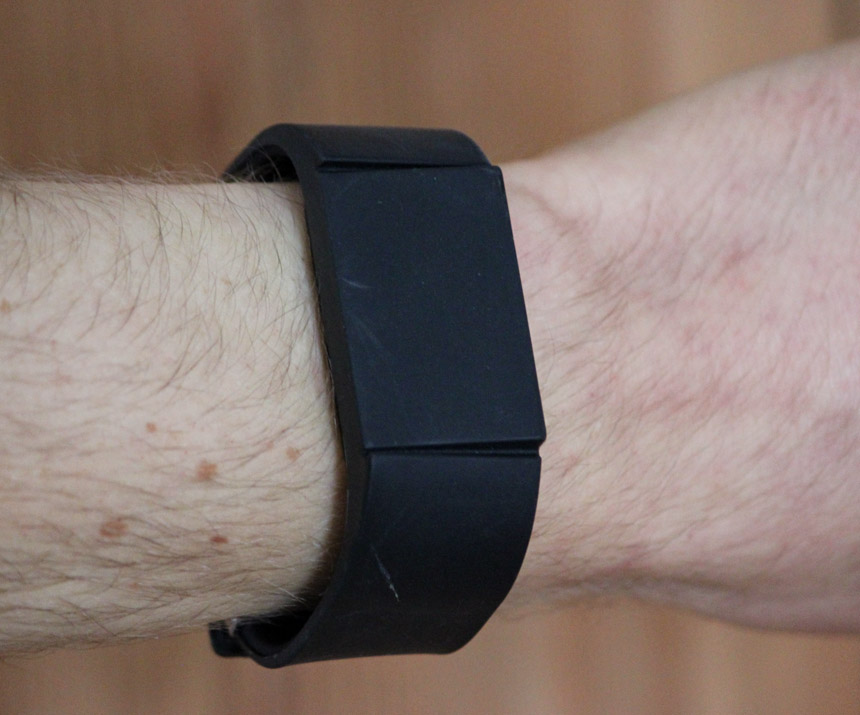 As mentioned, the Mutewatch contains various timer functions with a silent alarm and these may well be the actual selling point of the watch. To set an alarm on the watch, activate it by touching the screen with your finger, then navigate through the menu by swiping across it. Once you’ve reached the desired function, you can set it by moving your finger up and down to set a particular time for an alarm or for a countdown timer. Once the settings are correct, simply let go of the display to activate them. As a nice additional feature, you can adjust the length of the vibration to your personal needs.

After a short phase of getting used to the display, you can set alarms very quickly this way to, for example, set the timer for a dish you’re preparing in the kitchen, to remind you of a meeting, to indicate that your meditation session is over or that you’ve been spending too much time browsing this blog instead of getting something done. Another application the Mutewatch has often been recommended for is the so-called Pomodoro technique, which recommends working in activity blocks of 25 minutes separated by 3-4 minute breaks. The Pomodoro was originally designed for a regular kitchen timer, but that is obviously not an option when you’re working in a public place or if the constant ticking of the kitchen timer is too distracting. This is where the silent alarm of the Mutewatch comes in handy. 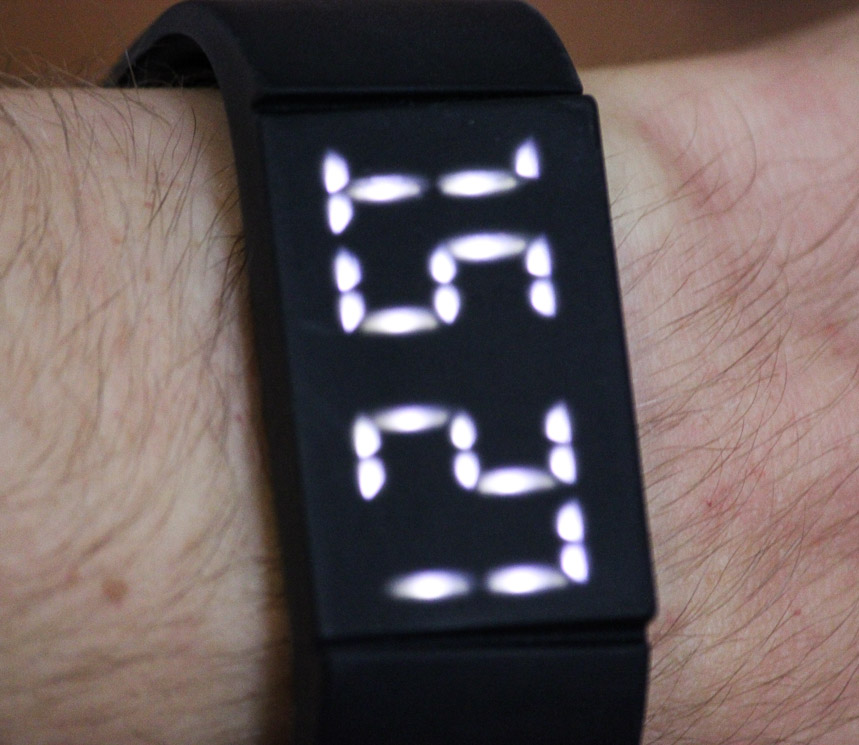 But can the Mutewatch really live up to its promise and wake you up in the morning without waking up your partner, as the founding myth to the product claims? I’ve tried the mute alarm for this purpose on various occasions. The first thing I found was that I needed some time for my body to recognise the vibration alarm at all – although this may vary depending on how deep your sleep is. The second thing is that, as with the vibration alarm of a mobile phone, it isn’t entirely silent either. Clearly, however, the faint sound produced by the vibrating case is a lot more quiet than a regular snooze alarm. After three tries, I did indeed wake up at the right time without disturbing my girlfriend– which makes the Mutewatch an excellent alternative to, say, a clock radio.

As a time management tool, the Mutewatch really is extremely useful and its comparatively long battery life – five days on average – is another strong selling point. I’m not 100% convinced with its touchscreen yet and the design is subject to taste and will only lend itself to particular occasions. But with its price having just been reduced to $199 (or 149 Euros), it won’t set you back too much even if you only intend to wear it in the house.

Necessary Data
>Brand: Mutewatch
>Model: Pure Black
>Price: $199
>Size: 45mm
>Would reviewer personally wear it: On occasion
>Friend we’d recommend it to first: People working from home.
>Worst characteristic of watch: Display is not as reactive as you’d wish.
>Best characteristic of watch: Setting the timers and alarms can be done faster and easier than with any other watch currently on the market.

About the author: Music journalist with a passion for watches. Tobias is the editor-in-chief of experimental music magazine tokafi and the publisher of the 15 Questions website.
Page 2 of 2 Prev Next
Advertising Message