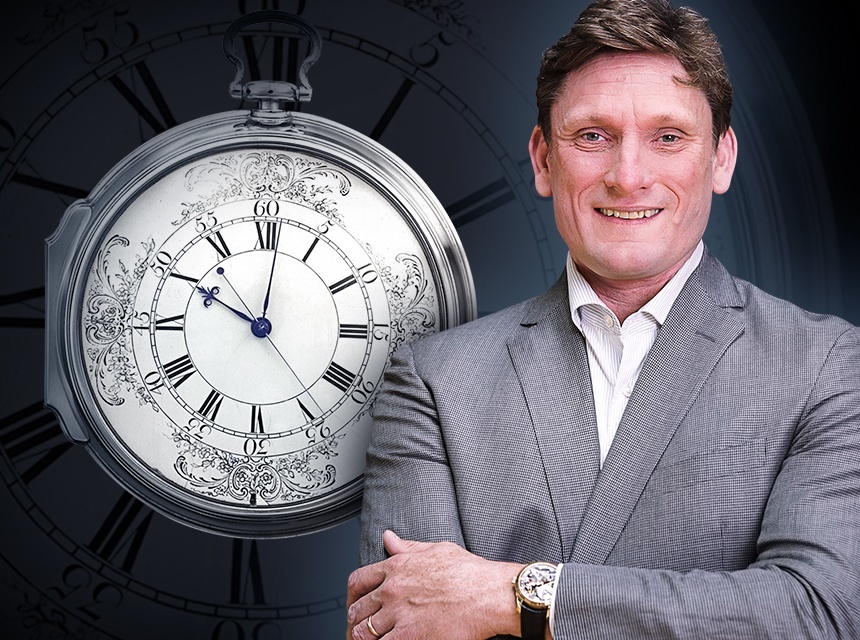 Welcome back to an original aBlogtoWatch feature, “My First Grail Watch.” In this series, we ask prominent people in the watch industry about the first timepiece that they lusted after. Today, we’re speaking with Stephen Forsey, co-founder of independent brand Greubel Forsey.

Advertising Message
Stephen Forsey: Born in St. Albans, England, I inherited my passion for the intricacies of mechanics from my father. From 1987, I specialized in antique watch restoration, which led to a position as head of Asprey’s prestigious watch restoration department, and then furthered my horological education at WOSTEP in Switzerland.

In 1992, I joined Robert Greubel’s team at Renaud & Papi, where I worked on the most complicated mechanical movements.  Then, in 1999, I chose to become independent. In 2001, together with Robert Greubel, I founded CompliTime SA, a company whose goal is to create and develop complicated mechanisms for major brands. In 2004, together with Robert, we then launched Greubel Forsey with our first invention, the Double Tourbillon 30°.

Stephen Forsey: My first grail watch was John Harrison’s H4 “Sea watch.” Personally signed by the celebrated watchmaker, it was a one-of-a-kind piece produced in 1759. It was also the world’s first portable precision timekeeper and winner of The Longitude Prize.

Stephen Forsey: The proof that a mechanical timekeeper was not only fine craftsmanship, but also a true precision timekeeper. Until Harrison’s H4 “Sea Watch,” nobody had realized that such precision could be achieved in a relatively small space (the H4 measures 13.2cm).

ABTW: I believe I know the answer already, but I have to ask – were you ever able to add the watch to your collection?

Stephen Forsey: Unfortunately not, as John Harrison’s H4 is a unique piece and preserved at the National Maritime Museum in Greenwich, UK.

ABTW: Given that, how has that First Grail informed the work that you’re doing now?

Stephen Forsey: The work of pioneers, such as John Harrison and others, has been, and continues to be, an inspiration to push Robert Greubel’s and my work ever further. This is why we created Greubel Forsey: to pursue mechanical timekeeping performance.

We made an important step towards our goal, winning in 2011 the International Chronometry Competition with a total of 915/1000 points with the Double Tourbillon 30° Technique. Time keeping precision and performance is one of our goals, and we believe and continuously work towards the highest precision possible with all our timepieces.

The Greubel Forsey GMT also follows the spirit of precision timekeeping, as it goes well beyond conventional time zone display using a window or a hand. Incorporating into our timepiece a terrestrial globe, completing one counter-clockwise rotation each 24 hours, it easily represents terrestrial time and longitudes. The globe of our GMT allows a realistic view across the continents, and we can imagine the Atlantic voyage – which John Harrison’s H4 made some 250 years ago – now on your wrist.