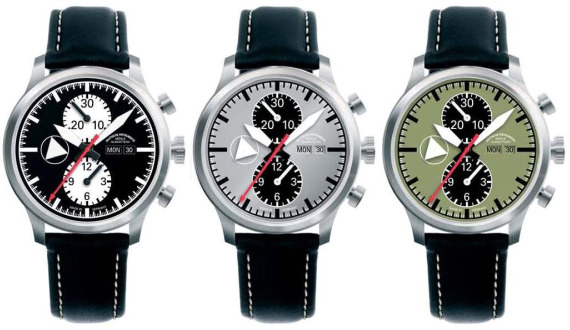 This collection of watches really surprised me. I’ve always like Muhle Glashutte watches (no I am not going to dig out the “u” with the two little dots over it, but you know it should be there), but not really like enough to discuss them in an excited manner. That is different with the Terranaut collection. Actually it is funny cause it is a decidedly “land” based watch for a maker of “nautical instruments.” I will forgive them for that. The Terranaut is segmented into three version, the I, II, and III. I and II are my top picks with III being OK, but not as nice. Each of the watches comes in a 44mm wide (40mm for the Terranaut III) sanitized steel case that is between about 10-13mm thick (depending on the version).

My top choice is the Terranaut I, which is the chronograph version with a Valjoux 7750 movement inside. The chronograph subdials are extra large and easy to read, which the subsidiary seconds dial being a cool looking rotating triangle. Neat huh? I think that Muhle Glashutte took some design hints from fellow German watch maker Sinn when designing the chronograph, but maybe it was all their idea. The watches each have a distinct aviator look to them, which again makes me confused why they are called “Terranaut,” but again I will forgive that as they are so nice looking. the Terranaut I watch comes with either a black, silver, or military olive green dial. Each with contrasting chronograph subdials. One thing that is a good touch is the matching day and date discs that match the color of the dial. I always appreciate seeing that. The three color dials with the red hands make for bold but unpretentious looks that are handsome and easy to appreciate it. Each has a timeless charm to it along with an ambiguous sense of utilitarian purpose that most guys will enjoy. Against the brushed steel case and black leather strap with contrast stitching you are looking at a uncharacteristically character-rich German watch. 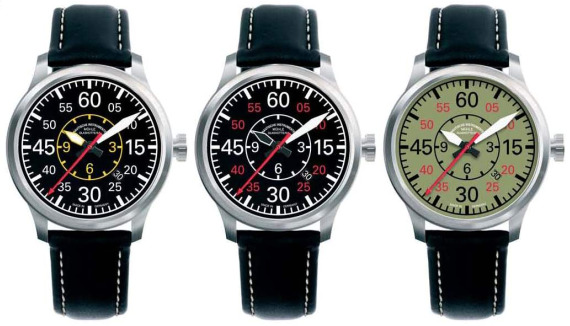 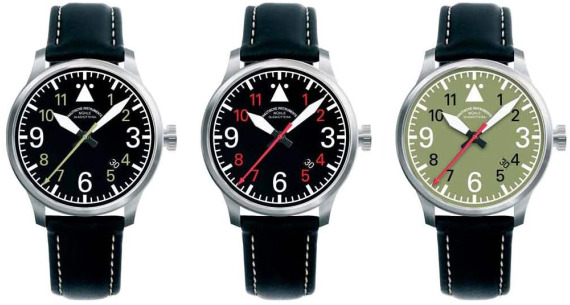 Then you have the Terranaut II and III watches. These are more simple three hand versions with automatic ETA 2824-2 movements inside. The different is the layout of the dial and the size. The Terranaut two has a special legible dial that really makes good use of the indicators for the “navigator” style look. The Terranaut II is a good 44mm wide, while the more traditional looking Terranaut III is just 40mm wide. With clearly styled aviator hands and dials these are good pilot watch homages with a good deal of style. The hour markers and hands are covered in a rich amount of SuperLumiNova for high function, and the crystals are all sapphire. The watches aren’t all that water resistant with just 50m of water resistance, but I excepted more from “Nautische Instrumente” Muhle Glashutte. Not a bit deal though. The watches each come in wooden presentation boxes. Not sure about the price, but I would guess about $3,000 – $5,000.