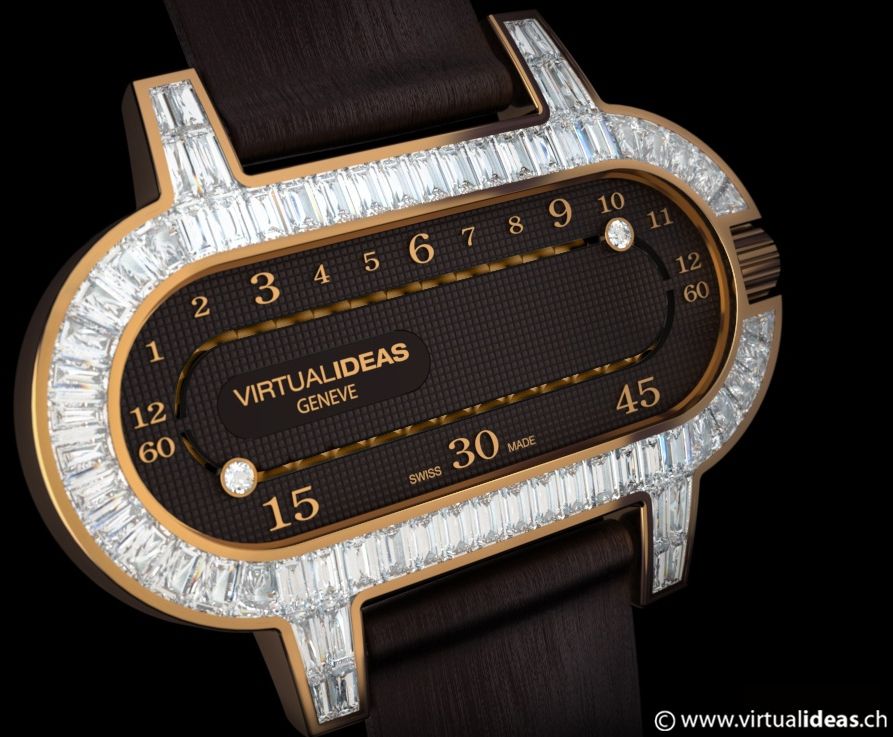 When you see an item you haven’t seen before your mind always experiences the same reaction. A complex measuring of mental association whereby you compare the item in your view with almost everything you’ve seen before. This is essentially the mental heuristic we use to determine what something is; a bridging of mental associations and experiences. So when we see something new, we can either identify it as having a relationship to something we have seen before, or ponder its style and function as a novel observation. 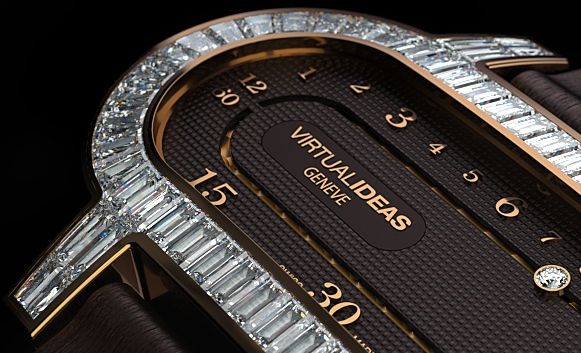 I know the Pink Panther from Virtual Ideas is a watch. I can tell from the way it is designed with a wrist strap and because it has numbers that a watch would have; It also helped knowing that it was designed by a watch designer. Despite knowing the Pink Panther is a watch, it is difficult to correctly place it in the amorphous watch taxonomy that exists in my head. The diamonds and rose gold case say luxury. The complex mechanical movement that would have been used to power the watch’s unique layout say technical achievement watch, and the face, with its soberly elegant numerals, say function. I then realized that this was not a design of individual components, but rather a fashionable design encompassing the entire structure of the watch itself; as much functional jewelry as it is art. In all, I didn’t know that it is a watch aimed for a woman until this was explained to me. The design was so different in execution that I actually had a totally fresh perspective on what it was. Now that I know its purpose, I see its potential. 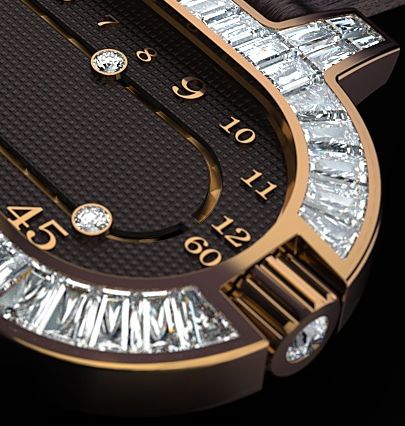 The Pink Panther is really a design that needs to be viewed on a woman’s wrist to be appreciated in my opinion. The elongated shape of the watch is almost vessel-like in nature, which visually extends the wrist it is worn on, an effect which is flattering. This is probably my favorite part of the watch, and looking straight at it, the body and lugs together create a shape almost creature-like and organic, thought still symmetrical. The textured face of the watch creates a depth which is inviting and mysterious. Two diamond studded orbs travel along the parallel paths indicating the time when read together. Reading the time on the Pink Panther is easy, but not precise. No matter, this is not the primary focus of the watch. It’s more like a timeless showpiece than an instrument of accuracy. You’ll find that most women’s watches of this caliber aren’t able to be read with much precision anyway. Despite this, the Pink Panther is much easier to read than most jewelry-esque women’s watches, and I like that as well about this watch. 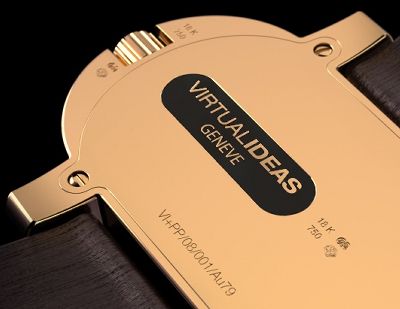 There is a lot of Bell & Ross influence in this watch, but it would be unfair to completely attribute Bell & Ross for the theme. No, the Pink Panther actually represents a modern approach of thinking about watch design; focusing on unorthodox case design and ways of displaying the time. I wouldn’t call it minimalistic, but there is certainly more emphasis on the watch case than on the portion of the watch that tells the time. Here in the Pink Panther, you have a perfect example of this philosophy in action. Despite regarding the Pink Panther as such, this is not an example of form over function, because function has certainly been addressed. A good designer like Virtual Ideas will never sacrifice the essential operation of a watch to satisfy looks. This is a primary way you can separate watch designers from mere industrial designers who sometimes conceive watches.

Overall, it is the entire design of the Pink Panther that really appeals to me. It is a new type of showpiece, and is deceptively feminine. Going back to my previous tangent on mental association, the Pink Panther (named as such due to the diamonds and the rose [pink] gold) does not come across immediately as a woman’s watch, but if you give it that role, it functions well in a unique and refreshing manner.