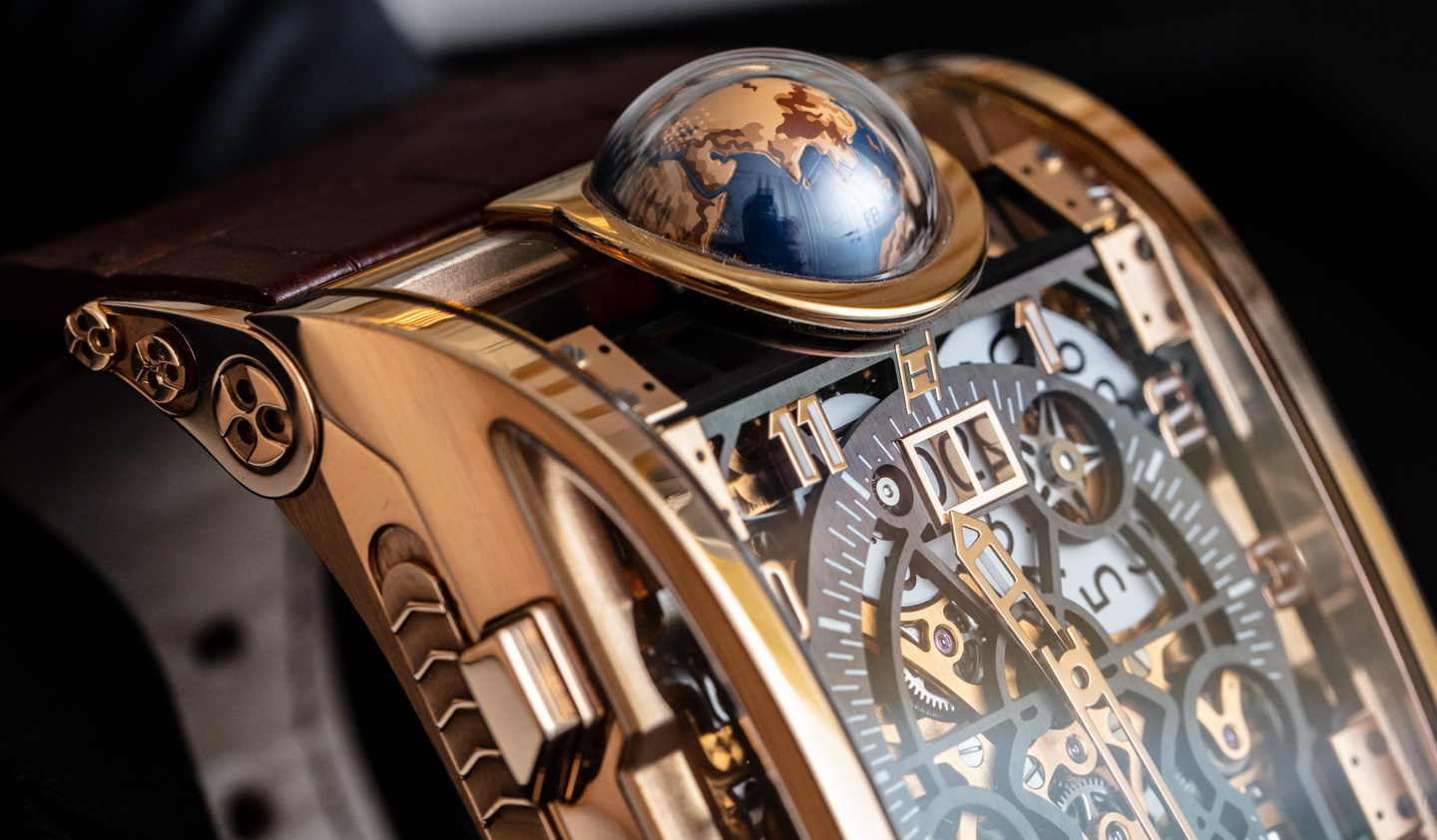 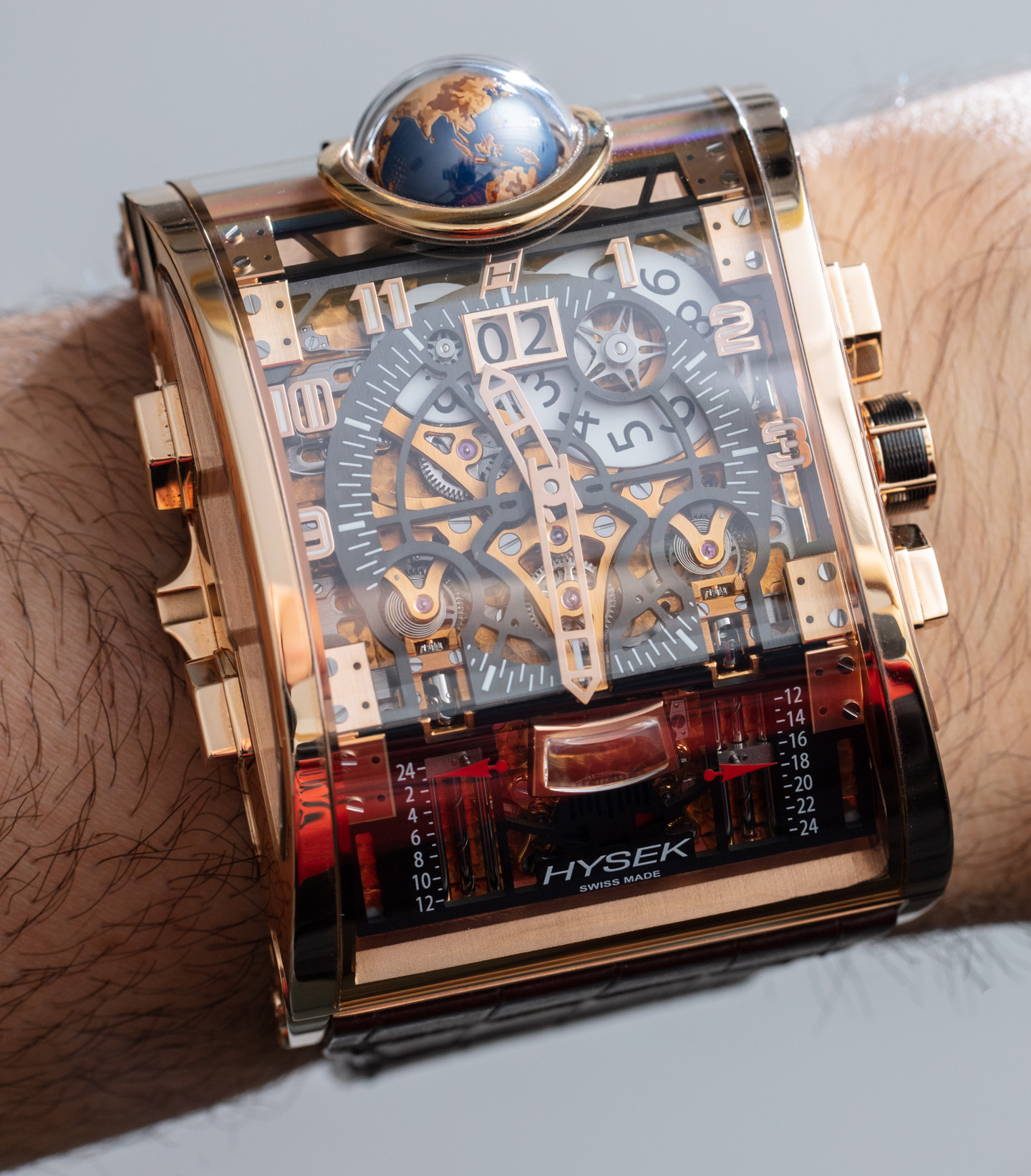 From time to time, I go back into my aBlogtoWatch photography archives and discover cool watches I never got around to writing about. This one is the original Hysek Colosso, which came out around 2008 and is a very rare timepiece. I was able to photograph it a few years ago when meeting with the Hysek brand in Switzerland. This is actually one of two Colosso models that the Hysek brand released, which also includes the later (and more expensive) Hysek Colosso Grande Complication perpetual calendar watch. Like a tiny (relatively speaking) spaceship for the wrist that was inspired by the shape of an insect grub, this type of watch really epitomized the apex of what niche watch brands were up to prior to the 2009 financial crisis.

Hysek worked with famed watch movement maker and designer Christophe Claret for the Colosso GMT Minute Repeater. You can see his handy work all over, including the base minute repeater movement, which has been stacked onto the complex time display system. That’s really the best way of thinking about the architecture of this movement — on the bottom is the mainspring, regulation system, gear train, and minute repeater (being a more or less independent mechanism), and on top of it is a complex system that uses its power to indicate multiple time zones, as well as a big date indicator. 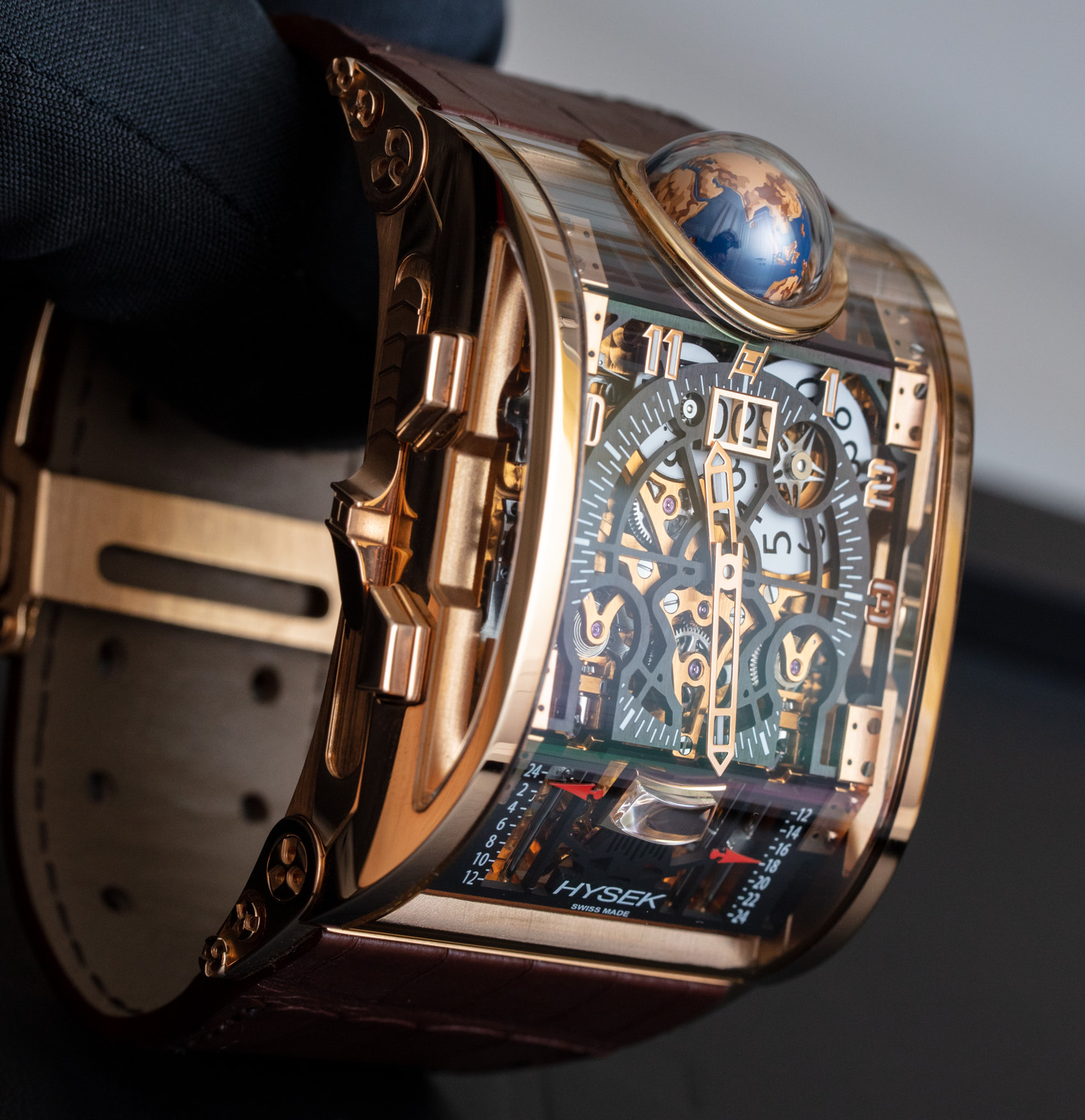 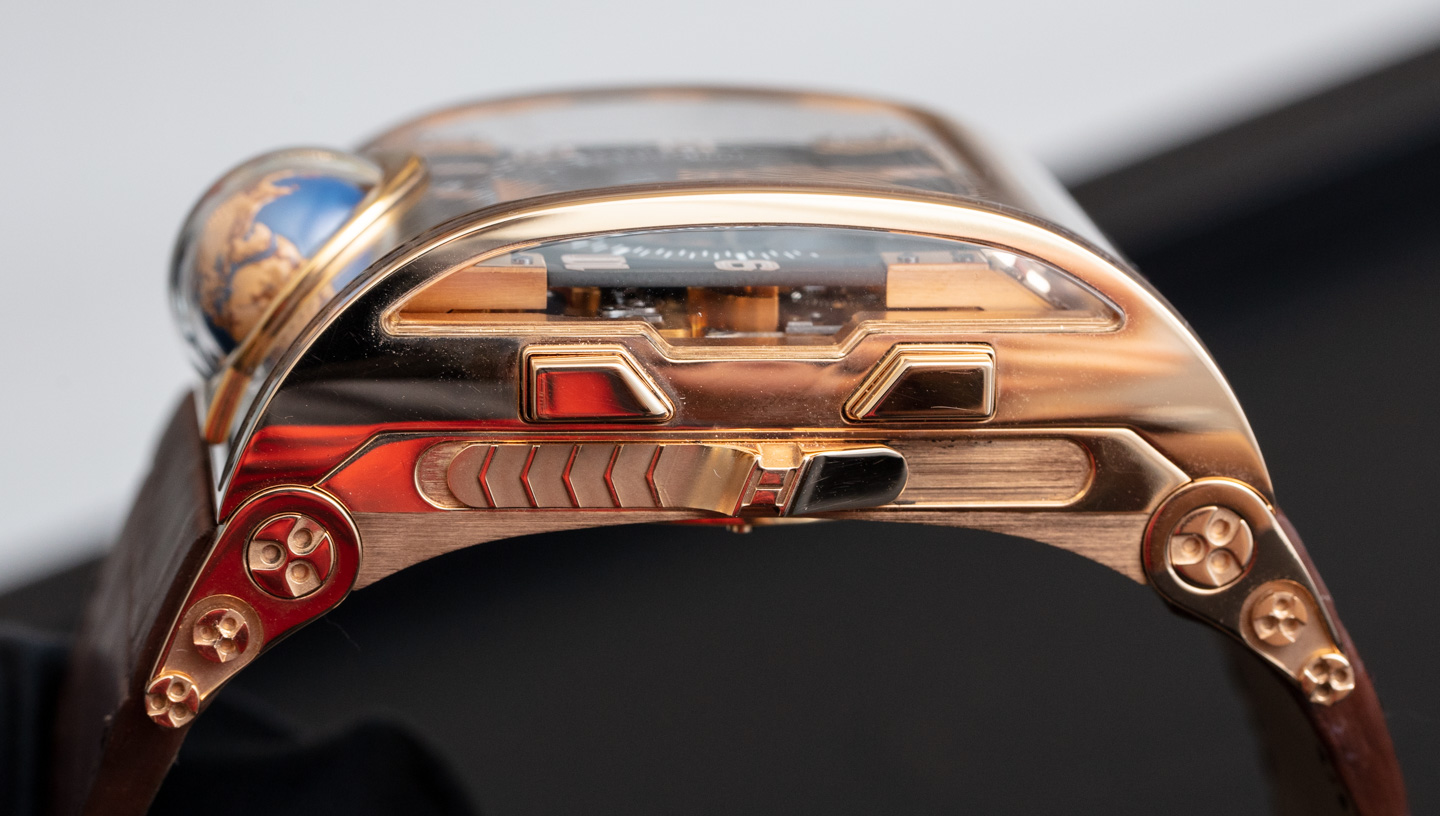 The dial displays a few interesting things. Starting with the main dial (which is entirely skeletonized), you see a traditional 12-hour dial with a big date indicator window at the 12 o’clock position. Above it through a sapphire crystal dome, jetting out through the sapphire crystal case, is a half-sphere representation of the earth. The idea is that it spins in coordination with the time so that you can get the illusion of seeing the earth make a full rotation every 24 hours.

The power part of the watch face includes two retrograde linear 24-hour indicators, as well as a city selection window for the local time. The idea is that you can see the main time in 12- and 24-hour format, I believe, and then the second time zone is in 24-hour format. The case has a series of pushers on it, the purpose of which I don’t entirely recall, though I believe the pushers allow for going forward or backward for setting the local time. Another pusher is likely to be for adjusting the date. You’ll also notice a sliding lever that is there to activate the cathedral-style minute repeater mechanism, another Christophe Claret specialty. I’ll bet with the large footprint of the watch, the minute repeater sound wasn’t too bad. The movement is manually wound and operates at 3Hz with 48 hours of power reserve. 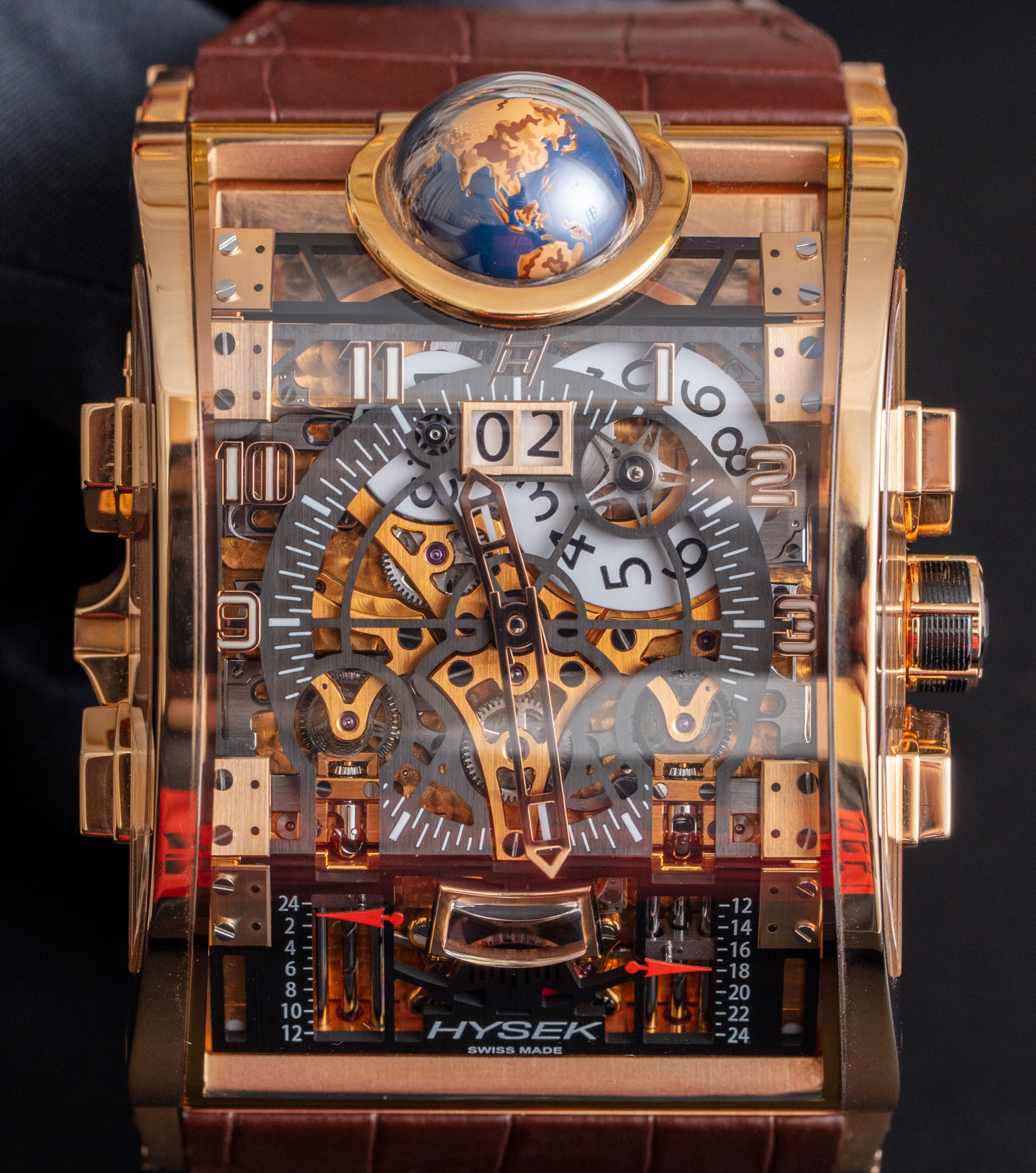 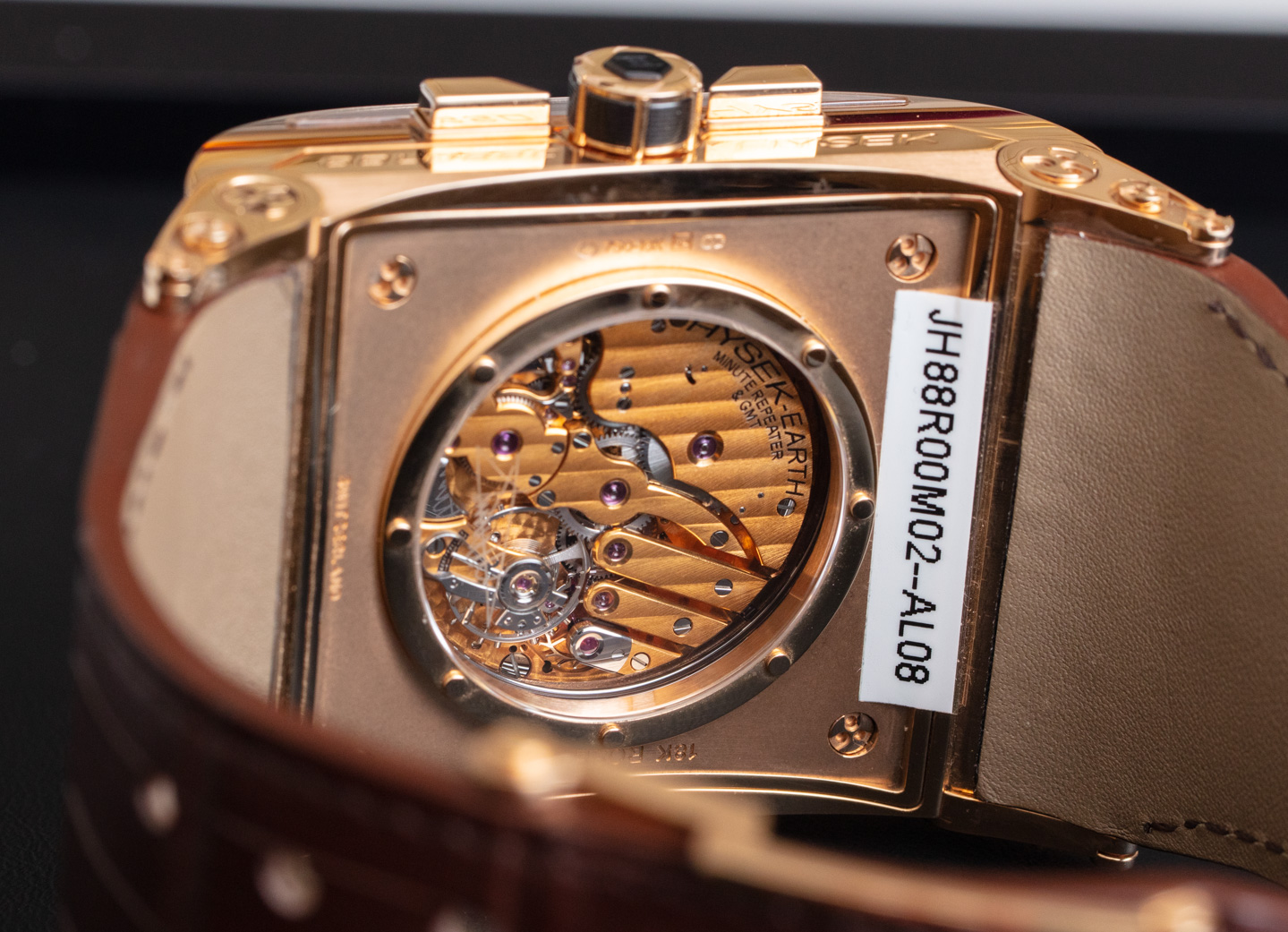 Heaven knows how accurate the watch is, but the mechanical engineering required to make all of this work is, indeed, impressive. I love looking at the movement from various angles to see how this interesting watch movement and case combination was put together. But is it comfortable to wear on the wrist? Well, that really depends on what you are doing with it. Around this era, Christophe Claret was designing a lot of mega-sized watches such as the Chapter 1 and 2 watches of Maitres du Temp, among many others. Over time, I think he and his collaborators found interesting ways of making super-sized watch cases wearable. In the case of the Colosso, you can see that the caseback is rather curved to wrap around your wrist, and the Hysek-style lugs articulate to help it wrap around your wrist better. Worn snugly, this watch isn’t uncomfortable, but its large size makes it unwieldy. The Hysek watches website no longer has details about this watch, so, unfortunately, I don’t have specific measurements for you. That said, most people should get a good idea of what this watch wears like by seeing it on my wrist. As a watch that was never really pretty to begin with (though appealing for its technique and originality), it has aged into being a wonderfully curious relic of a not-so-distant era that nevertheless feels far away given how much global attitudes and moods have shifted since then. 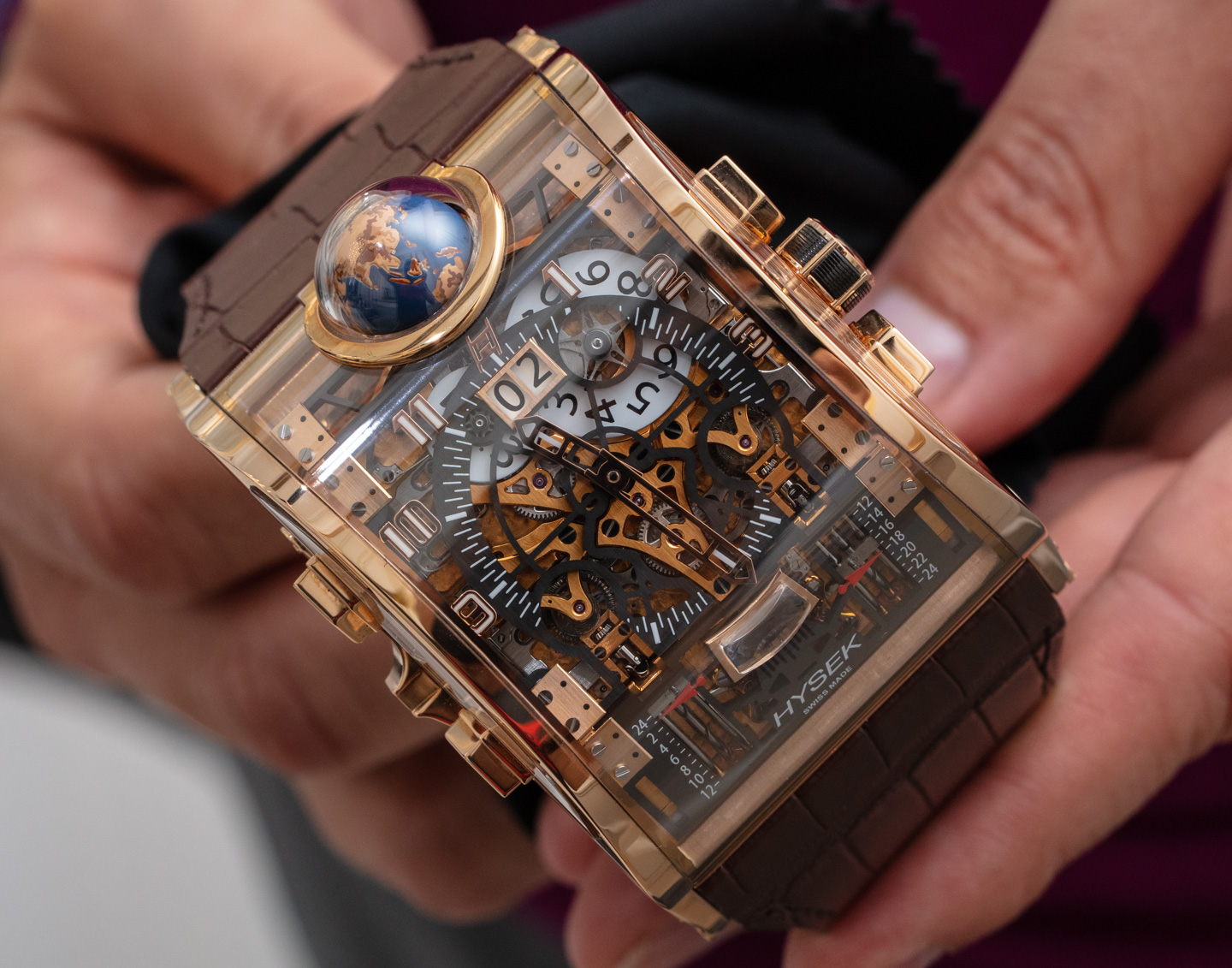 Hysek produced a small assortment of Colosso GMT Minute Repeater watches in both 18k rose gold and 18k white gold. Fourteen years after their original debut, these should prove to be exceedingly rare in a retail or event collector’s context, but I certainly love this weird stuff. Don’t forget the original cost and consider what a watch like this would be priced at today considering current rates of inflation. When the Hysek Colosso GMT Minute Repeater watch was launched, the retail price was $550,000 USD. Hysek watch website here.