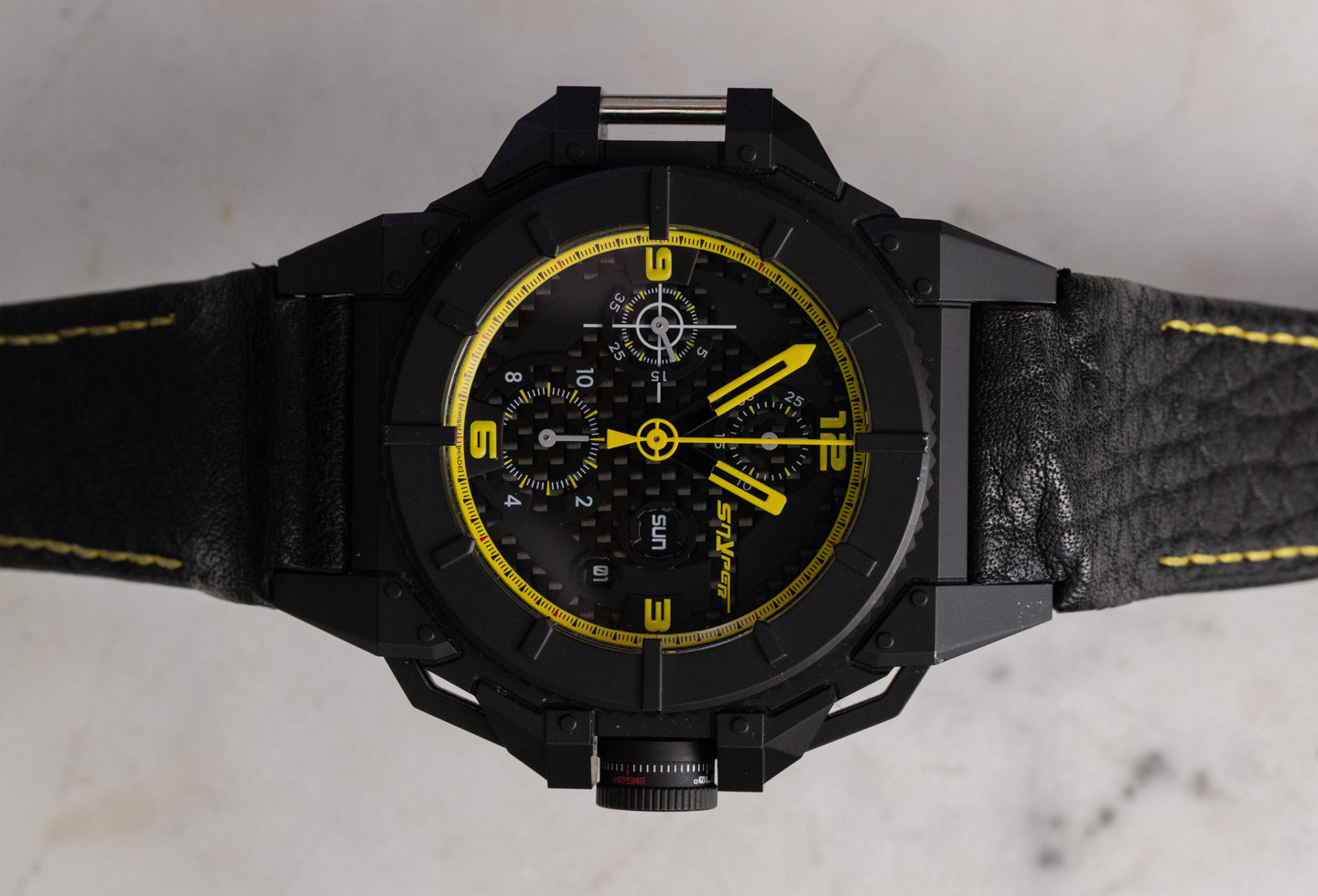 No Longer Made: Snyper One Chronograph Watch 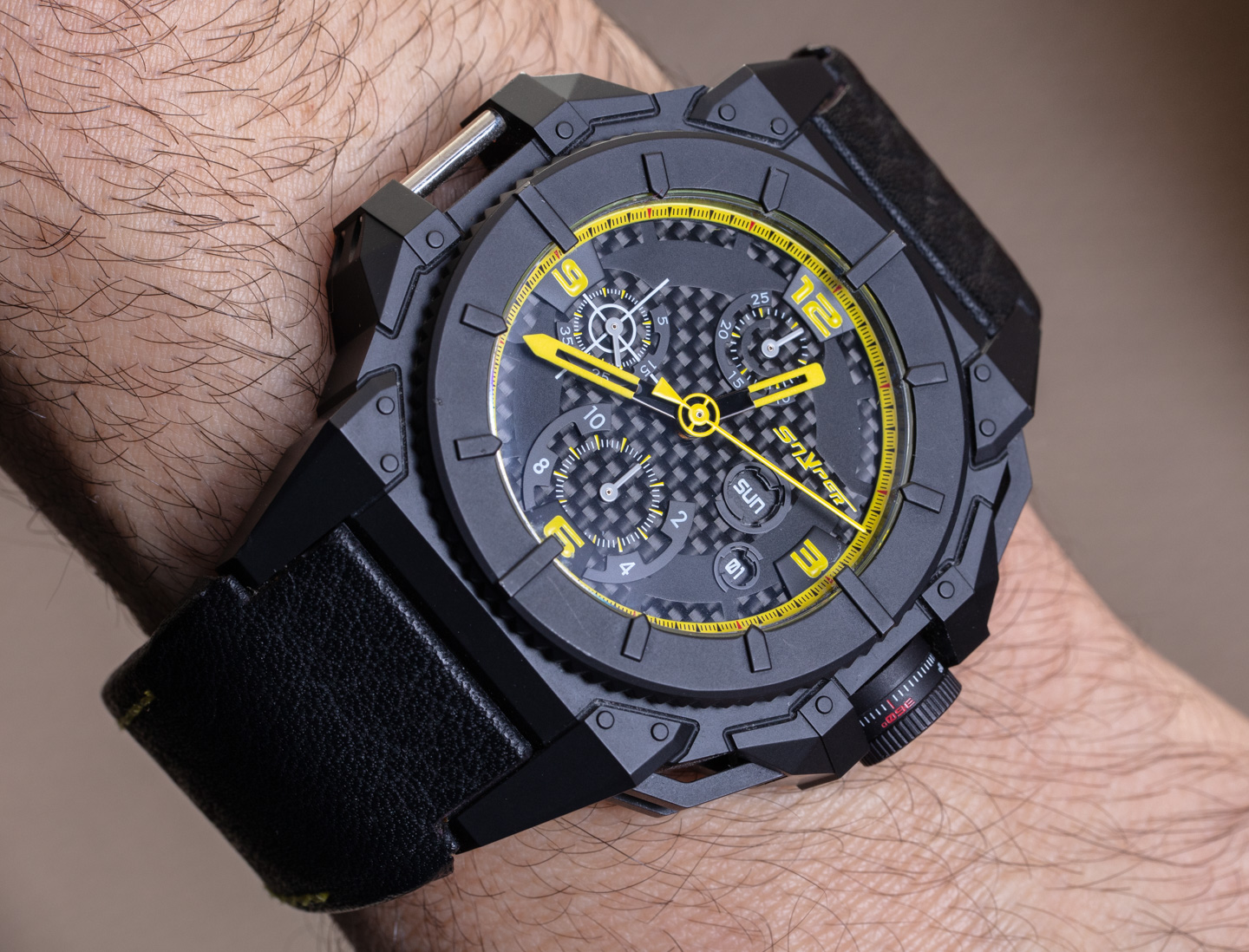 In 2010, I first covered the Snyper watch brand (see aBlogtoWatch coverage here). At the time, I discussed the new sports watch brand from Jean-Francois Ruchonnet, who was well-known for being the designer and “creator” (though Guy Semon was the man who got it to work) of the TAG Heuer Monaco V4. Ruchonnet was a bit of a wild character and, in part of his life, he was a sniper in the French military. His career later took him into design, which is what eventually led him to work on timepieces. Snyper was supposed to be his lifestyle brand that combined his machismo aesthetic style and the era’s growing appetite for fun,  high-end sports watches. Snyper’s debut product was the Snyper One, and it came in a truly dizzying array of styles at loads of price points (yes, there were precious stone-decorated models), many of which can be seen in my debut hands-on article above.

In addition to being visually inspired by a modern military sniper rifle, the Snyper One watch and brand was a sort of allegory for adult male life, at least some people’s idealized versions of it. Rifle sniping was meant to serve as a metaphor for a more honed style of “attack” on life’s problems. There are people who study situations, wait patiently, and then try to act only at the right moment. If that sounds like you, then Mr. Ruchonnet might suggest that you, too, are a Snyper kinda person. 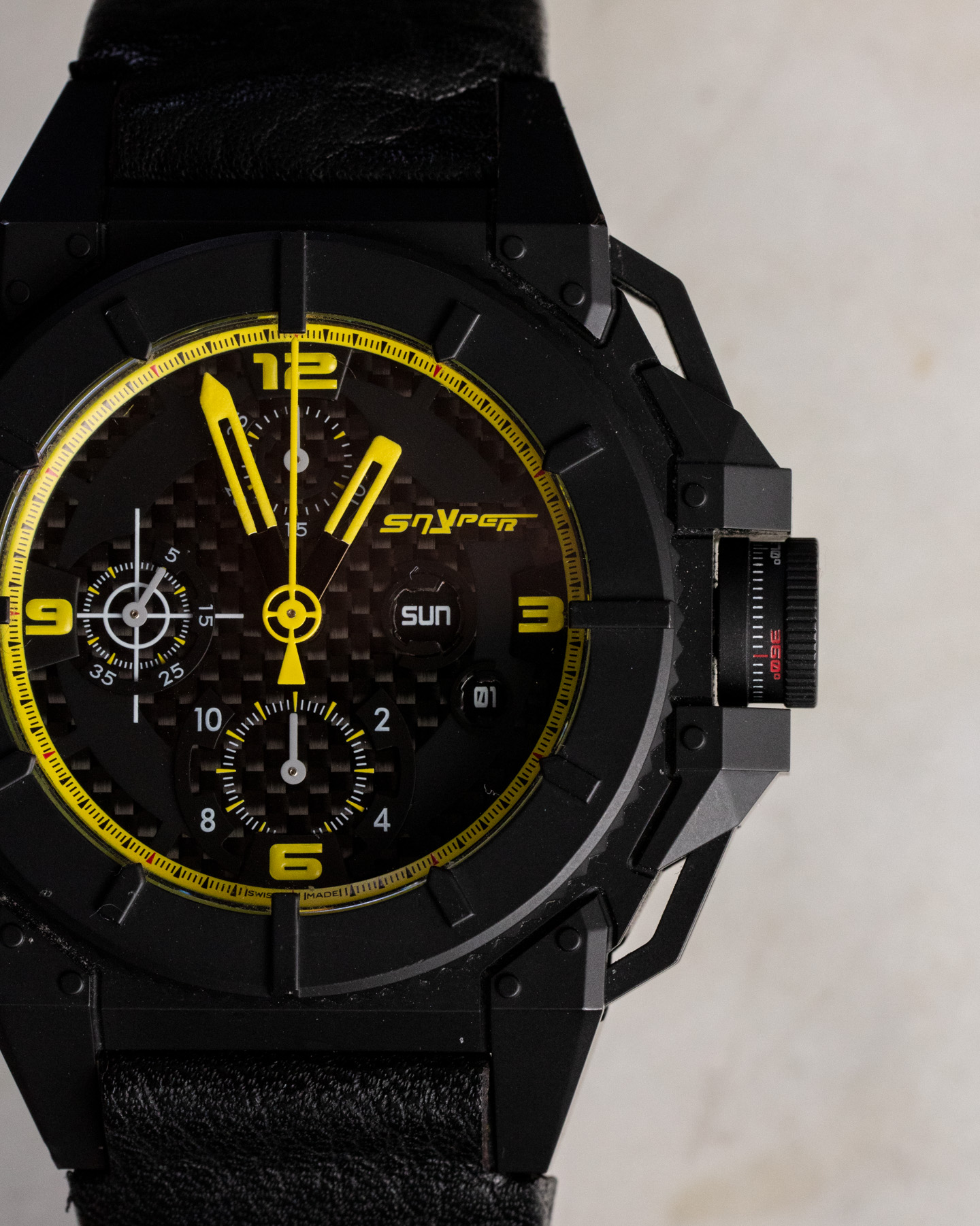 Visually, the Snyper One watch is very much like an Audemars Piguet Royal Oak Offshore from another (less expensive but still pricey) mother, with the core visual elements being things you’d find on a sniper rifle and its accessory parts. My favorite detail is the crown, which is meant to look like one of the adjusting knobs on the scope. The bold, fun, legible, tactical style of the Snyper One has aged a bit, but it still makes for a cool-looking design that has merit today.

The most novel part of the Snyper One’s PVD-coated black steel case is the left flank, which has two polished steel bars. These make an attachment point for an accessory to attach to the case, similar to how a gun or rifle might have an accessory attachment point. Allow me to get into that for a moment. The second time that I met with the Snyper brand after my initial 2010 meeting was six years later, in 2016. I then produced an aBlogtoWatch watch review of the Snyper One watch here (same core piece as the black and yellow reference 10.260.00 I look at in this article, but with a different case and dial finishing). At the time I was able to loan some of the attachments that were available for the One, which included a laser pointer/light and a butane lighter (so check out that article for pictures). Snyper had more attachments in mind to develop including a telemeter (for people sniping play)… and probably some type of substance container (for other types of play). 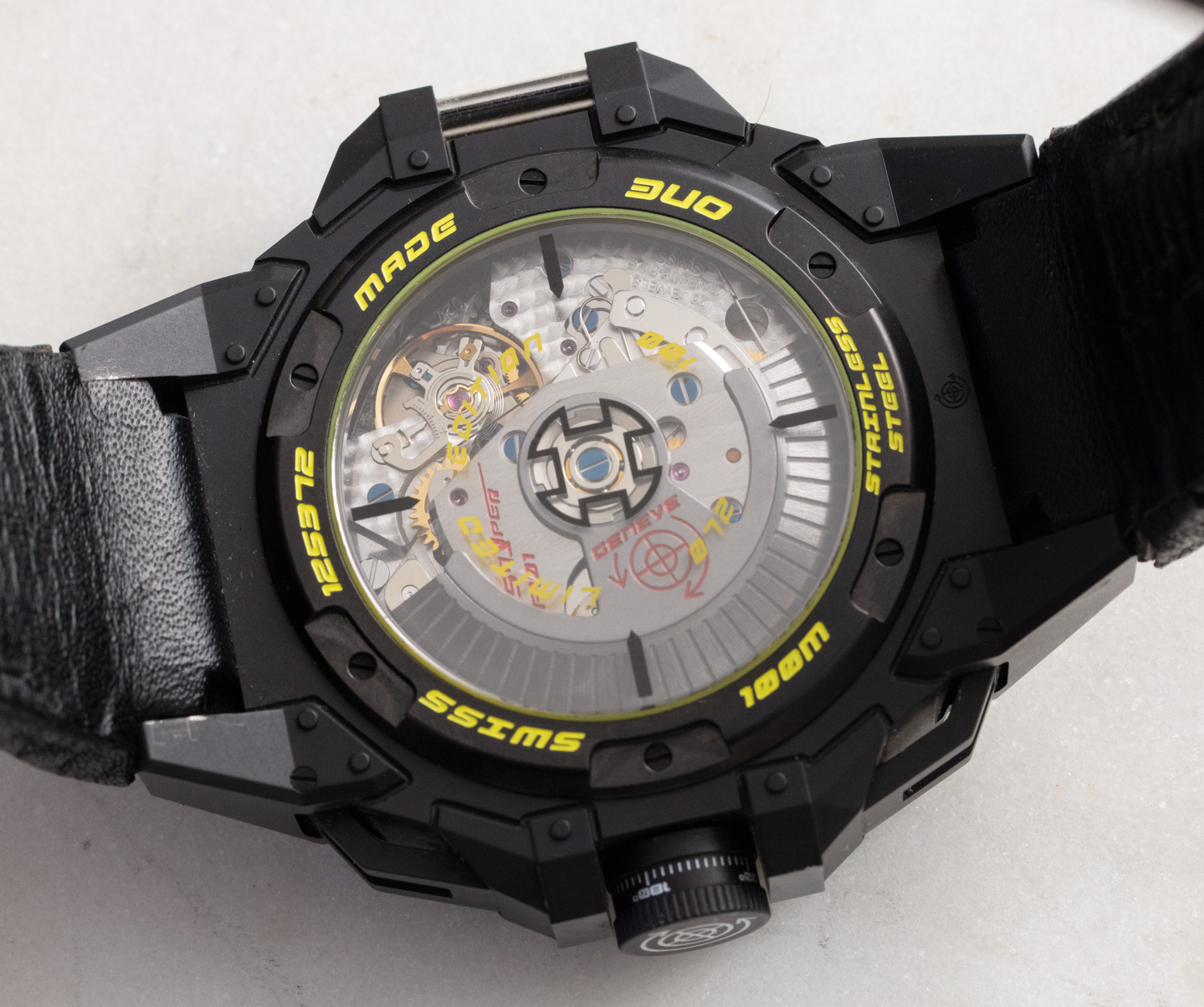 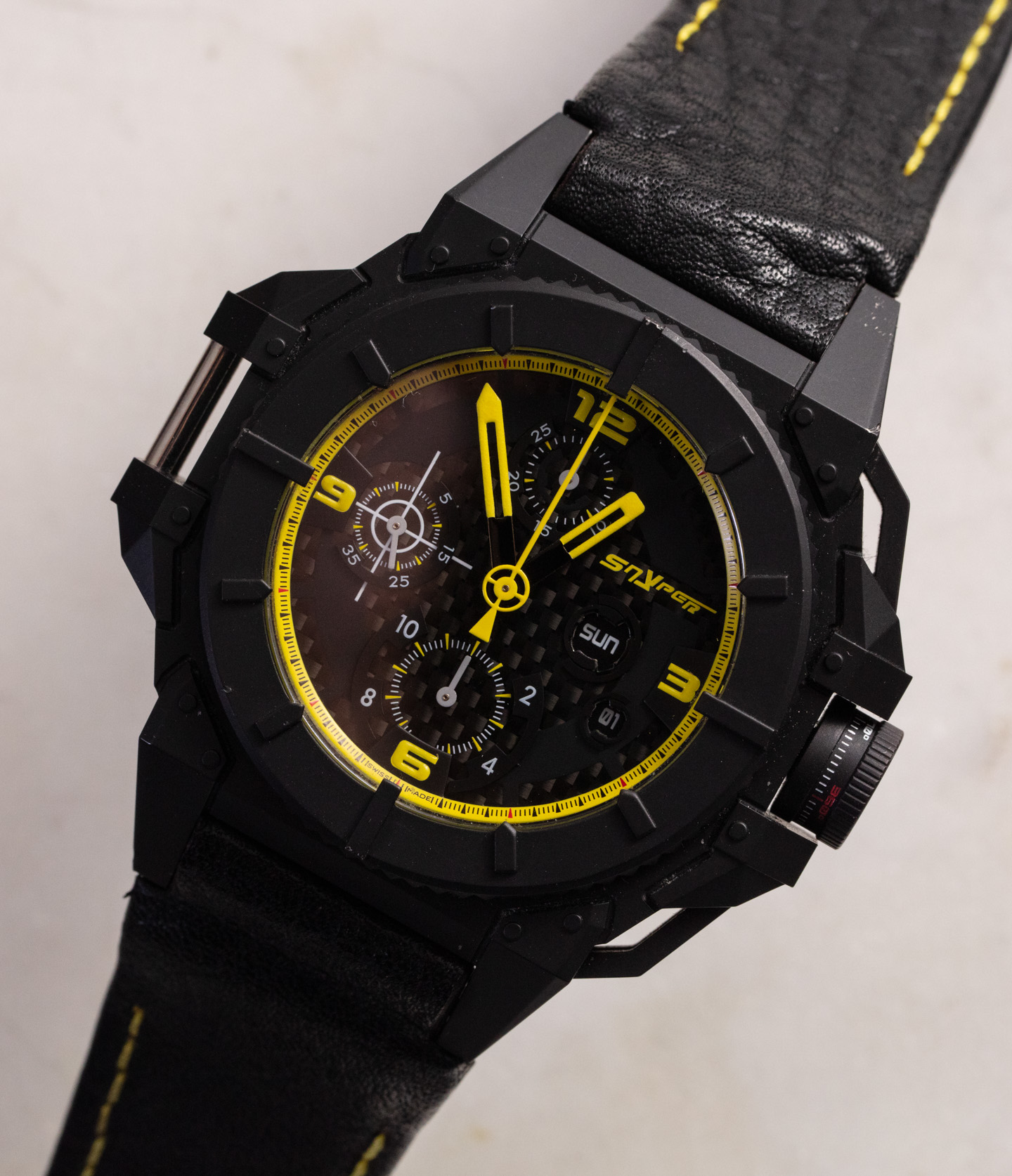 Now in 2021, as I write this aBlogtoWatch No Longer Made article, the Snyper watch brand appears to be defunct. Maybe it will come back, probably it won’t. I think a big reason for that is because watch brands today are very personality-driven, and I don’t believe Jean-Francois Ruchonnet has been involved in the watch industry for at least several years. That said, there are still Snyper watches out there, so collecting these rare modern sports watches can be a bit of a thrill.

The watch case itself is heavy and strong-feeling. It’s built a bit like a wristwatch tank (and even looks that way). I really love all the over-engineered design, from the complex case shape and pushers to the elaborate graphics on the caseback and dial. The case is about 43mm-wide without the flank and crown, and with them, the watch case is about 53mm-wide. The case is also about 14mm-thick and has a lug-to-lug distance of about 58mm. That means this watch wears large, which I like. But I would also have preferred one more inside strap hole so that the watch could fit on my slightly under seven-inch circumference wrist. 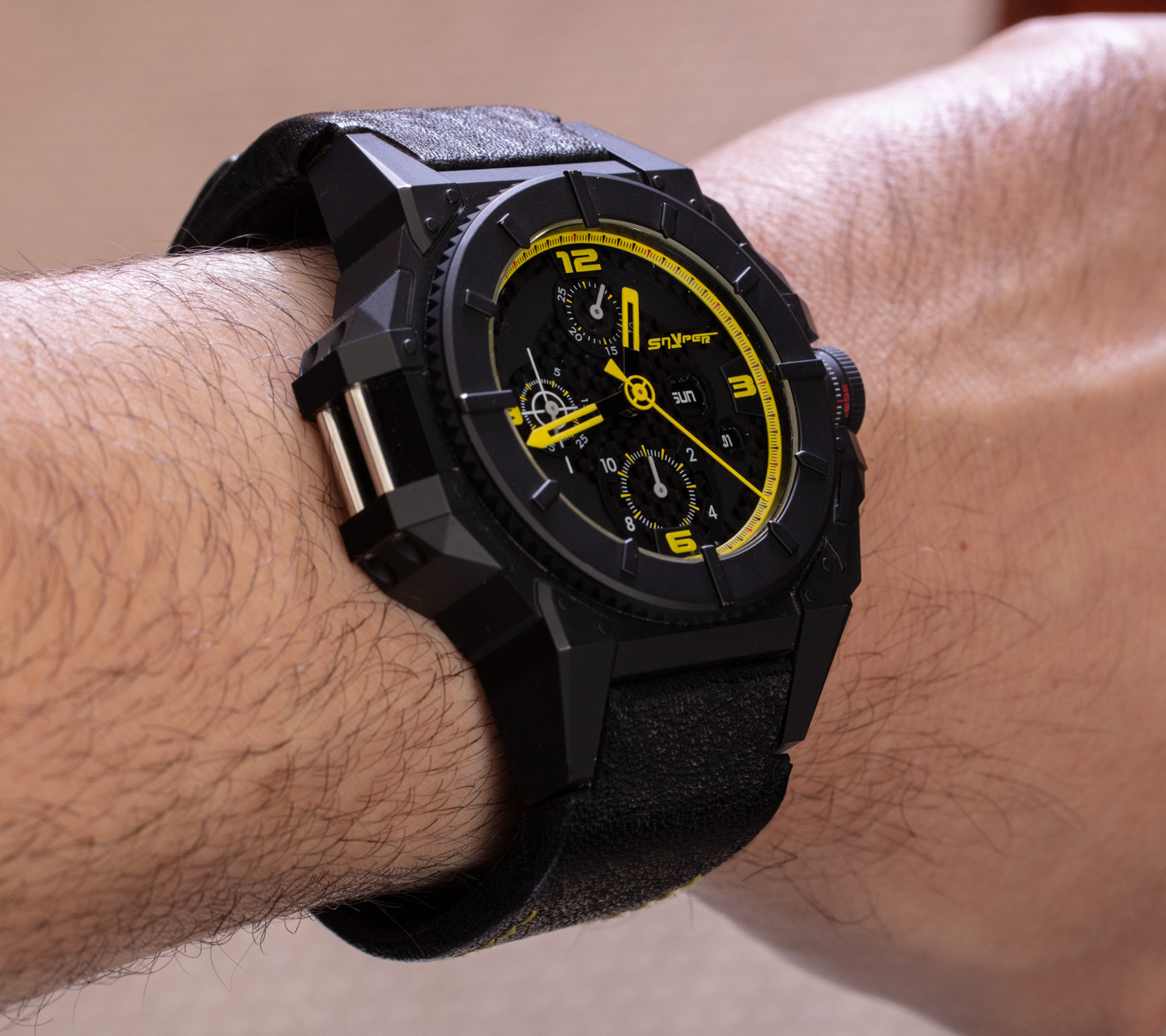 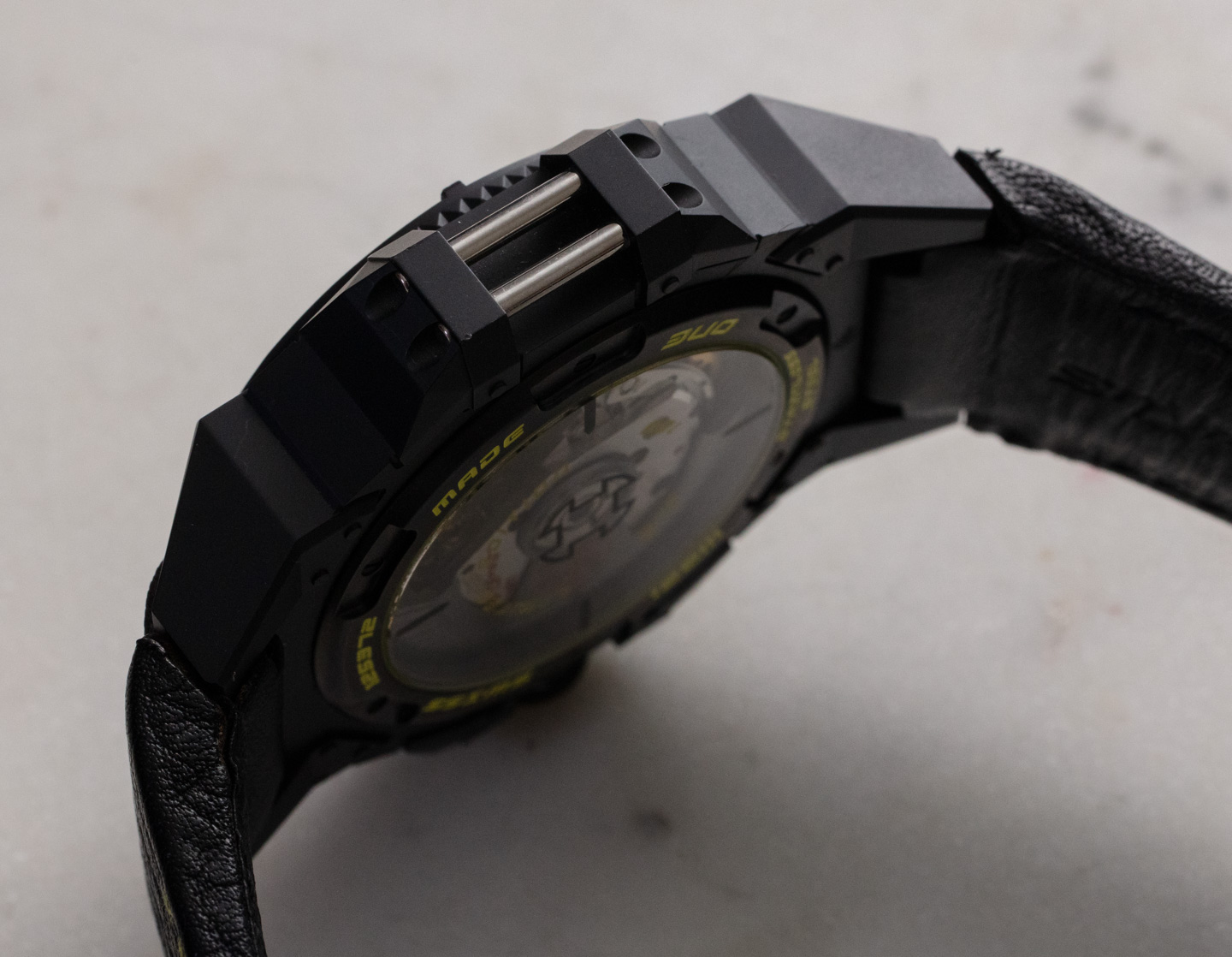 The Snyper One case is water-resistant to 100 meters and has an AR-coated sapphire crystal over the dial and caseback. Don’t miss the period-trendy carbon fiber dial. Speaking of the dial, I’ve always liked the staggered look of the day and date indicator windows that seem like an actual refinement. I also like the strong legibility of the dial with the artistic backdrop of what looks like a closeup section of a Japanese Gundam robot character.

Inside the Snyper One watch is what the brand called its caliber F101 movement, which was essentially a Swiss Made ETA Valjoux 7750 automatic chronograph movement that I believe was decorated by watch movement maker Concepto. Movement presentation is great, actually. The 7750 has a nicely perlage-polished surface, blued steel screws, and a custom automatic rotor that moves very smoothly and is probably mounted on ceramic ball bearings. What’s cool (and rare) is that the Snyper brand logo and “F101” label are engraved and colored into the movement itself. This is about as nice a 4Hz, 48-hour power reserve 7750 movement you could hope for (without it fundamentally becoming a different movement). So, the movement is pretty nicely done. 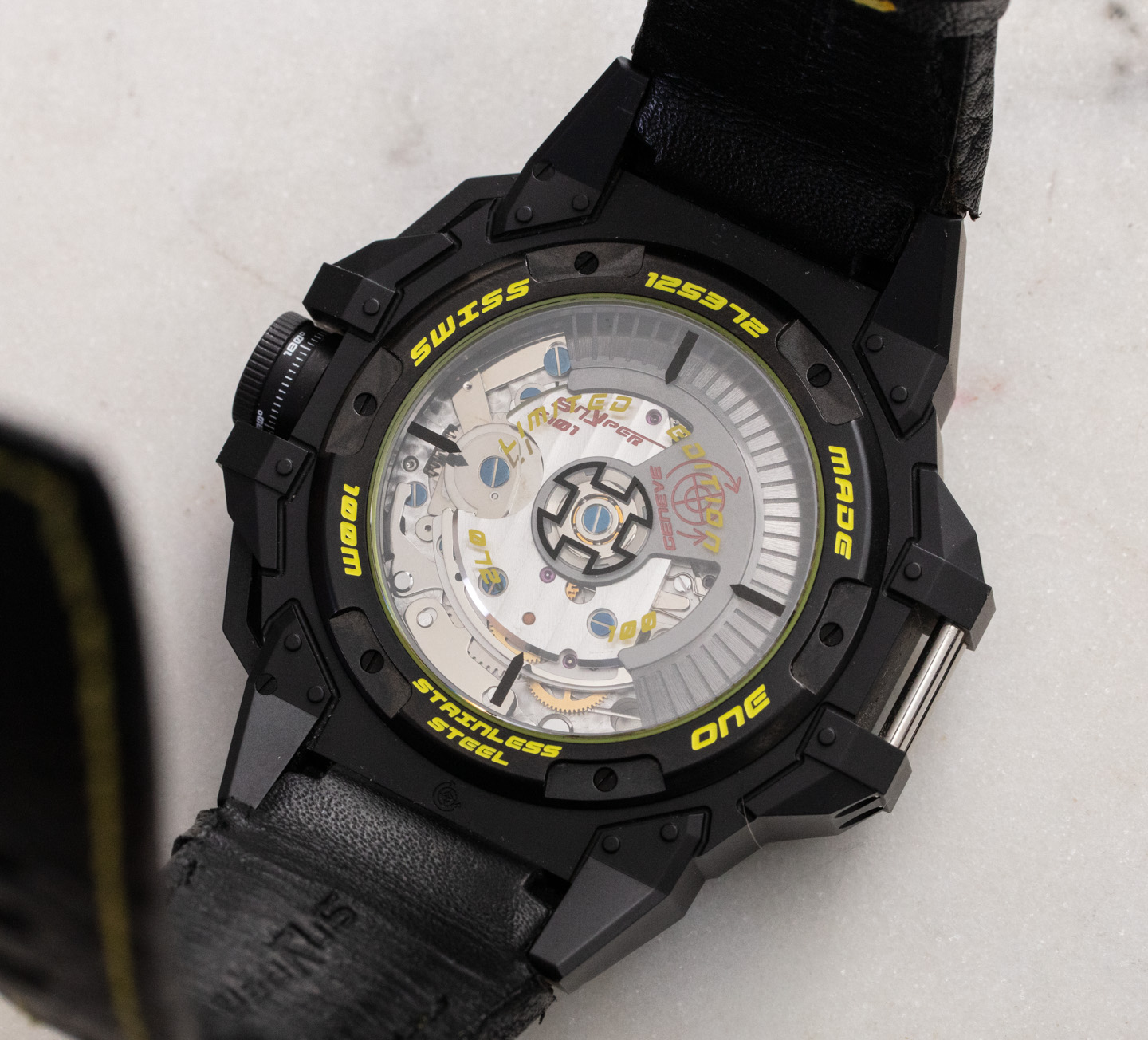 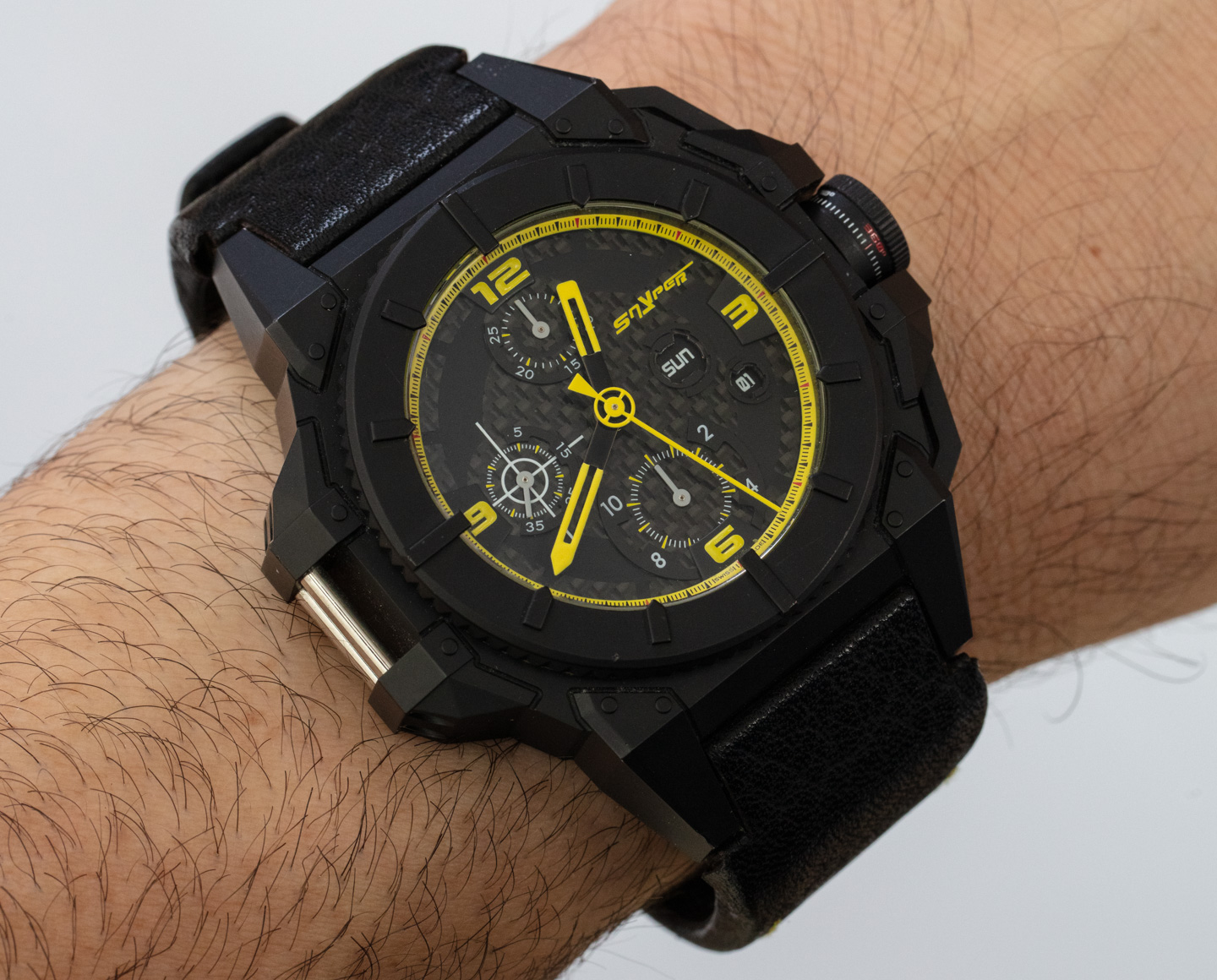 Snyper watches tend to have a lot of what you want to see in a high-end watch, including things such as a lot of custom parts and high-quality materials. The brand clearly did not find enough success in the marketplace between two owners, but I don’t think the products are to blame. Often, cool watches miss out because of marketing deficiencies, changes in consumer trends, and relationships that brands have with retailers and other distribution points. If Snyper came out again today, it would find a challenging marketplace because its price point was too high, even though I do think there are consumers out there for something like this at a lower price point. Personally, I have had some good experiences with the Synper One watch and feel that in a lot of ways, it stands the test of time. It is a very polarizing watch with legitimate opinions on both sides of the table, but it is hard to deny that it is fun and distinctive. This particular reference 10.260.00 Snyper One watch was a limited edition of 100 pieces and had an original retail price of $8,200 USD.