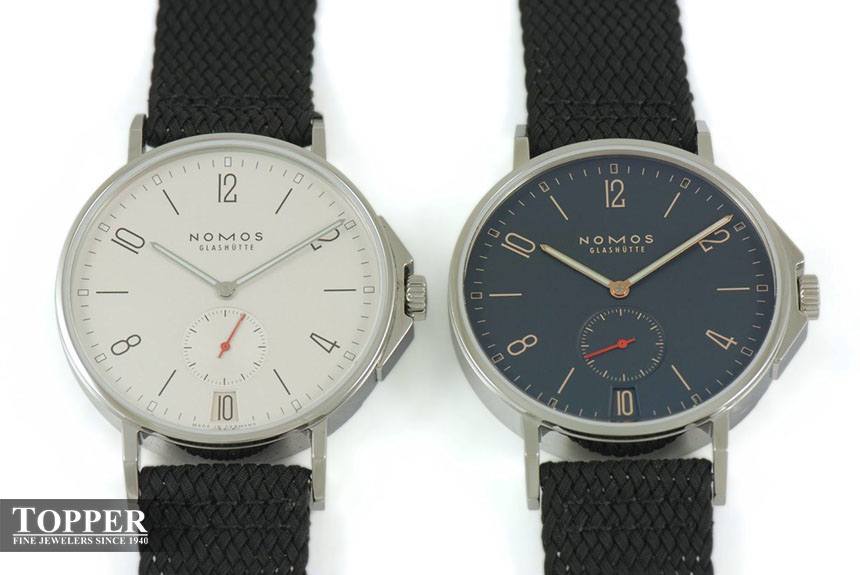 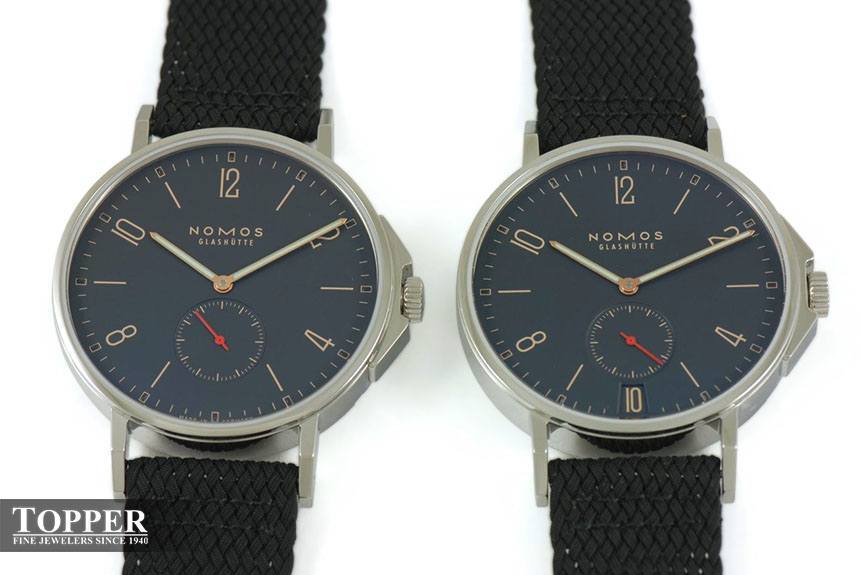 One of our first posts on the Topper Jewelers blog about Nomos Glashütte was about their Metro watch model.  One of the reasons that I liked writing about this piece, was that in describing how its design deviated from other Nomos watches, I felt that it helped me understand the core Nomos aesthetic. I feel similarly when I look at their “dive watches,” the Ahoi collection. While the Nomos Ahoi have sporty features not found on their more traditional formal pieces, they integrate many of the traditional Nomos design aspects.

Before I get into the watch itself, the Ahoi series provides an opportunity to talk about Nomos’ naming conventions which are a little different than most of the brands that we sell. Nomos uses names similarly to when when a singer puts out an album which has the same name as one of the singles. Ahoi both refers to the series as a whole and also to the silver-gray colored non-date model ($4,060).  Atlantik refers to watches that feature the dark blue/black gray color, and Datum ($4.660) refers to those models that have a date. For instance, the Ahoi Atlantik Datum is the model that features both the dark blue dial and the date. Both of the Atlantik models are 2014 novelties, while the silver-gray dials came out in 2013.

The Ahoi Datum (left), and the Ahoi Atlantik Datum (right)

While the 40mm case is smaller than almost all of our dive watches, the Nomos Ahoi wears like a much larger timepiece. Since the case is very thin, the watches diameter is made up almost entirely of the dial. In fact, the dial is around the same size as some of our bezeled watches that are in the 43-45mm size. This makes the watch a nice alternative for someone who wants a large watch, but doesn’t have the wrist size to pull off a larger piece.

While the case is thinner than most (all?) of our dive watches from other brands, it is significantly thicker than most Nomos watches. Tangente models, which are the longest standing watches in the Nomos Glashütte collection, are around 6.5mm thick. Tangomat models, which feature identical dials and lugs to the Tangente but feature an automatic rotor are around 8mm thick. The Nomos Ahoi models feature an even greater jump in thickness over the the Tangomat and are 10.6mm thick. 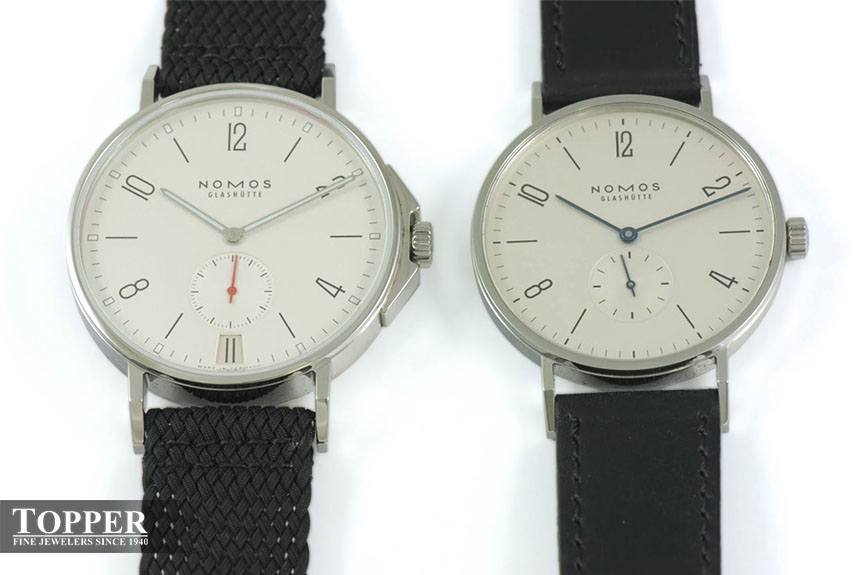 The Nomos Ahoi Datum (left) shown next to the thinner Tangente 38mm. 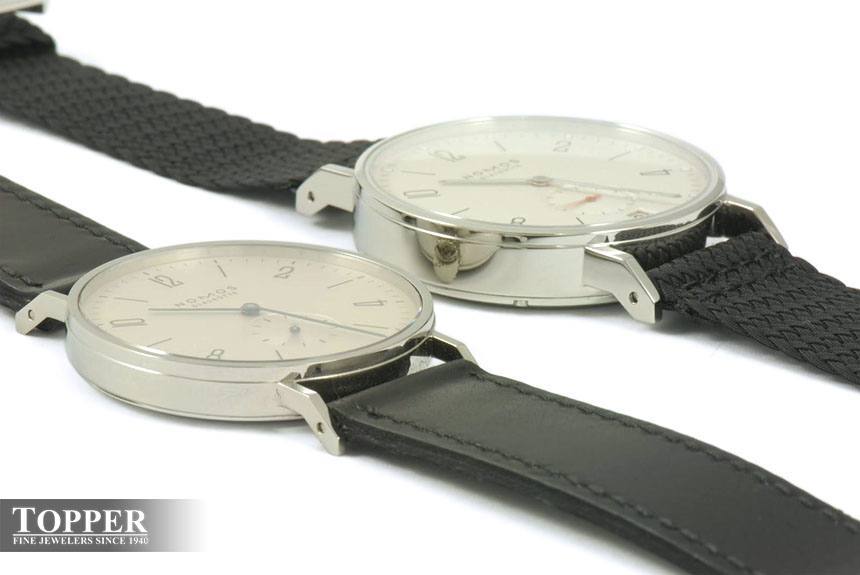 Another view of the Tangente 38 (left) and the Nomos Ahoi Datum (right). The Nomos Ahoi model is approximately 4mm thicker.

The Nomos Ahoi certainly has a lot in common with the Tangente and Tangomat series. Both watches feature identically shaded silver-gray dials with hour markers that alternate between stick markers and even Arabic numbers. Though the Nomos Ahoi models feature slightly thicker minute and hour hands to accommodate the lume strips, the lengths of the hands are proportionally identical. While thicker, the Ahoi case shape and bezel seem incredibly similar if not outright identical to the Tangente. In addition, the Nomos Ahoi sports considerably thicker lugs to match the increased depth of its case. While it is colored a sporty red, the second hand is also an identical shape to those found on the Tangentes and Tangomats, though the Nomos Ahoi features 1-second markers in addition to their 5-second markers. Still, there is no mistaking that the Ahoi is a Nomos.

The Nomos Ahoi models also feature sporty elements not found on models such as the Tangente and the Tangomat. As the watch is water resistant to 200m, it features crown guards and a screw-down crown. Instead of featuring blued hands, the Nomos Ahoi models feature lumed hour and minute hands, as well as lume squares outside of each hour marker. As to these markers, there is a difference between the silver gray dials and the Atlantik models. The Atlantik models feature a darker superluminova that better blends with the aesthetics of the dial. As would be expected, it isn’t quite as vibrant as the light colored lume. 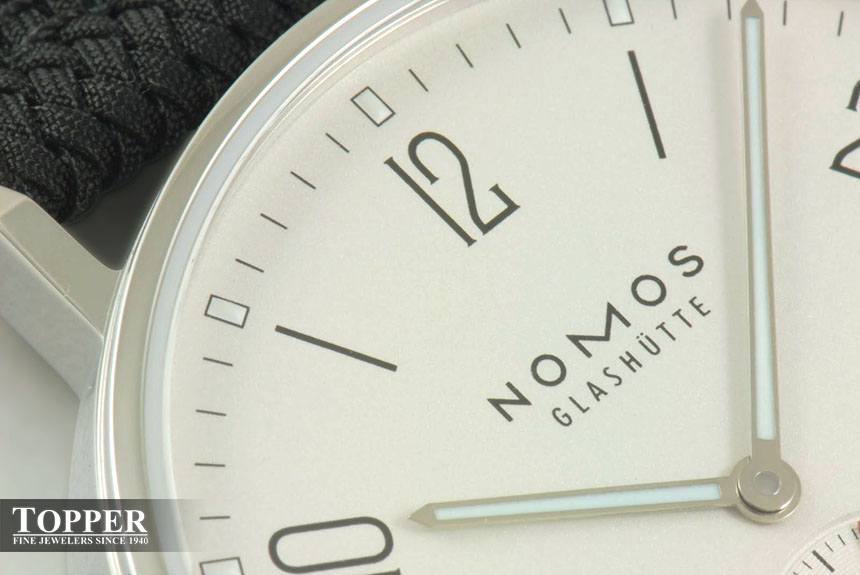 The brighter lume hour markers on the Ahoi silver Dial. 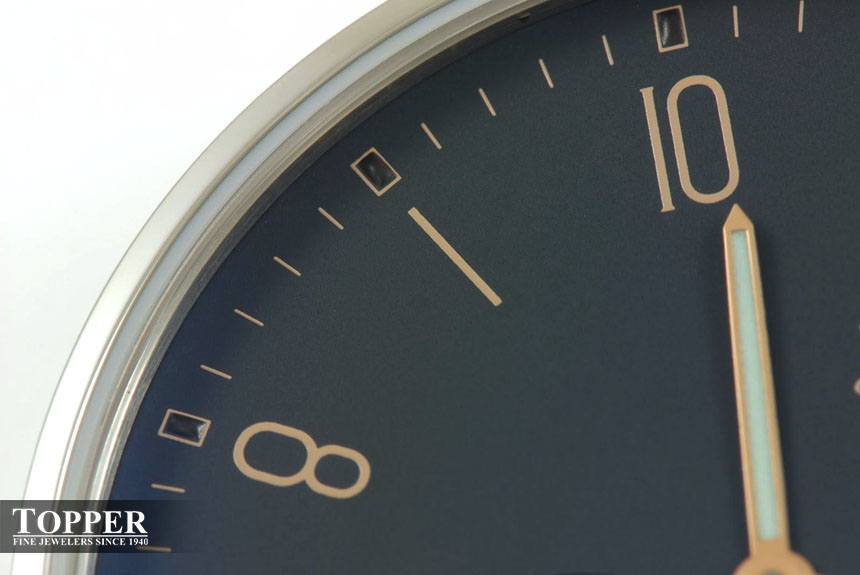 The darker lume hour markers on the Atlantik Dial. 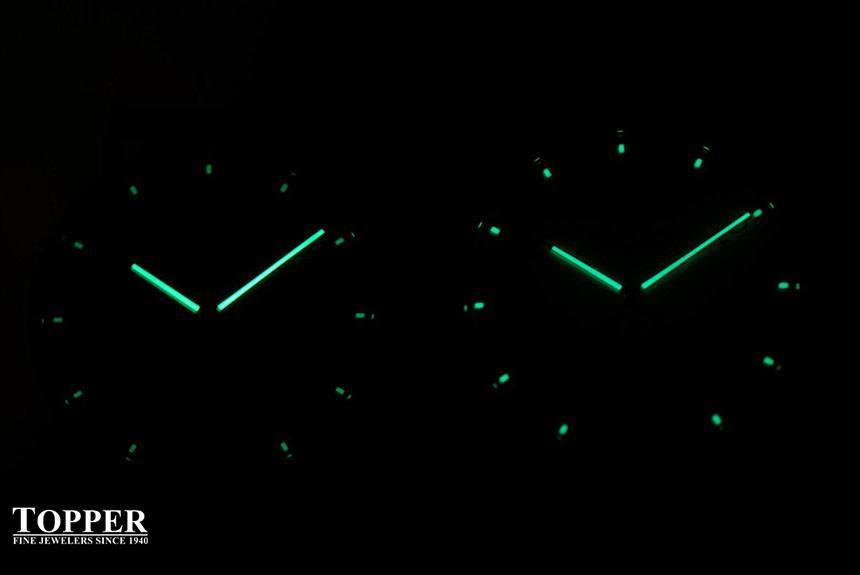 While the hands are identical, the Atlantik Ahoi (left) features darker lume on the hour markers than the light colored versions on the Ahoi models (right).

Below are photos of the Nomos Ahoi Datum… 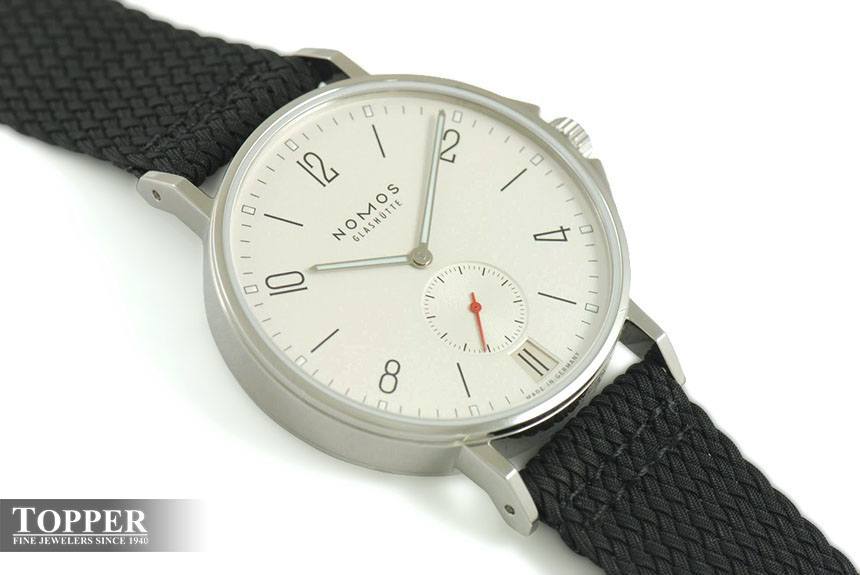 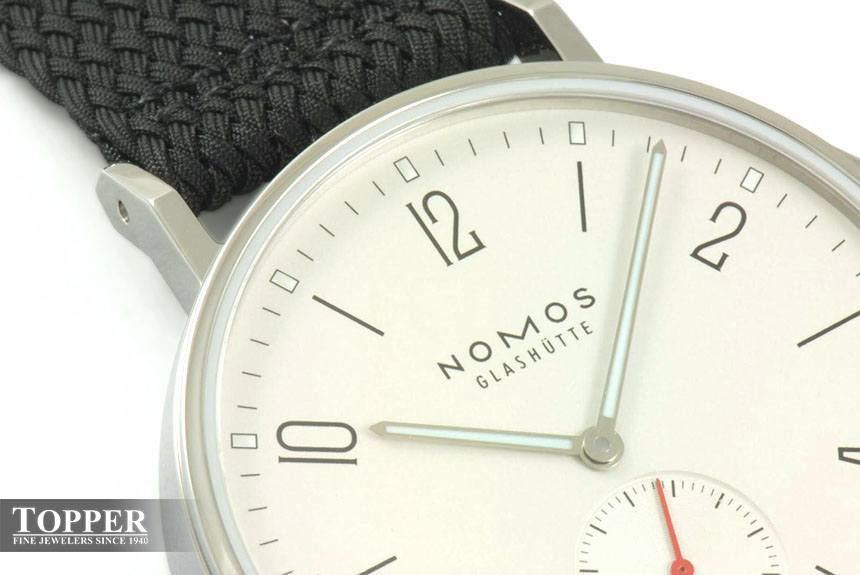 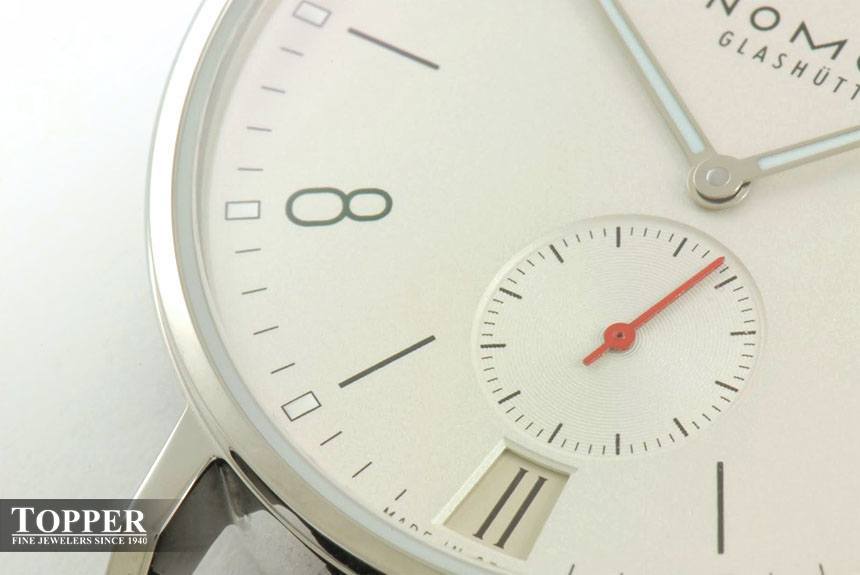 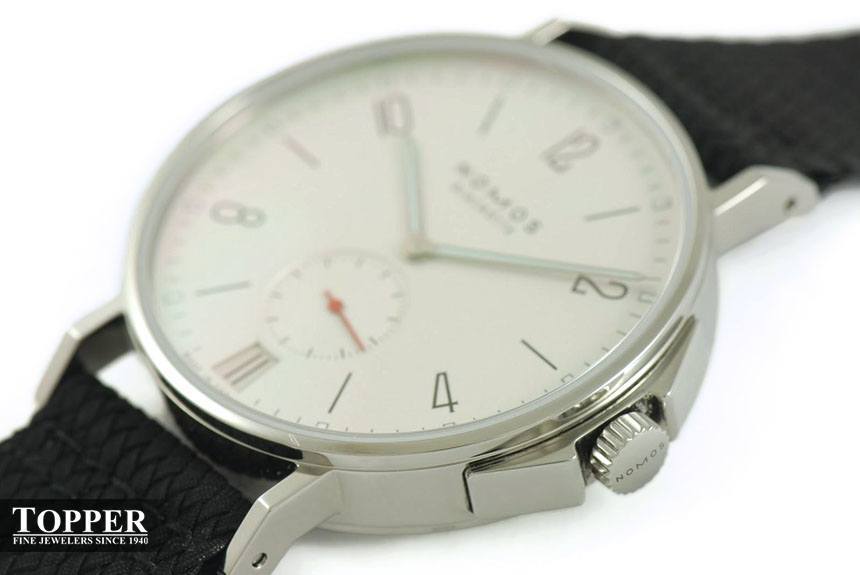 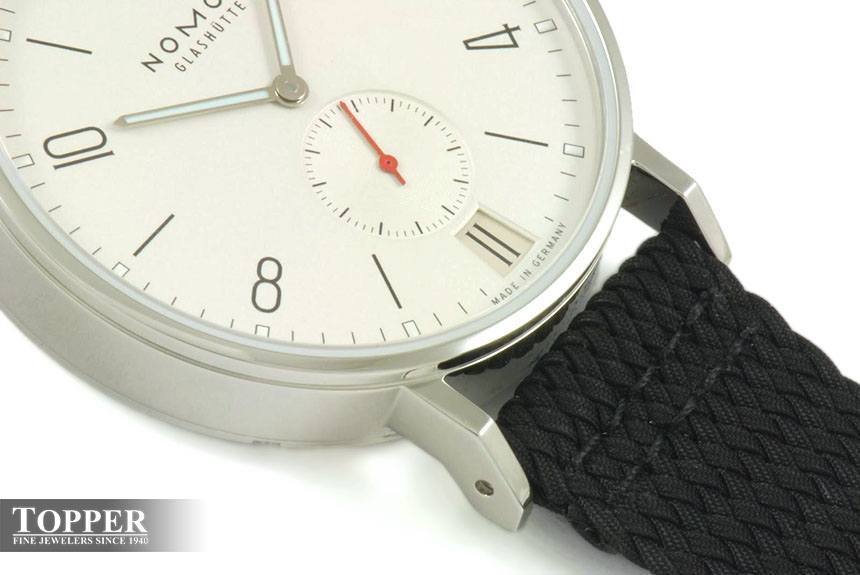 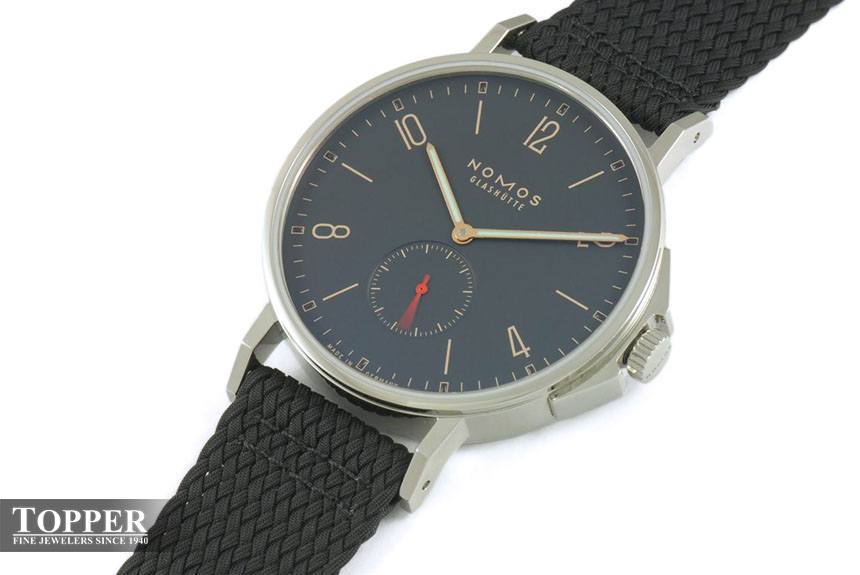 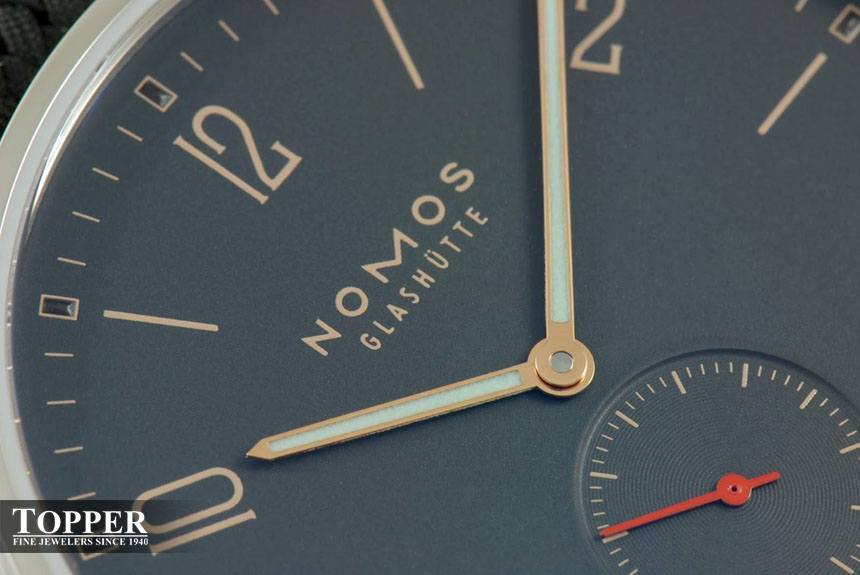 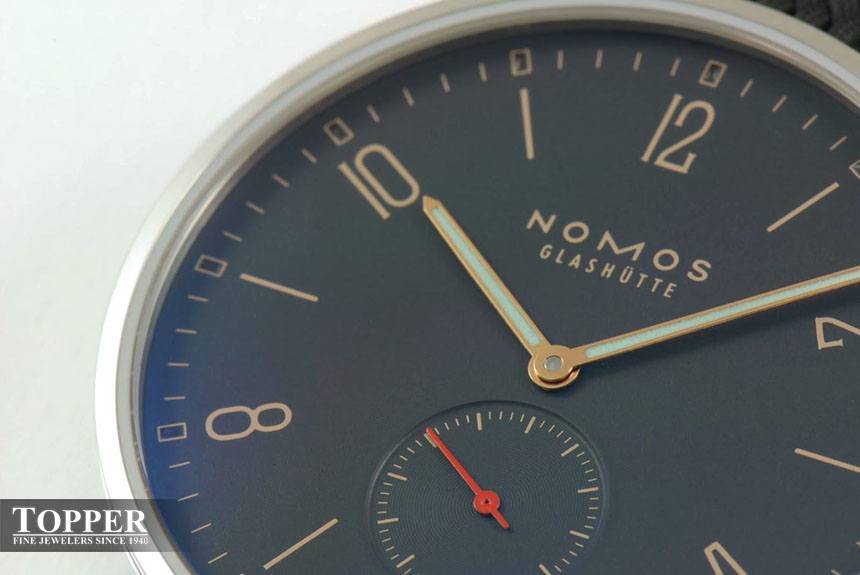 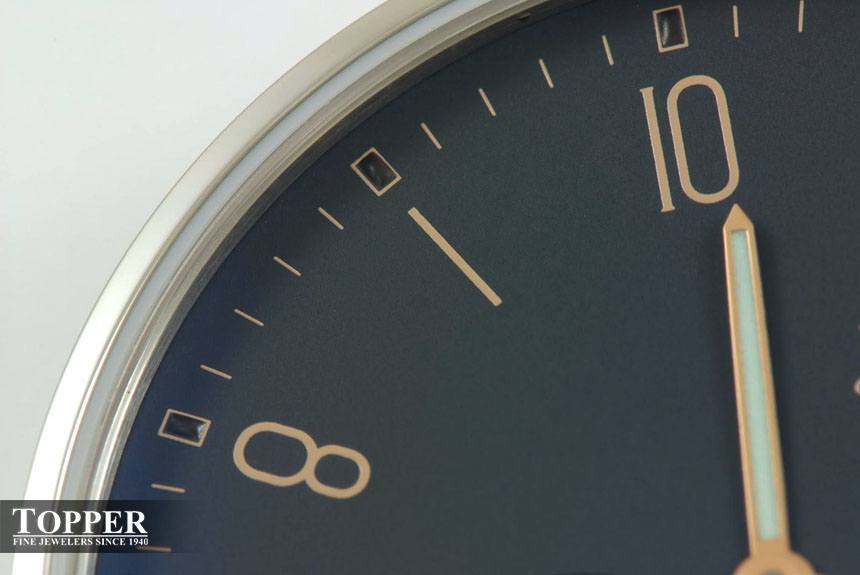 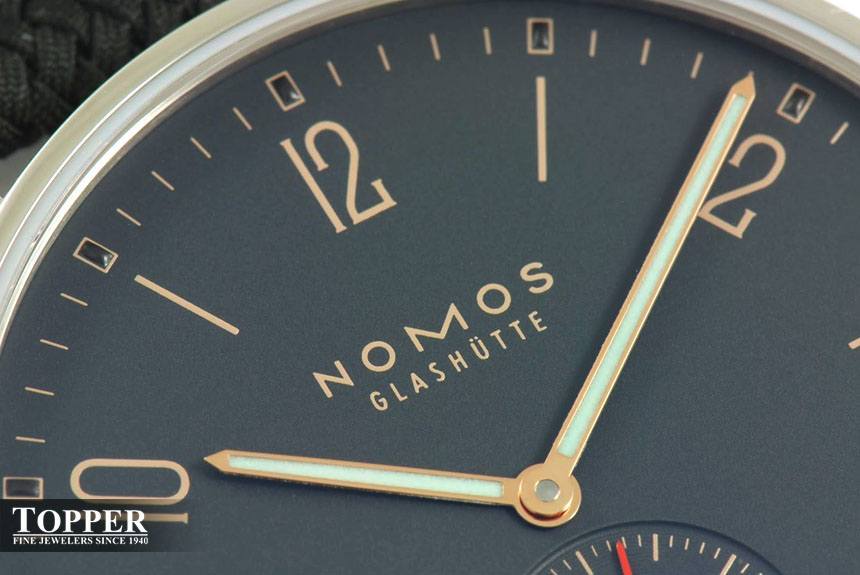 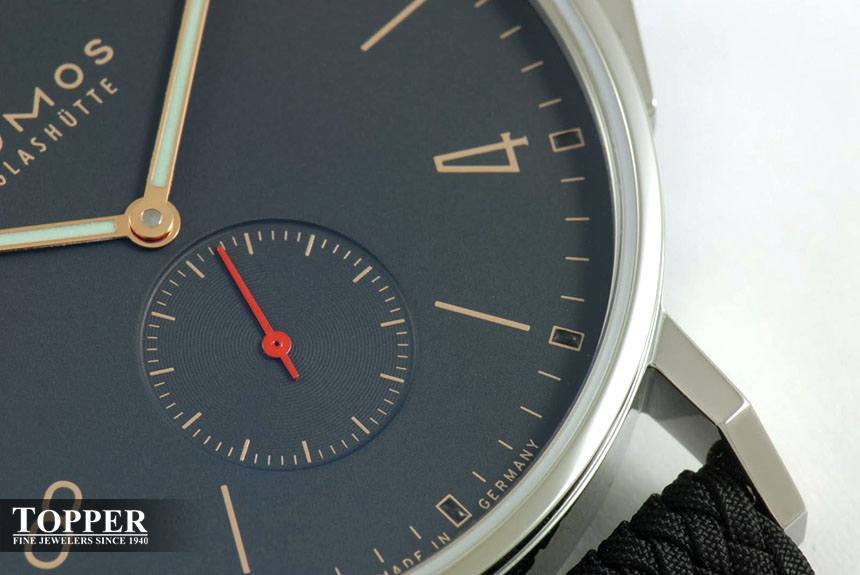 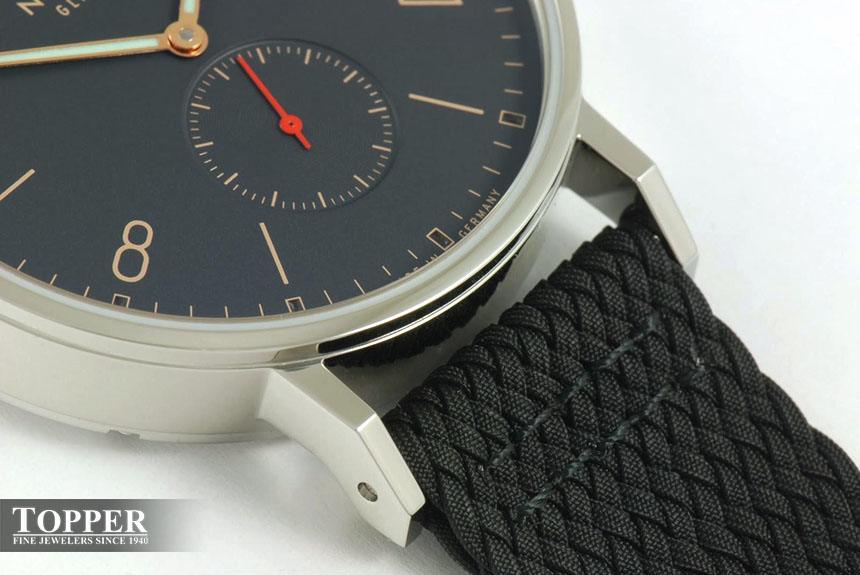 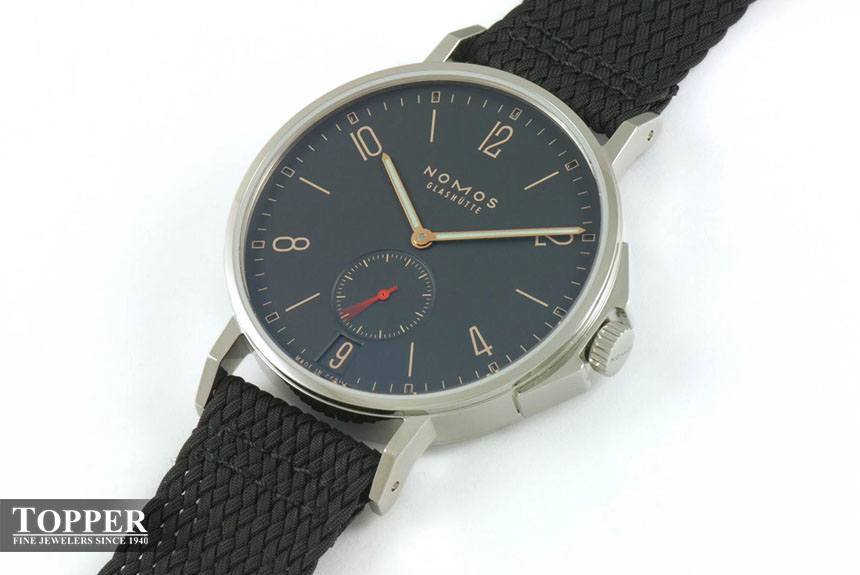 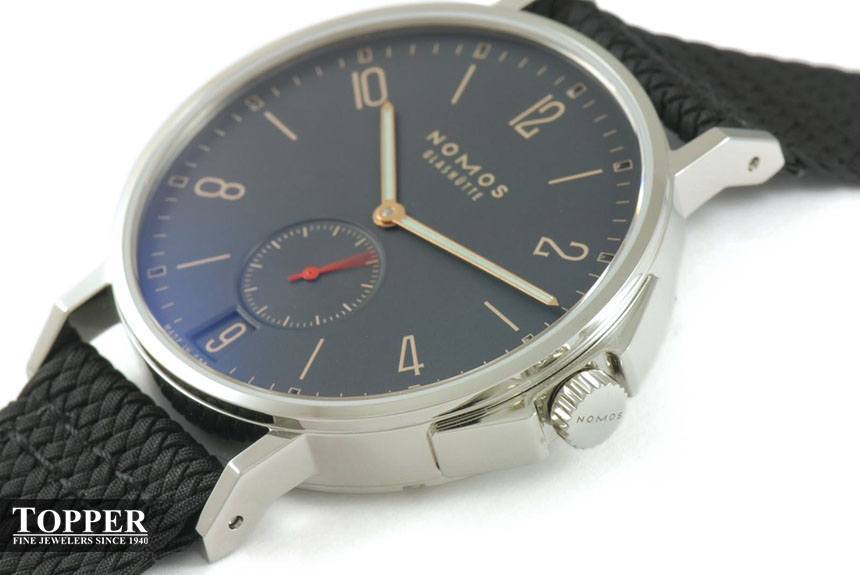 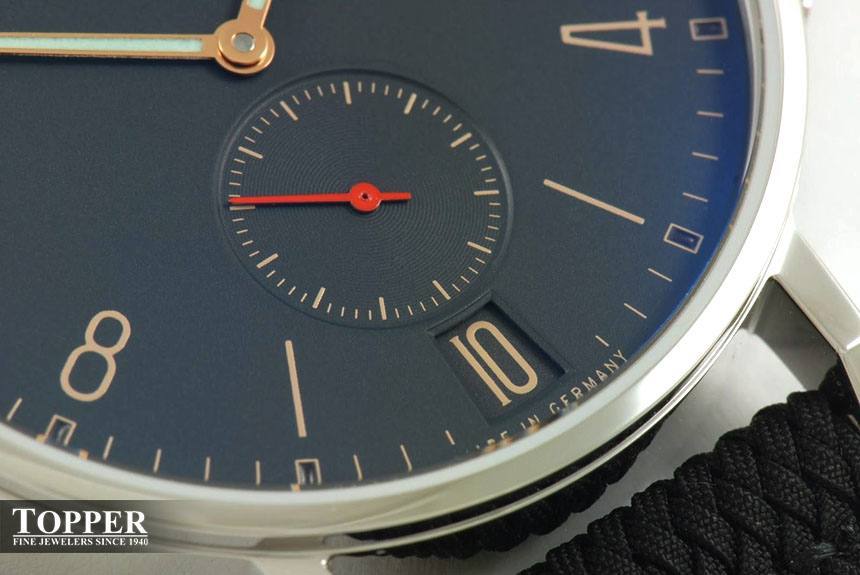 The movement is one of the most interesting features of any Nomos Glashütte Watch. The  Non-Date models feature their Epsilon Calibre, shown below. The Datum models feature the Zeta Calibre. Though the non-date Epsilon provides a 1-hour power reserve advantage (43 hours vs 42 hours for the Zeta), the movements have identical dimensions and both feature the traditional German elements of a three-quarter plate and blued screws. The movements also feature attractive pearlage patterns on the outside of the movement and incredibly smooth finish on the bridges, plates, and rotor. 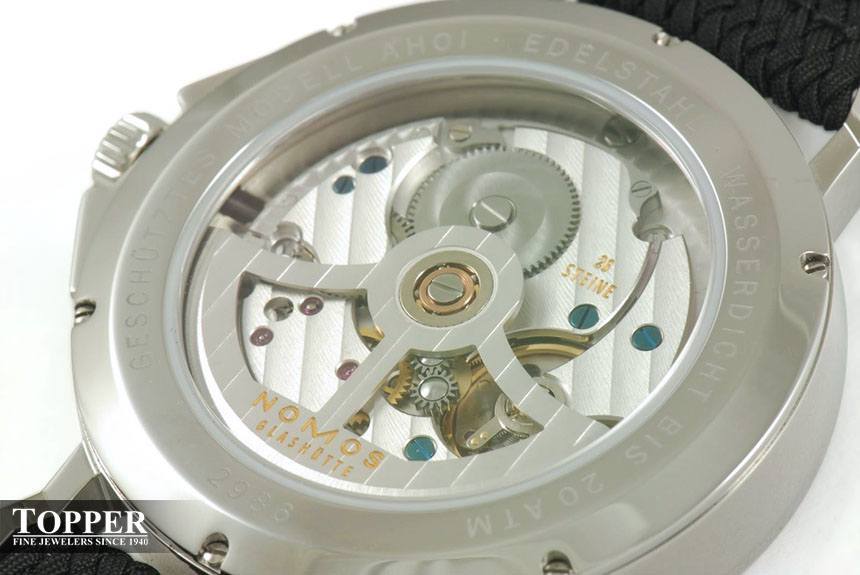 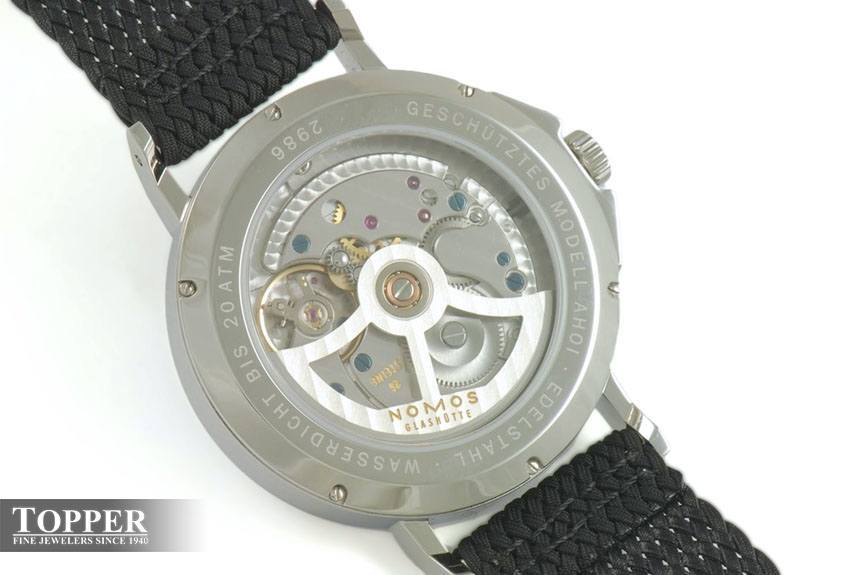 The strap on the Nomos Ahoi series is also different than other steel models. While the rest of the collection features Cordovan leather straps that are mildly water resistant, the Nomos Ahoi series features a mesh style textile strap in black with a winged clasp. Comfort is key with the strap, as it can be closed anywhere on the mesh ensuring a perfect fit to every wrist. As the Nomos Ahoi features a 20mm lug width, other more traditional Nomos straps are easy substitutions. nomos-glashuette.com 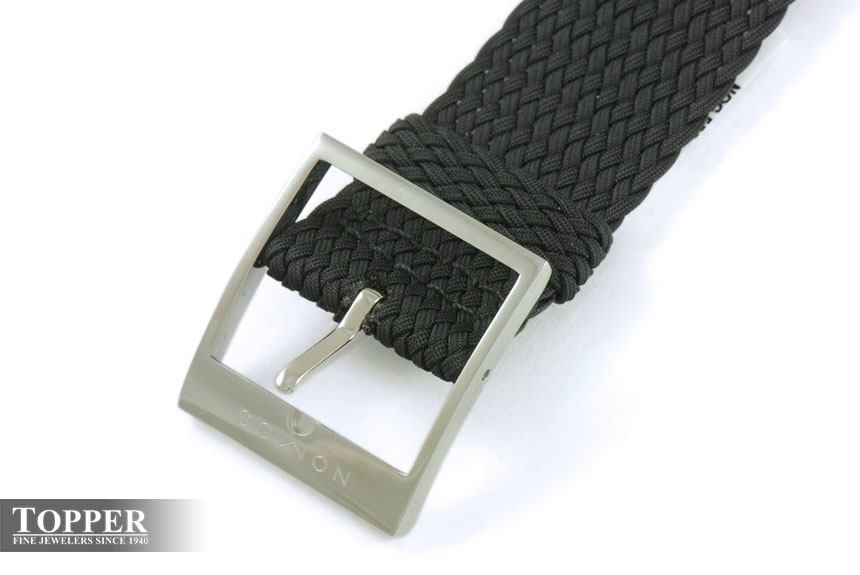 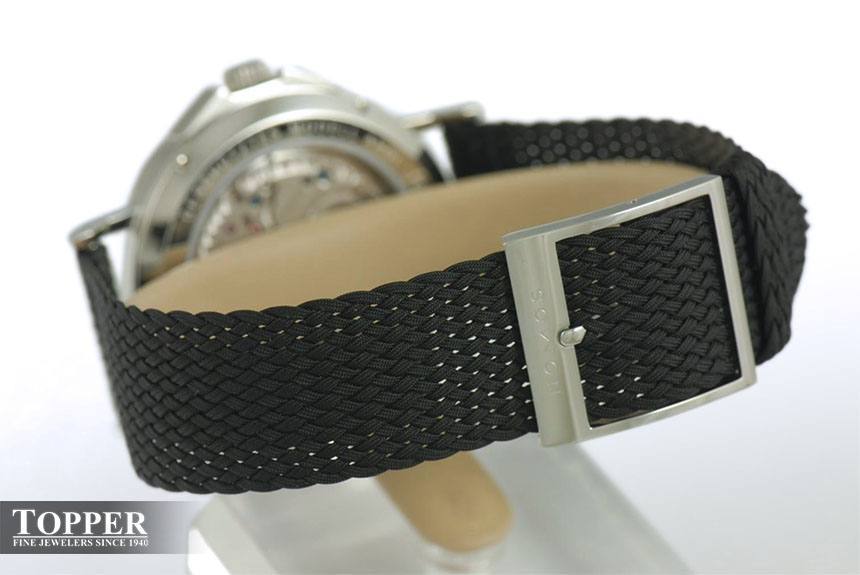