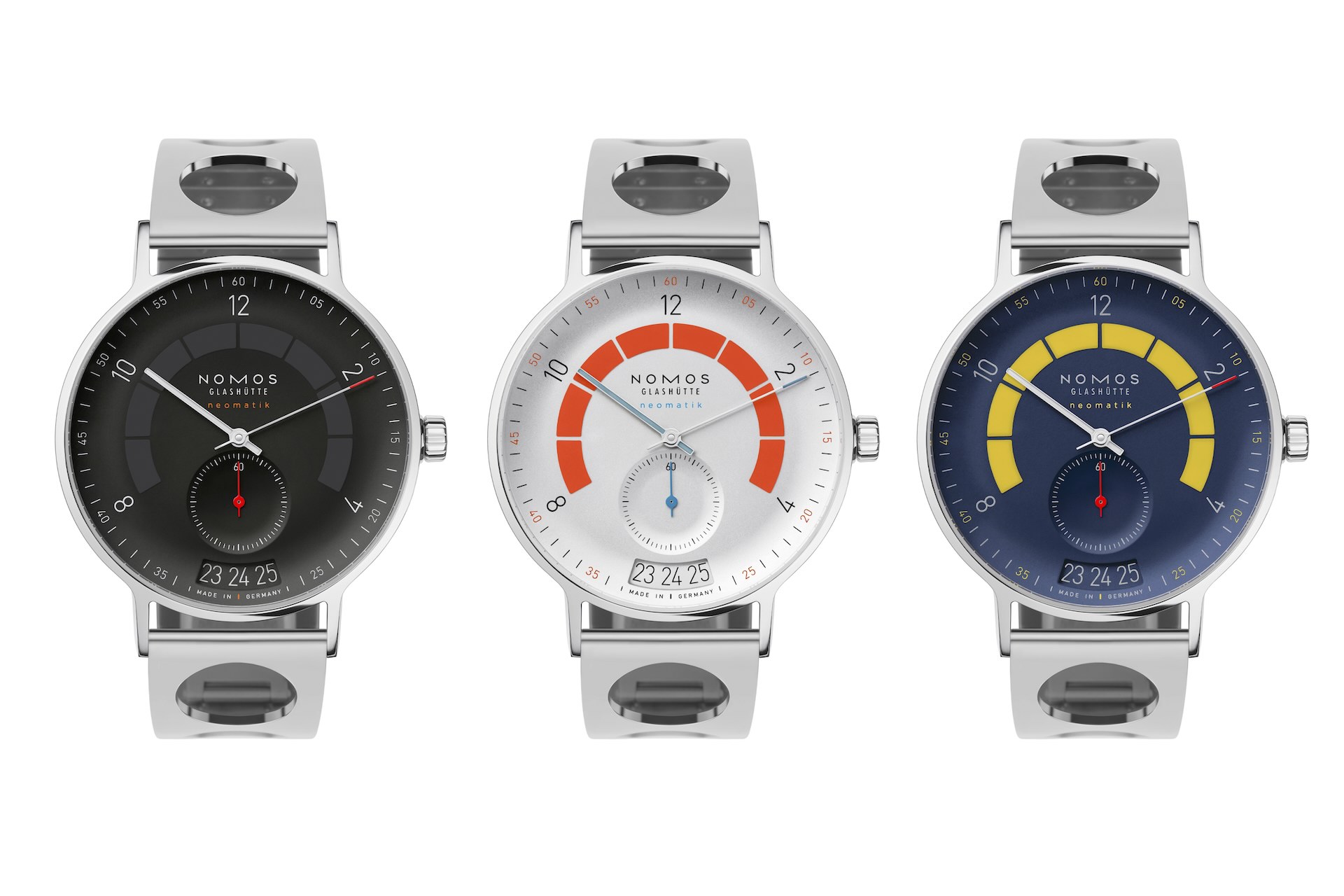 14 Comments
by SponsoredPost
Sponsored post presented on aBlogtoWatch for advertiser

NOMOS has always placed design at the forefront of its brand ethos. In doing so, the brand has built a sterling reputation for integrating color, typography, and design elements in unexpected ways. And while NOMOS may be best-known for a style that embraces minimalism and a fresh take on classic styles, the 2018 release of the Autobahn showed that NOMOS wasn’t afraid to flex its design muscles and bring something wholly unexpected to market. Inspired by cars lighting up Germany’s notorious speed-limit-free highway, the Autobahn captured NOMOS’ design language in a completely new way. NOMOS is now releasing three new “Director’s Cut” versions of the Autobahn in three striking colorways and a racing-inspired bracelet. 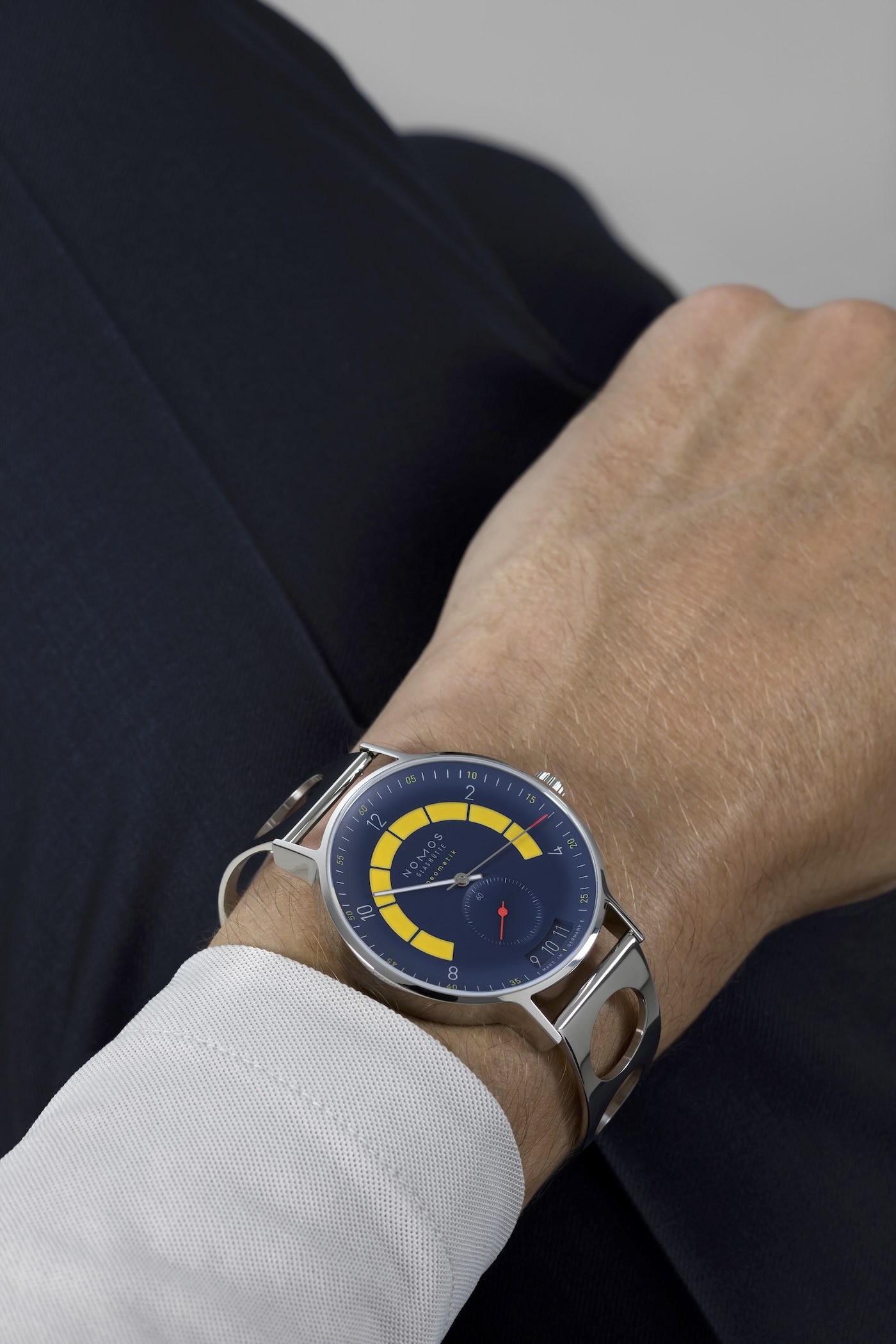 Glashütte can trace its rise in watchmaking prominence to the arrival of master watchmaker Ferdinand Adolph Lange. In 1845, Lange was sent to the impoverished mining town by the Saxon King to help revitalize the region’s economy. Lange trained countless watchmakers and transformed the sleepy town into a mecca for German watchmaking. In the decades that followed, other brands would set up shop, adhering to strict standards of excellence originally established by Lange. In order for a watch to earn the Made in Glashütte appellation, at least 50% of the value of the watch’s caliber must be created on site (NOMOS watches far exceed this standard, with over 95% of its calibers created on site). Glashütte watches also feature a trademark three-quarter plate, barrel, gear train, Glashütte stopwork, swan-neck fine adjustment, and movement decoration that have become emblematic of the region’s watches. 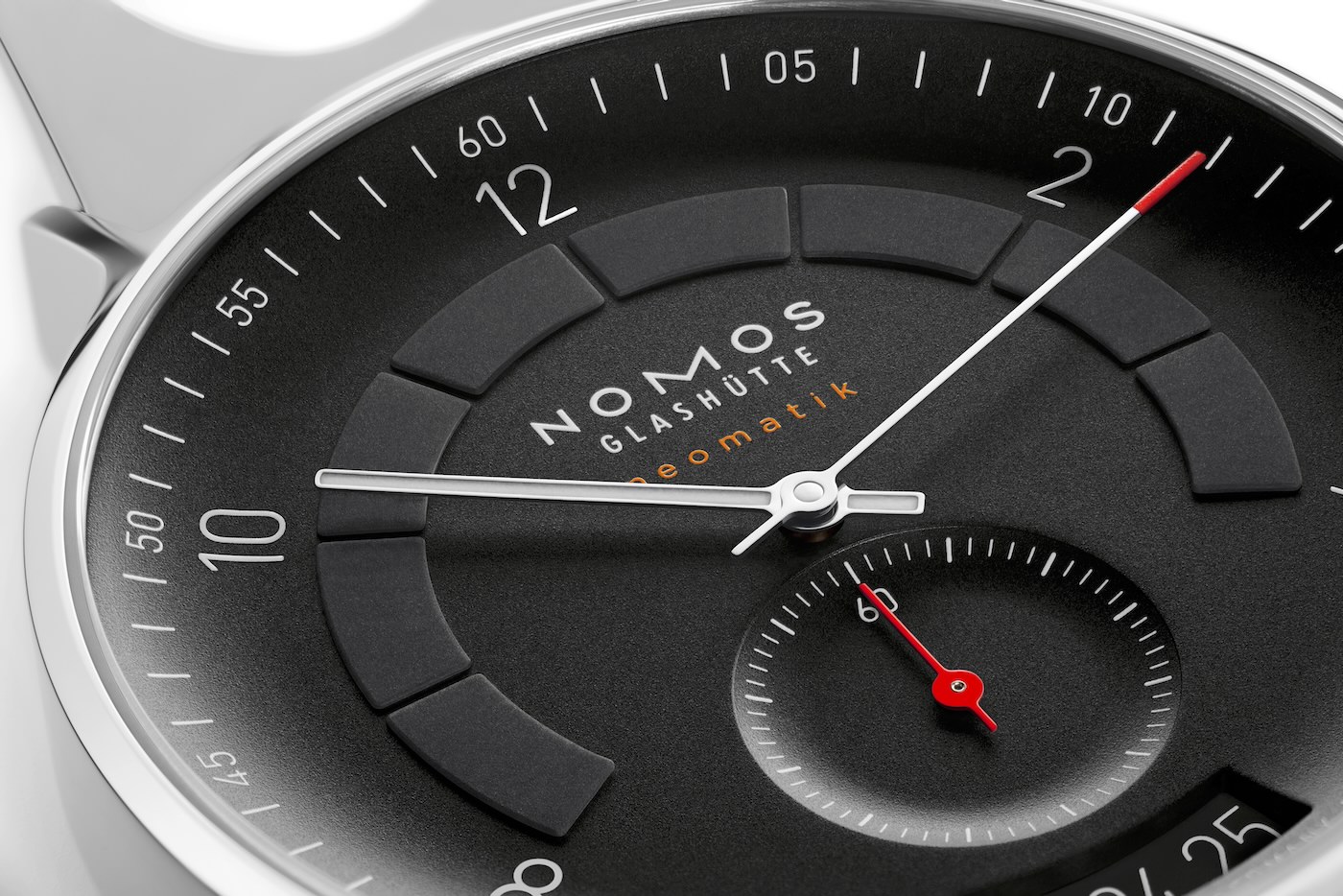 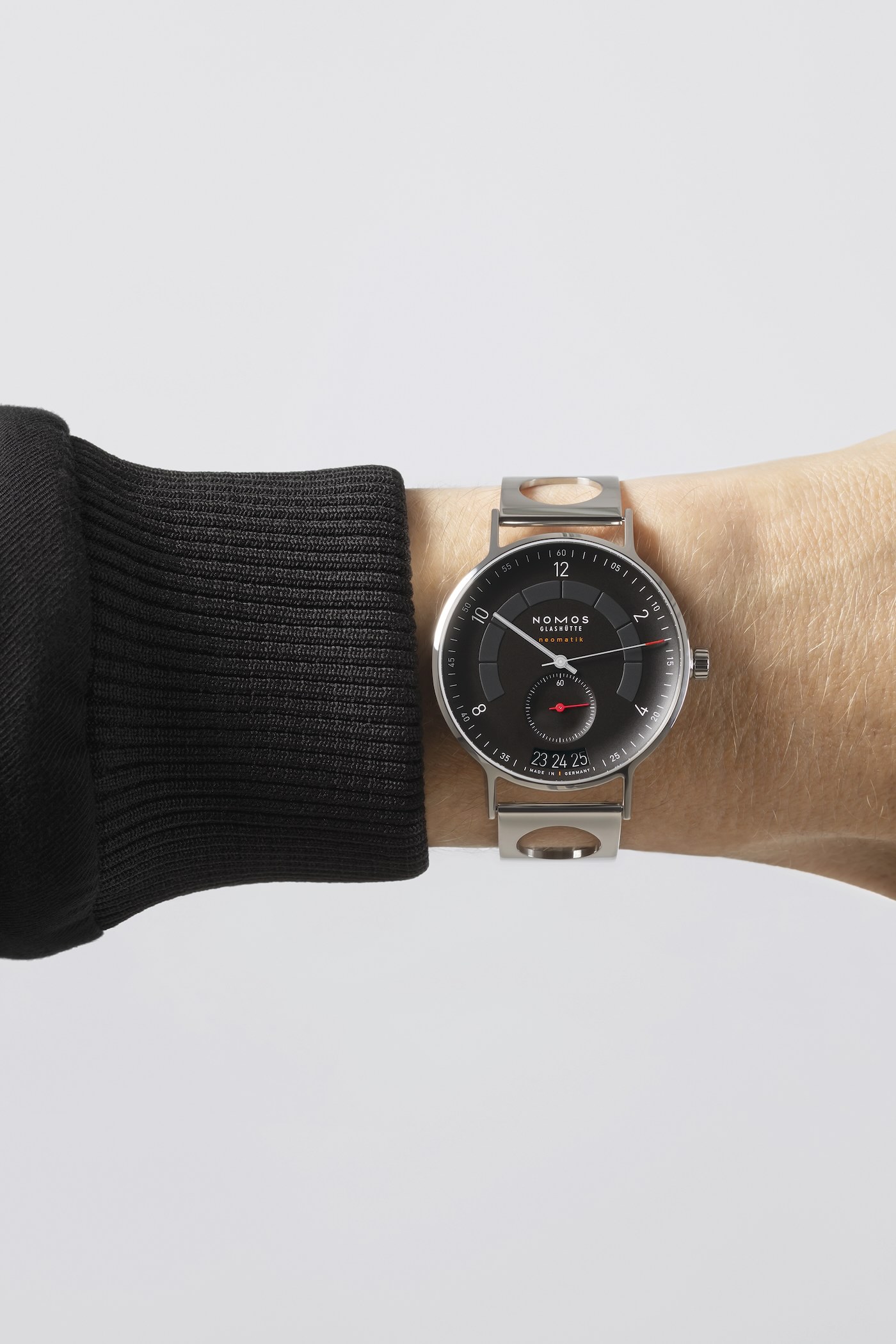 Though NOMOS is nothing if not modern in design and execution, it is also a full-fledged member of Glashütte’s venerable watchmaking fraternity. NOMOS was established in 1990, shortly after the fall of the Berlin Wall, setting up manufacturing in the traditional heart of Saxon watchmaking, which had been decimated after WWII. NOMOS wanted to be part of the region’s resurgence and return to prominence in watchmaking. No question that they’ve more than played their part. 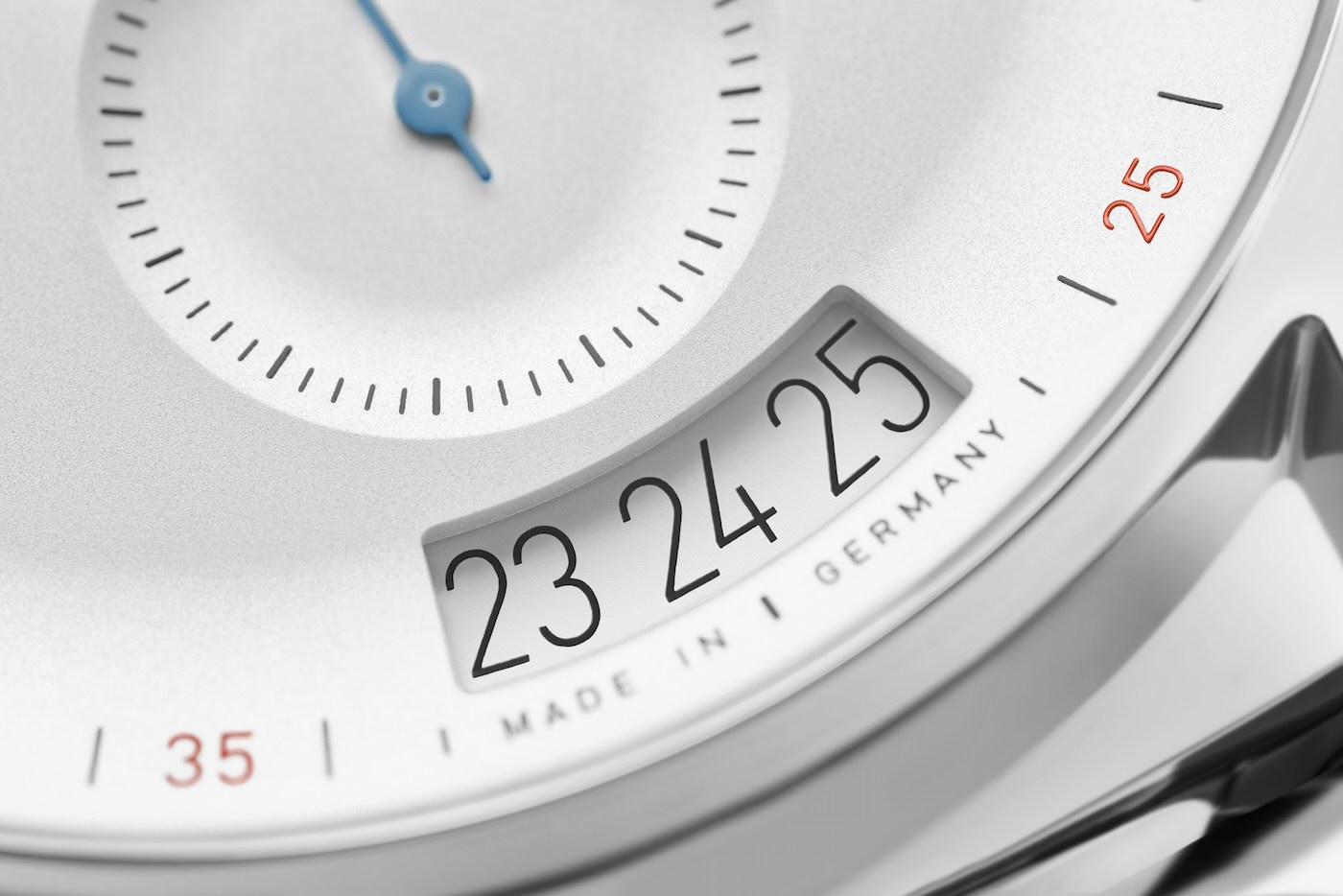 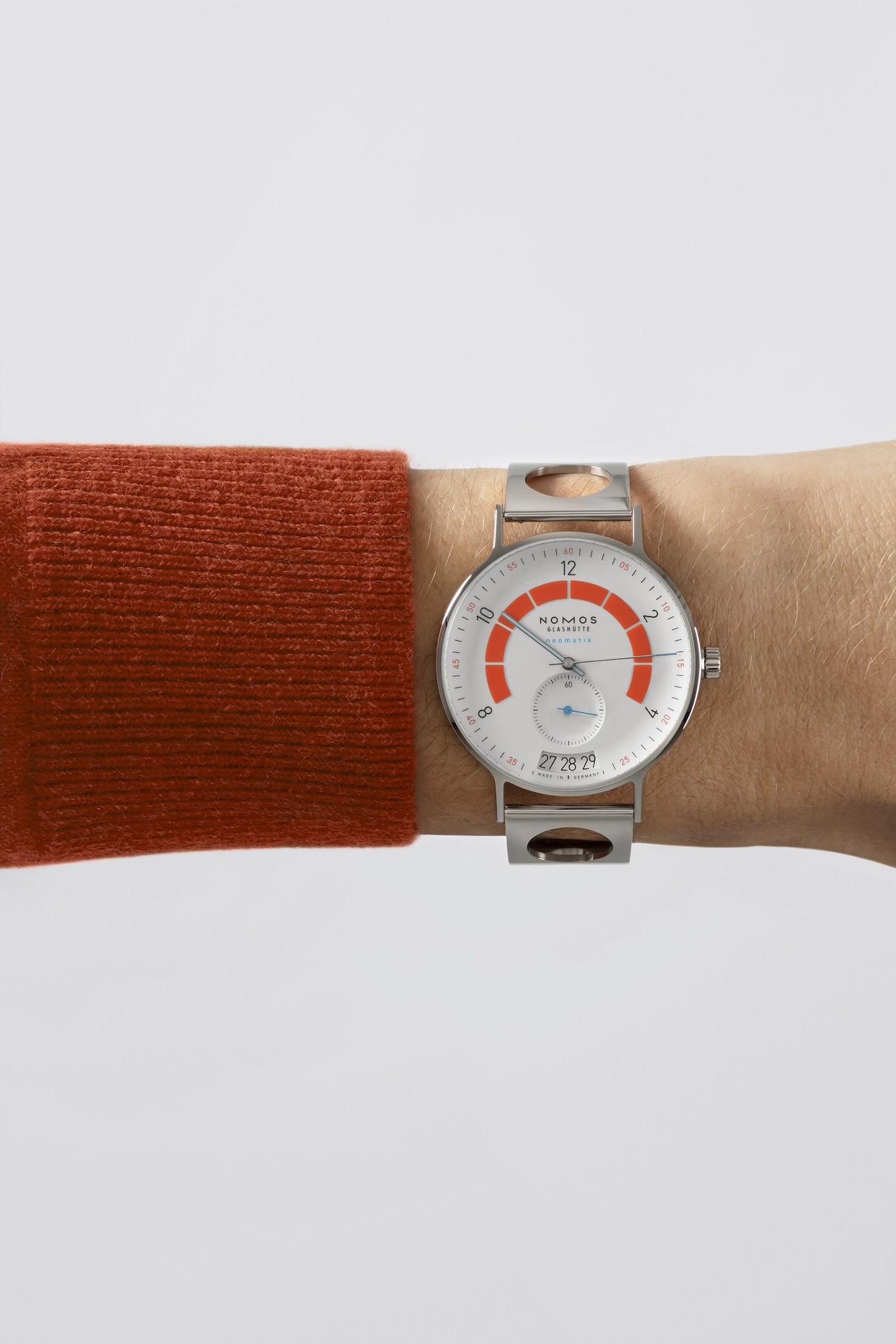 NOMOS has earned innumerable accolades for its designs over the years, creating an instantly recognizable design language that draws inspiration from the Bauhaus school of design. In developing the 41mm Autobahn, NOMOS turned to renowned designers and partners Werner Aisslinger and Tina Bunyaprasit. In describing the design of the Autobahn, the team explains, “Our Autobahn dial is inspired by the instruments of legendary sports cars from the 70s and 80s. The zenith of automotive design gave us not only spectacular vehicle bodies and silhouettes but also interior designs and dashboard instruments, which remain the templates and archetypes for the development of transportation to this day.” 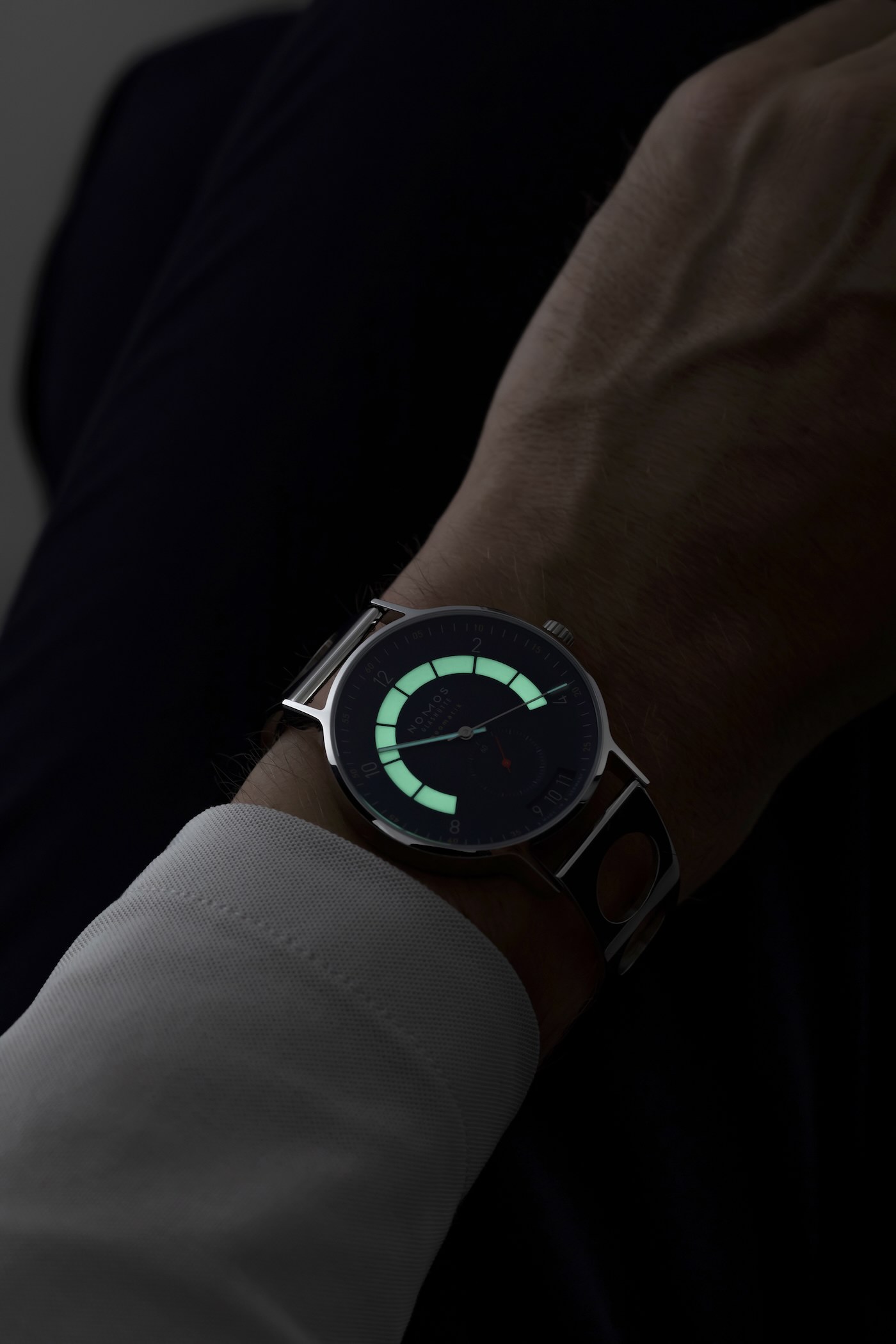 While the original Autobahn models are hardly subtle in their design and colors, with the Director’s Cut Edition, Aisslinger and Bunyaprasit wanted to go bold with colors that sang to them, personally. Named after three major freeways in Germany, the A3, A7, and A9 watches each have their own distinct styles. As Aisslinger and Bunyaprasit describe their choice of colorways, “The A9, with its black and gray dial, represents a minimalist design. The A3 is reminiscent of the dashboard instruments of the 80s. The illuminated red ring on a white dial underscores the sportive character of this watch. Fans of 60s and 70s chronometers will love the blue and yellow contrast of the A7.” 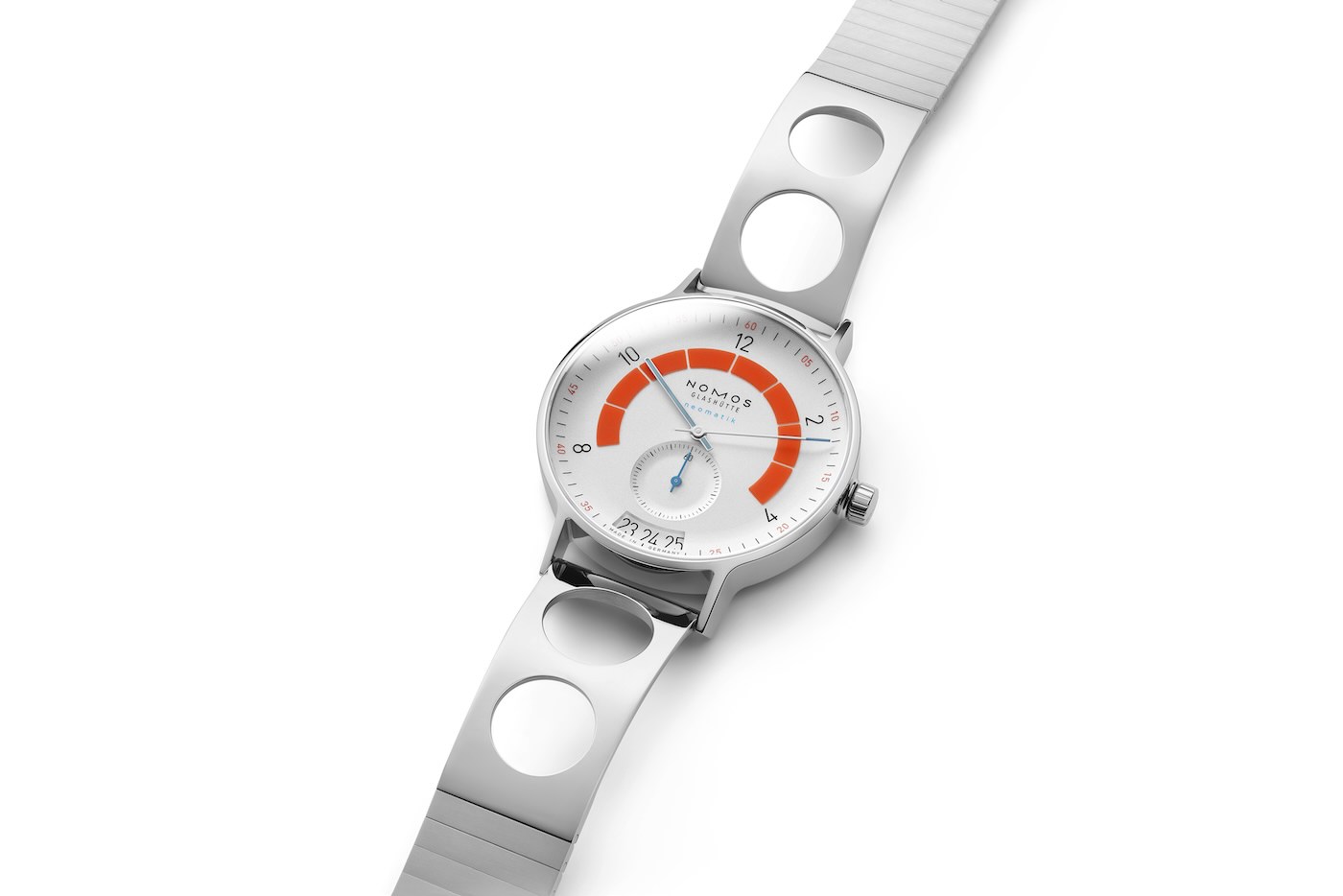 While NOMOS watches are known for their superb leather and textile straps, in recent years, the brand has embraced bracelets in their sports lines in a style that is distinctly NOMOS. The recently released Sport Bracelet utilizes horizontal, independently articulating links, each secured by two screws and the bracelet can be easily swapped out using integrated quick-release spring bars. Buttery smooth articulation is an understatement — the bracelets melt on the wrist. With these new releases, Aisslinger and Bunyaprasit decided the Sport Bracelet wasn’t quite sporty enough, so they decided to modify the design, adding a cuff that emulates racing gloves and rally straps from the 1960s and 70s. Clearly, Aisslinger and Bunyaprasit had no plans to hold back on the Director’s Cut. 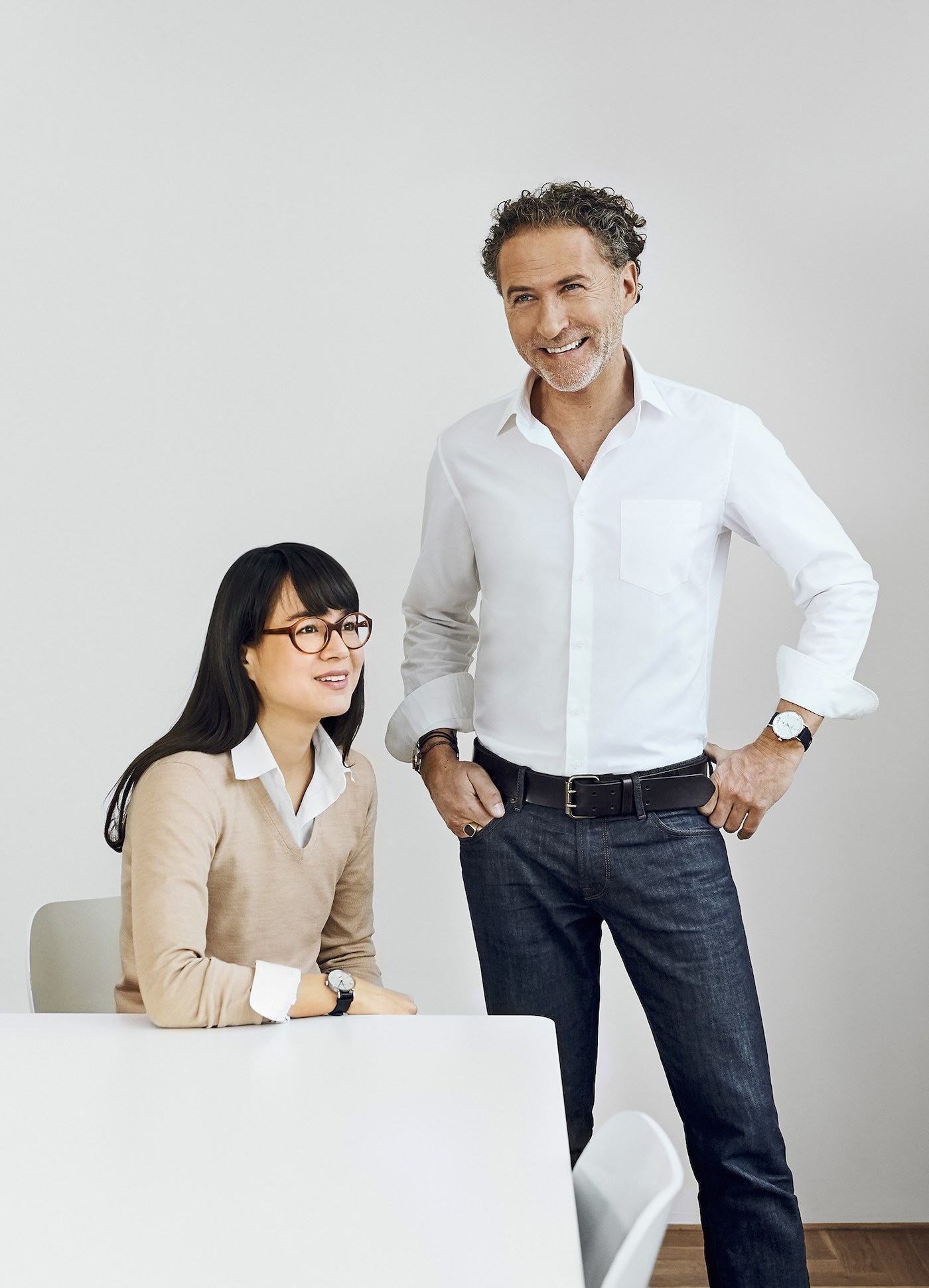 The beauty of NOMOS watches is never just skin deep. Visible behind the sapphire caseback is the NOMOS neomatik caliber 6101 movement. This automatic winding movement is incredibly slender for a watch with a date mechanism, measuring in at a svelte height of only 3.6mm. The caliber 6101 features NOMOS’s Swing System, 27 jewels, and a 42-hour power reserve. Since the movement is regulated in six positions to chronometer standards, you should expect superb timekeeping for years. But NOMOS ensures that its in-house movements are as gorgeous as they are functional. The 6101 features a Glashütte three-quarter plate, tempered blue balance spring and screws, Glashütte ribbing, and perlage. 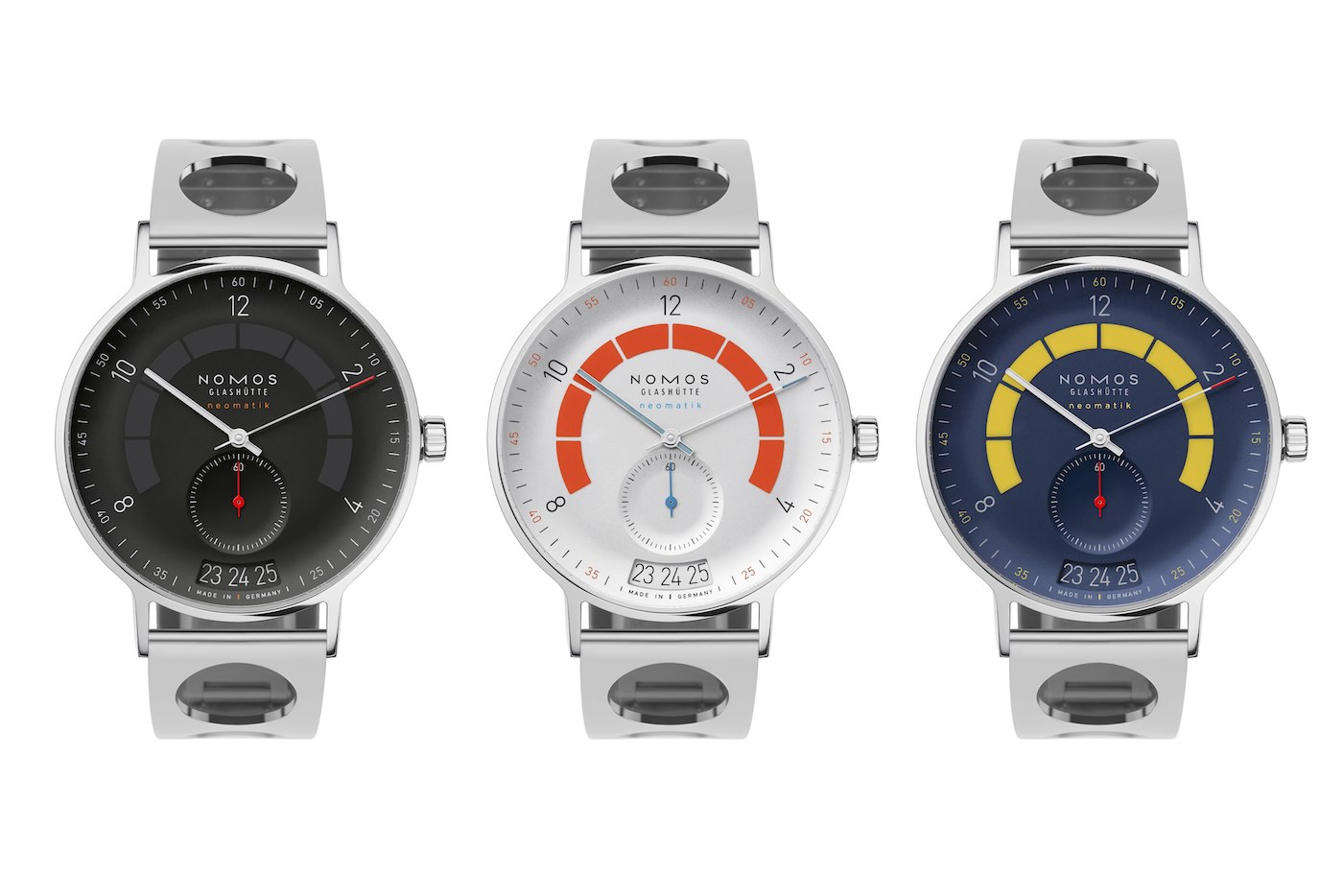