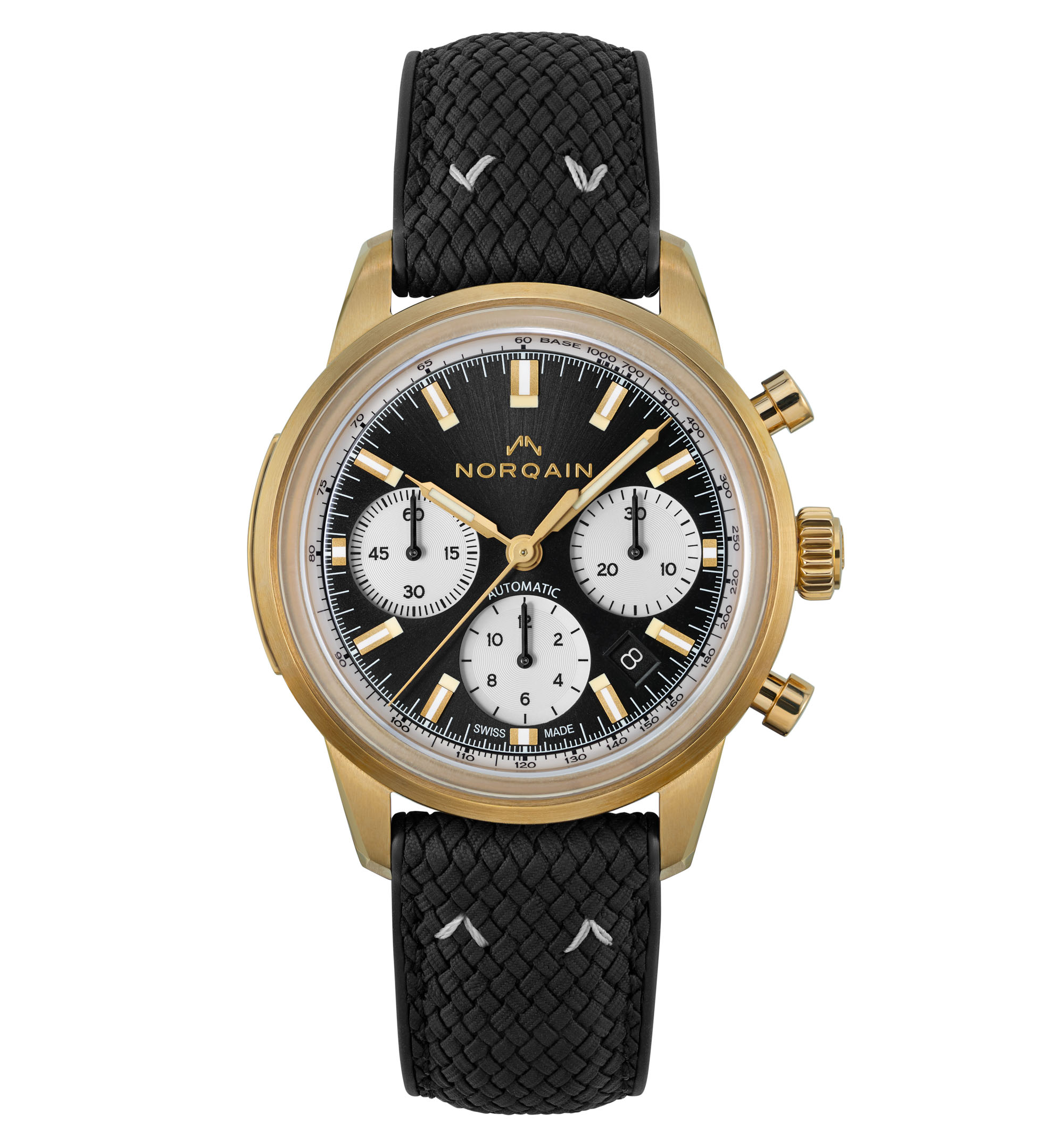 As its final release of 2022, NORQAIN has unveiled a new limited-edition bronze version of its popular 40mm Freedom 60 Chrono. For the most part, NORQAIN largely produces sports watches, although the vintage-inspired lines of the Freedom collection offer some of the most refined designs within its entire catalog. As a model, the 40mm version of the Freedom 60 Chrono is hardly a brand-new watch, and bronze has even made an appearance on the Freedom collection before in both three-hand and GMT formats; however, this popular warm metal has now made its way to NORQAIN’s retro-themed chronograph. According to the brand, the Freedom 60 Chrono is its best-selling model, and the new NORQAIN Freedom 60 Chrono 40mm Bronze takes the smaller version of its fan-favorite chronograph and gives it a bronze case with a “reverse panda” dial that features matching bronze accents. 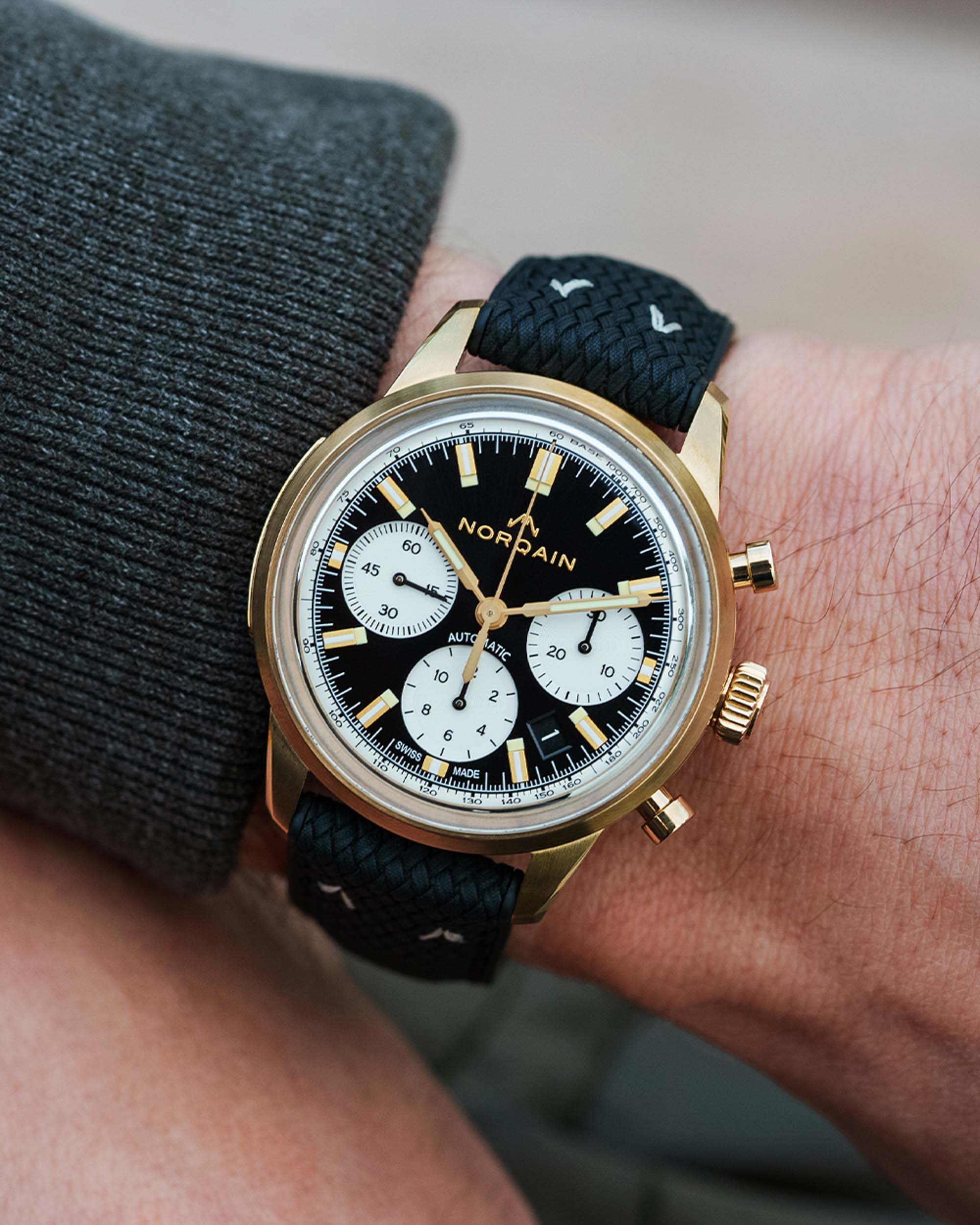 With regard to its external design and dimensions, the case of the new NORQAIN Freedom 60 Chrono 40mm Bronze is identical to its stainless steel counterparts, and it measures 40mm in diameter by 14.9mm thick, with 20mm lugs and a total lug-to-lug distance of 49.27mm. Additionally, everything else in terms of its overall design and configuration will be the exact same as what you will find on the 40mm stainless steel models, including its signed screw-down crown, pump-style pushers, box-shaped sapphire crystal, and display-style caseback. Similarly, like all NORQAIN watches, the new Freedom 60 Chrono 40mm Bronze features a small removable plate on the side of its case at 9 o’clock that can be used for engravings, and just like the stainless steel models, the new bronze edition also offers users 100 meters of water resistance. Realistically, speaking, everything in regards to the case is exactly what you would expect from a 40mm Freedom 60 Chrono, except for the fact that it is crafted from bronze rather than stainless steel. 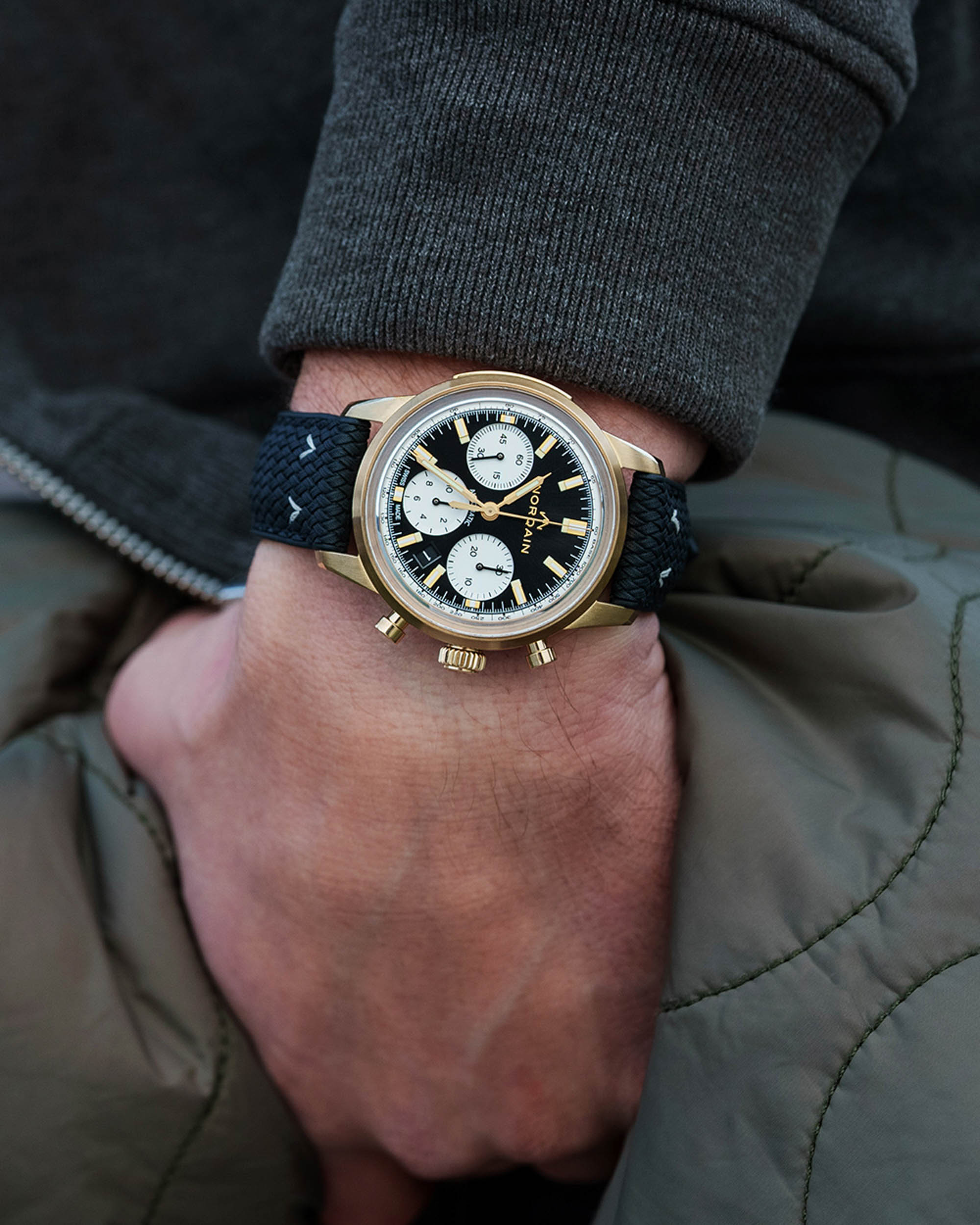 It’s also worth noting that the type of bronze NORQAIN uses is more of the gold/brass-colored variety, rather than having the rose gold/copper color that characterizes other bronze alloys. Therefore, the end product is a watch that offers more of a dark golden color, which will still darken further and patina over time with prolonged exposure to the elements. NORQAIN does not specify the exact variety of bronze used in the construction of its cases, although for anyone who isn’t familiar with the brand’s bronze models, their overall color is much more in-line with the flat yellow tones that you get from IWC or Tudor’s modern catalog, rather than the warm red tint that you might see in the bronze watches produced by brands such as Panerai or Oris. Additionally, just like other bronze NORQAIN models, the new Freedom 60 Chrono 40mm Bronze features a screw-down caseback made from stainless steel with a bronze PVD finish, which minimizes the potential for reactivity with the skin and also helps prevent the two components from fusing together due to excessive oxidation. 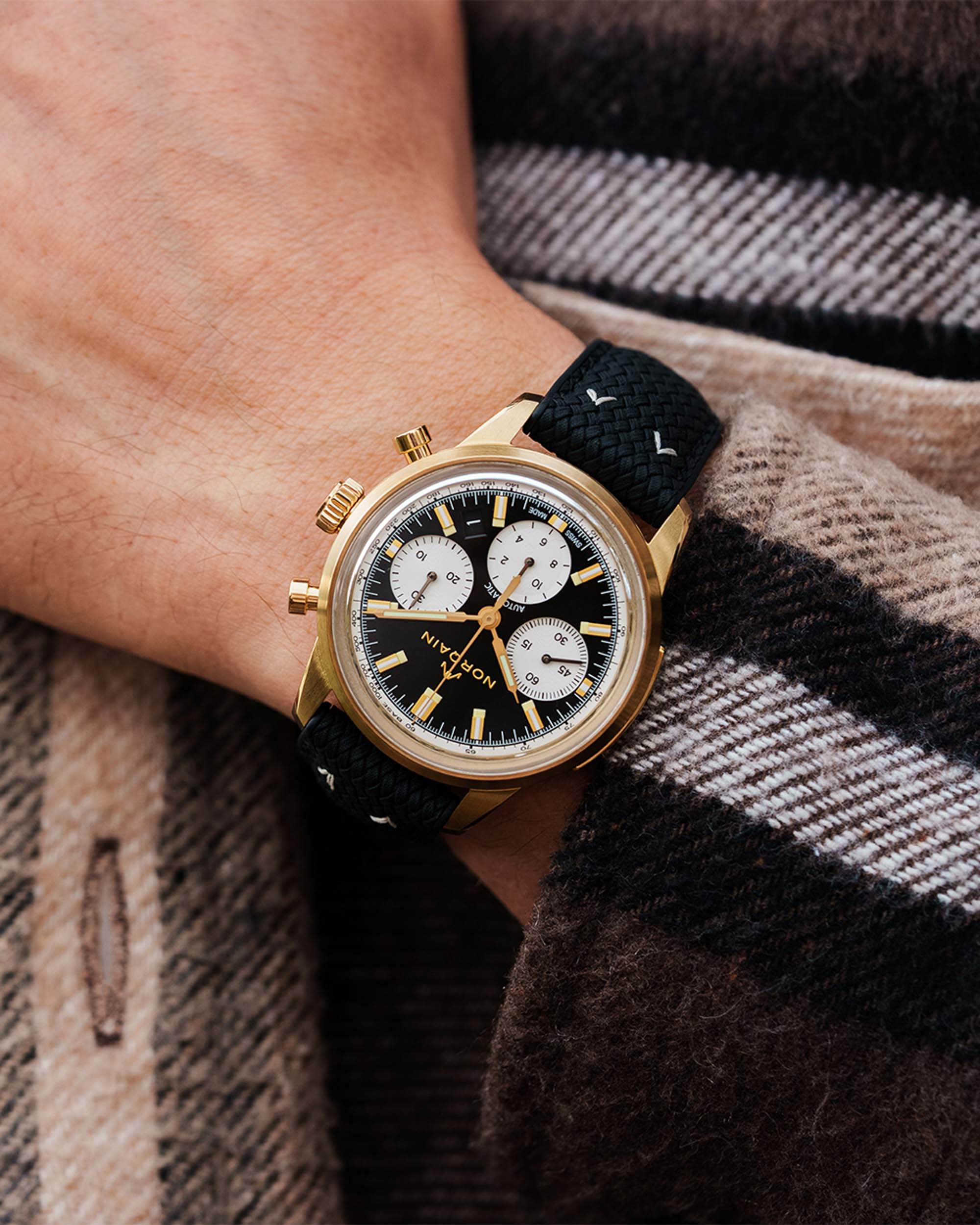 Just like the case of the watch, the dial fitted to the new NORQAIN Freedom 60 Chrono 40mm Bronze is essentially a bronze version of the standard dial, complete with the same layout and 1960s-inspired design. That said, it also features a color that is not currently available for the 40mm stainless steel models and is only found on the larger 43mm version. Unlike the stainless steel options, which are available with either blue or anthracite dials, the new Freedom 60 Chrono 40mm Bronze is fitted with a black “reverse panda” dial with contrasting white registers and a white tachymeter scale surrounding its periphery. The overall design of the dial is carried over from the steel versions, with a three-register layout and a date window at the 4:30 location. However, on this new model, the hands and hour markers appear in bronze to match the case and they are finished with Old Radium colored Super-LumiNova to provide them with a warmer overall appearance. 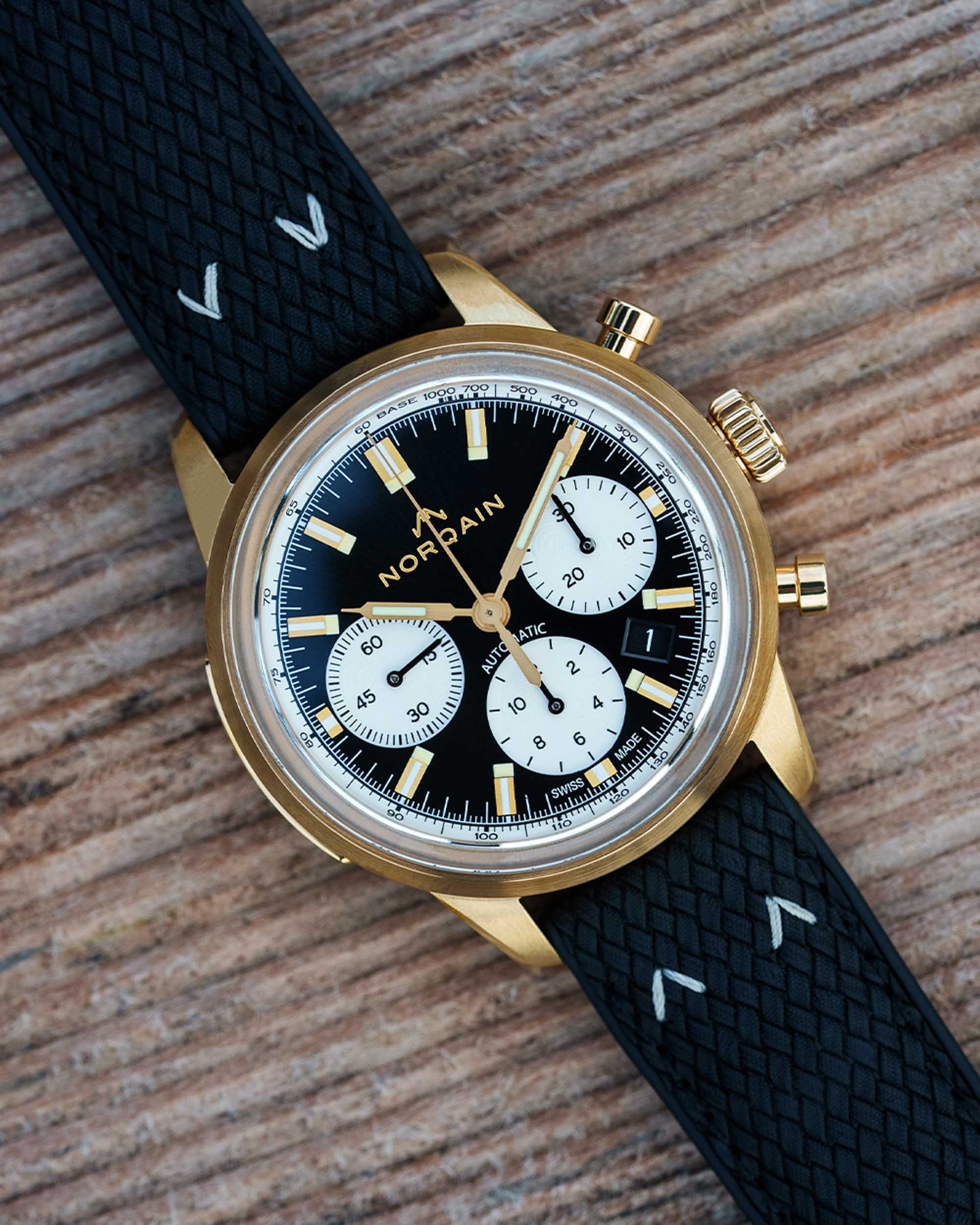 The movement powering the new NORQAIN Freedom 60 Chrono 40mm Bronze is identical to what can be found inside its stainless steel counterparts, and through the sapphire display window in the caseback, you will see the NORQAIN Caliber NN18 automatic chronograph movement, which is the brand’s version of the popular ETA 7753 that comes complete with a NORQAIN-decorated oscillating weight. As such, the Cal. NN18 features 27 jewels, and 120 parts, and it runs at a frequency of  28,800vph (4 Hz) with a power reserve of approximately 48 hours. Like its ETA base caliber, adjustment of the date is performed by pressing a separate push-piece, which appears as a small button flush against the side of the case near the 10 o’clock location. Although no bracelet is available for this new bronze edition, buyers do have the option between different straps. All options follow a two-piece construction and are fitted with standard pin buckles, although materials include fabric and Alcantara, in addition to a rubber and Perlon hybrid strap that offers a distinctly more sporty overall appearance. 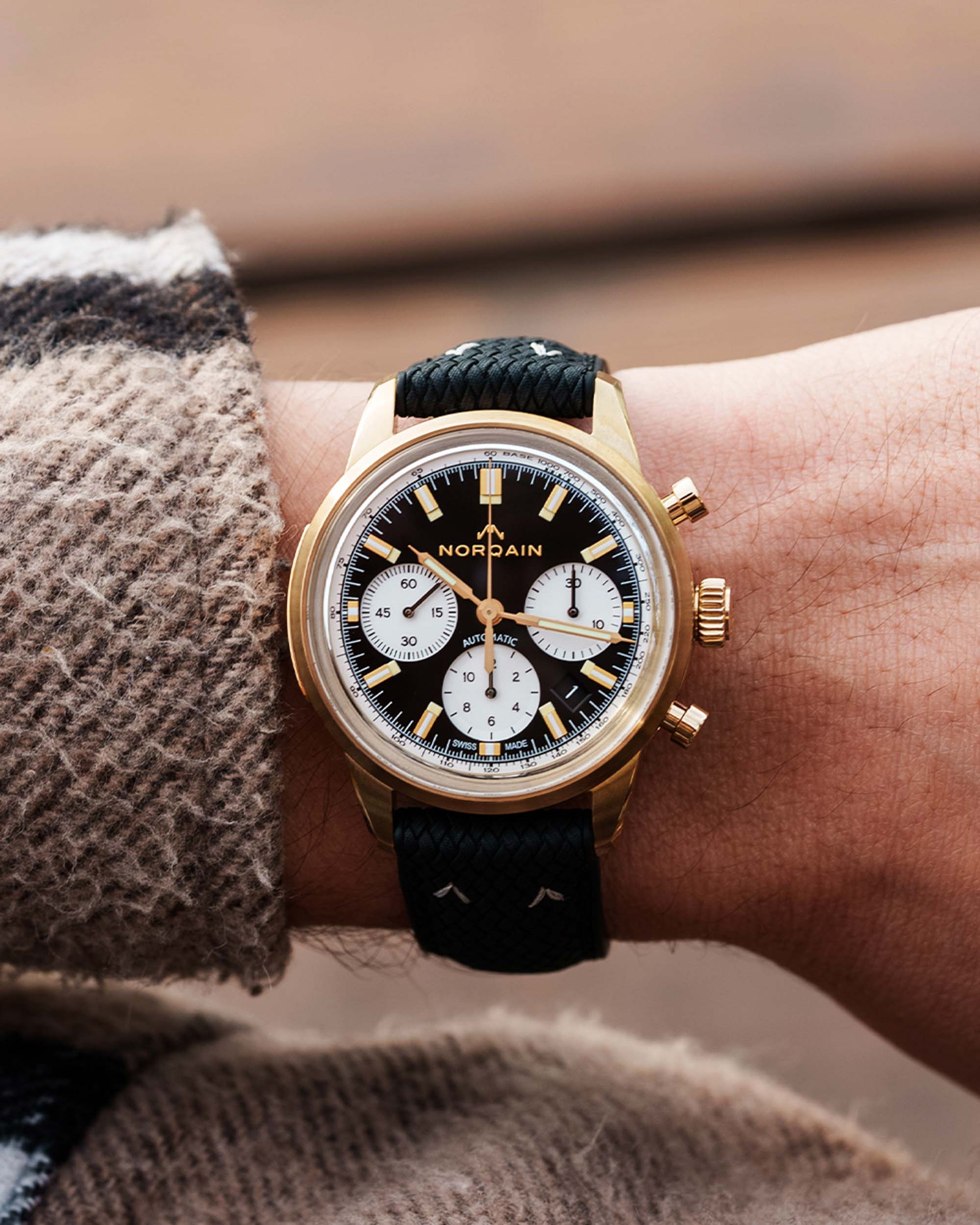 As is often the case with NORQAIN’s various bronze models, the new Freedom 60 Chrono 40mm Bronze will be produced as a limited edition, with a total of 200 examples available worldwide. Additionally, the new bronze model will be accompanied by an official retail price of $4,020 USD when purchased on one of the standard fabric or Alcantara straps, or $4,190 USD if buyers opt for the rubber and Perlon hybrid strap. When it comes to relative value, this new bronze edition is surprisingly only negligibly more expensive than its stainless steel counterparts, with the total price premium only representing an extra $100 over its siblings in otherwise identical configurations. In my opinion, this seems like a very reasonable surcharge for the exclusivity of a limited-edition bronze model, and given the popularity of both NORQAIN’s Freedom 60 Chrono series and bronze watches in general, I imagine that there will be a decent number of people interesting in adding this one to their personal collections. For more information, please visit the brand’s website.