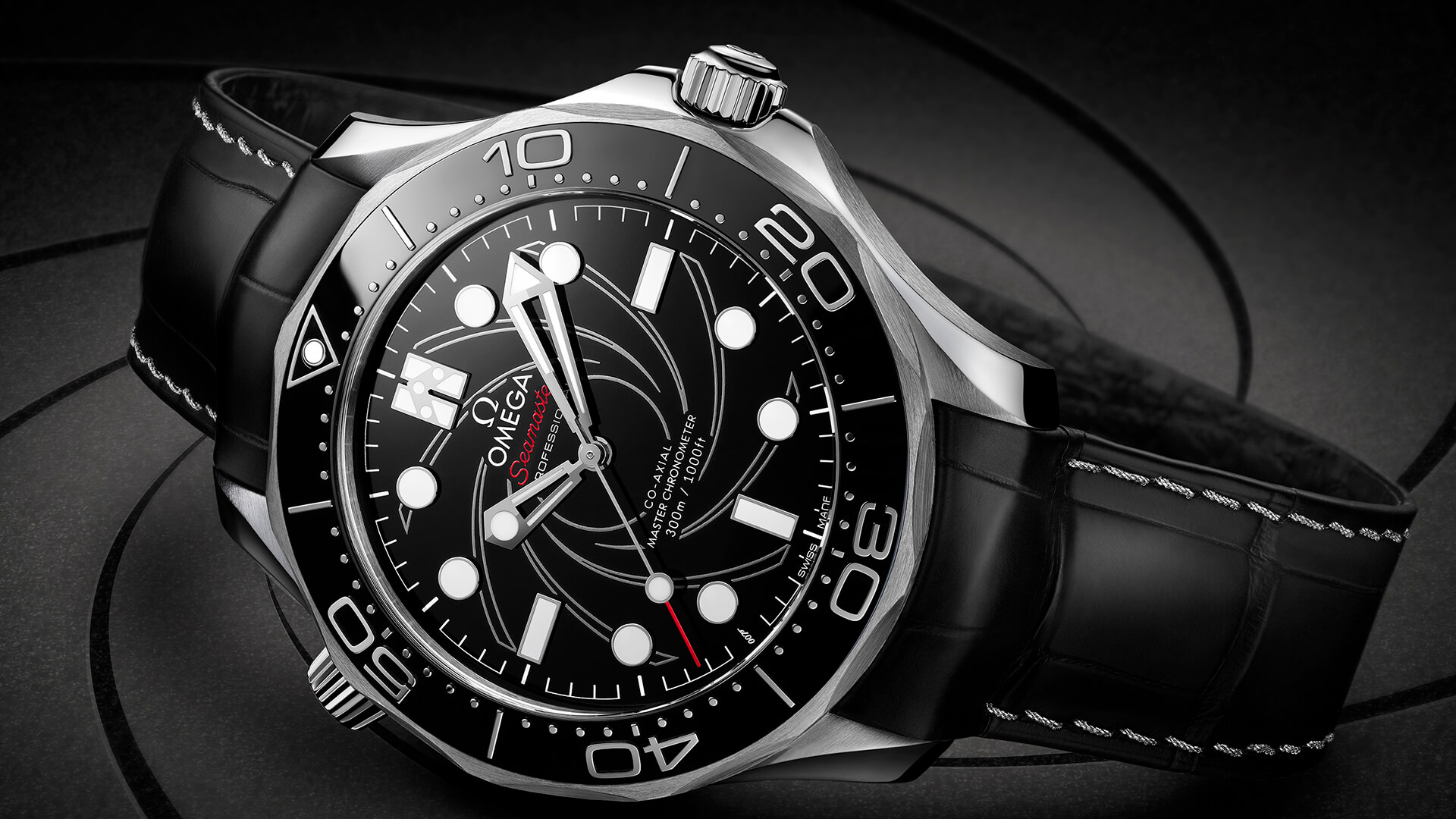 When it comes to dramatic and outlandish special edition models, few brands do it better than Omega. The Seamaster line in particular has seen a variety of spectacular special models in the last few years, especially those based on its long association with the James Bond films. The limited edition Seamaster 300M 007 James Bond On Her Majesty’s Secret Service, introduced in September of 2019, has been particularly prolific in this distinctive slice of the Omega lineup. Its distinctive rifled-barrel dial and subtle nods to Bond history have already spawned a whole series of spinoffs in yellow gold, as well as a seven piece solid platinum limited edition in the 2019 Nieman Marcus holiday catalog that also included a custom Aston Martin DBS Superleggera designed by Bond actor Daniel Craig. Needless to say, when Omega sets out to create a 007 inspired Seamaster, the results are often outrageous. For the brand’s next step, the new Omega Seamaster Diver 300M James Bond Numbered Edition in Platinum Gold adds a few suitably covert new references to the world’s most favorite spy while quietly including a revolutionary new case material. 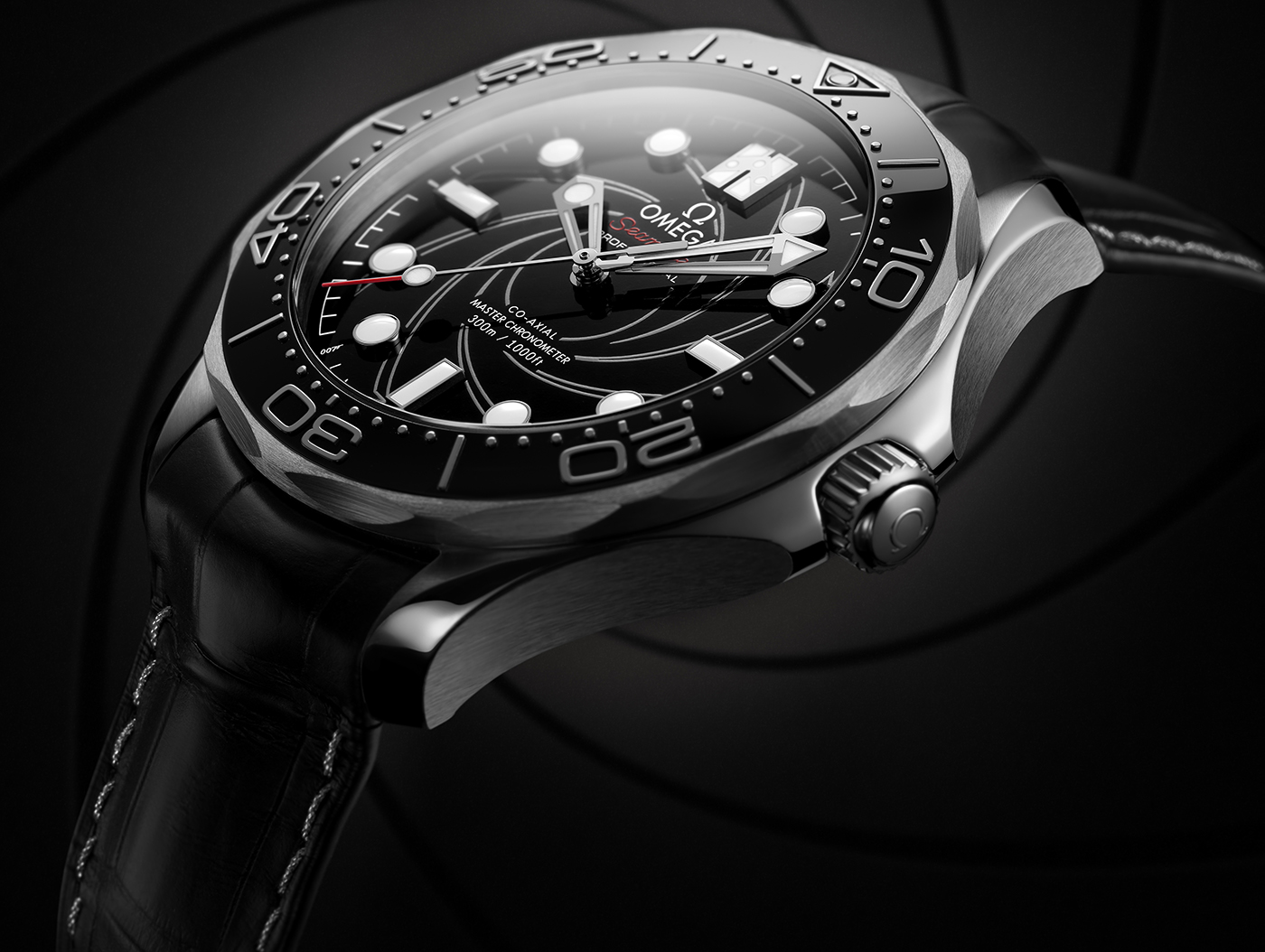 There’s not much that seems outwardly new about the 42mm case of the new James Bond Numbered Edition on first inspection, but below the surface there’s some cutting edge material science at play. Most precious metals, especially gold, are notoriously soft materials to work with. As a result, gold tends to scratch or dent far more easily than stainless steel, for example. Creating a hard wearing, durable sports watch out of the material has always been a bit of a paradox, with gold iterations of divers like the Seamaster series acting more as visible displays of wealth than as feats of engineering. For a bona fide globe-trotting action hero like James Bond, however, a soft and flashy metal simply isn’t up to the job. But if that same soft gold is added as an alloy to even more precious platinum, something unexpected happens. Platinum-gold alloys have the potential to be phenomenally strong and scratch resistant, with certain recently developed alloy combinations demonstrating scratch resistance and durability closer to diamond than most metals, 100 times tougher than high strength steel. While Omega has used this alloy in a handful of limited edition models recently, the brand itself has been remarkably quiet about the use of the metal. To our knowledge however, Omega is the first brand to use this sort of platinum-gold alloy in watchmaking, and a brand representative has confirmed that all future platinum Omega models will use this proprietary alloy. As for the look itself, it’s not too dissimilar from pure platinum, with a cool bright tone that sets itself apart from the slight warmth of white gold. Topping the familiar Seamaster 300M form is a glossy bezel insert in black ceramic, accented by a raised diving scale in pure platinum. An engraved plate in this same platinum-gold is individually numbered for each watch. The sapphire display caseback also receives a special engraved treatment, laser etched with the ornate Bond family coat of arms and inlaid with filament-thin platinum. Of course, like its more common stablemates the Omega Seamaster Diver 300M James Bond Numbered Edition in Platinum Gold is rated for 300 meters of water resistance. 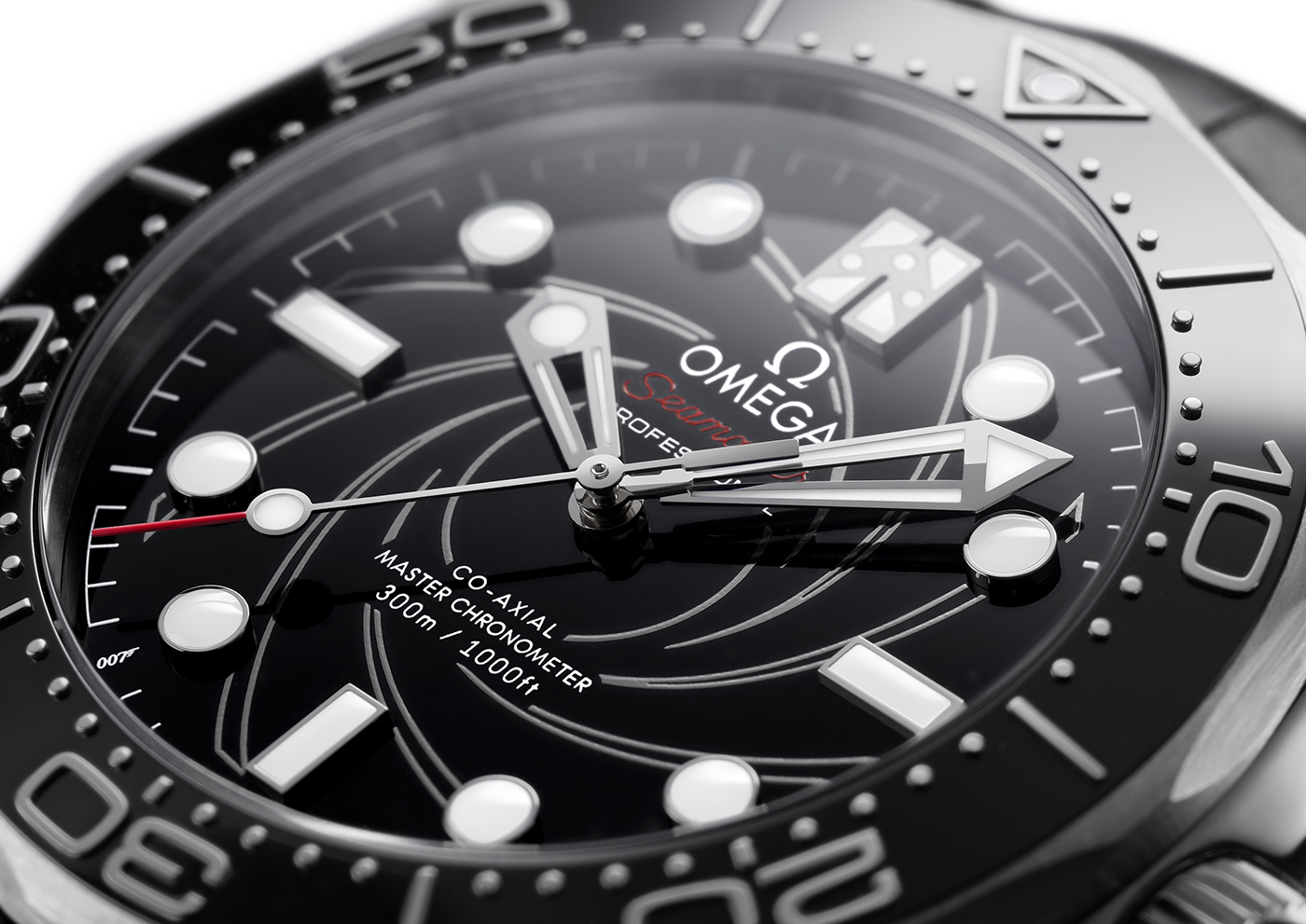 The dial of the Omega Omega Seamaster Diver 300M James Bond Numbered Edition in Platinum Gold largely follows the formula set down by last year’s On Her Majesty’s Secret Service limited edition, with a more luxe execution. Rather than brushed ceramic, the dial is glossy black enamel, and the dramatic spiraling 007 gun barrel design is inlaid with 18K white gold. This has been a divisive feature in past releases, with some enthusiasts claiming it feels too direct or obvious, but the attention to detail in this pattern is commendable in itself. For example, the circular aperture at the end of this spiraling design is exactly 9mm wide, the same caliber as so many of James Bond’s firearms over the years. The handset and applied indices are also rendered in white gold, with the distinctive 12 o’clock index adding the Bond family chevron and roundels to the classic design. The white enamel minutes track hides another small nod to the franchise, as the marker at 7 o’clock is replaced with a miniature 007 logo. The last special Bond inspired nod on the dial is only available in low light, as the 10 o’clock index features a number 50 hidden in its lume to honor the 50th anniversary of “On Her Majesty’s Secret Service.” 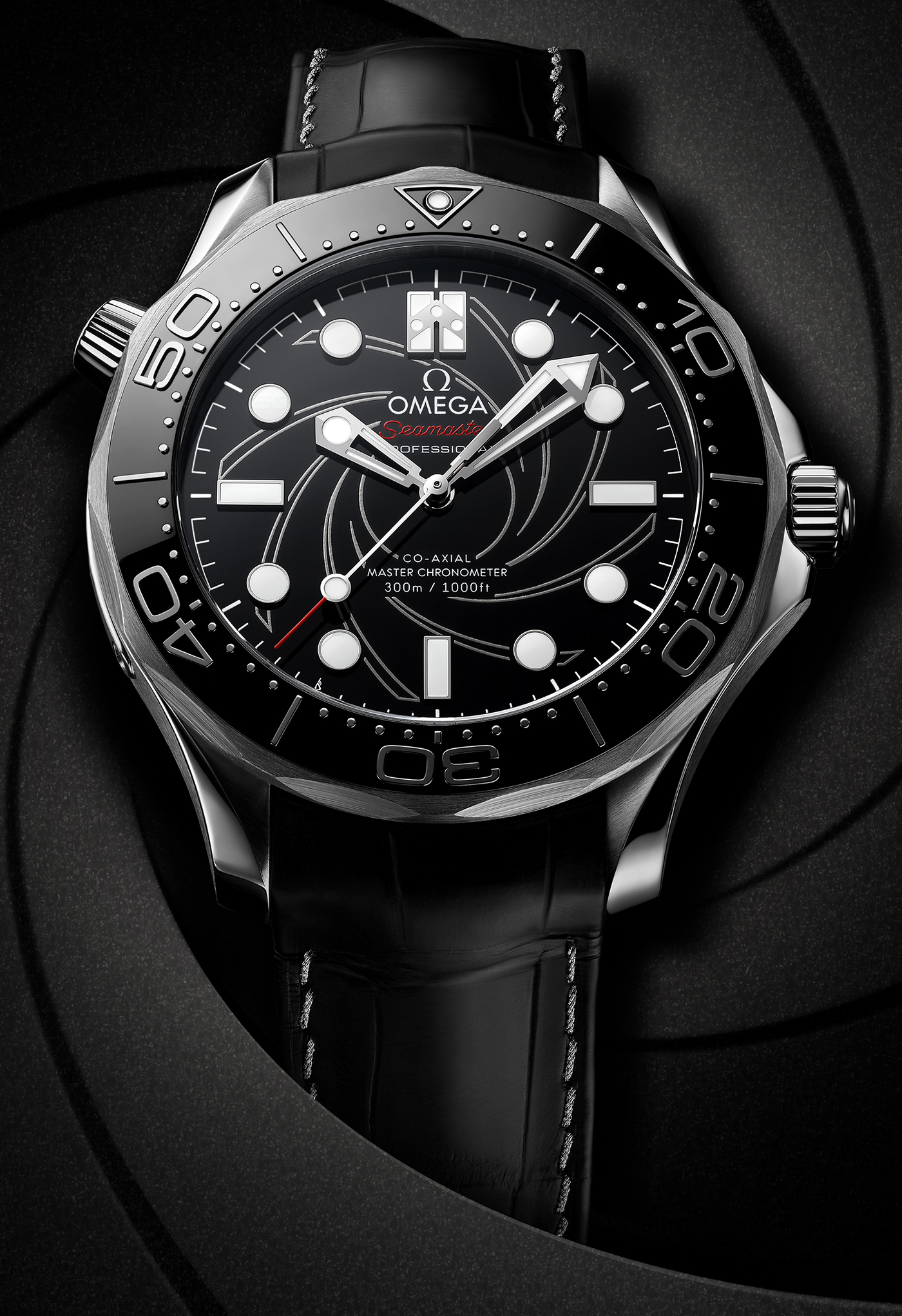 Omega powers the Seamaster Diver 300M James Bond Numbered Edition in Platinum Gold with the in-house 8807 co-axial automatic movement. Beyond the signature co-axial escapement, the 8807 also offers over 15,000 gauss of magnetic resistance and is extensively decorated with Omega’s distinctive spiraling stripe pattern and a signed rotor in its proprietary Sedna gold alloy. Certified to master chronometer accuracy standards by METAS, the 8807 provides a dependable 55 hour power reserve at a 25,200 bph beat rate. The brand adds one final luxe touch to this model with its strap offerings. The black crocodile pattern leather strap not only seamlessly conforms with the case, the contrast stitching is executed in fine platinum thread. For a less ostentatious option, Omega also includes a strap in black rubber. 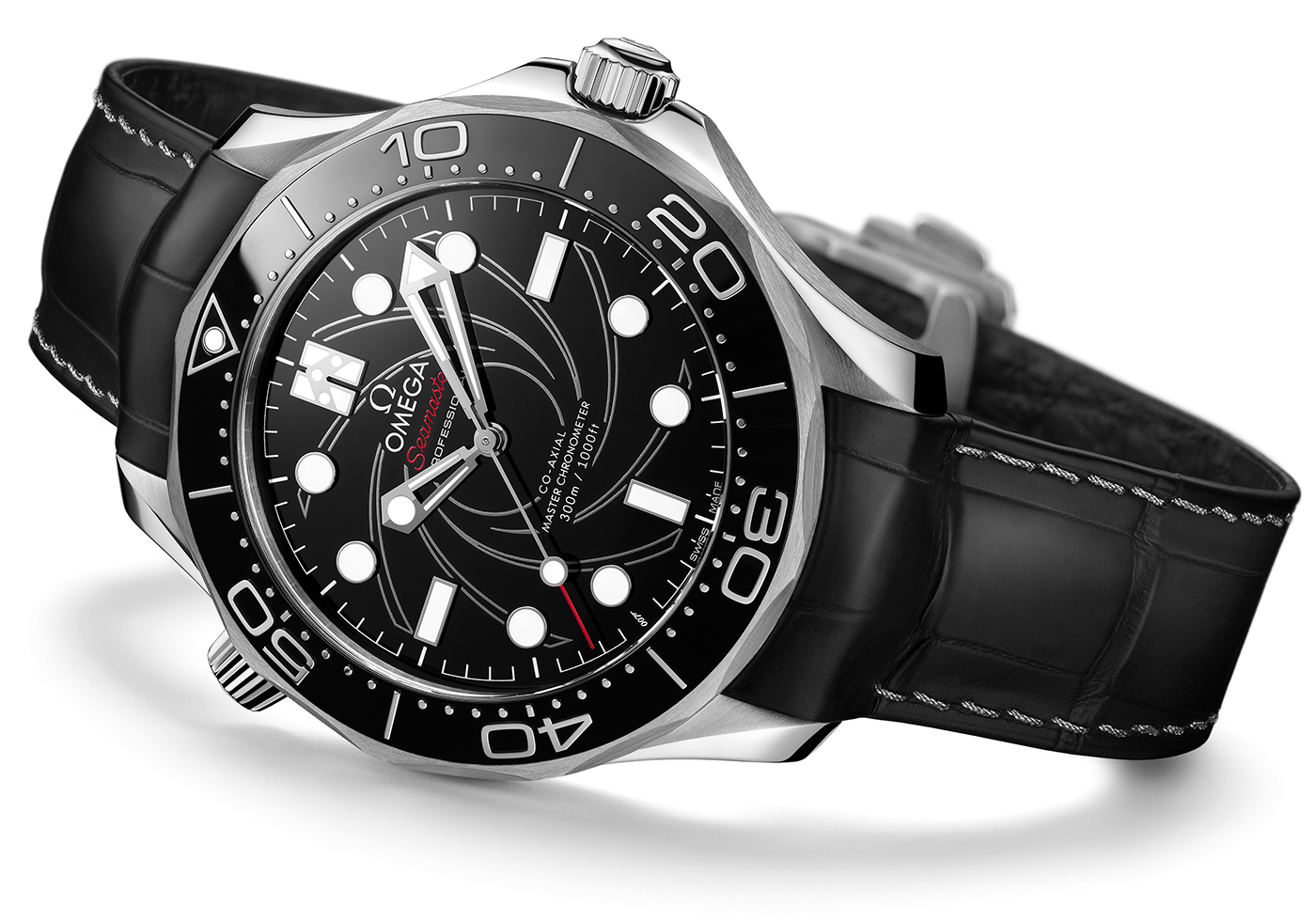