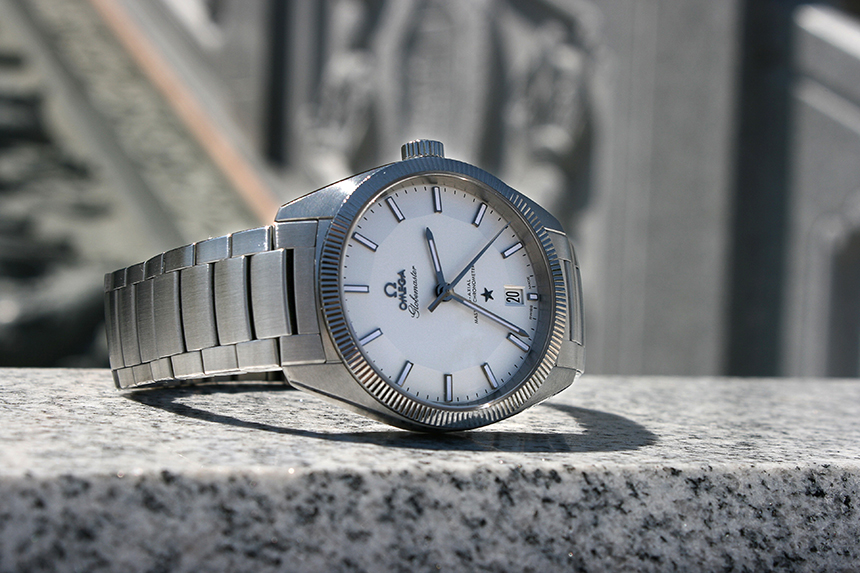 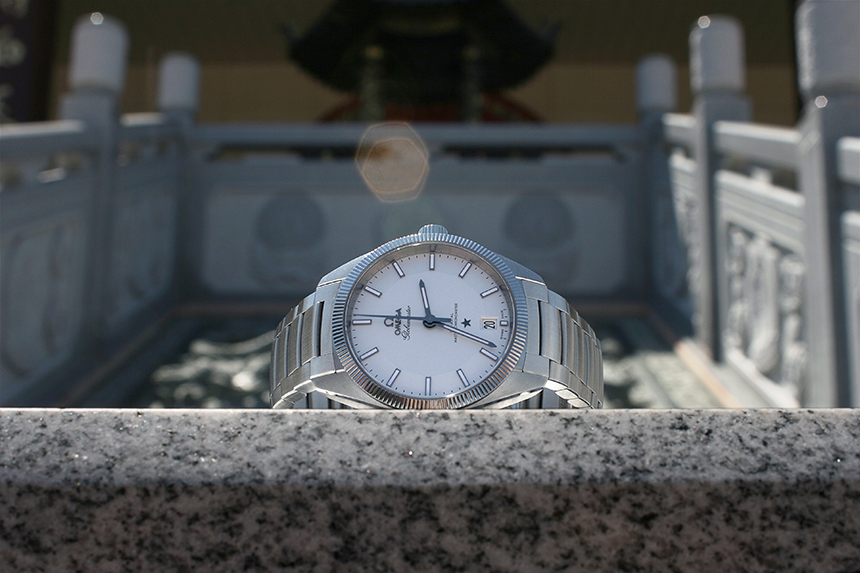 David Bredan says: We are yet to discuss one of the more important and interesting features of the Omega Globemaster collection: its groundbreaking Master Co-Axial movement that in fact was debuted in the Globemaster family of watches and is slowly making its way into other Omega collections. Called the Caliber 8900, this automatic movement is an evolution of the 8500 movement that the brand industrialized in 2014. 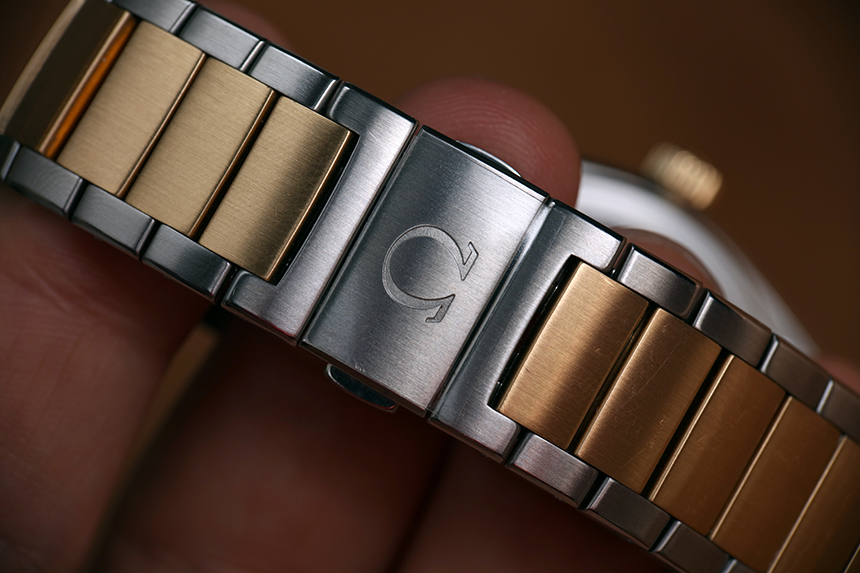 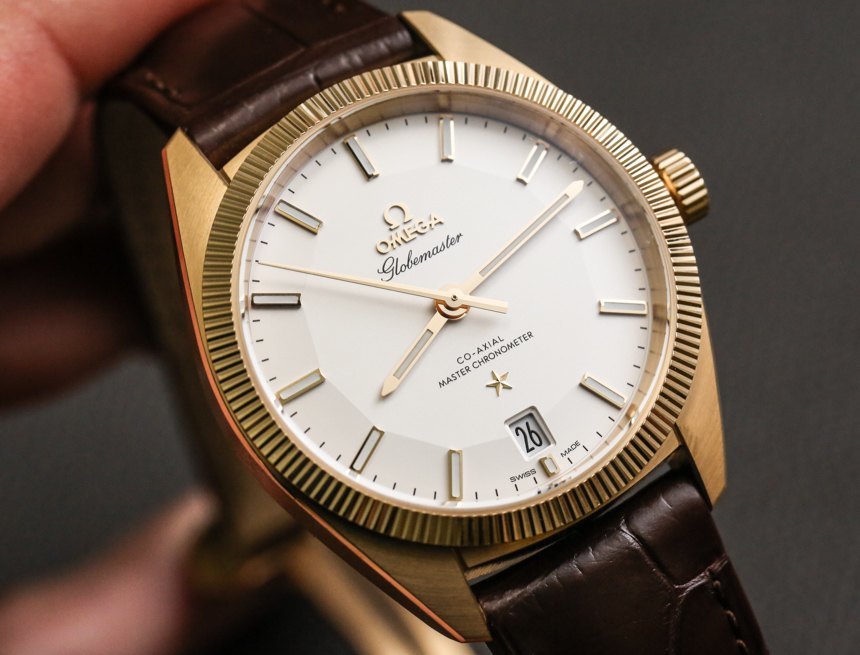 The term “Master Co-Axial” (and sometimes Co-Axial Master Chronometer, as occasionally Omega uses both to describe the same thing) refers to Omega’s newly developed, METAS-certified anti-magnetic chronometer-tested movements. That sure is a mouthful, but in a nutshell what you need to know is that all Omega Globemaster watches are equipped with movements that have passed both COSC chronometer tests (hence receiving an official chronometer certificate) and also Omega’s more stringent and thorough in-house tests, procedures that have been authorized by and are closely audited by METAS, the Swiss Federal Institute of Metrology. 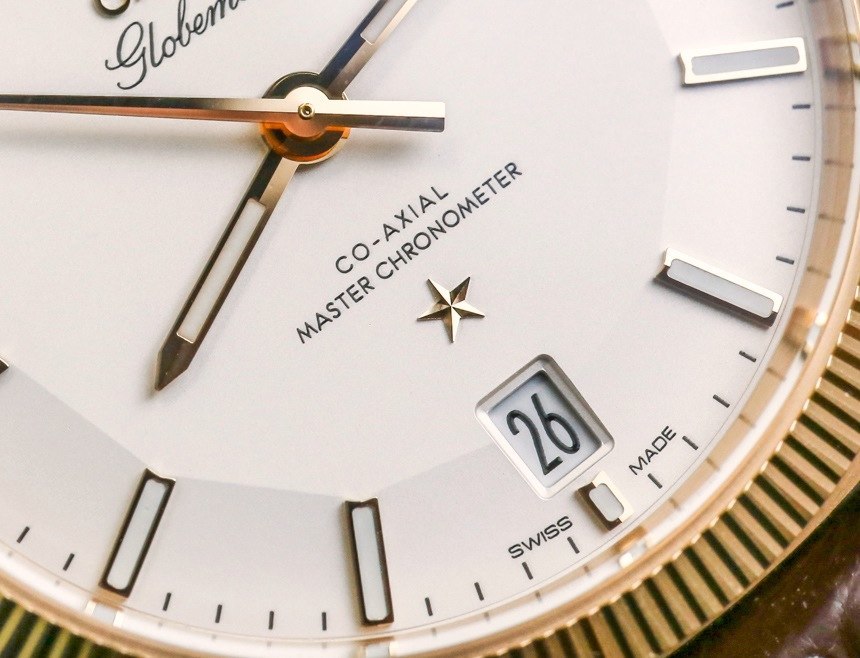 METAS-certified watches (mind you, METAS certifies the in-house testing process that watches pass and not the individual timepieces) are subjected to eight different tests which test the accuracy of both uncased and cased movements both before and after exposure to 15,000-gauss-strong magnetic fields, claimed water resistance, power reserve, rate deviation between 100% and 33% of power reserve, deviation of rate in six positions, and the average daily precision of the watch.

In essence, with any and all Omega watches that feature a Co-Axial Master Chronometer movement, you get both a movement and a watch that has passed these stringent in-house tests at Omega. 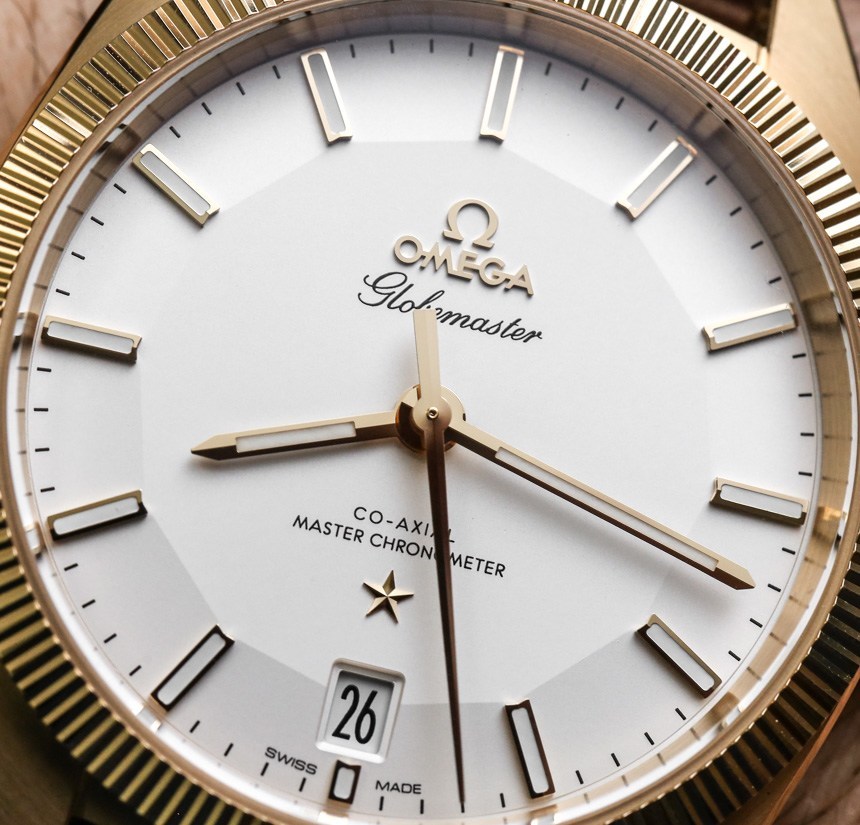 As a nod to some of its vintage Constellation pieces, Omega designed a new case-back for the Globemaster, displaying a medallion in its center, stamped with an image of an observatory, representing the precision awards that the brand received during the “famous” chronometer observatory trials. While it will mostly be more hardcore watchnerds who will be familiar with observatory trials, the case-back nicely complements the dial and case design. Oh, and if obscure details are your thing, we’ll say that the eight stars above the observatory represent both the eight most important precision records that Omega set and also the eight METAS-certified criteria that the watch (and its movement) have passed. 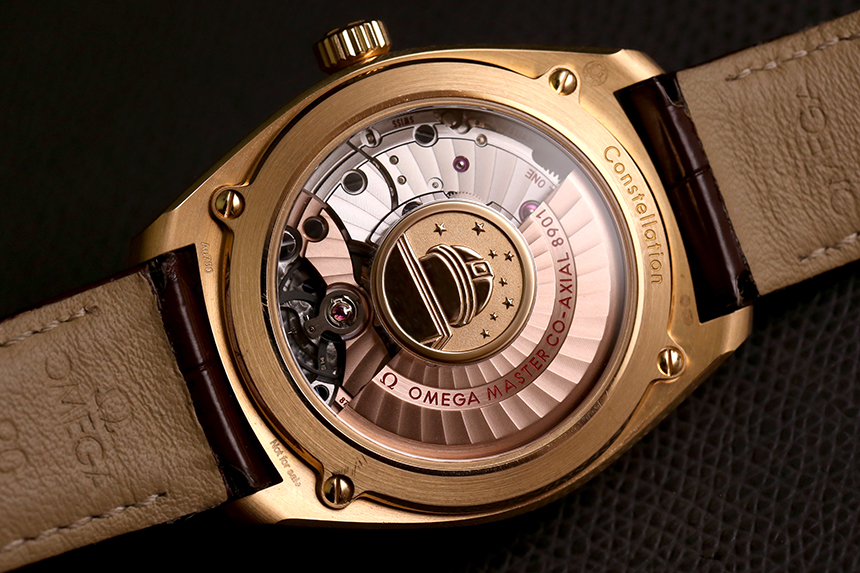 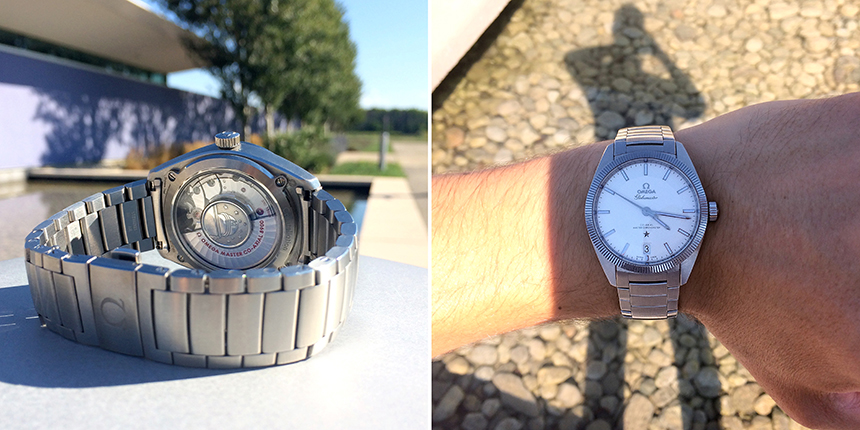 The self-winding 8900 features a nicely decorated automatic rotor (in gold on the 8901 movement version fitted to the gold- or platinum-cased Globemaster), offers a 60-hour power reserve, and runs at the more unusual rate of 25,200 beats per hour. 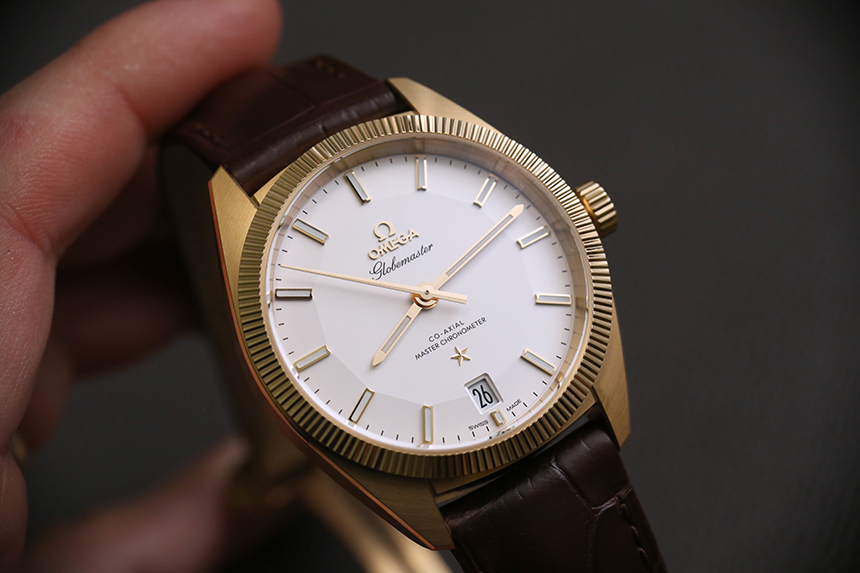 Bilal Khan says:  Matt, Ariel, and David have done a pretty great job discussing the Omega Globemaster, so I’ll talk about my experience wearing the watch and fill the readers in on anything more I feel they should know. The model I wore broke the mold of watches I am usually drawn to in several ways. First off, at 39mm wide the Omega Globemaster is smaller than the 42mm that I’m usually looking for as a minimum size, but the well-proportioned lug-to-lug width provides a substantial enough look on the wrist. 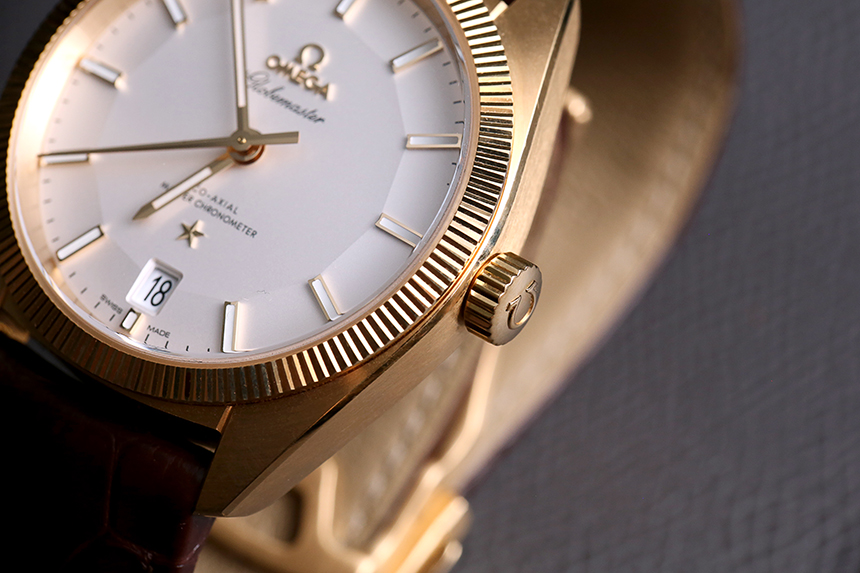 Secondly, I almost always prefer a bracelet to a leather (or NATO) strap, but I was immediately and strongly drawn to what I later realized may be the most “old-fashioned” Omega Globemaster available, the version in yellow gold on a brown alligator strap. There is something about the contemporary proportions, impressive METAS certified 8900 movement, and self-assured design of the somewhat stuffy yet inarguably dapper yellow gold and leather that when experienced in combination resulted in a watch I couldn’t take off for weeks. 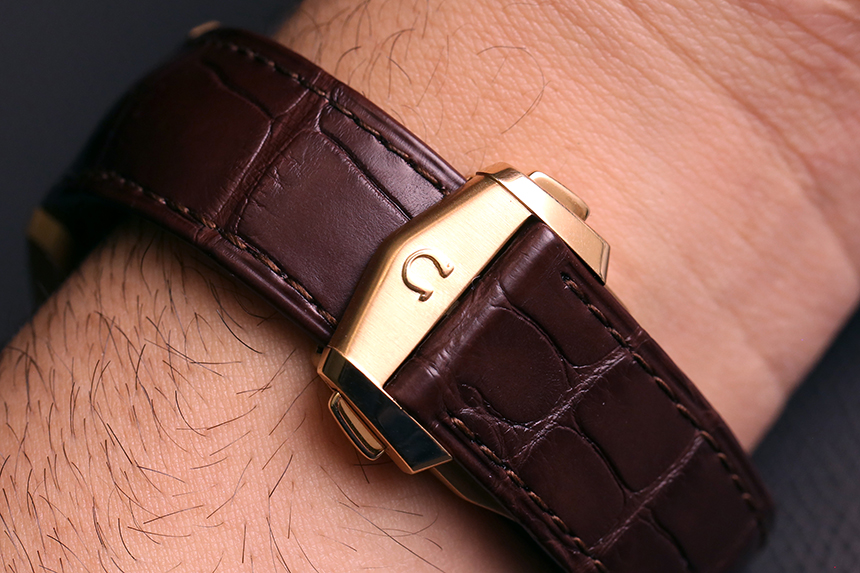 David expounded on the benefits of the METAS certified movement enough, and I am going to basically agree with what Ariel said about the movement and its impressive anti-magnetic qualities. I’m going to bet that many, if not most, mechanical watch enthusiasts have had their fair share of unpleasant experiences with a watch running fast due to magnetization. There’s nothing flashy or sexy about it, but knowing the Omega Globemaster is resistant to 15,000 gauss should give you enough peace of mind that an accidental brush with some random source of magnetism (they’re everywhere!) doesn’t give you a headache. 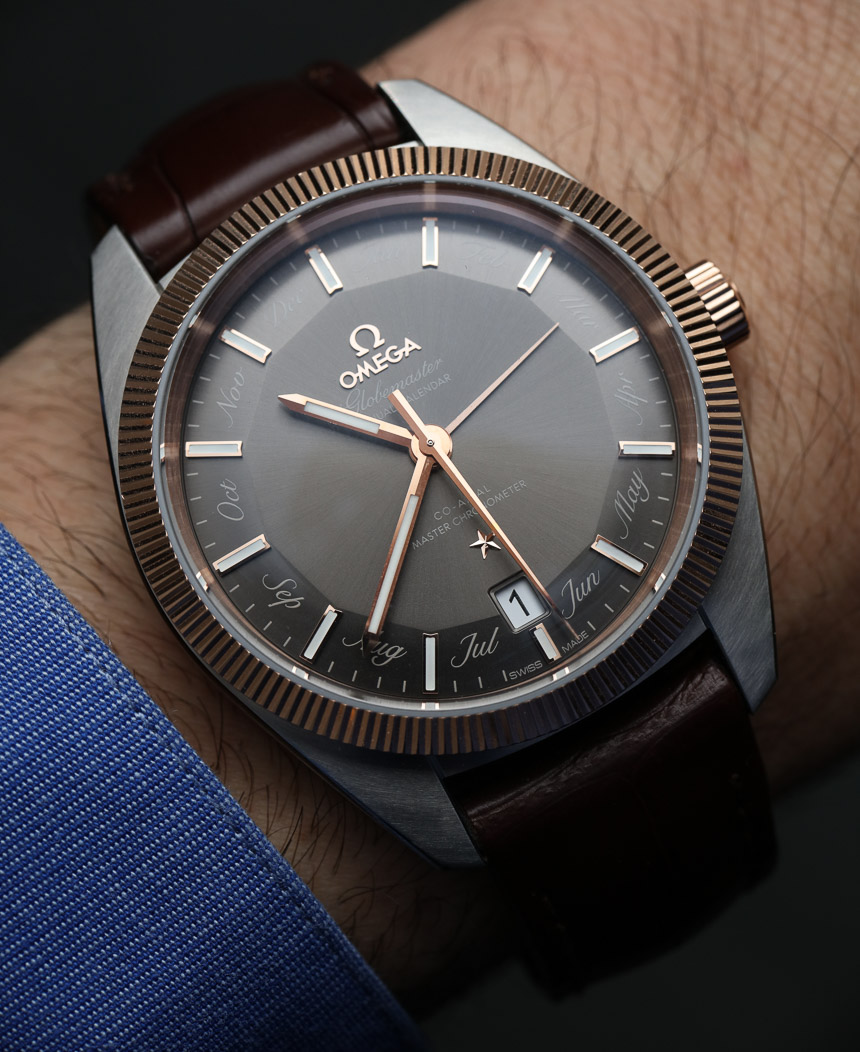 I did want to mention that there is also an Annual Calendar model which I didn’t get to wear for any significant duration of time, but did get to try on and play with for a little bit. With styling that may not be for everyone, the Omega Globemaster Annual Calendar watch (hands-on here) does come in at 41mm wide, so if you’re looking for a little more heft on the wrist, that will do it. 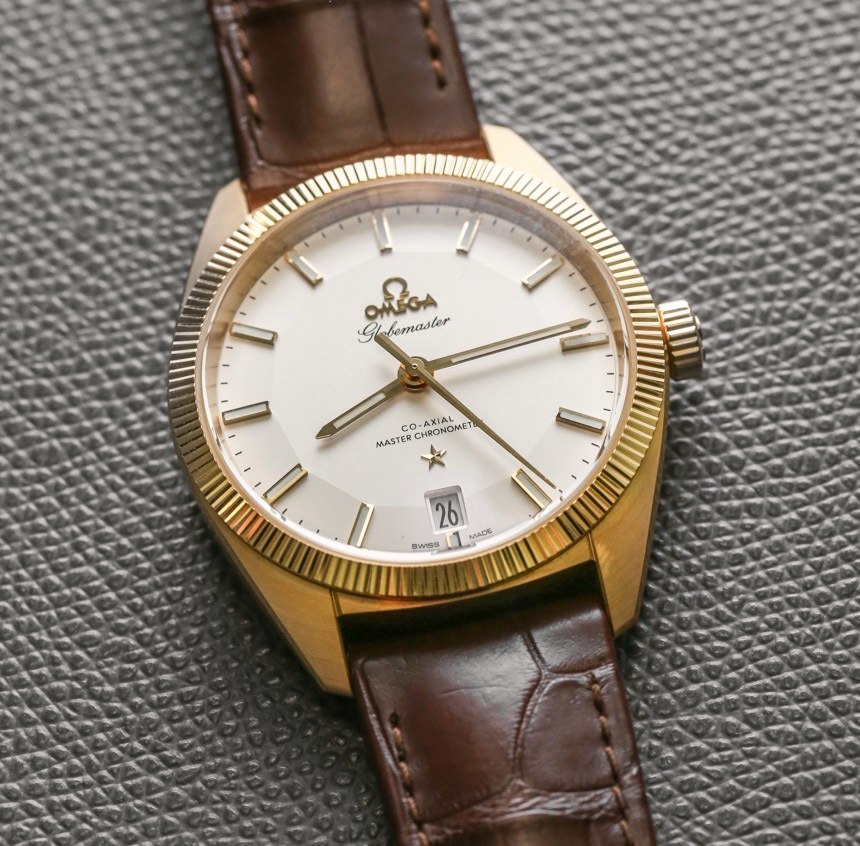 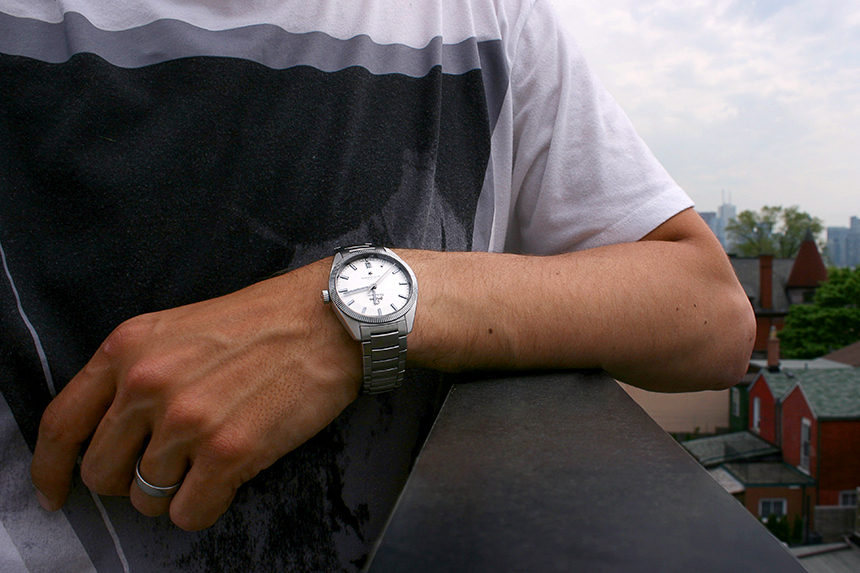 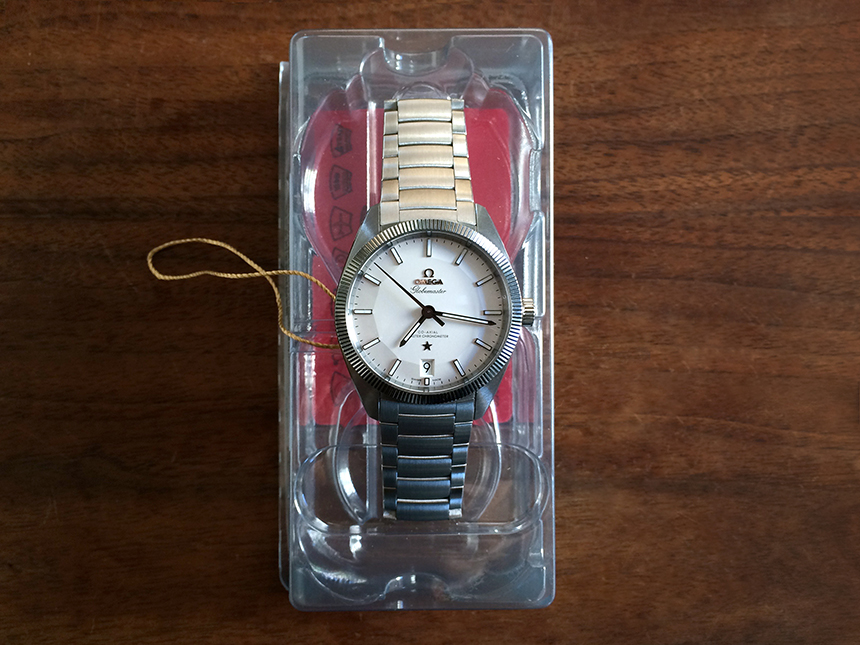 Matt Smith-Johnson says: Minor infractions aside, I spent a whole lot of time wearing the Omega Globemaster, and I was definitely sad to see it go. It took up a whole lot of wrist time, and I found that it was surprisingly versatile. I tried on the leather strap version as well and although I really loved that folding clasp and alligator band, it would probably make the watch harder to dress down, and I perhaps wouldn’t have worn it as often as I did on the bracelet.

Either way, this watch really made me feel a bit special when I strapped it on my wrist, and again when I took it off to admire the movement. The details are really something, and I’m not writing off the Omega Globemaster as a future contender for a portion of my paycheque. It’s a solid watch that pays homage to an icon in a clever way, and I think it’s a solid addition to the Omega catalogue. omegawatches.com

Necessary Data
>Brand: Omega
>Model: Globemaster
>Price: $7,700; $12,000; and $21,600 as tested
>Size: 39mm x 12.5mm
>Would reviewer personally wear it: Yes.
>Friend we’d recommend it to first: Anyone who is a serious Omega watchnerd, or someone who is seeking a well-rounded luxury timepiece.
>Best characteristic of watch: That backside. Just look at it.
>Worst characteristic of watch: The uneven gap between the end link and first link as compared to the rest of the bracelet.