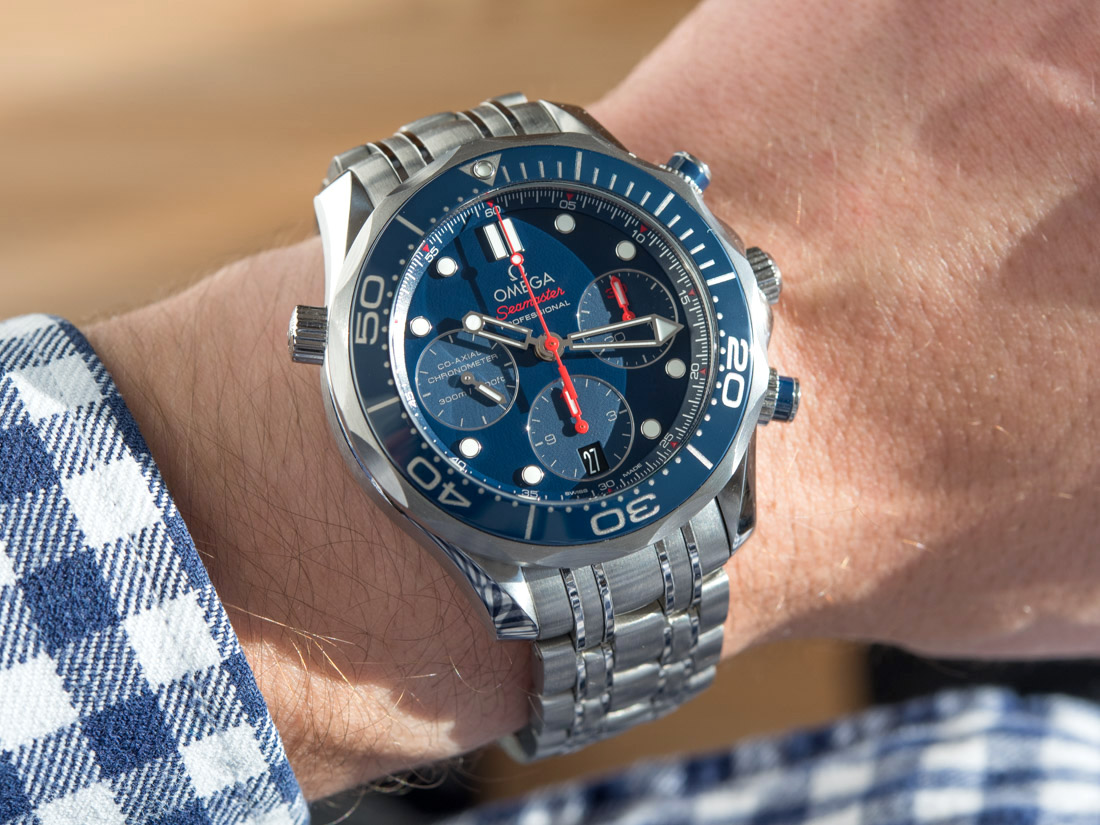 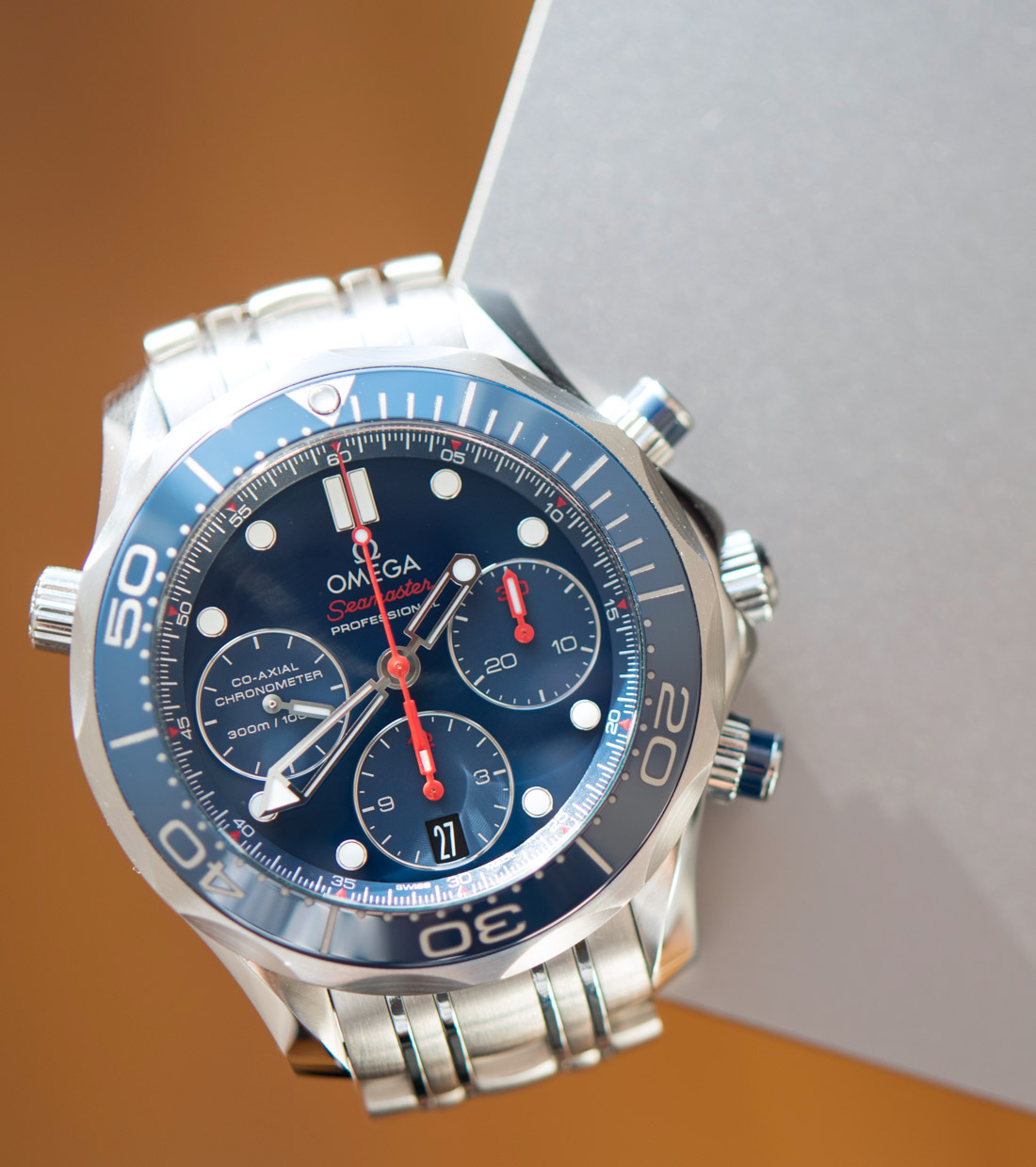 I’ll go one step further and say that wearing this Seamaster 300M Chronograph has been a refreshing experience not just because I’m inundated with unnecessarily large watches, but because I have seen something that I’ll never be able to unsee. That would be how the majority of larger watches in recent years add extra girth to their dials and cases around a totally unchanged movement. This results in watches that appear to have been inflated (helium escape valve malfunction?) or as though a large watch ate a small movement. Large watches with bespoke movements and/or other high-tech elements I’m at times OK with, but unnecessarily fat watches should always have a smaller, more proportionate alternative in their respective collections. 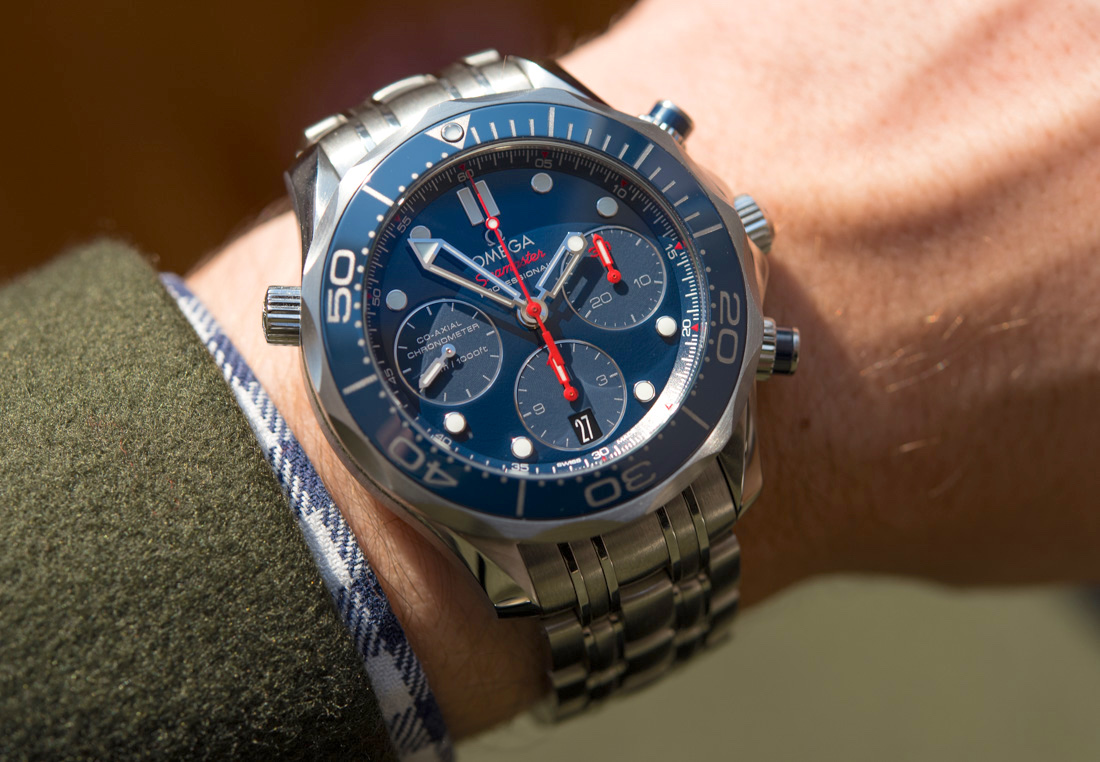 By contrast, seen in the metal this 300M looks right in a way few watches do today. It looks like Usain Bolt at a body builders’ convention or Alicia Vikander next to the Kardashians. Mighty strong and powerful, but without all the appalling excess. Don’t get me wrong, as I’ve said further above, this Seamaster 300M is still over the top in a number of ways, when you compare it to an ordinary, basic watch – just like those two previous people are next to ordinary, everyday people. 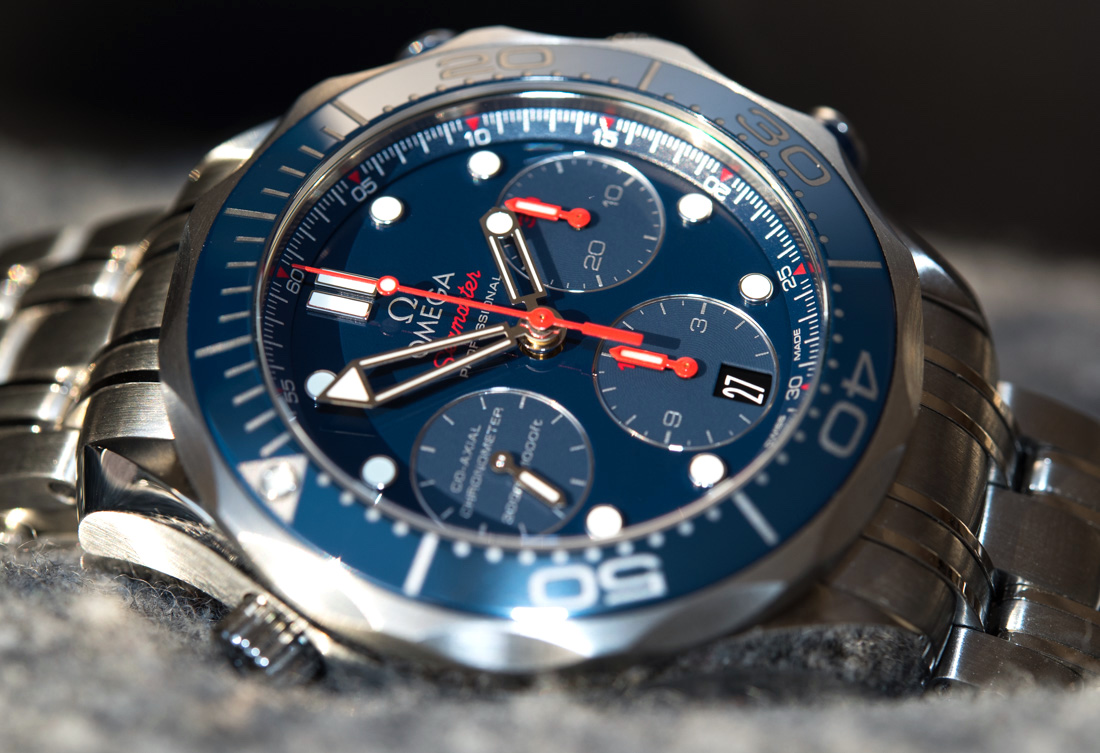 Still, many watches these days I see appear to have been designed (and chosen by customers) to go with much of the developed world’s anomalistic fascination with bigger somehow equalling better in the things we own – we live in the age of artificially enlarged women’s bottoms, the horrid Mercedes-Benz GLS, and 45-46mm wide watches often offered without a smaller counterpart… And by these standards this 41.5mm wide, classic Seamaster looks laid back and restrained. 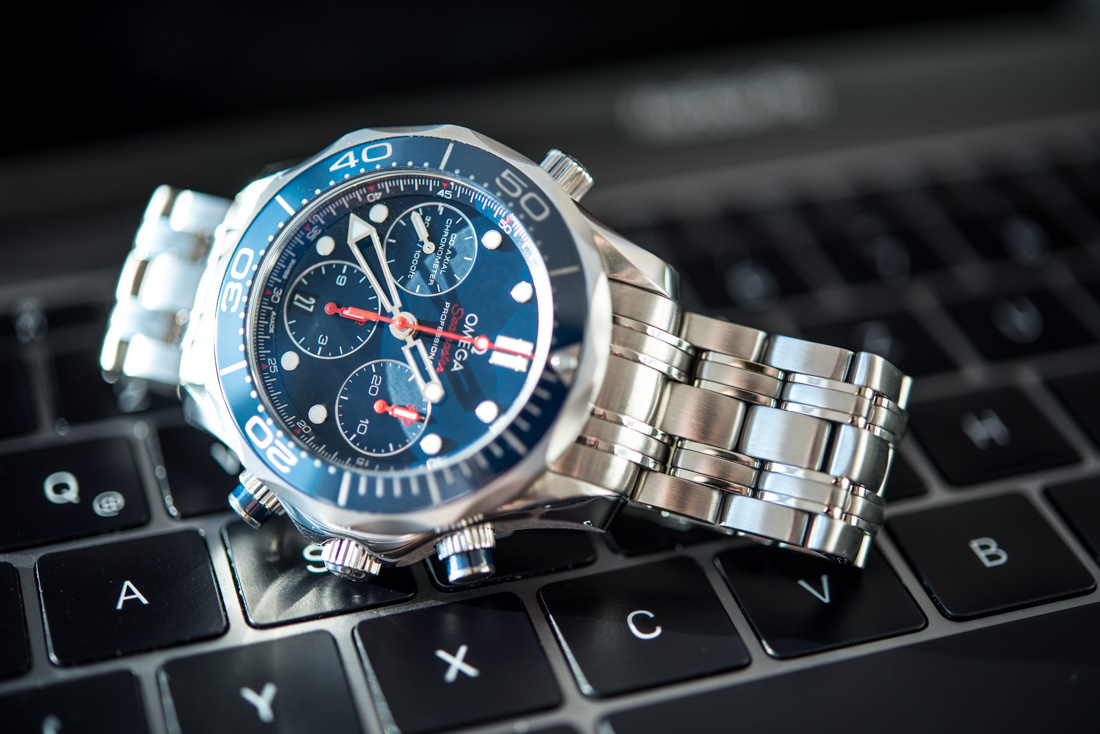 On a personal note, and I know some might disagree, I think it’s about time things get scaled back a little – and no, I’m not writing this in a hippy-replete Starbucks or aboard a VW minivan, and I’m not a big-city douche who thinks 36mm is the pinnacle in hipdom and refined watch taste (no offense to non-douchy big-city dwellers). All I’m saying is that there is something refreshing to having an item that was designed at a time and age when this was the order of priorities: 1) functionality, 2) comfort, 3) looks, 4) bloating – and not the other way around. At 41.5mm wide, the Seamaster 300M Chronograph appears to fit that preferable order of things… Mind you, this is not to say it is free from arbitrary design elements and bloating – but few luxury watches are and those often are timid and boring. 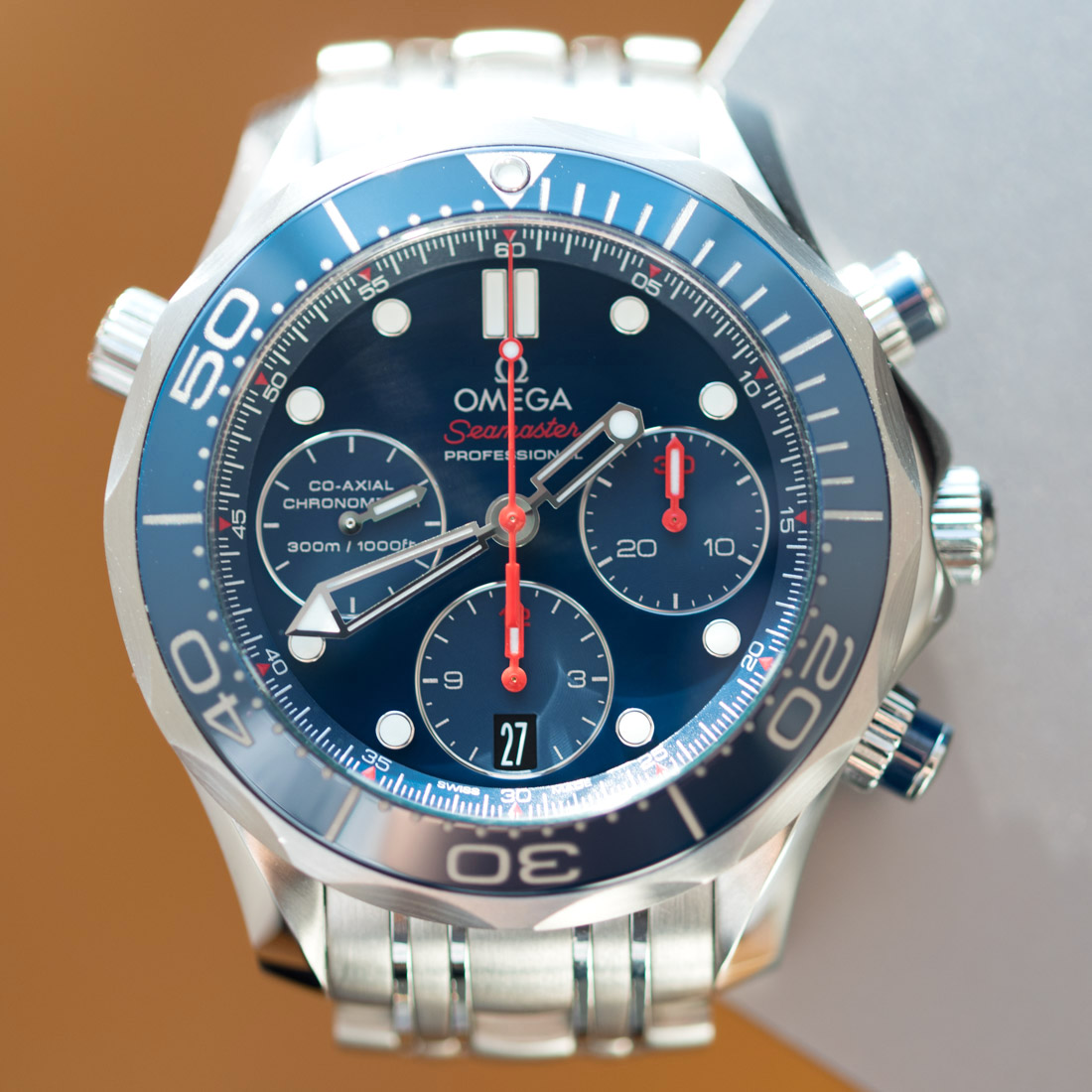 The main difference between this reference 212.30.44.50.03.001 and its 44mm counterpart in the Seamaster 300M collection is in proportions. The 44mm is still a great looking watch, but the 41.5 somehow feels tighter, sturdier, and more balanced than its artificially inflated brother. The Omega Seamaster 300M Co-Axial Chronograph 41.5mm is one thick watch, but what you notice more than its thickness is its weight. Even with a few links removed, it is one genuinely hefty watch, the sort you definitely wouldn’t want to be hit in the head with – or, for a more realistic analogy, drop on your feet when putting it on. 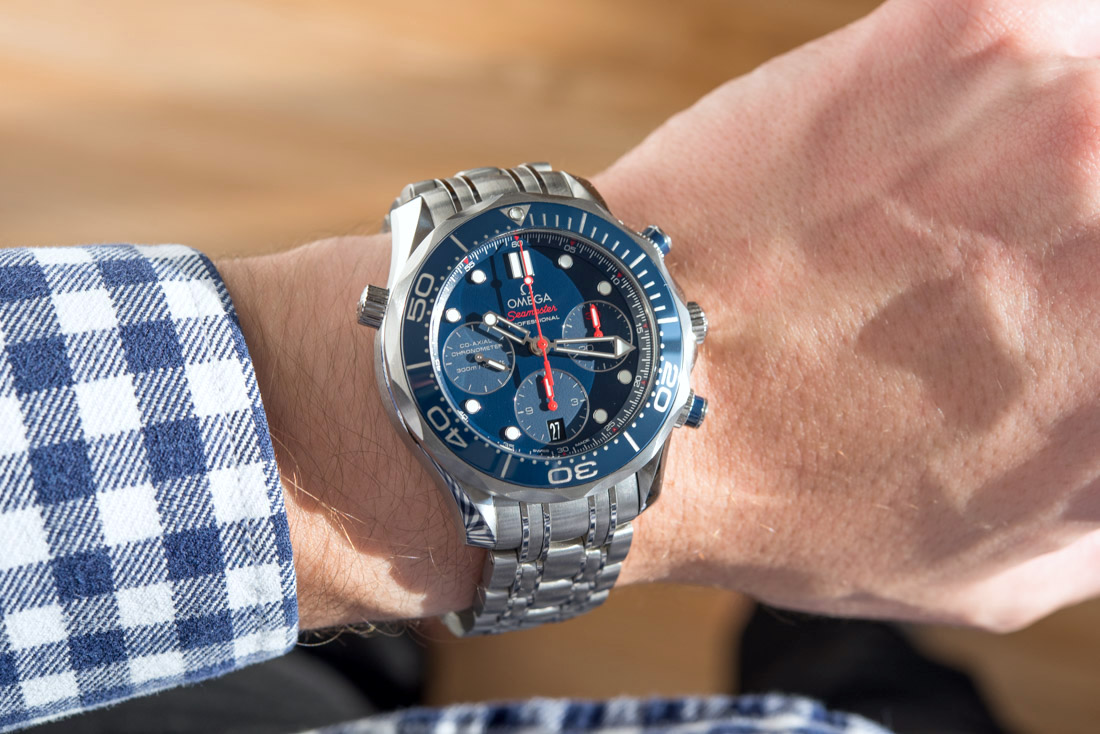 Weight neatly leads us to wearability. The key thing here that I found is getting the length of the bracelet right – I mean exactly right. If you like wearing your watches loose, this probably isn’t the watch for you because its sheer weight will pull it forcefully down and have it bang up against the top of your hand. What you’ll want is a relatively precise fit, so the watch stays level on your wrist and does not flop about. It is a relatively thick and heavy watch head that does indeed tend to jiggle about on the wrist. The bracelet does have small enough half-size links to allow for precise fine-tuning, and once you got it right, it feels solid and comfortable on the wrist. 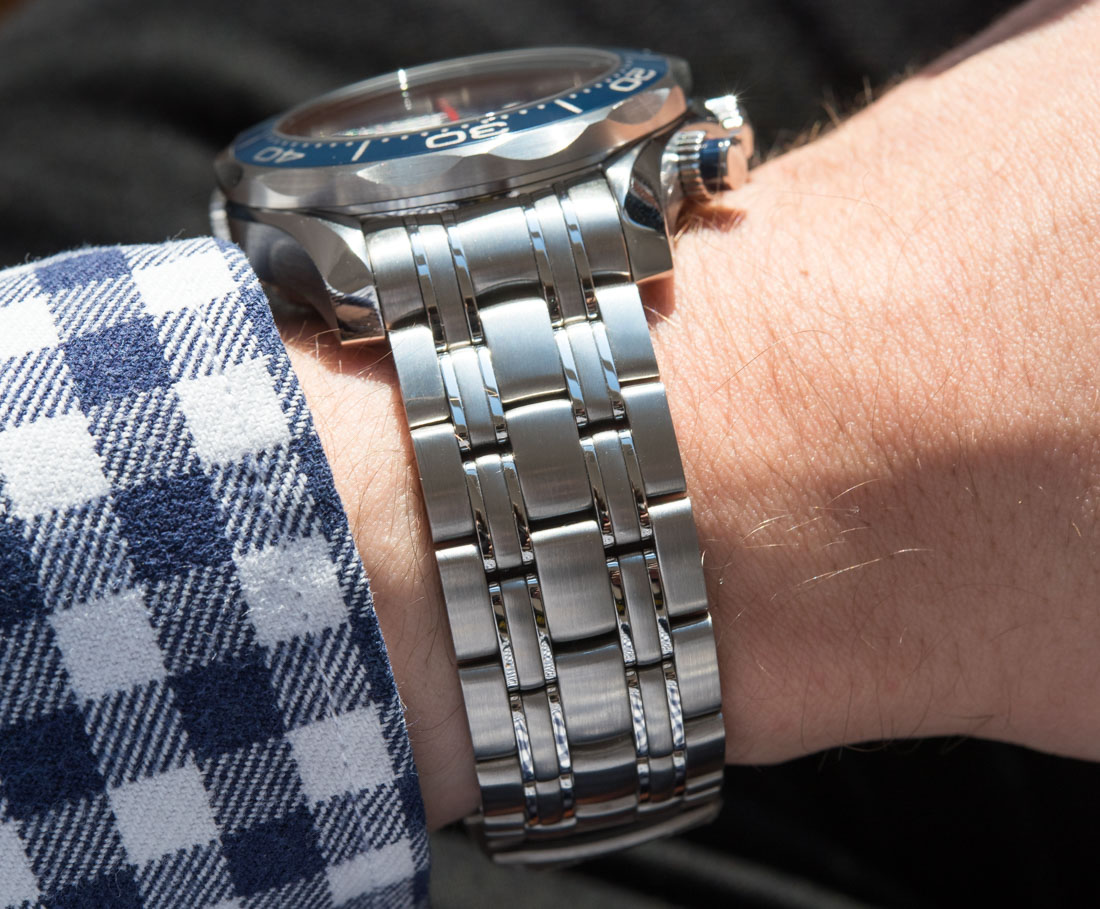 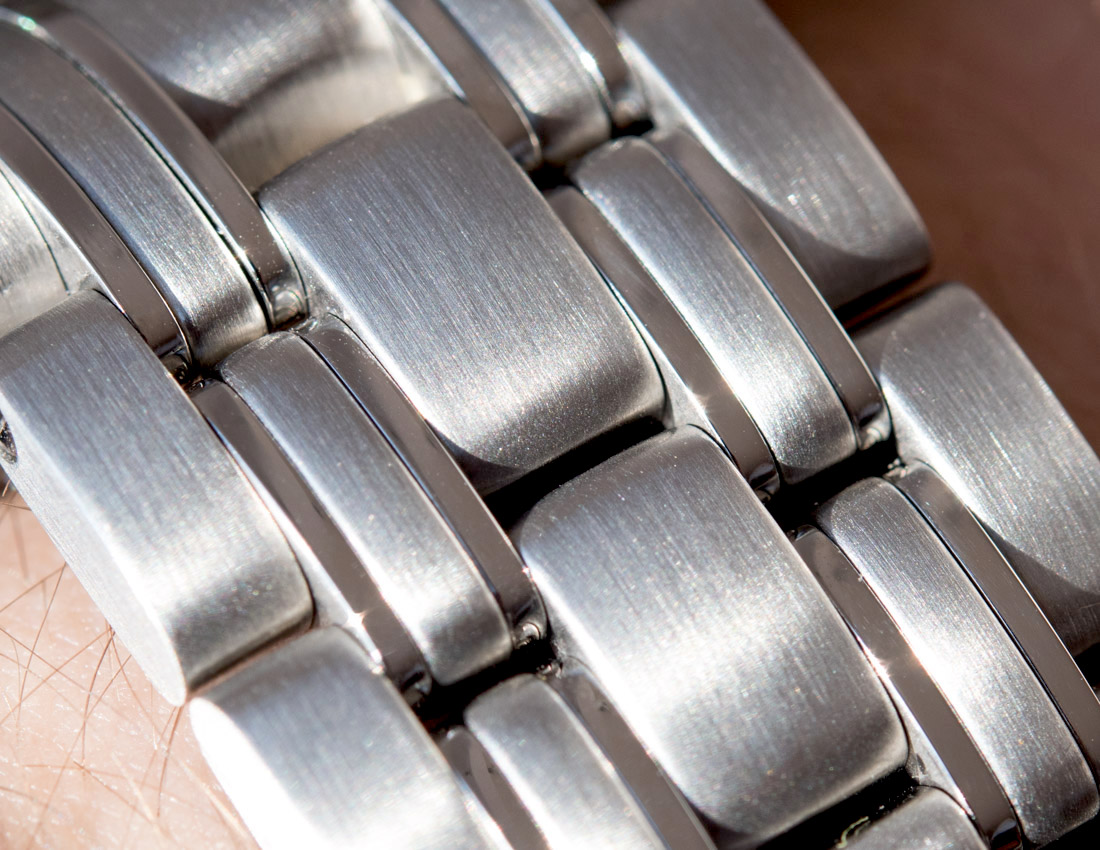 Speaking of the bracelet, it is basically a 9-link design, with polished bits breaking up the range of satin finished components. The bracelet does not taper and it is, come to think of it, one of those very few non-tapered bracelets that I like the looks of. Bracelets with parallel sides I usually find look unnecessarily bulky and blocky, but here it somehow works great against the smaller case. The inside of the links is pleasantly smooth, perhaps the very edge of the bracelet is a little bit sharper than I’d prefer. 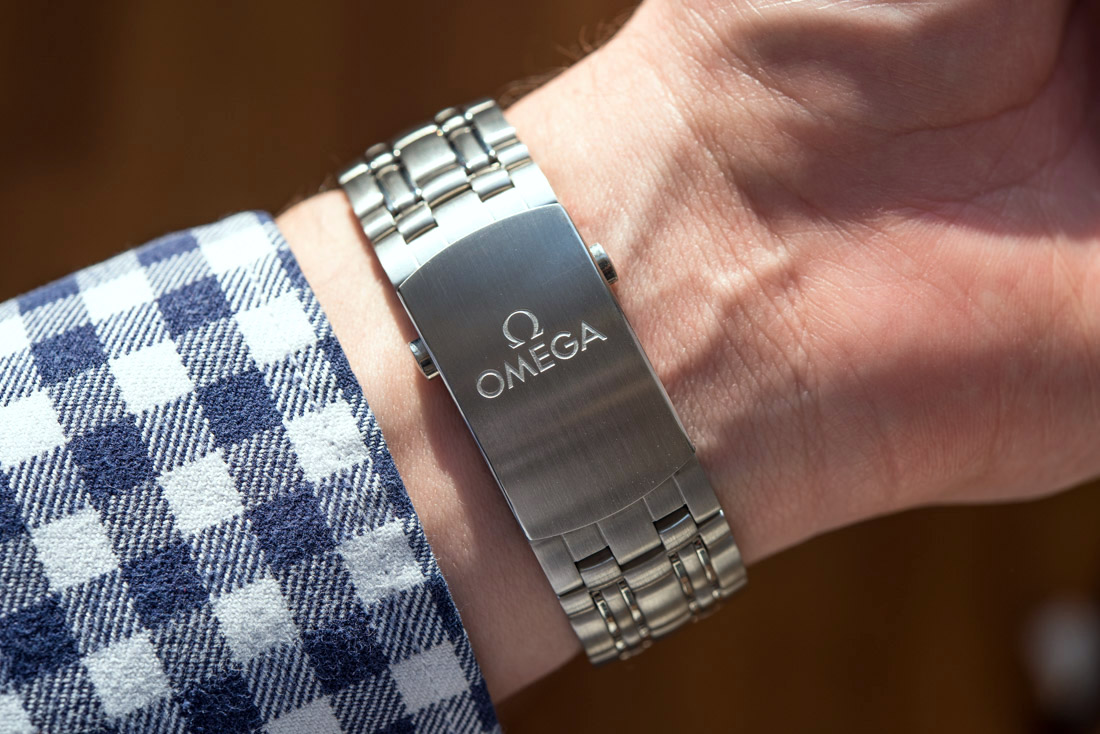 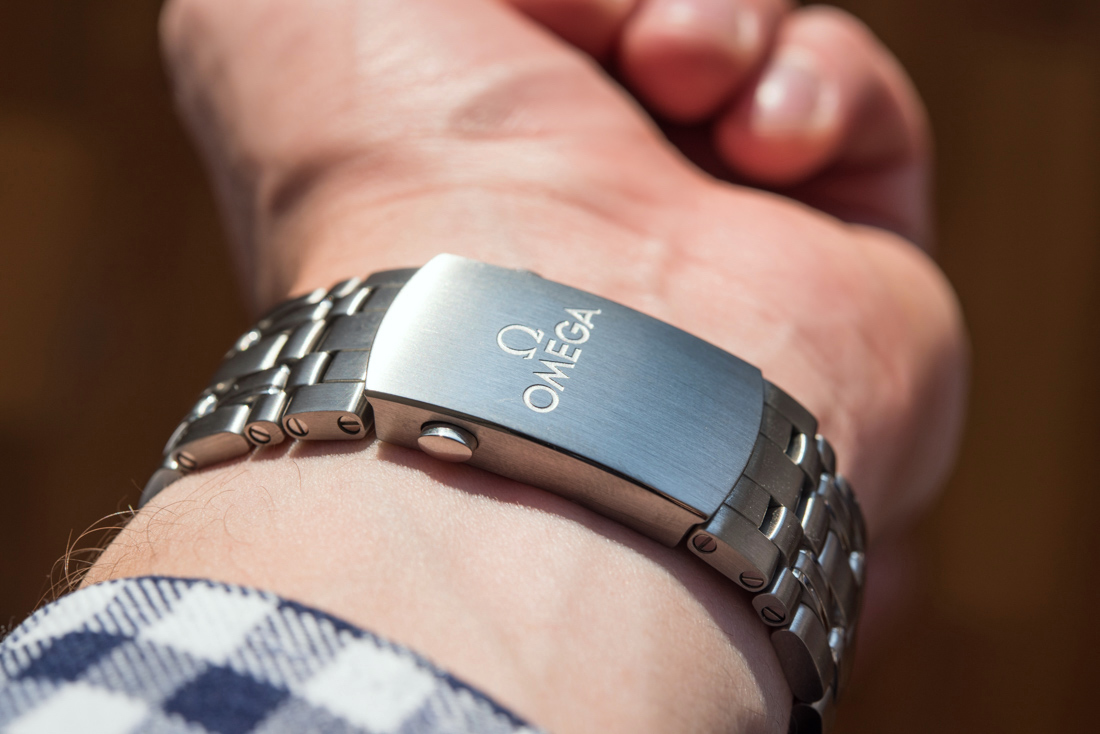 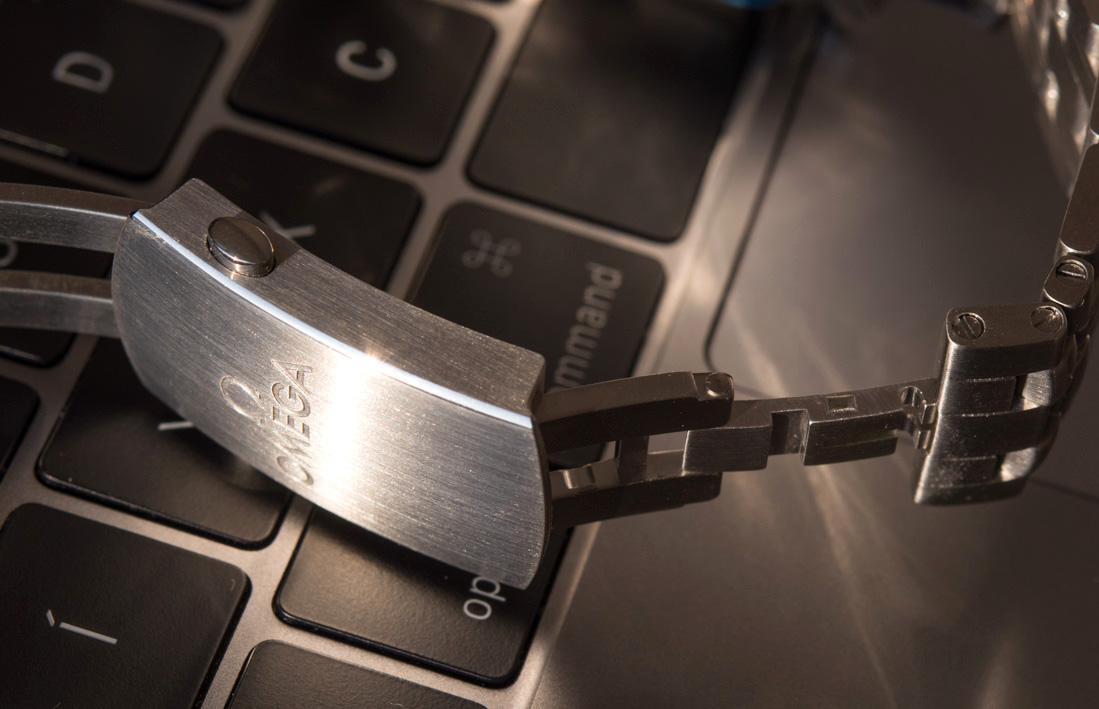 The clasp is a longer (but I believe not the longest) Omega-branded clasp that looks and feels great and exceeds the thickness of the links as little as is possible. Inside is a virtually useless diver’s extension, which is probably the biggest disappointment in this watch. If you are in the single-digit percentage of Seamaster owners who regularly (and I do mean regularly) dives with his/her Seamaster, then I must tell you, I’d gladly sacrifice your convenience in favor of some of mine – and the rest of the I guess around 95-99% of Seamaster owners who’ll never use this extension. 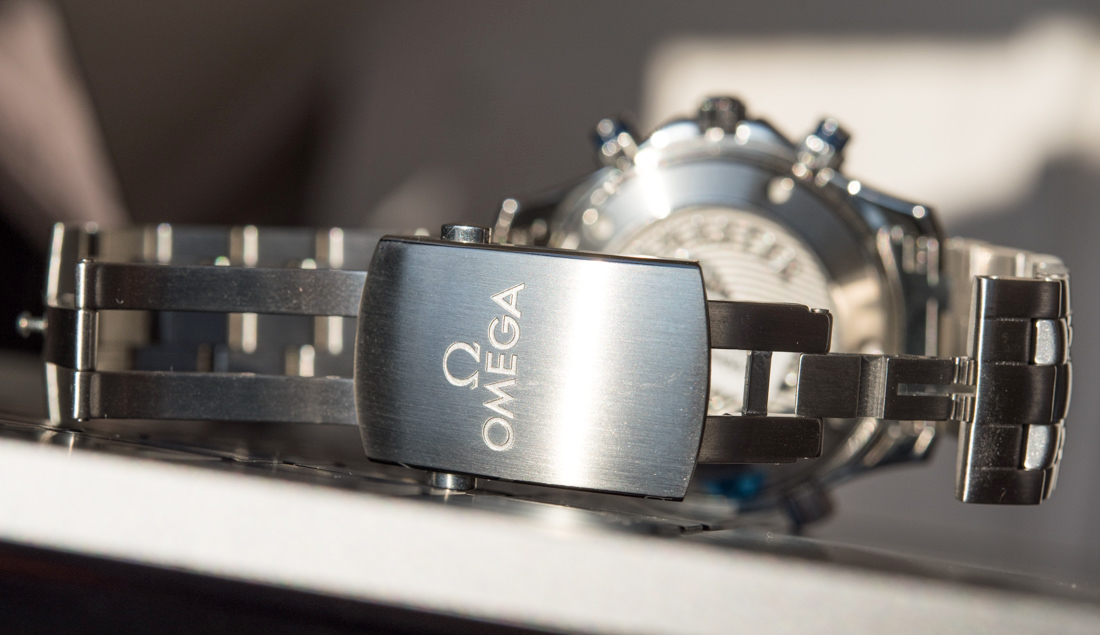 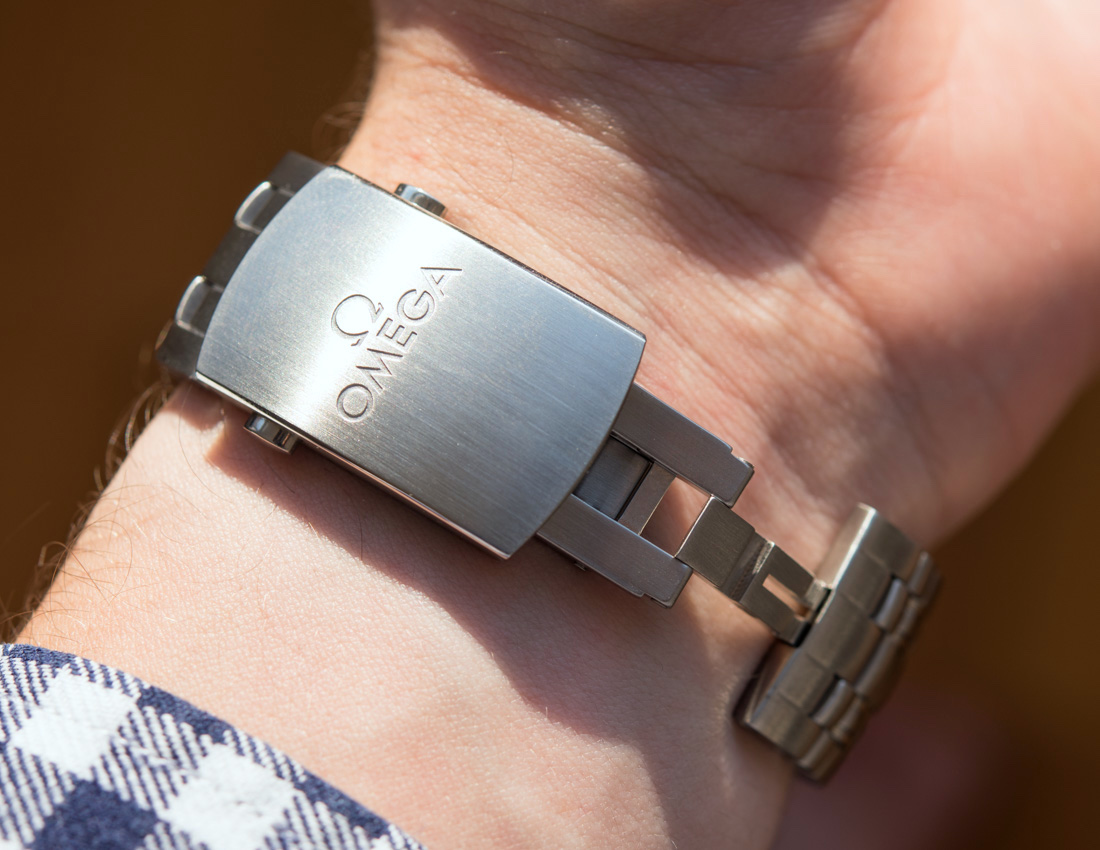 I would have loved to see a micro-adjust there, especially since, as I said, getting the fit just right is important with a watch of such considerable weight. Omega does have a micro-adjust in some of its other clasps and I wouldn’t be surprised if they could be easily swapped for the one in this. Long story short, the diver’s extension sounds good in press releases and online watch descriptions, but is totally useless in our everyday lives of desk diving. The diver’s extension should be an option offered to get if you want it, and not the other way around.