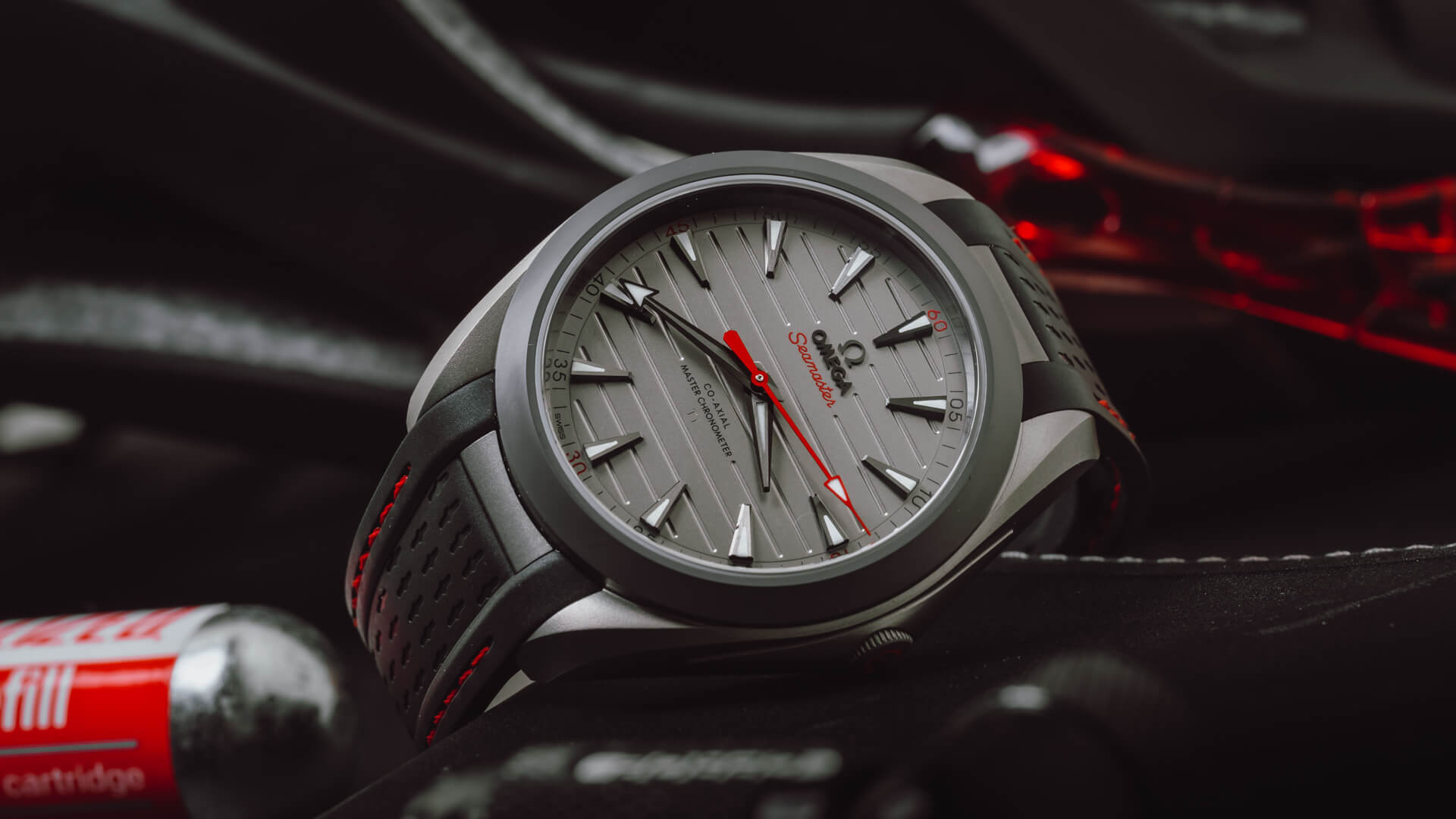 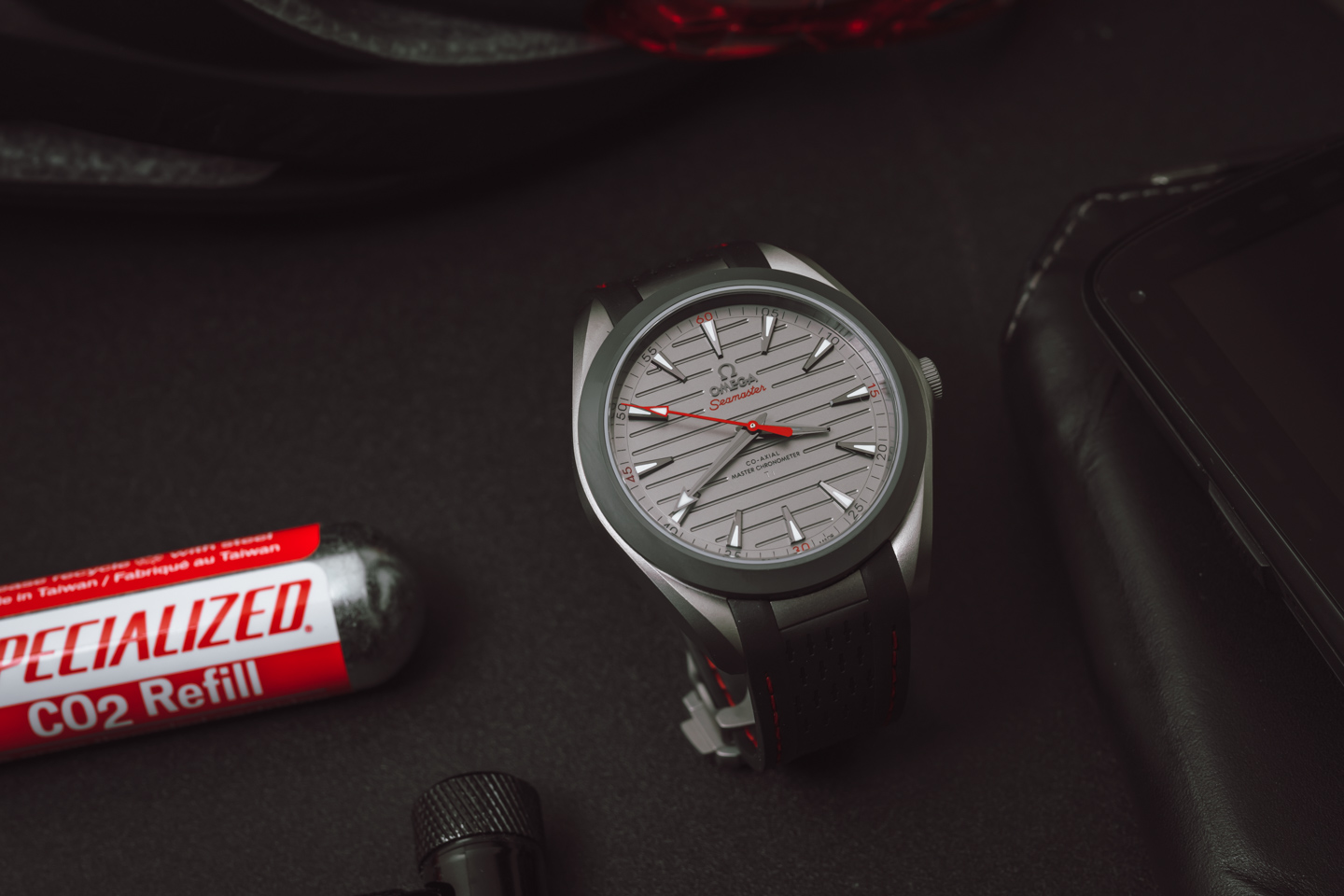 When it comes to the realm of ridiculous, ultralight sports watches, there are usually some pretty clear-cut concessions being made around actual real-world utility, as well as the ever-important, but subjective, concept of individual taste, particularly in a category where more flamboyant design tends to reign supreme. What makes the Omega Seamaster Aqua Terra “Ultra Light” so compelling, though, is that in addition to housing some pretty impressive case and movement innovations that yield a strikingly light presence on the wrist, it looks almost like any ordinary Seamaster Aqua Terra. It’s a bit strange to behold on the wrist because, unlike many similar halo watches that occupied this rarified space, this all-matte Aqua Terra flies completely under the radar with an impressively wearable and highly practical execution. Because of this, it is, for all intents and purposes, the ultimate Omega sports watch. There’s only one problem: it costs $50,000. 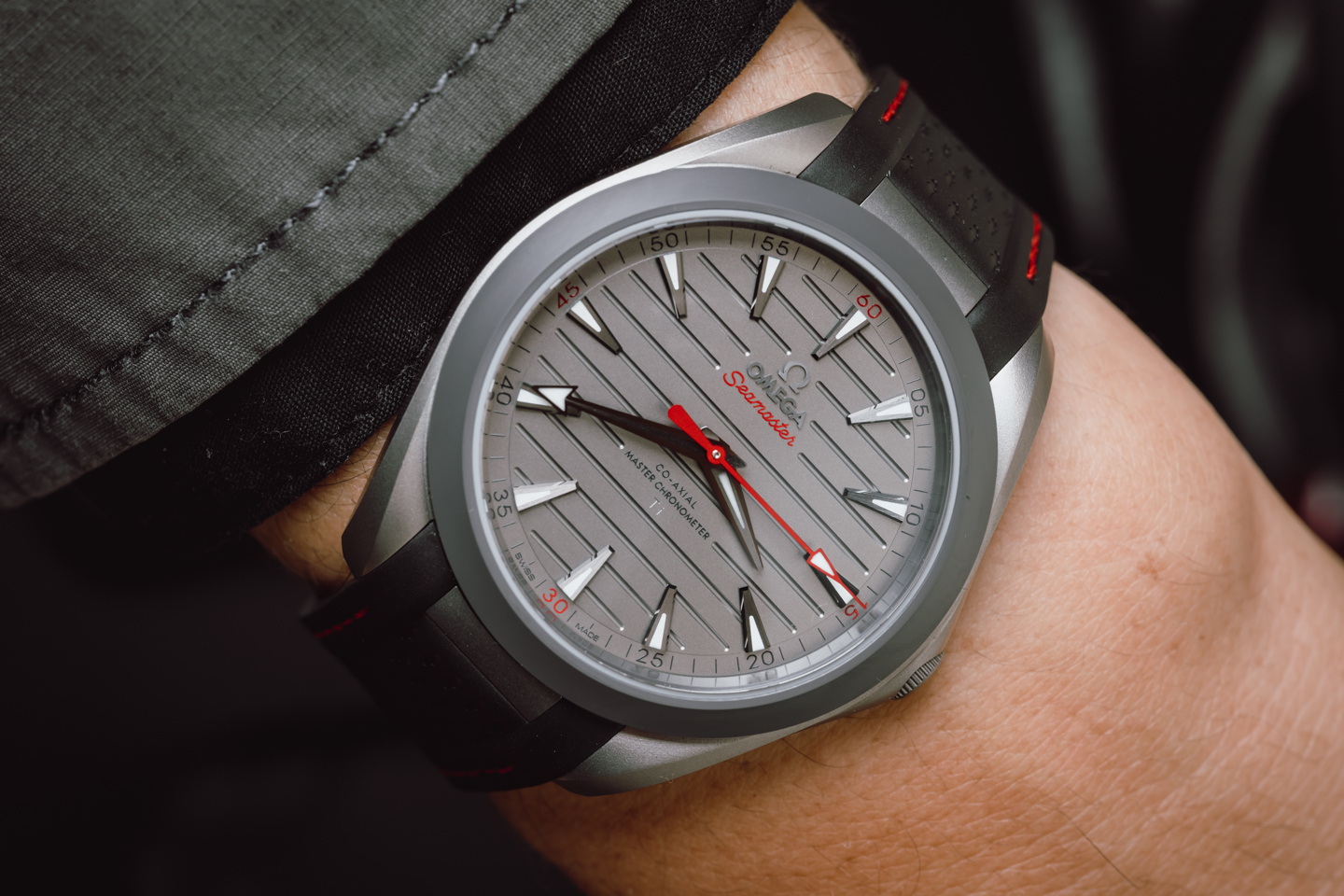 Launched way back in 2002, the Seamaster Aqua Terra is probably Omega’s most versatile sport-lifestyle watch, and about as close a competitor as the Bienne-based juggernaut has to compete with the perennially ubiquitous Rolex Datejust, which more or less tends to serve a similar design intent. But where the Datejust ends in singularity — more or less as a dressier style everyday (or “GADA” – “go anywhere, do anything”) watch, the Aqua Terra, over the course of the last two decades, has come to represent a platform of pretty impressive versatility and latitude that has included everything from simple day/date workhorses in steel or precious metal and globetrotting references with GMT complications to chronographs and regatta timers, a mind-blowingly gorgeous worldtimer, and yes — even the admittedly natural choice of super-spy James Bond. The unconventional Ultra Light is, in practice, the fullest extension of the Aqua Terra’s versatility — so much so that it almost feels more like a “concept watch” than anything, despite being readily available to anyone with the cash — and the lifestyle that might go along with it. 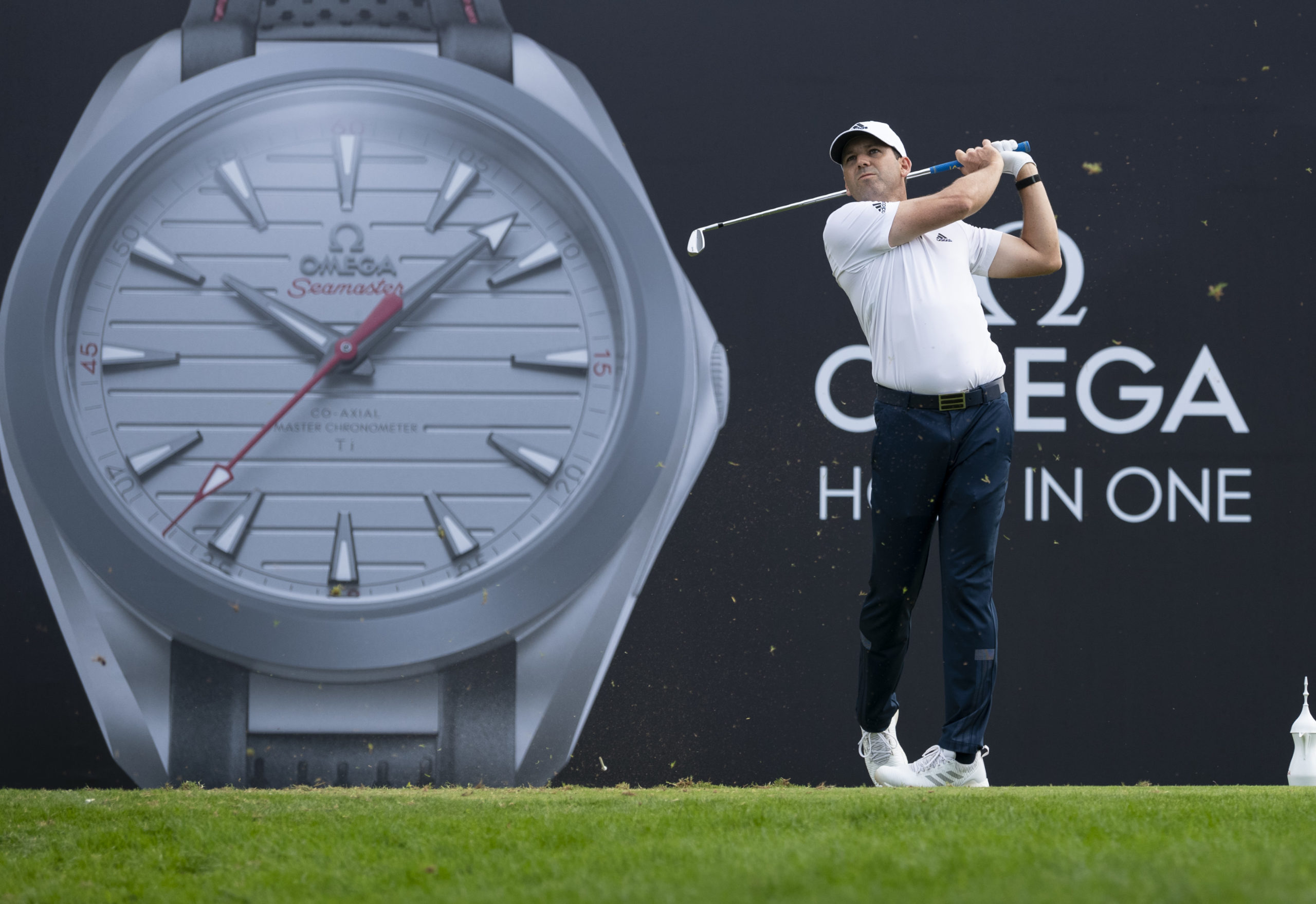 That lifestyle in question is that of professional golfers like Sergio Garcia, Rory Sutherland, and newly minted PGA championship winner Collin Morikawa — all of whom are Omega Ambassadors. It also might be for the young pole vaulting phenom and multi-world record holder Mondo Duplantis, another newly minted Omega wearer, who blasted into stardom this fall at an outdoor event in Rome when he cleared 6.15 meters (20 feet!) while wearing the Aqua Terra Ultra Light. And though a far cry from the usual yachting or motorsport tie-ins that we’re so used to seeing, the specific needs of these athletes helped form the basis for the watch’s design goals: a watch that was supremely lightweight, unobtrusive, and virtually unaffected by the effects of gravitational acceleration (ie: a high-speed golf swing, or a fall from 20 feet onto a landing pad). 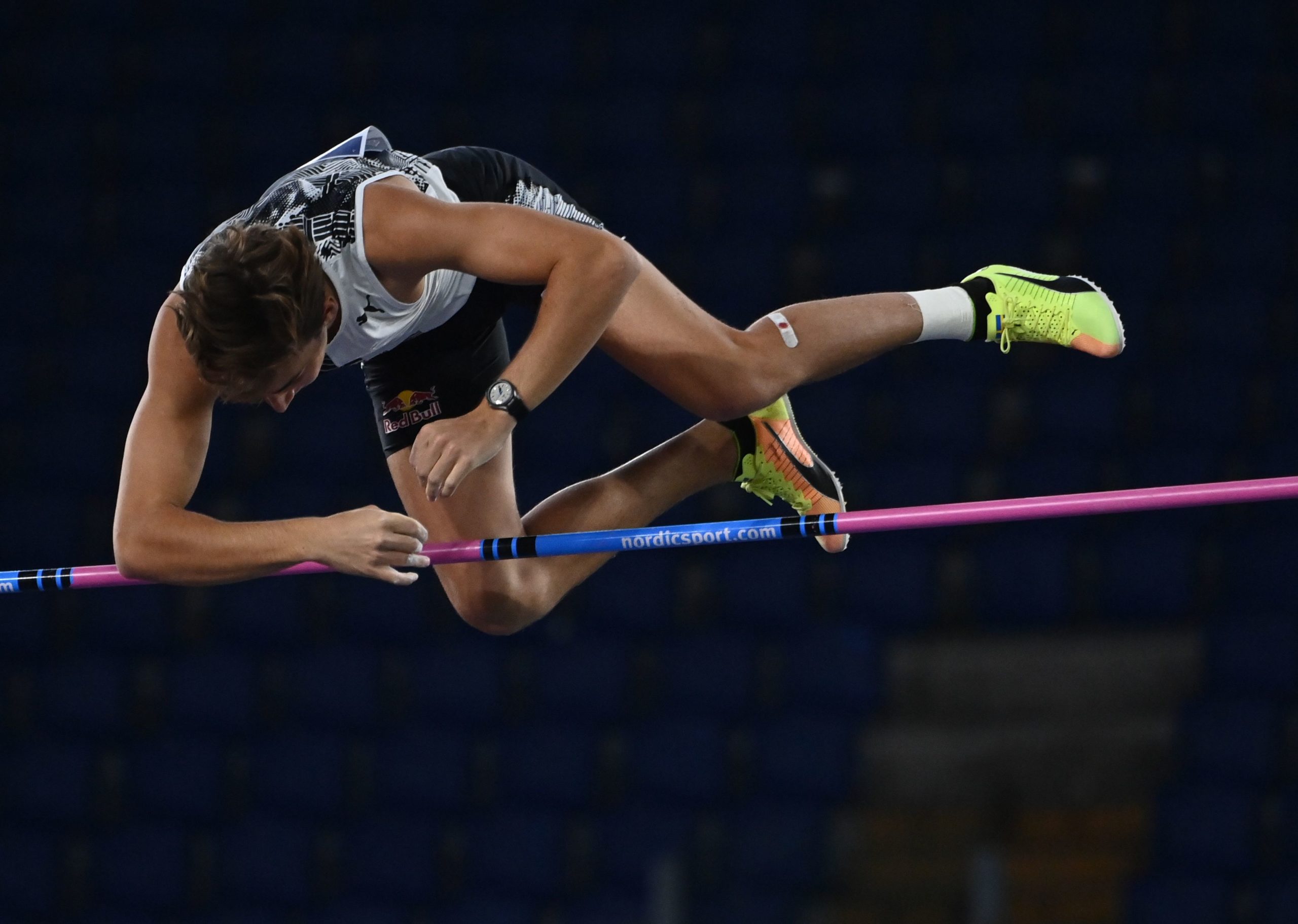 Duplantis on his way to setting another world record – his second in 2020, while framing one of the year’s most impressive wrist shots

Unlike last year’s wild Seamaster Planet Ocean “Ultra Deep,” which was 100% a concept watch and not intended for the general public, the Aqua Terra Ultra Light was developed primarily with Omega’s stable of athletes in mind. To get there, the Ultra Light was developed using a superlight new aerospace-grade alloy called Gamma Titanium and paired it with a new in-house-manufactured Calibre 8928 — a highly shock-resistant hand-wound movement that’s also been built out of titanium. Another innovative and markedly complex first for Omega. The movement is controlled by a spring-loaded crown that sits flush into the integrated lugs at 3 o’clock; simply give it a push, and it pops out of the case, enabling the wearer to more easily grip and therefore pull out the crown in order to set the time. Pushing it back in locks it against the caseband, and keeps it from digging into the wrist and out of the way during, say, pole-vaulting oneself into the history books.

At 55 grams on the nylon strap (pictured here on the slightly heavier integrated rubber strap), the watch is absurdly light, but it’s also not particularly large either, so its 41mm silhouette doesn’t lend itself to the weird optical and sensory illusion that something like a much larger composite-cased Richard Mille RM-27-04 for Rafael Nadal, the latest of which weighs a scant 30 grams, might. It’s worth mentioning that the ongoing Richard Mille and Nadal partnership has bred some of the lightest wristwatches in high-end sports horology, with the lightest being its first iteration: 2018’s RM-27 edition, which weighed only 19 grams on the strap. 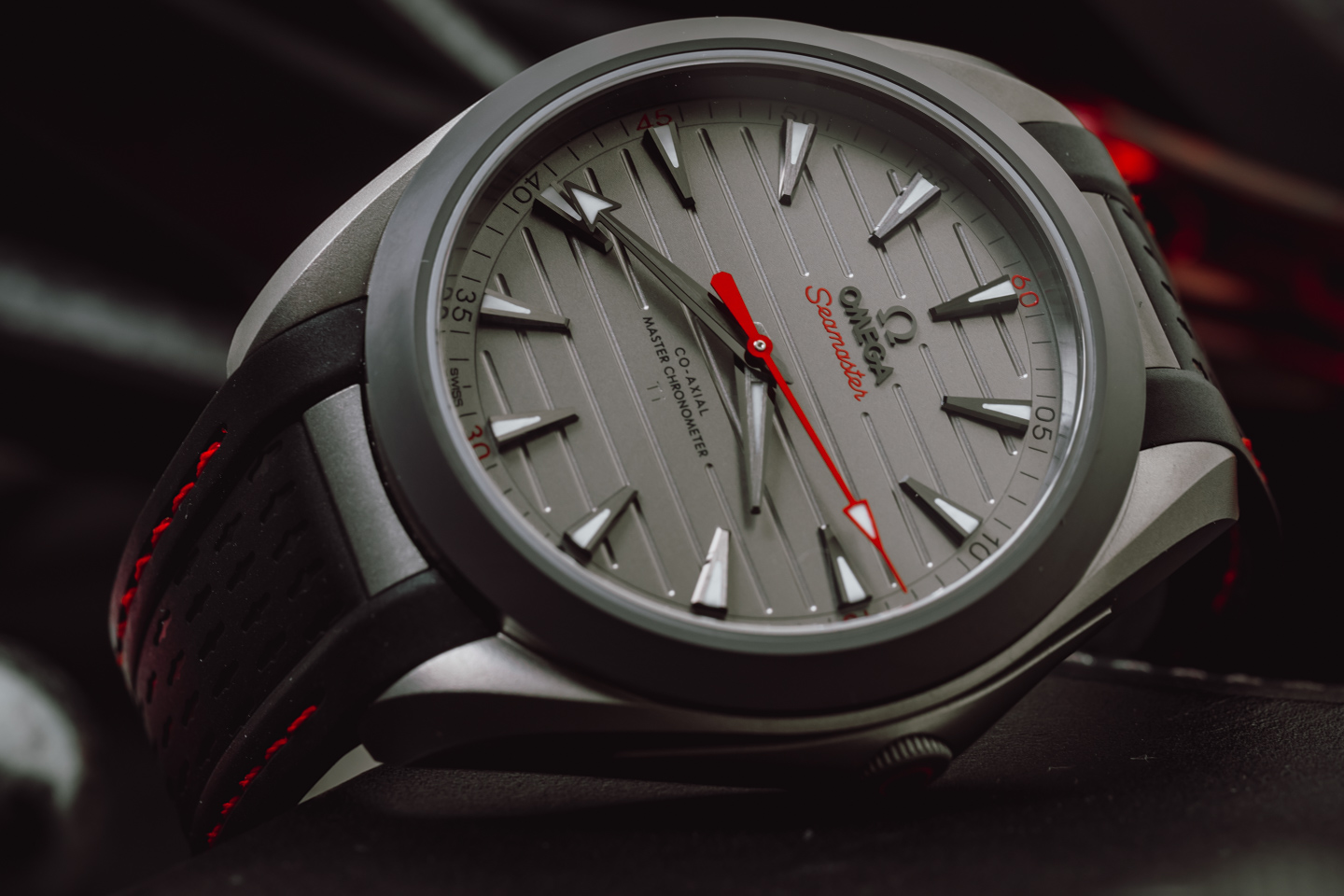 Even still, this Aqua Terra is damned light — ultralight, even. But what I’d argue is really the draw here is just how truly unassuming and downright ordinary it looks and feels on the wrist. It’s really light, for sure, not unlike the 38.5mm titanium Aqua Terra Good Planet from a few years back. Further lending to this is the total absence of any flourish whatsoever. No polished surfaces, no evocative text or naming convention, and definitely no bizarre skeletonized embellishments anywhere. Only the telescoping crown in its protective holster suggests that you’re looking at something special. Even its grooved “teak deck” style dial (which is encircled by a very cool matte, dark gray bezel) and 41mm case silhouette are both exactly the same as what’s found on the standard stainless steel Aqua Terra, making it, in a word, a perfectly formed portrait of restraint rendered in a wildly unrestrained execution. It’s truly high-tech stealth-wealth on a level that not even the usual avenues of white gold, tantalum, or even palladium-cased watches could touch — and for a certain segment of customers, I can’t imagine that this is a bad thing. 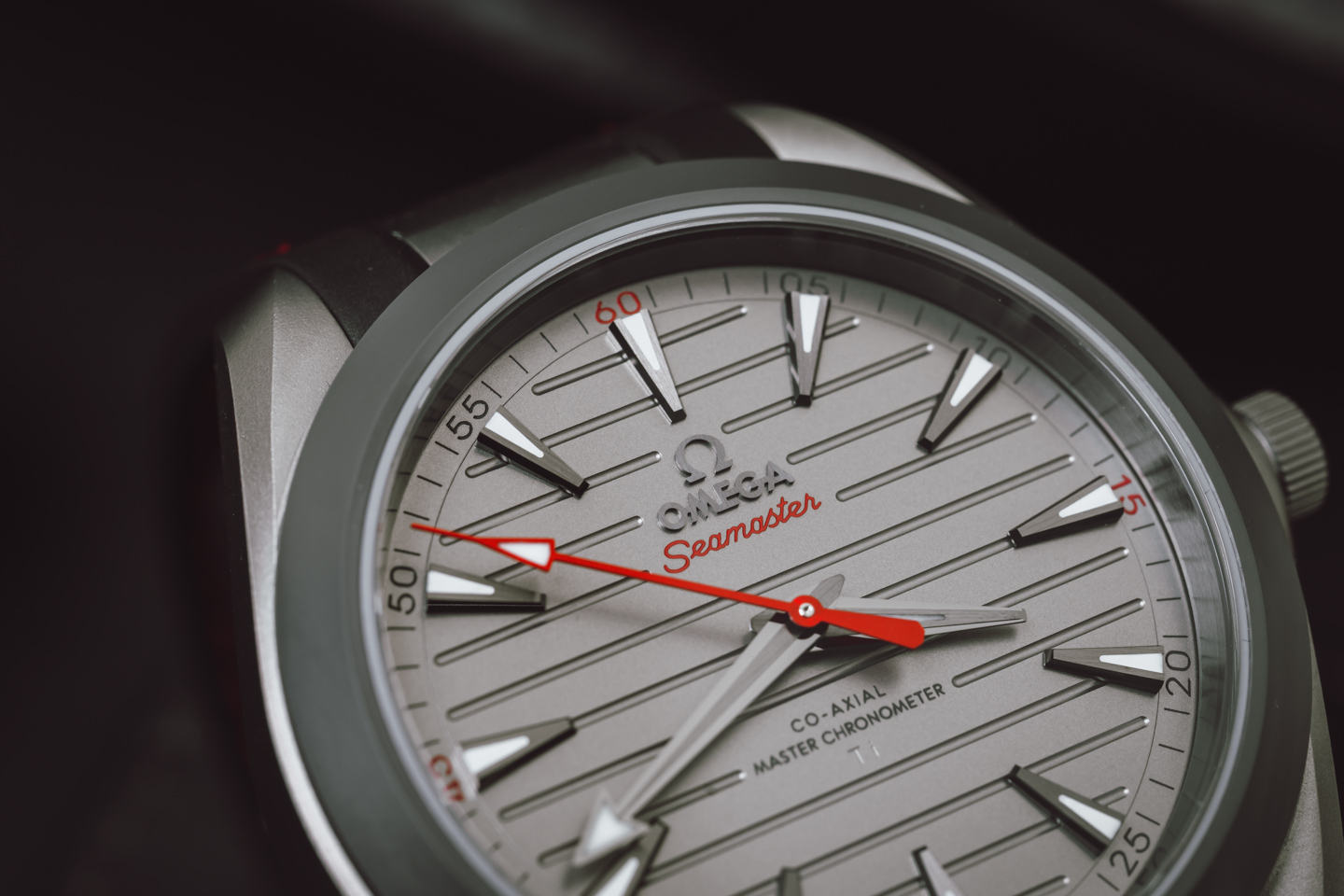 Even still, it does sorta beg the question: Who is a watch like this for again? We recently caught up with professional golfer Collin Morikawa shortly after the young phenom’s impressive PGA Championship win at TPC Harding Park in San Francisco, California. Since the win, Collin’s been spotted wearing the Ultra Light, though it’s worth mentioning that we were probably more interested in learning more about the shot that launched him into PGA tour history, but we also wanted to know more about his ambassadorship with Omega, and whether or not anything should be done with that infamous lid on the Wanamaker Trophy. 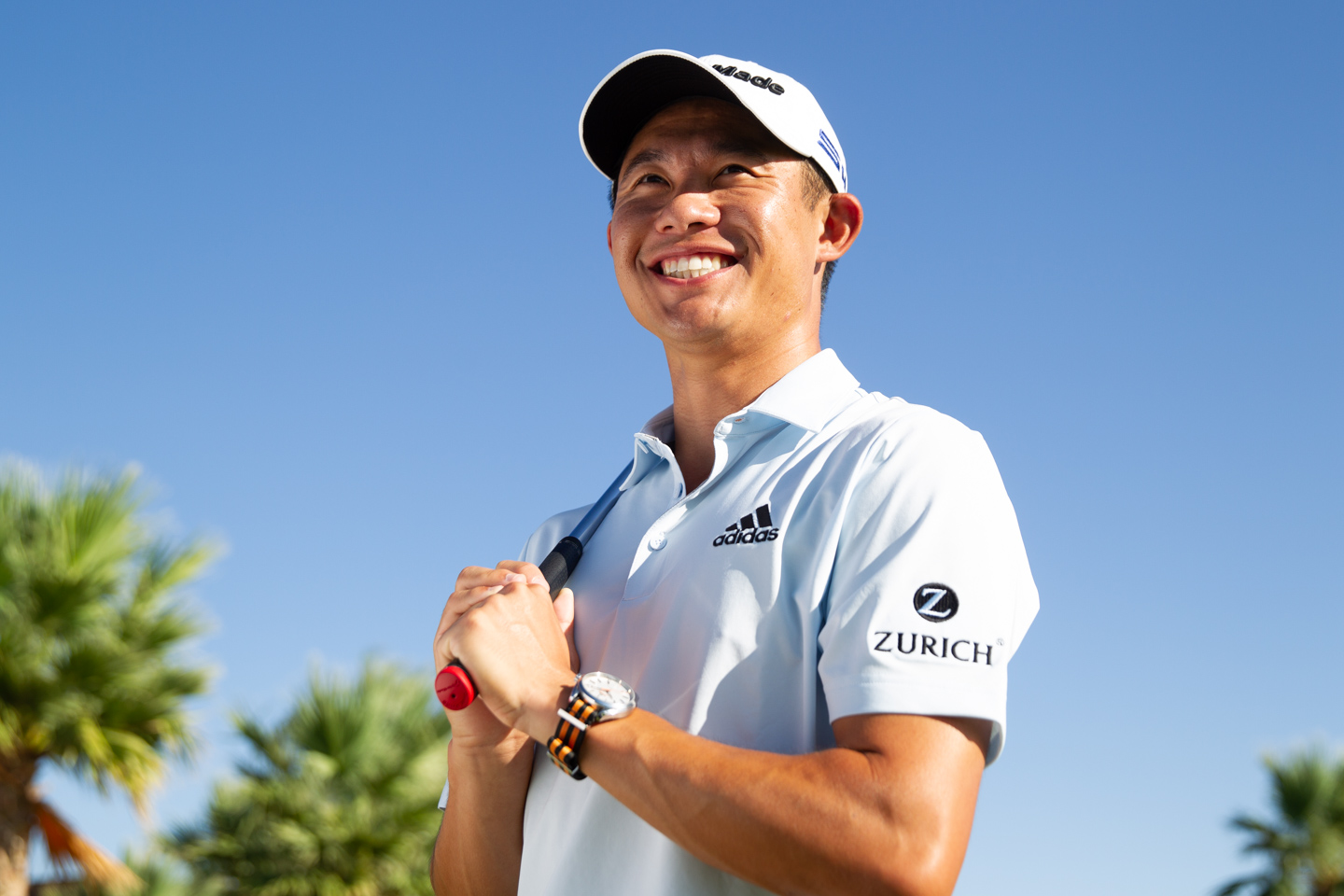 [ABTW] First of all, congratulations on your PGA Championship win! Take us through the sequence of events before hole 16. Was there a specific moment or a specific hole before your heroic shot that gave you the confidence to take such a monster drive? Were you already starting to manifest the win before that shot?

[Collin Morikawa] I looked at the leaderboard after 12, and I saw that there were 7 guys tied at -10 and I knew someone was going to have to birdie to win the tournament and it wasn’t going to be given to anyone. After I hit a bad approach shot on 14 and I chipped in I knew that was the moment I could take advantage of and use the next few holes to take a lead. I never thought I had the win even after the eagle putt on 16 because it’s a Major championship and nothing is over until the last putt drops. I had to stay focused through the day and not give any shots away on 17 or 18 because anyone could be making birdies on those two holes.

Now for the drive itself – I understand that during practice, you thought it was too high risk a shot, given the wind – what changed your mind, or were you planning to shoot for the green the whole time?

I think in the practice round I didn’t see a pin location distance-wise where the tees were gonna be for me to go to the green. But that’s golf, you have to adjust, you have to look at the conditions and with the tees being forward and the pins being very accessible, the driver was the perfect club. I didn’t have to do anything different; it was a soft driver for me that would’ve put the ball landing just short of the green and rolling up. That’s just what golf does — you have to adjust based on what’s given and what’s in front of you.

When it comes to the major tournaments, every shot should be hard – but how do you decide to take the risk rather than play it safe?

I wouldn’t say it was risky. It was really just the right shot at the moment. When you come down the last few holes in a Major championship, you have to feel comfortable, and that shot felt comfortable to me. It wasn’t doing anything different, it was just hitting my normal fade. I came down the left side of the green, let it fall back to the right. It the right shot to play and obviously it worked out and the drive looked a lot better than some would have said given how hard the shot really was.

Did being a Norcal local during your Cal tenure help give you more familiarity and confidence with playing at Harding Park? 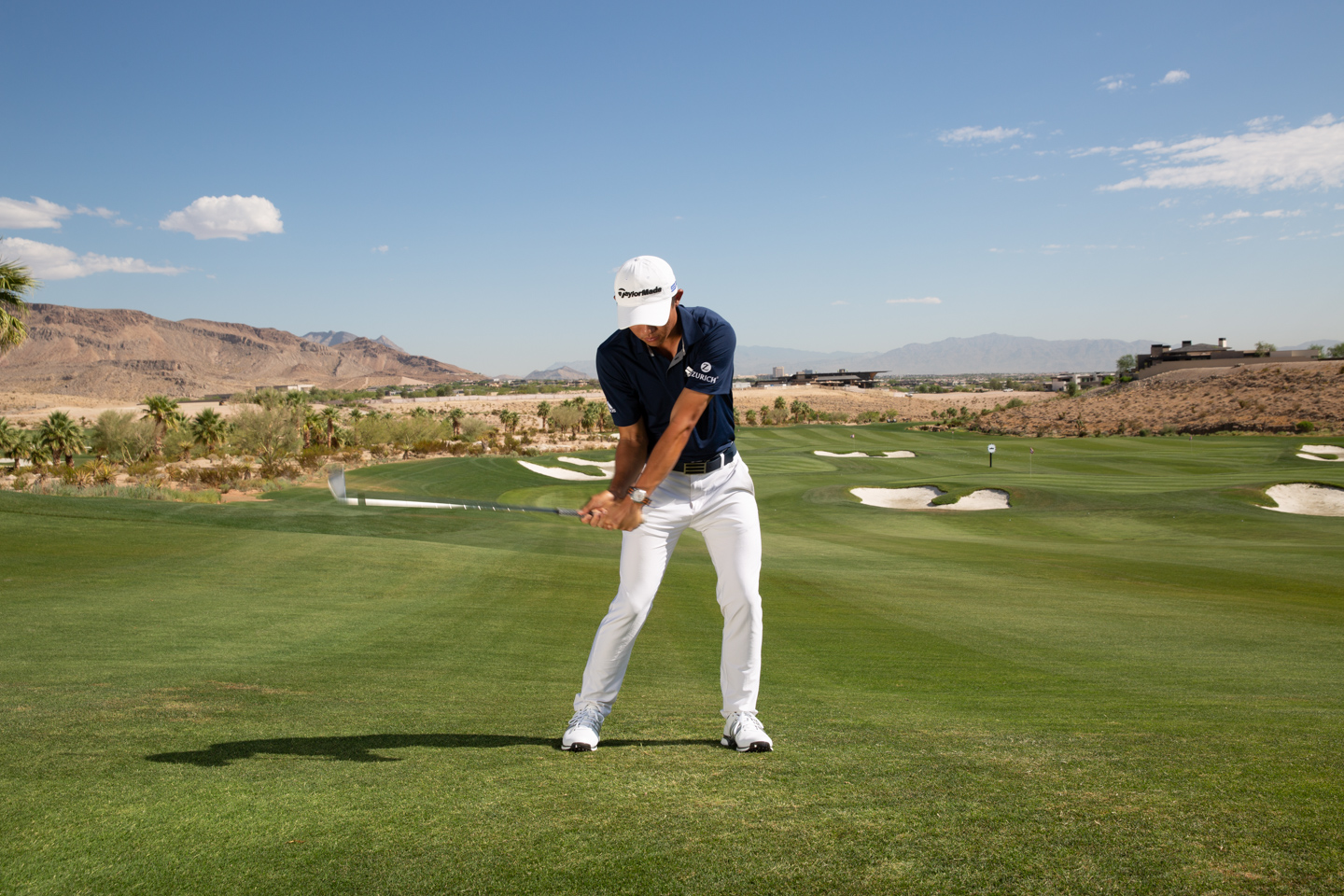 What did March through May look like for your preparation for the PGA Tour?

The first month and a half until we found out we were going to return, it was hard to practice and grind down on the range and the course because the motivation wasn’t there. While it was hard, it was also nice to take a break from the clubs. We got notice about a month-and-a-half out that we were going to be starting back up. I loved being back out there and knowing that we were getting ready for a great stretch of golf.

What’s it like playing a major tournament in the absence of large crowds?

It’s very different and I’ve only played 3 majors and 2 of the having been without crowds. The crowds really bring life and energy and get your adrenaline pumping and for a Major Championship that can be a deciding factor in what happens on Sunday. Obviously, I’m happy how everything ended, but we miss the crowds a lot. 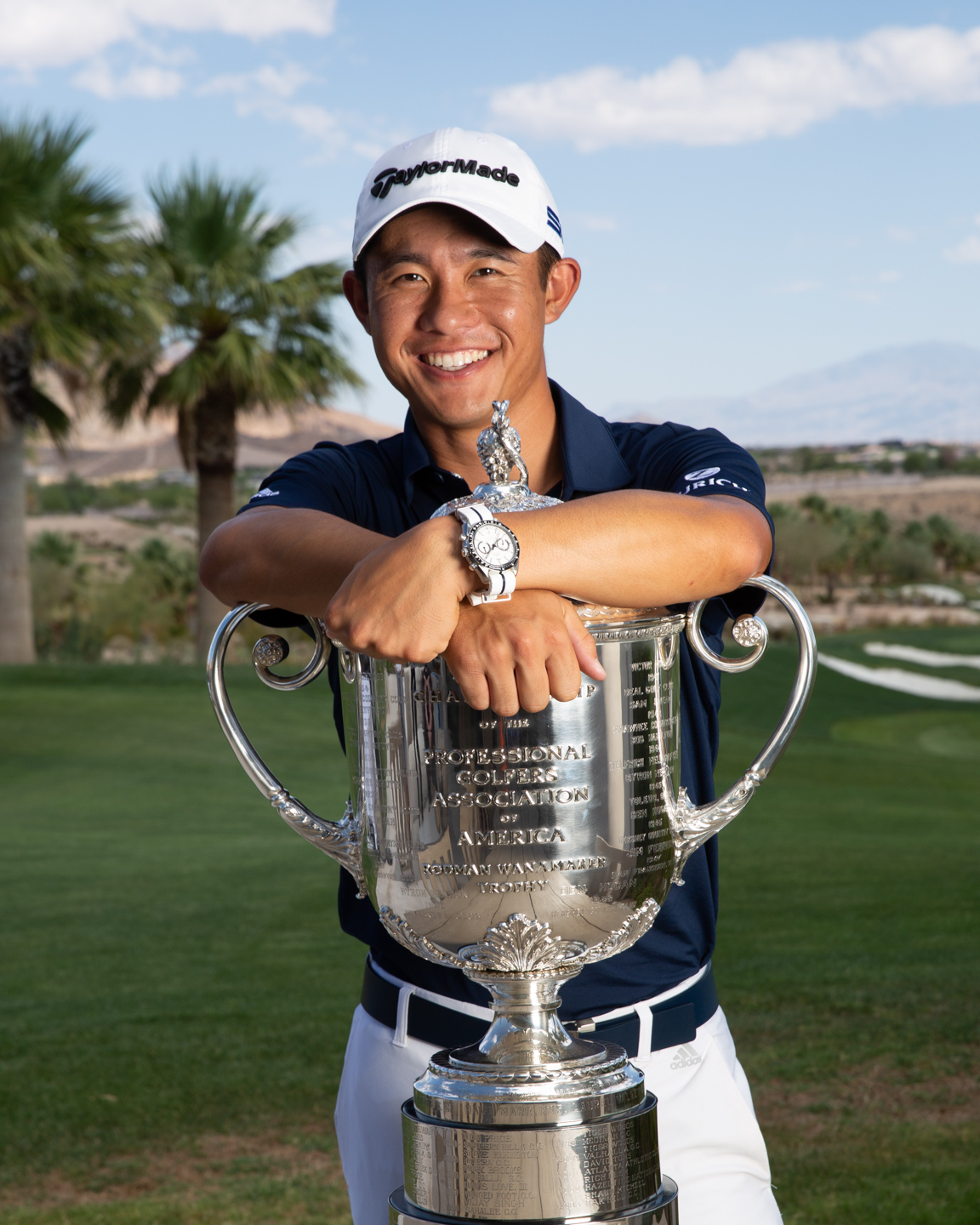 Tell us a little about that sweet Speedmaster you wore when hoisting the trophy? Is this a personal watch or a newly minted memento?

Do you have a specific watch in mind to maybe commemorate the win?

As the winner of the PGA Championship, I was gifted an Omega Seamaster 300, so it would definitely have to be that for me. 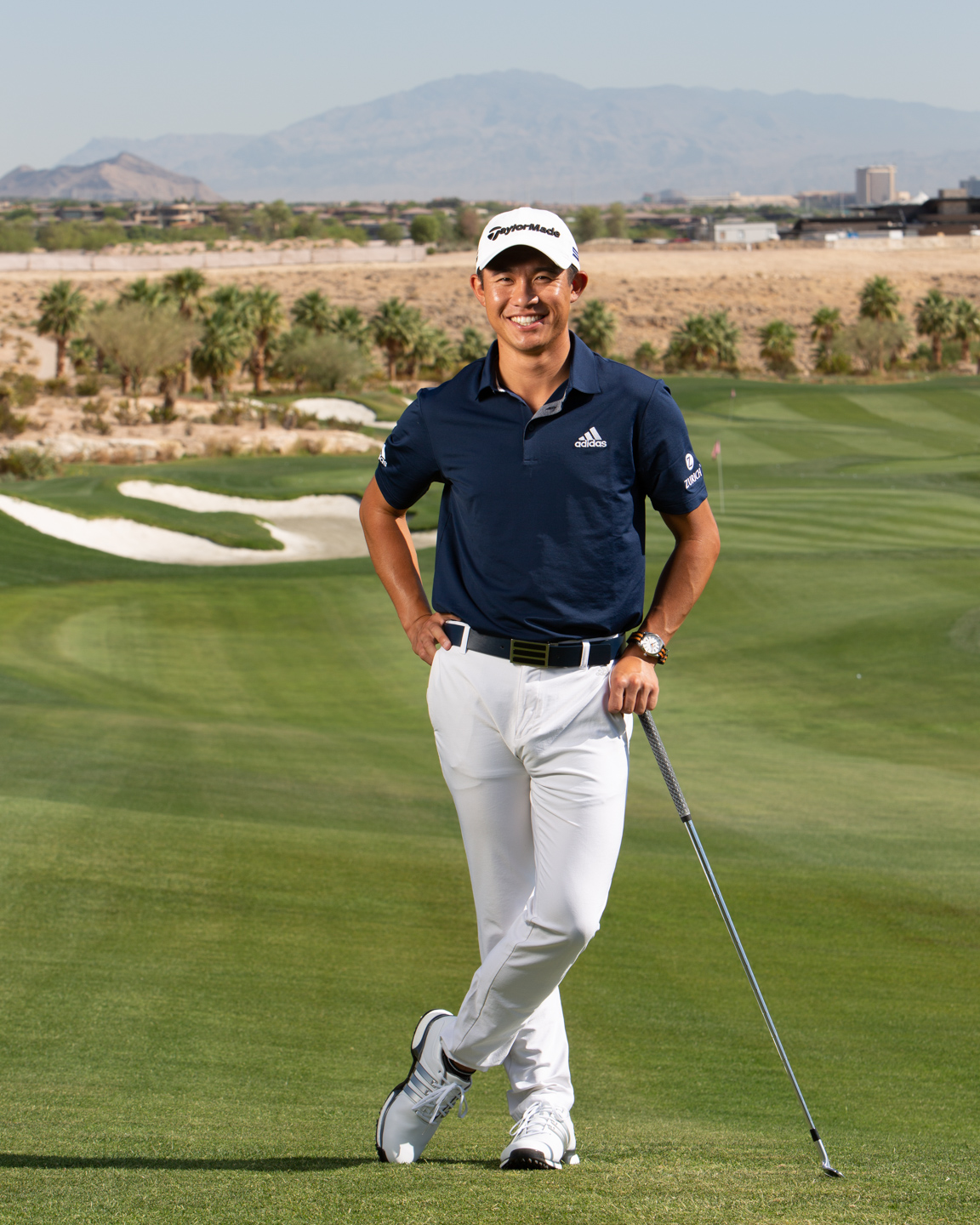 We’ve noticed there are definitely plenty of professional golfers who are also watch fans – would you consider yourself a “watch guy,” and if so, what else is in your collection?

Yes, I’ve definitely gotten to learn a lot more about watches now that I’m with Omega. I’ve talked to Rory McIlroy quite a few times about watches and I’m very interested in them and love learning about them now. I have the Speedmaster 57, Seamaster 300, the Speedmaster Racing Master Co-Axial Master Chronometer Chronograph, and the Aqua Terra Ultra Light.

Last question: Does the lid on the Wanamaker trophy really need fixing or do you think the occasional lid fumble ought to become a proper rite of passage for young phenoms?

I think it should stay the way it is. If someone remembers to not drop it the way that I did, then they get a pass, but if you do a lot of people will enjoy the moment, so it’ll be a memorable experience no matter what if you’re hoisting that trophy. [ABTW]

The Omega Seamaster Aqua Terra “Ultra Light” in Gamma Titanium is available from select Omega retailers and carries a price of $48,600 USD. Learn more about this reference at omegawatches.com.