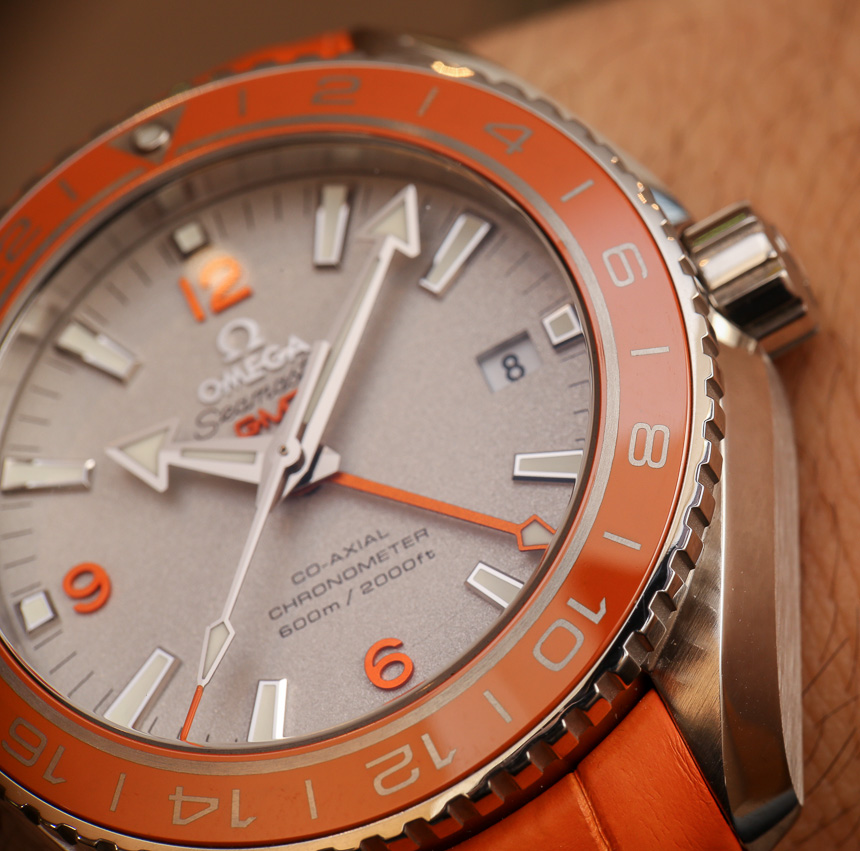 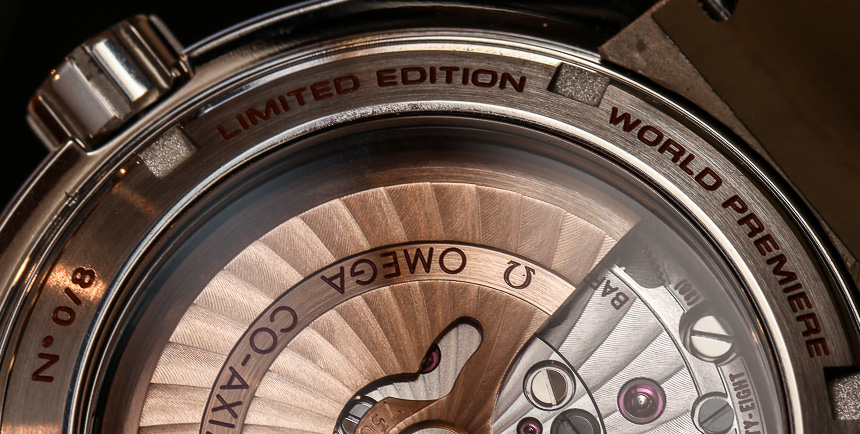 An interesting reason Omega chose the GMT is because they felt an orange bezel could play off a color on the GMT’s 24 hour hand. That makes sense but it is also because many people in Omega’s product group feel that the roughly 43mm wide case of the GMT is the perfect size for a modern Omega Seamaster Planet Ocean watch… and I tend to agree. The PO GMT is still a newer model being released in 2013 and it is a great way to introduce more color into the collection – especially since orange is such a hallmark hue in the Omega Seamaster Planet Ocean family.

A question I had for Omega is what they needed to do in order to overcome the scientific problems related to the production of ceramic parts. Of course the specific formula is secret and currently being patented by the company. Omega was nice enough to explain in detail that it was a matter of the baking process as well as the formulation of the base ceramic power. Ceramic needs pigment for color, but oftentimes pigments can dissipate during the incredibly hot sintering processes. To make a long story short, Omega discovered that the use of a specific rare earth element was able to stabilize the pigment enough to survive the sintering process.

Something that can happen is increased fragility and brittleness with colored ceramic. Because it is used as a scratch and fade-resistant material in the bezel I don’t think that its being a bit more fragile than black or white ceramic is a huge issue. Then again, it might mean that we aren’t going to see orange ceramic cases soon (Orange Side Of The Moon?). What you need to know is that Omega isn’t doctoring up the images of the Omega Seamaster Planet Ocean GMT Orange Ceramic. The color is a nice orange, and it looks as though they have succeeded in bringing an important watch design color to the ceramic world. 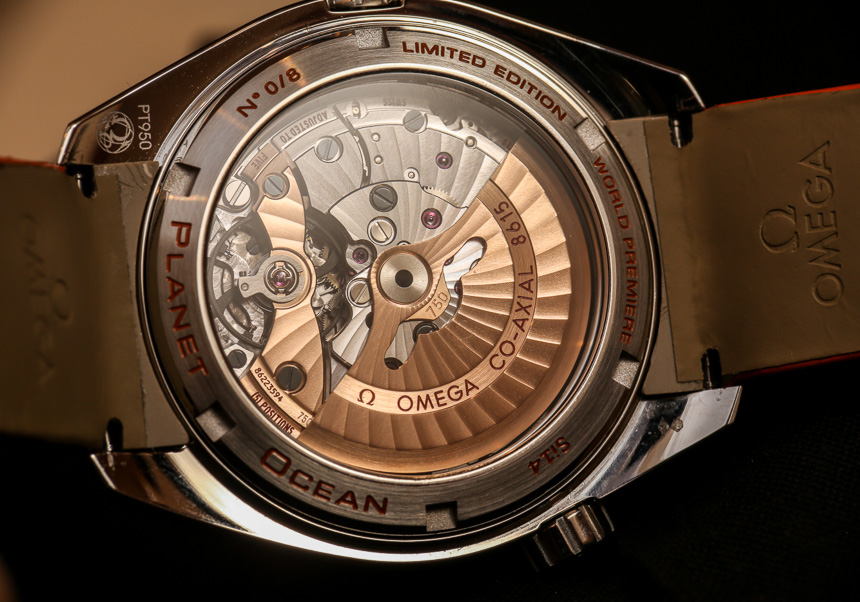 Speaking of Liquid Metal – Omega uses that process to fill in the 24 hour markers on the orange bezel. Here again is another “World Premiere” for a watch – it is Liquid Metal platinum. Platinum is actually a major material on the watch. Omega uses 950 platinum for the watch case, bezel metal material, dial, buckle and strap stitching. I am of course reminded by some of the platinum-crazy Vacheron Constantin watches that use platinum for as much of the watch as possible. Here you have an Omega dive watch doing it… I certainly didn’t predict that coming.

Just over where the hands on the dial connect you can see the small “PT 950” material indication printed. Finish is attractive and even though the dial, to a degree, is a silver on silver color it is still very legible. I love the finishing of the face as well, which is a sort of slightly shiny yet sand-blasted look. Platinum is not used for the hands and hour markers – which in this case are produced from 18k white gold. The fact that the buckle is in platinum is also rather uncommon. Most platinum Omega watches (rare enough as it is) use 18k white gold for the strap buckles. Not here, the standard Omega Seamaster Planet Ocean deployant is in solid platinum. 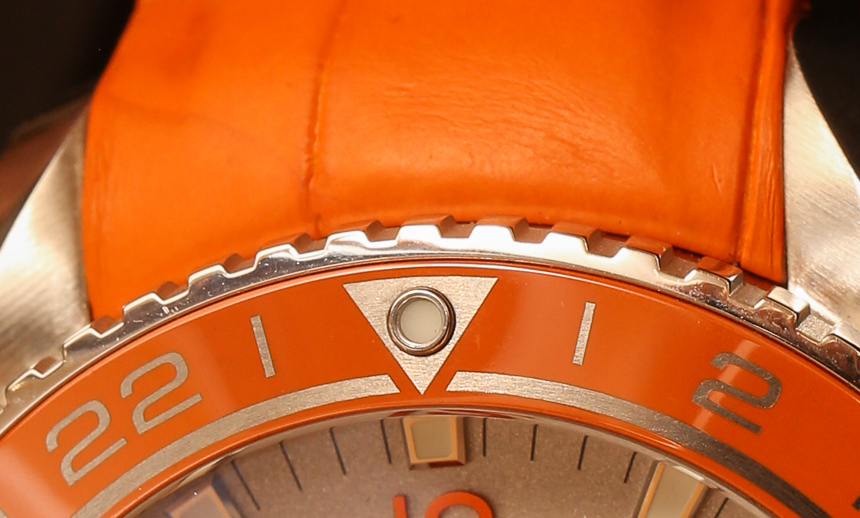 As you probably already know, all Omega Seamaster Planet Ocean watches have in-house made Omega Co-Axial movements that are COSC Chronometer certified. The GMT if you recall uses the Omega caliber 8615 automatic movement that has the time, GMT 24 hour hand as a second time zone, as well as the date. In addition to having a Co-Axial escapement, the movement also has a silicon hairspring that does not require lubrication and helps maintain the accuracy of the watch longer. 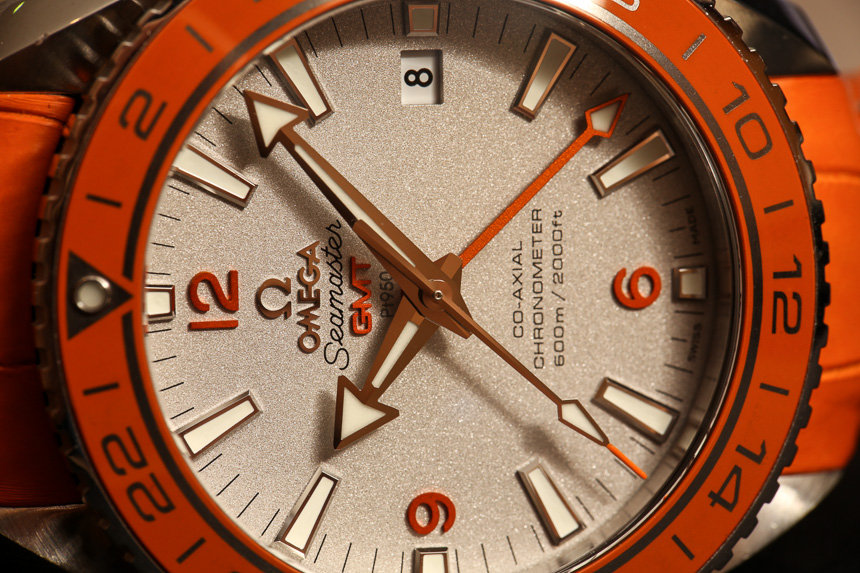 You can see the movement through the rear of the case via the sapphire crystal case back window. Given that this is a much higher-end version of the Omega Seamaster Planet Ocean, you have the 18k rose gold elements in the movement for the automatic rotor as well as the bridge over the balance wheel. While not unheard of, it is not common to find timepieces that are water resistant to 500 meters or more that have exhibition case backs like this.

Omega includes an orange alligator strap as well as one in rubber (also orange of course) with the Omega Seamaster Planet Ocean GMT Orange Ceramic watch. One of the things that I really like about it is that it does not scream “I am expensive,” even though it is very valuable. There aren’t diamonds and the more fun colors don’t lend themselves to thinking about platinum. Either that is bad or just very cool. It really doesn’t matter much for most Omega fans because Omega has produced just 8 pieces total of this limited edition watch. What everyone should be excited about is the eventual roll-out of the orange ceramic technology that will be coming into more accessibly priced Omega Seamaster Planet Ocean watches soon. Price is 59,000 Swiss Francs. omegawatches.com