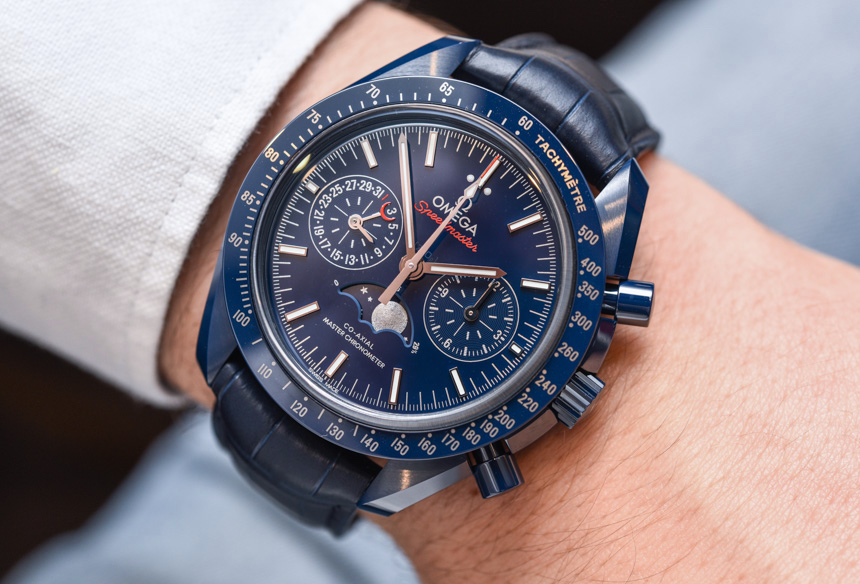 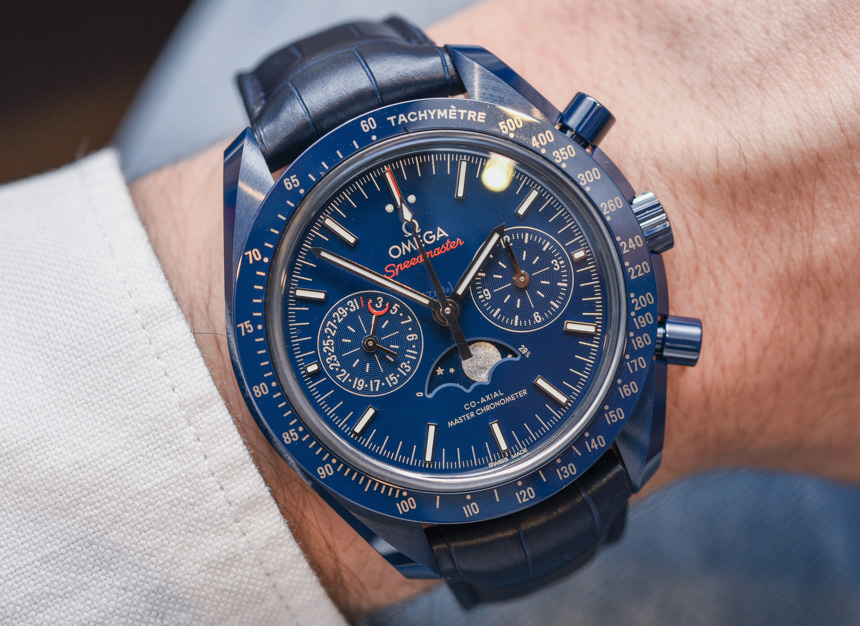 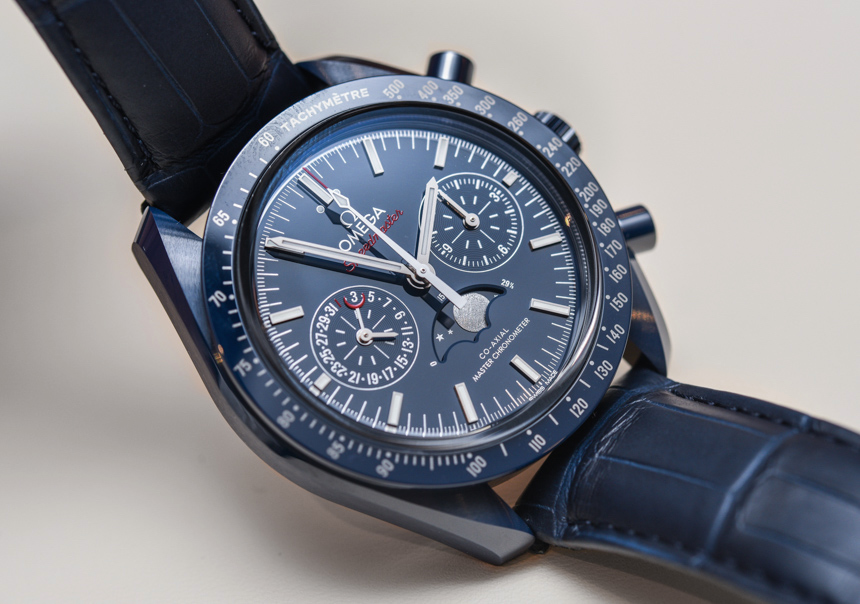 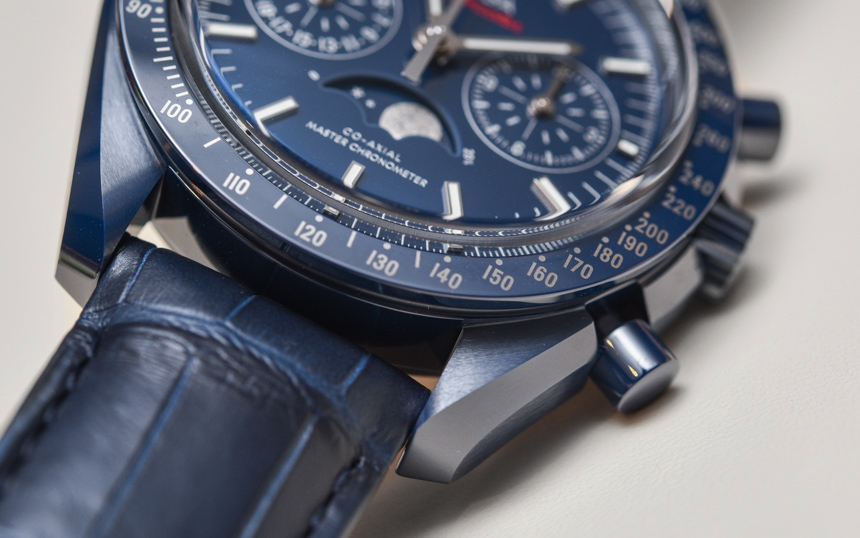 Rather than focus on the standard Speedmaster Co-Axial Master Chronometer Chronograph with the in-house made caliber 9900 movement, this new ceramic Speedmaster is based on the Omega Speedmaster Co-Axial Chronometer Chronograph Moonphase with the in-house made caliber 9904 which I have done an aBlogtoWatch review on here. The Blue Side Of The Moon is more or less the same blue Speedmaster Moonphase watch I reviewed, but with an elegant, rich blue ceramic case. It is quite literally the bluest Speedmaster yet! This is good for fans of the hue, which has been very popular over the last few years in anything from sport to dress watches and everything in between. 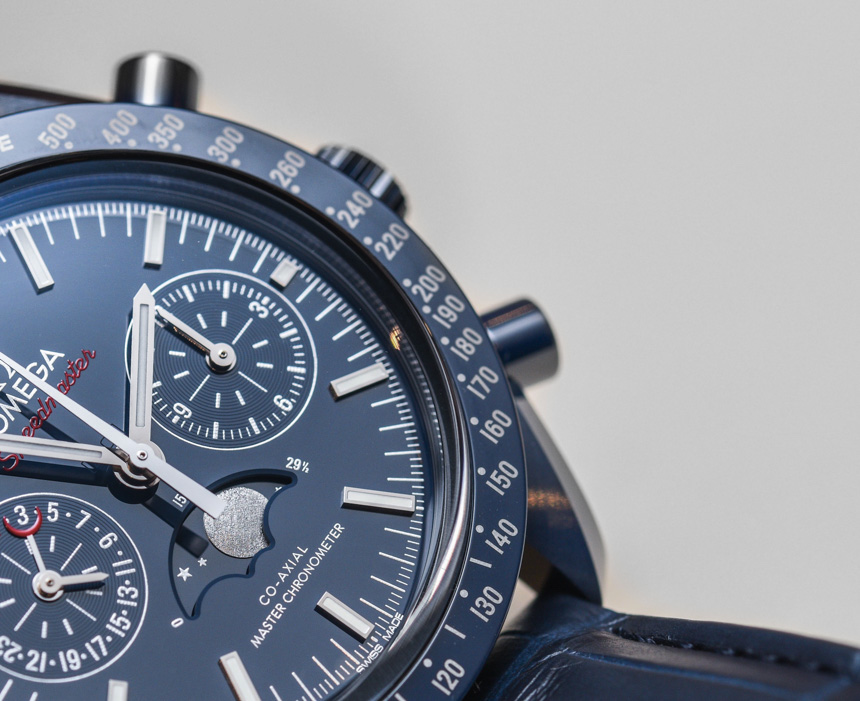 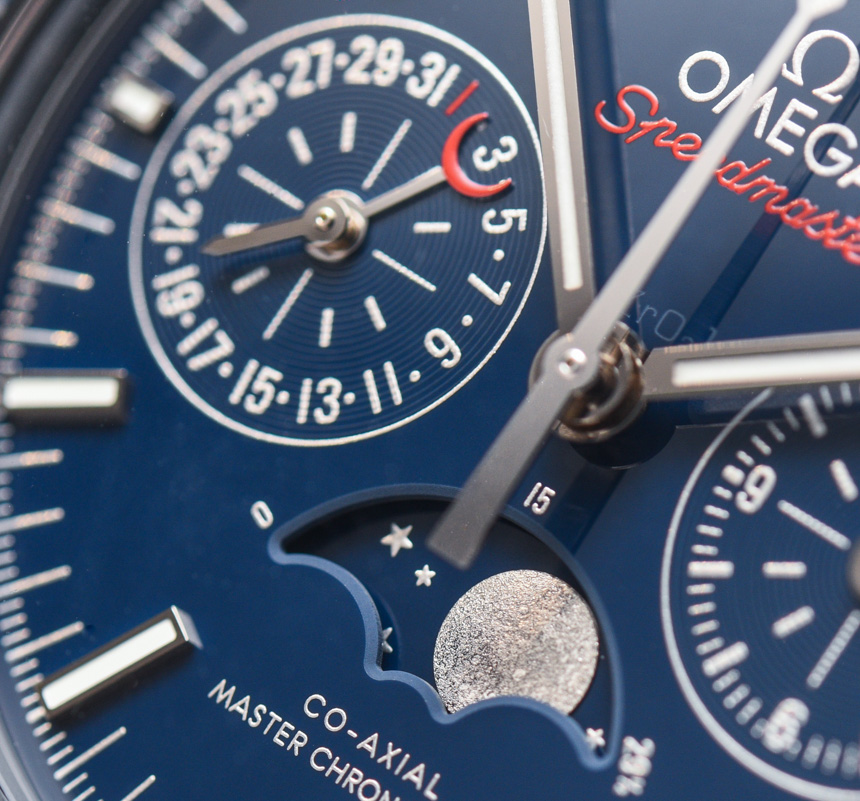 Recall that Omega uses ceramic for this Speedmaster Moonphase’s case, pushers, bezel, and dial. Even the moon phase indicator disc is said to be in blue ceramic. The mixture of flat finishes and the contrast between the blue and the 18k white gold hour markers and hands is lovely. This isn’t the ceramic Speedmaster for everyone, but I think the Blue Side Of The Moon has the potential for some cult status in a few years given its distinctive and different, yet altogether familiar looks. 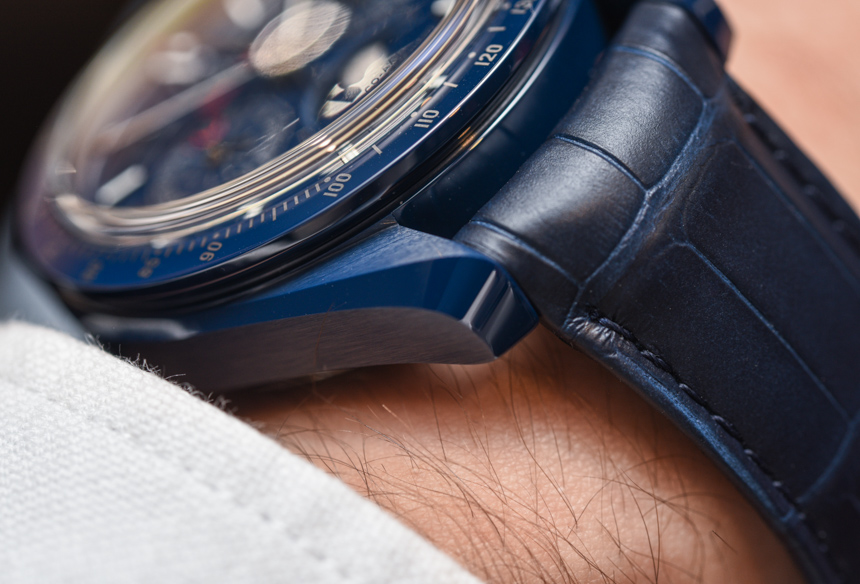 Remember as well that the blue dial and bezel style are different on the Blue Side Of The Moon Speedmaster Moonphase versus the steel-cased one that I previously reviewed and linked to above. Whereas the dial on the steel model is a polished sunray metallic blue, you get a more matte, deep blue given the blue ceramic dial of this model. I personally think that the Blue Side Of The Moon will be the version most people prefer – when trying to figure out what blue Speedmaster to get. 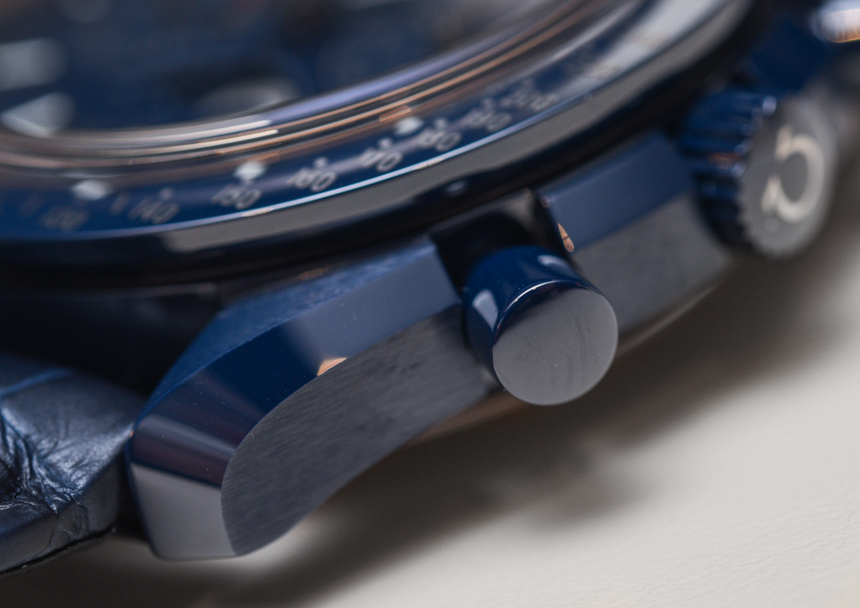 The 44.25mm wide case is large but comfortable. It is 11.7mm thick and feels tall thanks to the box-style sapphire crystal. Omega does an excellent job at rendering ceramic to look like polished metal. The trick is replicating the contrasting polished and brushed finishing on the case – just as is done with metal cases. This is what makes the original Dark Side Of The Moon Speedmaster so popular, and why now in blue it looks just as lovely. 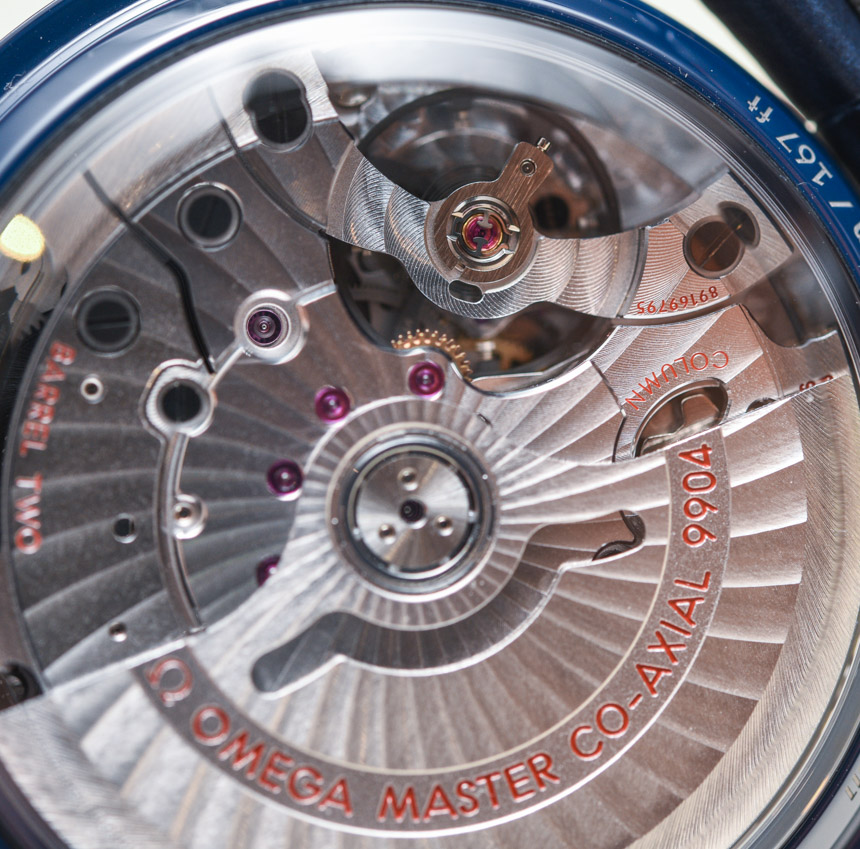 As we have covered the core Speedmaster Co-Axial Master Chronometer Chronograph Moonphase watch before, I am not going to revisit the movement or the watch’s functionality in detail. Recall that the caliber 9904 movement adds a moon phase indicator to the chronograph and date complications. The symmetry of the movement’s dial layout is impressive and something to desire. Notice how each of the sub-dials has two hands. This is really one of the most interesting and appealing modern Omega movements to date. It, of course, has a co-axial escapement, METAS certification (and all that goes with it), 4Hz operational frequency, and 60 hours of power reserve. The movement can be easily admired through the caseback’s sapphire crystal window. 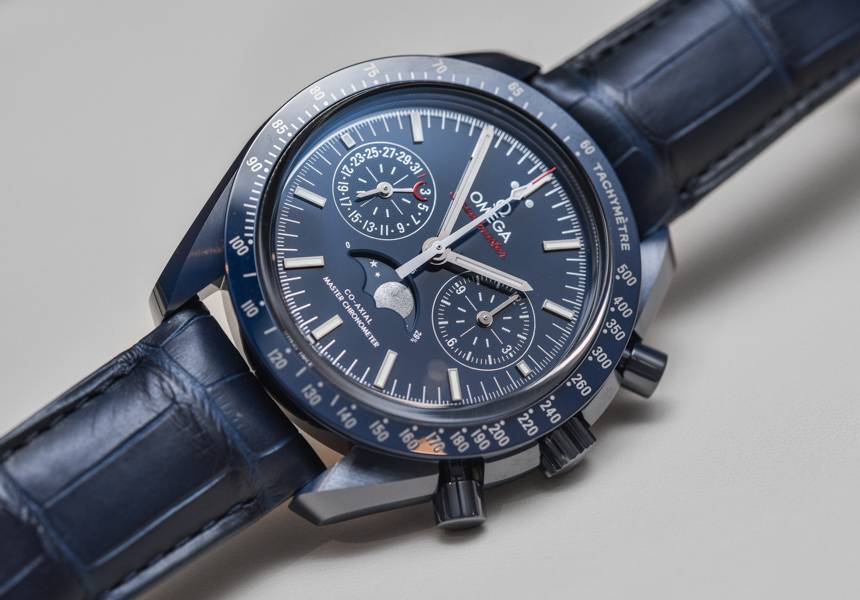 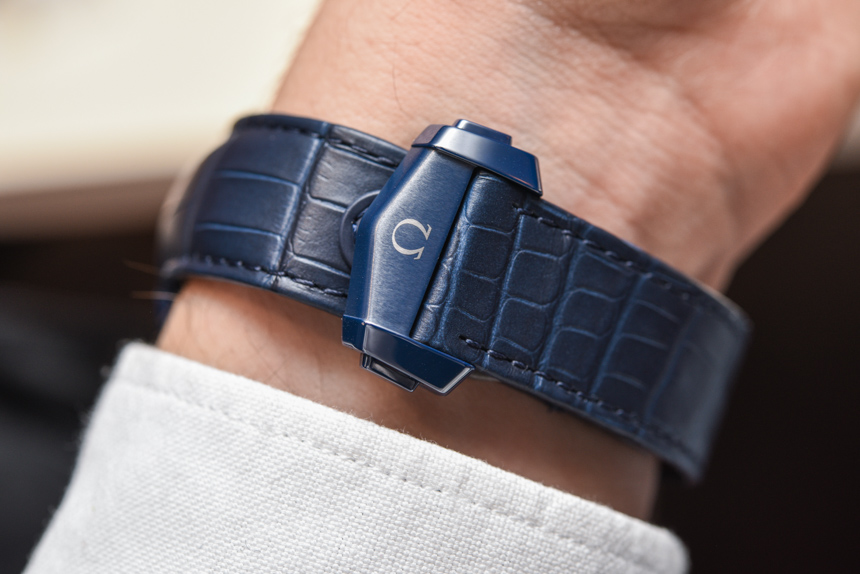 Omega matches this watch with a blue alligator strap. I do think however, that if you are clever, you could pair the Blue Side Of The Moon with a brown or possibly a deep gray strap as well. Omega’s struggle will be to recapture collector’s hearts who originally fell in love with the Speedmaster Dark Side Of The Moon, and have them put down the same money on the admittedly similar but not as innovative-feeling Blue Side Of The Moon. In blue, the watch adds a legitimately delicious new flavor, but at the price of a very fine delicacy. 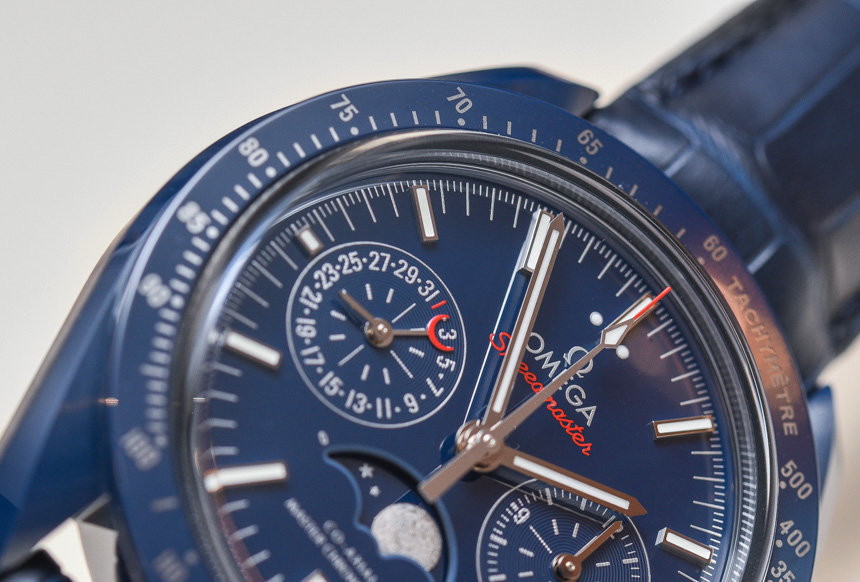 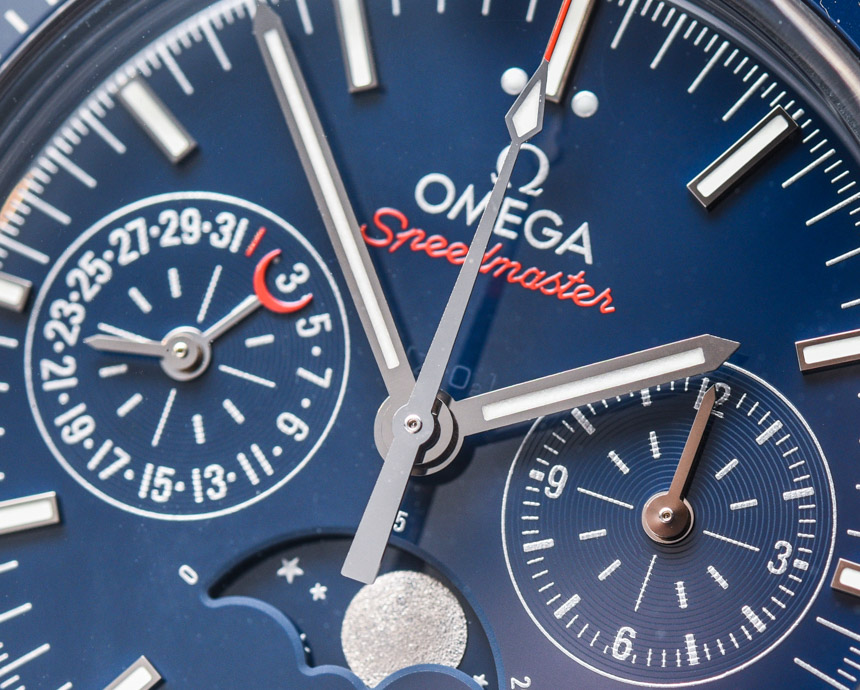 Omega continues to excite us with fashionable variations of their nicest products (such as a blue ceramic Speedmaster Moonphase), but the question remains if the current average Omega consumers want something a bit more conservative from the brand. Omega guys tend to be the type who save up for a really nice Omega, even if their typical budget is limited. They can’t get every pretty Speedmaster or Planet Ocean variation that comes out – even if they want to. 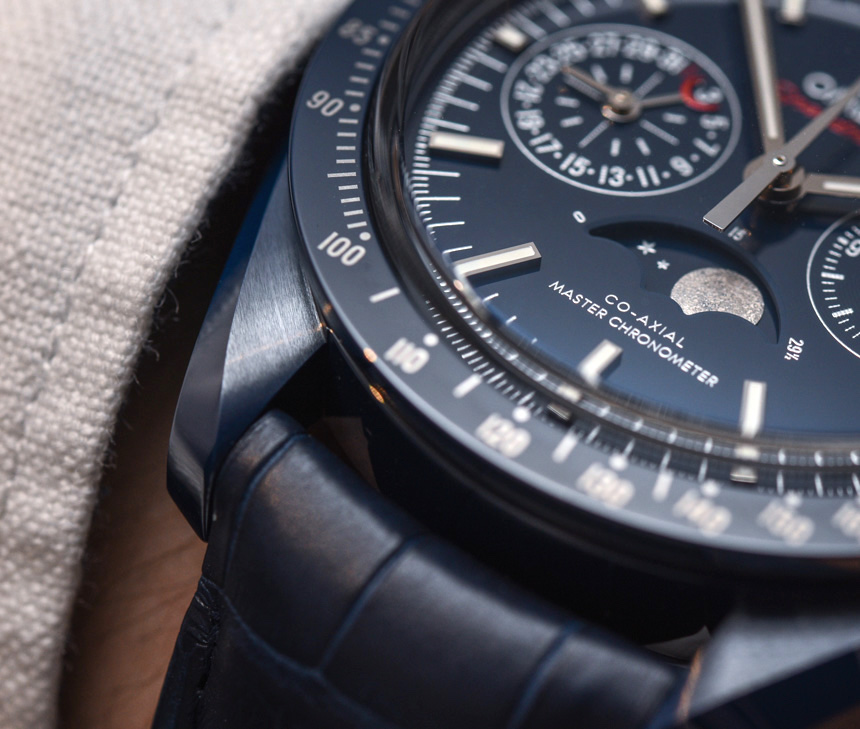 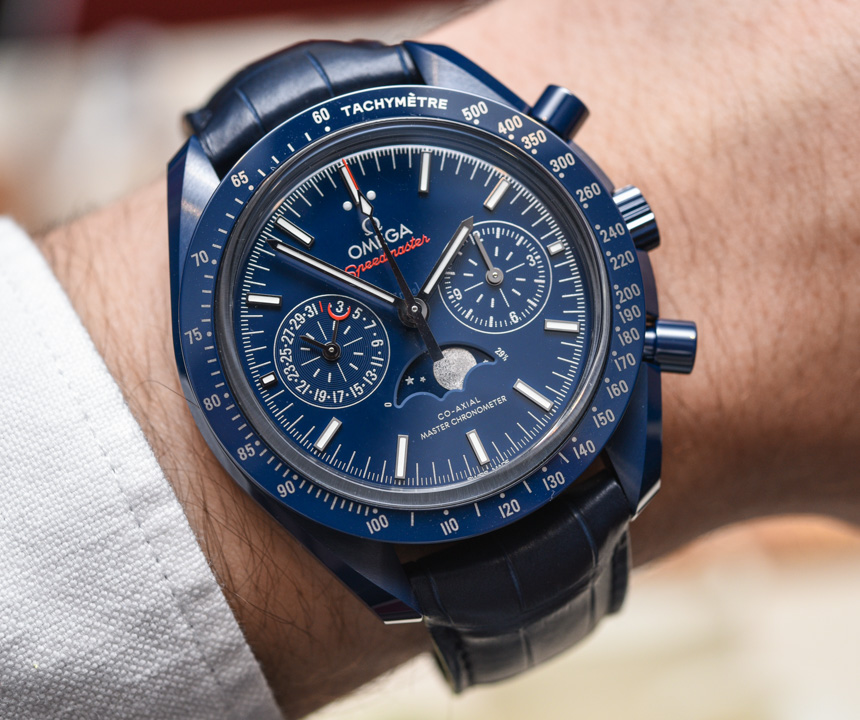 With that said, Omega does need new model variation each year – I just wish it didn’t have to cost so much to spice up your collection while enjoying a familiar look and a great tool watch. The Omega Speedmaster Blue Side Of The Moon Co-Axial Master Chronometer Chronograph Moonphase is the reference 304.93.44.52.03.001 and has a retail price of 11,700 CHF. omegawatches.com