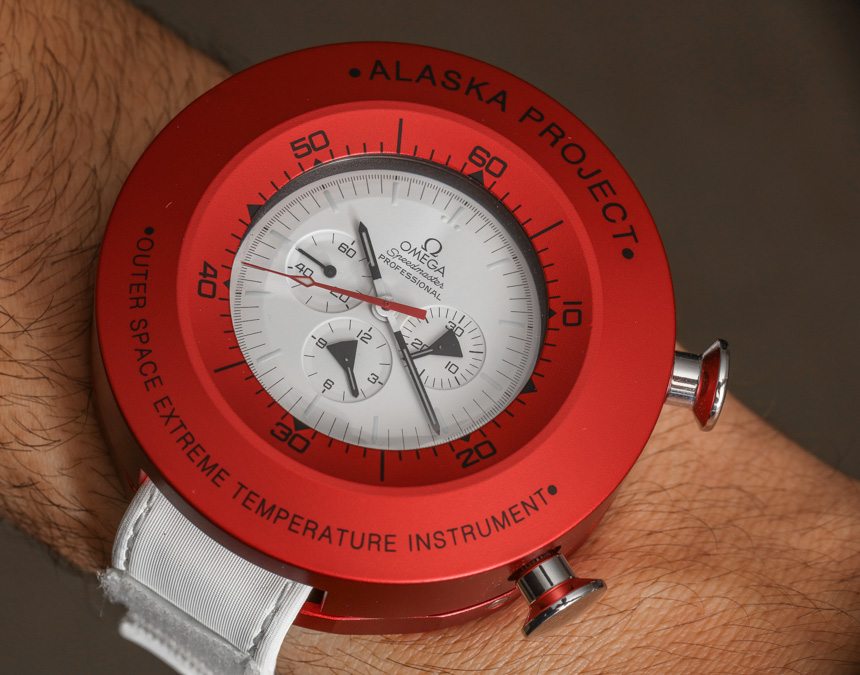 The overall design of the Omega Speedmaster Moonwatch Alaska Project dial was not only meant to stand up to things like radiation and light better, but was also supposed to improve on the legibility of the Speedmaster dial. It was apparently found that white-dialed sport watches fare better in both bright and dim lighting conditions, and the “space landing pod”-style chronograph subdial hands were intended to help make reading the subdial registers faster and more easy (I think it works). Perhaps this is one of the reasons why I like white-dialed sport watches so much – I do actually find them easier to read… and everyone that knows my watch tastes knows I am fanatically into legibility. It isn’t the only modern watch to have an acrylic crystal, but it is one of the few. Actually, the look of these is nice assuming you don’t scratch it up. Scratch tolerance is perhaps the major downside to acrylic crystals, but otherwise they offer a nice “warm” view into the dial and are cheap to replace in addition to being more or less shatter-resistant. Pretty much all other Speedmaster (as well as other modern high-end) watches have sapphire crystals. Again, for “tradition’s sake,” Omega continues to produce the Speedmaster Moonwatches with acrylic crystals, and it just means that if you have one of these watches and wear it often, you’ll likely need to get a new crystal once in a while. I hope that replacing them is still cheap. It used to cost less than $100 (the part itself was about $30 the last time I checked). Omega continues to produce the core Speedmater Moonwatch with the caliber 1861 manually wound chronograph movement. NASA (at the time) wanted a manually wound movement because they were concerned that in the zero-gravity environment of space automatic rotors would not really do anything. It was later found out that this concern was unfounded, and the kinetic energy of moving your wrist around in space was enough to keep a watch wound via an automatic rotor. I am not sure when this was proven, but it was reaffirmed when Seiko put its Spring Drive Spacewalk timepiece into space around 2008 – ironically, the same year that the limited edition Omega Speedmaster Moonwatch Alaska Project was released. The caliber 1861 movement is otherwise nice, even though it needs to be manually wound. It operates at 3Hz (21,600bph) and has a power reserve of 45 hours when fully wound. It’s a tough working and reliable movement, but it’s also based on generations-old mechanical movement architecture. It is a good place to start, but personally, for a daily wear I like a more modern automatic movement (as you can find in a host of other Speedmaster models). For me, the Omega Speedmaster Moonwatch Alaska Project is a cherished part of my collection, but it isn’t by any means a daily wear (it is more of an occasional wear that I look forward to donning from time to time). Like all Omega Speedmater Moonwatch models, the Alaska Project comes in a nicely sized 42mm-wide steel case that is 13.55mm thick and water resistant to 50 meters. How cool would it have been if Omega decided to make it in titanium? The case design is an enduring classic, and it looks good on just about anyone. It is also a great case because while it looks fantastic on the classic Speedmaster steel bracelet, the Omega Speedmaster case is one that looks great on a variety of straps only limited by the style and creativity of the wearer. I didn’t purchase the Omega Speedmaster Moonwatch Alaska Project because it was a collector’s item or because it was hard to find. I bought it because I really liked the design, was fond of white-dialed sports watches, and wanted to have an Omega Speedmaster Moonwatch without having the same thing as everyone else. There is something to be said for getting the unadulterated black-dialed original, but there is also something to be said for choosing from the wide range of limited editions that Omega has produced over the years. Omega Speedmasters are currently in a rather healthy collecting environment when it comes to both demand and prices. There is good reason for that, but I really hope that the market doesn’t get crowded by “speculators” looking for increasing values, only to cause an enthusiast-unfriendly bubble from occurring (more so than it is right now).

Necessary Data
>Brand: Omega
>Model: Speedmaster Professional Moonwatch Alaska Project Limited Edition reference 311.32.42.30.04.001
>Price: $5,600
>Size: 42mm wide
>Would reviewer personally wear it: Yes.
>Friend we’d recommend it to first: NASA and Omega history lover looking for an excellent white-dialed sports watch that exists as an uncommon expression of what makes the Speedmaster so great.
>Best characteristic of watch: Omega did an excellent job bringing back what was great about the incredibly uncommon and mostly not-for-sale Speedmaster Alaska Project models of the 1970s (not to mention the great story) for enjoyment today within the retro-themed Omega Speedmaster Moonwatch collection. White dial looks great and included accessories are very welcome.
>Worst characteristic of watch: White strap will inevitably get dirty with repeated wear. Aluminum case shield is cool but mostly a novelty item in terms of wearability. Omega should really have more white-dialed Speedmaster watches (a true panda dial!) as part of their regular collection.