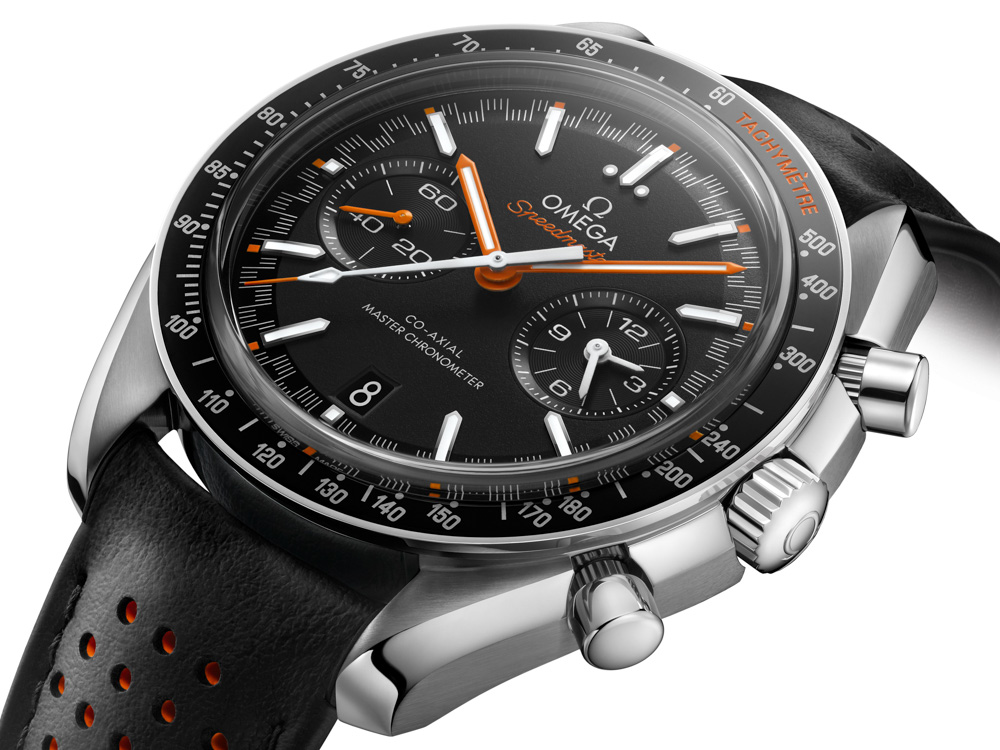 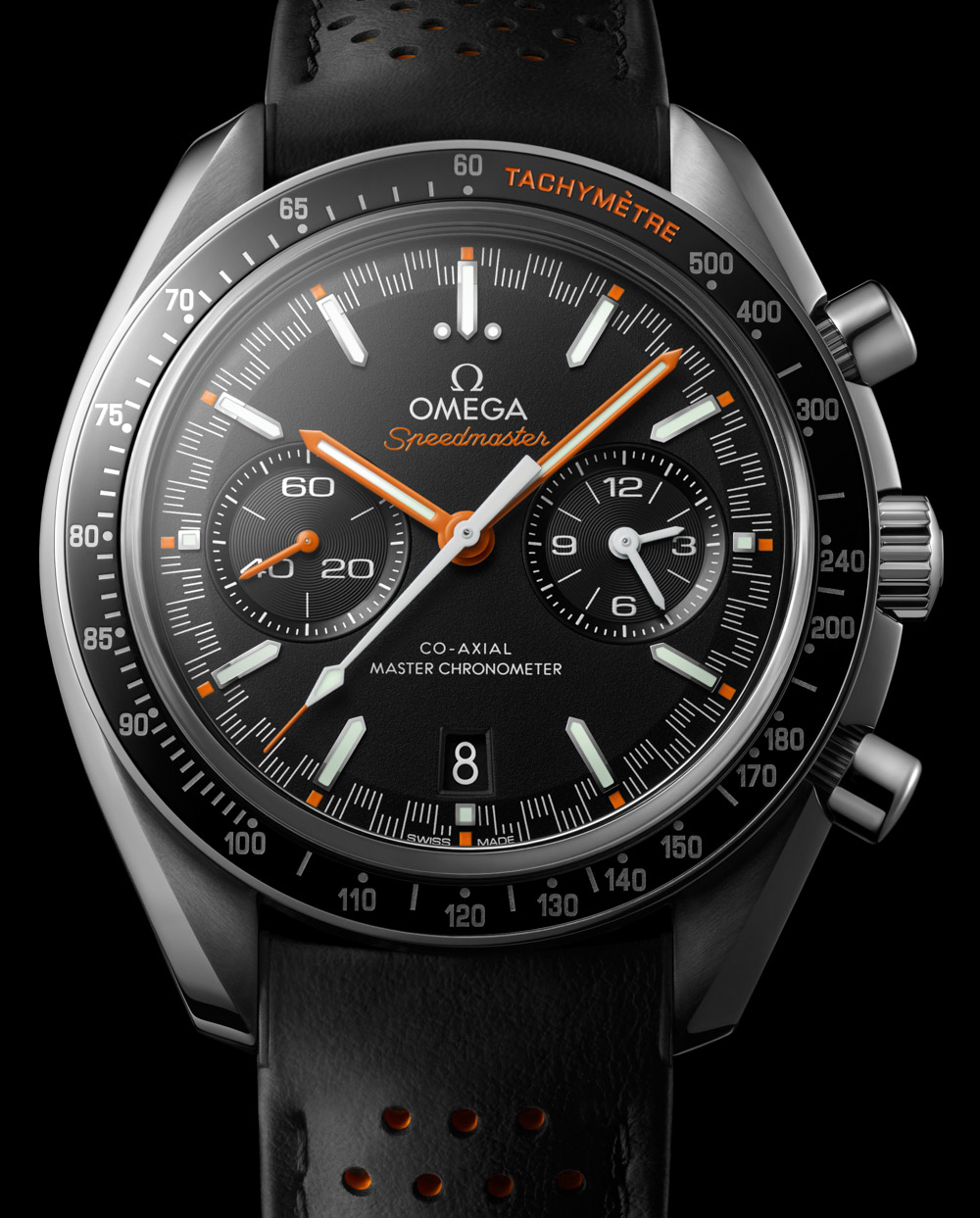 As a pre-Baselworld 2017 treat, Omega today announces a new flavor of Speedmaster with the Omega Speedmaster Moonwatch Automatic Master Chronometer watch that features a “racing dial.” With accents in sporty orange and the distinctive style of minute track associated with popular historical models, its vintage-inspired looks are backed up by a movement with Omega’s latest technology. It’s like a Moonwatch but with an auto racing twist. 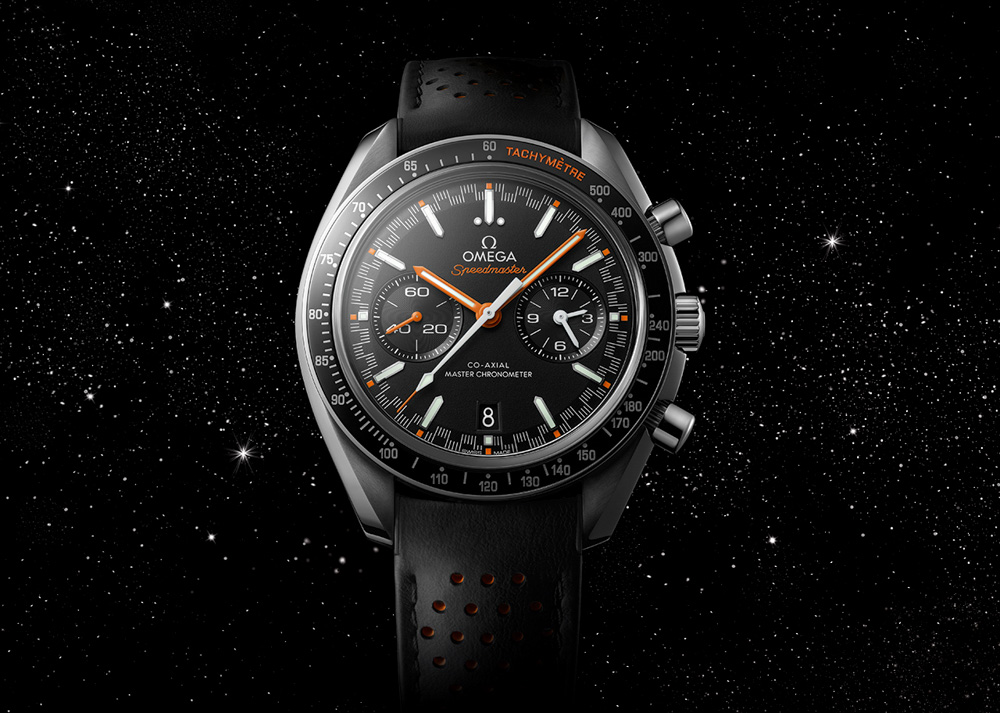 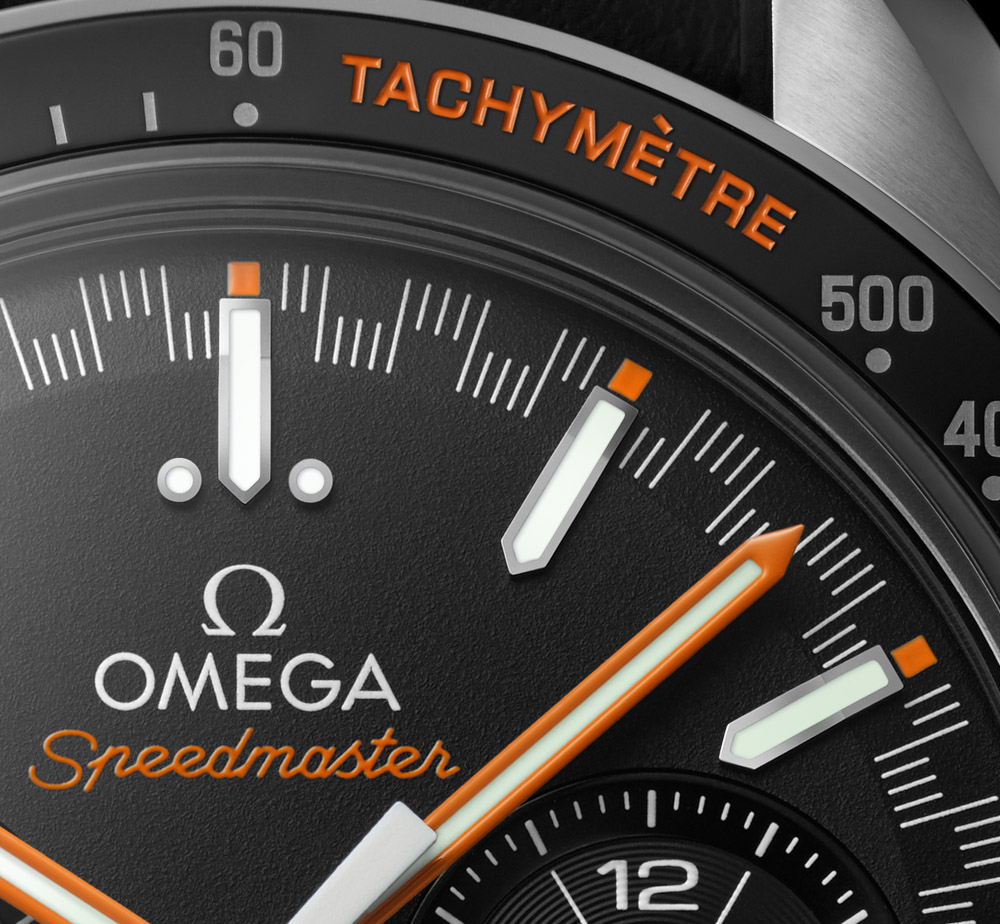 The alternating pattern of the minute track comes first from a 1968 Speedmaster model and has since featured on many racing-related Speedmasters, but fewer modern ones. Some of the old Michael Schumacher Speedmasters come to mind for me, as well as the more recent Speedmaster MKII. It’s a charming touch, for sure, and shows that Omega knows and pays attention to its collectors. 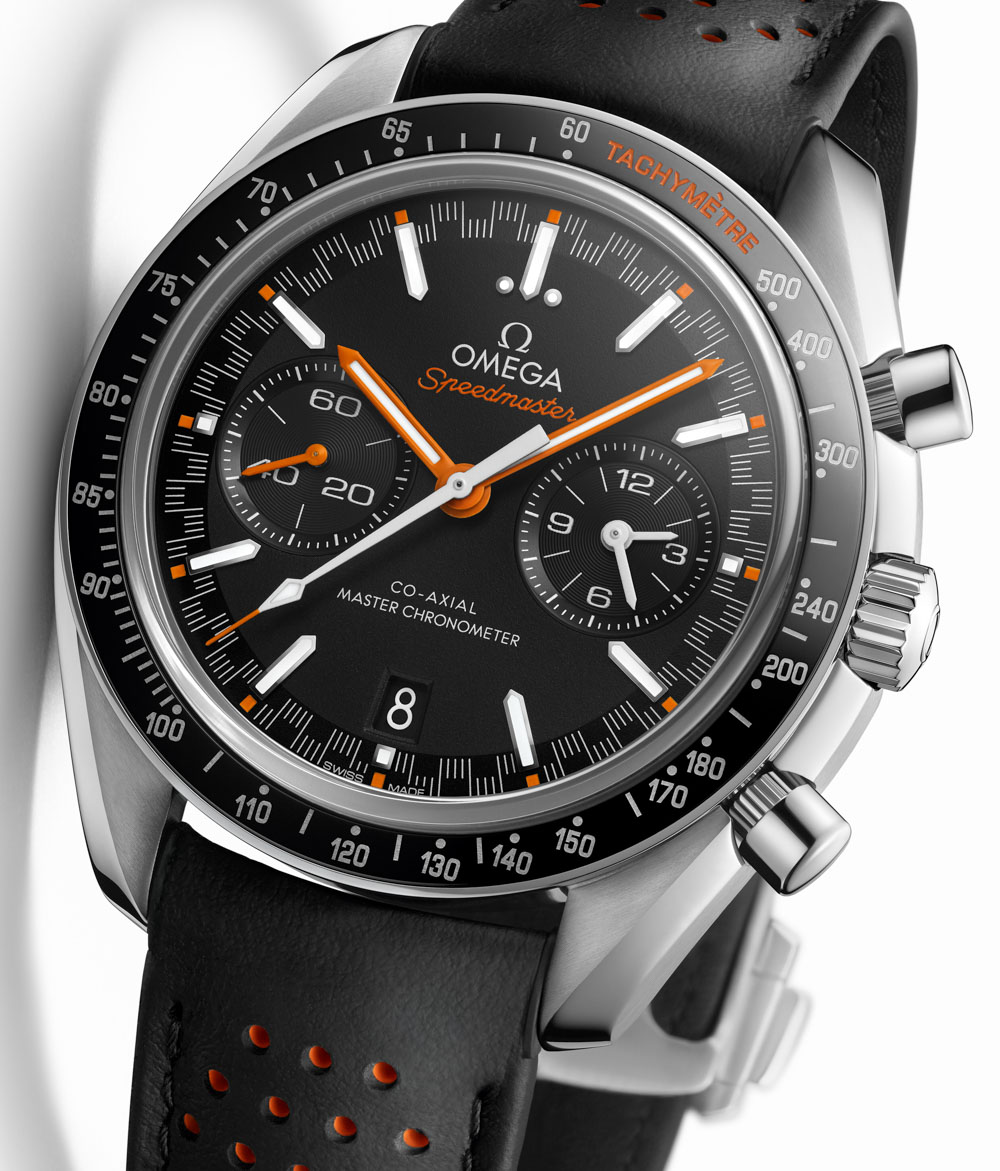 The Omega Speedmaster Moonwatch Automatic Master Chronometer watch has a 44.25mm steel case that Omega says has a thinner profile due to “work done on the sapphire crystal.” Other subtle changes include the slightly enlarged subdials for improved legibility. We expect good legibility from Omega as well as a good lume experience, and white Super-LumiNova on the hands and the beveled 18K white gold arrowhead indexes should provide that. The orange accents on the dial extend to the orange wording on the polished ceramic bezel (with brushed “Liquidmetal” tachymeter) and then to the holes in the perforated leather strap that reveal orange rubber underneath. The varnished orange hands, though, are my favorite part. 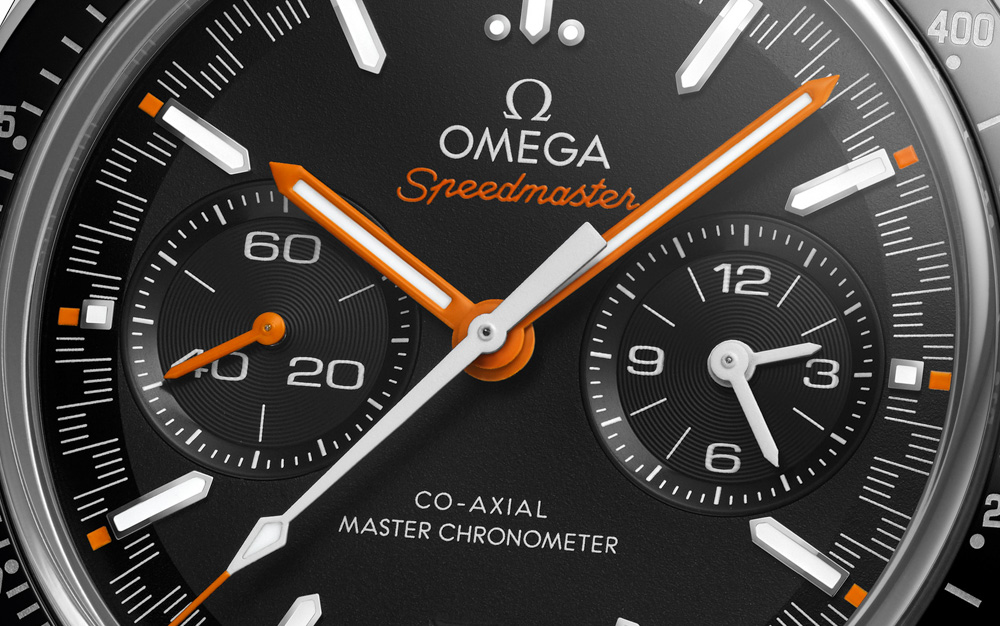 The automatic caliber 9900 movement inside was introduced in the Omega Seamaster Planet Ocean last year at Baselworld 2016 and was the first chronograph movement with Omega’s new METAS certification. The 9900 operates at 4Hz with a 60-hour power reserve and the Master Chronometer designation promises that it is accurate to between 0 and +5 seconds per day, as well as resistant to magnetic fields up to 15,000 gauss. No caseback images from Omega for now of the Omega Speedmaster Moonwatch Automatic Master Chronometer, but the 9900 movement is also fantastic to look at. 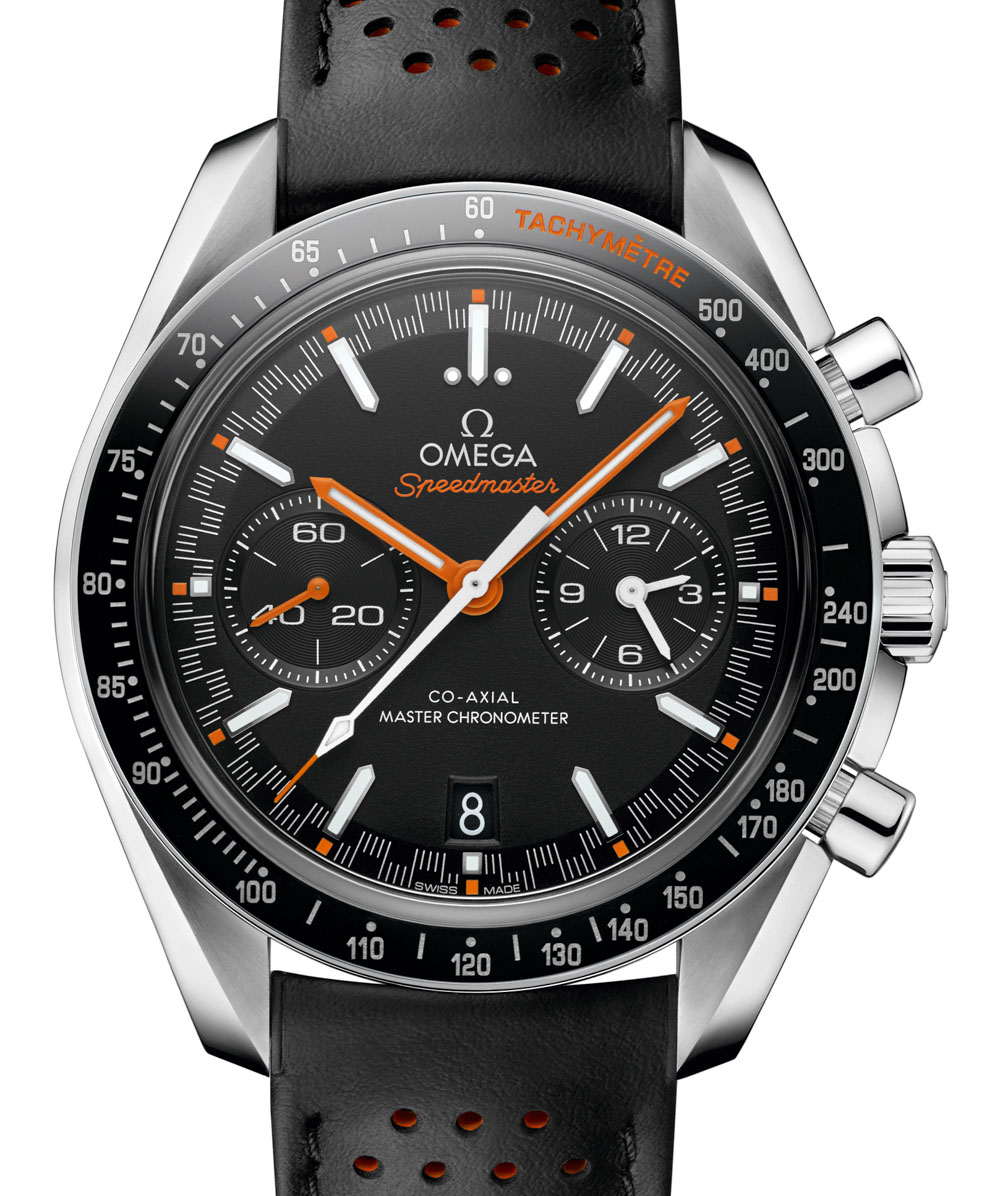 Omega says this is the next generation of Speedmaster, and we are getting the sense that they will be giving the line a lot of attention this year, as today’s announcements follow this Tuesday’s Omega Speedmaster “Speedy Tuesday” Limited Edition release. So stay tuned for more. Omega is confirming the price of the Omega Speedmaster Moonwatch Automatic Master Chronometer watch and we will update the article as soon as we have that information. omegawatches.com