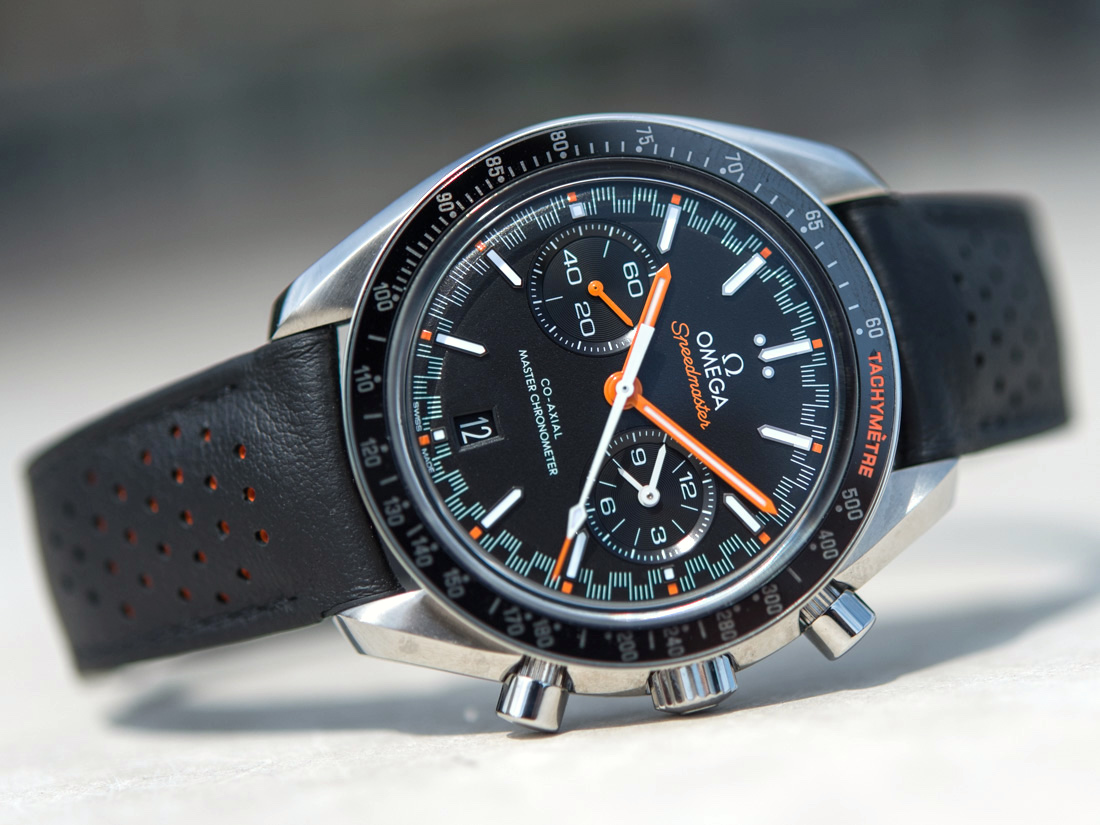 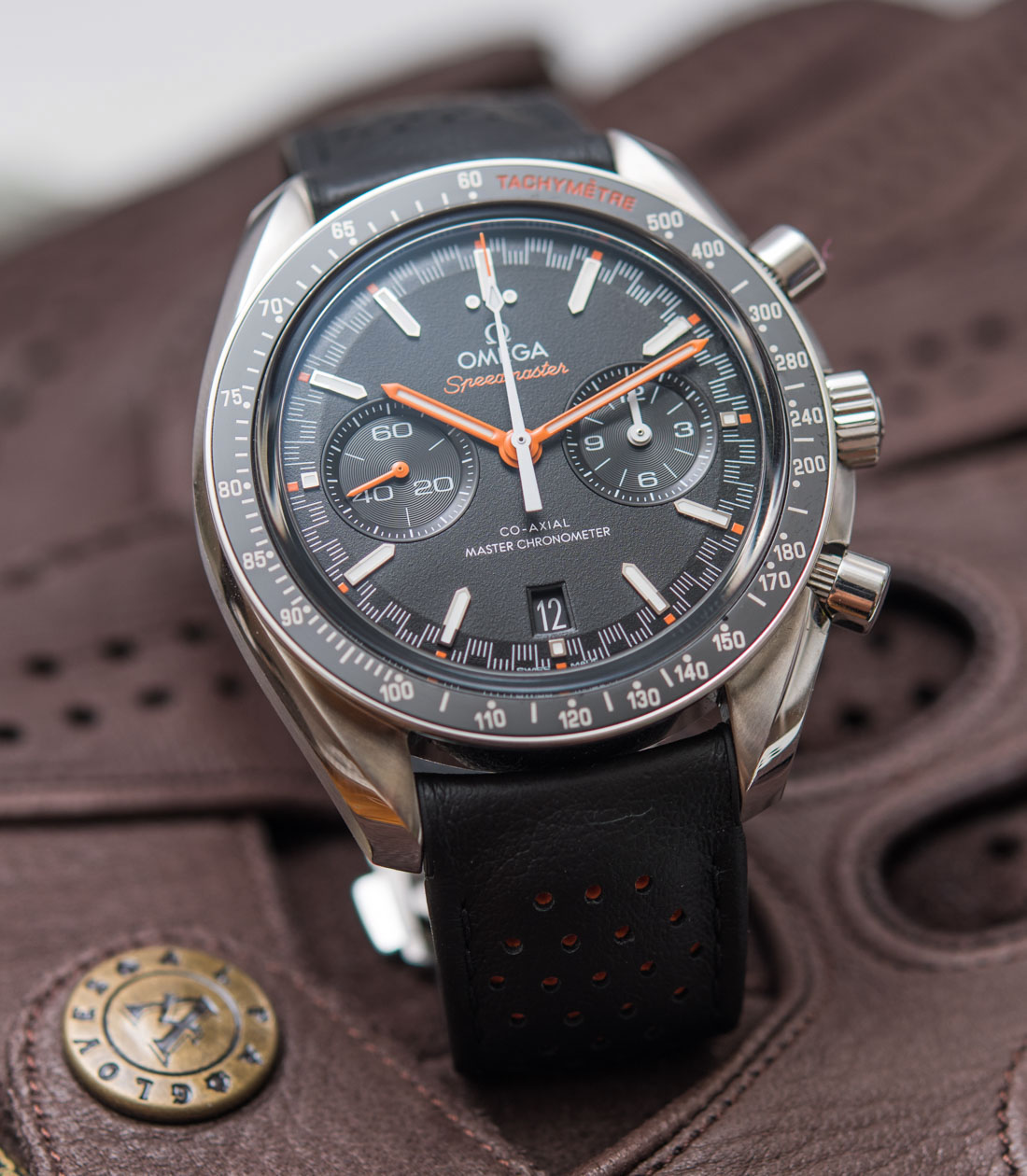 The overall design, as a consequence of all these elements, is one that, at last, is far from boring, but I wouldn’t call it desperately over the top either. Tastes differ, but if you want a steel-cased, modern Speedmaster that steps away from the regular monochrome/basic aesthetic, I strongly believe the Speedmaster Racing adds just enough to the mix to make it much more lastingly interesting, without compromising wearability or the seriousness that is rightfully expected from a watch that many are eyeing as their only watch that they wear every day of the week.

Apart from – possibly exclusively my personal – issues with the minute track’s legibility, the Speedmaster Racing is one exceptionally handsome looking watch that balances well between spicing things up and remaining perfectly wearable on an everyday basis. Many try but just a fraction of recent big-brand-releases pull this off so neatly. 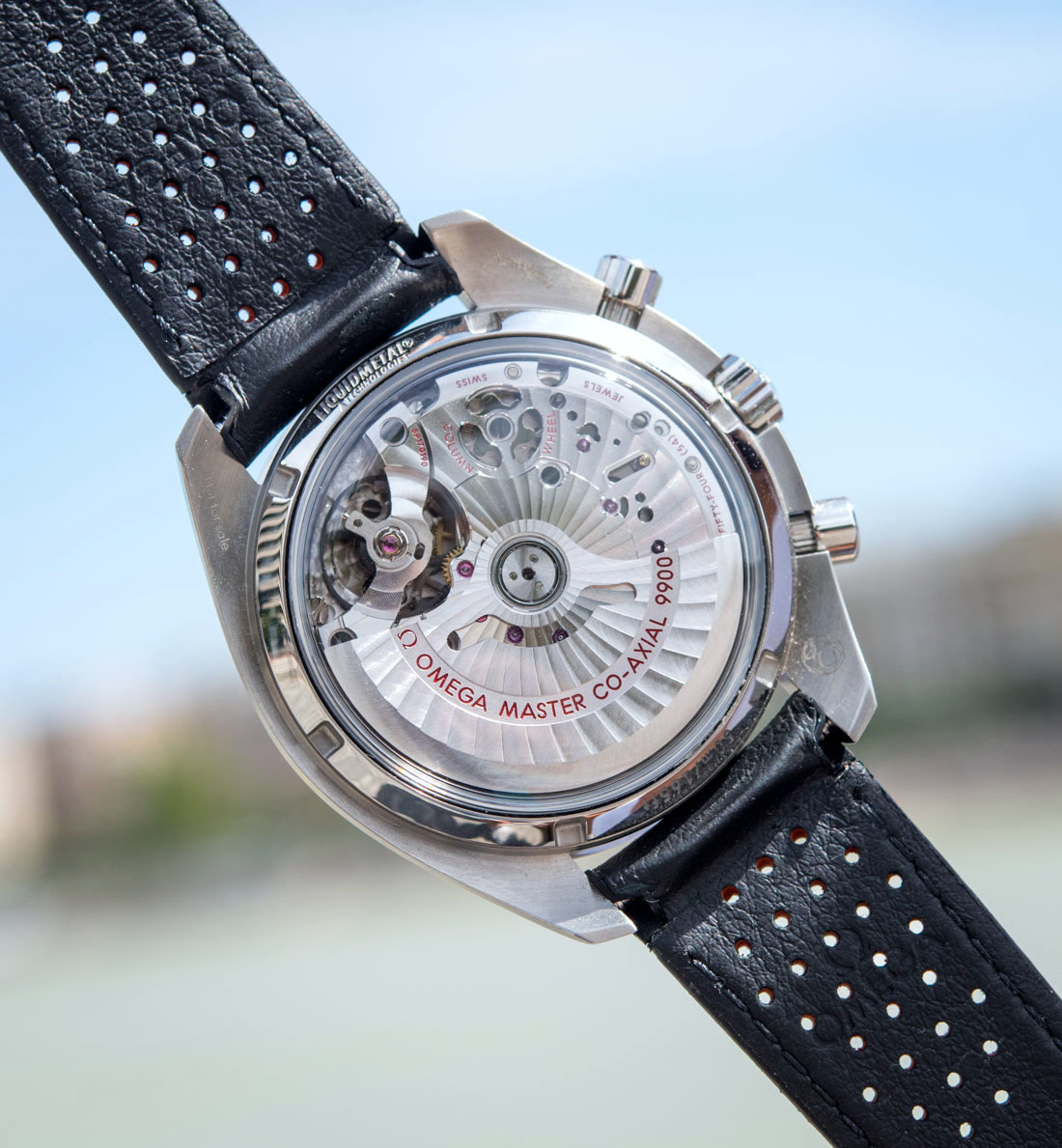 The Caliber 9900 (and 9901 with gold rotor and bridges in gold cased versions) is the latest and greatest Omega can do with a movement. It is an automatic chronograph equipped with a column wheel, a vertical clutch, two barrels, and a Co-Axial escapement with silicon parts and an operating frequency of 4Hz. 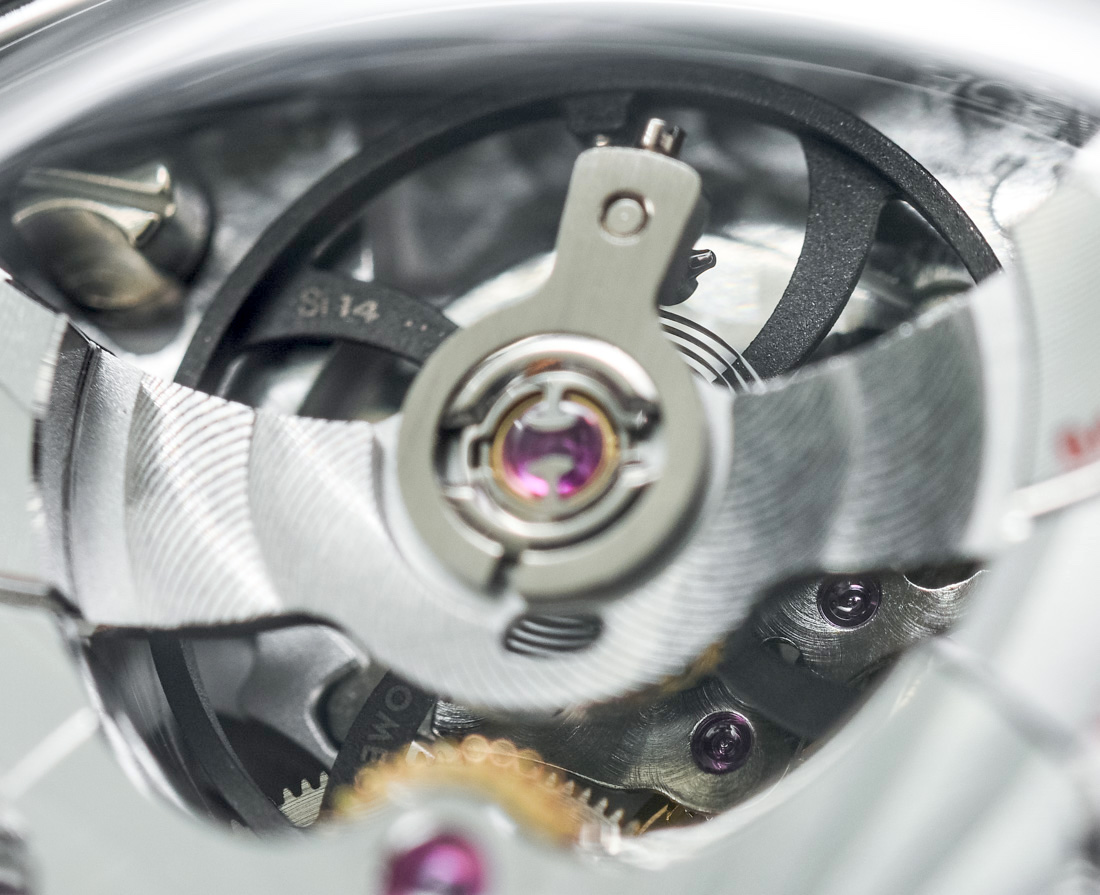 The “Master” in the name of the watch – let it be Co-Axial Master Chronometer or Omega Master Co-Axial – refers to this movement as well as the completed watch passing Omega’s extremely thorough in-house quality control procedure, certified by METAS. METAS is the Swiss Federal Institute of Metrology, they are responsible for the dissemination of the official time in Switzerland and, as a federal institute, they certify countless important projects linked to measuring stuff. Additionally, as a federal institute, they are of course independent from Omega. 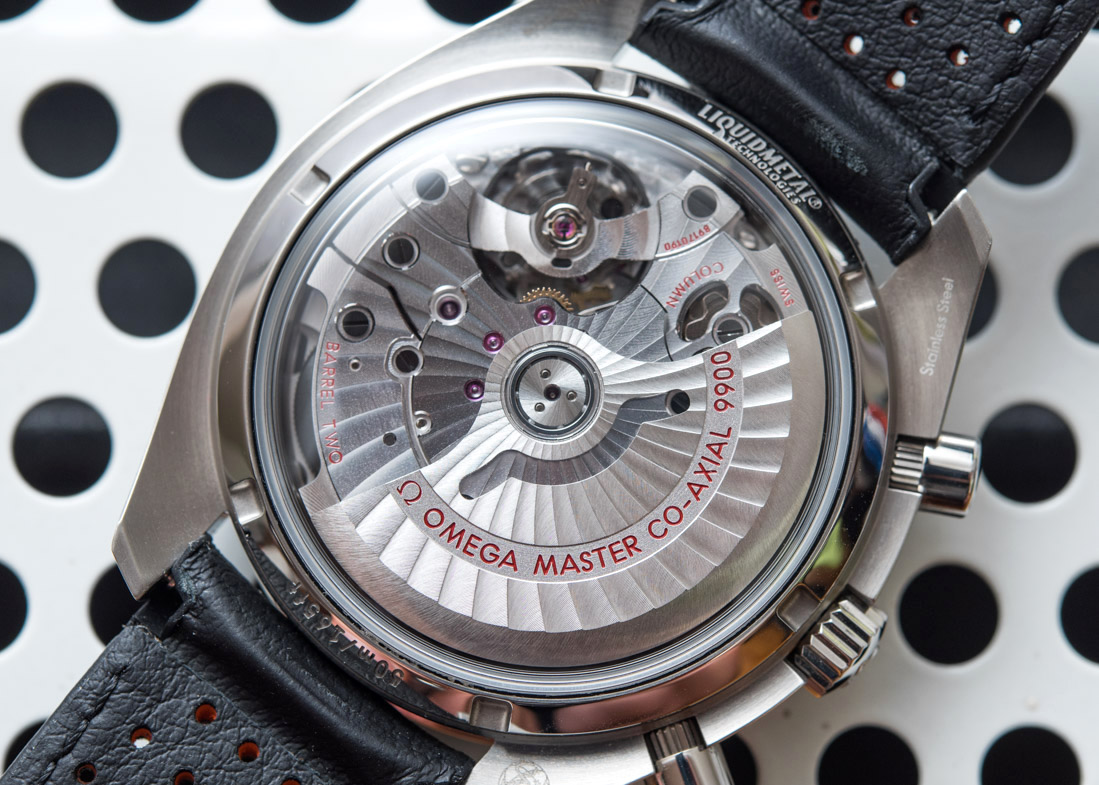 A common misconception is calling the watches METAS-certified. METAS certifies Omega’s testing procedures and the equipment used for it. The institution insisted on having an independent office in the Omega manufacture right where the testing happens which allows them to conduct random tests and inspections. 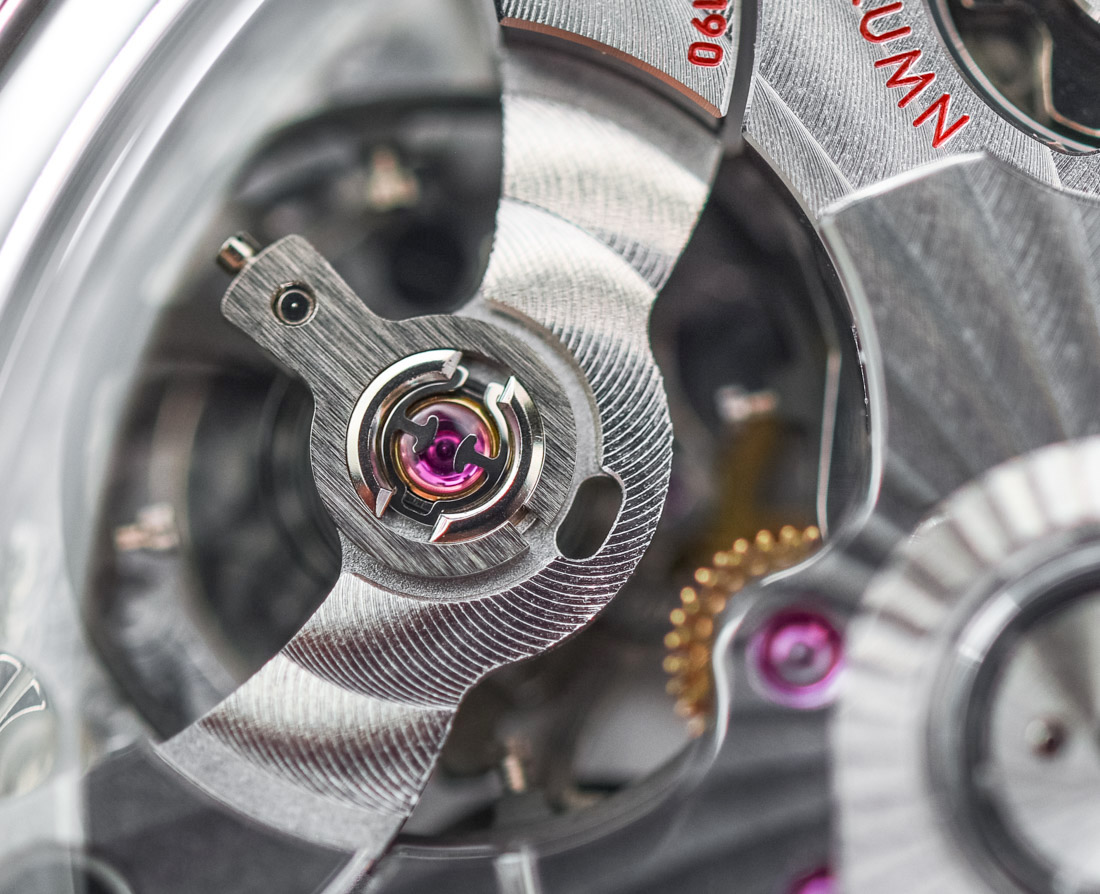 Omega’s METAS-certified Master Chronometer tests include 8 steps which are preceded by Omega first sending its to-be Master Chronometer movements to COSC for chronometer certification testing. Then the 8-step progress begins which involves several tests concerning timekeeping performance, first conducted on uncased, then cased-up movements, in 15,000 Gauss magnetized and demagnetized states, as well as at 100% and 33% power reserve. Lastly, water resistance is checked under water. We’ll have a complete run-down on these tests in a separate article because it sure merits one. 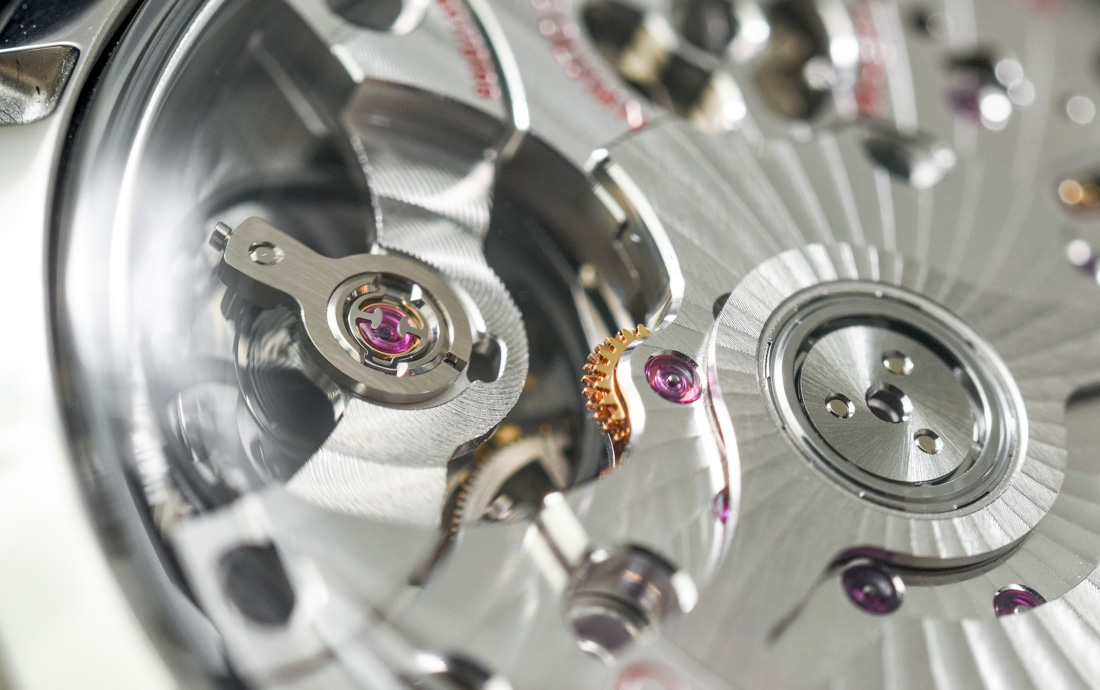 The 9900 movement looks stunning and – now priced under $8k – this is among the nicest looking movements at this price point. It is machine decorated, but done in a decent way: excessively detailed, reaching even difficult to see places like the plates deep under the balance wheel and finished off in a silver-purple-green hue that depends on lighting and that is rarely encountered elsewhere. 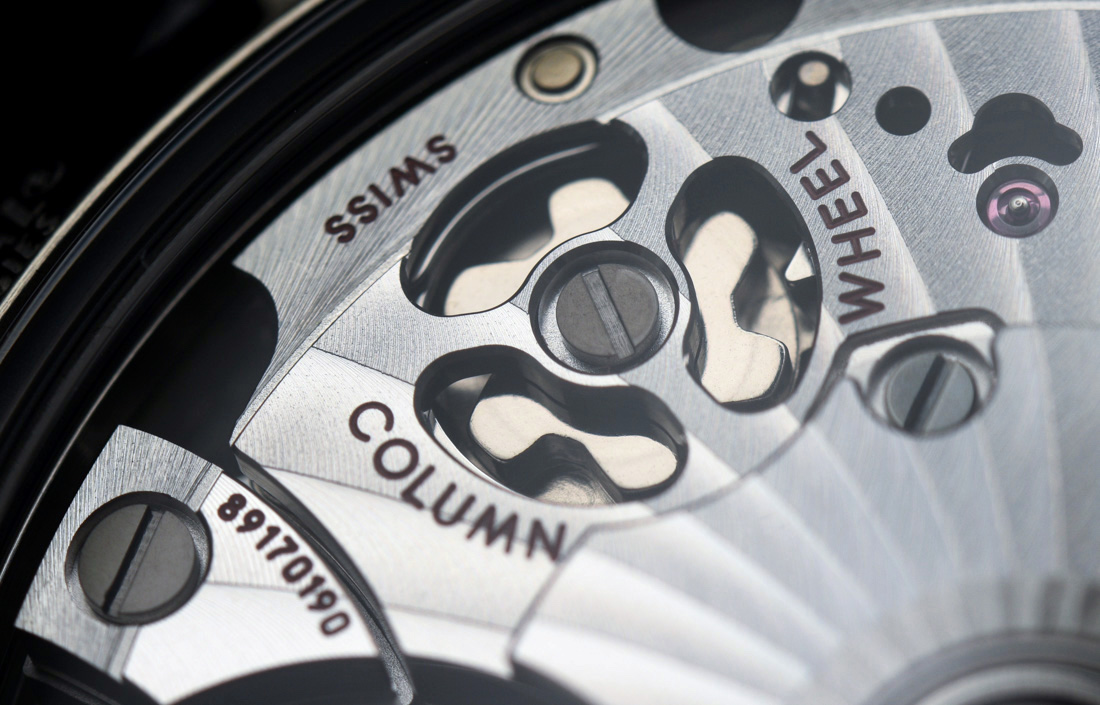 The vertical clutch means there are no coupling-decoupling chronograph wheels to elevate the show, but the curved striping on the icy silver looking rotor and plates still offer plenty of candy for the eye. Dark grey screws and intelligently placed, variously sized texts in red add a few splashes of color. For real nerds, the column wheel is on display neatly close to the large balance wheel, which in turn is hidden several levels into the movement. 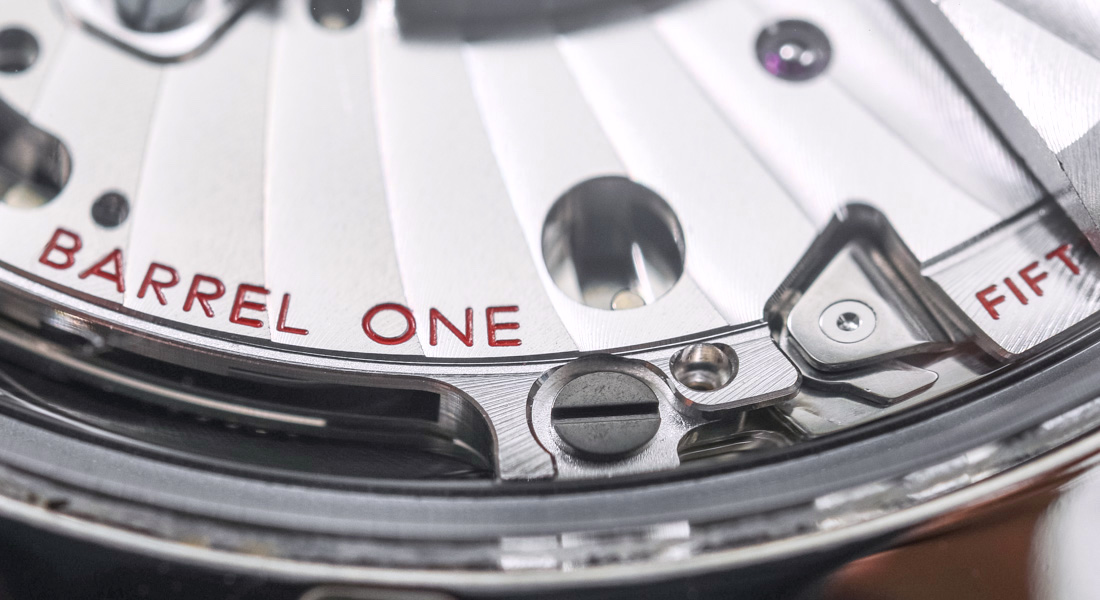 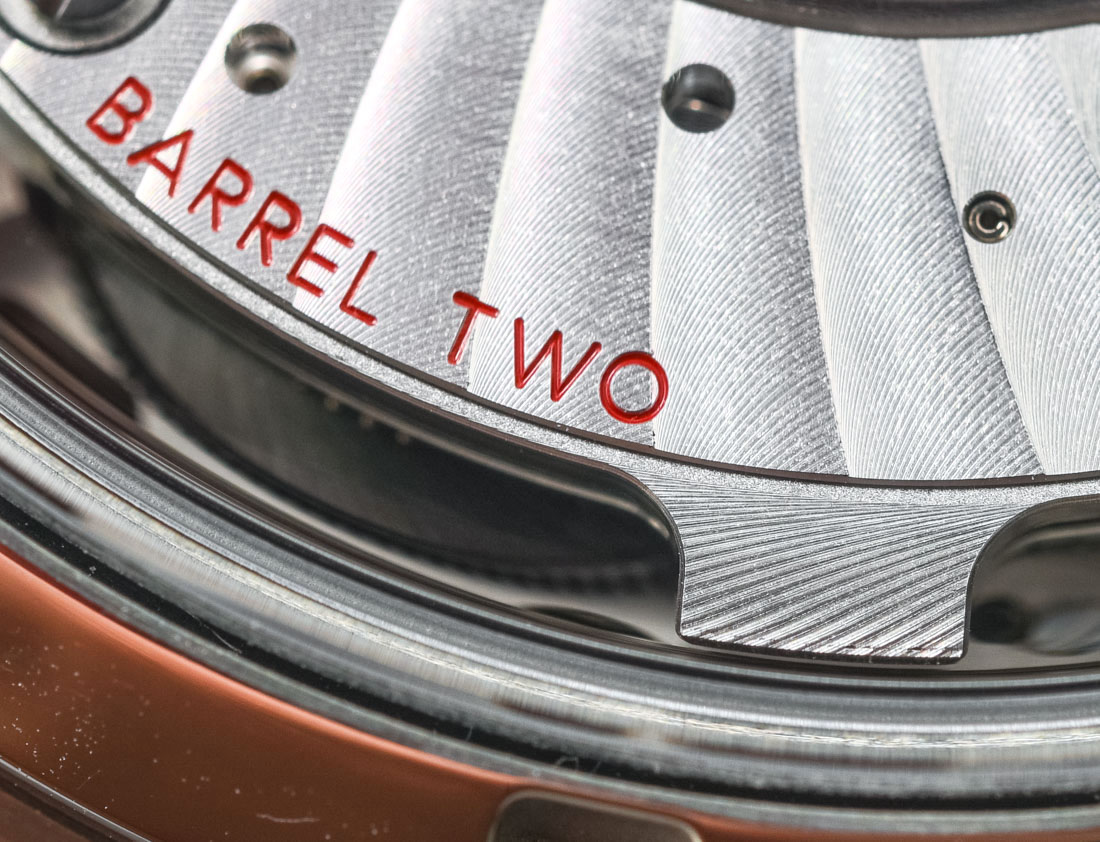 Good points are deserved by the totally silent operation and the also inaudible or, at times very barely audible, automatic winding rotor. Pusher feel is good, if a bit unique, the piston-style pushers travel straight and give a supple clicky feedback always at the same depth. It’s what a well-engineered column wheel chronograph should feel like, and with the vertical clutch to boot, the chronograph seconds start and stop super smooth. Chronograph hours and minutes are displayed by two hands that run around the same, 3 o’clock sub-dial. 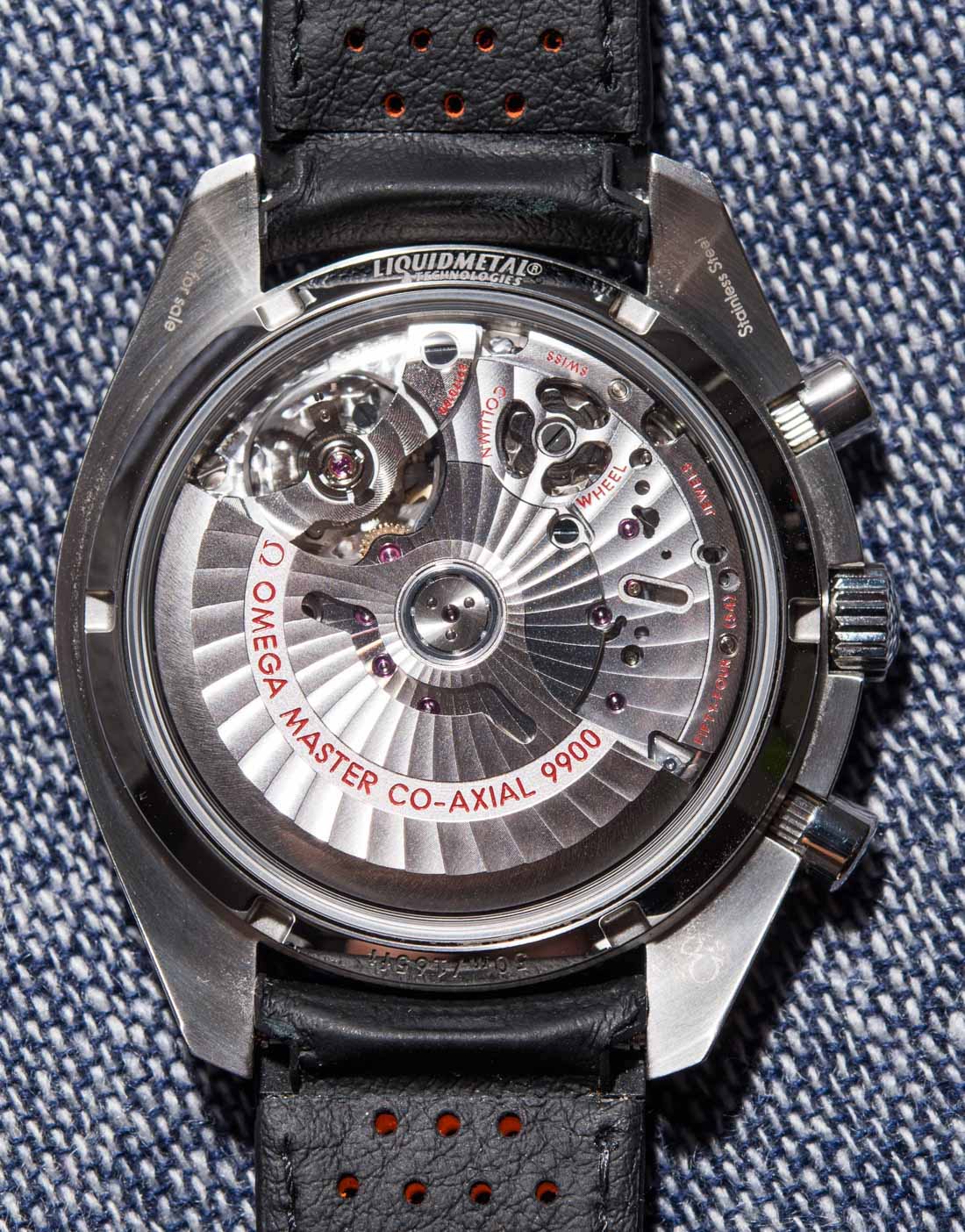 The Omega Caliber 9900 is one impressive movement. While I do wish it was a bit thinner, it has to be realized that this could only be achieved by losing the vertical clutch and possibly also the second barrel – and, in truth, I’d rather have these modern features than a watch that’s 2, maximum 3mm thinner. I mean, no movement engineer in their right mind would design a movement thicker than the thinnest it can possibly be. 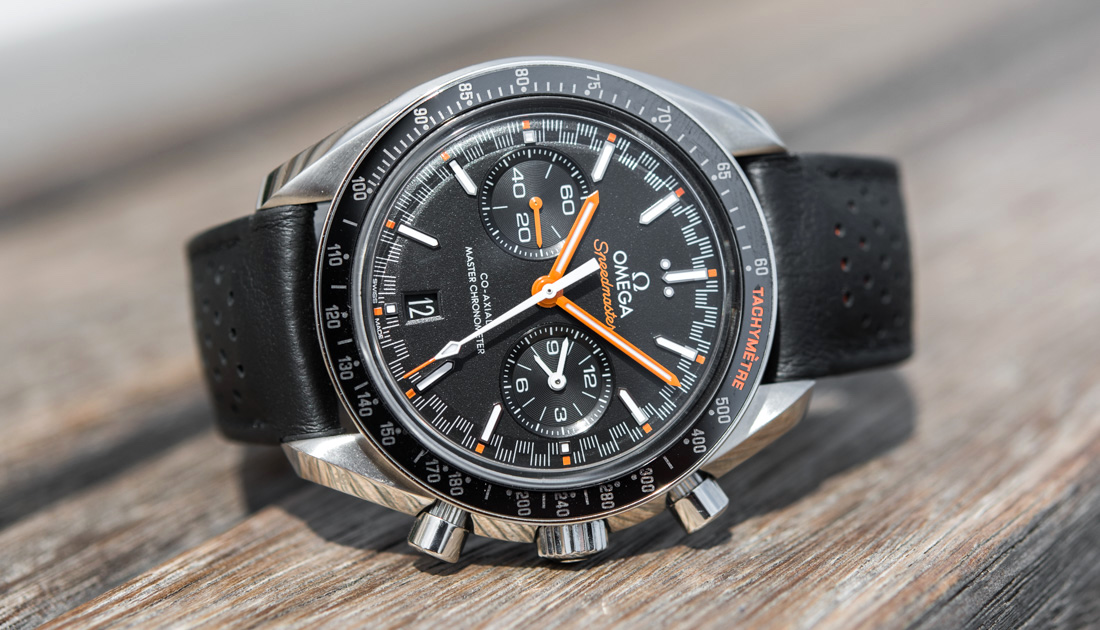 At times the evolution of a product can be just as noteworthy, as the launch of an entirely new one. With the Speedmaster Racing Master Chronometer Omega shows that it does actually care about improving and fine-tuning its watches both inside and out. The new movements are tested to an extent that is unique to Omega at the moment (and I doubt any major brand will get in this anti-magnetic game at a similar scale anytime soon), while the modern Speedmaster’s exterior has also been fine-tuned just enough. It’s one of the very few times in the luxury watch industry where a product has genuinely been improved both inside and out in a way that renders the wearing and owning experience a priority. I also appreciate the lack of historical BS when it comes to over-emphasizing the role of the racing dial. 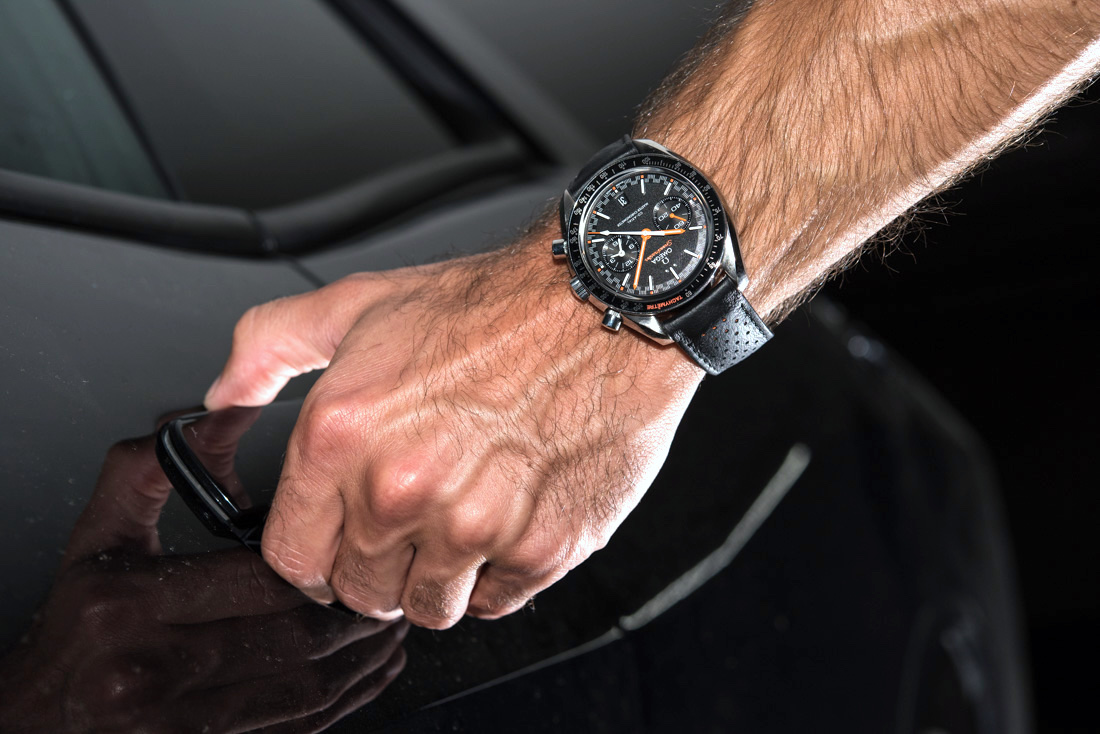 I remember when I first checked out this new Speedmaster Racing at Baselworld 2017. I very soon had the impression that this would be a great piece for a one-watch guy, who just wants something new but timeless that also works and looks alright. After having worn it for several weeks, it reassured me about that impression. I just wish every new offering from Omega (and all other major brands) would be as solid as this. 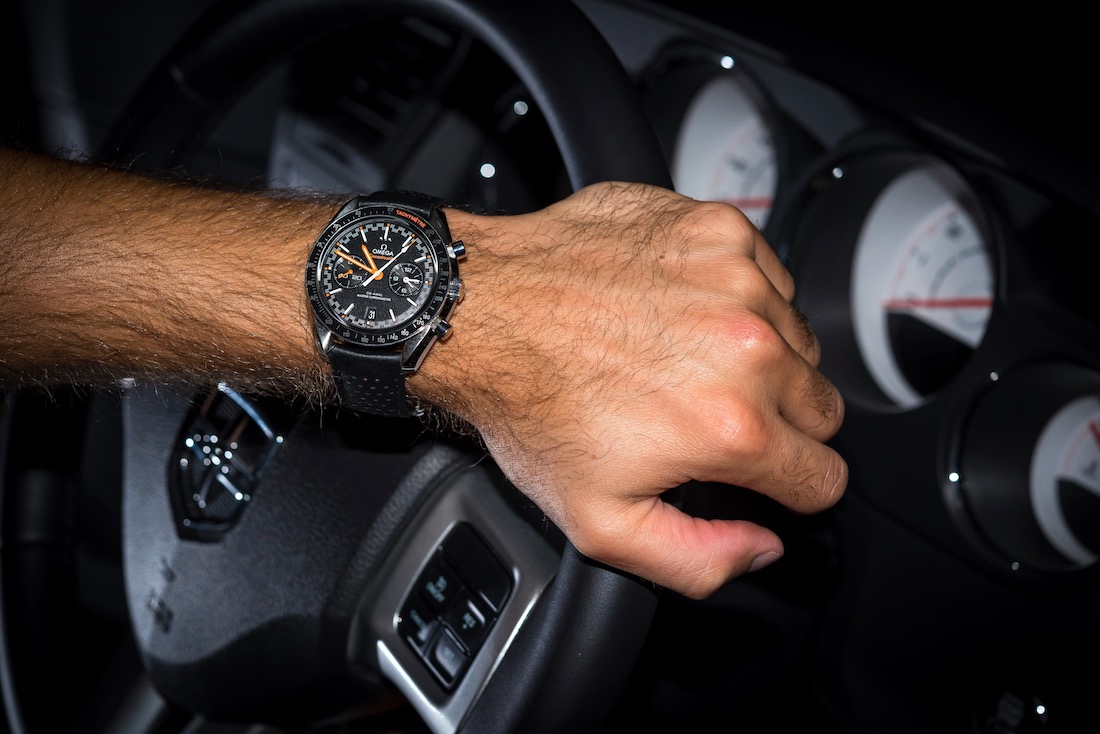 Price for the Omega Speedmaster Racing Master Chronometer reference 329.32.44.51.01.001 is $7,800, and the racing dial is also available on a Sedna Gold (Omega’s proprietary gold alloy that is appears close to red gold), with a blue dial and gold indices. omegawatches.com

Necessary Data
>Brand: Omega
>Model: Speedmaster Racing Master Chronometer reference 329.32.44.51.01.001
>Price: $7,800
>Size: 44.25mm wide
>Would reviewer personally wear it: Yes.
>Friend we’d recommend it to first: The one looking for one watch to wear everywhere, and who enjoys classic design, but is confident and comfortable in getting a modern iteration.
>Best characteristic of watch: Colors work absolutely great in real life, finally the styling is spot on without being stale and boring. Good wearability, stellar movement.
>Worst characteristic of watch: To-the-second legibility to me wasn’t great. Weird strap I wish was actual leather.