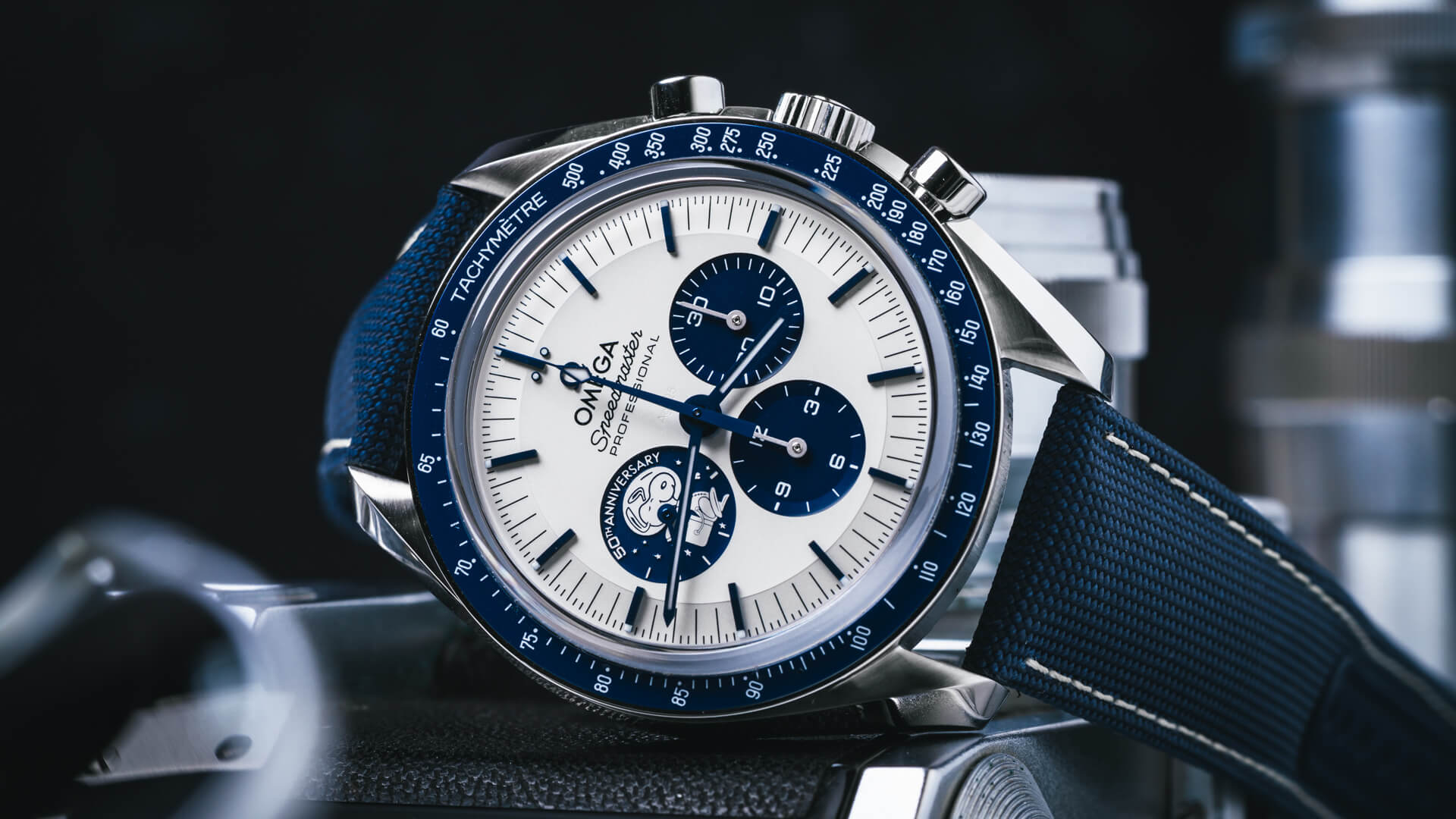 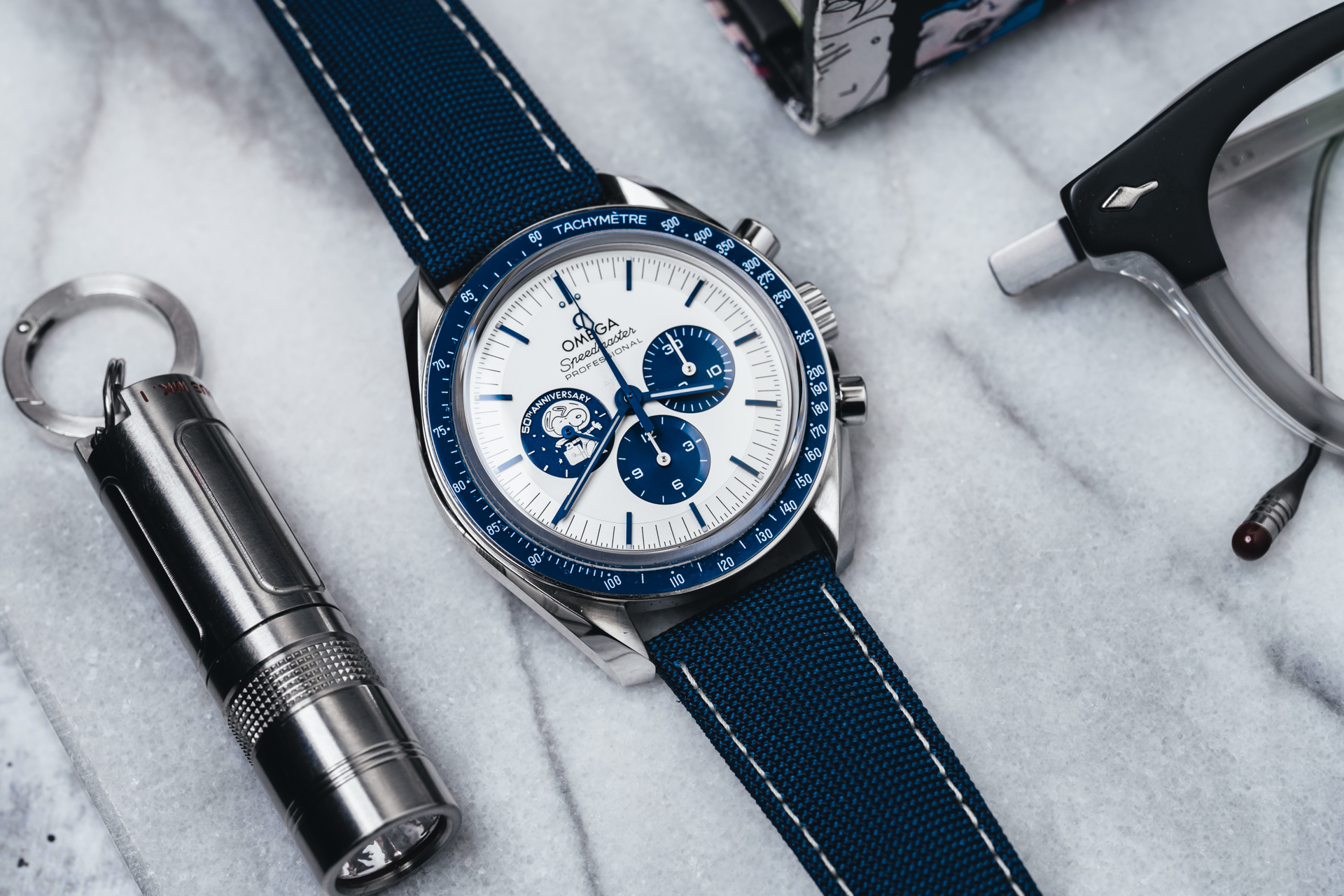 A watch should make you smile. It should put a little spring in your step. And for the lucky few, it might just do both as you find yourself glancing down at it throughout the day. But it’s a rare instance, indeed, when a watch mixes a sober horological legacy with state-of-the-art mechanical innovation — all with the expressed purpose of manufacturing joy. The Omega Speedmaster 50th Anniversary Silver Snoopy edition is the third in a whimsical trio of limited-edition Speedmasters that have each paid homage to a quirky NASA award (which was given to the Speedmaster after the watch was credited with helping save the astronauts of the doomed Apollo 13 mission back in 1970), each time yielding highly collectible, but markedly different, outcome. 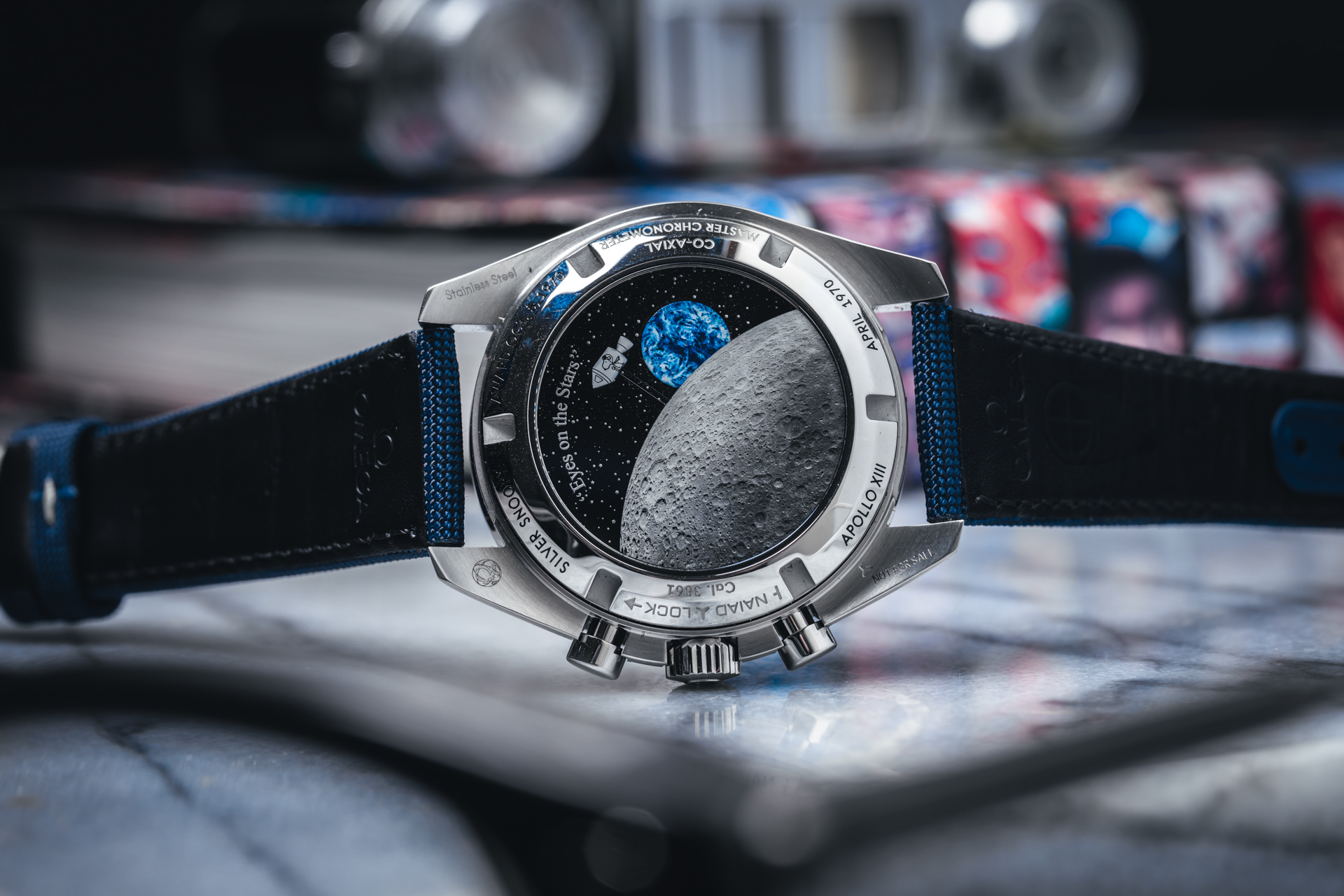 Unlike the first two editions, which paid tribute to the Snoopy award in the ways and means many special or limited-edition Swiss watches tend to pay tribute to something, this iteration eschews the traditional staid embellishments and goes in the entirely opposite direction, so much so that it feels like Omega finally gave itself permission to inject as much charm and whimsy into a single watch as possible. And I’m here to say that such a watch couldn’t have come along at a better time, in a year that we could all probably stand to have a little more reason to smile.

When I first read the press materials back in October, I had to do a double-take in the functional description, because it seemed to be suggesting that the caseback of this new watch was somehow animated, with Snoopy himself riding the lunar module in an arc across the moon? Well, all of that turned out to be 100% true, and it makes for one hell of a viewing experience when the watch is off the wrist.

At first glance when the watch is running, it’s clear that the highly detailed blue disc representing the earth is slaved to the inverse of the running seconds hand at 9 o’clock, which just like the seconds hand, completes one full rotation every 60 seconds. But the fun really begins when you start the chronograph and flip the watch over, as it’s here that Snoopy soon emerges from behind the moon and orbits the entire scene aboard the Command and Service Module, tracing a line under the now-classic Snoopy award motto “Eyes on the Stars” before disappearing back behind the moon, all in a span of 14 seconds. This, of course, is a nod to the 14 seconds it took for the Apollo 13 crew to use their Speedmaster watches to time thruster-bursts to course-correct after an oxygen tank on the service module exploded en route to the moon.

It took more than a fair bit of technical wizardry with Omega’s Co-Axial chronograph Calibre 3861 to make this all possible — part of which included using lightweight aluminum alloy for the hands, rather than the traditional heavier white gold found in many special Speedmasters, in order to enable the movement to be able to drive these two ultra-thin rotating elements, in addition to the center-mounted chronograph hand and running seconds hands, respectively. Not only is the animation super-neat, though, the background against which it is all set is also extremely detailed — from the twinkling stars to the staggering degree of detail executed on the surface of the moon foreground, using an industrial technique Omega calls “micro-structured metallization” – something we’ve seen before, but on a much smaller scale, when it was used to leave a tiny Buzz Aldrin footprint on the moonphase indicator of the current Master Co-Axial Speedmaster Moonphase watches. 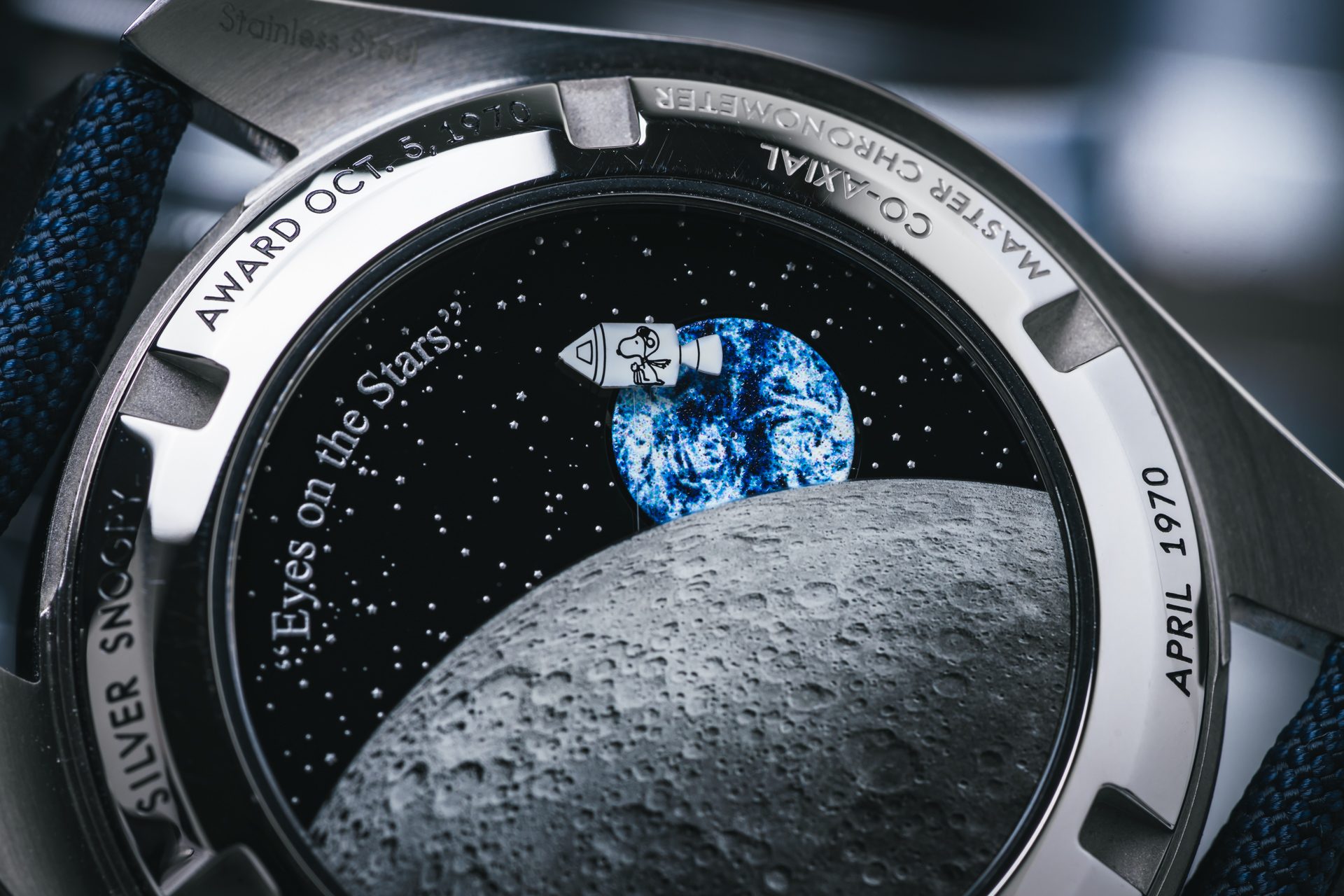 Now, if there were ever a reason to spend more time with what’s opposite the functional, time-telling side of the watch, it would absolutely be this one. But that’s not to say that the dial side isn’t equally a feast for the eyes. Rendered in AG 925 silver (a clever nod to the space-flown sterling silver lapel pin that comprises the NASA Snoopy Award itself) and encircled by a blue ceramic tachymeter bezel, the dial is fitted with bright blue hands and applied markers, the latter of which are finished small luminous plots at the rehaut. All the high-contrast blued elements set against a white or silver dial is one of Omega’s strongest limited-edition signatures, and one of the ways this reference differs itself from 2016’s Speedmaster CK2998, which used more tonal white gold hands and markers. 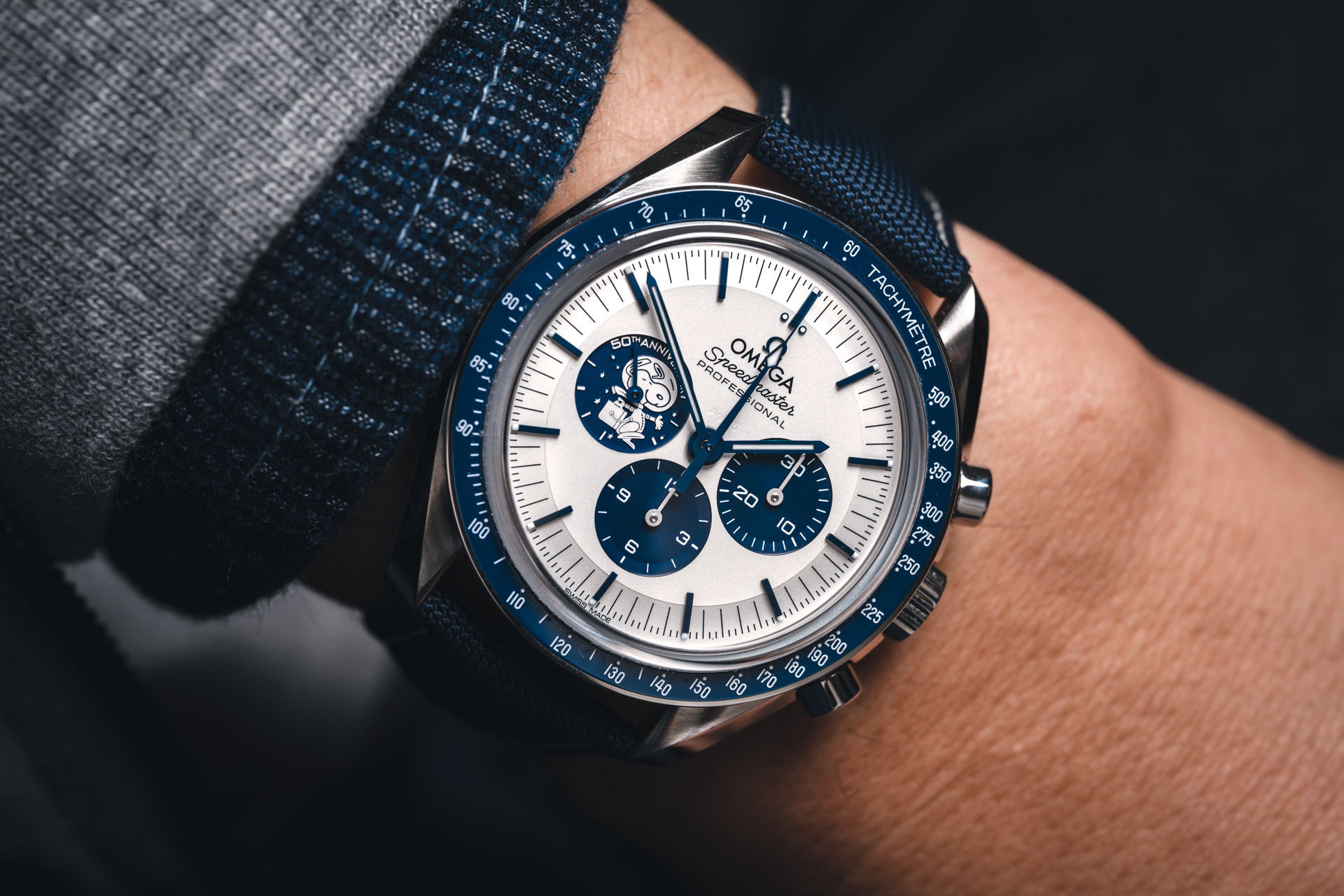 Rich blue hues aside, it’s a dramatic shift in tone from the cute, but arguably much more sedate, execution of 2015’s Apollo 13 Anniversary Silver Snoopy LE, which depicted a luminous silhouette of Snoopy literally asleep at the 9 o’clock register. It’s funny just how much Snoopy’s own physical depiction completely changes the vibe of the watch, but here we’ve got a very deep relief of Charles Schulz’s famous beagle in his signature dance, arms and ears akimbo, grinning ear to ear from within the confines of a space helmet. 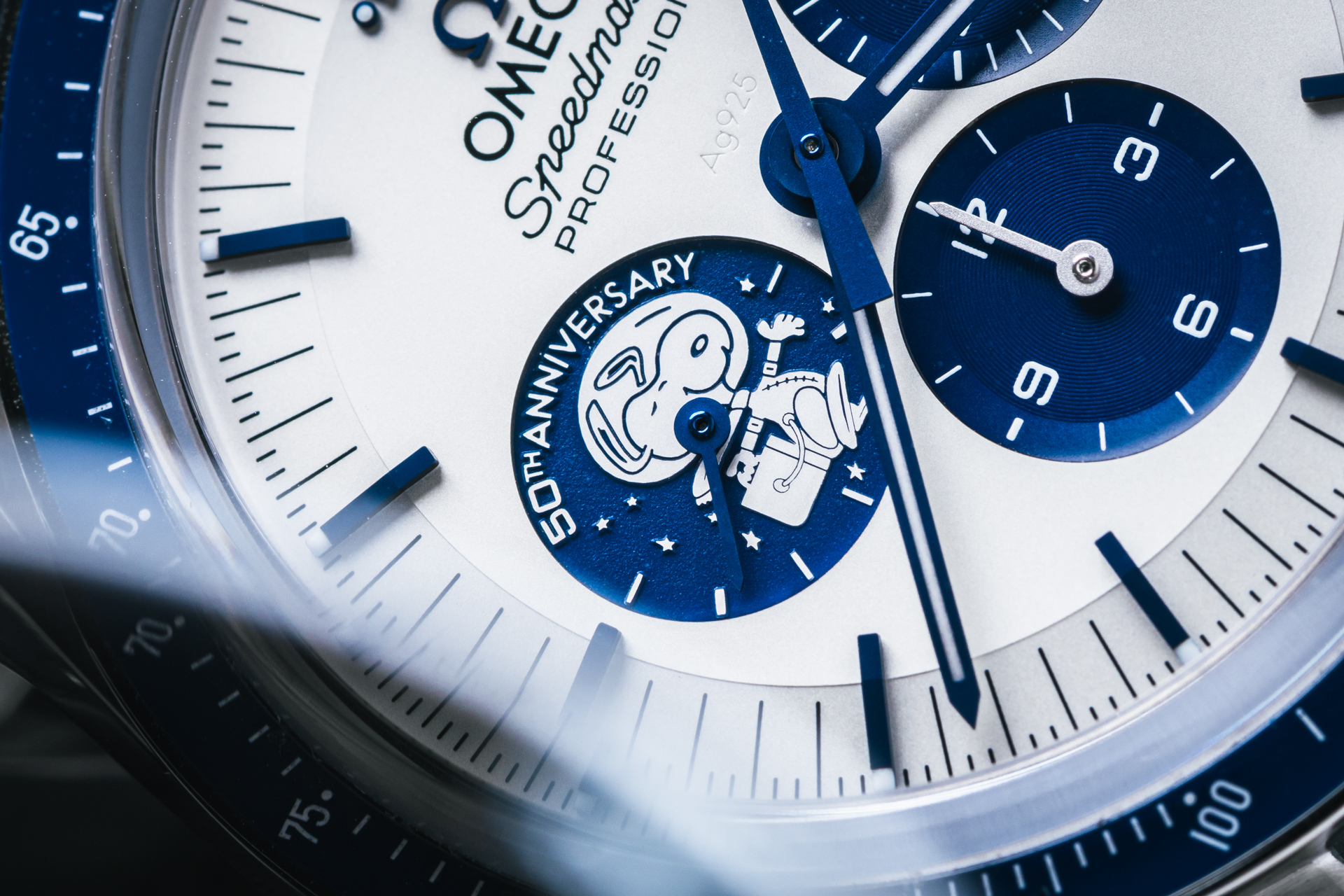 It’s the official illustration used for the physical sterling silver Snoopy medallion awarded to NASA employees and its contractors “for outstanding achievements related to human flight safety or mission success,” and a detail we’ve come to expect reserved for the caseback of Speedmaster Snoopy editions. And speaking of casebacks, the addition of the modules and an exhibition glass through which to view them render this watch a hair thicker than the standard Speedmaster “Sapphire Sandwich.” Measuring 15.5mm-thick at the top of the slightly domed sapphire crystal, this 42mm Silver Snoopy adds an imperceptible 1.5mm to the aforementioned, which feels like a fair concession to make for the watch’s undeniable charm. Otherwise, its presence on the wrist is entirely predictable for those familiar with the Speedmaster’s long-running silhouette. 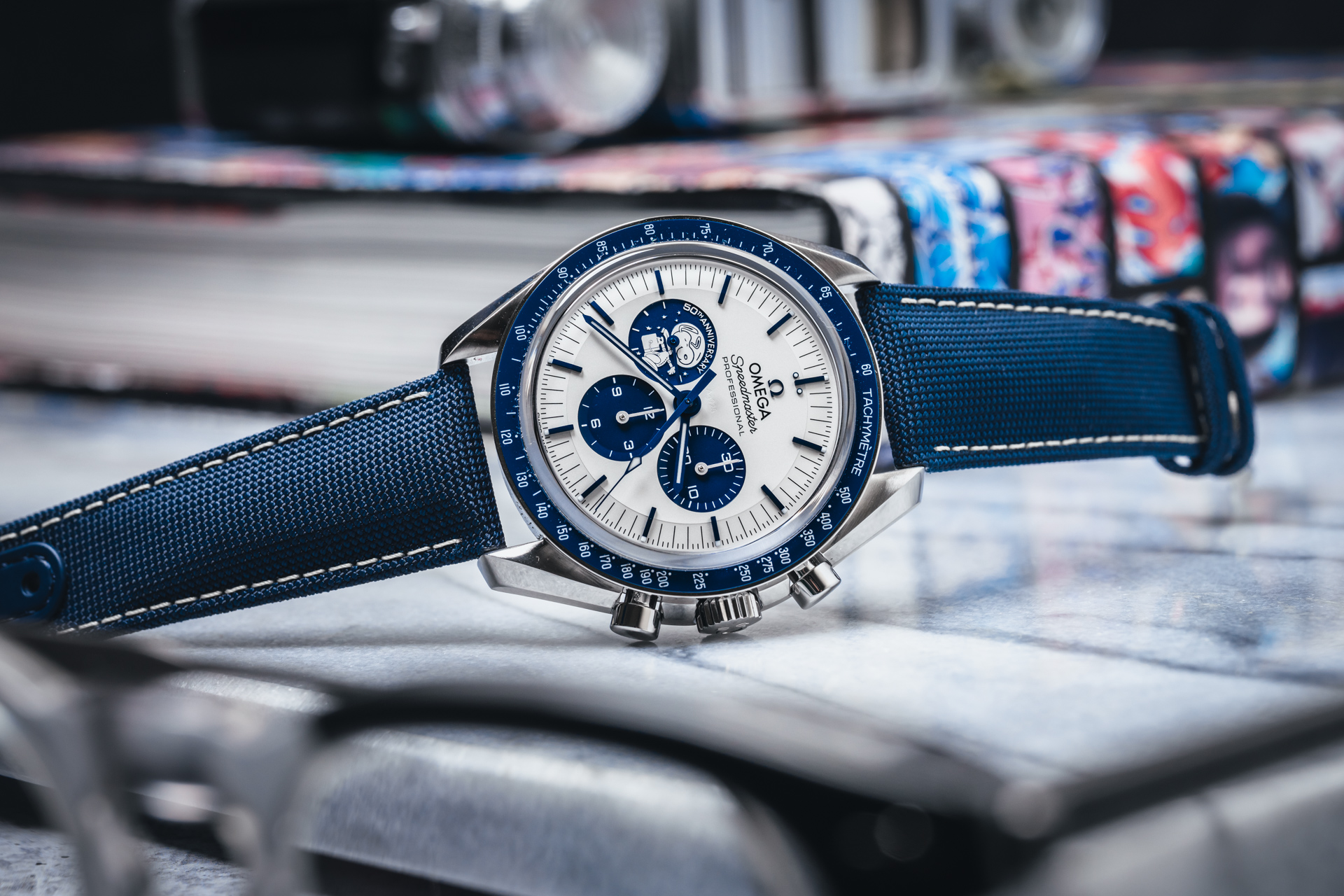 Like the Speedmaster Alinghi from earlier this year, and the Apollo 8 from Baselworld 2018, this new Silver Snoopy (ref. 310.32.42.50.02.001) boasts an impressive dial rich with color, texture, and immense detail — all hallmarks of Omega’s modern manufacturing might. All of this pales in comparison, though, to just how much damn fun this watch is on the wrist. There’s simply no getting around how much Omega’s designers clearly enjoyed a reference whose sole aim was “surprise and delight,” but there’s also no getting around the fact that if you want one, prepare to take a number. Shortly after it was announced back in October, the Silver Snoopy shot to the tops of wish lists for collectors worldwide, kicking off a long waiting list that’s likely a good many months away before being resolved (if ever, assuming Omega takes a page out of the Rolex book). But if you’re willing to settle in to wait to plunk down for the feel-good watch of the year, it has a price of $9,600 USD, and for those who pre-ordered early, should be landing on wrists any day now. Learn more at omegawatches.com.