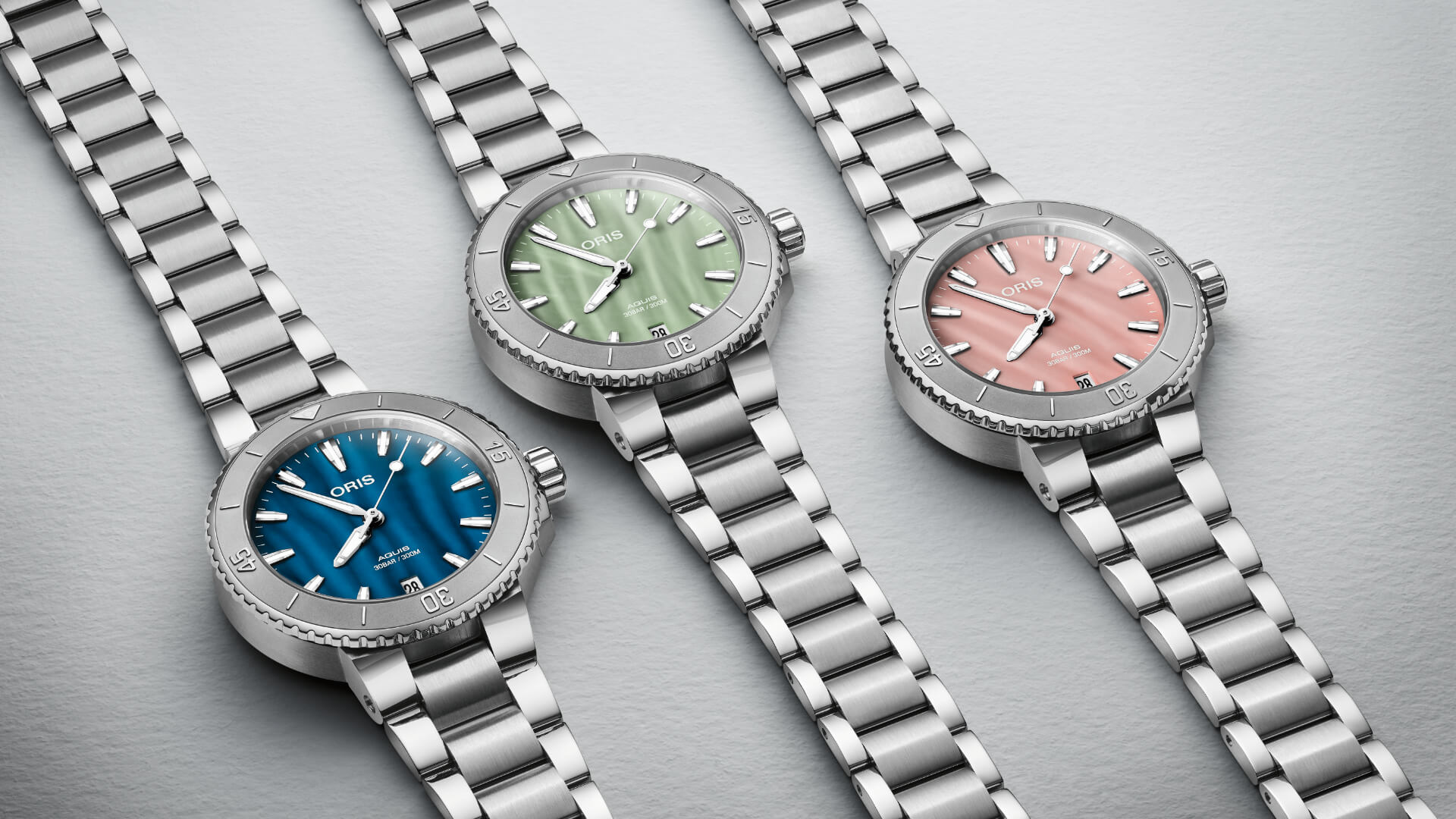 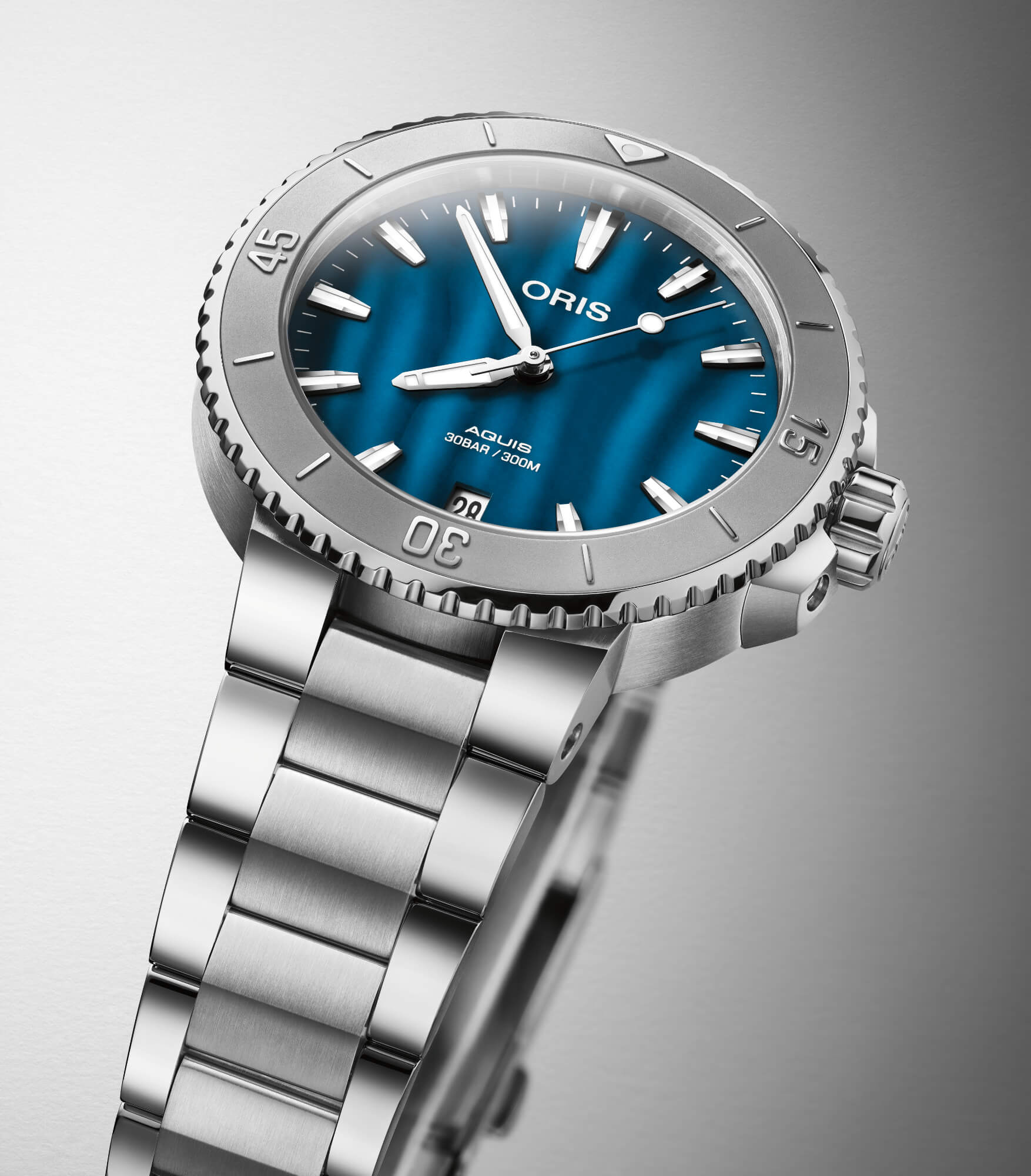 Oris is hitting two birds with one stone (or three stones, rather) with its Geneva Watch Days release of a trio of Oris Aquis Date 36.5mm models with mother-of-pearl dials. The release expands the brand’s 36.5mm Aquis offerings and its mother-of-pearl dials. Recently, Oris released the Aquis New York Harbor Limited Edition with a striking green mother-of-pearl dial, though admittedly the association with the NYC waterway made the dial reminiscent of the murky waters in the harbor. No such association exists here, though, so you’re free to imagine whatever you’d like. The new Oris Aquis Date 36.5mm features the now-classic Aquis case design that the brand has used for seemingly innumerable LEs: big round lugs with an integrated bracelet (with a foldover clasp and diver’s extension), screwed-on crown guards, double-domed sapphire, an oversized bezel, and a mid-case that expands as it approaches the wrist. These watches, though, are not limited and the offerings for the smallest Aquis case option, currently limited to one model (with the Upcycle dial). Despite its size (although the smallest diameter Aquis, it remains 12.5mm thick), the case is as functional as ever: a screw-down crown helps ensure 300m of water resistance and the unidirectional bezel features relief markings previously found on Aquis Date Relief models. 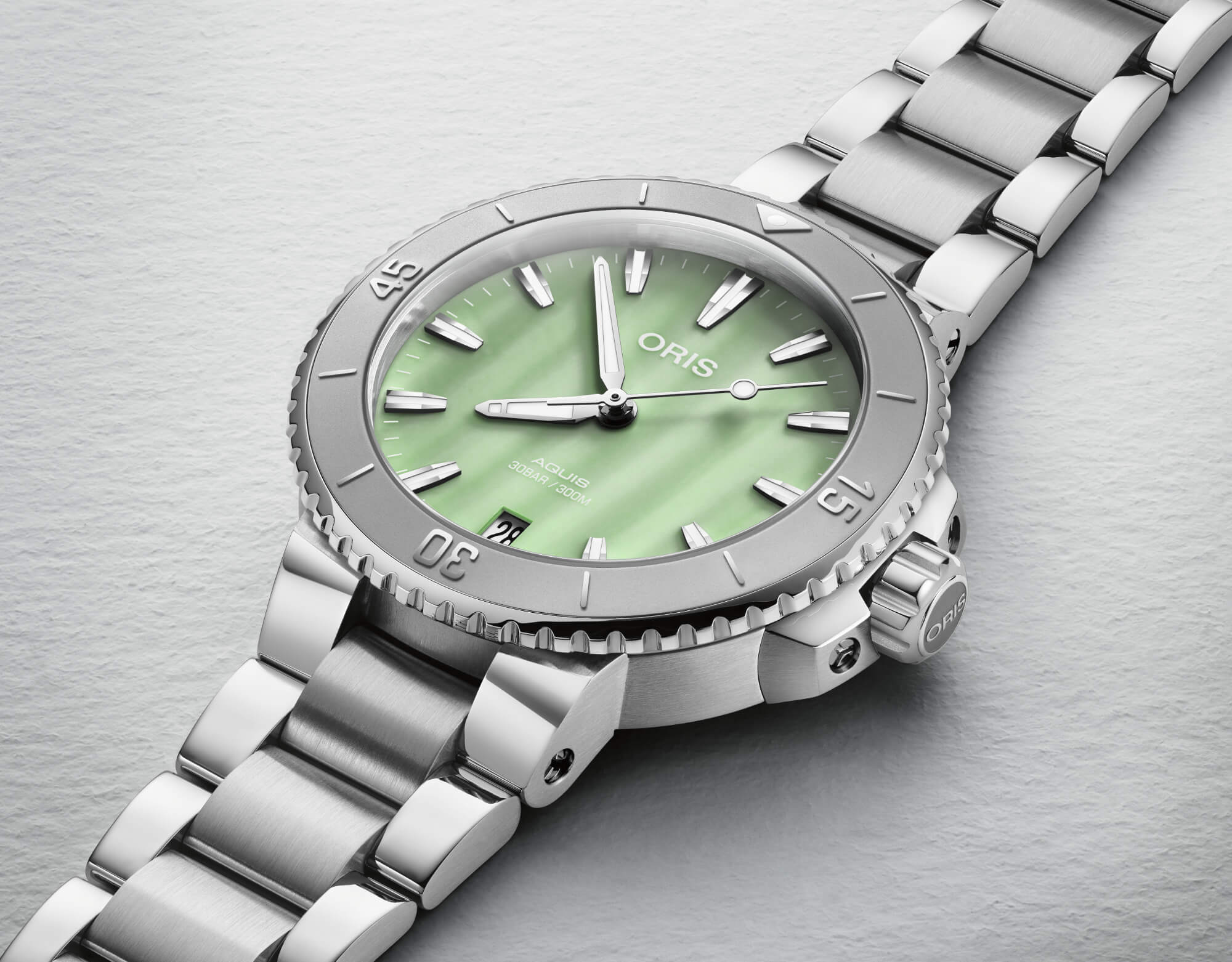 The dials are what’s new, though, so let’s chat about them. Three dials never seen from Oris are at hand: Blush Pink, Aegean Blue, and Seafoam Green. The striated mother-of-pearl creates a beautiful effect in renders, though obviously, every dial will be unique, so may feature different patterning. The dials feature the familiar high-polish applied Aquis markers and hands in a similar obelisk-like style and a lollipop seconds, all of which are treated with a generous coat of Super-LumiNova. Unlike the larger Aquis models, the date on the 36.5mm models is more doesn’t result in a shortened marker, instead occupying the place of the marker almost entirely (the Calibre 400 has resolved this issue on Aquises where it’s equipped). As ever the date placement is related to the movement, in this case, the Oris 733, which is based on the Sellita SW200-1, and is on display through a mineral glass caseback. The movement features the signature red rotor and a somewhat lackluster 38-hour power reserve at 28,800 vph. Some may have hoped to see the newer in-house Calibre 400 in these new watches, but the decision was practical: the Calibre 400 doesn’t fit into the 36.5mm case. 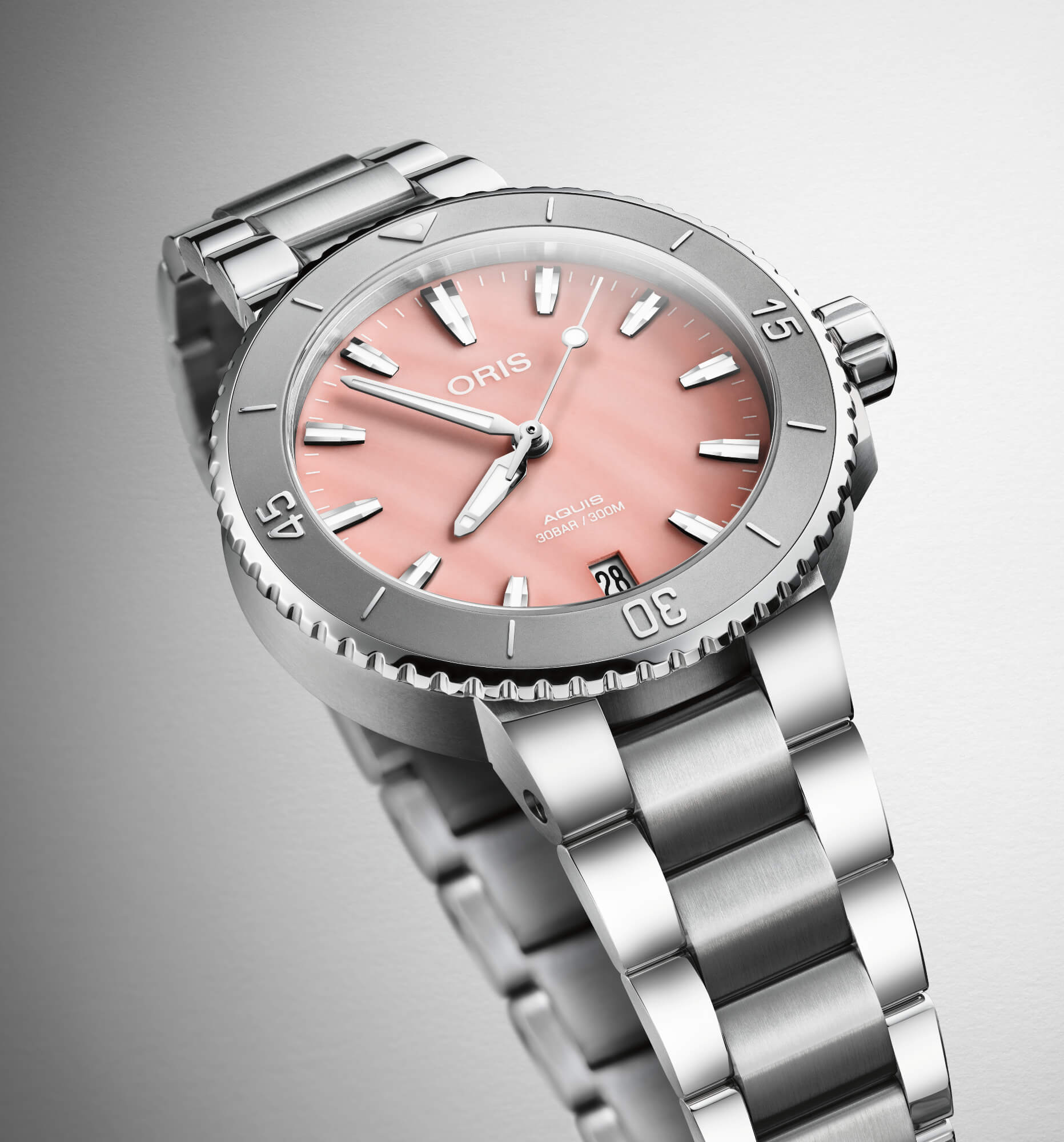 It would be easy to suggest that Oris is aiming these new releases at women, but that would be a bit reductive and ignore larger trends in the watch industry. First, the pendulum is finally starting to swing back towards modestly [read: reasonably] sized watches, with brands like Christopher Ward and Rolex releasing 36mm versions of popular models (and people are loving it: the recent spate of sub-38mm releases has led to more excited conversations about case size than I’ve ever had). Second, these releases hit on the trend of colorful dials, but in a slightly new way with the mother-of-pearl. I think these watches will have broad appeal, and given how the Aquis can wear a bit chunky, they will be especially attractive to those who have felt the current options are too large. If these don’t appeal to you, the smart money is on Oris continuing to expand its 36.5mm Aquis offerings, so just keep your eyes peeled. The new Aquis Date 36.5mm mother-of-pearl models are priced at $2,400. For more information, please visit the Oris website.