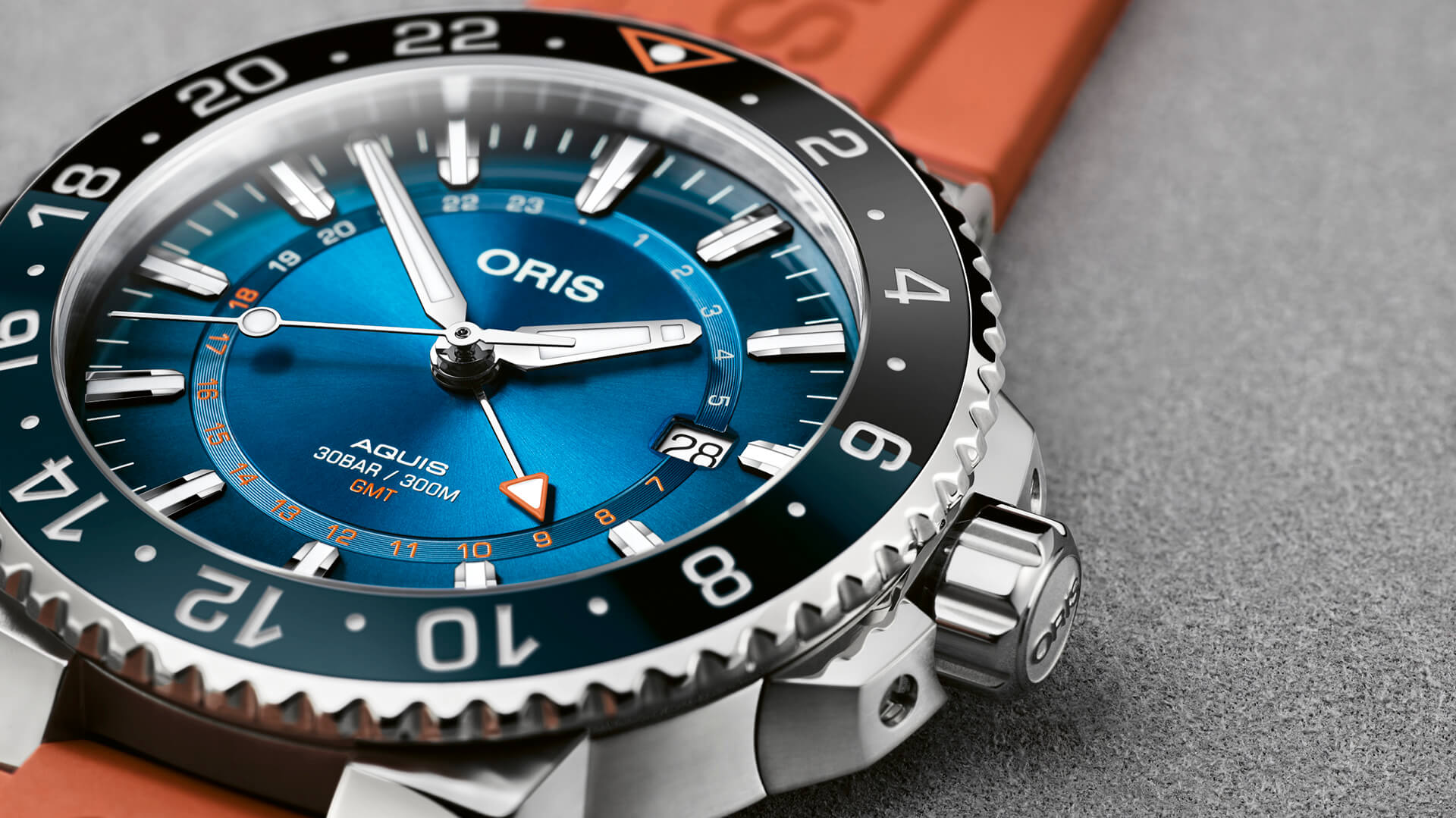 Swiss independent favorite Oris has a long and proud history of creating limited edition models to aid its ongoing crusade towards ocean conservation. These have covered a wide gamut of oceanic causes from ocean plastic removal to helping restore the population of the hammerhead shark, but one of Oris’ most frequent beneficiaries has been the Coral Restoration Foundation, based in the Florida Keys. The brand has supported the foundation’s efforts to save America’s only coral reefs twice before, once in 2017 with the handsome Aquis Staghorn Limited Edition, and again early this year with the flashy solid gold Aquis Carysfort Reef Limited Edition. Just in time for summer, Oris has once again partnered with the Coral Restoration Foundation on a limited edition piece, this time a more subdued stainless steel model still dedicated to re-growing Key Largo’s most famous coral reef. This new stainless steel Oris Aquis Carysfort Reef Limited Edition builds on the same basic structure as the previous model, made more accessible to the public and more in line price-wise with the rest of Oris’ offerings. 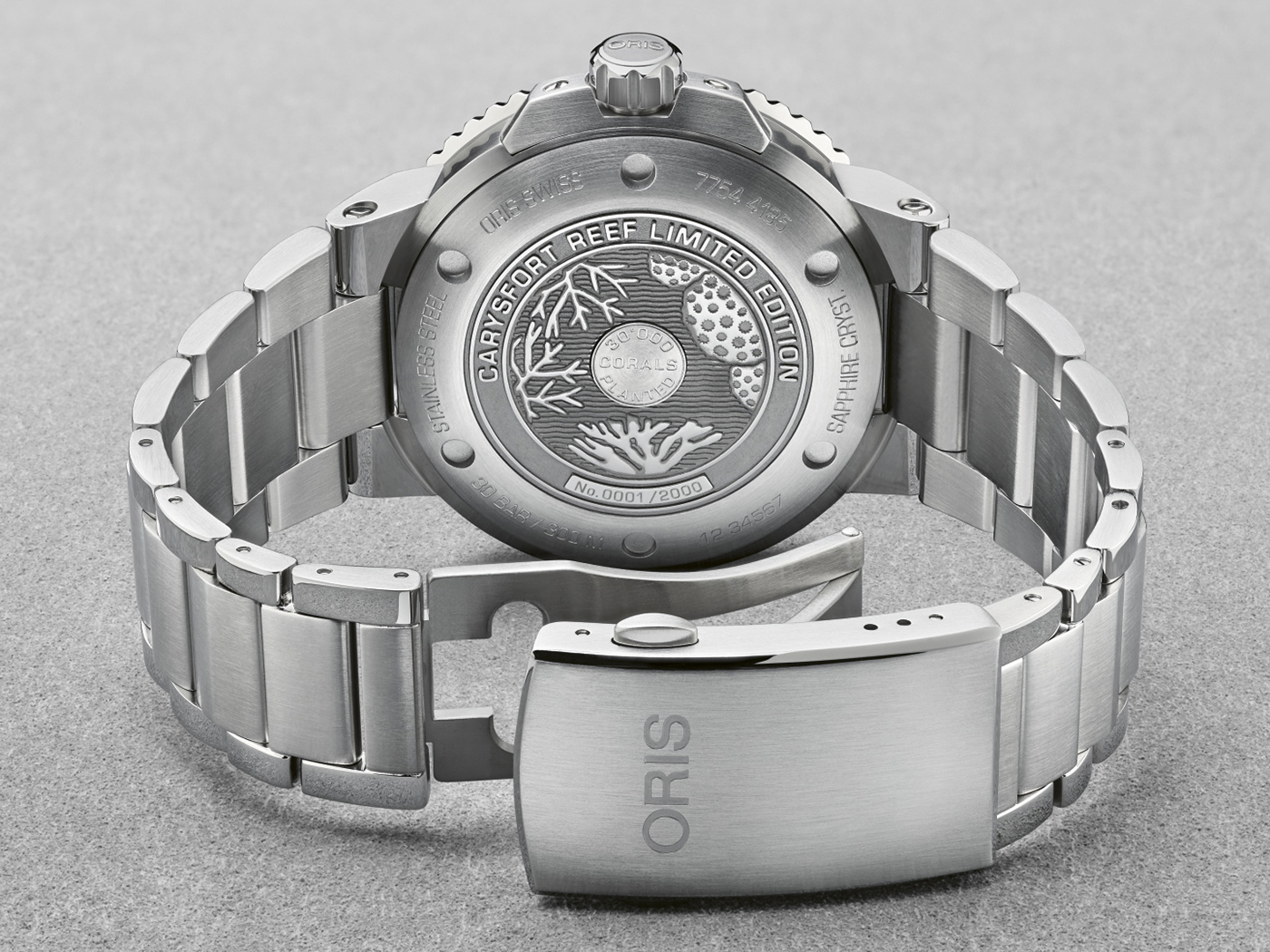 Like the previous model, the new Oris Aquis Carysfort Reef Limited Edition begins with the 43.5mm form of the standard Aquis. Here, however, the case is rendered in more familiar stainless steel. While a nearly 44mm diameter sounds massive on paper, the unorthodox shape of the Aquis helps make these numbers more than a little deceiving. The nearly round case, along with the characteristic stubby semi-integrated lugs with their sharp downturn, allow this to wear closer to a 41mm or 42mm timepiece in practice. It’s still undoubtedly sporty and substantial, but far less unwieldy than one might think. Around back, the solid caseback is dominated by a complex engraving celebrating the 30,000th individual coral replanted by the Coral Restoration Foundation. With multiple different species represented in sharp relief here, not only is it one of the nicest executed engravings at this price point, it’s also far more meaningful than the usual pieces used to set the mood for a diver without any real association. Of course, with the standard modern Aquis case also comes the standard and respectable 300 meters of water resistance, but one thing holds this back from being a truly effective diver – the bezel. The Carysfort Reef Limited Edition goes with a black and blue bidirectional ceramic GMT bezel instead of the traditional unidirectional type, and while it certainly helps the globetrotting snorkeler, it does little to aid a more serious scuba diver. That said, in an age of dive computers, a limited edition mechanical dive watch is far more likely to end up on the wrist of a tropical vacationer than a professional diver either way. 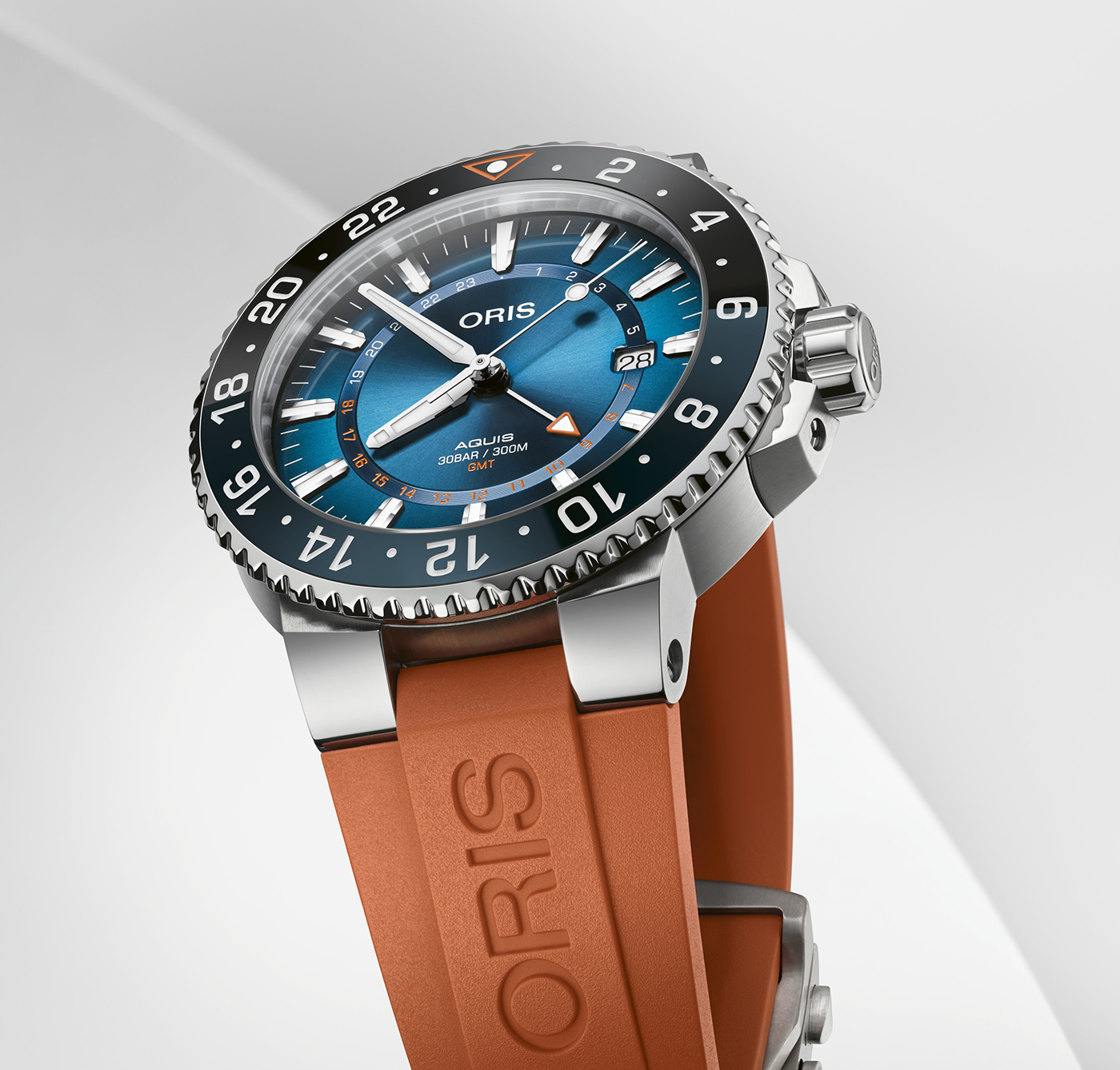 If the dial of the new Oris Aquis Carysfort Reef Limited Edition seems familiar, that is no mistake. Taking the same approach as the previous gold model, the new stainless steel version takes away the ostentation of gold fixtures and adds a punch of summery orange. The base dial remains a stunning ocean blue sunburst, coupled with large faceted indices for plenty of visual flash. The GMT complication is handsomely integrated here, with a snailed ring sitting just inboard of the indices printed with the 24 hour scale in white and orange. Another touch of orange on the short arrow tipped GMT hand aids legibility and introduces a handsome visual highlight. The overall effect feels very much at home in the Aquis line but adds just enough flair to mark this as a special offering. 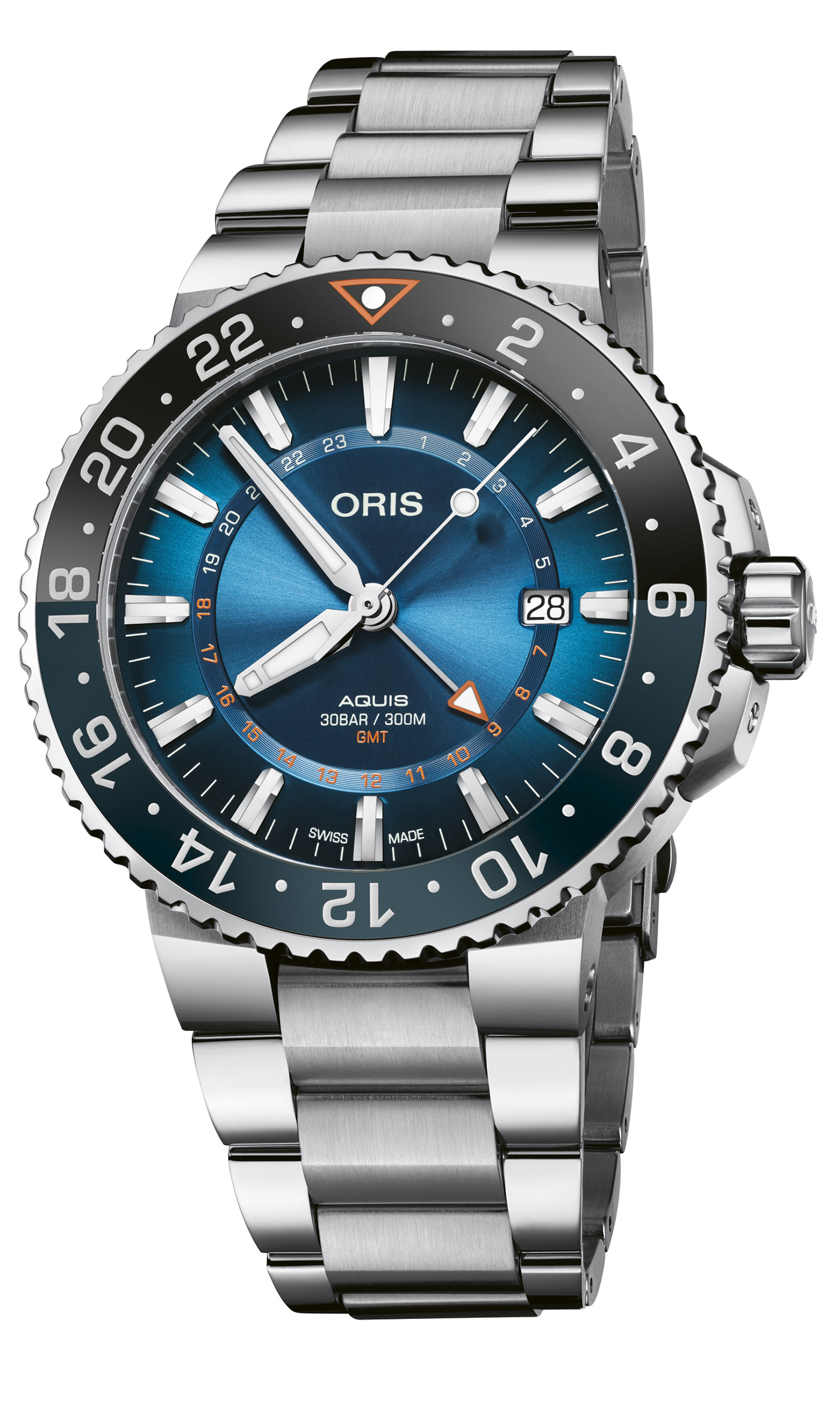 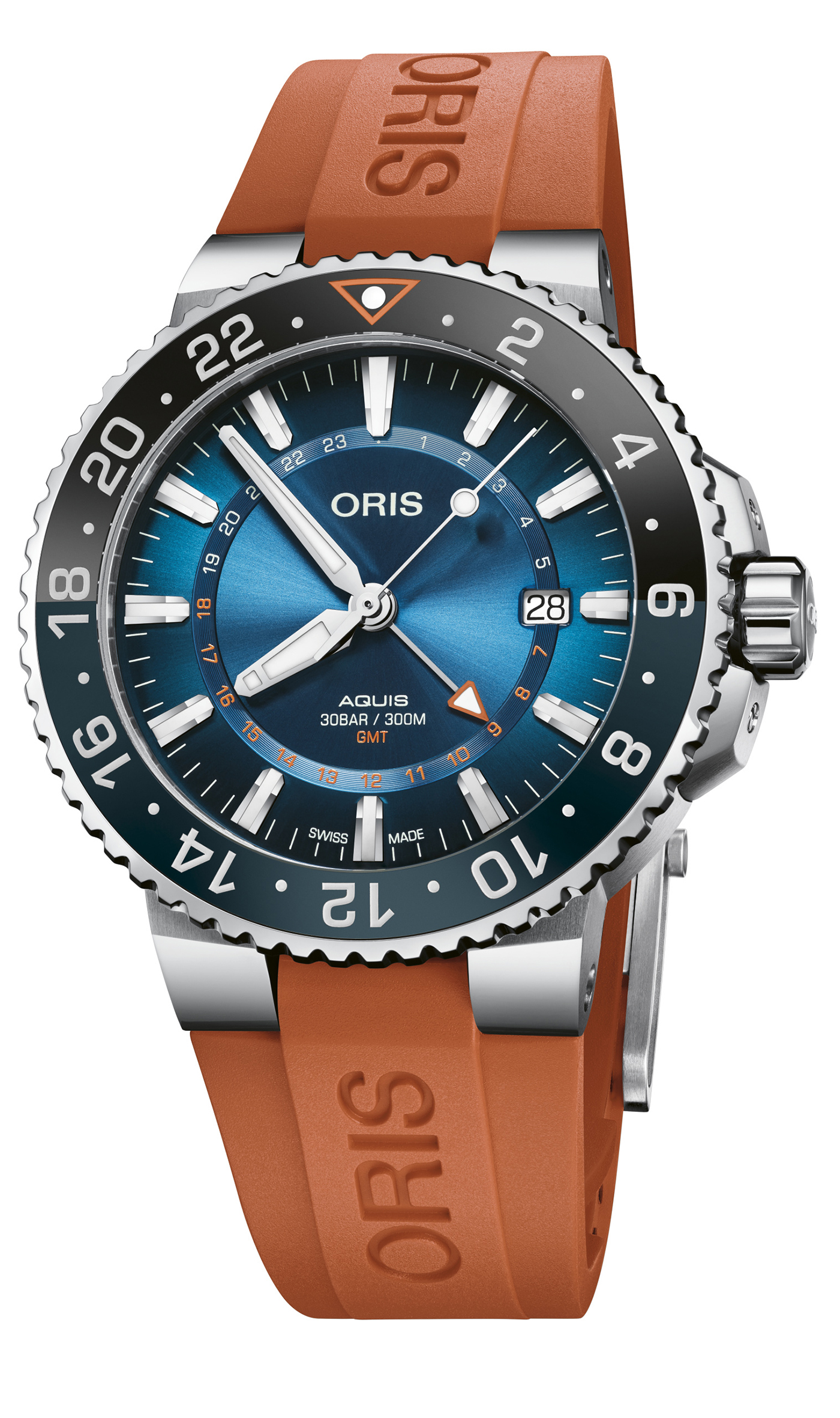 One of the great difficulties with the Oris Aquis line has always been strap choice. With narrow, unconventional lug design, third-party replacement straps for these watches have always been few and far between. Thankfully though, the Aquis Carysfort Reef Limited Edition offers a pair of very different options in this department. The standard tapering three link Aquis bracelet makes an appearance here, allowing the design to be more versatile and subdued. For maximum impact, however, the watch is also available with Oris’ excellent signed rubber strap in orange. Soft, supple and undoubtedly summery, the rubber option also features a diver’s extension for easy underwater use. 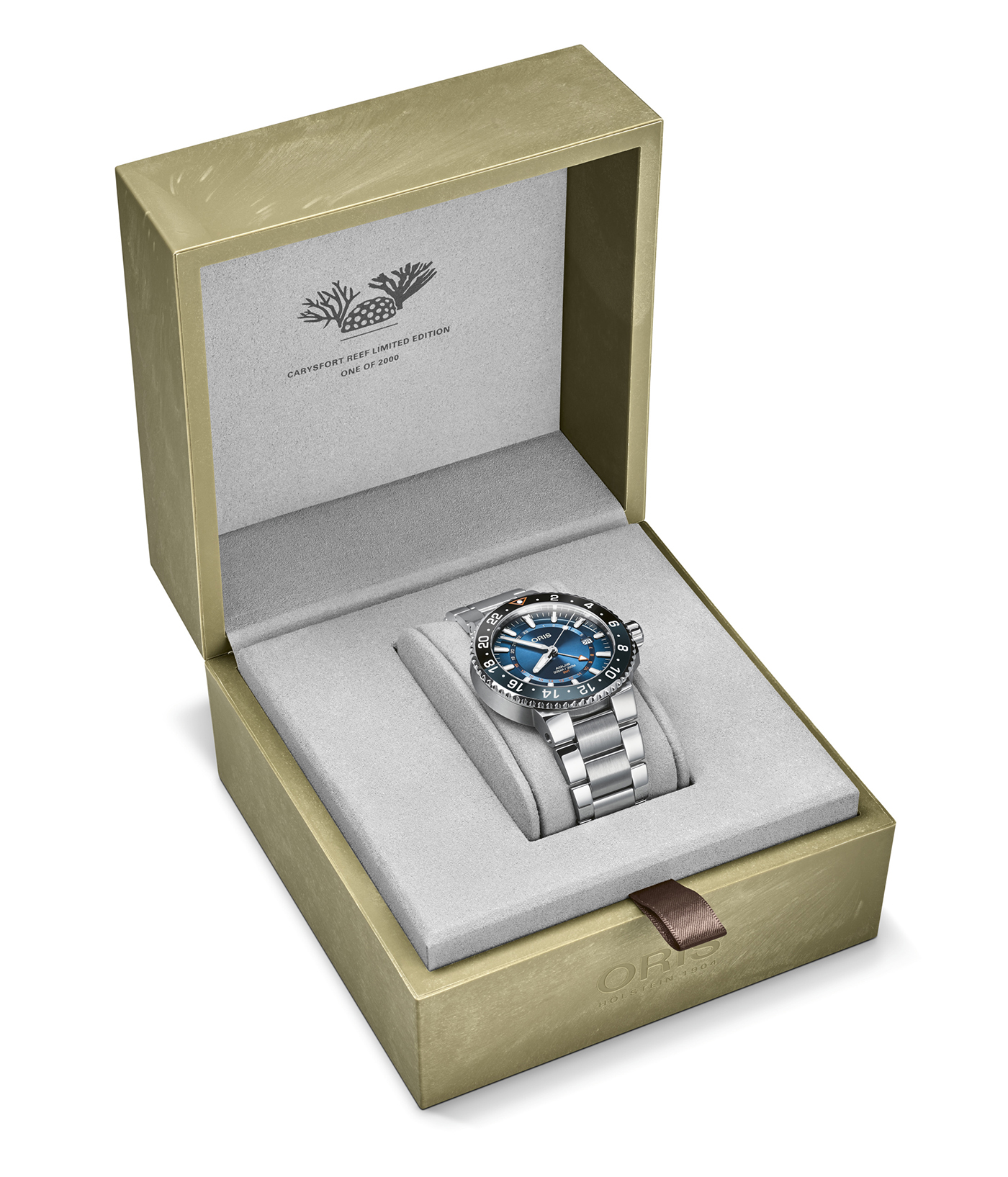 The stainless steel Oris Aquis Carysfort Reef Limited Edition takes some of the best elements of the earlier gold model and brings them into line with the rest of Oris’ brand stable, providing a handsome and more accessible chance to support a worthy cause without the gold version’s eye-watering price point. 2,000 examples of the Oris Aquis Carysfort Reef Limited Edition in stainless steel will be made, available now through authorized dealers at a starting MSRP of $2,800. For more information, please visit the brand’s website.