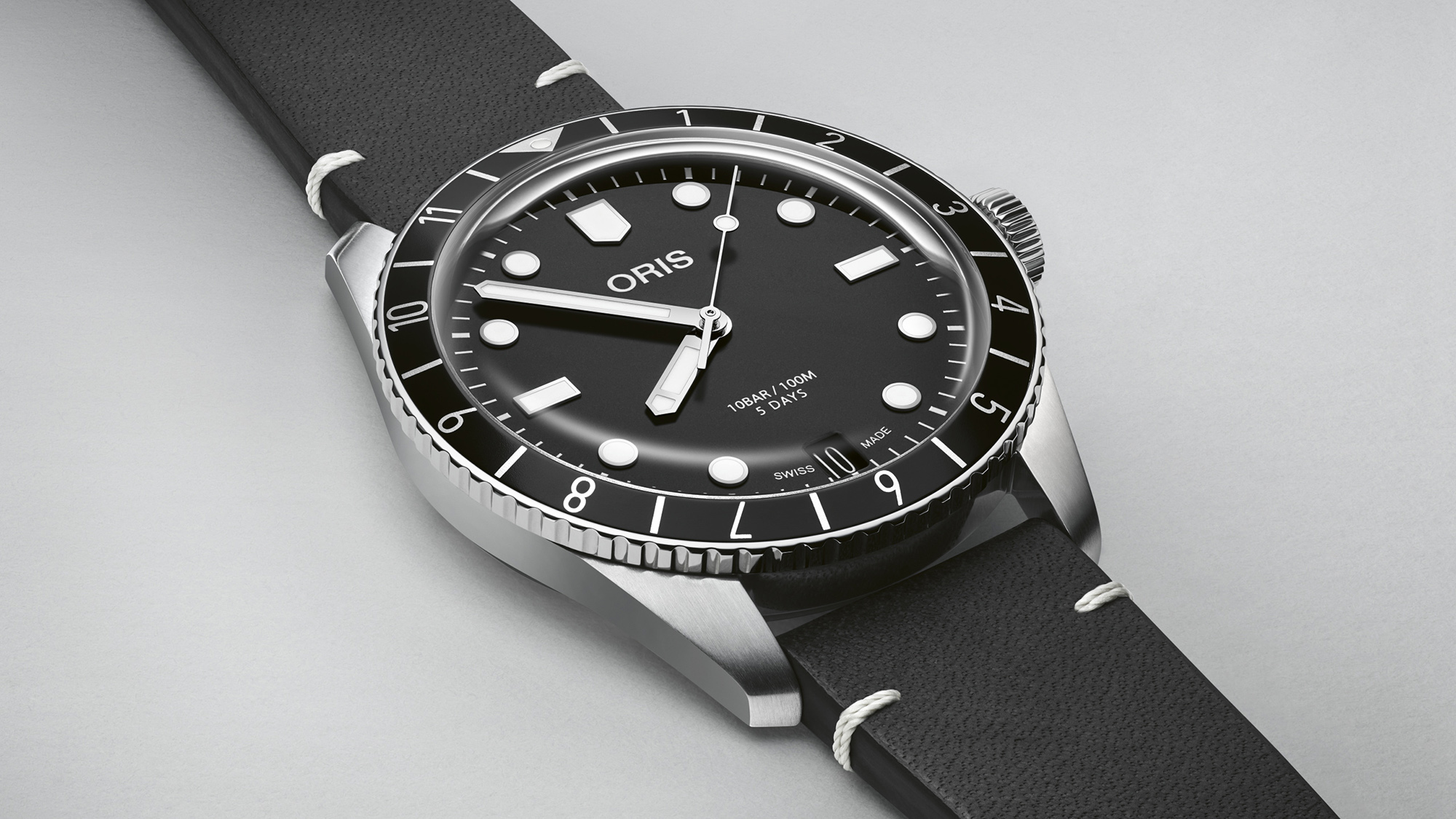 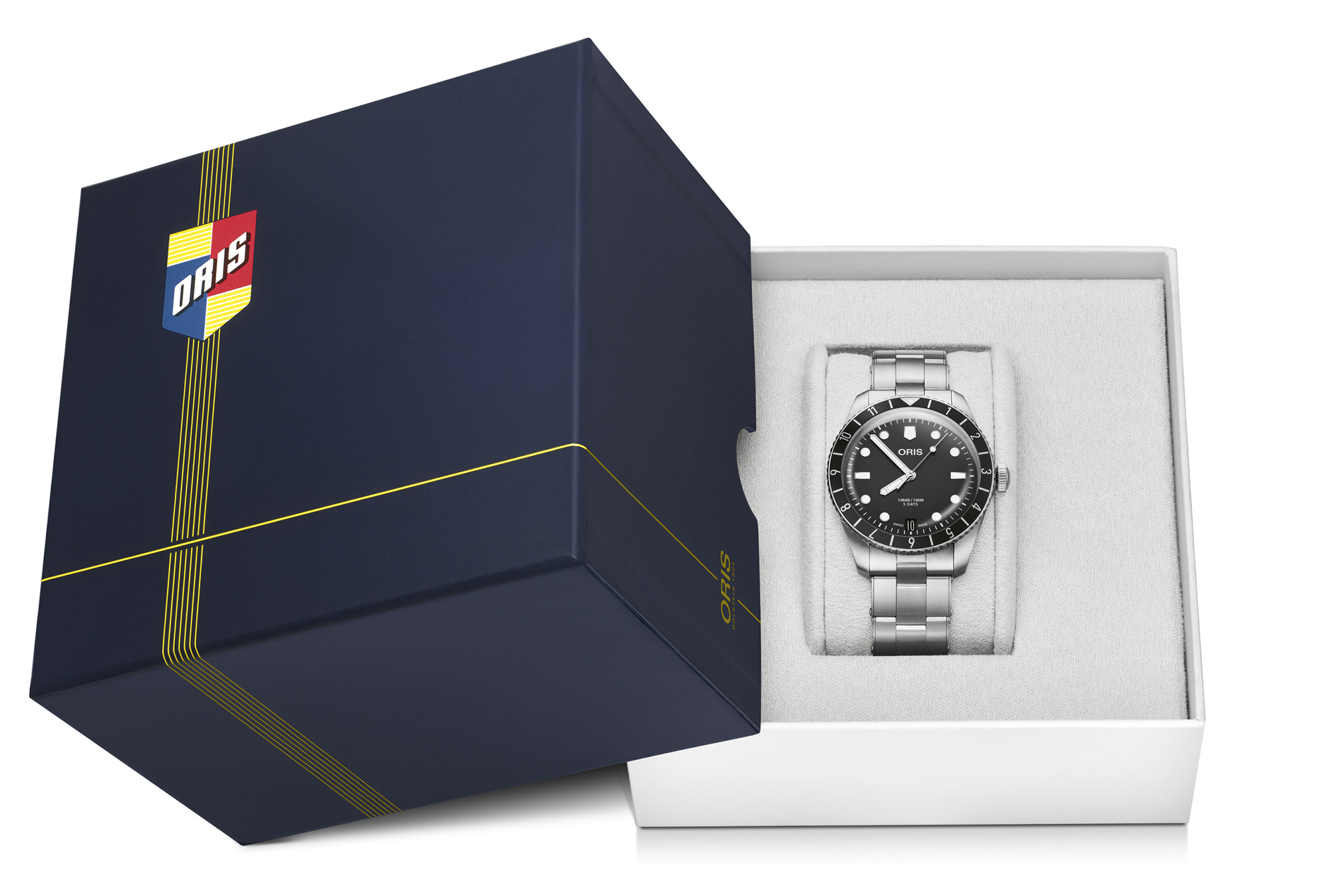 Since its introduction in late 2020, the Calibre 400 series of in-house automatic movements has quickly become the flagship movement option for Oris. The independent brand has naturally been eager to install this high-performance, ultra-reliable powerplant into as many of its product lines as possible, but curiously, the in-house movement has yet to find its way into a regular-production variant of Oris’s wildly popular Divers Sixty-Five series of vintage-style dive watches — until now. As part of its novelties for Geneva Watch Days 2022, the brand has announced its first-ever standard-production Calibre 400-powered Divers Sixty-Five option, complete with a clean monochrome look and a handful of unique visual cues. With an impressive in-house movement and a classically versatile take on the series’ core cues, the new Oris Divers Sixty-Five 12H Calibre 400 elevates the brand’s beloved diver line with a newly refined execution. 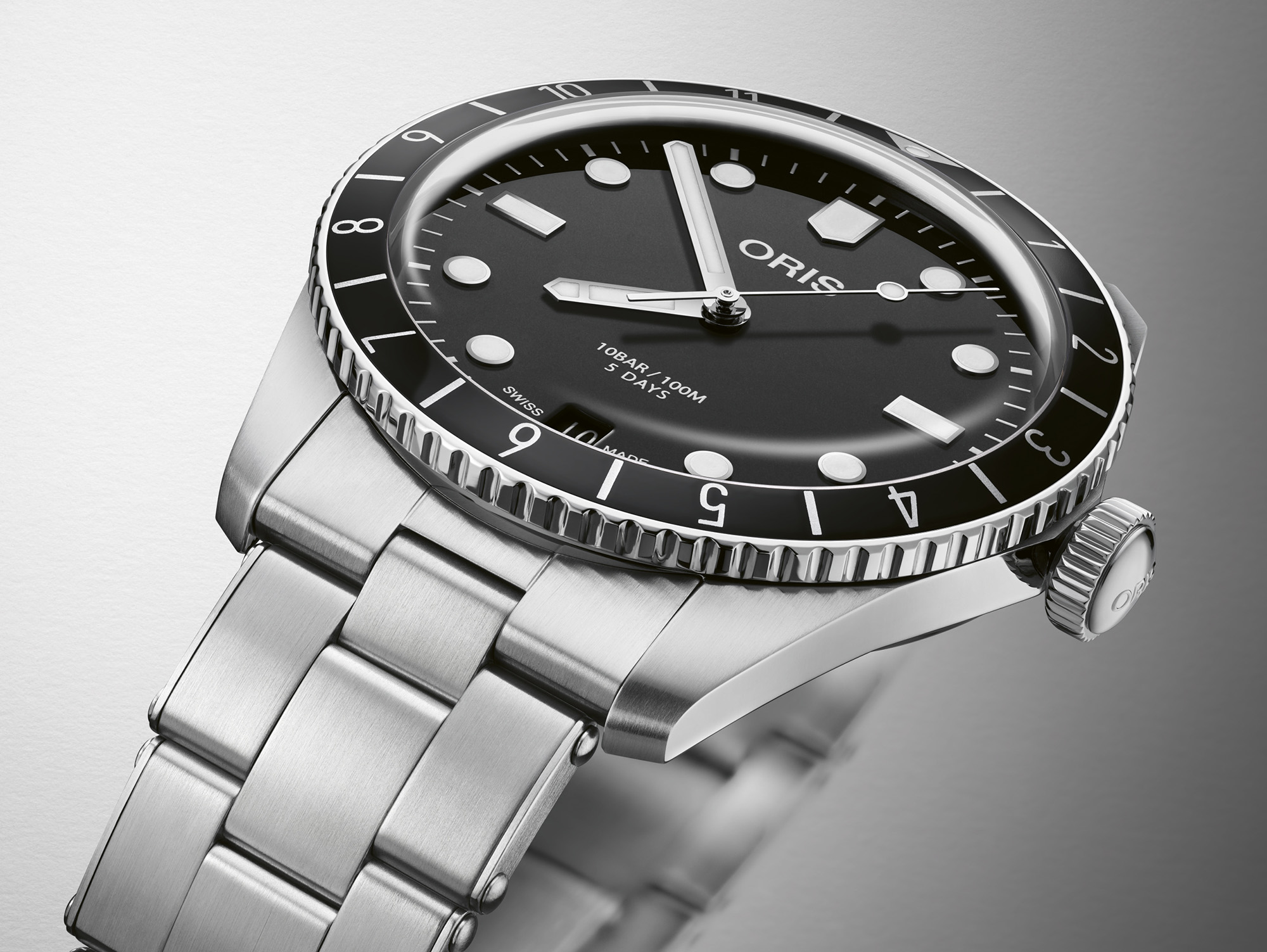 At 40mm-wide, the stainless steel case of the Oris Divers Sixty-Five 12H Calibre 400 broadly follows the pattern laid down by the rest of the Divers Sixty-Five family. The line’s familiar long unchamfered tapering lugs, skin diver-style unguarded pillbox crown, and narrow coin edge bezel are all present and accounted for here, but the brand changes the formula slightly with a new bi-directional aluminum bezel insert. Rather than using a traditional dive scale, Oris instead opts for a simple graphic 12-hour scale in a light, airy modern typeface. Although this does somewhat impede the Divers Sixty-Five 12H Calibre 400’s utility as a dive watch, this change both effectively sets the new model apart from its non-Calibre 400 equipped counterparts in images and provides solid utility for day-to-day use. Interestingly, Oris does not make mention of the new model’s thickness in press materials, so the effect of the new movement on what has historically been a reasonably slender case design is an open question at this time. That said, Oris does top the new design with a sapphire display caseback, which gives wearers a clear view of the new movements but does little to improve the watch’s low (for a diver) 100-meter water resistance rating. 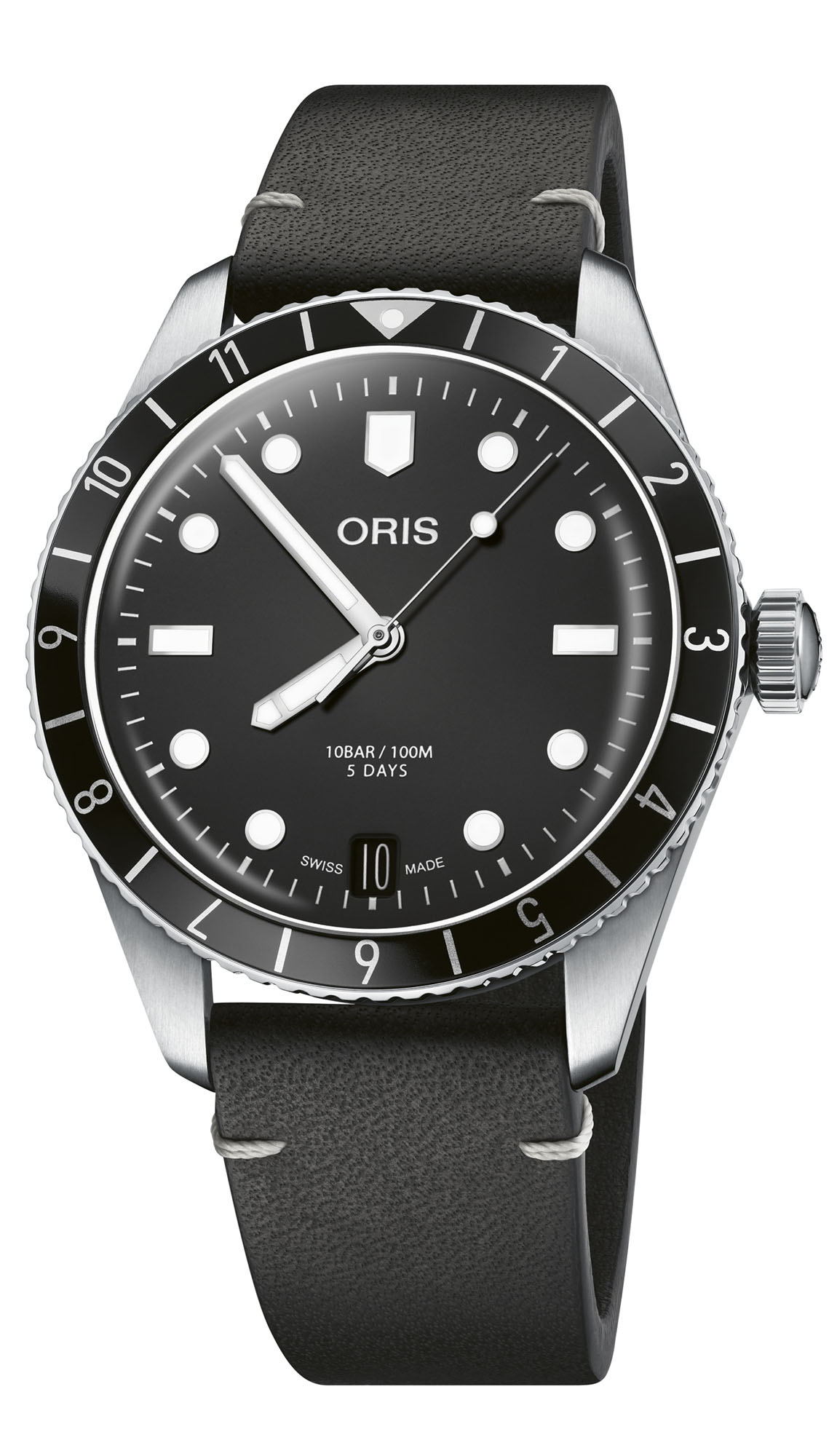 For the dial of the Divers Sixty-Five 12H Calibre 400, Oris takes the classically handsome diver aesthetics of past series iterations and distills them down to the pure visual elements. The classic matte black dial surface shows off a finely grained texture in initial images, providing a versatile and neutral backdrop for the rest of the design. Oris’ unique take on applied diver indices also makes its return here, stripped of any fauxtina coloration and presented with a fill of clean, pure white Super-LumiNova. Likewise, the line’s narrow straight sword handset is carried over for the new iteration, with a matching set of optic white lume fills. Like so many minimalist and monochromatic designs, this new variant sets itself apart in the fine details, and Oris’s decision to use a pale gray tone for the light outer minutes track and pared-back dial text in images helps these elements to fade into the backdrop and emphasize the open, spacious feel of the dial. The move to the Calibre 400 movement also brings with it the Calibre 400’s distinctive 6 o’clock date display, and the combination of the dial-matching date wheel with the softly rounded cutout window works to make this complication seem balanced and smoothly integrated in photos. 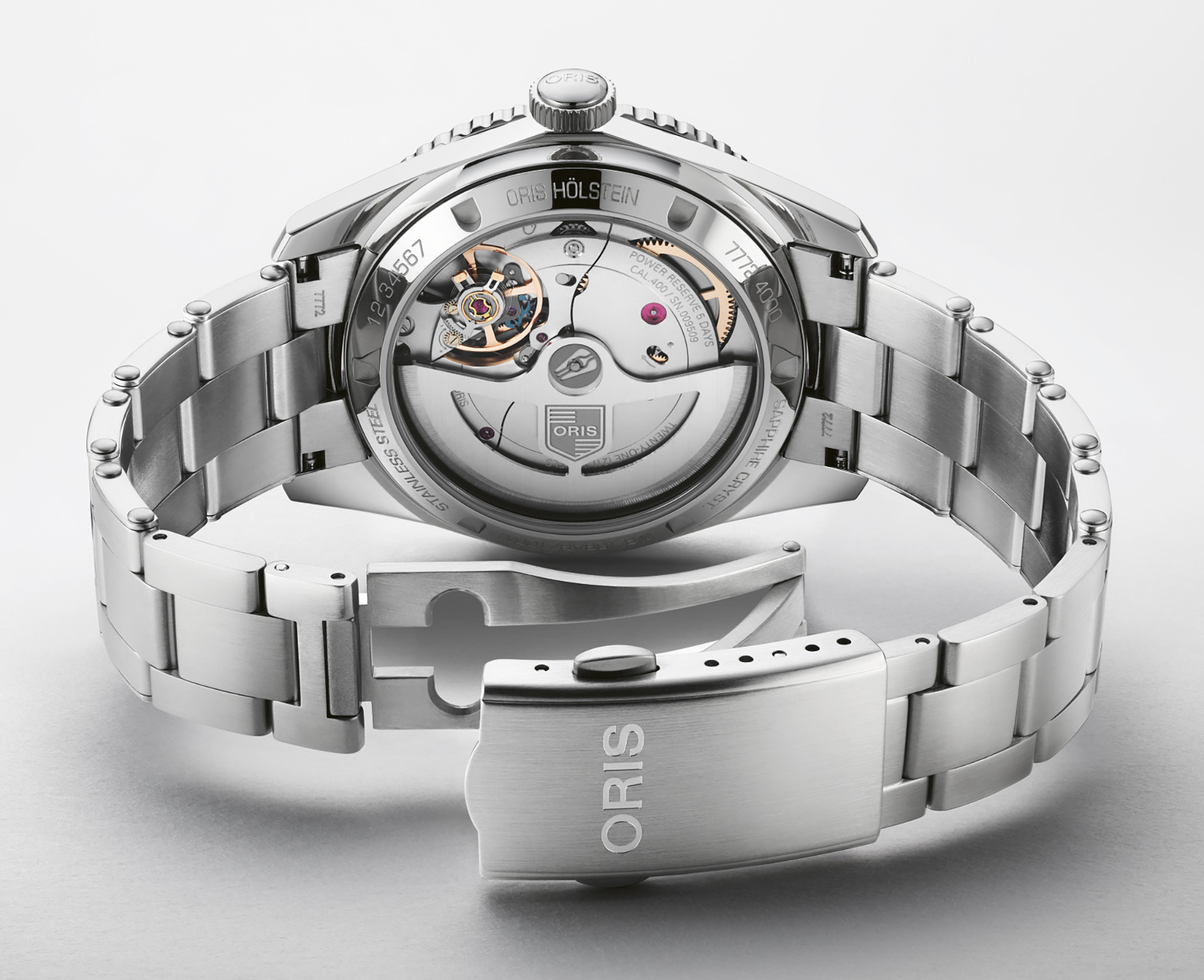 As with its previous appearances across the brand’s product line, the in-house Calibre 400 automatic movement inside the Oris Divers Sixty-Five 12H Calibre 400 delivers impressively robust performance. The movement boasts an immense 120-hour power reserve at a 28,800 bph beat rate, along with magnetic resistance far above the industry average and a lengthy 10-year recommended service interval. Oris backs this last point up with an equally enduring 10-year warranty, which should keep wearers feeling secure for years to come. The brand’s simple, spartan approach to finishing complements the rest of the restrained design in images, with a matte blasted three-quarter plate flanked by cutouts for the balance wheel and glimpses of the gear train below. To complete the look, Oris offers the Divers Sixty-Five 12H Calibre 400 with a pair of strap options. First off is the brand’s retro-style riff on the classic three-link rivet oyster style bracelet, which maintains the sporty midcentury feel of the overall design admirably in initial images. Beyond the period-correct look, however, this bracelet’s use of female endlinks should help it to wrap around the wrist smoothly and mitigate the length of the lugs somewhat in actual wear. A minimalist matte black leather strap is also available, for those looking for a more relaxed alternative. 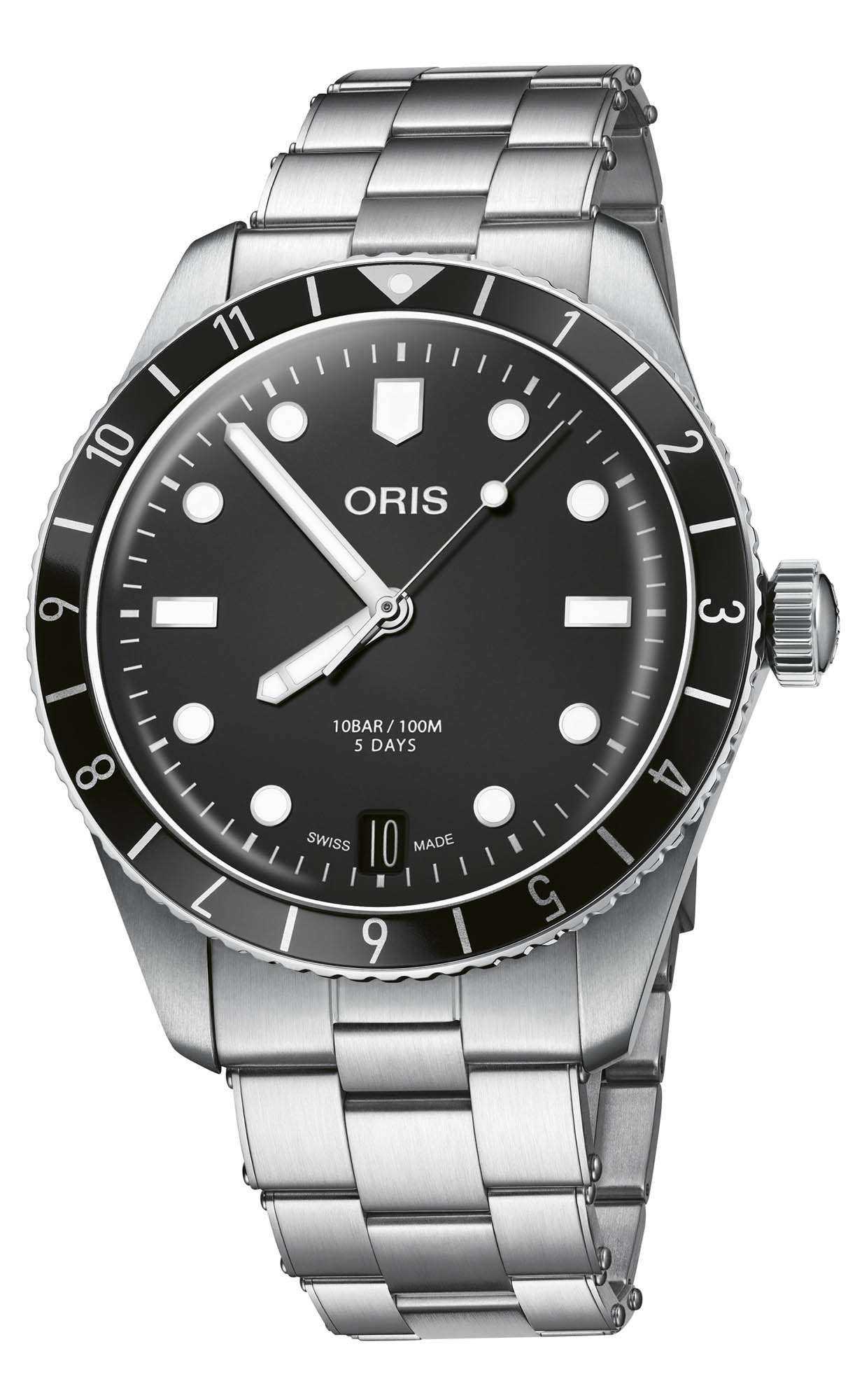