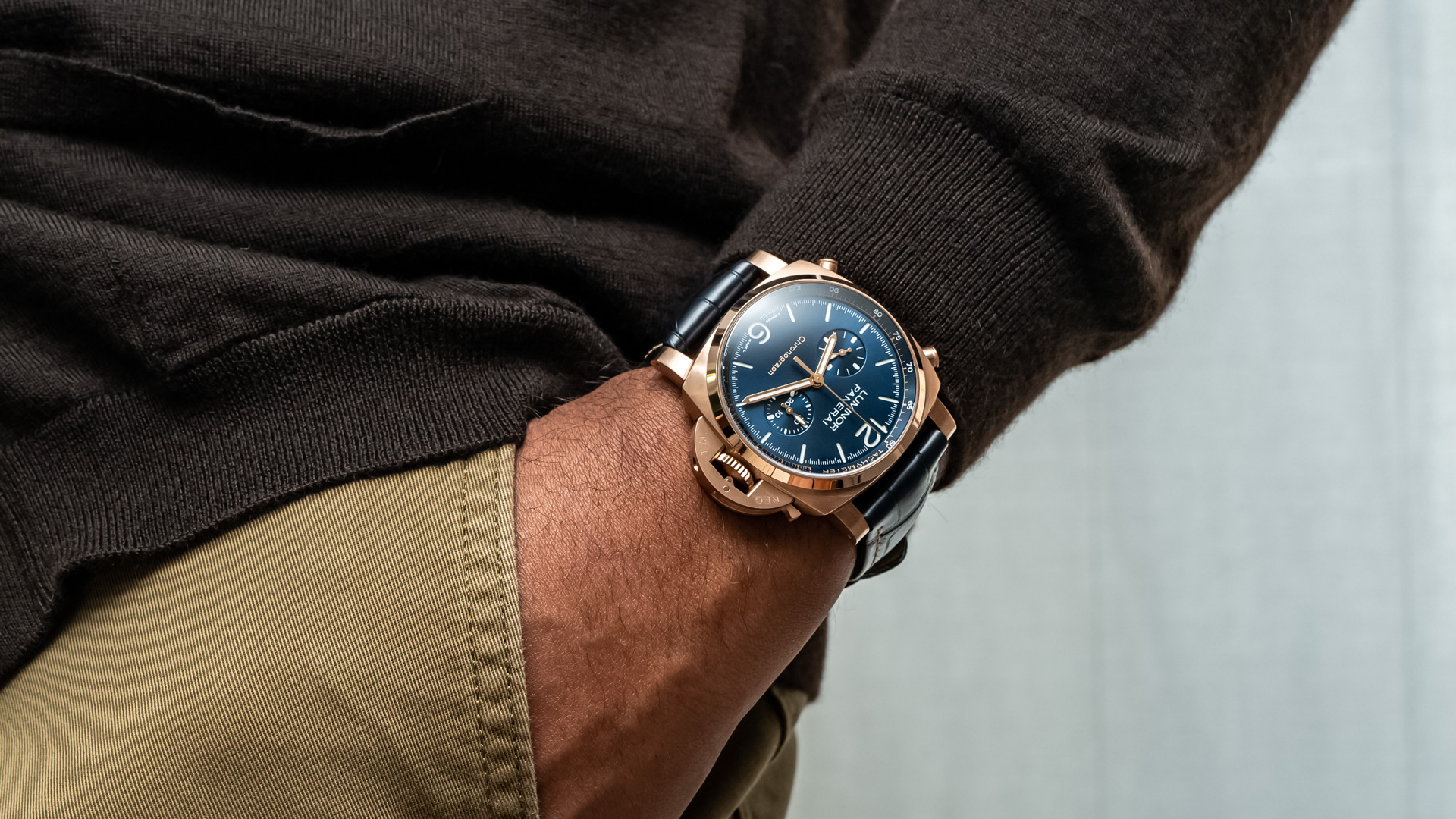 A few weeks back at Watches & Wonders 2021, we saw Panerai release a new chronograph watch collection, as well as a new chronograph movement. For a brand with a history and design legacy so closely associated with diving to make such an investment in developing its chronographs is a curious, and risky, move. Making something of a value play, the new Panerai Luminor Chrono collection begins at just over $9,000, which places it in direct competition with some of the luxury chronograph offerings from peers like Breitling and IWC, as well as pieces like the newest Chronomaster Sport from Zenith. But do these Luminor Chronos have what it takes to both convince existing Paneristi to diversify their palates as well as lure in new customers with no shortage of choices in the luxury chronograph segment? 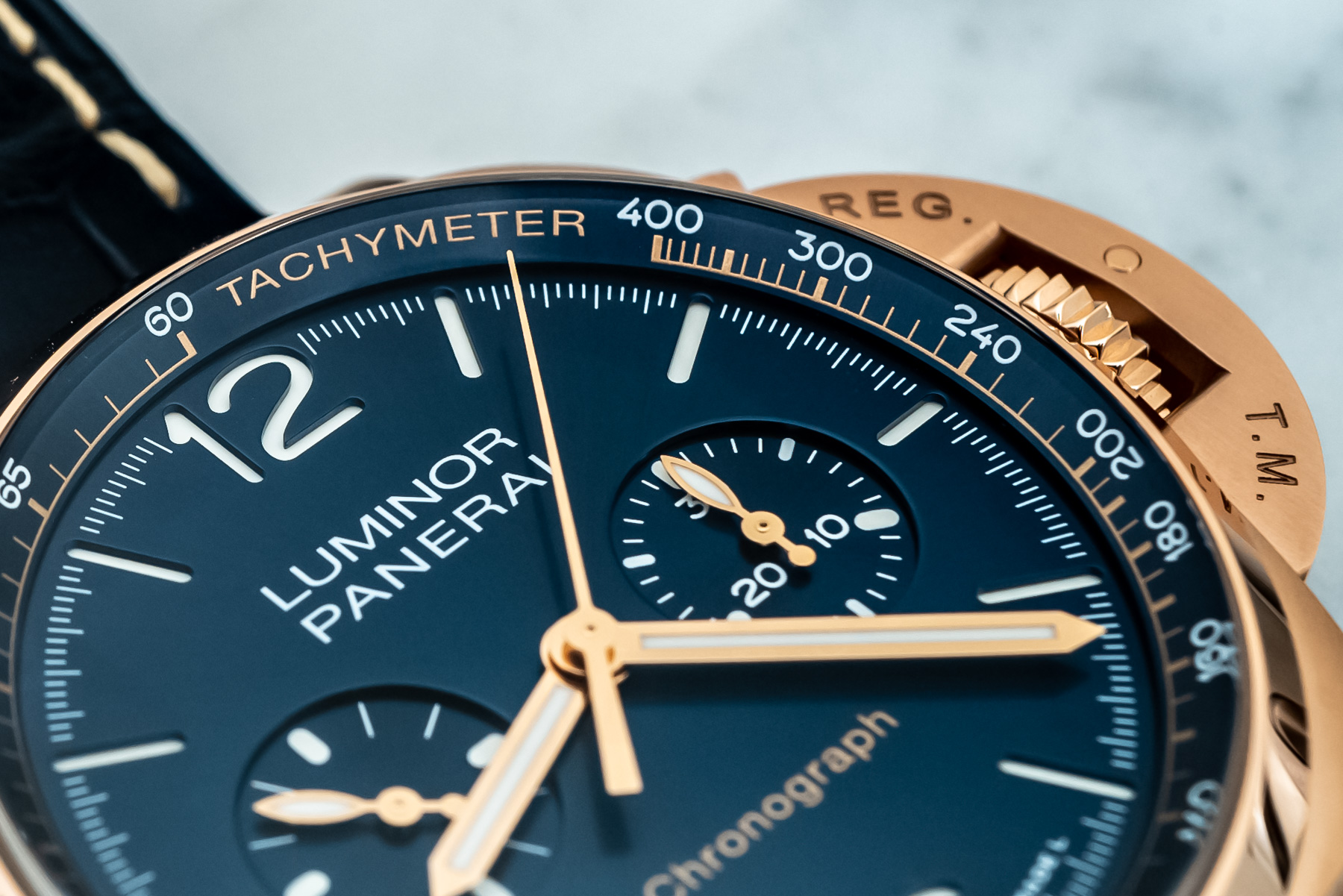 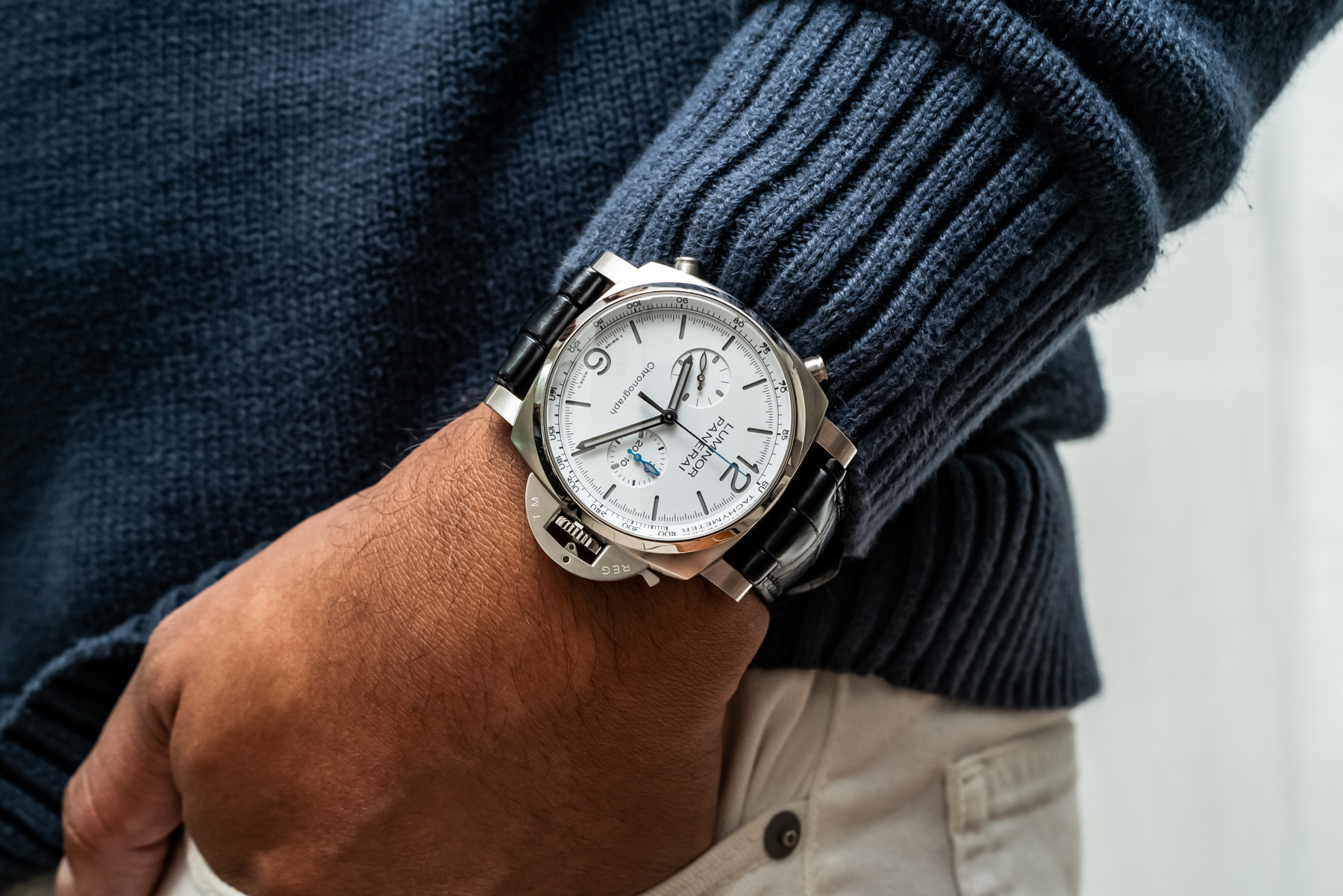 I spent some time with two iterations of the Luminor Chrono — the stainless steel white dial PAM1218 and the Goldtech Blu Notte PAM1111. While the steel and Goldtech models are essentially the same, there are small differences. The Goldtech PAM1111 has an exhibition caseback, but there really isn’t a view into the movement. Rather, there is a very nicely done embossed gold wave pattern over the sapphire. It’s ultimately frivolous, but the alternative would be to have a matching solid gold caseback. This does come at the expense of water resistance, with the PAM1111 achieving 50M as opposed to the steel models with 100M. I did chuckle at the irony of having the very serious-looking crown guard for 50M water resistance, but I have a feeling the buyer of a PAM1111 has other pieces (very likely other Panerai) in their collection that are more suitable for serious dives. 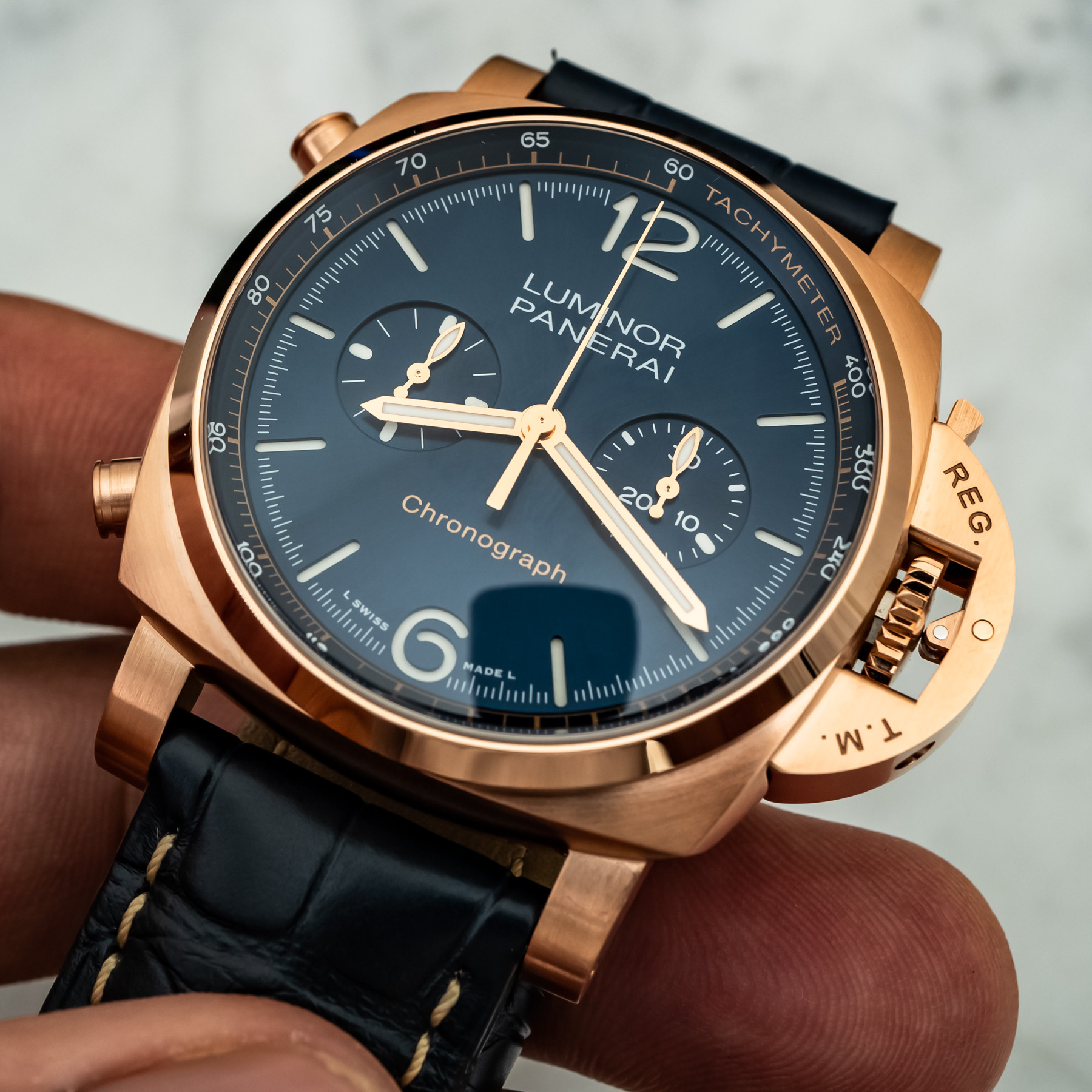 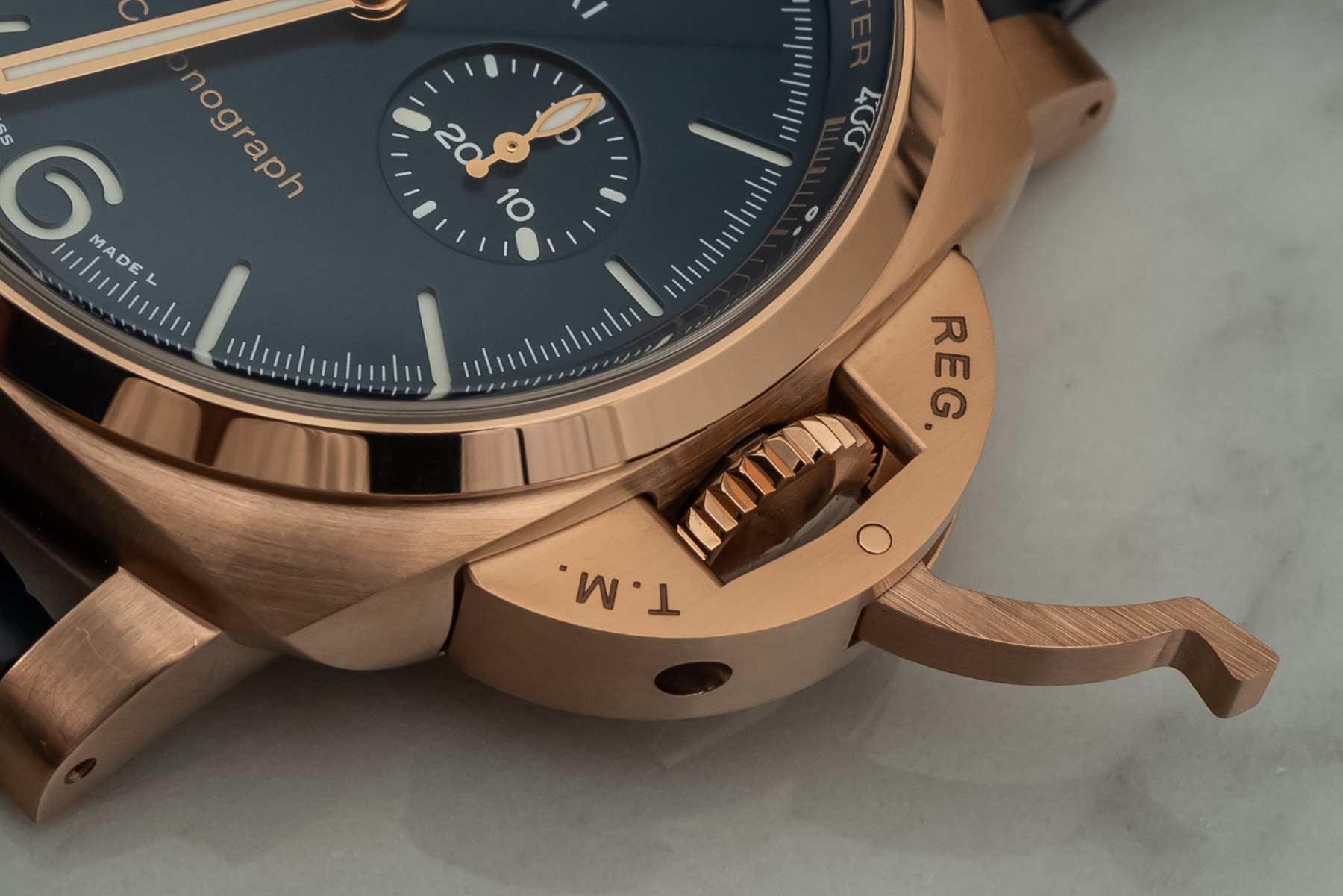 If you’re not familiar with the material, Goldtech is Panerai’s proprietary alloy with a higher percentage of copper and platinum that makes it a deeper color than typical rose gold while also being highly resistant to fading. Basically, Goldtech is for Panerai what Everose is for Rolex and Sedna is for Omega. The dial color on this model is Blu Notte, which translates to “night blue” and it is absolutely magnificent coupled with the Goldtech case. The blue isn’t this radiant in my photos, but it shines beautifully against direct light. Overall, it’s just a wonderful coupling of dial color and case material. 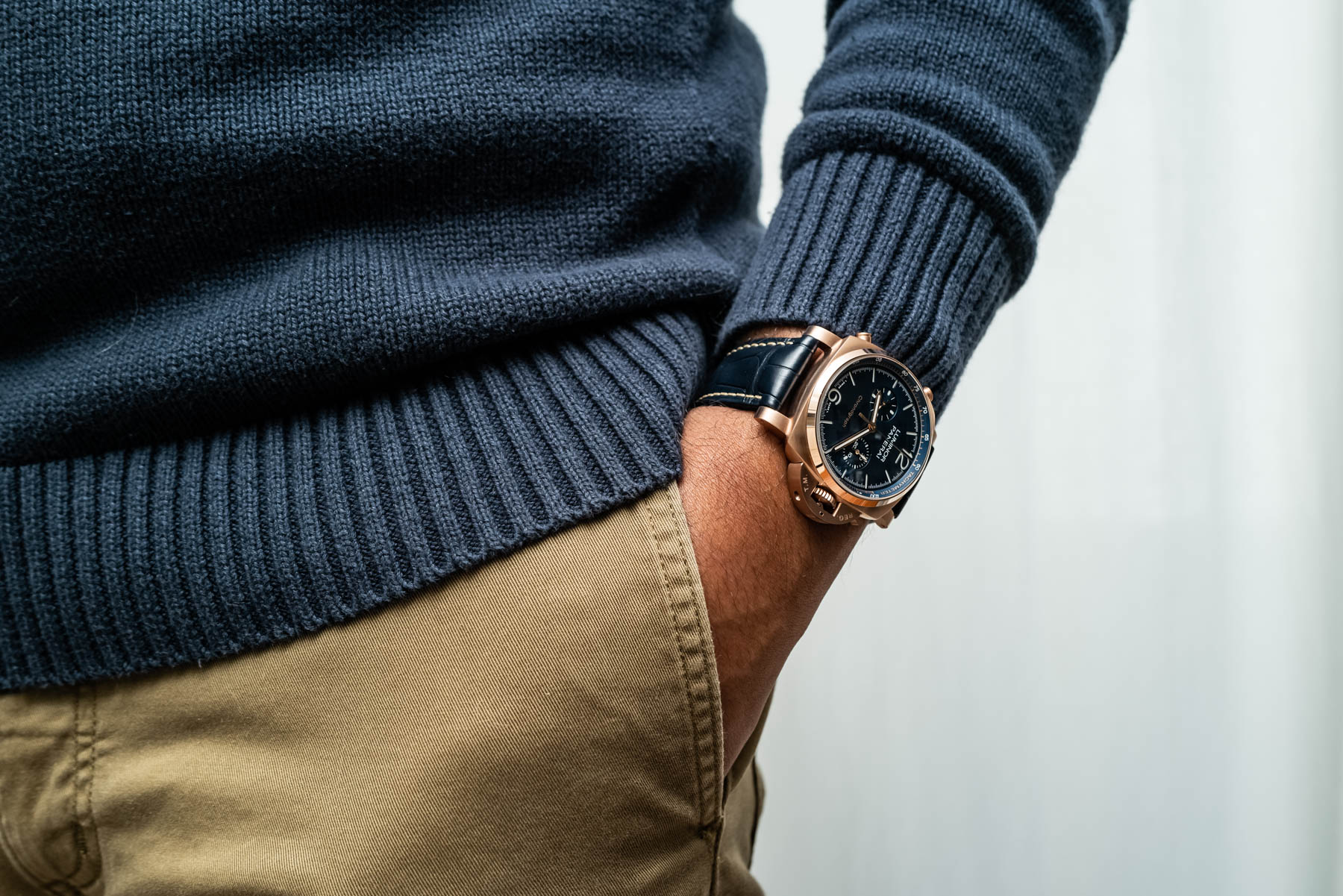 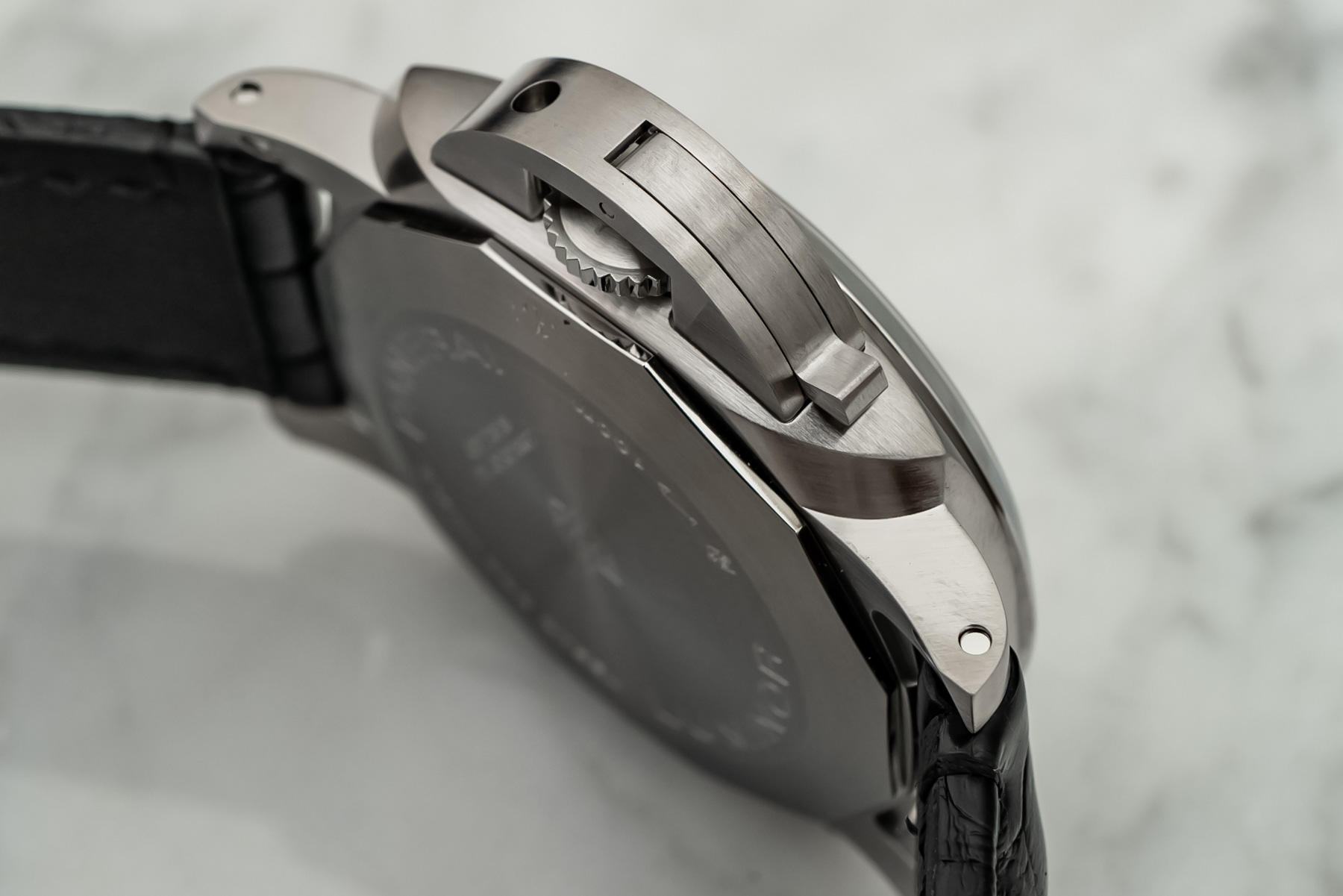 Size is always one of the first things that come up when discussing a new Panerai, so let’s just get that part out of the way. These new Panerai Luminor Chronos measure 44m-wide and have a lug-to-lug height of 53.8mm. The steel models with enclosed case back are 15.6mm-thick, and the Goldtech model is a little slimmer at 15.1mm. While these certainly fall into the “big watch” category, they certainly aren’t oversized or bloated. For comparison, while it’s a little thicker than the AP Royal Oak Offshore Chronograph, they both have just about identical lug-to-lug measurements. And it’s downright emaciated in comparison to the Omega Seamaster Planet Ocean Chronograph that comes in at a reasonable 45.5mm-wide but 19mm-thick, albeit with 600M of water resistance.

While I’d certainly prefer a 42mm case (which seems doable), I didn’t find the Luminor Chrono to be prohibitively large, either. 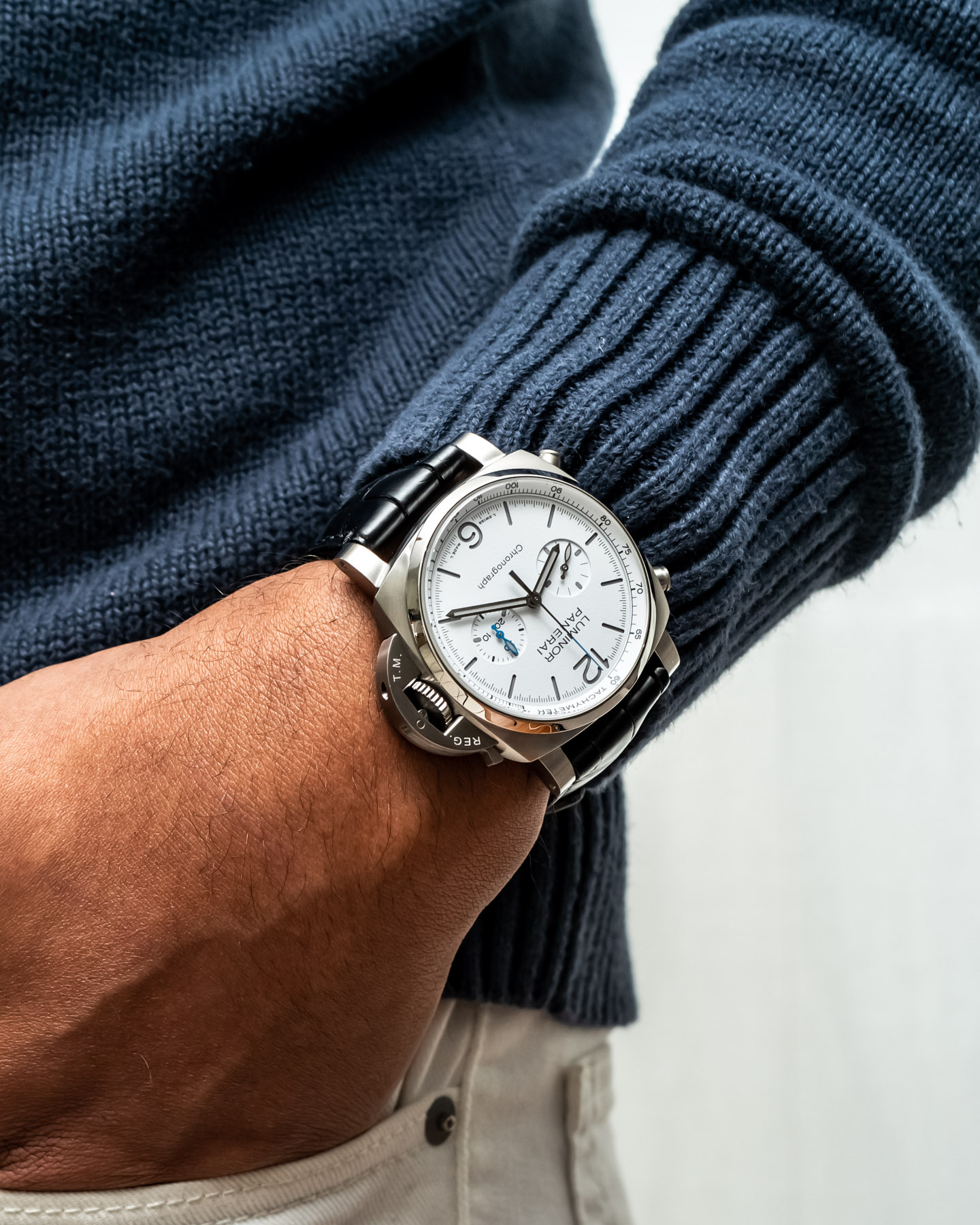 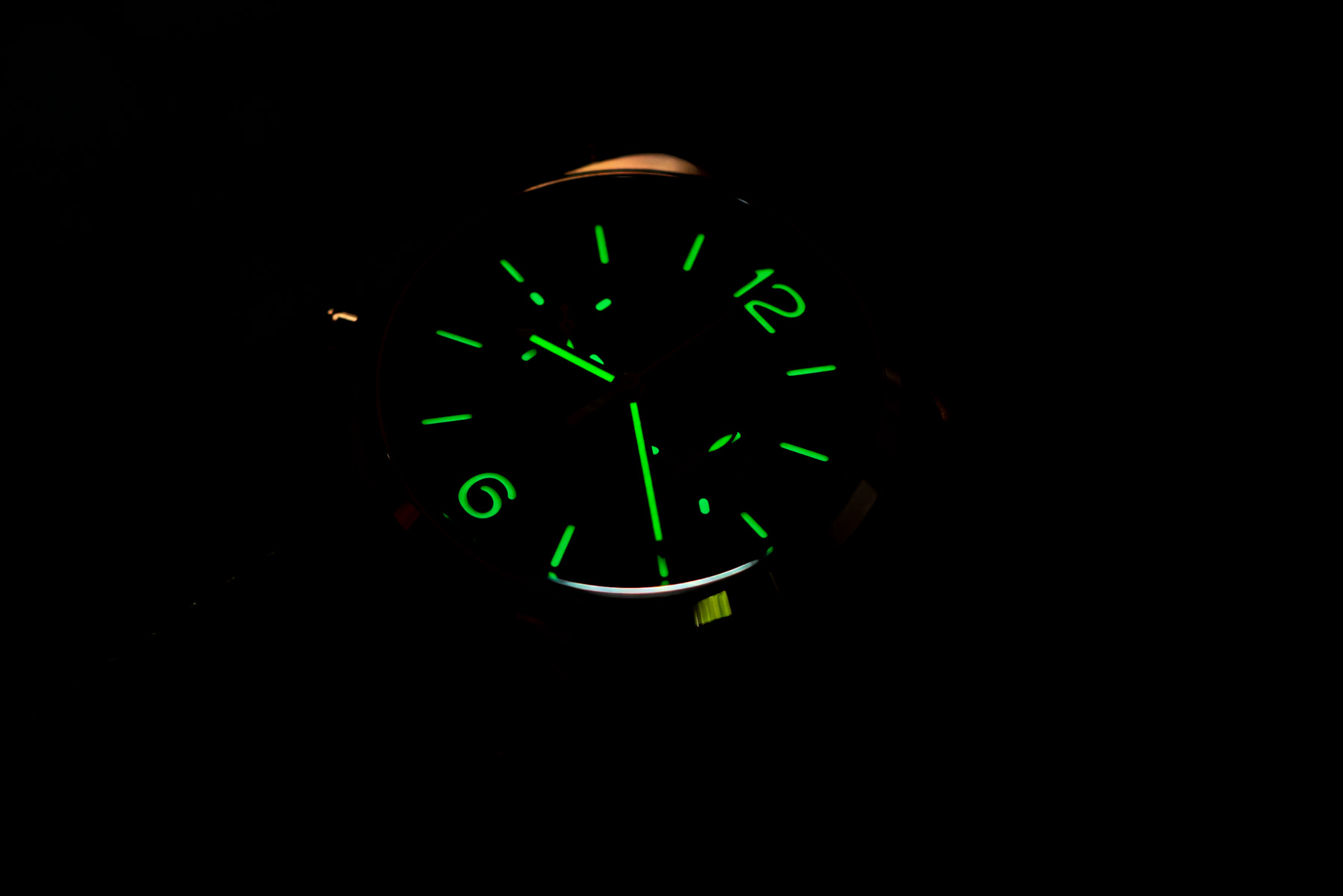 Considering the 44mm PAM1312 is by far Panerai’s best-selling watch, I don’t think the brand is in danger of alienating existing customers. As far as acquiring new customers in the crowded luxury chronograph market, we’ll just have to see. As for the dial, it is highly legible on both variants that I tried, and the lumed hands and sandwich dial are well finished, as is to be expected with about any modern Panerai. I suppose I would leave out the “chronograph” text at 6 o’clock since the pushers on the side of the case, as well as sub-registers on the dial, inherently make this point fairly thoroughly. 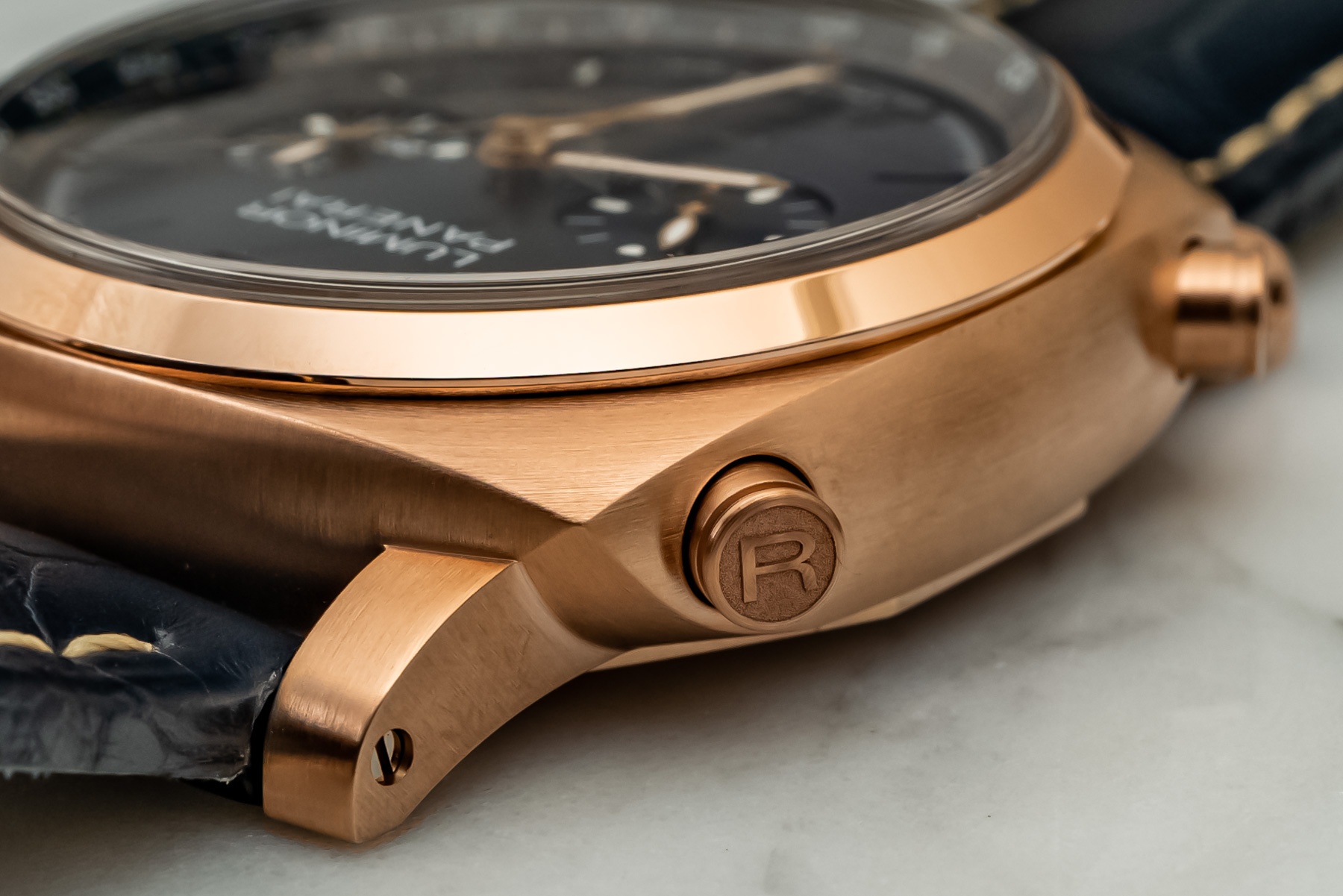 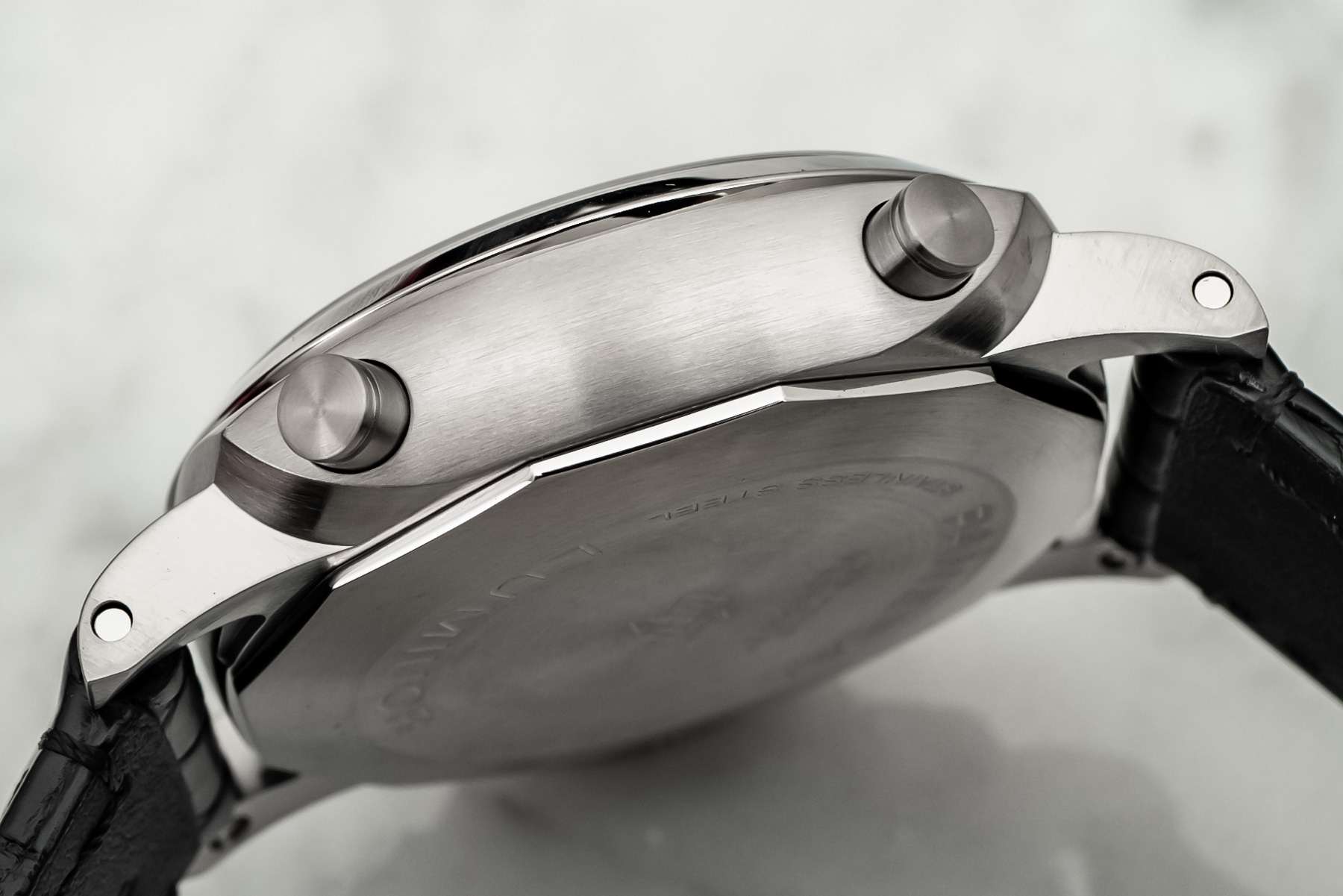 The case has a lot of nice lines and curves that add some real robustness and refinement to the total package. In fact, I did find that the interplay of straight and curved lines throughout the case helped to distract from the chunkiness that would be far more apparent on a more flatly finished case. The pushers on the left side of the case are nice and solidly built with a satisfying tactile feeling when pushed. They also don’t jab into the wrist, thankfully. Frankly, meeting these standards is about all I ask for when I wear a chronograph.

I know previous models used to have the chronograph pushers on the same side as the crown guard, which sounds chaotic in theory, but they didn’t look half bad to me. That said, I think moving the pushers to the left side of the case has the benefit of creating a little balance and (fine, I’ll say it) symmetry. 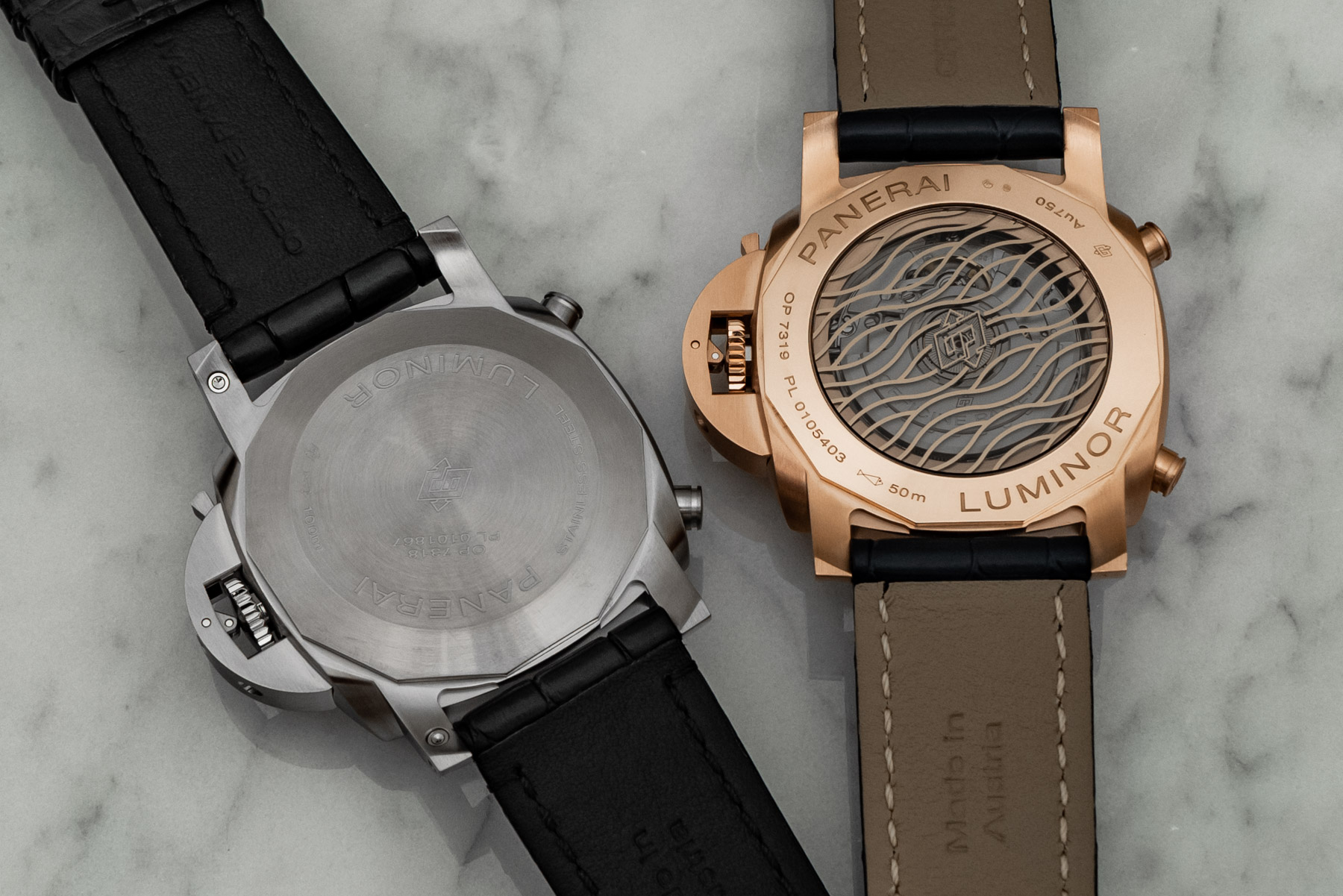 The new P.9200 movement debuts with these Luminor Chronos, and we will likely be seeing more of it as Panerai’s expansion into the chronograph market continues. In recent years Panerai has mostly focused on flyback chronographs outfitted with their first in-house automatic chronograph P.9100 calibre, though there were some truly special manual-wind chronographs, as well. In particular, I’m thinking about the limited Radiomir 1940 Chronographs from around 2014 that had the OP XXV calibre, which was based on a beautifully finished Minerva movement and priced starting at something like $60,000. These flyback chronographs, manual Minerva chronographs, and the occasional Rattrapante or Monopusher chrono make for a heady melange of collector-oriented and typically higher-priced niche pieces. 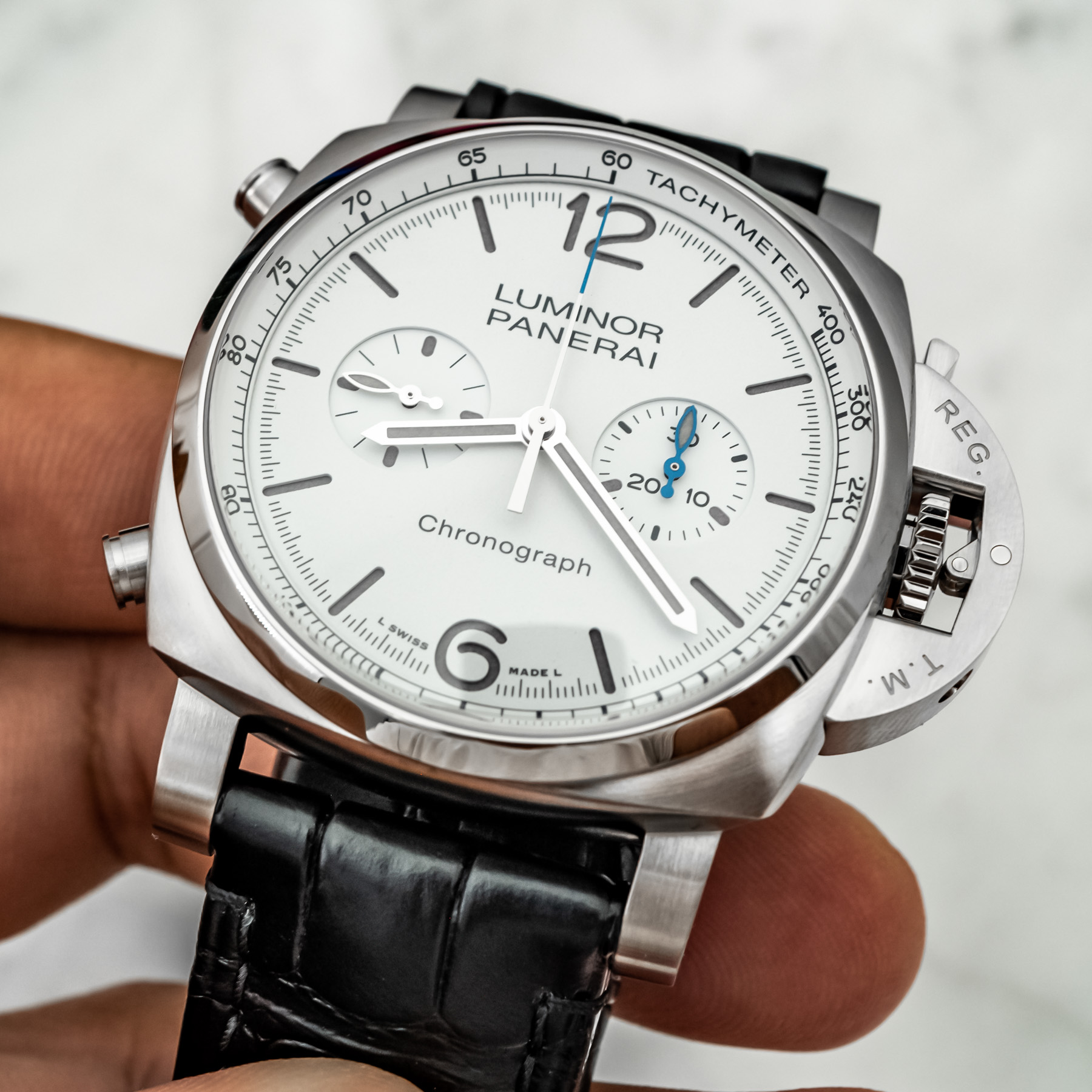 The history of classic chronographs for modern Panerai is not something I’m an expert on (though I do hope the Paneristi out there opine in the comments) but I do know they initially very briefly used the Zenith El Primero based OP IV caliber for the PAM52. A common variant of the old Panerai chronographs had the OP XII, which was a modified ETA/Valjoux 7753 as found in the old “Daylight” Luminor Chronos. 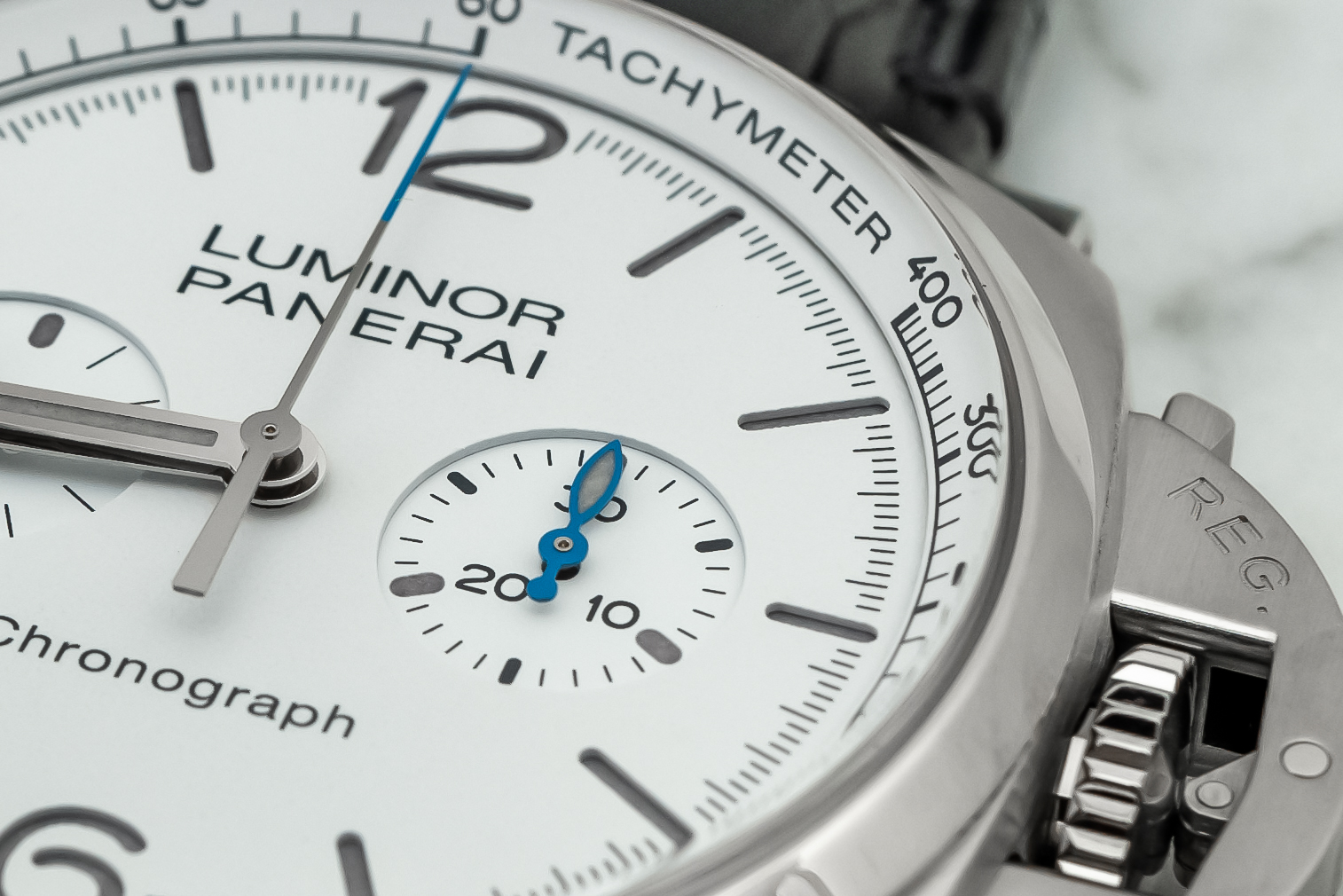 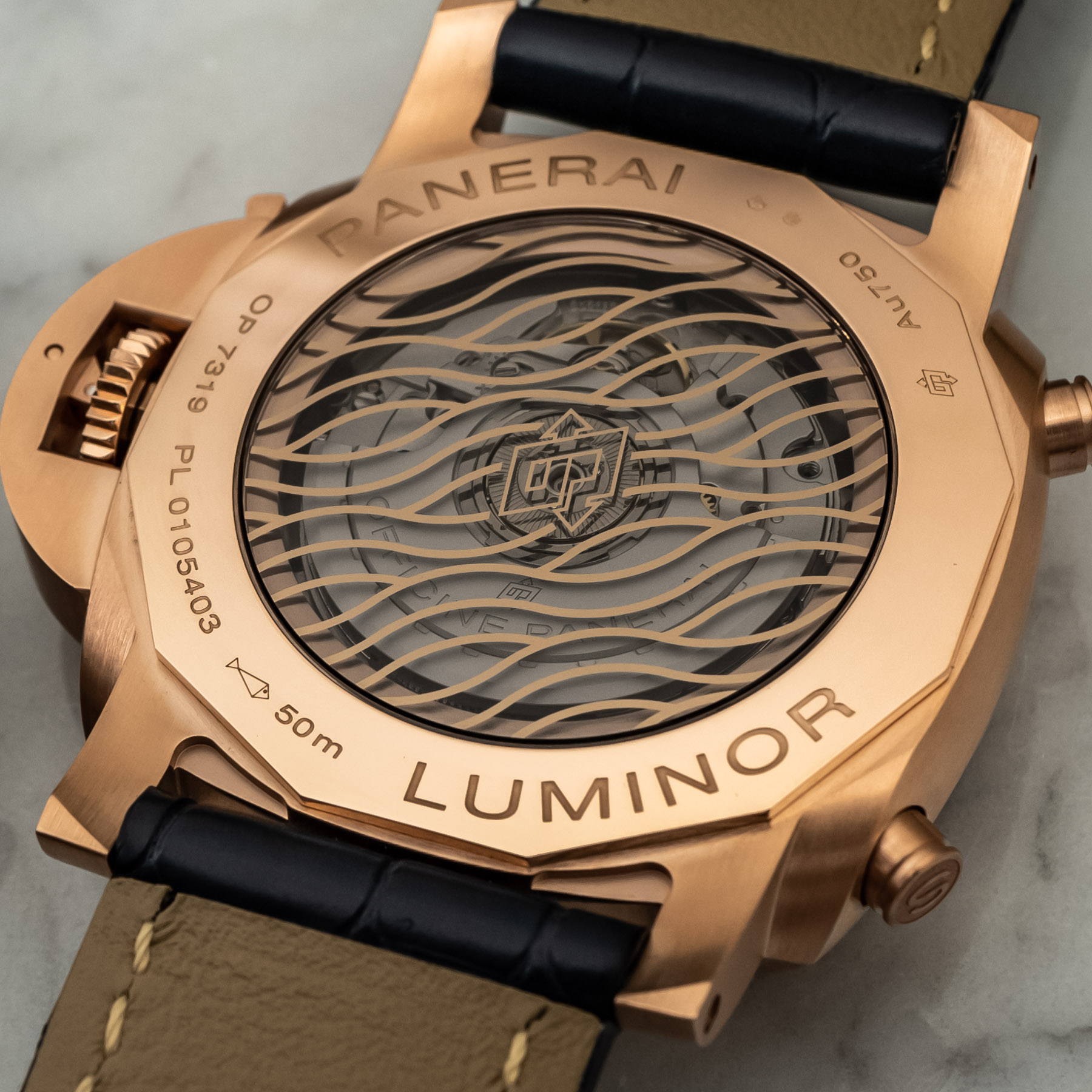 Now that Panerai has introduced the P.9200, I think we can expect more consistency in its simpler entry-level chronograph options. While not one of Panerai’s standout manufacture movements (which tend to begin with P.2XXX), the exclusive (not in-house) P.9200 will be a versatile staple chronograph for Panerai that has modern touches like a Glucydur balance wheel (an alloy that’s highly resistant to magnetism, extreme temperature, and corrosion) and Incabloc shockproofing. The P.9200 is based on a Swiss Made ETA 2892 with a Swiss Dubois-Depraz chronograph module over it. It has a frequency of 28,800 vph and a 42-hour power reserve. The power reserve is a deservedly easy nit to pick, especially if side-by-side with something like the Breitling B01 (70-hours and a column wheel + vertical clutch) but so much when compared to the new Speedy (50 hours), El Primero (50 hours), and IWC caliber 69385 (46 hours). 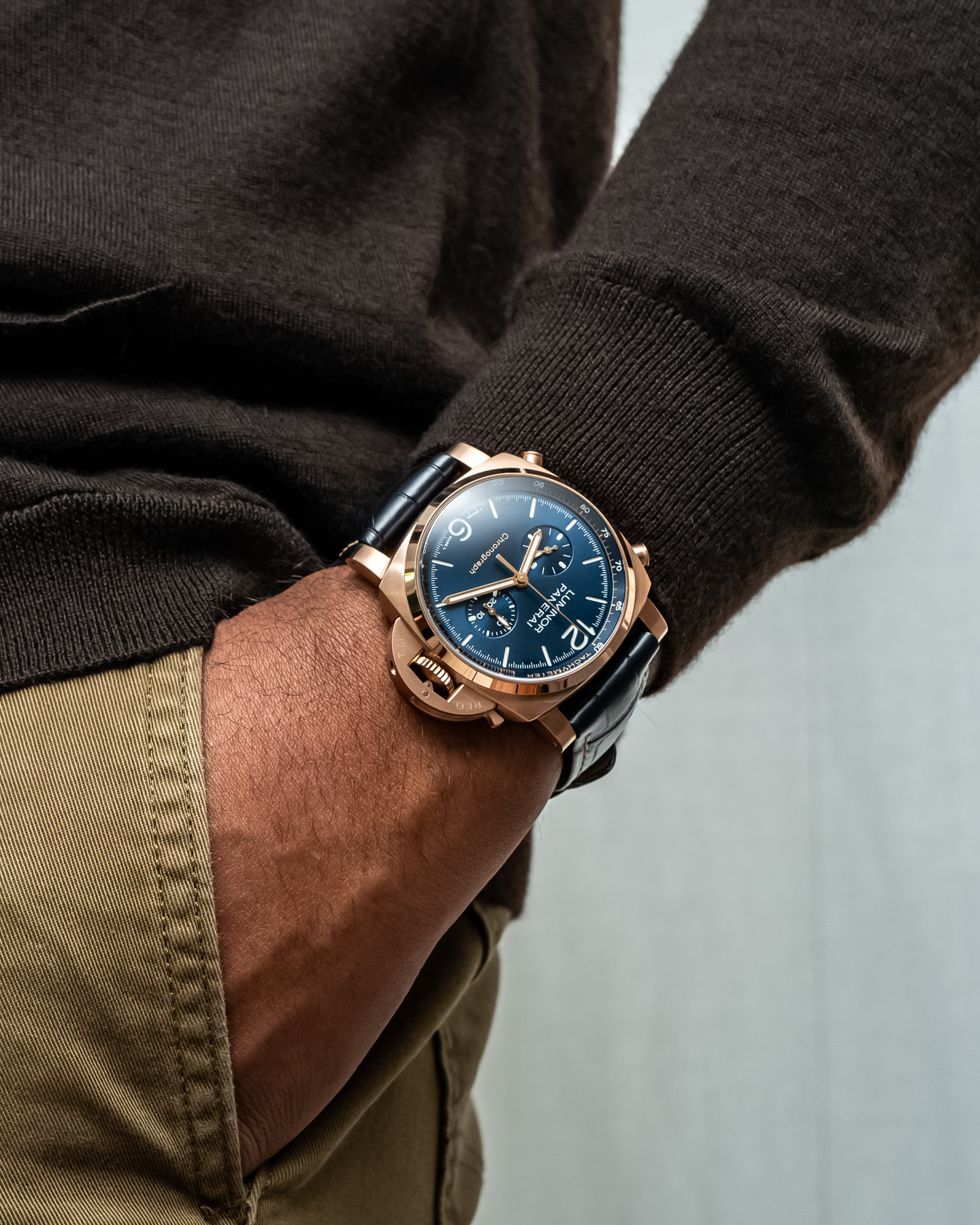 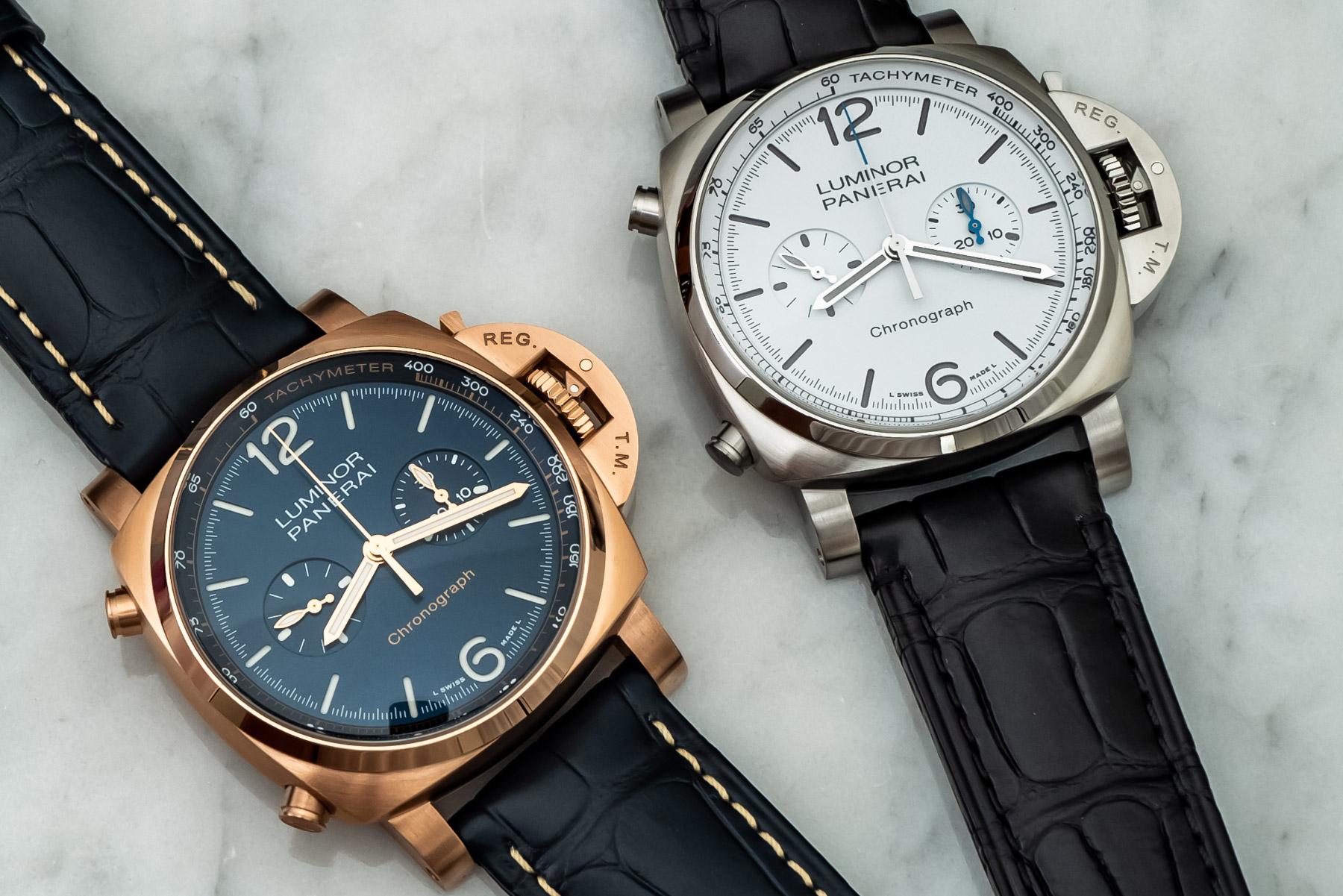 The Panerai Luminor Chrono lands in a crowded and highly competitive luxury chronograph market and only time will tell how they perform. That said, the watches are very impressively finished when handling them in the metal and my instinct tells me Panerai will sell a lot of these once consumers get their hands on them in boutiques and retailers. I found that the case and dial punch above their weight class, though the power reserve and water resistance may turn some people off. For the former, I think having a power reserve that’s a day or so shy of what you prefer typically seems more significant in theory than in practice. But that’s just me. As for the latter, only the user knows how they’re going to use their watch, so if 100m (or 50m for the Goldtech model) isn’t adequate, then it’s likely not for you.