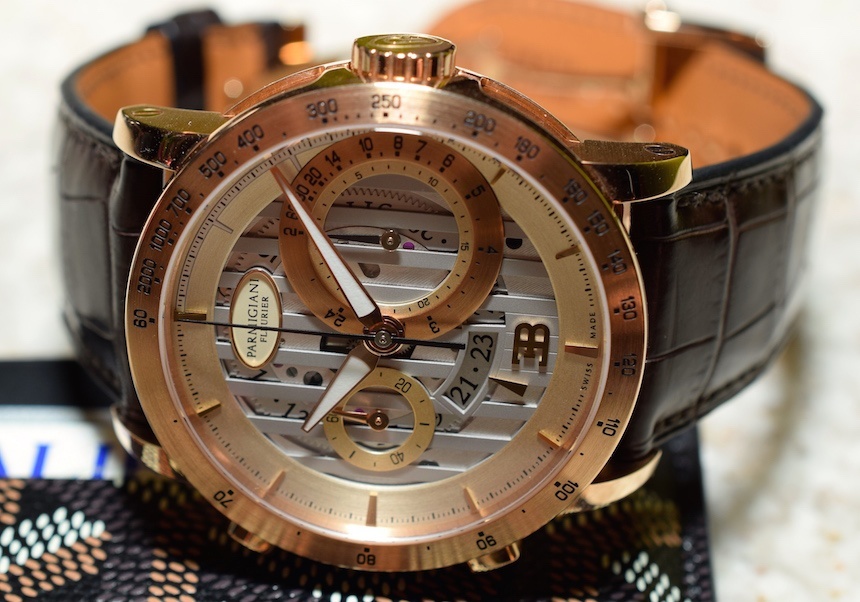 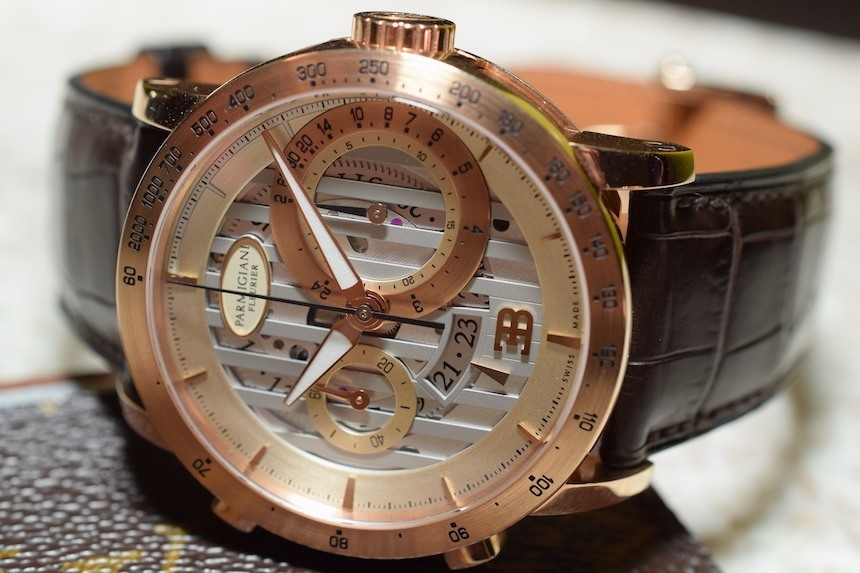 Parmigiani Fleurier has had a long standing relationship with supercar maker Bugatti. Some of the watches produced as part of this relationship are unique, for instance, the exclusive and pricey Parmigiani Supersport driving watch. However, Parmigiani also makes other “Bugatti” watches that are more affordable while still capturing the contemporary character of the brand and of the recent Bugatti car. The Parmigiani Atalante Flyback Chronograph Bugatti is such a watch. 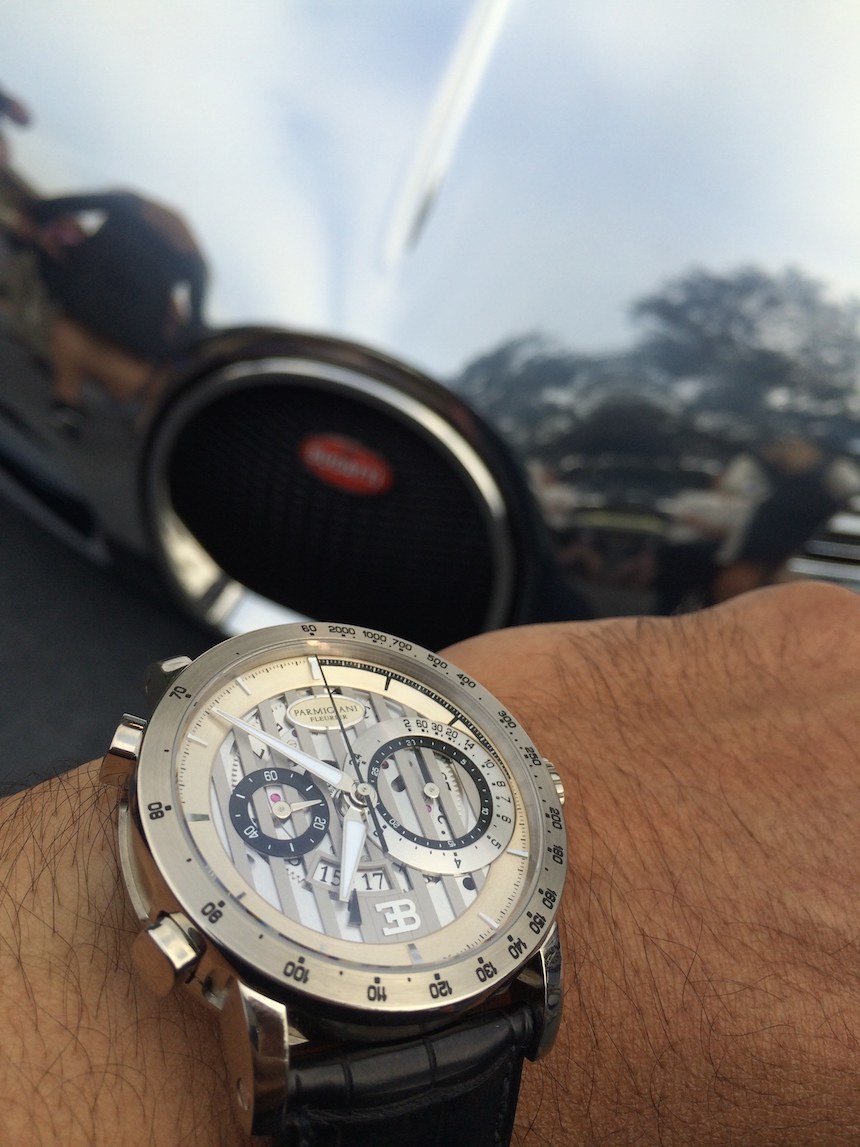 The partnership between Parmigiani and Bugatti makes sense, as both brands have similar values and history. They are both modern, boutique, exclusive, luxury brands with a deep expertise in making mechanical marvels. In Bugatti’s case, their Veyron is a modern supercar with an unparalleled mechanical engine and performance. The Veyron holds the world record for fastest production car on the planet. And Parmigiani makes some of the finest contemporary timepieces with unique in-house movements. One example that celebrated the partnership is the Supersport driving watch with 10 days power reserve. This followed an earlier award winning model that the brand released about 10 years earlier, when the relationship had just started. 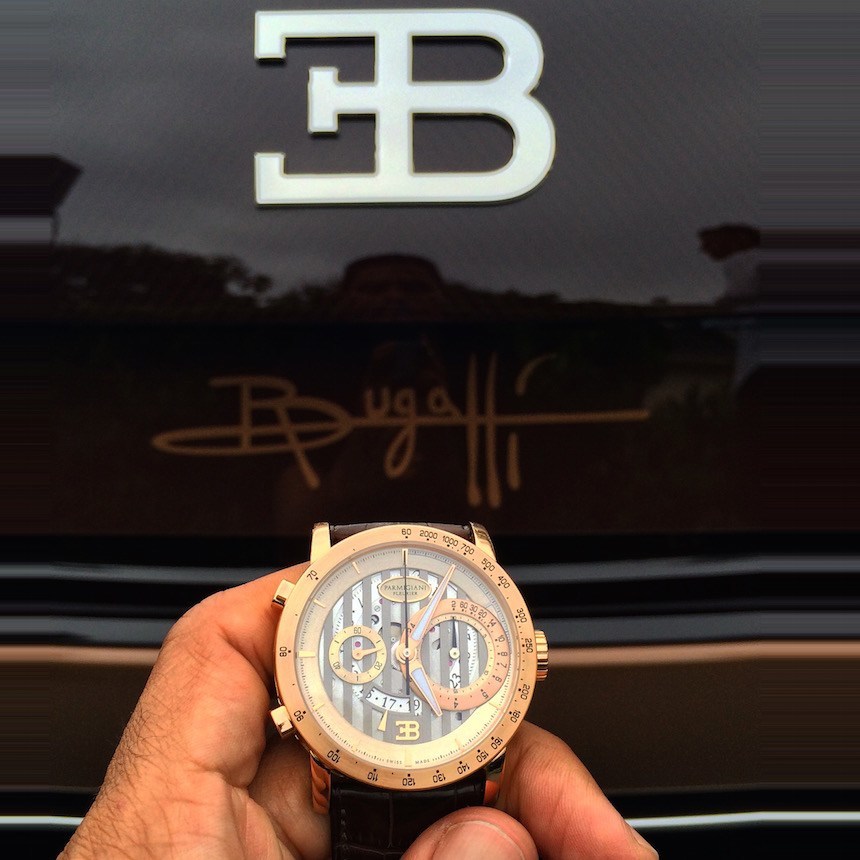 While the Supersport watch is an incredible example of the Parmigiani-Bugatti partnership, Parmigiani also offers a series of more affordable Bugatti watches. All are nonetheless exclusive, but instead of the $430,000 price tag, they are in the more approachable 5 digit figures. One such model, is the watch I am reviewing here.

The Parmigiani Atalante Flyback Chronograph Bugatti watch is in the tradition of classic car racing watches with a tachymeter on the bezel and a flyback chronograph with an off centered 30 minutes counter on the dial. However, while the tachymeter is similar to other watches in the car racing style, that’s also where the resemblance ends. The Parmigiani Atalante Flyback Chronograph Bugatti has a unique dial that is skeletonized to give it the look of a pre-war era Bugatti grill, under which one can admire the in-house movement along with rubies and the date wheel. The patented Parmigiani delta hands, which are filled with SuperLuminova, complete the sporty, yet refined and classy dial. 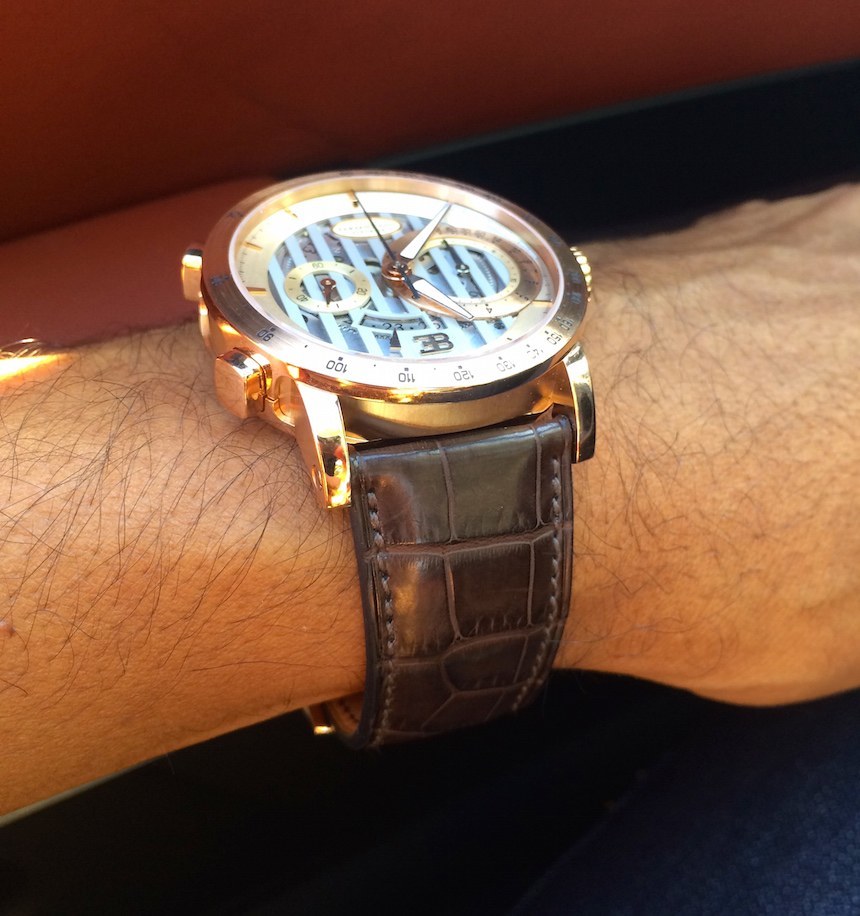 Among the two other unique characteristics of the watch are the reverse chronograph pushers; instead of being on the right of the case, on each side of the crown, they are instead on the other side of the case. This is done to allow easier operation while driving. After all, if you own any version of the car whose logo is tastefully applied on the dial at 6 o’clock, you will be likely have an urge to drive the car at the racetrack and time your laps. 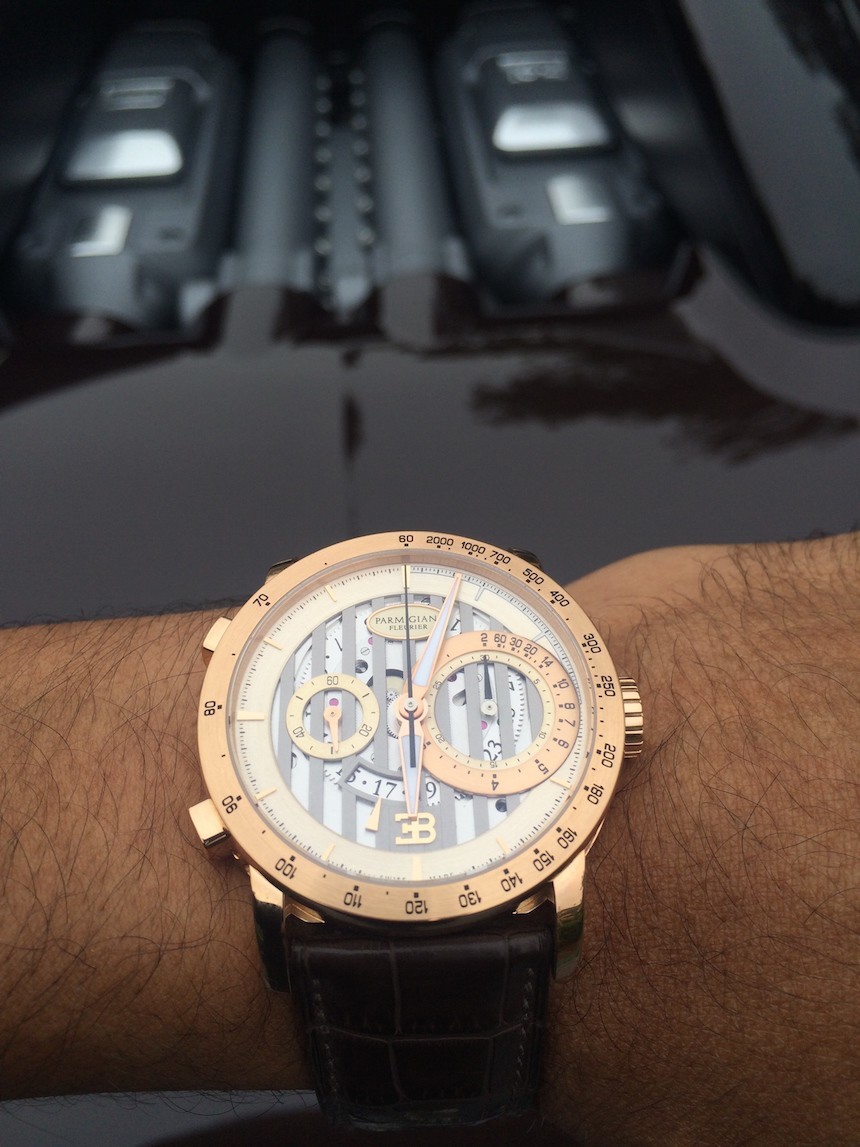 The other unique characteristic of the watch is that the chronograph totalizer also has an additional tachymeter to measure average speed when a lap takes more than one minute. So, for instance, a five-minute measurement for a mile lap shows 15 mph and a 10-minute measurement shows 6 mph. This can be used for other track measurements, such as longer 10 mile track, and multiplying the tachymeter measurement by 10, or for running where the values will just measure the average speed of your one mile lap.

One of my favorite aspects of this watch is the case. At 43 mm with a lug to lug measurement of 50 mm and standing at 12 mm high, the case sits perfectly on the wrist and makes the Parmigiani Atalante Flyback Chronograph Bugatti very wearable as a sports as well as an evening watch. The pure rose gold of the case is extremely well crafted with a combination of polished and inner brushed sections that work brilliantly.

The in-house flyback chronograph movement is visible on the sapphire case back showing the gold rotor that is tastefully decorated. As I mentioned before, the movement is reversed, with the chronograph pushers on the left, which facilitates usage at the track. 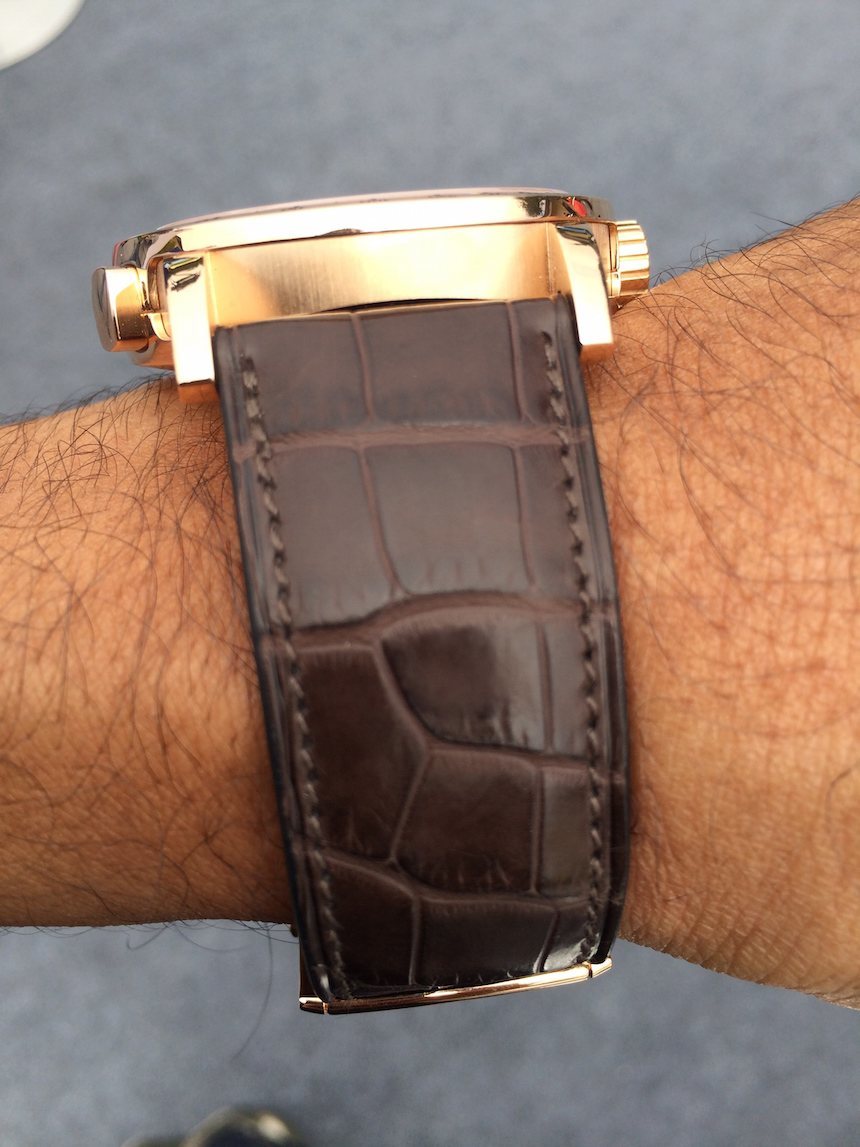 Like all Parmigiani watches, the strap is from the legendary French leather goods artisan, Hermes. It’s a rich brown alligator that is supple yet firm. It screams high quality and blends perfectly with the warm rose gold case. The clasp is also rose gold and is stamped with the Parmigiani Fleurier (PF) logo.

The clasp is secured with two push buttons that need to be pressed simultaneously to release it. While never failing to open, you do need to press both sides at once and about the same amount to release the buckle. This results in a folding clasp and buckle that is easy to operate yet provides a secure feeling on the wrist for what is overall a heavy watch due to the gold material. The total weight is just under 160 grams. 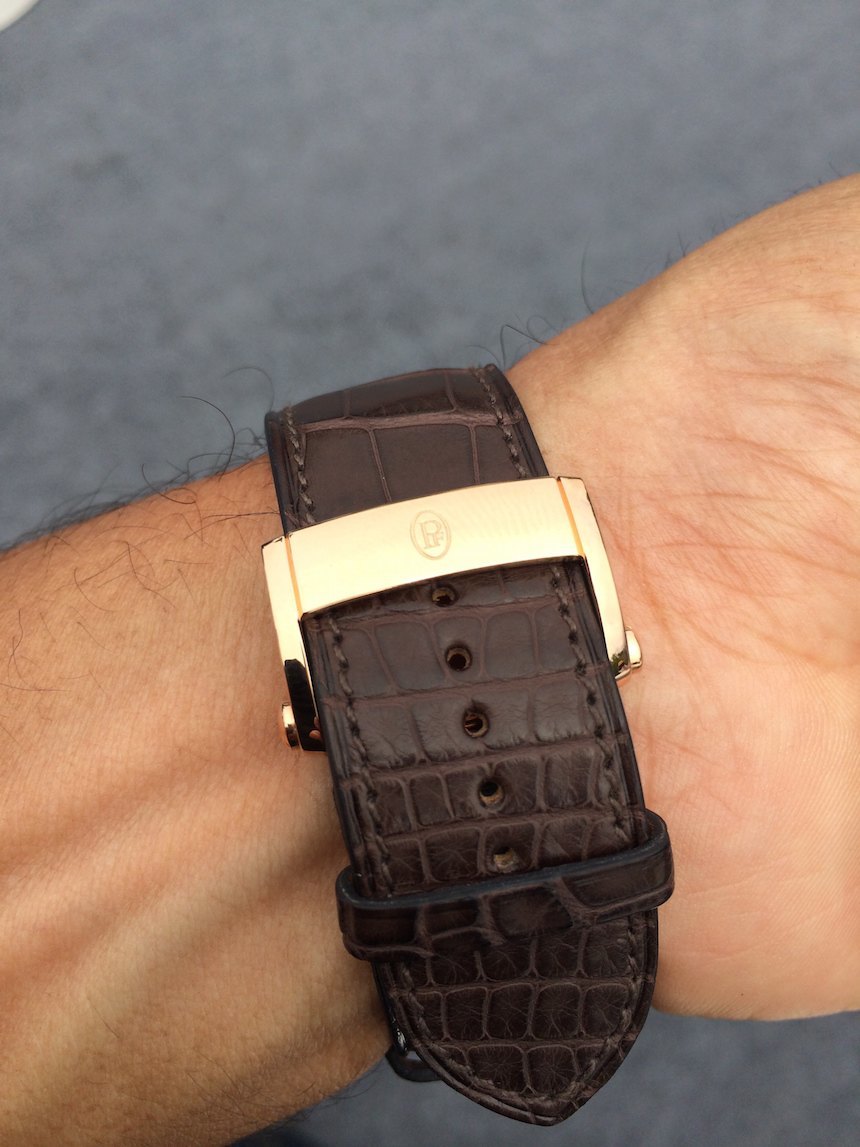 At a retail price of just above $53,000, this is not a watch for everybody – and it’s not meant to be. The Bugatti connection and chronograph means that this is a watch for car enthusiasts. However, the striking looks of this watch make it also just contemporary art on the wrist. It matches both brands and will satisfy the modern stylish person who is sporty and wants a watch that he will likely be the only one to wear at any event he attends. parmigiani.ch 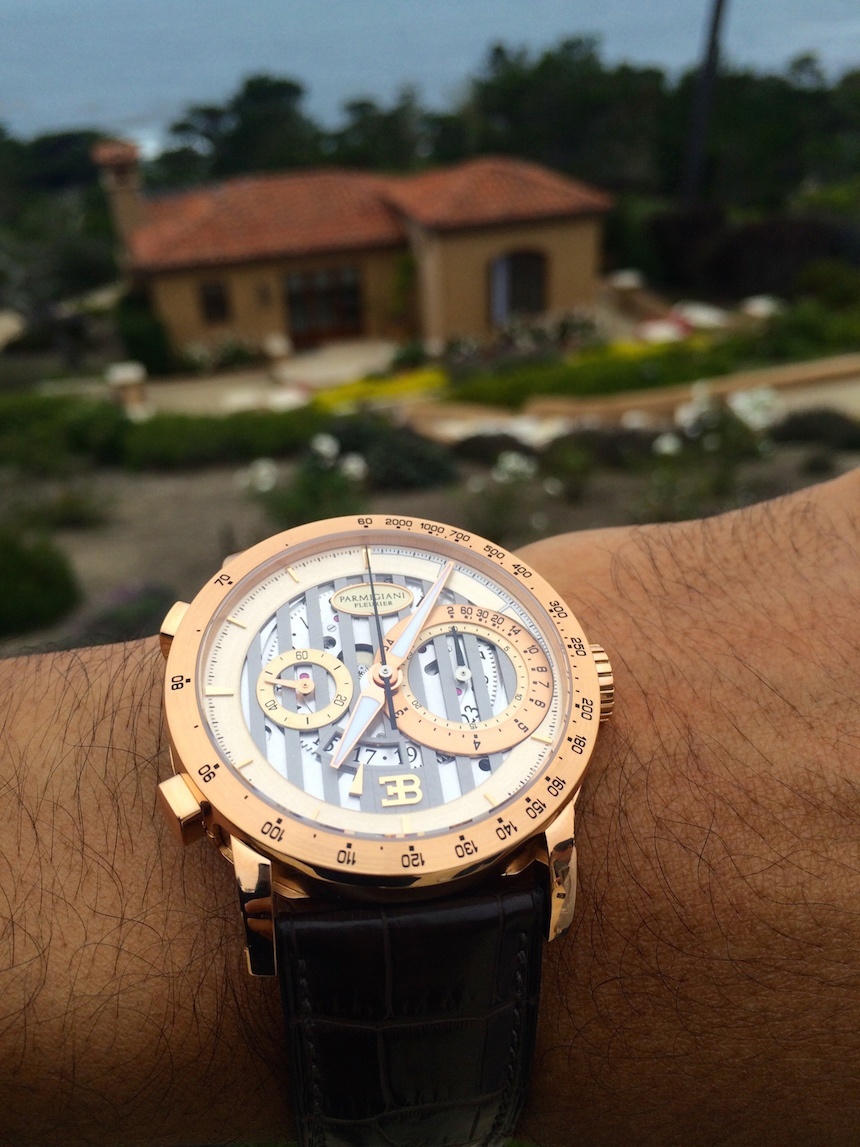 Necessary Data
>Brand: Parmigiani Fleurier
>Model: Atlante Flyback Chronograph Bugatti
>Price: $53,000
>Size: 44mm wide x 14mm high (50mm lug to lug)
>Weight: 160g on strap
>Would reviewer personally wear it: Yes, absolutely
>Friend we’d recommend it to first: The guy who owns or aspires to own a supercar, who is sporty and does not want the de-facto Rolex Daytona, and for whom price is of little concern.
>Worst characteristic of watch: Not having a 12 hour subdial and the reverse pushers take a little getting used to. The movement, while striking and elegantly finished, is shown via a small sapphire glass window. I wonder if a solid caseback with some Bugatti imprint would have been better?
>Best characteristic of watch: The unique stripped skeleton dial and hand crafted rose gold case, just sublime.