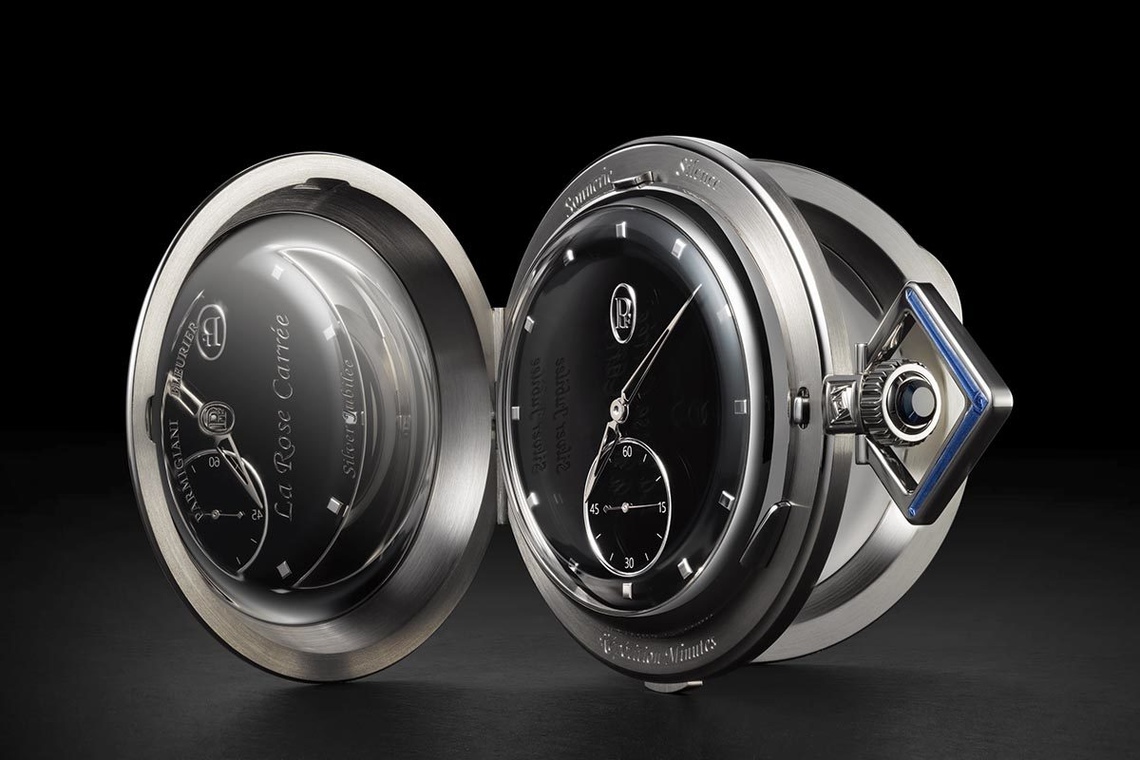 Parmigiani Fleurier Celebrates Its 25th Anniversary With A Horological Marvel 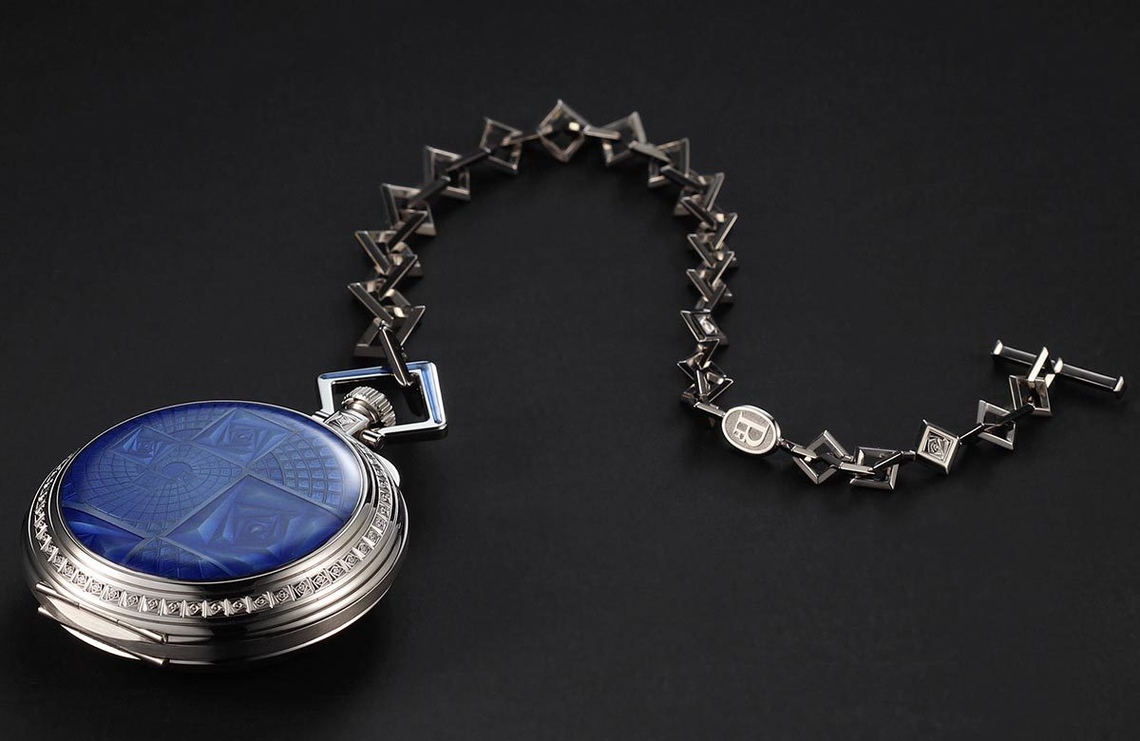 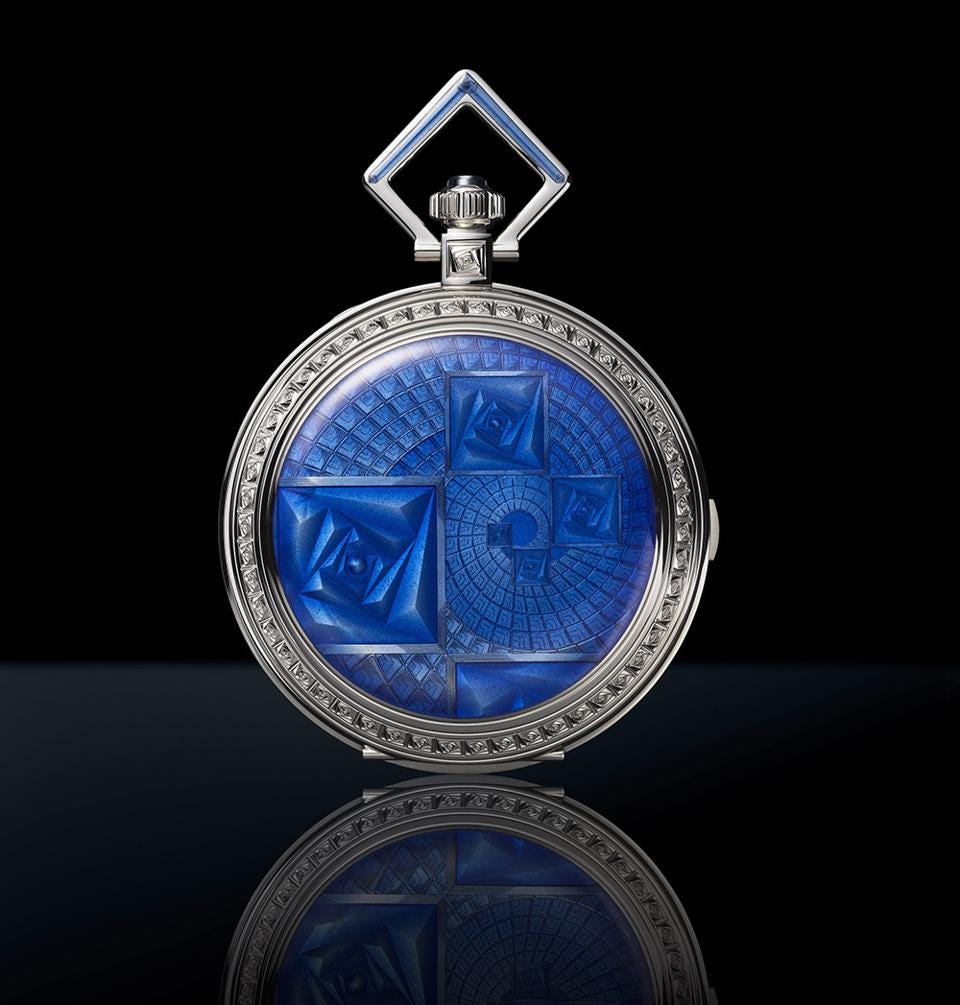 Michel Parmigiani & The Art Of Restoration

While many well-respected independent watchmakers have experience in restoration, perhaps the most striking example of a contemporary watchmaker’s blending of traditional watchmaking techniques with modern functionality can be seen in the work of Parmigiani Fleurier’s founder, Michel Parmigiani.

Following his watchmaking studies at the Val-de-Travers school and at the Technicum in La Chaux-de-Fonds in the 1960s, Mr. Parmigiani began specializing in restoration, establishing a restoration workshop in Couvet in 1976. Soon thereafter, Parmigiani was named the official restorer of the rare and exceptional horological artifacts owned by the Sandoz Family Foundation. Restoring these antiquities gave him a new appreciation for the quality and artisanship of mechanical timepieces from a bygone era. Parmigiani’s historical knowledge combined with the experience he gained through four decades of restorative work laid the foundation for the Parmigiani Fleurier brand. His passion for the craft of restoration is adequately captured by his words: “It is a rare joy to restore a work of watchmaking. To free it from the ravages of time and men is to reinstate it in a temporal truth essential to our memory.” 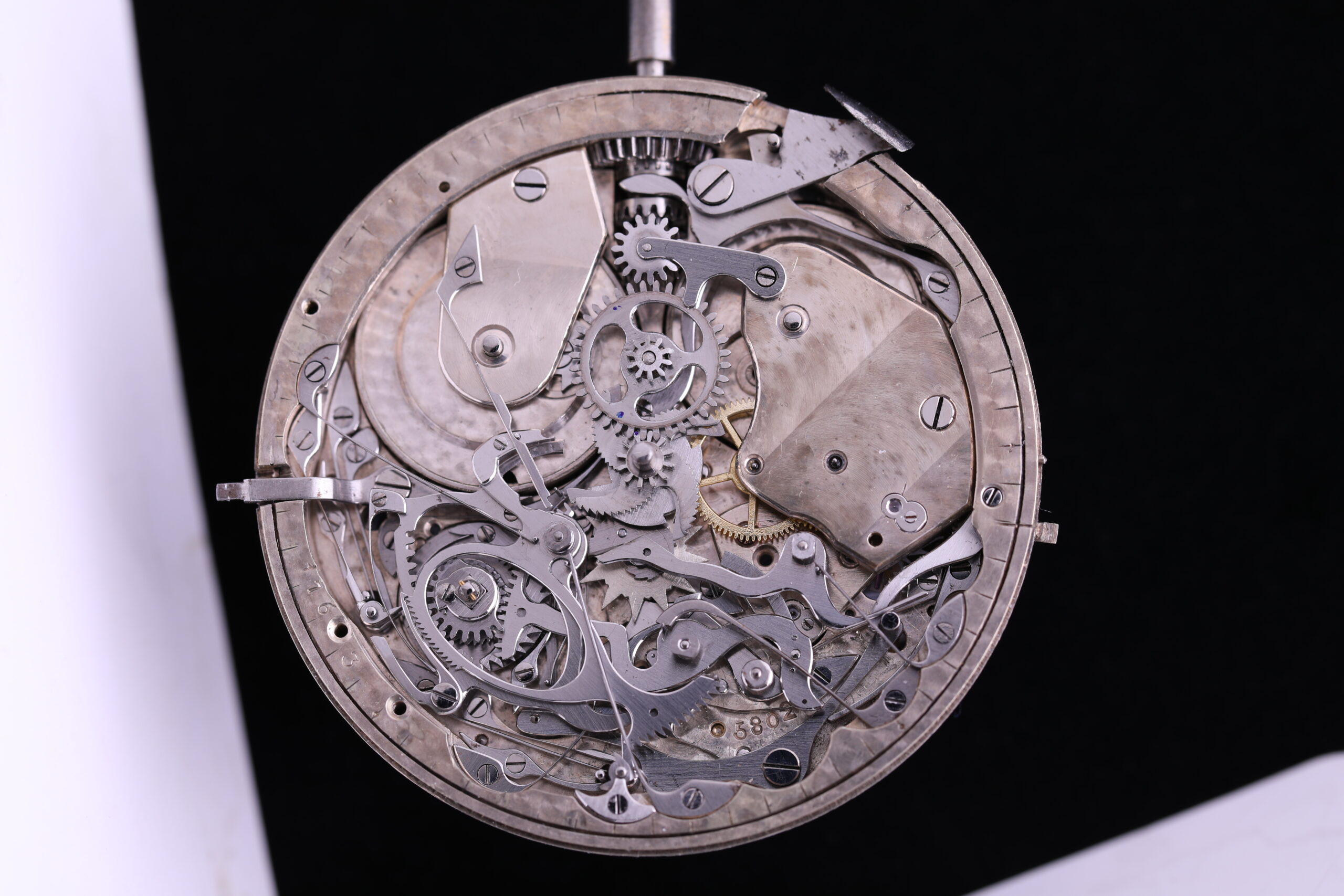 In the late 1990s, Parmigiani acquired a rare and unique grand sonnerie and minute repeater pocket watch movement made by legendary grand complications watchmaker Louis-Elisée Piguet, sometime between 1898 and 1904. For more than two decades, the movement stayed dormant, waiting to be put to use.

Last year, the newly appointed CEO of Parmigiani Fleurier, Guido Terreni, wanted to celebrate the brand’s 25th anniversary in a memorable and novel way. Thus began the project of La Rose Carrée. Terreni wanted to create a piece that embodied his personal vision, as well as the totality of Parmigiani Fleurier’s watchmaking prowess and Michel Parmigiani’s restorative genius. Less than a year later, La Rose Carrée was brought to life. With this 64mm pièce unique pocket watch crafted out of solid white gold, Parmigiani’s restoration expertise is on full display. 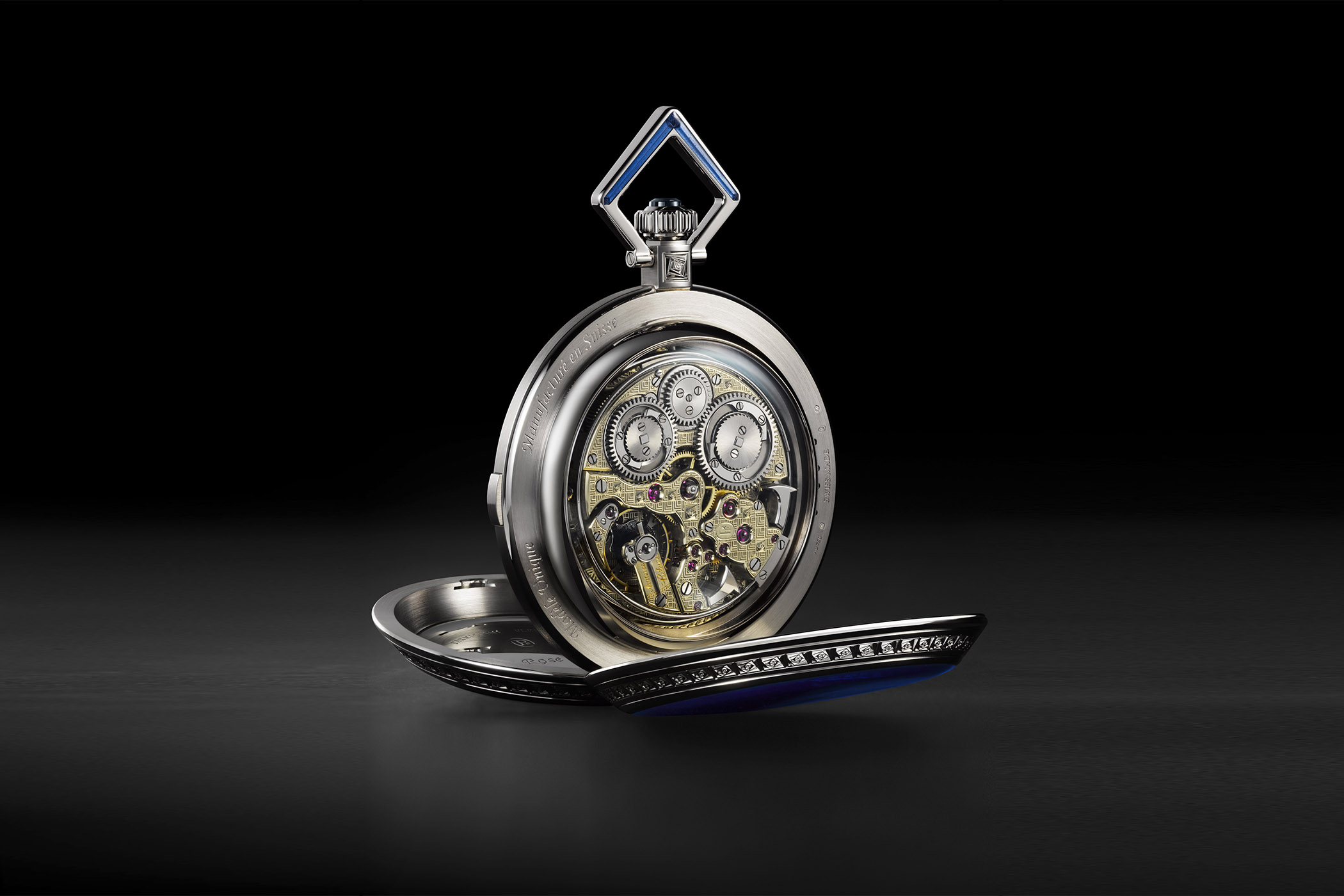 Michel Parmigiani once said, “Art is all around us; it is in nature, in the harmony of its proportions, and in the attention paid to each detail. A world of wonders is unveiled to those who have learned how to look.” The guiding principle that art is derived from nature is evident in all of Parmigiani’s designs, including La Rose Carrée.

La Rose Carrée, meaning “squared rose,” is a beautiful geometric motif engraved throughout the movement and case of the watch. The pattern is inspired by the form embodied by rose petals when they start to wither. The motif also follows the mathematical proportions of the Golden Ratio, which is thought to represent perfect harmony and proportion. The Golden Ratio can be found throughout nature, such as on leaves, flower petals, and nautilus shells. 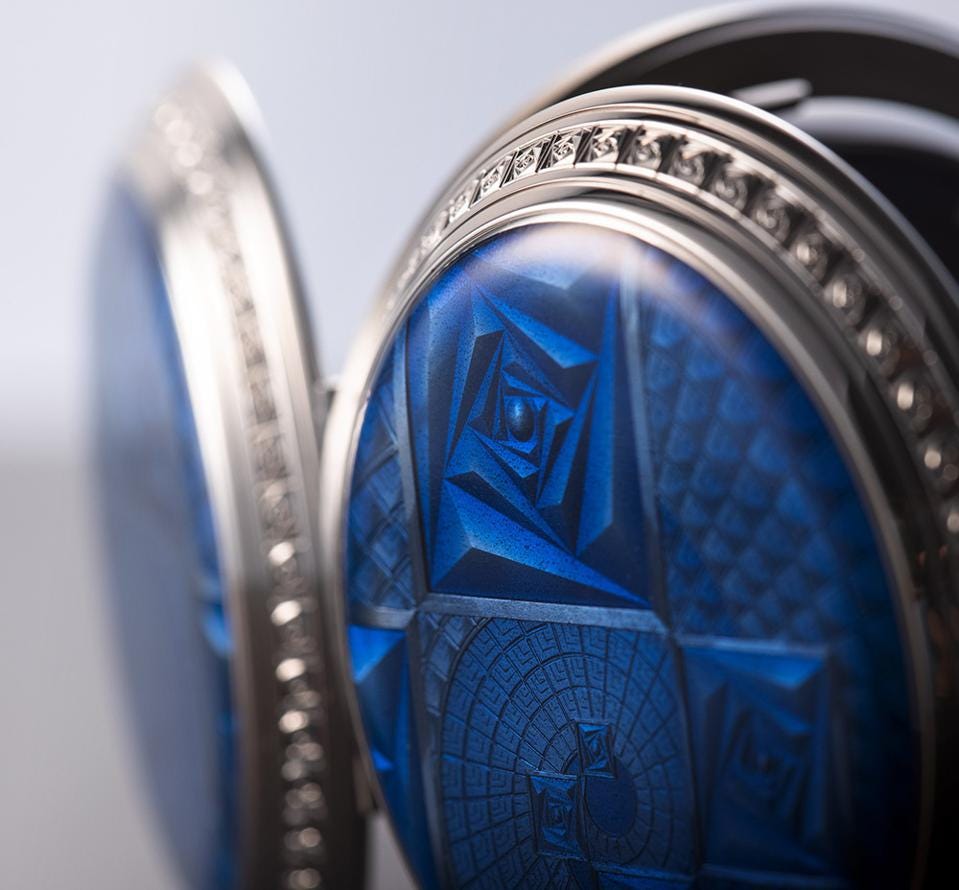 The Caliber 5802 manually wound movement beating inside La Rose Carrée is an exceptionally rare one, with only about 230 in total having been produced. Parmigiani has restored Louis-Elisée Piguet’s movement to its original glory and more, thanks to the world-class artisans at PF’s restoration workshop.

Francis Rossignol and Christie Girel, two of Parmigiani Fleurier‘s master watchmakers, were tasked with restoring the historic movement. This comprehensive process consisted of complete disassembly, cleaning, adjustment, fabrication of any parts that needed replacing, and decoration. From the radial, solar graining on the barrel-winding wheels to the perlage on the bridges and the black-polished grooves and clicks, Rossignol and Girel have decorated the movement with exacting detail, yielding exquisite results that will no doubt impress even the most discerning eyes. 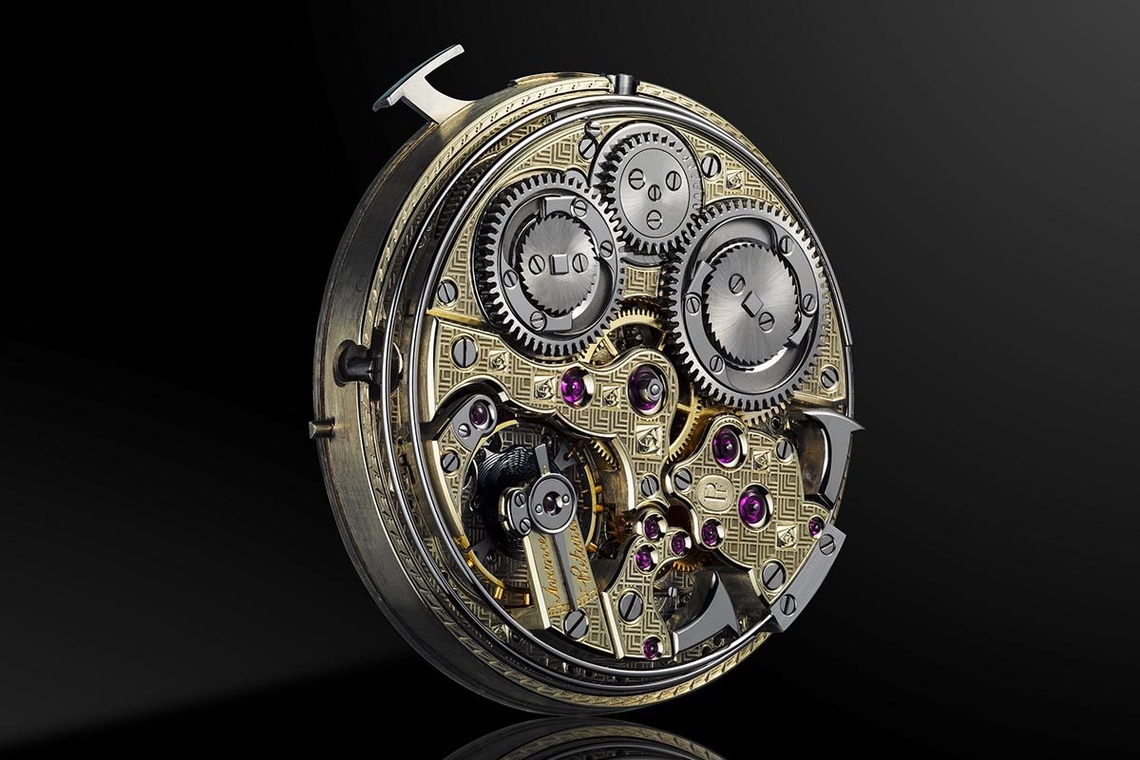 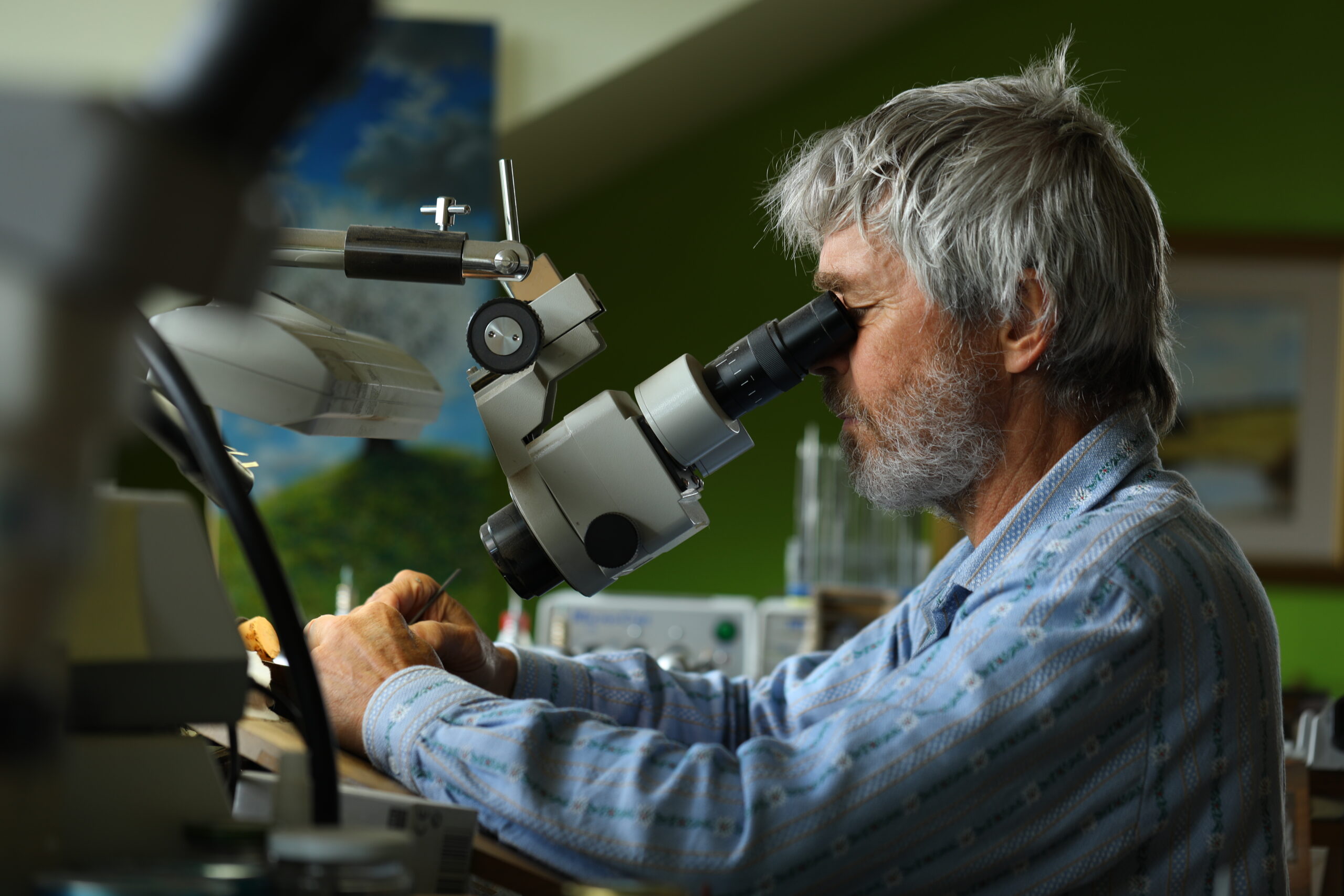 The 64mm white-gold case, created in-house by sister company Les Artisans Boîtier, is a “double hunter”, which means that it has thin hinged lids on both the front and back. The engraving on the case, which echoes the “Rose Carrée” motif, was done by the skilled hands of Eddy Jaquet, a well-respected independent artisan who has also worked with other independents such as Kari Voutilainen and MB&F.

The massive white-gold case is coated in translucent grand feu enamel, which displays complex and varied shades of blue that react beautifully to the light. According to Michel Parmigiani, roses are often regarded as the most coveted and elegant flower, while the blue color symbolizes mystery and attaining the impossible. The blue is also meant to express the color of a body of water as one would see it from the sky. The nuances and subtle changes in shades of blue emulate different depths and the dynamic nature of water. 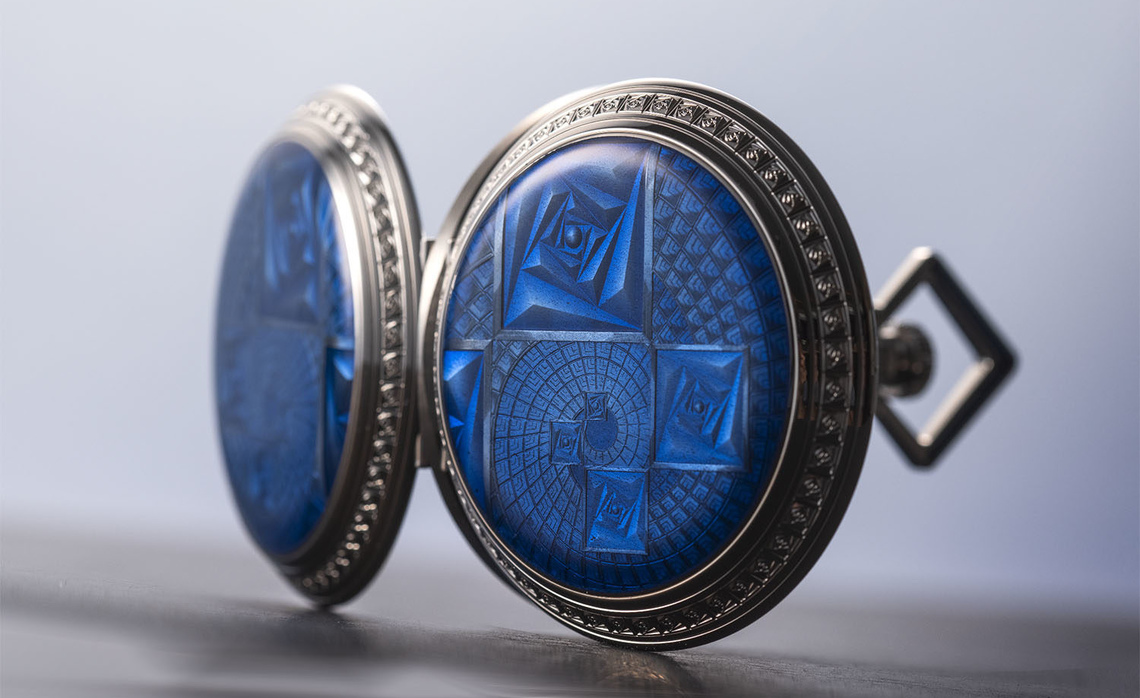 The blue enameling, done by artisan Vanessa Lecci, features a dynamic and interesting rendition of the Rose Carrée motif. It’s worth noting that Grand Feu enameling is an art form in and of itself. Getting the desired result is a process that consists of several steps and a great deal of painstaking of trial and error. Lecci’s process begins with grinding pieces of colored enamel into a very fine powder. The powder is then mixed with oil and water, which forms a paste that is very carefully painted onto the case. The case is then put into an oven in order to harden the layer, forming a glossy, translucent surface. This process is done multiple times until the desired result is achieved. Moreover, Lecci must ensure that the enameling perfectly matches on both covers, no small achievement. 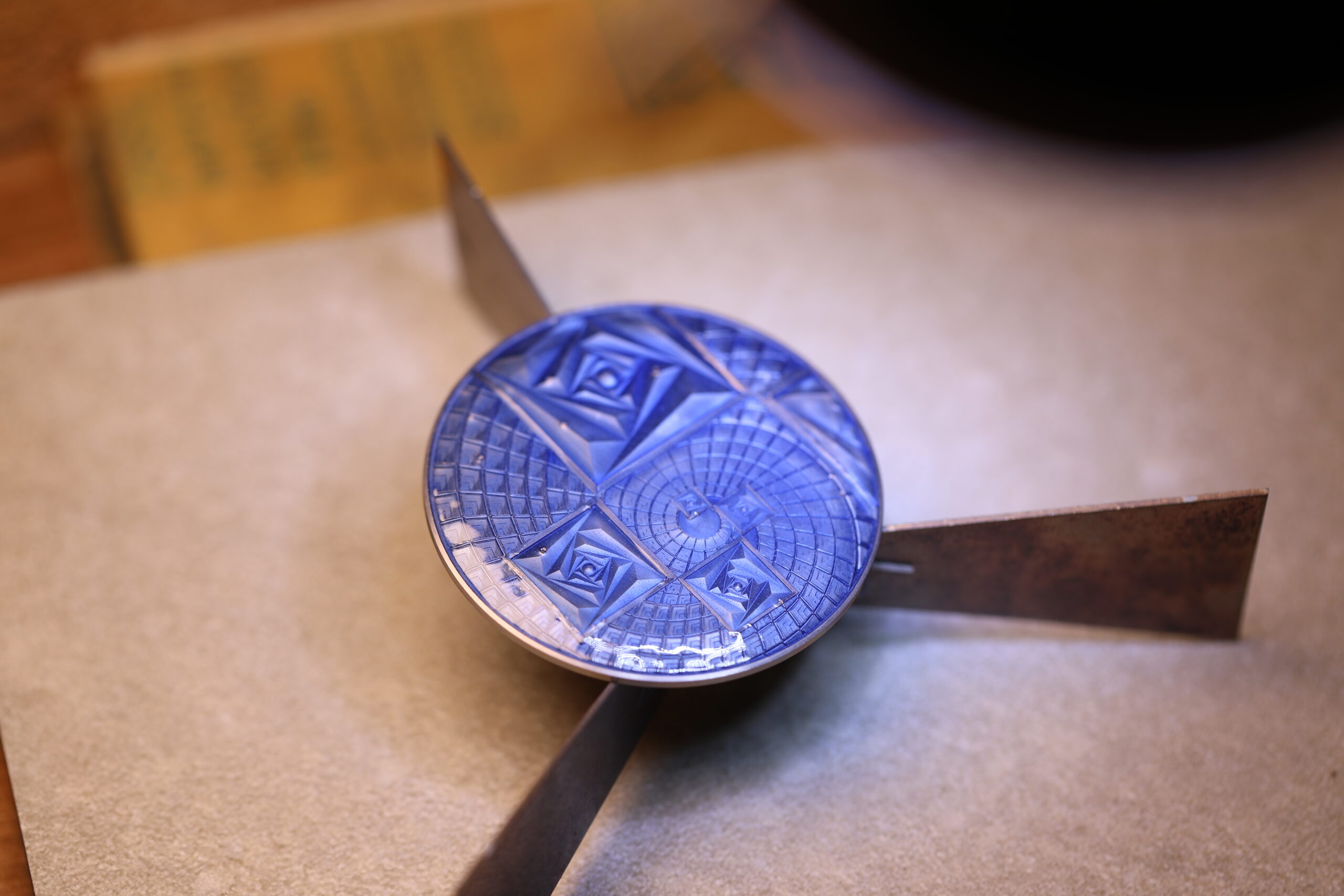 The dial of La Rose Carrée is comprised of a single piece of mirror-like black onyx, which is not only beautiful but also notoriously difficult to cut. It’s gorgeous in its simplicity and serves to balance out the overall aesthetic quite well. The hands are delicately fashioned out of white gold, and the small seconds subdial is surrounded by a thin strip of white gold.

Even the chain of La Rose Carrée was artfully created with impressive attention to detail. Produced by renowned chain maker Laurent Jolliet, the white-gold chain features square links that have been individually faceted and polished by one artisan. Featuring more than 600 sculpted corners, the chain has a gentle taper, with each link sculpted to be slightly smaller than the last. Mirroring the geometric theme of the rest of the watch, the chain effortlessly fits in with the rest of the design. 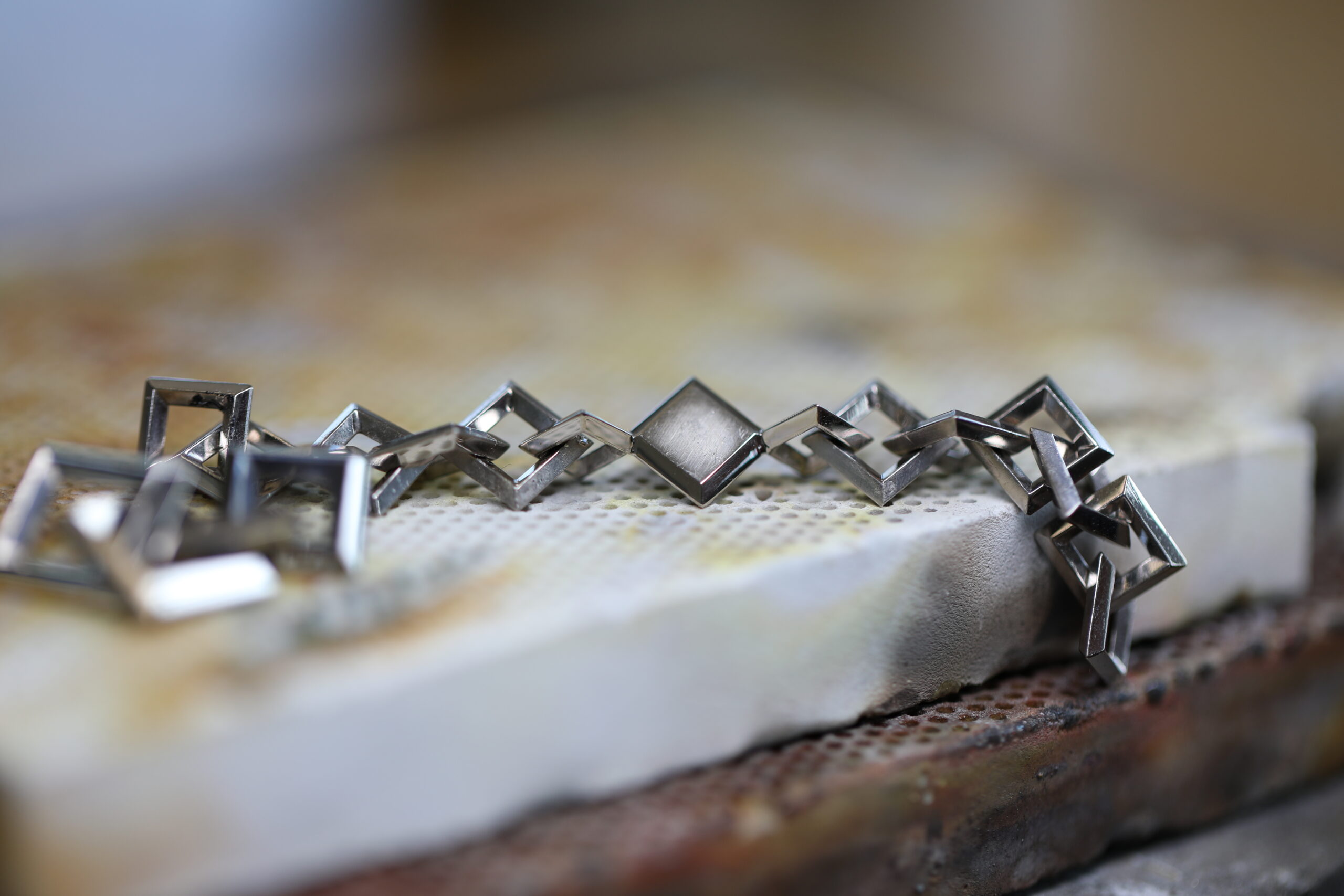 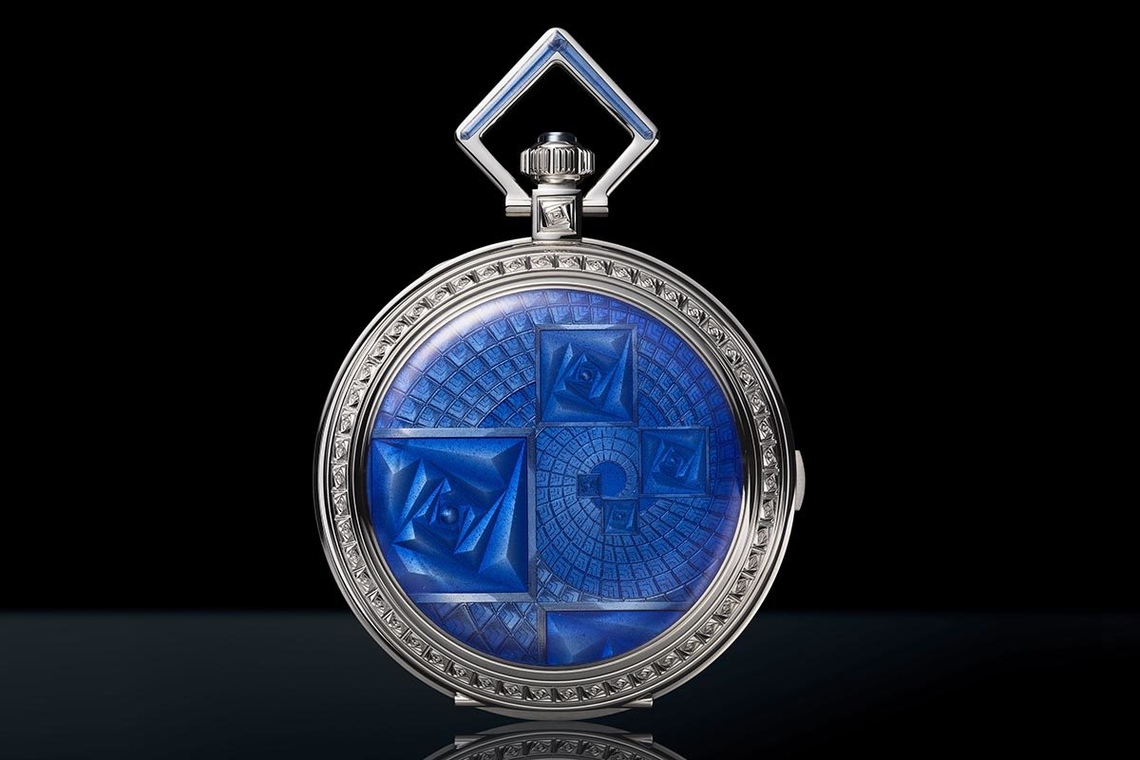 Though separated in time by more than a century, Louis-Elisée Piguet and Parmigiani Fleurier have come together to create a truly magnificent and unique timepiece with the La Rose Carrée. The case, covers, movement, dial, and chain of the Rose Carrée come together with beautiful harmony, leaving absolutely no detail unconsidered. Its creation is a testament to Michel Parmigiani’s passion and genius, as well as a display of the skill and dedication of the independent artisans at Parmigiani Fleurier’s Restoration Workshop. As the art of restoration is the soul of Parmigiani, La Rose Carrée is a fitting way to celebrate the brand’s 25th Anniversary. Learn more at parmigiani.com.