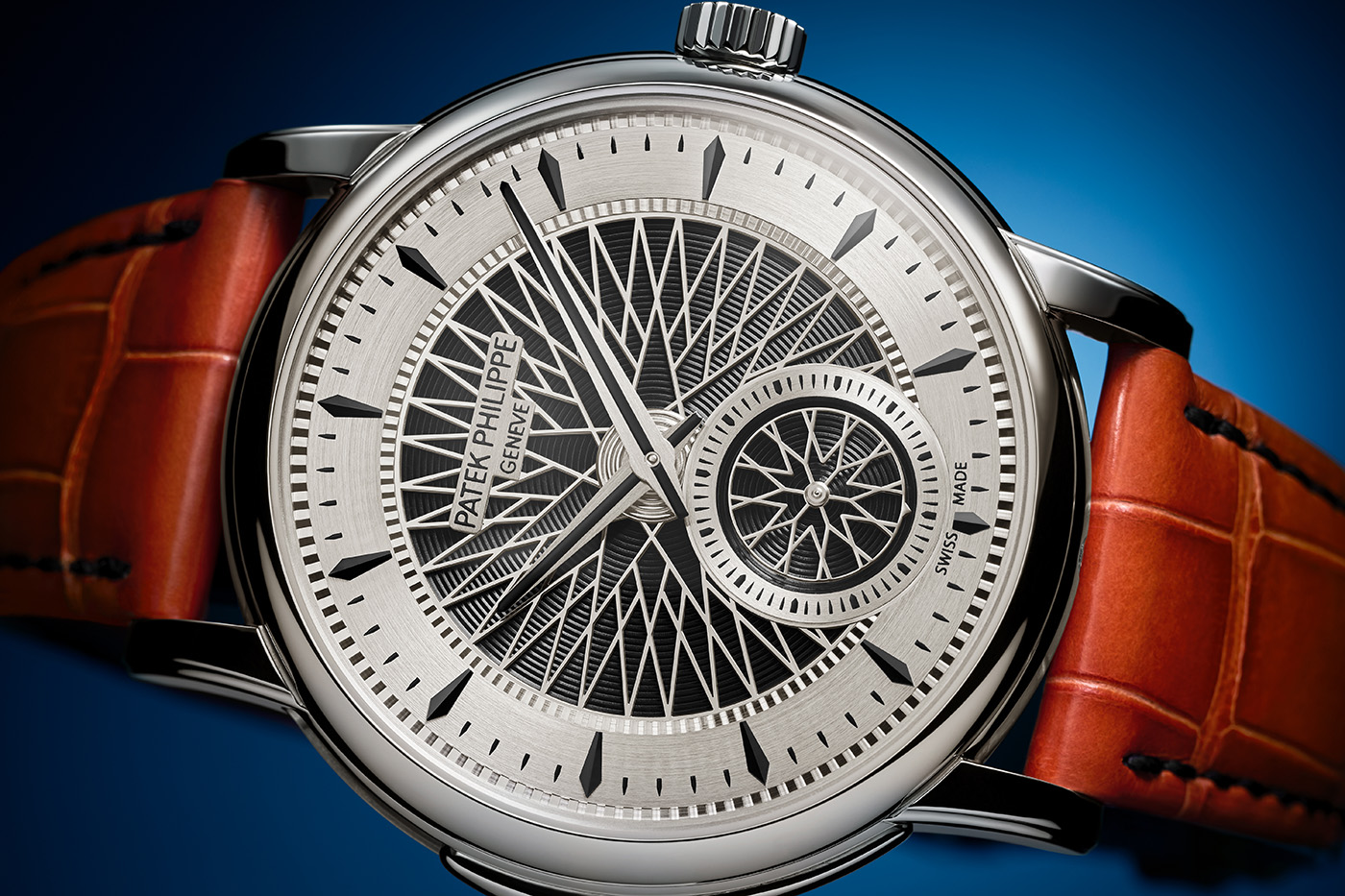 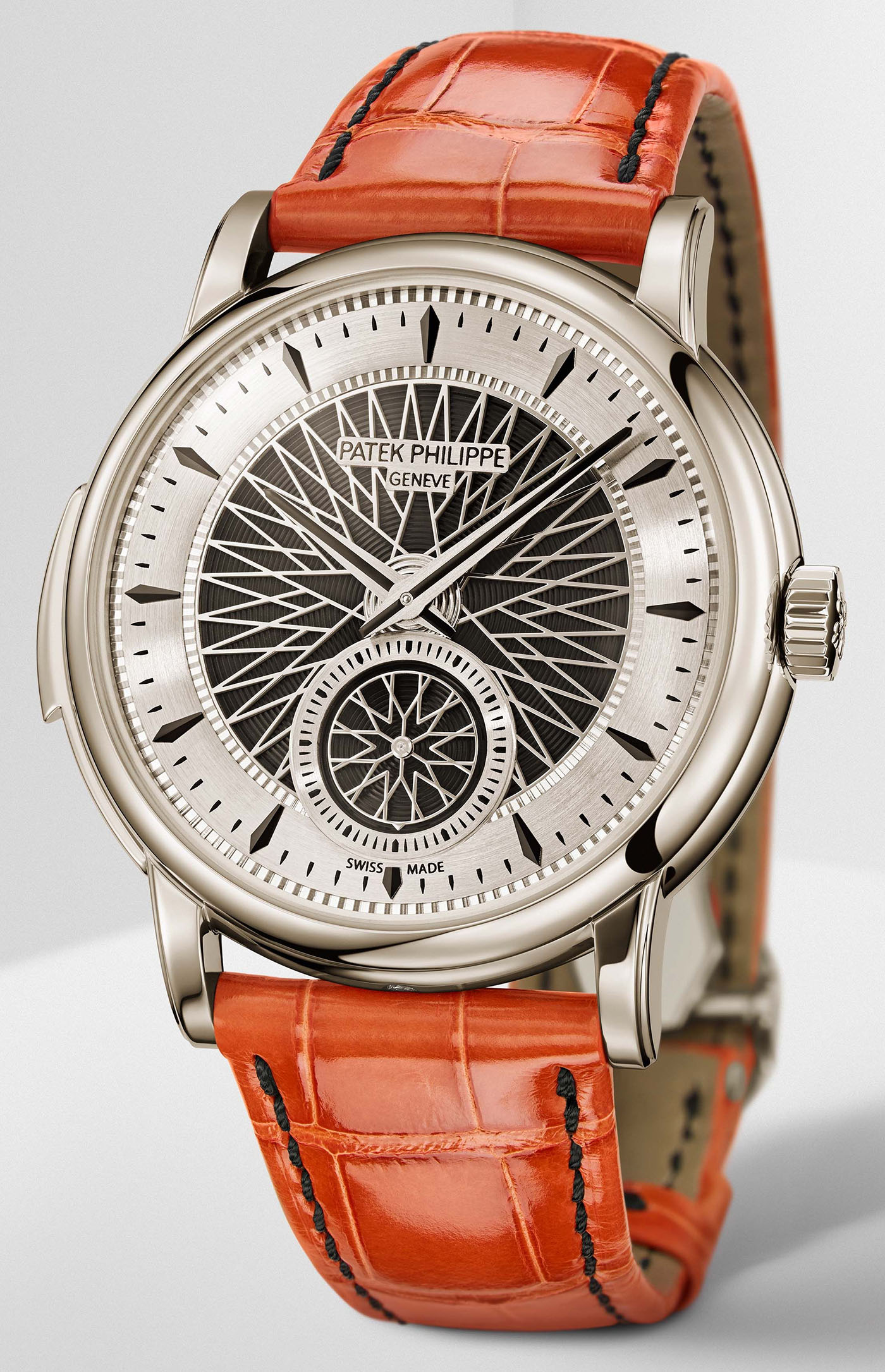 A few hours ago I tuned in to a special “Advanced Research” presentation by Patek Philippe that I must admit made me rather nostalgic. I recall years ago at Baselworld when you’d have to specially-ask the Patek Philippe booth attends for a press kit on the first day of the show (to get it early), and then you’d proceed to review 20-page plus (yes in some instances) printed press kits about new Patek Philippe watches. It was often an exercise in reviewing sometimes loosely relevant information for what really mattered to consumers. Patek Philippe’s style in writing the releases was to maximize sounding technical and important while also sounding as though they are only talking to an elite group of people who follow each of their new releases in succession (a small but dedicated group of folks). In other words, Patek Philippe’s product presentations tend to be thick with substances, but also short on context. But there was also a reward in there. If you could meander through the technical jargon and sift through the details, you could actually come up with what is actually new about the product along with a lot of context about how the brand actually thinks about their own product. I always appreciated Patek Philippe for those little brain teasers – too many watch brands make understanding their new products all too dull. Now let’s talk about the latest Patek Philippe watch you probably won’t get a chance to own (let alone wear), the limited edition of 15 pieces Advanced Research reference 5750 “Fortissimo” (5750P/001)

The Patek Philippe Advanced Research 5750 is a new automatic minute repeater watch whose aim is to present a new, louder form of minute repeater chiming mechanism. Indeed, Patek Philippe (and its colleagues) often like to experiment with new and interesting ways to manufacture and assemble one of the world’s least practical mechanical watch complications – a on-demand system that sounds out the time using a series of chimes produced by small hammers hitting gongs. Patek Philippe is a master at the minute repeaters and it is true that among extremely elite collectors there is great appreciation for musical chiming watches. There is also a strong analogy to wine appreciation in that appreciating a good minute repeater requires experience with a lot of them, and then developing a taste for the small nuances the separate the merely good from the truly great. While many of us would like a department as progressive-sounding as “Advanced Research” to be working on a few more accessible concepts at Patek Philippe, the team there is hard at work making the firm’s top clients happy and enthused. 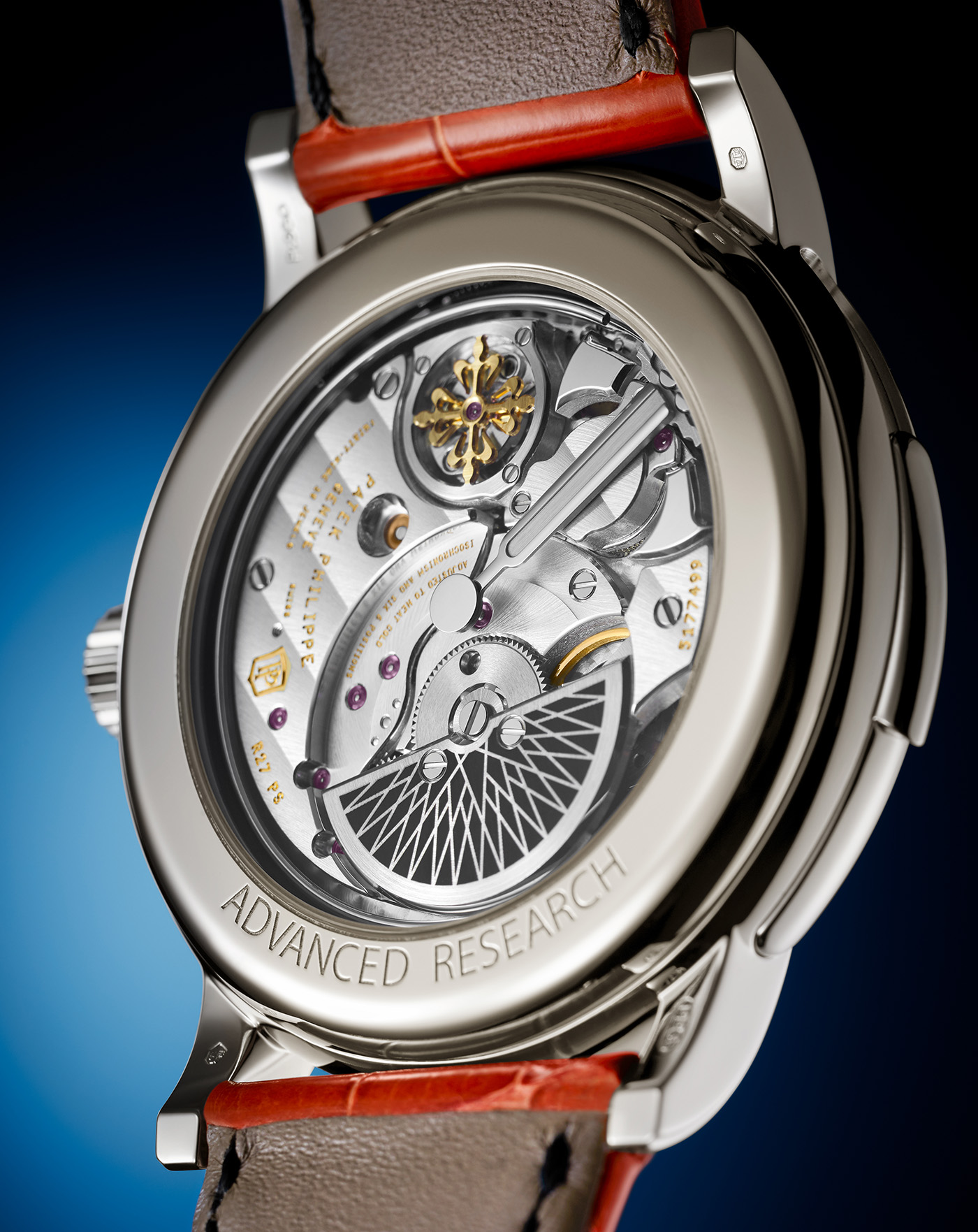 For instance, you’d never think that in the presentation Mr. Stern would reference why his father (who ran Patek Philippe before him and who is still a domineering presence at the brand) would have never approved such a watch. Why? Because Mr. Stern senior would find the design too wild and because he would never allow a whimsical as opposed to functional seconds hand on the dial. That’s extremely revealing information about the company, but is also endearingly honest and charming. It probably doesn’t prevent him from convincing the brand’s major supporters that this is a cool watch worth thinking about getting. That’s important because the Advanced Research 5750 watch isn’t cheap at a price well over half a million dollars for each piece. 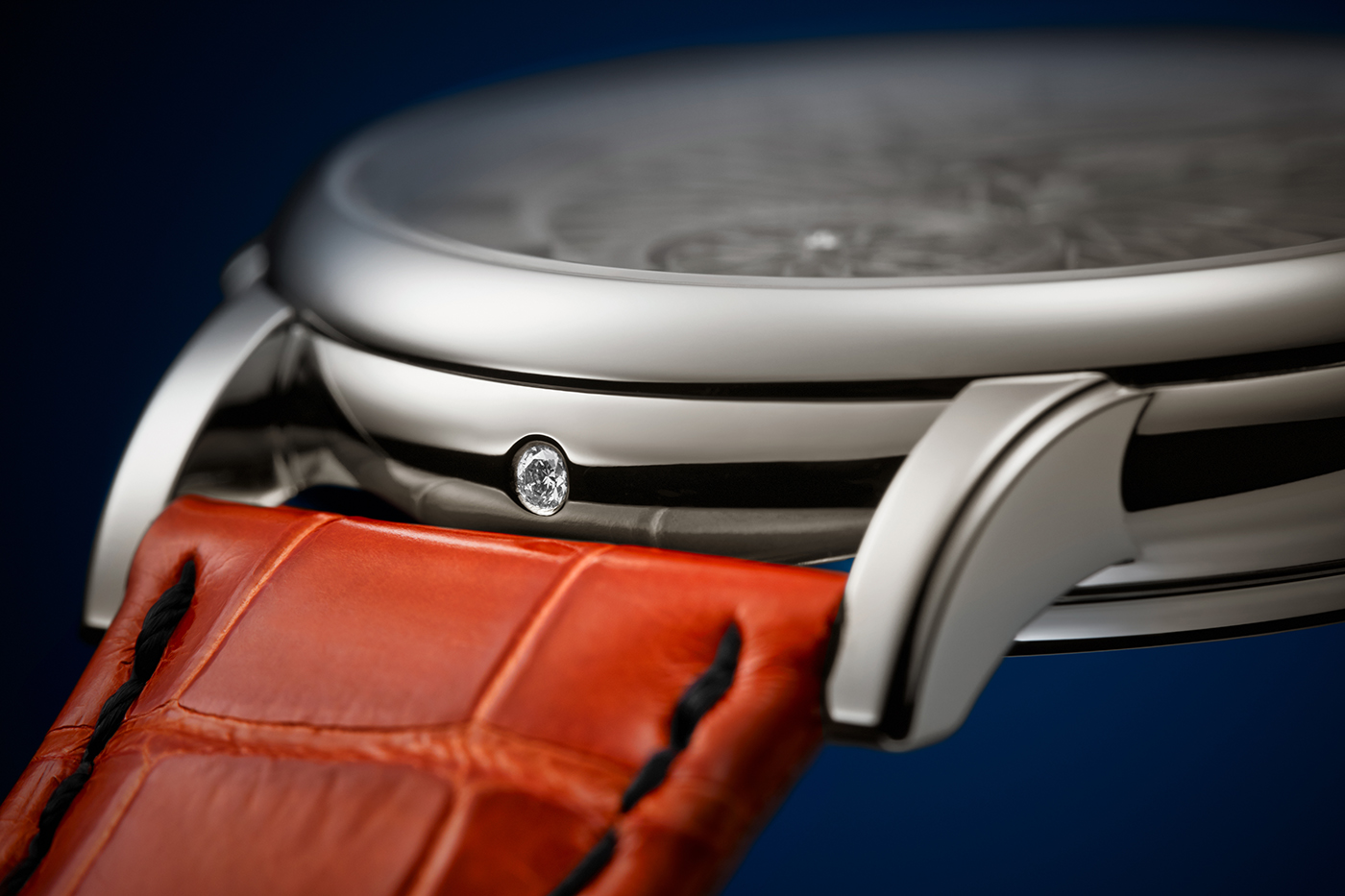 According to Mr. Stern, the design of the 40mm wide platinum-cased watch dial is inspired by iconic automobile wheels from the 1960s. Indeed, the spoke-like pattern for the dial, subsidiary seconds disc, and even automatic 3/4 micro-rotor motif are all a nod to the cross-over between enjoying classic watches and classic cars. Indeed legibility suffers, and indeed Senior Stern would have never allowed it. But Thierry is correct that the design is attractive. He does have good taste, and apparently checks all minute repeater watches for their sound quality himself. So each 5750 watch that is sent out to clients will need to be personally OKed by him.

I for one agree that Patek Philippe needs to be more artistic and playful with their watches and dials. They have the history for it, and they do all the “rare crafts” very well. Why do they need to be trapped in history when the firm was innovative with design in the 1920s and experimented with new things. Why not also in the 2020s such a scant 100 years later? I’m not sure if I could stare at the dial of the Patek Philippe 5750 all day long myself, but it does represent a very interesting take on automobile wheels meet guilloche engravings at the Art Deco dance meet. 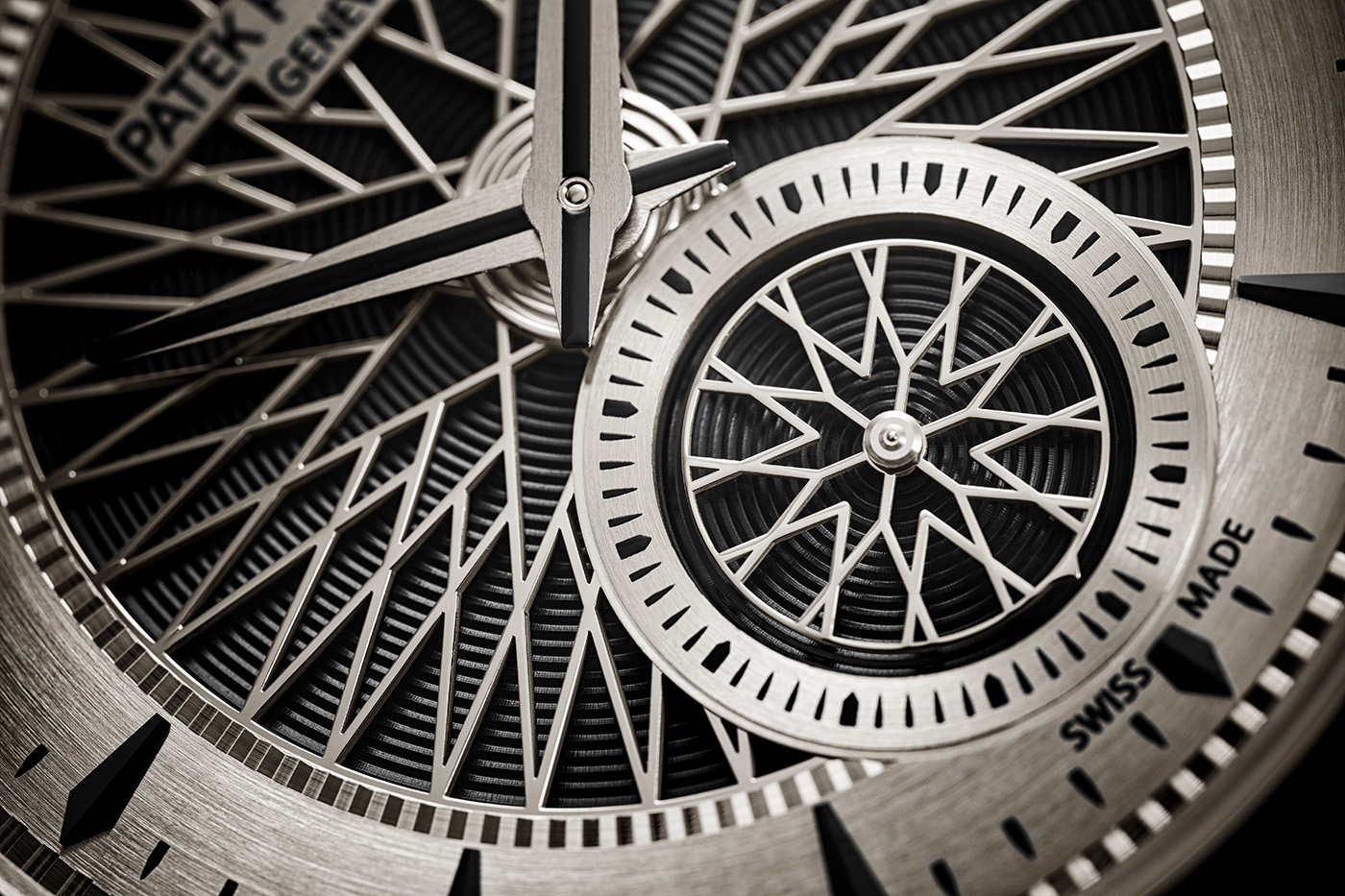 The 5750 watch case is 40mm wide and 11.1mm thick (pretty slim for an automatic minute repeater with a fancy amplification system) in 950 platinum. Platinum as a case material was chosen for shock value alone. Minute repeaters and platinum cases don’t mix well (even though there have been platinum minute repeater watches in the past) because of how the soft platinum metal absorbs sound vibrations and thus dulls resonance. So Patek Philippe chose platinum not because it works well for this purpose, but rather because “they said it shouldn’t be done… and we showed you it can.”

Good thing for Patek Philippe their minute repeater sound amplification system does not use the case itself as a resonance chamber and thus it isn’t very relevant for the audio volume of the chimes. That’s sort of the point of the “fortissimo” system which separates the minute repeater mechanism from the case altogether and includes a small amplifier that Patek Philippe invented. You can probably find the video I mentioned above if you want a more thorough technical explanation for how the system works. It’s rather clever and it approaches the task of building a tiny reverberating amplifier in a wrist watch in a new way. It leverages the hardness of sapphire crystal as well as a case design which allows sound to pass through it. 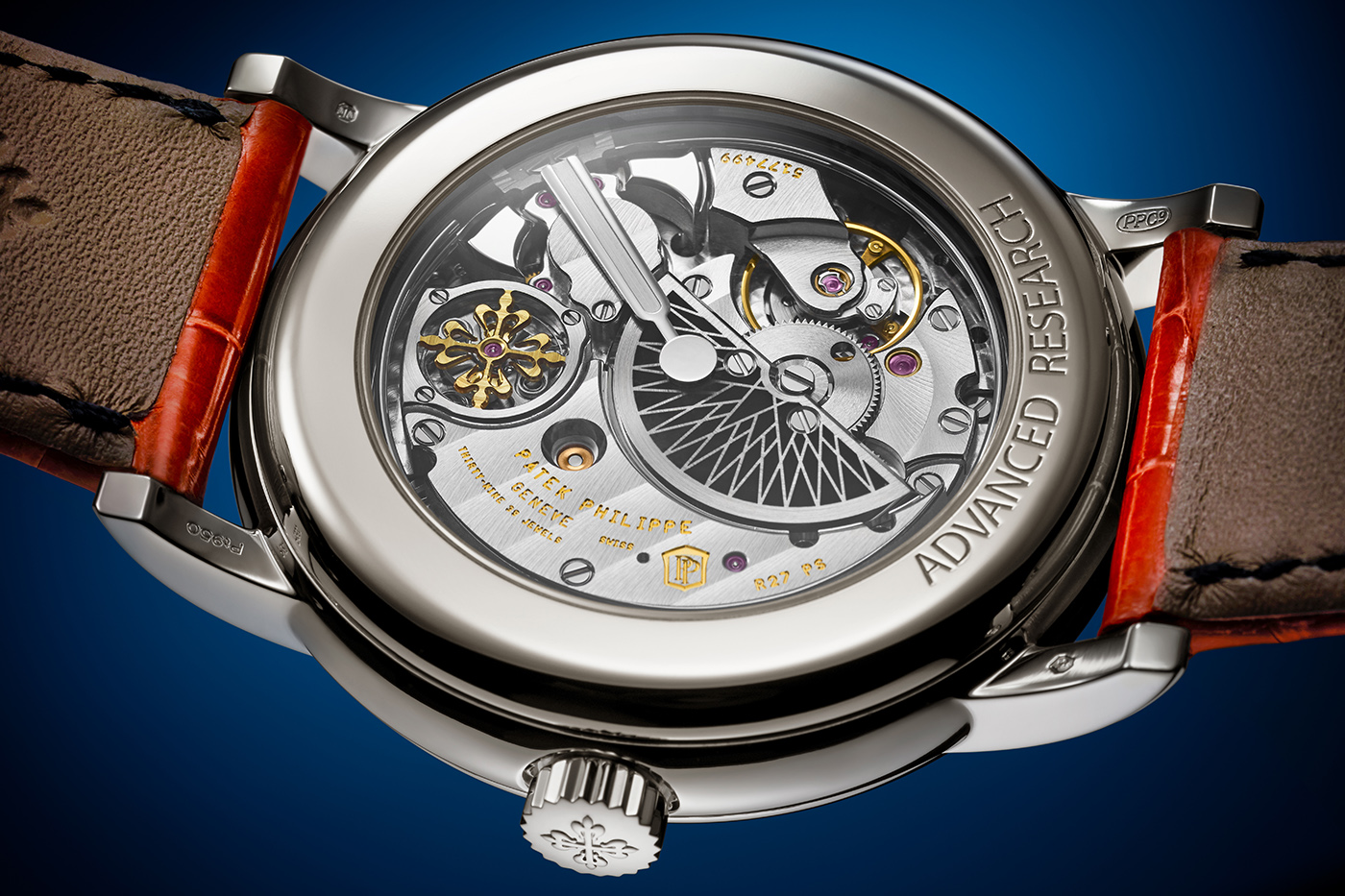 Where Patek Philippe can be more highly admired In my opinion is in the novel system that creates the chimes as well as the detail and care Patek Philippe took in making sure the minute repeater sounds attractive. That’s what I look forward to most – simply hearing the 5750 in operation. I don’t need to own it, but I really want to hear it. Getting the right sound from a system of hammers and gongs is one of the most studied arts in watchmaking probably because there have been so many designs for how to do it. Here Patek Philippe uses a polymer ring to “separate” the movement from the main case, which is an important part in allowing the sound to reverberate as much as possible. The gongs are connected to a system which transmits their sound to an amplification device that is a circular wafer of sapphire crystal mounted on a steel rod. A neat detail is that Patek Philippe replaced the steel hammers for ones made out of platinum. They did this to actually soften while deepening the sound. Alone this wouldn’t make much sense, but a slightly softer sound mixed with an amplification device probably results in a more attractive tone when heard in person. Patek Philippe went even further. They tweaked the movement so that the minute repeater ran a bit more slowly. That way you can better hear each complete chimed note – which plays longer due to the increased duration of resonance. That’s pretty cool and what they like to refer to as “refinement” over near Geneva.

The base movement itself is mostly carried over from Patek Philippe’s long-standing caliber R 27. In the Advanced Research 5750 the movement is known as the caliber R 27 PS. The movement uses all of Patek Philippe’s best silicon technology for some of the regulation system parts, and it operates at 3Hz with about 45 hours of power reserve. The fortissimo system in the movement replaces the legacy minute repeater system with the new system that sits over the movement with the sapphire crystal like an umbrella. The entire movement with the platinum micro-rotor automatic rotor and the fortissimo amplification system is just 6.05mm thick and made from 342 parts.

Between the 21mm wide spaced lugs on the bottom of the case you’ll see a set diamond. This is a hallmark feature that Patek Philippe puts in some of its more limited or elite watch creations. Attached to the platinum case is a “shiny orange”-colored alligator strap (which even I admit is a bit gratuitous). Patek Philippe is decidedly going for showy, in a watch which is really all about “hear me,” so the bold styling makes sense. It is also wise for Patek Philippe to be as “controversial with the dial as they are,” as it will probably only help to increase passion from those who love the look of the Advanced Research ref. 5750 (5750P / 001). Price for each of the 15 limited edition pieces is 590,000 CHF. Learn more at the Patek Philippe website here.