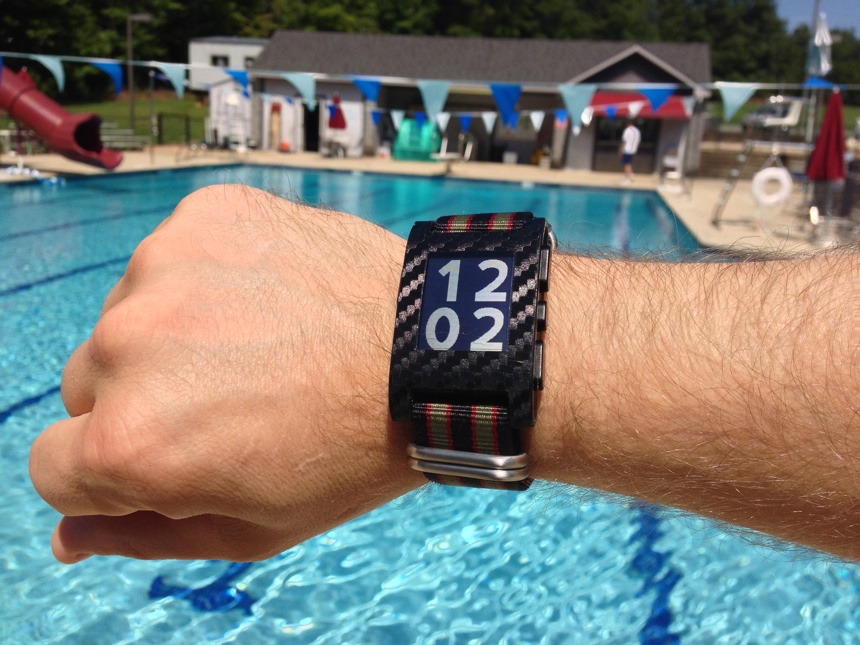 Making Pebble more interesting is not just about adding a new face.
Third party companies are slowly adding support for the watch. Runkeeper recognizes when Pebble is paired with a phone and the watch face changes to use the center right pusher to start and stop logging a run in the app on the phone. Pebble have partnered with FreeCaddie to create a rangefinder for a large number of golf courses. 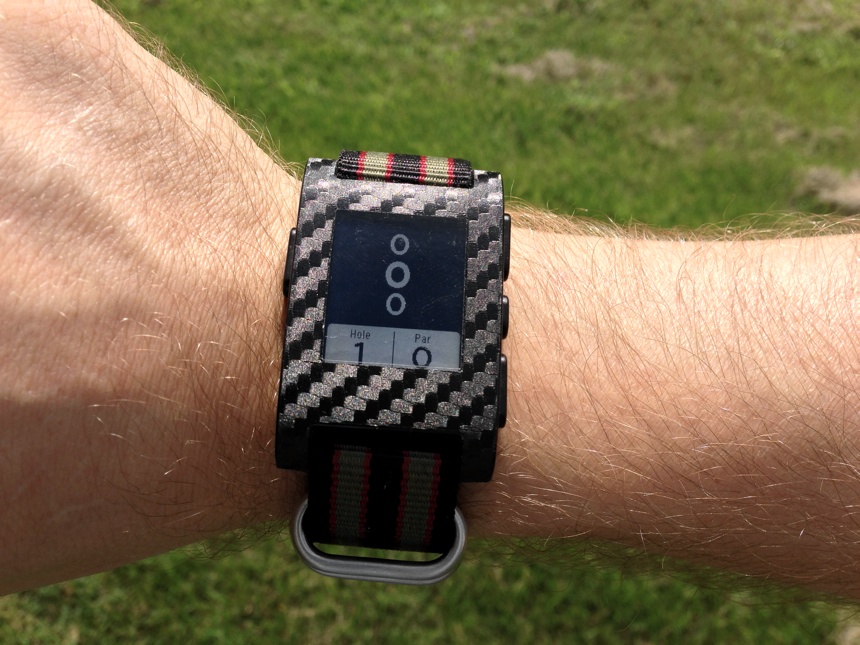 FreeCaddie works with Pebble to show hole and par.

The phone and watch work together, giving you a display of distances to the front, center and back of the green, as well as the par for the current hole you’re playing. These sorts of partnerships are important to making the Pebble watch more than a music remote that can change faces. There are individual efforts to extend function, like the httPebble project that put weather on the watch, or people who are working on making the watch control their Nest thermostat or Hue lighting. These are great efforts, but are still a little early when it comes to recommending them to non-technical users.

The packaging is simple. It ships in its box, with no outer protective box required. The box is plain, black print on corrugated cardboard, emblazoned with the words, “it’s time.” Inside, the watch and cable are laid out nicely. 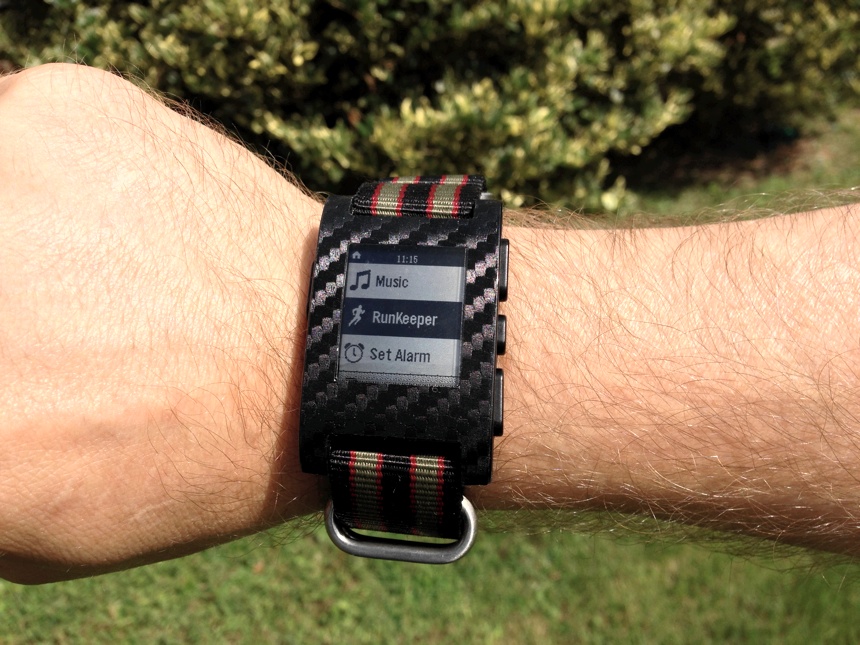 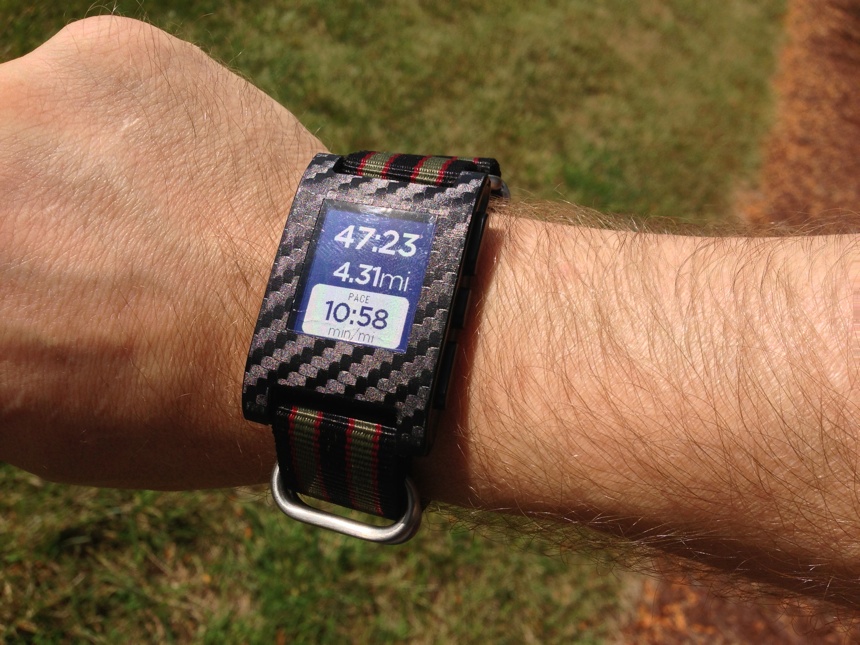 I went to put the Pebble watch on after a week’s worth of use and found that its battery had run out. This is certainly a long enough time period to get from it, but I didn’t really know when it was nearly flat, and had to have the charging cable with me to charge at my desk at work. Pebble did show a battery icon, but only when it was nearly empty and the icon didn’t appear to represent how full or empty the battery charge level actually was. When I took it off to charge, I put on a more traditional analog three-hand watch. I did look at my wrist when I heard my phone ring in my pocket. Pebble vibrates when a notification or call comes in, but I had already begun to form a habit of looking at my wrist, vibration or not.

Pebble accomplishes such long battery life two ways. It uses Bluetooth 4.0, also known as Bluetooth Low Energy (BLE), or Bluetooth Smart. All of these are the same thing, with different names. Blame the Bluetooth special interest group for contributing to the confusion. It also uses a low power screen made by Sharp called e-paper. The screen is a backlit, low-resolution 144×168 pixel display. A sharp flick of the wrist or tapping on the screen triggers the 3D accelerometer inside and turns on the backlight.

The Pebble watch requires the app on a phone to push the time and new faces to the watch. This is pretty straightforward. One view of the app shows email settings so that email is pushed to the watch. Another shows troubleshooting information, links to help, and test notifications to prove the watch and phone are paired correctly, with advice on what to do when they are not. The third view manages the faces installed on the watch and has links to get more faces. For faces not linked in the app, either user created ones or ones found on mypebblefaces.com, I found emailing them to myself and then opening the attached .PBW file in the Pebble app caused the face to be installed. Opening a .PBW link in the browser on the phone also causes the Pebble app to install the watch face. 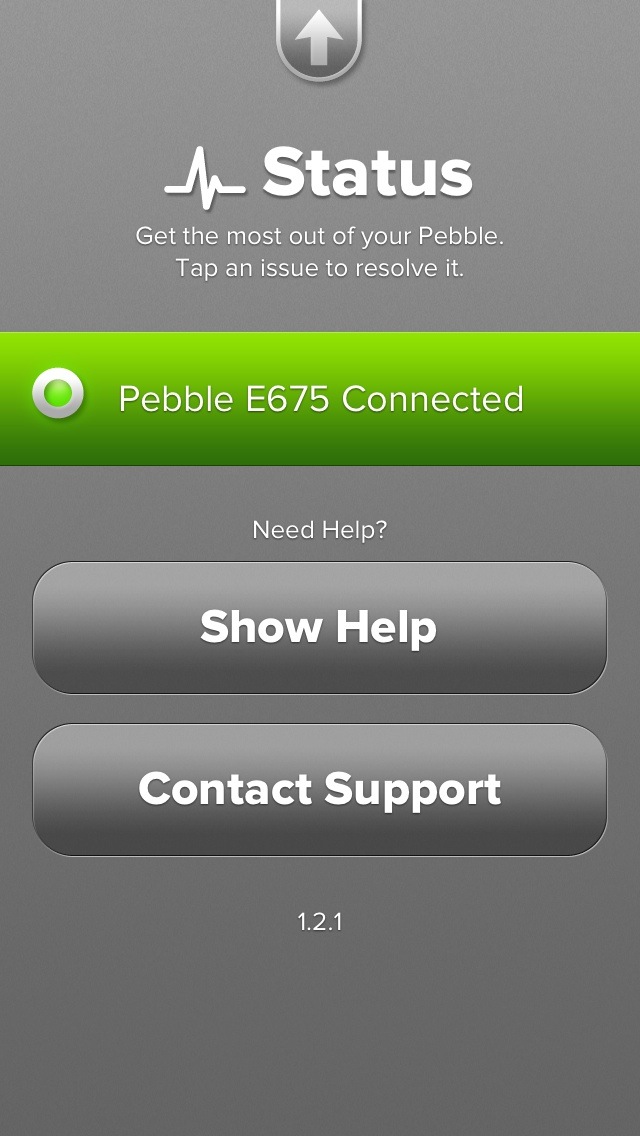 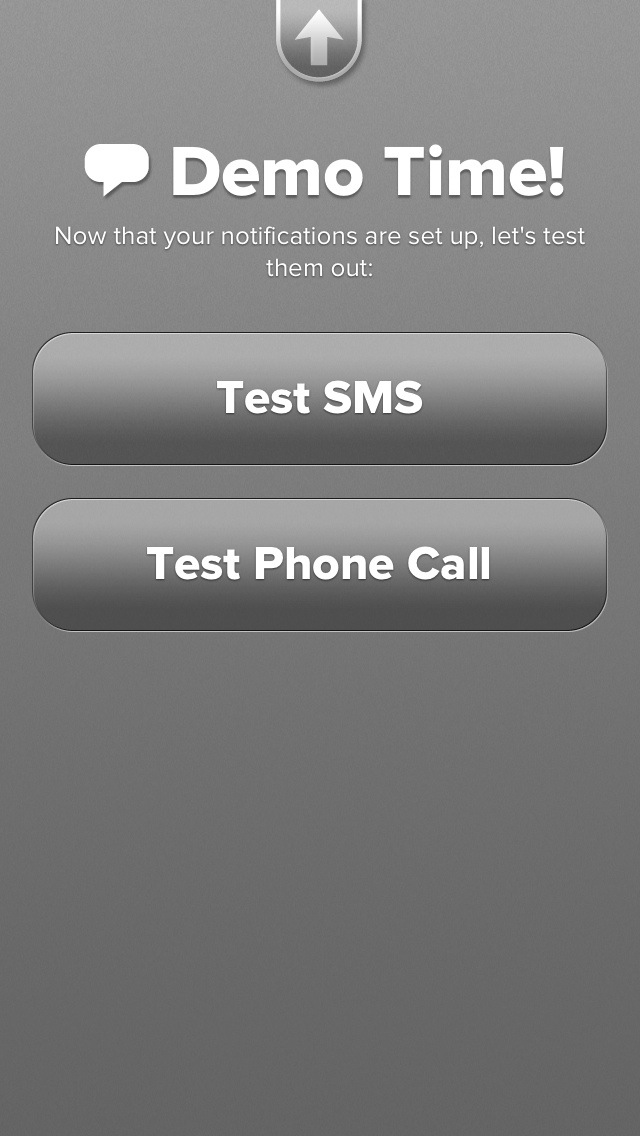 …testing of the notifications functions 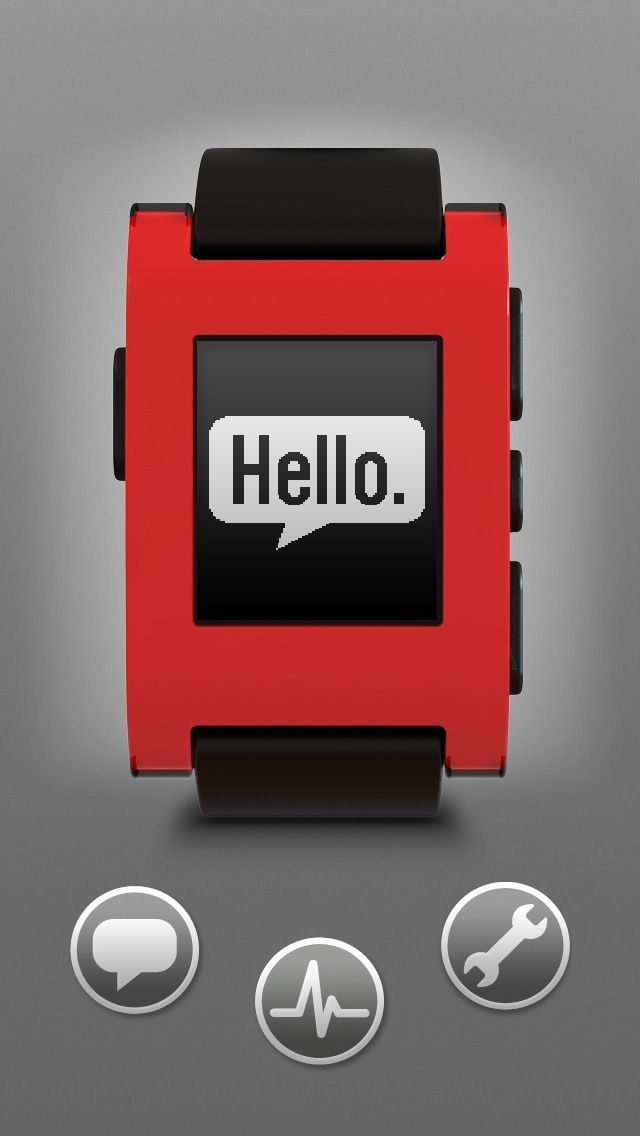 The Pebble home screen has icons that glow red when they need attention. 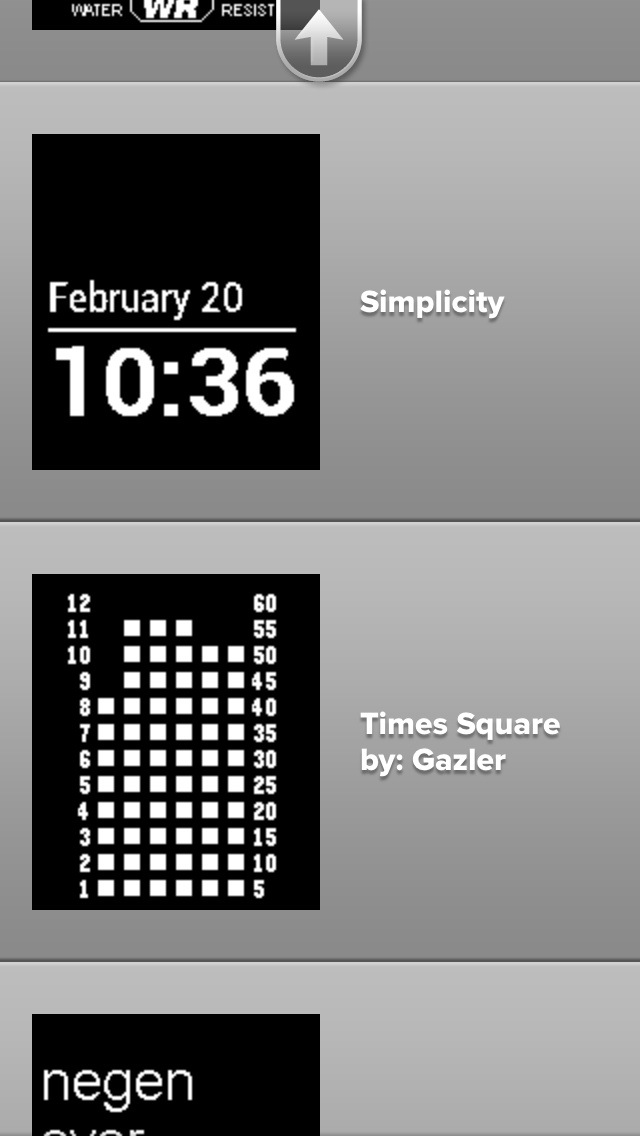 Pebble provides a list of faces for installation to the watch 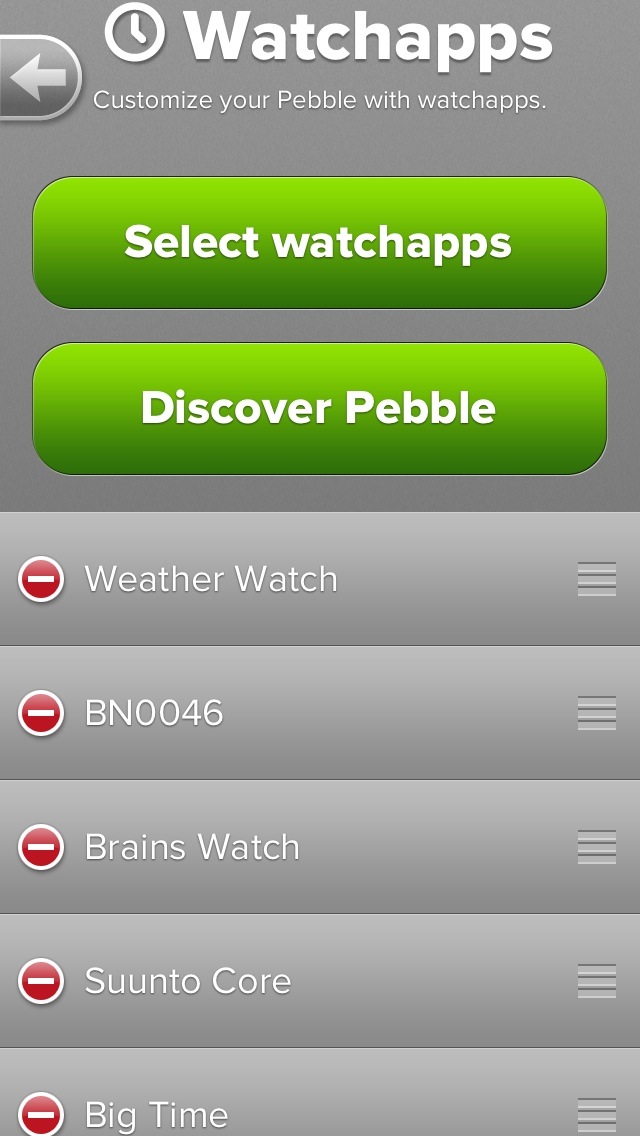 Managing the watch face order and deleting them are easy. 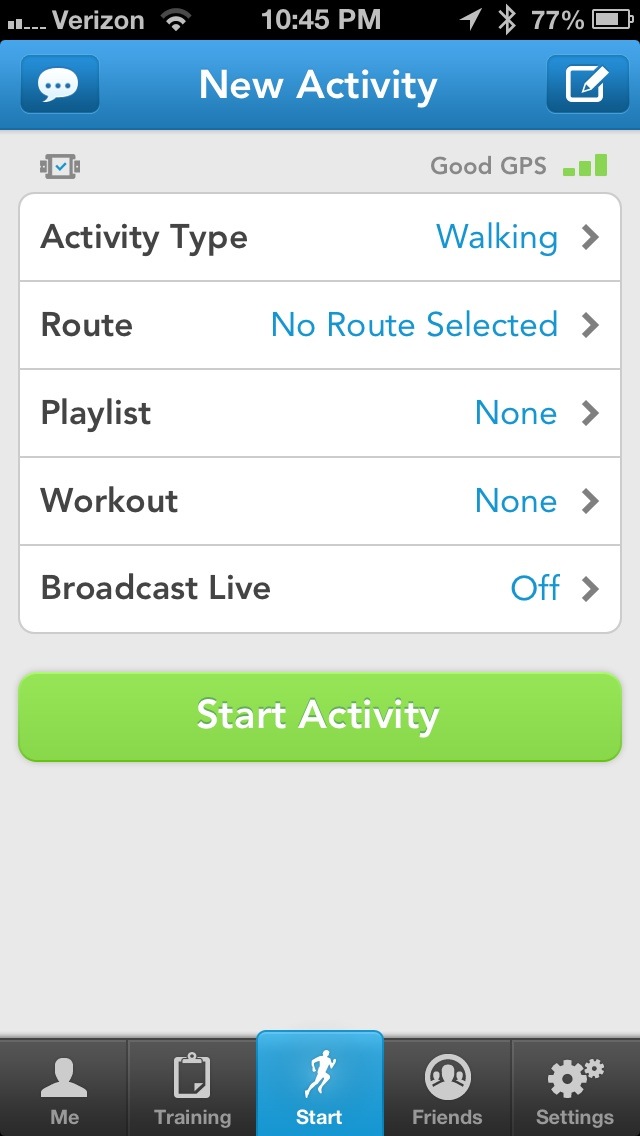 What happens when you’re wearing it and it’s out of range of the phone?

It becomes a watch. It can’t control music, get text message or email notifications, weather, or answer or dismiss phone calls. As a watch, it’s clearly a watch made by a technology company first, watch company second. It’s nice to be able to change the faces, but it’s not an amazing watch on its own.

But how does it look? 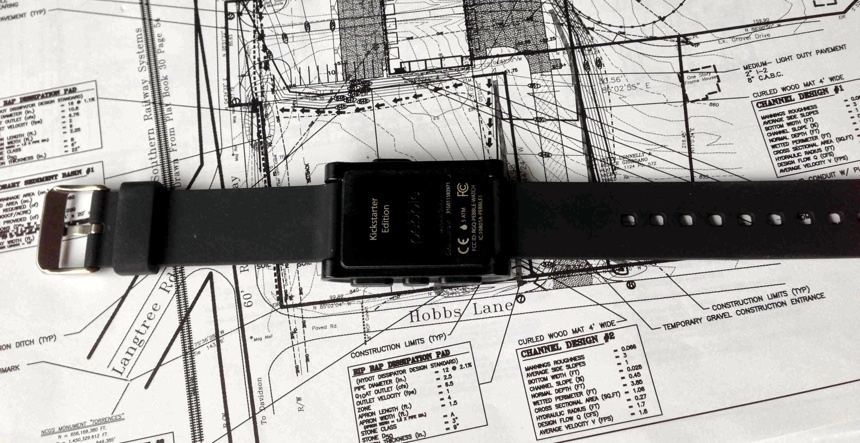 The case back is sealed and emblazoned with the Kickstarter Edition text.

Pebble has 22mm lugs and uses jumbo spring bars. It comes with a rubber watch band. Pebble claims the plastic crystal is scratch proof, but there are a number of companies providing screen protectors in the form of clear scratch-resistant, self-healing film, similar to screen protectors for smartphones. Just as there’s a market for screen protectors and cases to dress up smartphones, I’ve placed a screen protector on mine for daily use. This doesn’t impair viewing at all and will protect it from any potential scratches.

I’ve placed it on a number of NATO or ZULU straps and for my taste, it improves the look. My wife stated in no uncertain terms that she likes the ZULU strap better than the watch itself. It comes down to taste and what you think fits with your attire. 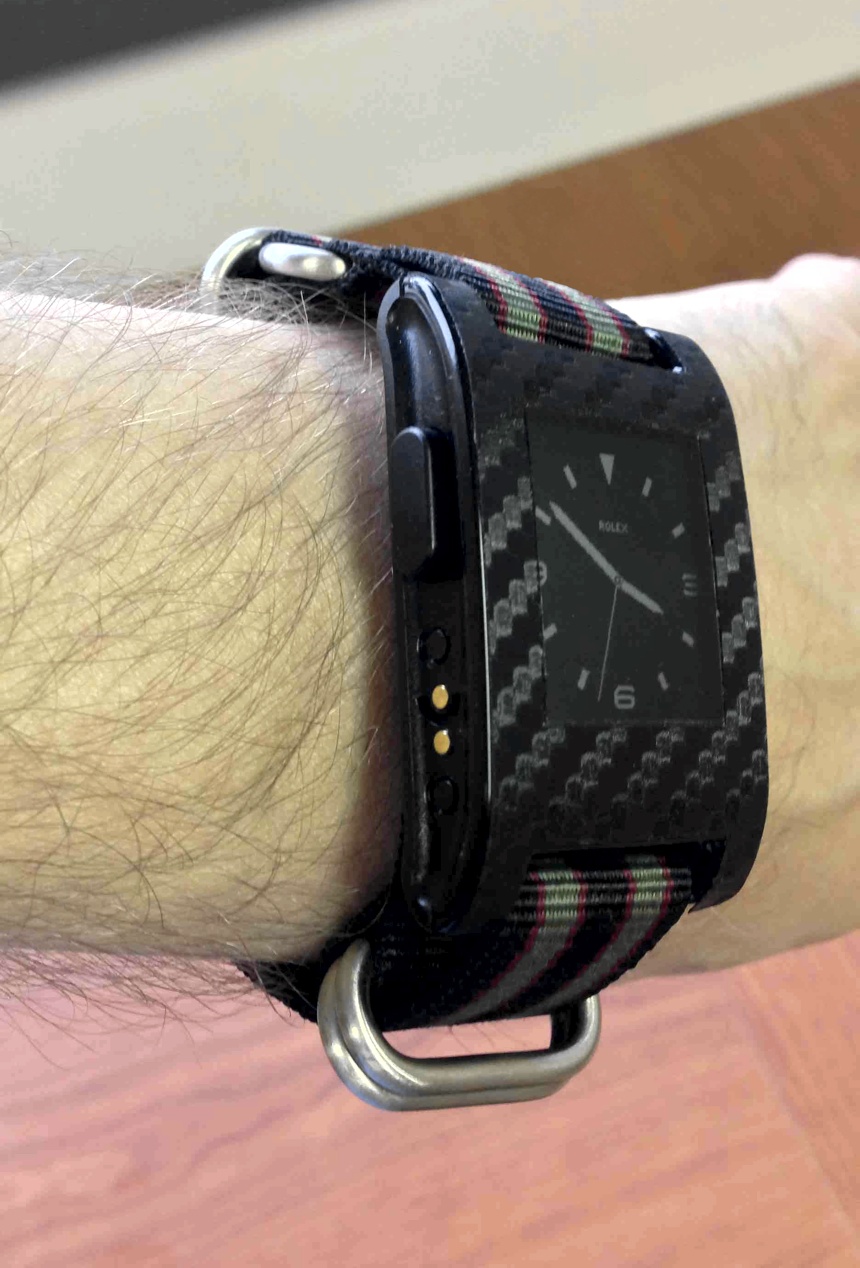 Pebble when viewed from the side.

Pebble feels comfortable on the wrist and wears slightly large due to the length and thickness of the case. The top case is sealed to the bottom case with glue, and while the factory did a good job and the watch is water-resistant to 5 ATM, the split of the case halves is part of the design that takes a little getting used to.

At the end of the day, smartwatches today are firmly tool watches. Pebble is squarely in that category with its complications, both useful and easy to use. When notifications work perfectly, and when it’s in range of the paired phone, it’s handy. That’s really the crux of the problem. We’re still figuring out what makes a smartwatch… smart. Unless you’re running, biking or playing golf, Pebble is mostly a terminal and remote control for the smartphone. While Pebble has easy controls, it’s possible we don’t know what a smartwatch should be yet.

Necessary Data
>Brand: Pebble
>Model: 301BL
>Price: $149 USD
>Would reviewer personally wear it: No, but I thought I would. It’s a casual watch, and I do get used to glancing at my wrist for notifications and answering calls. Pebble gets a lot of things right.
>Friend we’d recommend it to first: Early adopter who doesn’t mind the look and wants text and email notifications.
>Worst characteristic of watch: The height of the case, the part line where the case halves join, and the susceptible-to-scratching face.
>Best characteristic of watch: Text and email notifications, good choice of display and fonts, active developer community, magnetic charging cable.