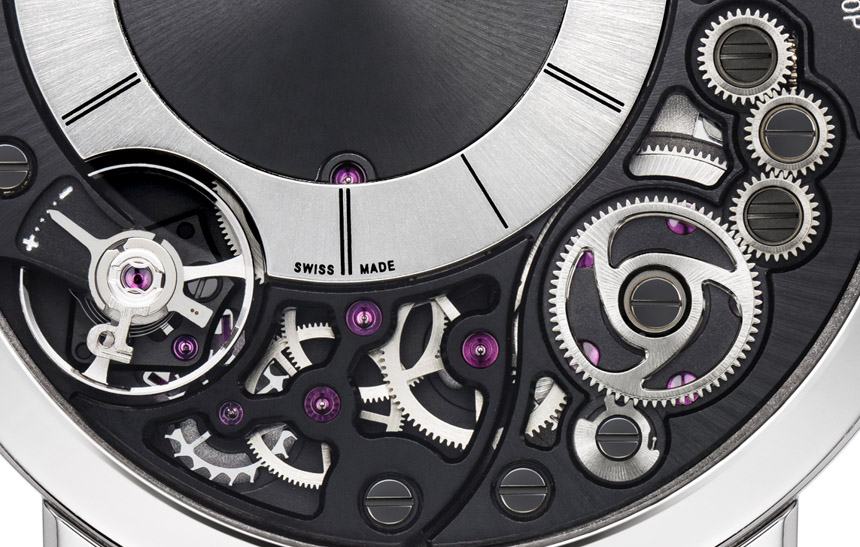 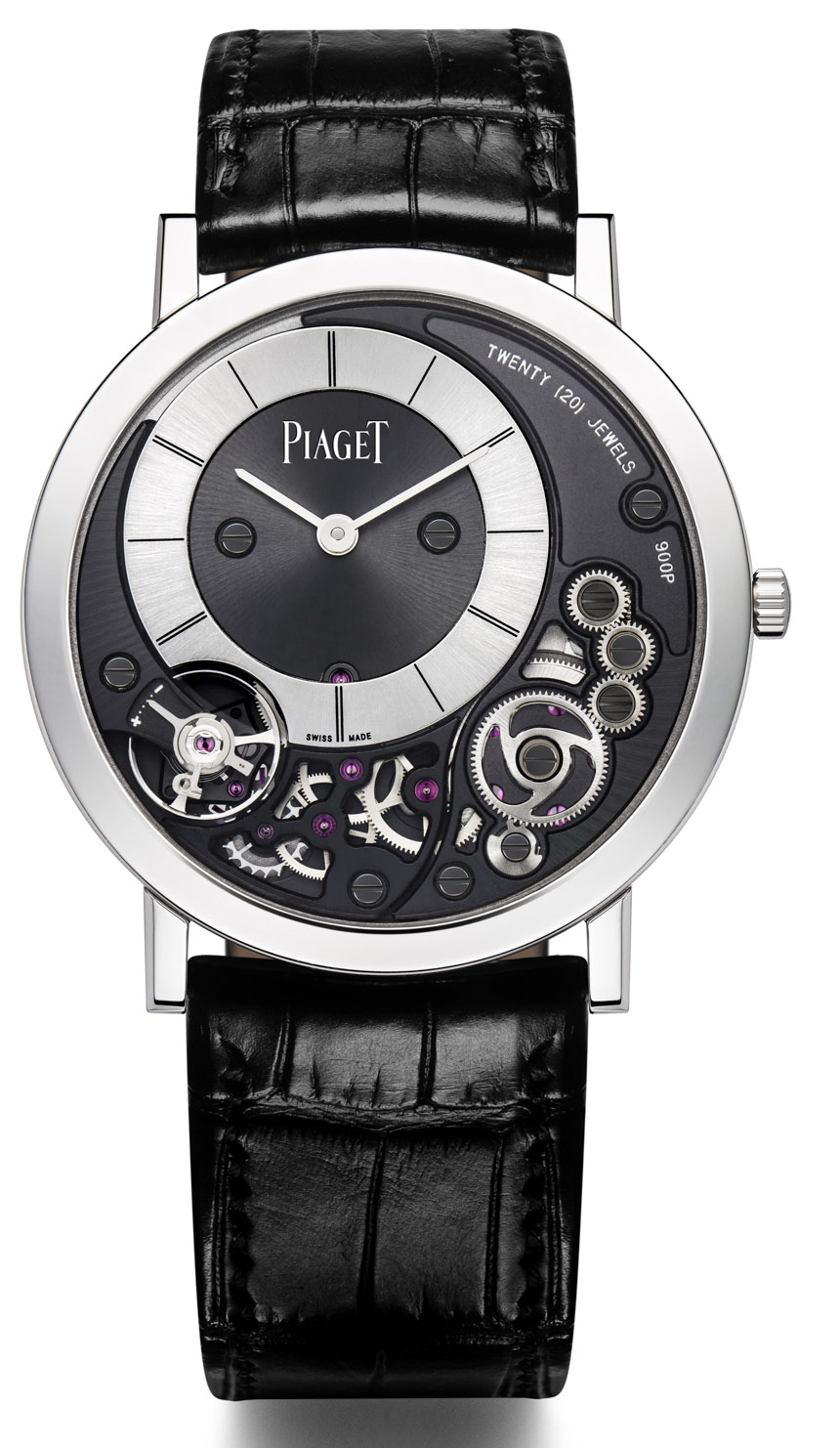 For 2014 Piaget will once again hold and retain the title of “world’s thinnest watch” with the Altiplano 38mm 900P. For years now Piaget has been releasing mechanical watch after mechanical watch exclusively dedicated to the notion of being the thinnest possible of that type. This practice began long ago with lots of success. In 1957 they released the 2mm thick 9P movement and in 1960 they released the famed 12p automatic movement. Sometimes Piaget gets de-throned in a particular “ultra-thin” category by another brand who is able to cut out another fraction of a millimeter from the thickness of a case or movement. This year they take the title of absolute world’s thinnest mechanical watch back with this actually very ultra-thin creation that is just 3.65mm thick, and whose movement is merged with the case.

Over the last few years who has been the most interested in “ultra-thin?” Pretty much everyone. The notion of a very thin mechanical watch has been a haute horology trend as of late. What really amused us is when for marketing purposes a lot of brands simply starting adding “ultra thin” to watches that frankly weren’t any different than the year before. It seems as though someone decided that 10mm or under was “ultra-thin.” Well you could stack close to three Piaget Altiplano 38mm 900P watches next to a 10mm thick watch. The moral of the story is that not all “ultra thins” are created equal. So it is important to note who the major players are. 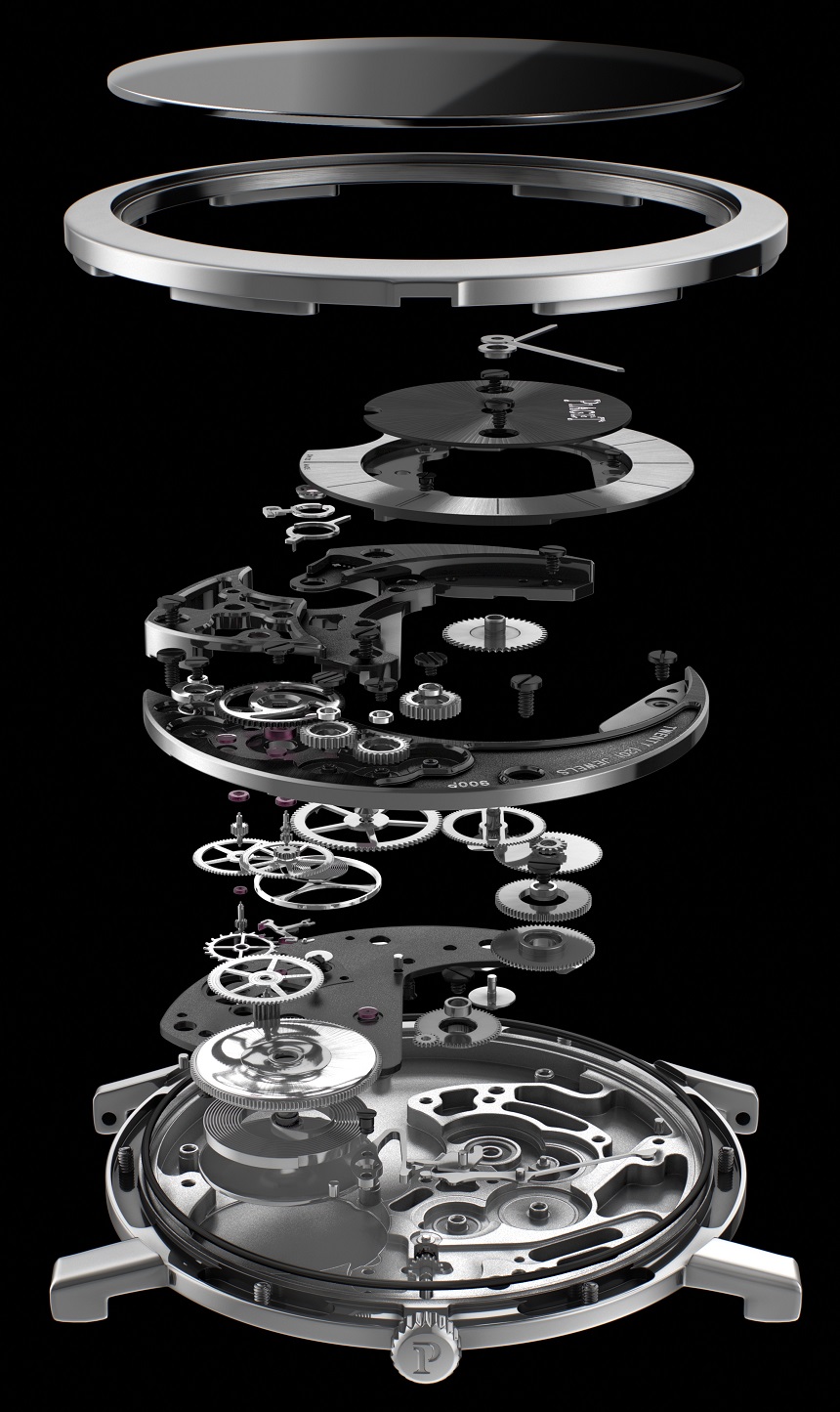 While there are some others, the real masters of “ultra-thin” are brands like Piaget, Audemars Piguet, Vacheron Constantin, Jaeger-LeCoultre and perhaps Arnold & Son (who released the world’s thinnest tourbillon watches with the UTTE (reviewed here) – though we will see what they continue to do in that department in the future. Ultra-thin movements are very interesting, but at some point how thin is thin enough? And beyond some threshold point does more thinness matter for wearability? I’d say that anything 5mm or less is going to wear pretty much the same, being of a similar practical height on your wrist. When you start to shave off fractional amounts of size you are simply getting into the realm of bragging rights. But that is OK. Toys for grown men are frequently about being able to brag to your friends.

I think it is important to discuss what ultra-thin is all about and what goes into it. It is actually more difficult to accomplish than people understand. When aBlogtoWatch visited Piaget in 2011 we got a first hand look at how they design and manufacture their thinnest movements. It is true that the caliber 900P did not exist yet, but as mentioned above, Piaget has been producing very thin movements for decades. It is actually much more difficult as well to assemble a thin movement than a normal one. It isn’t just a matter of cleverly reducing space, but it is about properly machining all the parts. Machines that don’t have too many parts touching can have high tolerances. When you have all the necessary gears crammed into a roughly 2mm thick area, everything is extremely close to touching one another and much lower tolerances must be possible. 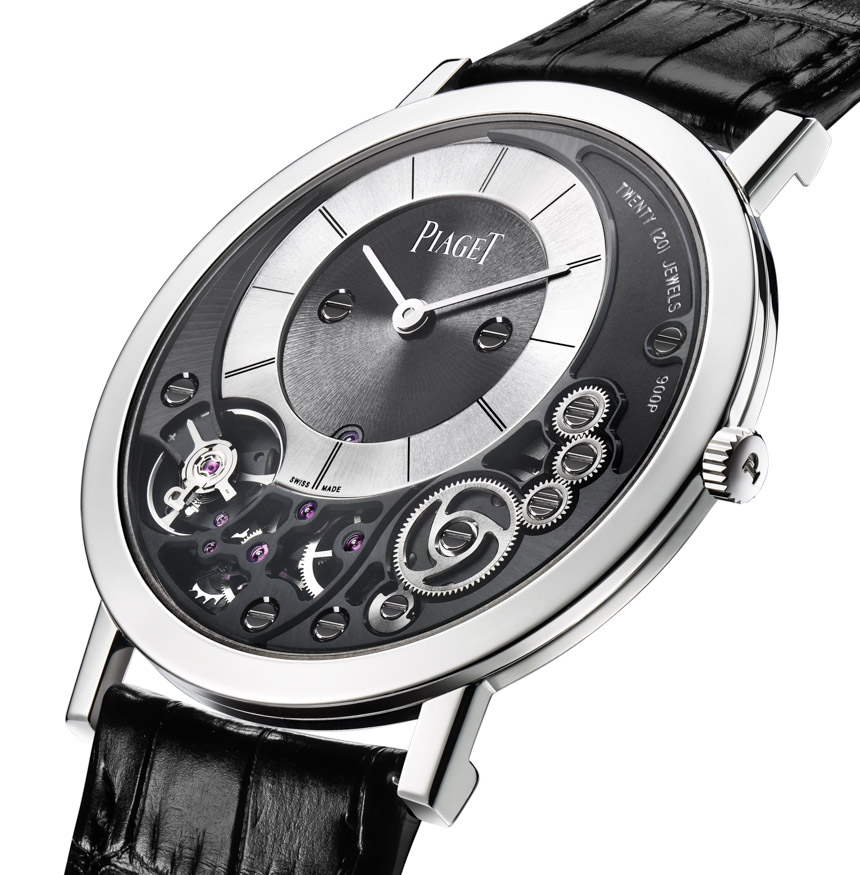 The 900P for example has gears and elements so incredibly thin I am surprised they can be assembled without breaking the parts. This is also the first time Piaget has released a movement that is not only integrated into the dial, but is also integrated into the case. That is really what makes the 900P so unique. It isn’t just a thin movement placed into a thin case like most other Piaget Altiplano watches, but rather a new form of unified entity. How does that work? Well clearly there is no distinct dial as it is integrated into the movement. The mainspring barrel isn’t connected to the mainplate either but exists off to the side, further reducing space. Some of the gears are almost half the thickness they would normally be and the entire movement (along with the case) is still comprised of 145 parts. Manually wound (of course), the power reserve is about 48 hours.

On the dial of the Altiplano 38mm 900P you have just the time with hours and minutes, along with a view of some of the movement including the balance wheel as well as much of the gear train and also the mainspring barrel with winding system. In black and steel-tone colors mixed with the red color of the synthetic rubies, it makes for an elegant view that cannot escape being designed to appeal to watch lovers. It is also worth noting that if you unscrew the caseback, the entire movement pops out. That is because the caseback is actually the rear plate of the movement. All of this was done for the purpose of size mitigation. Piaget really wanted to ensure no one would come out with anything thinner, anytime soon. I have a feeling that no one will. In fact, if you’ve noticed the lack of distinct values for the thickness of the case and movement themselves as they aren’t offered by Piaget. As it is unclear where the case ends and the movement begins (given the design), they can only offer the 3.65mm thickness value of the entire piece as a whole.