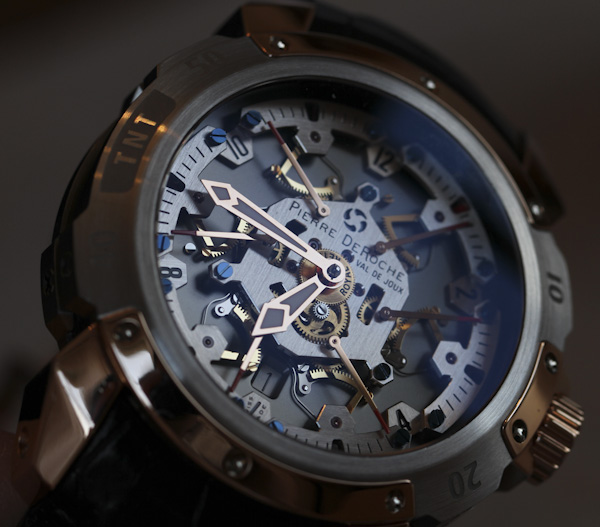 While I am not going to go into extended detail into specific models, I did get a chance to see the entire collection with Pierre high in the Swiss mountains in the Jura where Pierre DeRoche is located. A simple small town guy Pierre doesn’t necessarily look like the guy who would design a sporty and aggressive watch called the “TNT.” 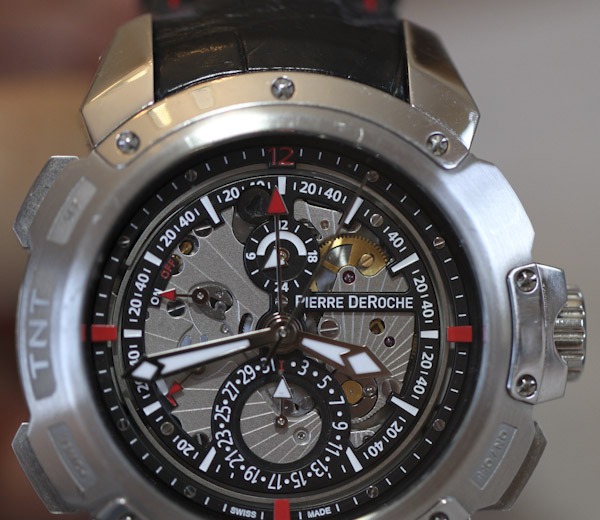 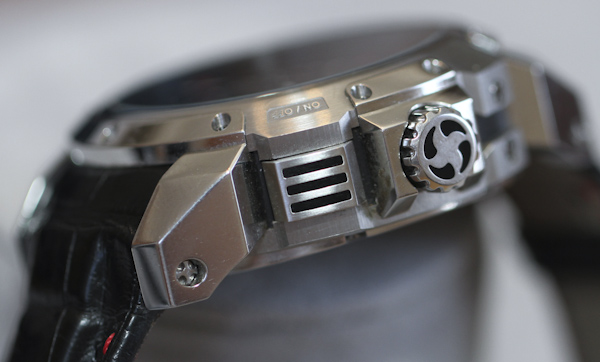 He did however tell me that he was a sort of fitness instructor earlier in life, which might explain a bit of it. The TNT watches came out a few years ago and come in a few forms and sizes. I recall when the TNT range was first released a few years ago. It instantly drew my attention thanks to its distinctive case design and of course the complication in the TNT Royal Retro watch. It has six retrograde hands for the seconds. Each measures ten seconds and then it moves around the dial to the next one. The constant movement of retrograde hands on the dial was just so cool to me. Of course as a watch nerd the mechanically open dial was quite appealing as well.

I believe all of these watches are limited editions. The TNT Royal Retro is currently offered in a 47.5mm wide case that is either in steel and titanium or 18k rose gold and titanium. The case design is intricate with lots of details at any angle. If you are a “screw lover” then you’ll love this watch. I just realized that between the case and dial there are a ton of screws visible on this timepiece. Attached to the case is flush alligator strap with contrast finishing. 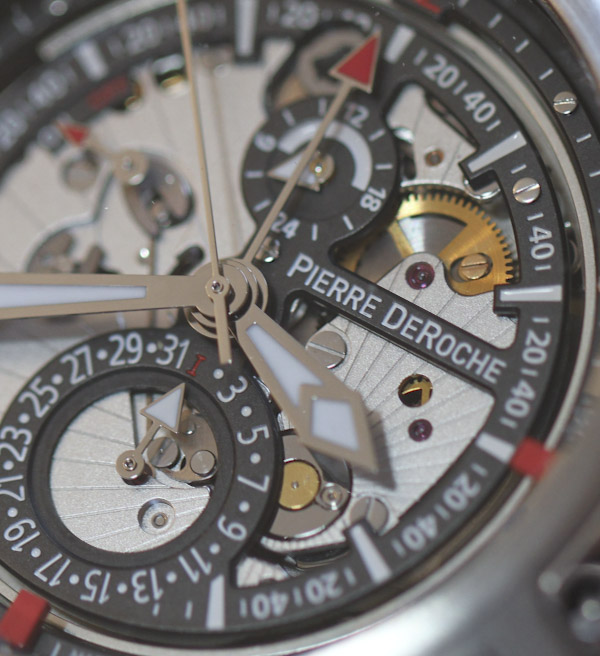 The TNT collection pieces all have DD automatic movements that are well decorated. Over time Pierre DeRoche offered a new automatic rotor and changed the design of the caseback. So it is possible to find Pierre ReRoche TNT watches with different caseback designs. Further, the original size of the case was 47.5mm wide, and some of the pieces still are at that size.

It would not be fair to Dubois-Depraz for Pierre DeRoche not to have a chronograph in the TNT collection. That is where the TNT Penta pieces come in. With a big date and tri-compax array chronograph, these movements just scream “Dubois-Depraz.” Furthering the skeletonized dial concept, the Penta watches have very open dials. How do you feel about the very visible big date indicator discs? 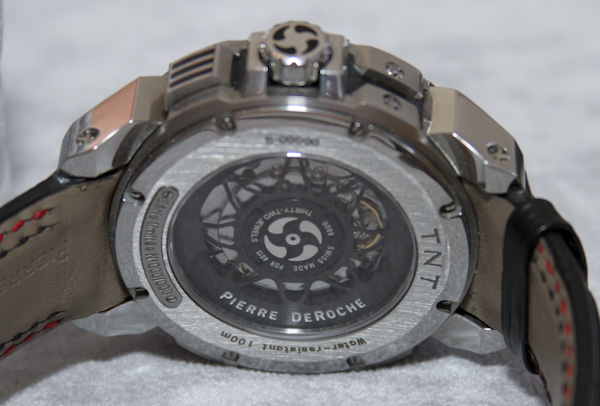 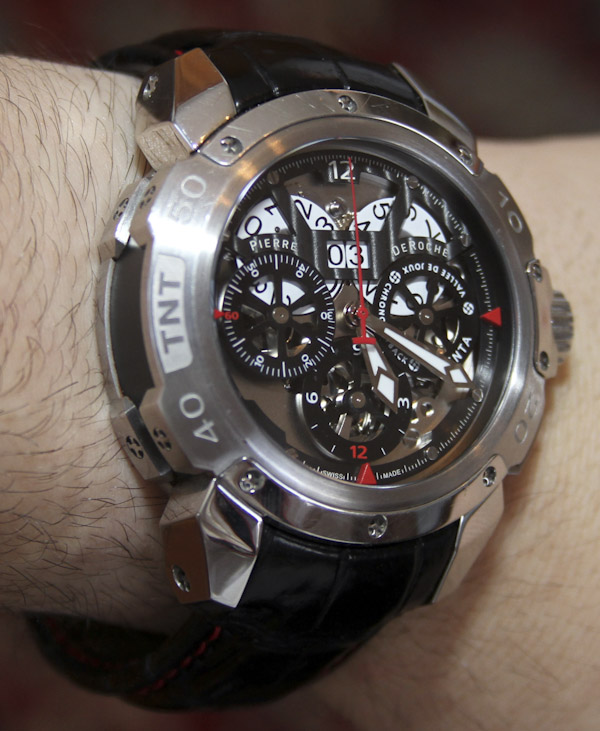 Aside from the central seconds hand for the chronograph, this model uses moving discs in relation to red arrows to indicate the information on the subdials. It takes a bit of getting used to but makes for fun timepieces. These TNT Penta watches are also 45.5mm wide and available in mixtures of steel, titanium, and gold. They are mostly limited to 201 watches each.

A very interesting Pierre DeRoche TNT model is called the TNT Rendezvous. This watch combines an alarm and minute repeater combination. The result is an alarm that plays a chiming noise (using a bell and gongs) when “it is time.” The watch dial has a lot going on, plus it is skeletonized. I think that they did however do a good job making it as legible and functional as possible. 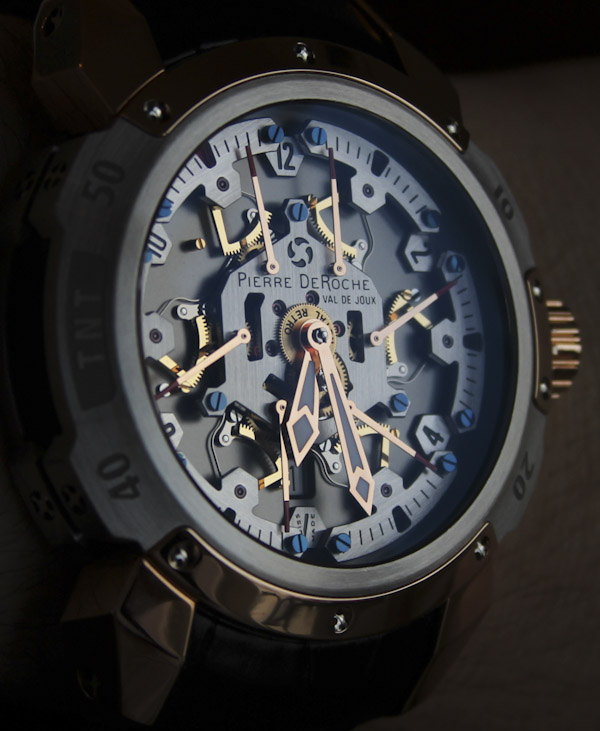 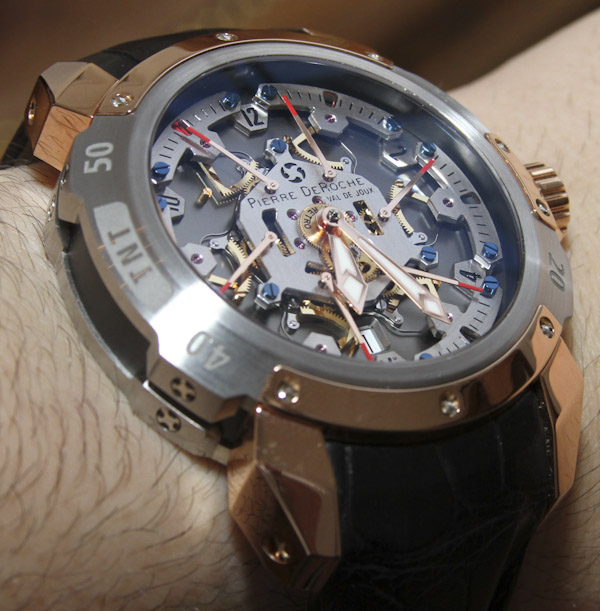 On the dial of the TNT Rendezvous you have large hands for the time (with seconds), and alarm indicator hand (to set the alarm), and alarm on/off indicator, a power reserve indicator, the date, and a day/night indicator for the time. To explain the watch better I did a little video for you that should be part of this post. Pierre DeRoche doesn’t actually state the watch as having an alarm. They use the Rendezvous name instead. Part of that has to do wit the fact that the alarm sound isn’t very loud – as is the case with most chiming watches that have any type of water resistance. They rather consider the watch as offering a “friendly reminder” versus an alarm. 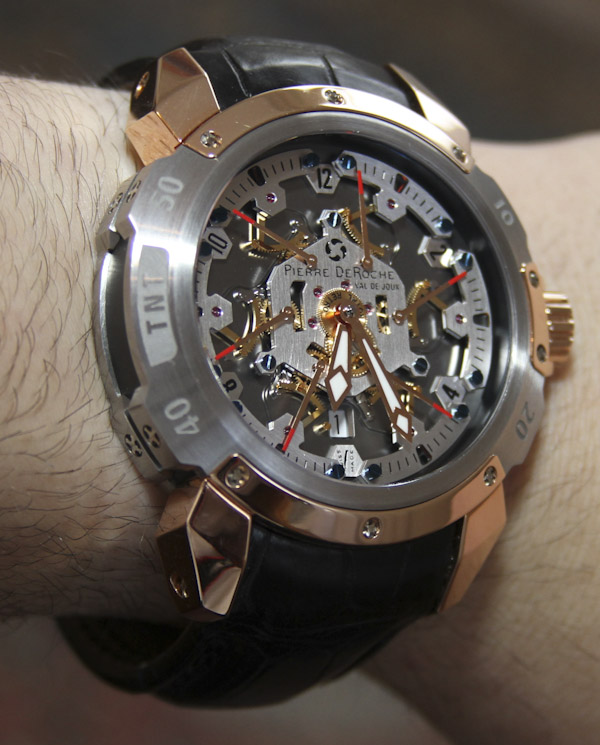 Pierre DeRoche watches are a fascinating display of boutique Swiss watch brands operated by people who are in the heart of “watch land.” There is no big city marketing guy or company who decided to build this brand. This watch is by a guy from a watch making family who has probably lived and breathed watches way more than most of us. While modern and aggressive in its design, the TNT collection is a piece from a small boutique Swiss brand with very traditional values.