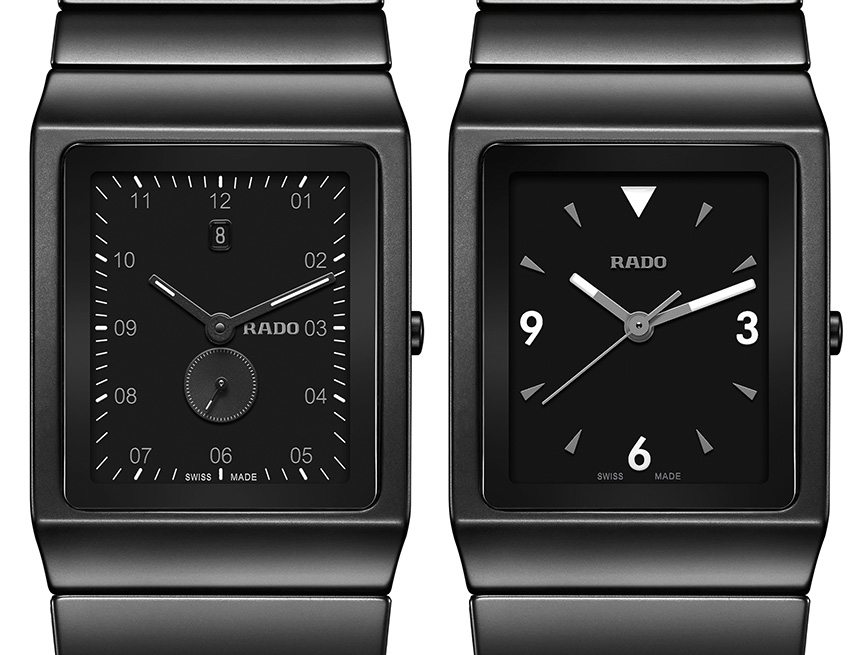 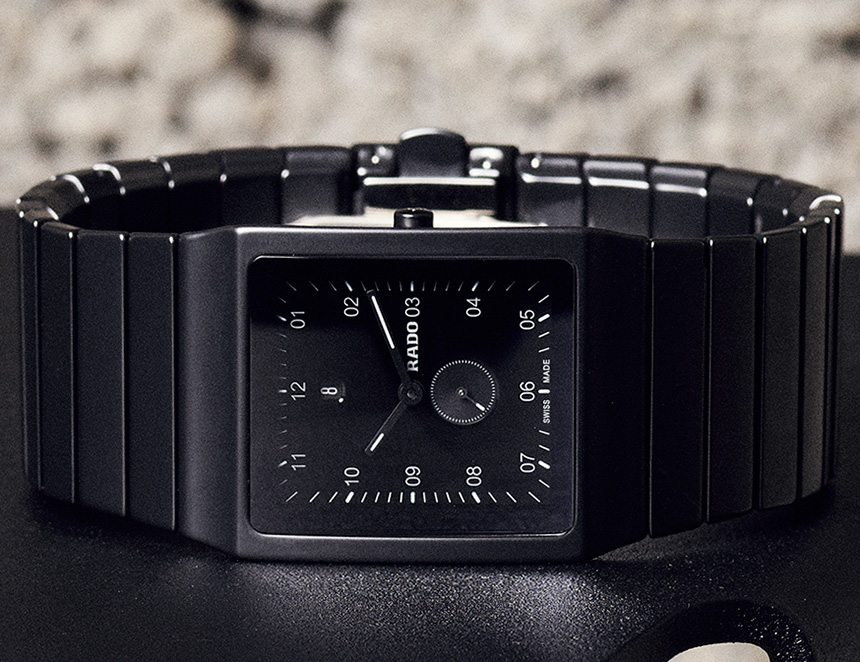 Ask someone what they think of Rado right now, and they might mention Andy Murray (as a brand ambassador, the tennis star often sports the Rado D-Star 200). But there are some things going on behind the scenes at this company. Fans of Rado love the company because they love the designs, none perhaps more so that the famed 1998 Rado Ceramica. Well, now Rado has collaborated with industrial designer Konstantin Grcic to breathe life into an already well-known piece with the new Rado Ceramica Konstantin Grcic watch (at least, that’s how we’ll refer to it). Still present is the sleek stature and minimalist couture, only this time, Grcic has taken a few liberties with the infamous sheen of the originals. Let’s take a look to see how he has been able to give it his interpretation. 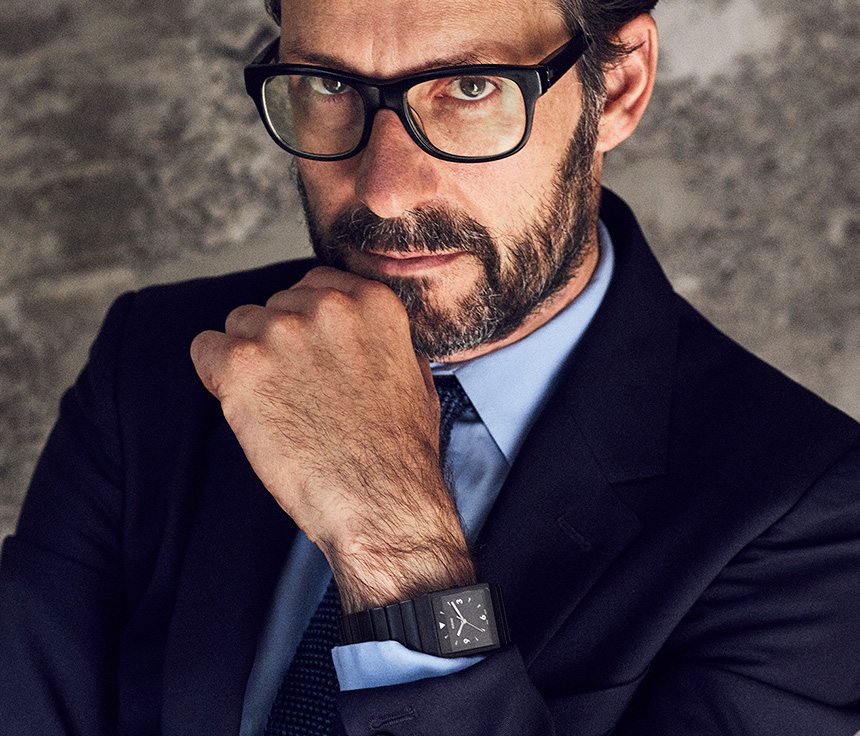 The Rado Ceramica is known for being a modernist piece. Rado produced quite a bit of fanfare when the original was released due to the use of their patented plasma high-tech ceramic. Rado has a history of using unique materials for their casings, though, and had previously used cermet, a titanium-ceramic alloy, in the Sintra. The ceramic was smoother and shinier, for sure, and anyone who owns or has handled one knows what I’m talking about. Grcic’s work as an industrial designer has led him into the realms of furniture with Magis and Mattiazai, while some of his work is on display at the Museum of Modern Art. His designs are clean and functional but not overly embellished. The Rado Ceramica seems like a good starting point for his foray into horology. 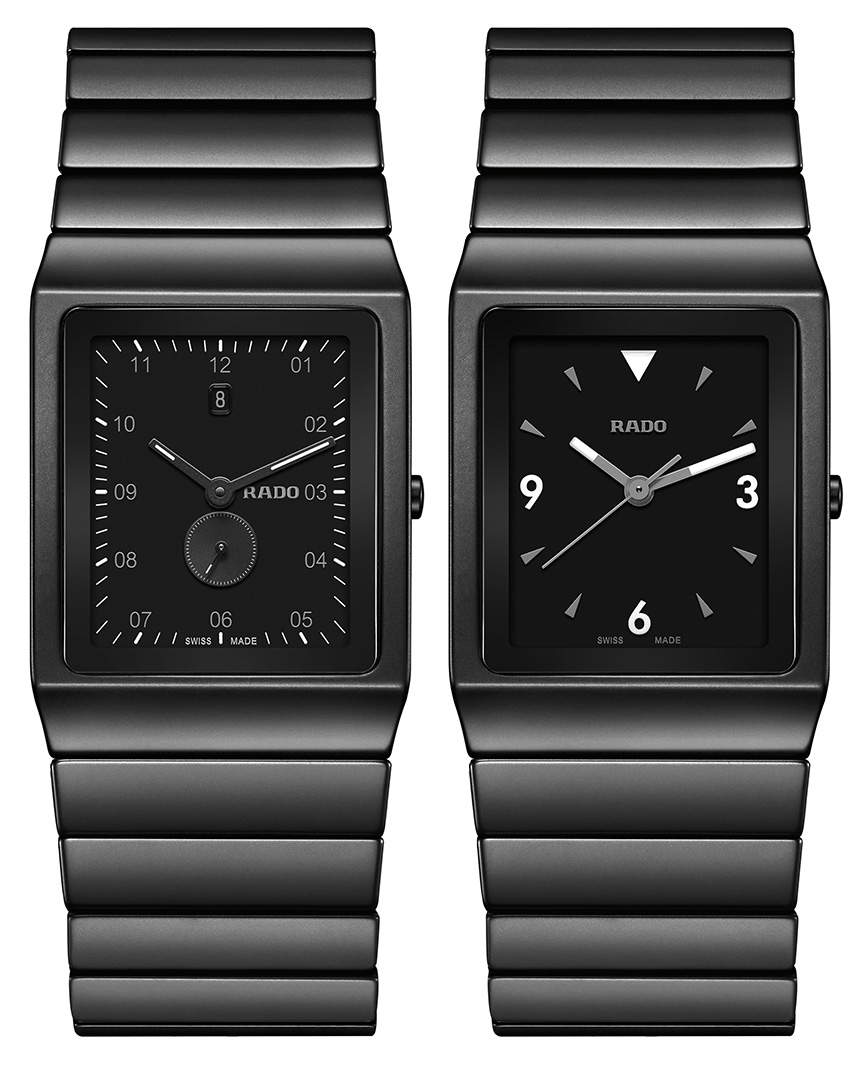 Grcic worked with Rado to produce four pieces in this collection: two men’s watches and two for women. The men’s line features Ref. 256.0706.3.016 and Ref. 212.0708.3.015 which they call the “Signature Model.” Each piece measures 30.0 x 41.7 x 7.6 and both models exhibit a more subdued matte black monobloc case with a PVD-coated caseback crafted from titanium. The “Signature Model” also varies in that it showcases a custom numbered engraving out of 701 pieces. Each piece is rated for a 50-meter water resistance and houses a curved sapphire crystal. 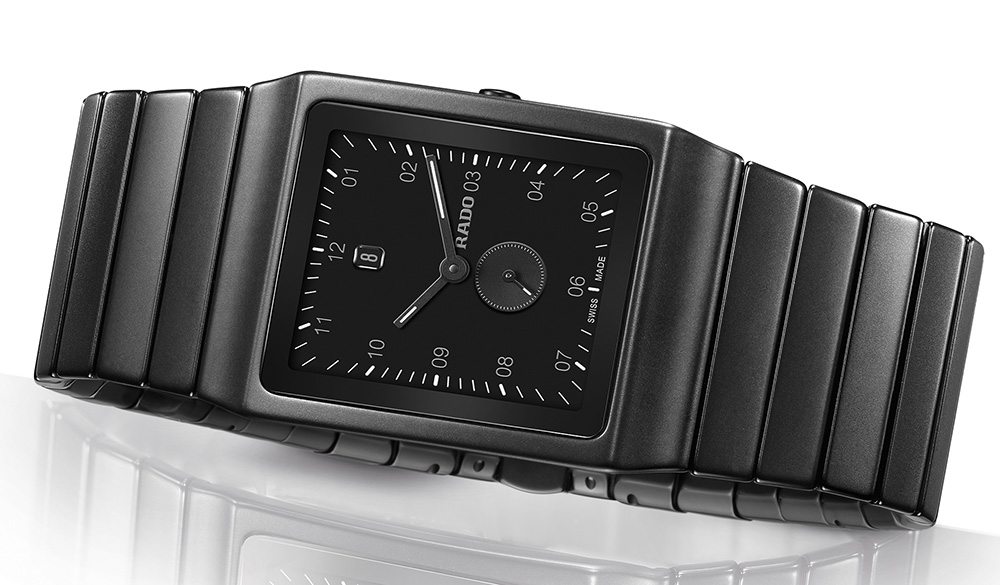 The Ref.16 features a square minute-track with a small seconds subdial at 6 o’clock, while the “Signature Model” sticks with a circular 3-6-9 motif, both on a deep black lacquered backdrop. Both models receive a helping of Super-LumiNova to throw some light in the darkness as well. The “Signature Model” may be a little cleaner but for those of you that prefer square watch faces on square watches… the choice is clear. Not pointing any fingers! 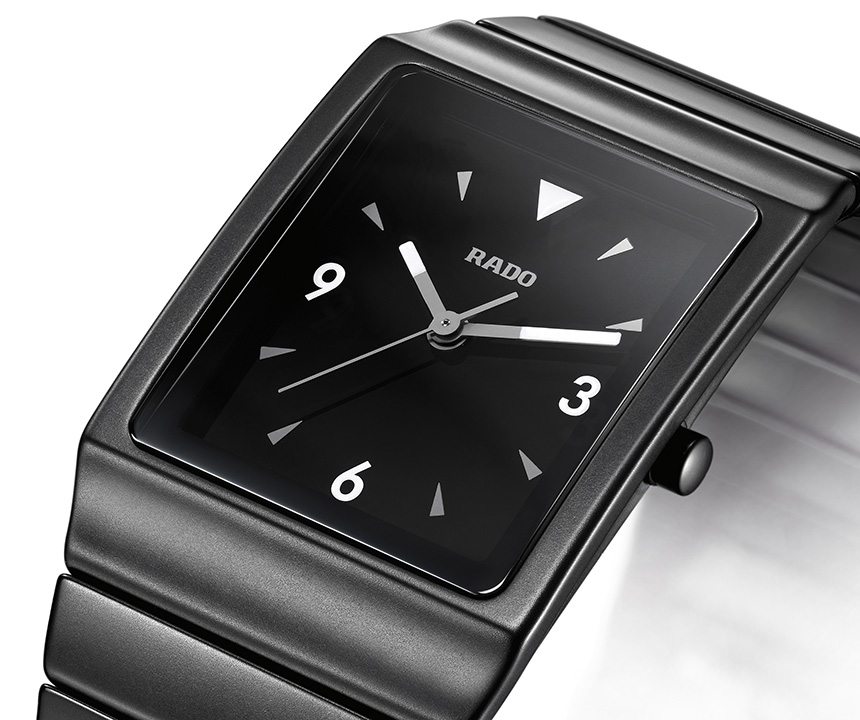 The movement is a quartz 8 1⁄4 ETA E61.511 that houses 9 jewels and adds a date window under 12 o’clock on Ref.16. Sure, it would have been great if Rado had put an automatic movement in here, especially given the size of the piece, but fans of this style aren’t really buying it for the movement. This is about the look and the feel. 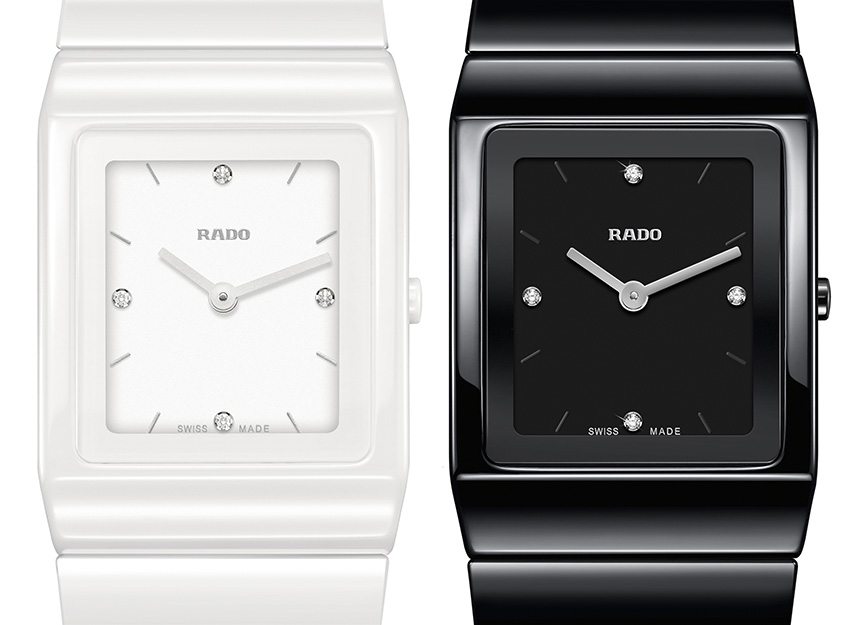 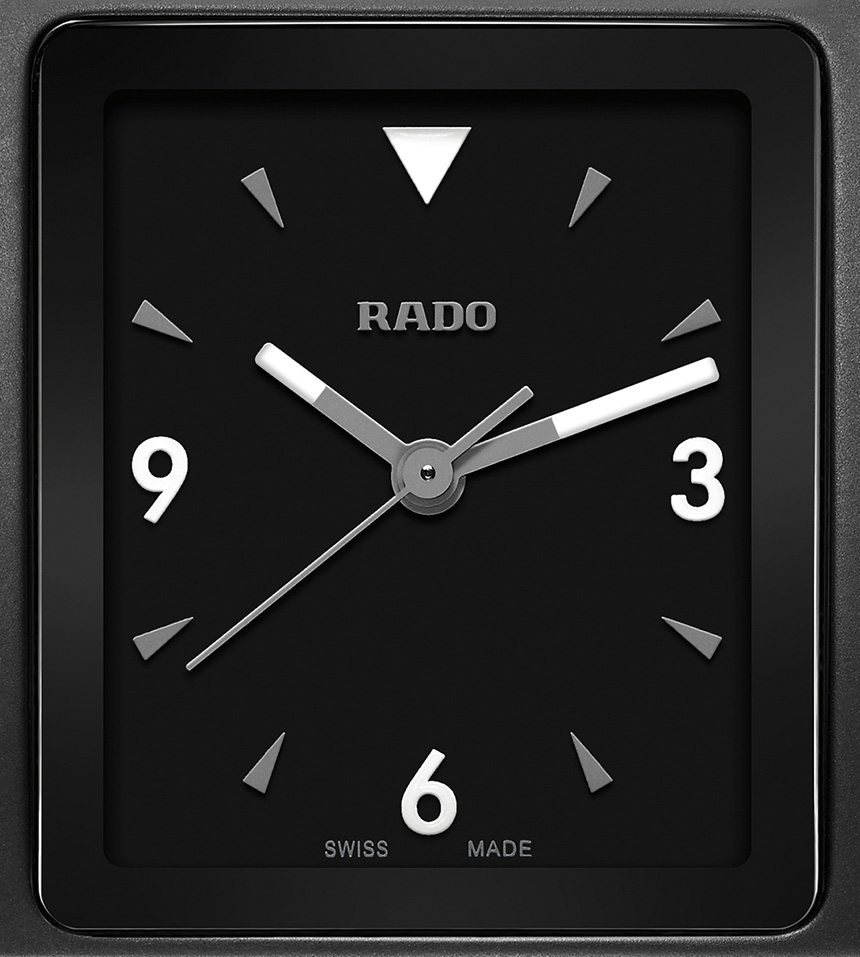 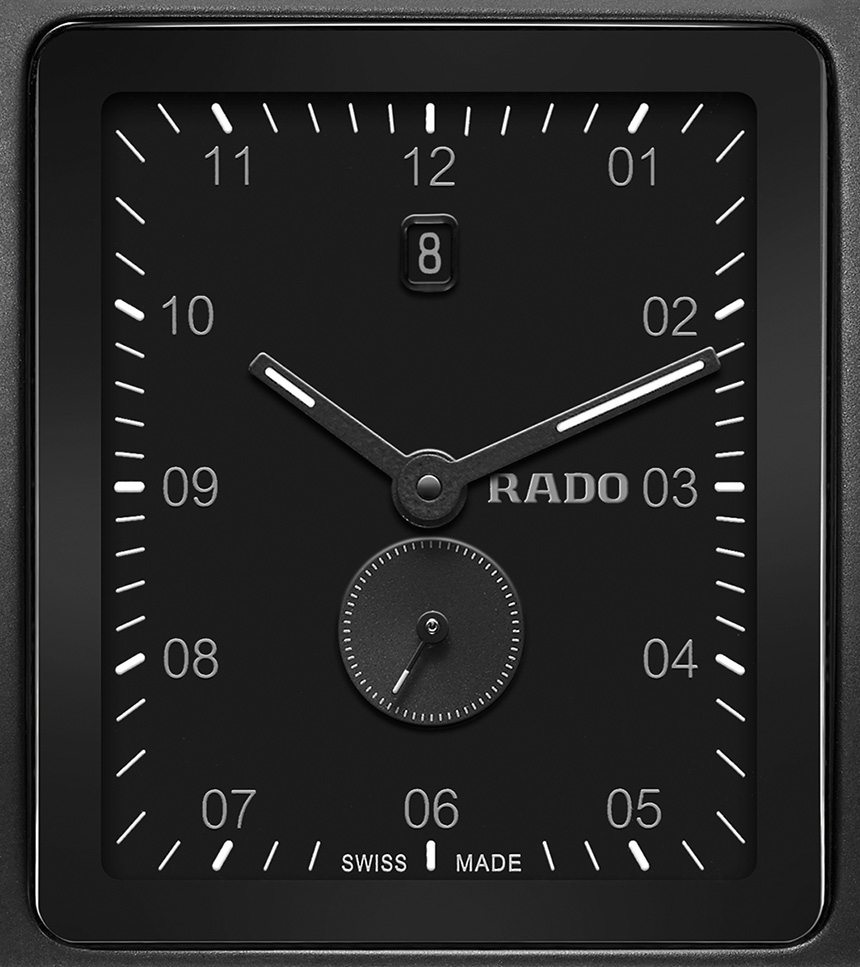 Grcic’s biggest contribution to this collection is obviously the matte finish. This is a stark contrast to the powerful luster of the original Rado Ceramica watches that debuted in the ’90s. This assortment is certainly more understated and the bracelets have received the same treatment that make for an overall rich and clean appearance. My favorite here is definitely Ref.16 simply because of the layout of the dial. The date window is small enough to be somewhat clandestine on the dial, so it certainly isn’t a big detractor here. Rado is on the right track by letting a fresh set of eyes take ahold of the Rado Ceramica this time around. Maybe next time we’ll see a little more under the hood for those holding out for an automatic movement. 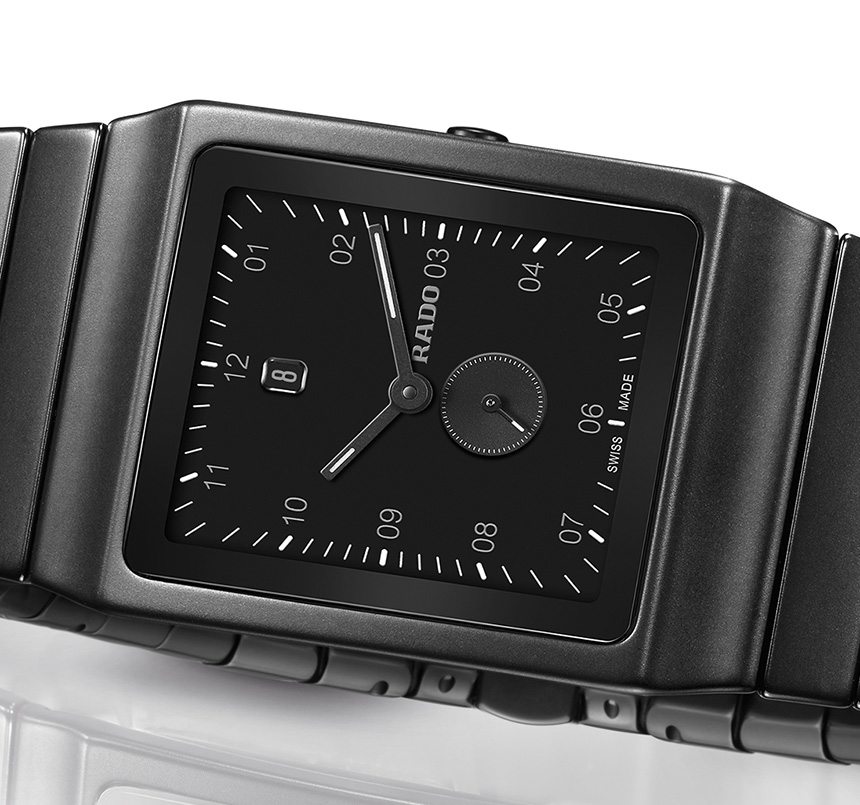