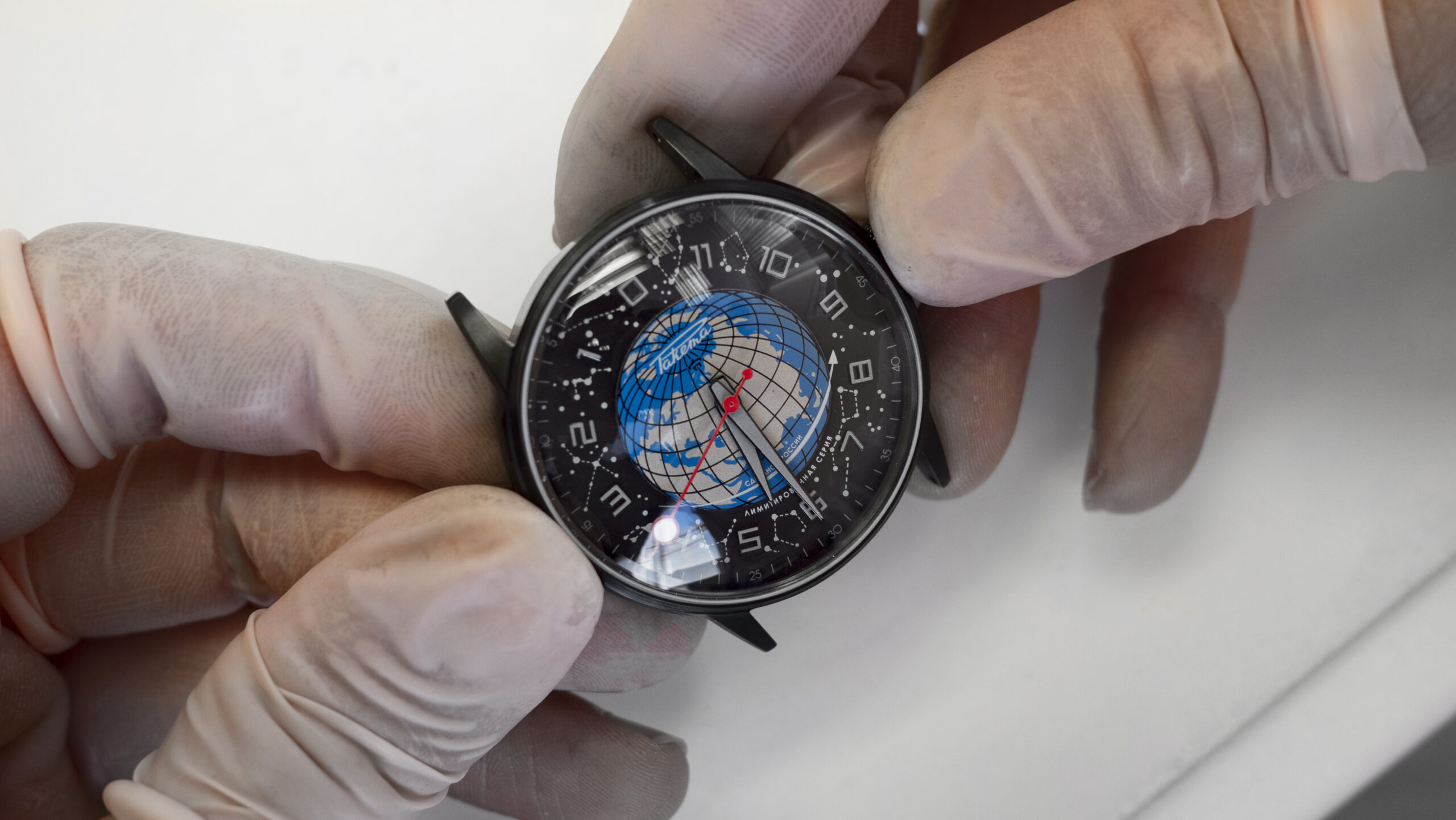 Raketa Turns Back Time With The ‘Russian Code’

12 Comments
by SponsoredPost
Sponsored post presented on aBlogtoWatch by advertiser

Despite the constant cascade of new watch releases that seem to crop up on the daily, it is a rarity to come across anything that challenges convention as boldly as the innovative Raketa “Russian Code.” In fact, it opposes the conventionality of “clockwise rotation” itself. There is a reason that the word “clockwise” has become commonplace. It is a precedent that is supported from early time-telling training in elementary school, through the acquisition of a first wristwatch, and in viewing virtually every clock that comes into view. Raketa’s newest model, the “Russian Code,” is going to be an acquired taste, as it bucks the notion that there is only one “correct” direction in which the wheel of time turns. In fact, this piece stands proudly in defiance of the widely accepted norm by featuring dial numbering and hands that move in reverse. 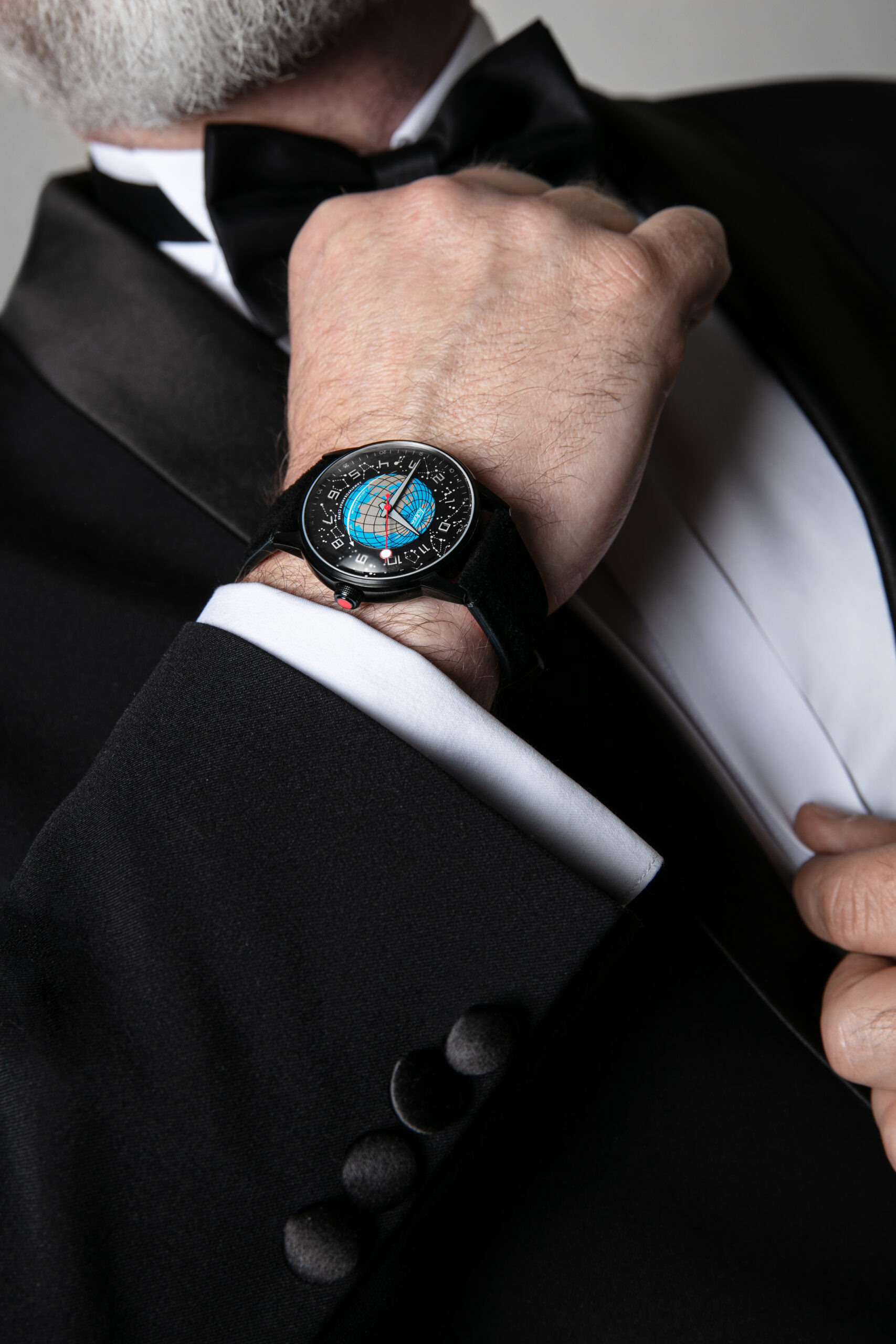 Raketa is a business that has existed for over half a decade. Formed in Russia in 1961, the brand was created to celebrate the successful, piloted spaceflight of Cosmonaut Yuri Gagarin on Vostok 1. So, not only was Raketa borne out of space exploration but brand designs have been informed by the “final frontier” ever since. Even the name itself, “Raketa,” translates to “space rocket” in Russian. As the most well-known brand produced by the Saint Petersburg-based Petrodvorets Watch Factory (who also manufacture Podeba), Raketa’s legacy is firmly cemented through its use in Antarctic expeditions, military applications, and most notably, ascension into outer space. 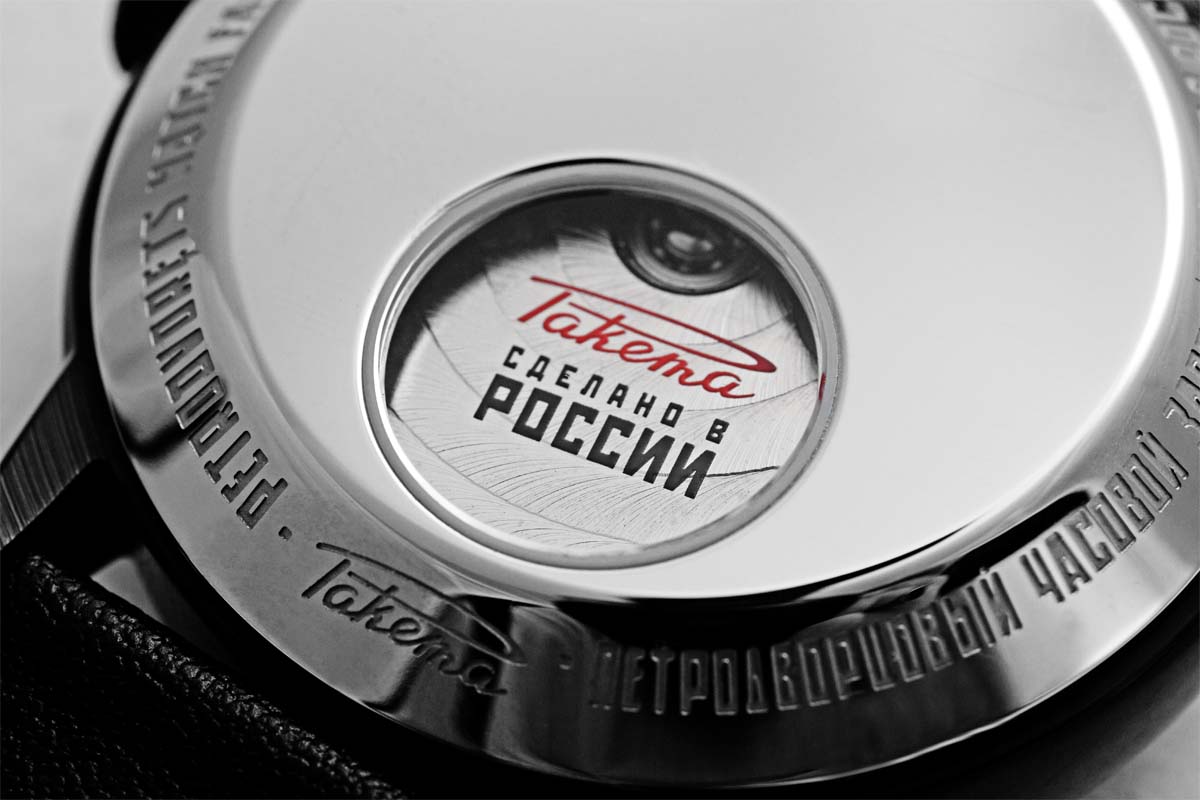 On the topic of astronomy, it is a little-known fact that the universe itself rotates in a counter-clockwise fashion. The planets of our solar system revolve around the sun in this direction, and most of the planets (along with the sun), as well as asteroids, spin the same way. Scientists believe this to be a result of the events that occurred when the Milky Way was initially formed and is little more than the culmination of great cosmic chance. It is likely that the “clockwise” concept originated with the first sundials thousands of years ago. Though the sun moved from right to left, the shadow it cast moved in the opposite direction. When clocks and watches came around, hands replaced shadows but continued to follow the same path. Nevertheless, recognizing that the typical clockwise direction is the inverse of the universe, Raketa created a timepiece that is in harmony with the celestial flow. 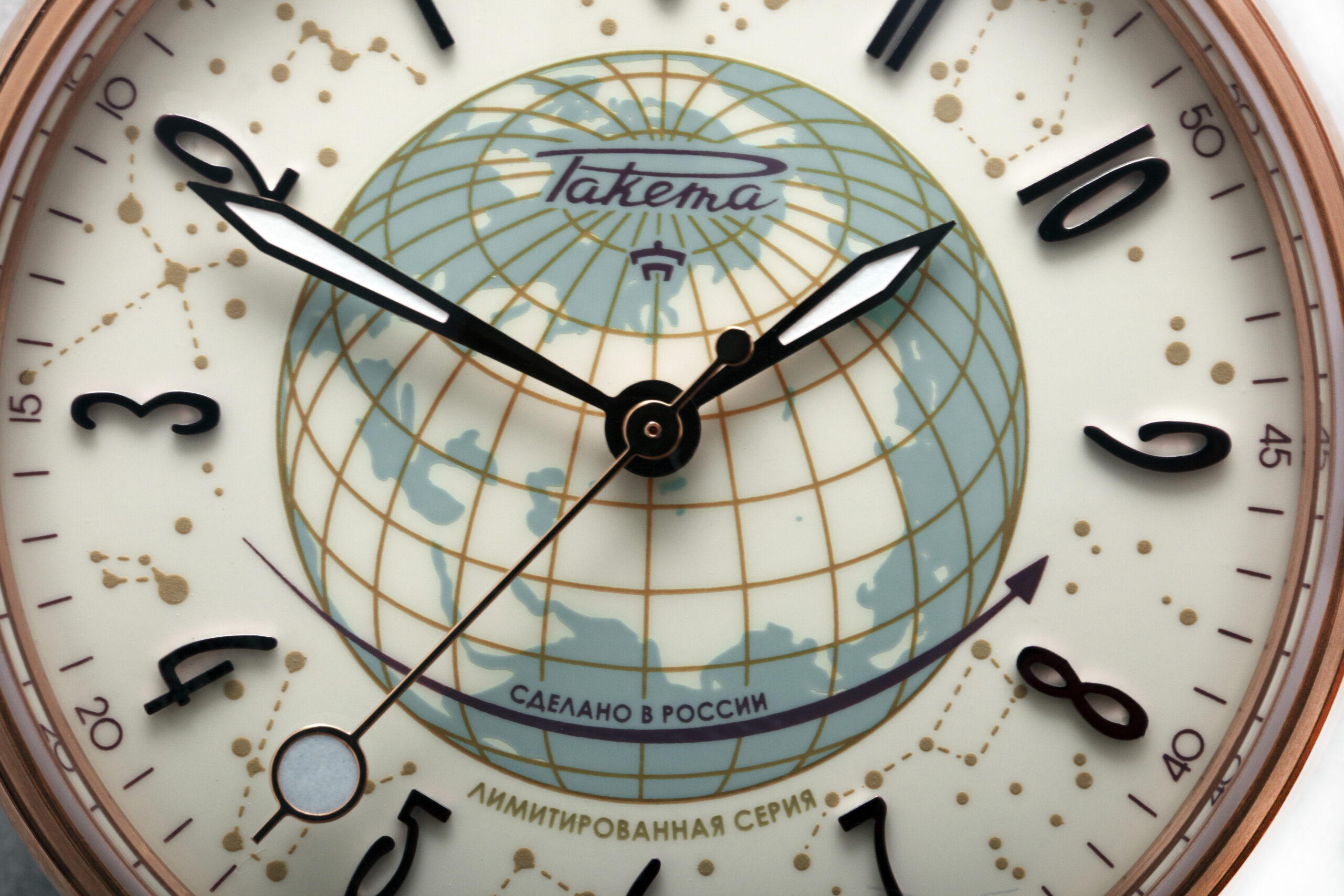 There is no doubt about it: Time-telling on the “Russian Code” is going to be a little uncomfortable upon initial wear. While it may not appear all too unusual at a fleeting glance, closer inspection reveals the source of the discomfort. None of the stylized, Arabic numerals are placed where they belong, save for the 6 and the “0” which denotes the typical twelve. Even more unnerving is the steady, backward sweep of the seconds hand. This is a watch that is truly unlike anything else.

In order to create this avant-garde timepiece, Raketa had to get creative when devising a movement that allowed for reverse time-telling. In order to do this, engineers made significant mechanical modifications to the escapement and mainspring barrel and came up with the Caliber 2615R.  Fortunately, Raketa manufactures 100% of their components in-house, which allowed them the freedom and know-how to create something so singular.  Two operational byproducts of the atypical movement are evident when utilizing the crown. For one thing, the hands must be turned counter-clockwise when setting the time. Secondly, when hand-winding, the crown must be turned towards the wearer, rather than away. 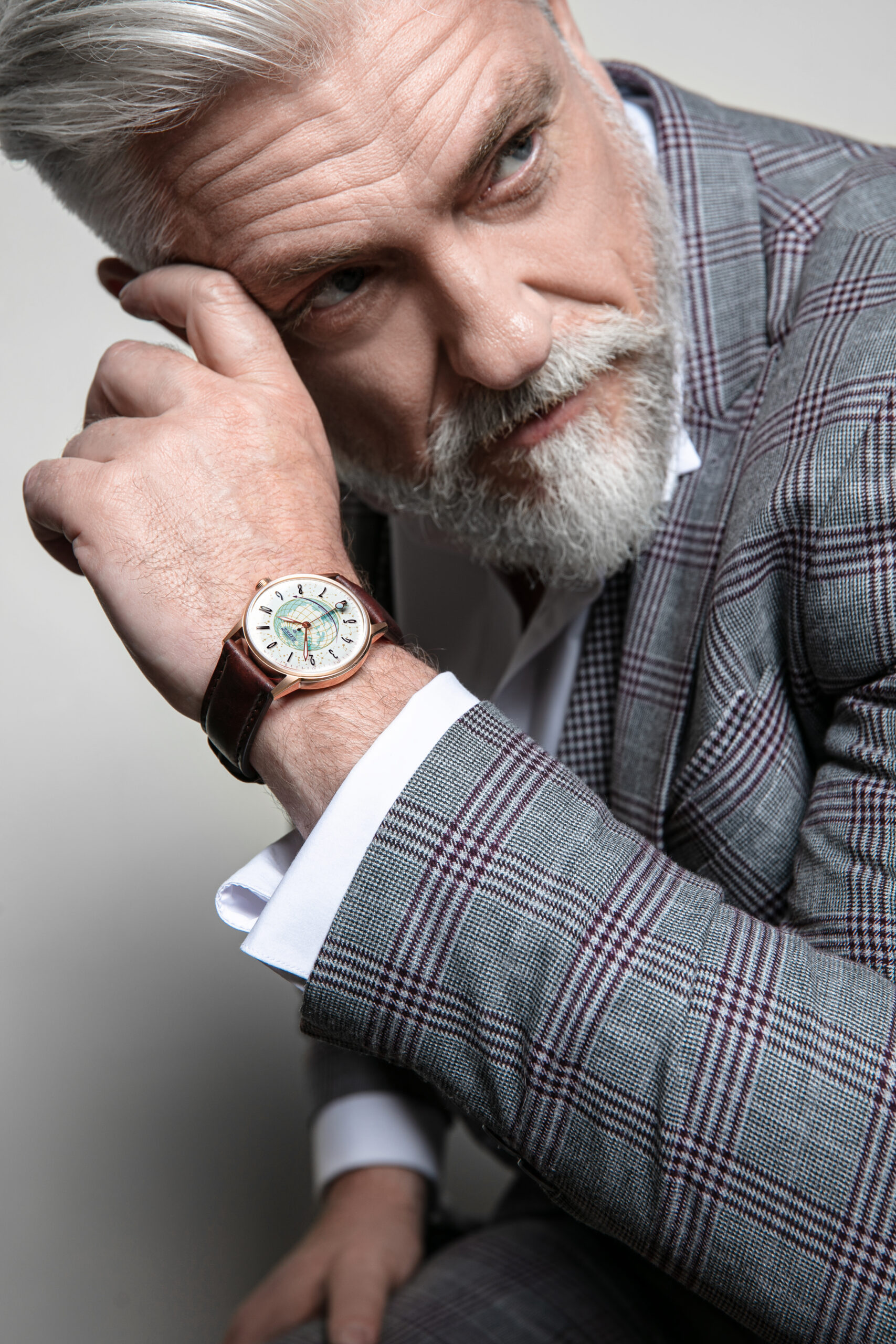 The “Russian Code” itself is a 40.5mm diameter three-hander that clocks in at 45mm lug-to-lug. The case thickness is imposing, at 16.5mm, but stands within the realm of reasonability for a statement piece such as this. The interplanetary theme that guides the function of the watch has been carried through in design, as evidenced by the large representation of Earth that adorns the center of the dial. Surrounding The Blue Planet are numerous constellations, from Ursa Minor to Cassiopeia.  Another fantastic detail is the large, lunar-grey lume plot at the end of the seconds hand, which mimics reality and orbits the Earth. For legibility purposes, the hands are generously filled with Super LumiNova, which is more than sufficient for stargazing, either into the night sky or on your own wrist. 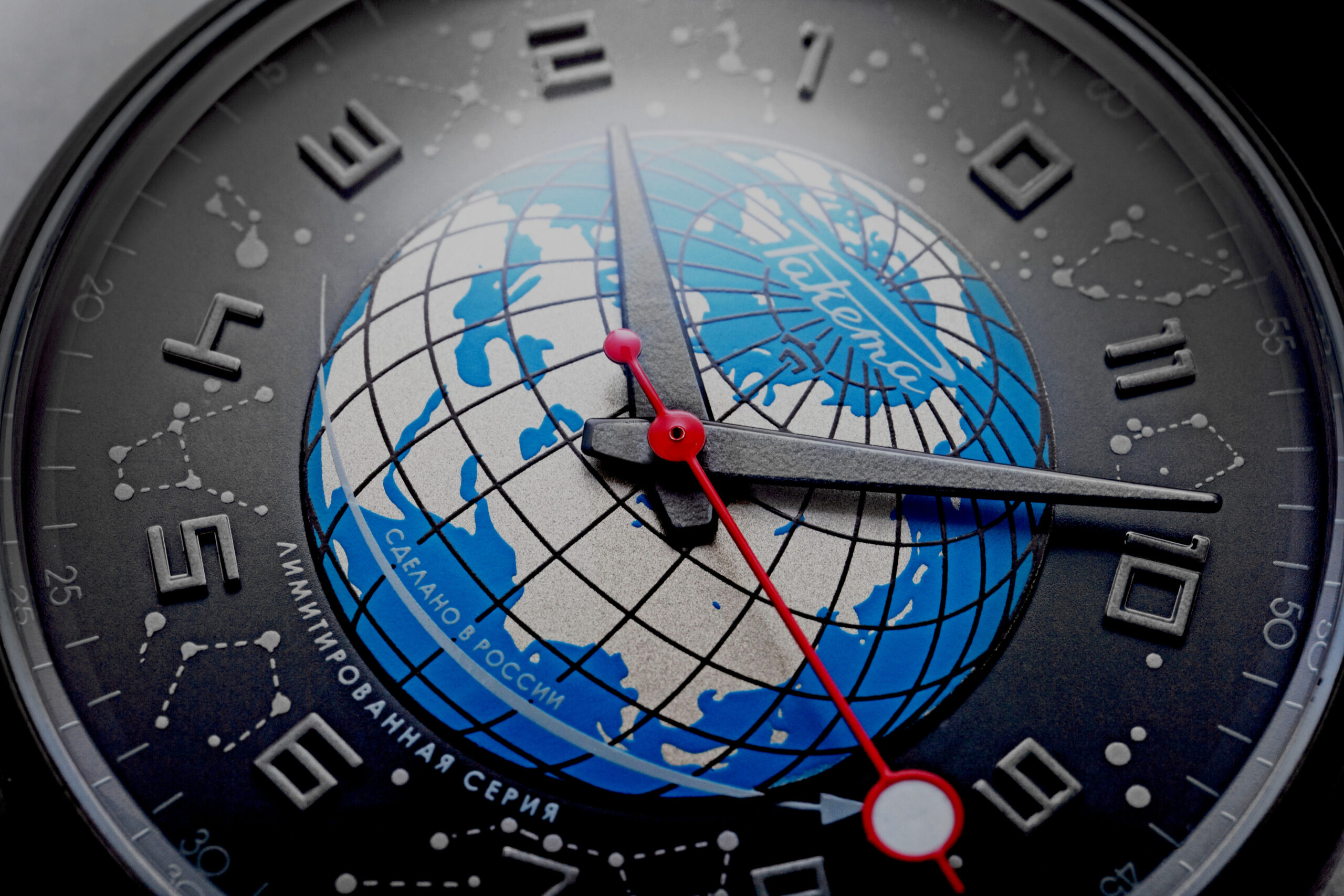 The “Russian Code” is available in two colorways, each limited to 300 pieces. The gold model features a cream dial and gold sword hands, while the black DLC variant features a more robust handset with out-of-this-world gray lume. The black model also has a pop of color through the utilization of a red seconds hand. Both models have a mostly solid caseback with a viewing port that proudly displays the Raketa-signed rotor and come equipped with a 22mm leather strap. The gold version retails for a price of 1150 Euros (without VAT) and DLC has a price of 1208 Euros (without VAT). This timepiece is a formidable force that is sure to challenge your perception of time itself and get you in sync with the rhythm of the universe.