This probably unique, cushion-shaped mono-pusher chronograph was made by Patek Philippe in 1928 and was sold in 1931. There is good reason why these dates might sound familiar to most of us, as we are presently living in a global economy that is, for the most part, hindered by a major economic crisis. In 1929 the Great Depression affected the watch industry much more severely than the one that we have been experiencing lately. Nevertheless, it was the “best clients” of certain watch brands who played a major role in keeping their favorite manufactures going. Part of this was by requesting, and paying hefty premiums for, one-of-a-kind models.

The piece above is believed to be one of those made-to-order watches, one of only a handful cushion-cased chronographs produced by Patek Philippe. More importantly, it was the only single button chronograph in white gold that Patek has ever produced. That made this watch all the more desirable for collectors. It further has a timeless design that is made complete with white gold spade hands and applied Breguet-numerals. Beyond the mere rarity of the combinations of materials and design elements that are found on this watch, it is important to remember that this piece was made nearly 90 years ago yet it looks, and functions, as well as anything produced ever since then. In doubt? Just take a look at the recently released Reference 5950, a remarkably similar watch by Patek that debuted in 2010. Consider the rarity, importance, and power in withstanding the passage of time and the $3.6 million dollar price will seem just that little bit easier to take in. Patek started manufacturing the Reference 2499 in 1951 and produced around ten each year, for over 35 years. For most collectors, the importance and perceived value of this model lie in its perfectly proportioned case and dial layout, combined with the three complications that define some of the most desired references of Patek even today: a perpetual calendar, phase of the moon indication and chronograph. Its desirability is further proven every time when a 2499 comes up for auction with it consistently being one of the most important lot of any sale. While only 349 pieces of this reference exist, nearly all of them were produced in yellow gold as only about 10 were made in pink gold, and just two were cased in platinum.

Those last two pieces were actually produced not for sale but to stay within Patek, as a celebration of the three and a half decade long production run of this iconic piece. One of those two post-production platinum models did eventually leave Patek, at the historic “The Art of Patek Philippe” auction in 1989, and was sold privately until it ended up with rock legend and serious watch collector Eric Clapton. It was, and will certainly remain, the only white-metal 2499 in private hands. Since it left Patek, it was available to the public for the first time when it was sold by Christie’s in 2012. The final bid for the 2499/100P exceeded 3.6 million US dollars. Although Patek has stopped producing their Reference 5004, for the 5th Only Watch auction (held in September, 2013) they went on to create one final and completely unique version, the 5004T. It is housed in a highly polished titanium case, a seldom-used material by Patek. Making the design even more distinct compared to other 5004 versions (and other Patek watches in general) is a dial made of solid gold, hand-engraved with a checkered pattern.

The watch features the Manufacture’s amazing caliber CHR 27-70Q, based on a blank movement created exclusively for Patek by Nouvelle Lemania. Its functions include a split-second chronograph as well as a perpetual calendar with phase of the moon indication. The 5004T, without doubt, was an unusual and very special watch from Patek Philippe. This sentiment was strongly reflected in the price the piece achieved at the auction. It had an estimate between around 400,000 and 600,000 Euros, a range this unique offering far exceeded with a final bid of 2,950,000 Euros, coming in just below 4 million USD at the time of the event. Another absolute rarity among Patek Philippe’s most coveted wristwatches is this unique, chronometer certified Reference 2458. Watches with chronometric certificates might sound familiar to many: COSC is the official Swiss institution testing subjected watches individually for their timekeeping performance and issuing certificates once they pass the tests. However, timepieces with Observatory provenance are on a different level. Before the advent of quartz watches during the 1960’s, Observatory Precision Contests were organized to verify the finest and specially developed movements. Patek has won over 700 titles over the course of several decades on these competitions. Joe Ben Champion, who ordered this watch, was a successful criminal defense attorney, and he also was one of the most important clients of Patek Philippe.

Rumors say that he also happened to be obsessed with accuracy, an attribute that probably came in handy upon standing on the defense’s side in some of the most challenging trials. A match made in heaven, he requested a Chronometer certified watch from Patek, a piece he received in the form of this very timepiece. It was equipped with a special movement of which although thirty were made to enter Observatory contests with, only two had ever been cased. To top it all off, this piece remains the only Reference 2458 in platinum and it also comes with a platinum bracelet, a leather strap, as well as an additional diamond-set dial. The Caliber 89 is the most complicated watch that Patek Philippe has ever created. The manufacture presented it in 1989 as it celebrated its 150th anniversary. The watch from initial drawings and plans to the final piece took 9 years to develop and manufacture. Its 4-level movement comprises 33 complications, among which are the perpetual calendar, sunset-sunrise and sidereal time displays, Westminster-chime on four gongs, Grand and Petite sonnerie, alarm, thermometer, and a titanium-caged two-minute tourbillon. The movement itself contains 1,728 hand-finished parts, 126 jewels and weighs in at an incredible 600 grams – yes, that’s just the movement!

A lesser-known fact about the Caliber 89 is that not one but actually four iterations exist, one each in white, yellow and pink gold as well as one in platinum. Shown above is the yellow-gold version as sold by Antiquorum for nearly 5 million US dollars in 2009. While this remarkable piece is referred to as a pocket watch, with it being 88 millimeters in diameter and 41 millimeters thick, accompanied with an overall weight of 1,100 grams (or 2.4 pounds), it is best to keep it at home, in a safe, locked away. The Reference 1527 is the most expensive wristwatch by Patek Philippe ever sold on auction, but it is only upon a closer look when it reveals exactly why it managed to fetch such a stratospheric price. First of all, there is the time when it was made: between 1943 and 1944. It is not merely the fact that the watch was produced during the Second World War, but also that this particular one of a kind piece served as a forerunner to some of the most iconic wristwatches that Patek Philippe has made ever since. For the knowledgable Patek collector, this piece is a time machine: its elongated and slightly curved lugs, its dial layout and its unusually large diameter for the time of 37.6 mm all preceded other famous Patek references by at least a decade. Furthermore, the overall design and size of this one-of-a-kind piece remains timelessly elegant even 70 years after its creation.

This piece was first available for sale more than twenty years ago when it was listed for auction. It had been locked away until it came up for auction at Christie’s in 2010. It required great efforts from archivists to further research the past of this piece, as when it was first sold around 1990, there was not much known about it. Ultimately, thanks to the archives of Patek Philippe, it was revealed that it was a perpetual calendar in a reference 1527 case and as such, among the two complicated iterations of this model number ever made by the manufacture. The other piece lacked the chronograph function and belonged to Charles Stern, the first owner of Patek from the Stern family. The other piece is this unique 1527, which not only proved to be the most complicated piece of this reference, but also a time machine that preceded some of Patek’s most famous wristwatches by decades. The Supercomplication is among the most complicated and historically important watches ever made by Patek Philippe, or as a matter of fact, by any other watch manufacture. With its two dials, 24 complications, more than 900 parts and a weight of over 1 pound, this 18 karat gold pocket watch pushed the limits of mechanical complexity way beyond any other watch ever produced before. Among other complications, it features a perpetual calendar, a minute repeater with Westminster Chimes, sidereal time and a celestial chart including a mapping of the sky over Manhattan. Following five years of planning and assembly, it was delivered in 1933 to its customer, Henry Graves Jr., a millionaire banker and avid watch collector from New York responsible for some of the most valuable Patek Philippe watches on earth.

The watch held the title of the most complicated watch for over six decades, until 1989. And while it was deprived of that title by another creation of Patek Philippe, the Supercomplication managed to claim yet another record title in 1999 as it sold for just a bit over 11 million US dollars at a Sotheby’s auction. On the 11th of November, 2014, Sotheby’s has re-auctioned the Patek Philippe Supercomplication, selling it for a staggering 20.6 Million Swiss Francs, making the final price $23,984,106 US Dollars including buyer’s premium. This has made this magnificent watch the world record holder yet again as the most expensive timepiece ever sold. 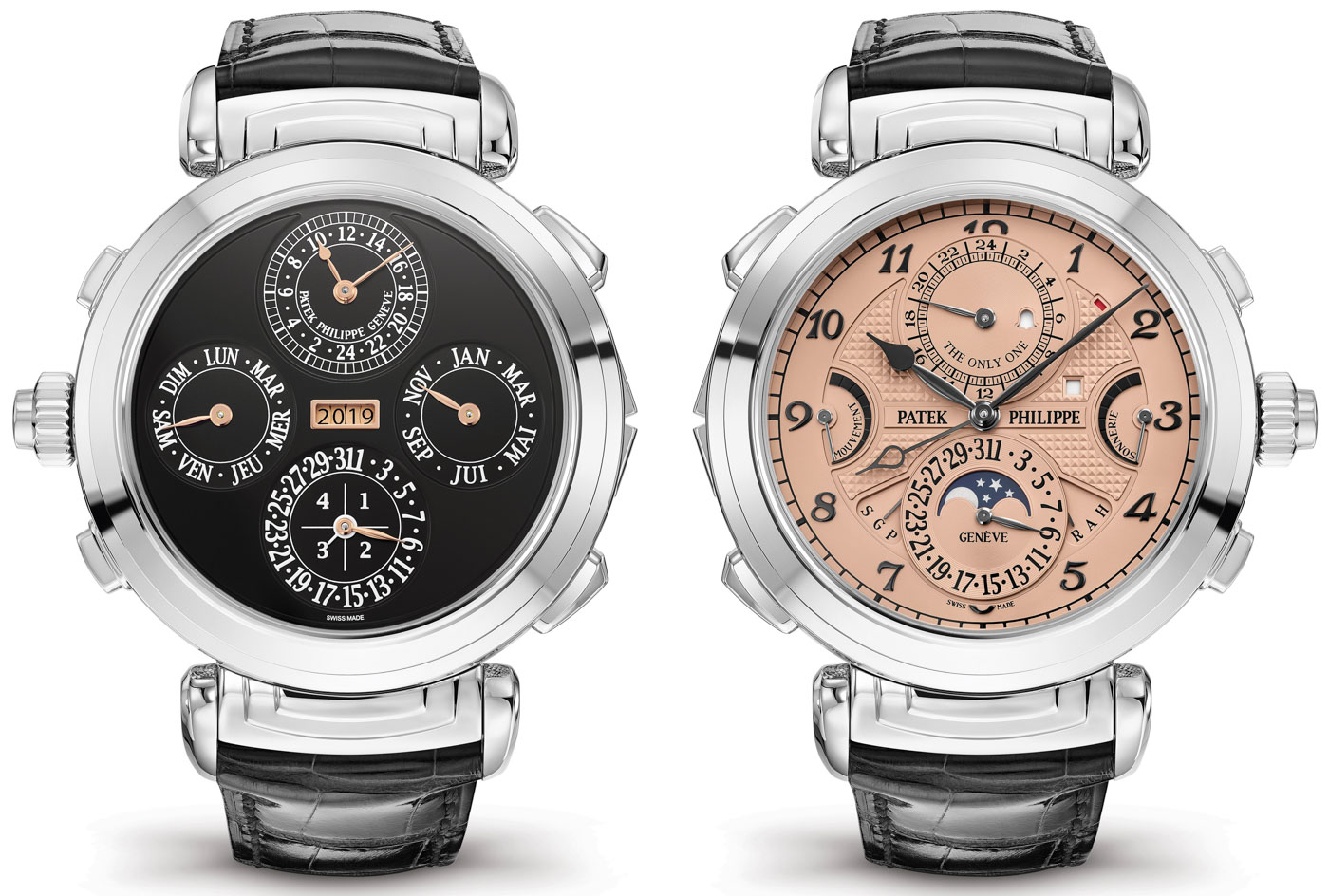 The Patek Philippe Grandmaster Chime ranks among the most complicated wristwatches ever created. Powered by the Patek Philippe Caliber 300 GS AL 36-750 QIS FUS IRM, a grand total of 1,366 pieces work in perfect harmony to make the 20 complications function to design. The 20 complications are displayed and adjusted through indications spread across not the usual one, but two complete dials. Therefore, the Patek Philippe Grandmaster Chime has a swiveling case, allowing the wearer to wear it with either side of the case facing towards him.

What renders the Only Watch 2019 version of the Patek Philippe Grandmaster Chime 6300A-010 so special is the “A” designation its reference: “A” in Patek-speak refers to “acier” or steel, making this the only steel-cased Grandmaster Chime ever made. The bidding war resulted in a hefty $31,194,370 tax write-off for the winner, along with a watch that now stands as the most expensive timepiece ever sold.

Antiquorum.com Holds Auctions For Rare And Valuable Watches: Worth It For The Pictures