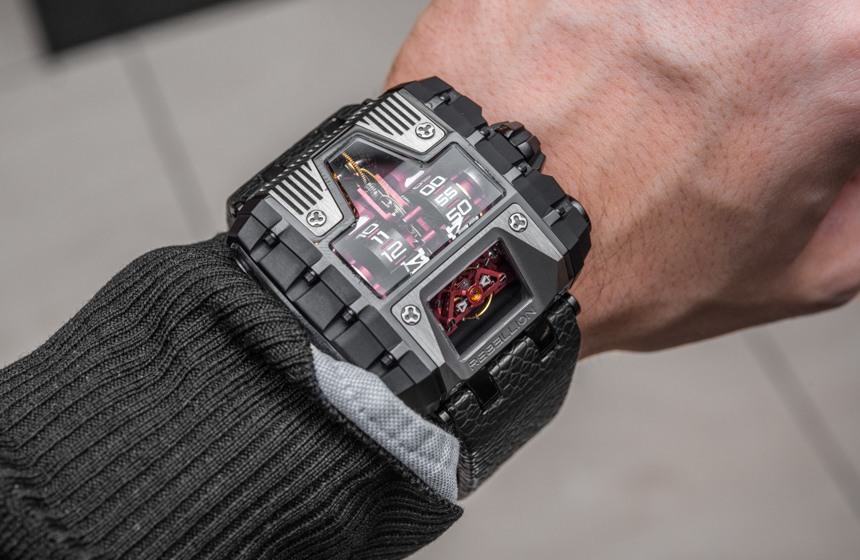 The Rebellion T-1000 is a watch (?) that has been around for a couple of years now, but it only happened earlier this year that I finally had the pleasure of seeing it in the… whatever this is made of. Because the Rebellion T-1000 – as if it weren’t obvious at first sight – is not like your average rebellious timepiece. At 52.2 by 47.9 and 18.2 millimeters thick, it would hardly fit under the sleeves of a spacesuit – but then again, you are supposed to wear it where it is most visible; and where you don’t mind wearing something for over forty days. 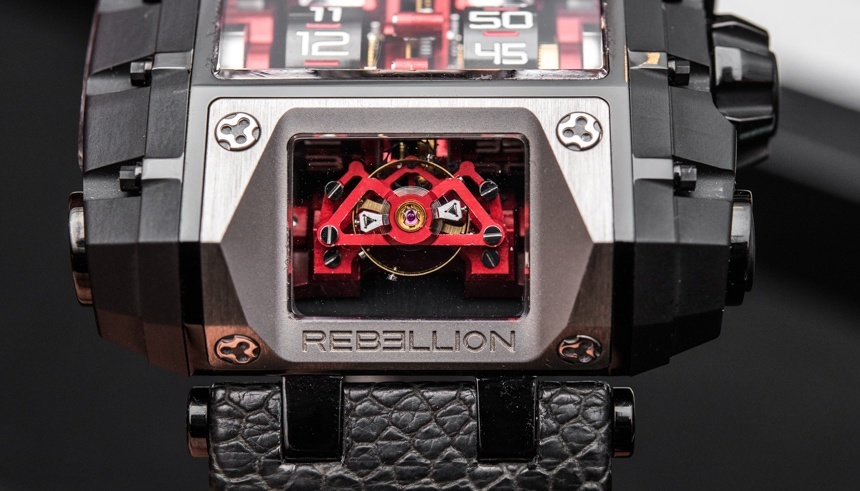 Yes, as the T-1000 name implies, the six (2×3) vertically aligned mainspring barrels inside supply a total of 1,000 hours of power reserve – which, at the time of its release, was the longest ever, albeit since then the Hublot MP-05 LaFerrari has claimed that title its own with 1,200 hours (50 days) of running power, thanks to its eleven barrels. 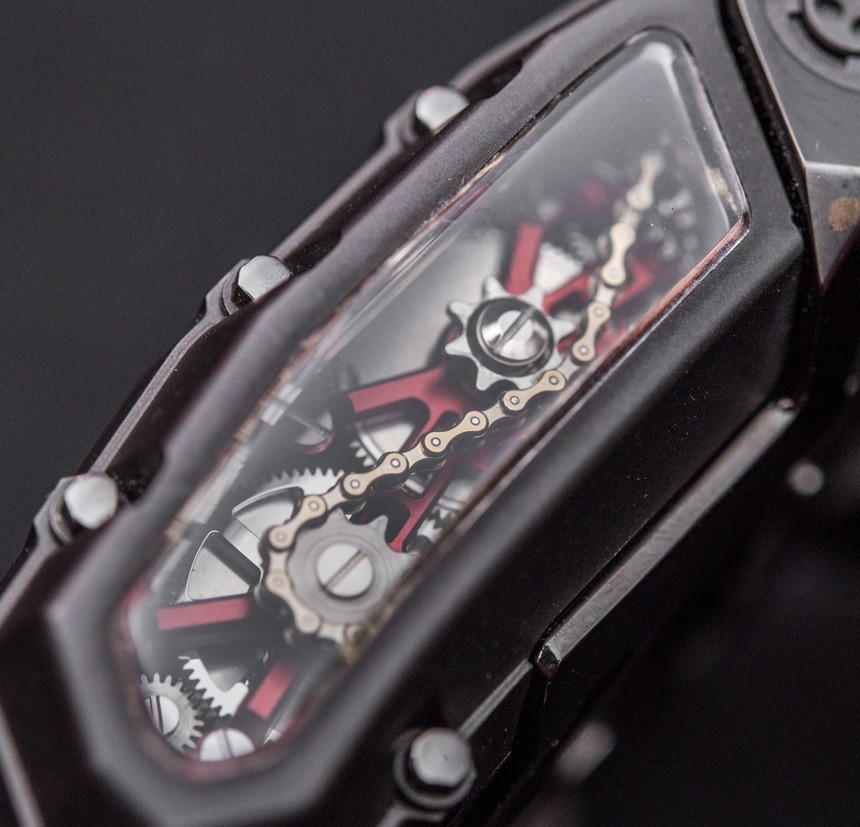 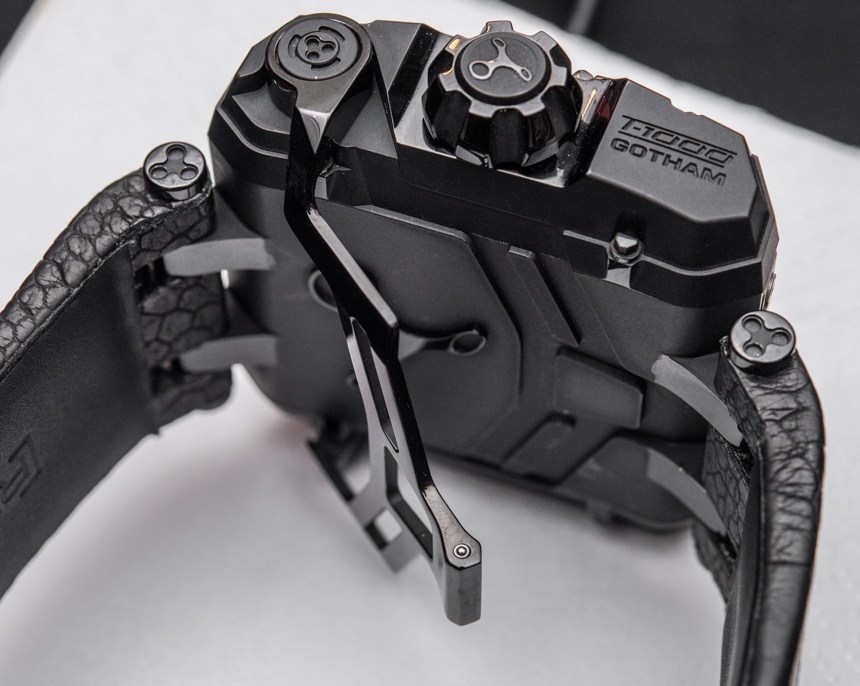 Winding up six barrels to forty days’ worth of reserve would be a (quite literally) painful experience, and just by the time the skin on your fingers had recovered from rotating the crown a million times, you could start again. Luckily, that problem has been solved by fitting the 693-component REB T-1000 movement (why can’t all brands have movement names that are as straight-forward as this?) with a lever that is fixed to the two sides of the case and fits into recessed areas on the case-back – on another version of the Rebellion T-1000, it is on the front and is recessed into the bezel area. 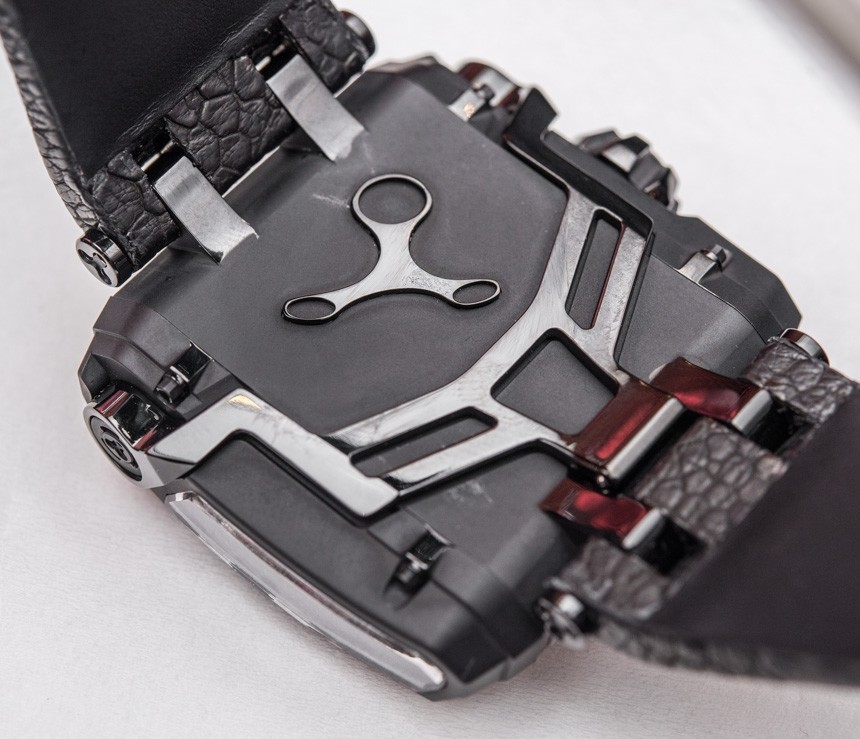 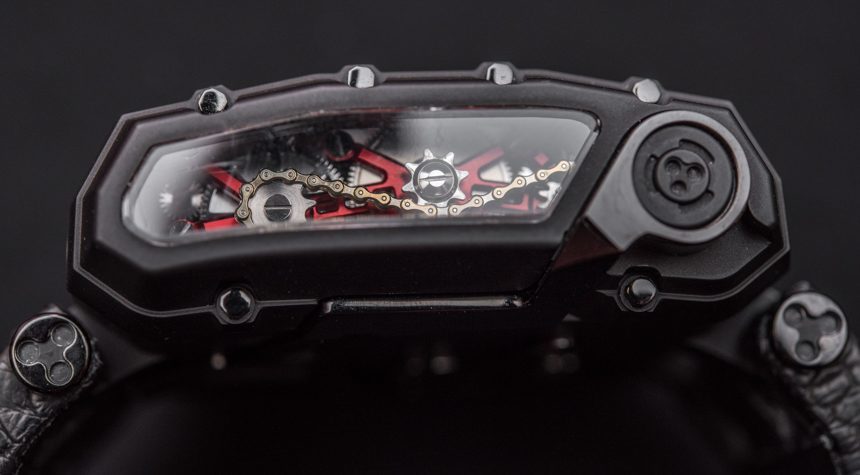 Running along the left side of the case is an angular sapphire crystal that provides a look into the inner workings of the movement, specifically the arrangement of three star-wheels, a miniature bicycle chain, and underneath them, three barrels. The components on top – although the chain may remind you of the fusee and chain mechanism seen in other watches – in this instance, are responsible for helping transfer the action of the winding lever towards the six barrels situated inside the movement, positioned vertically, with three on each side. 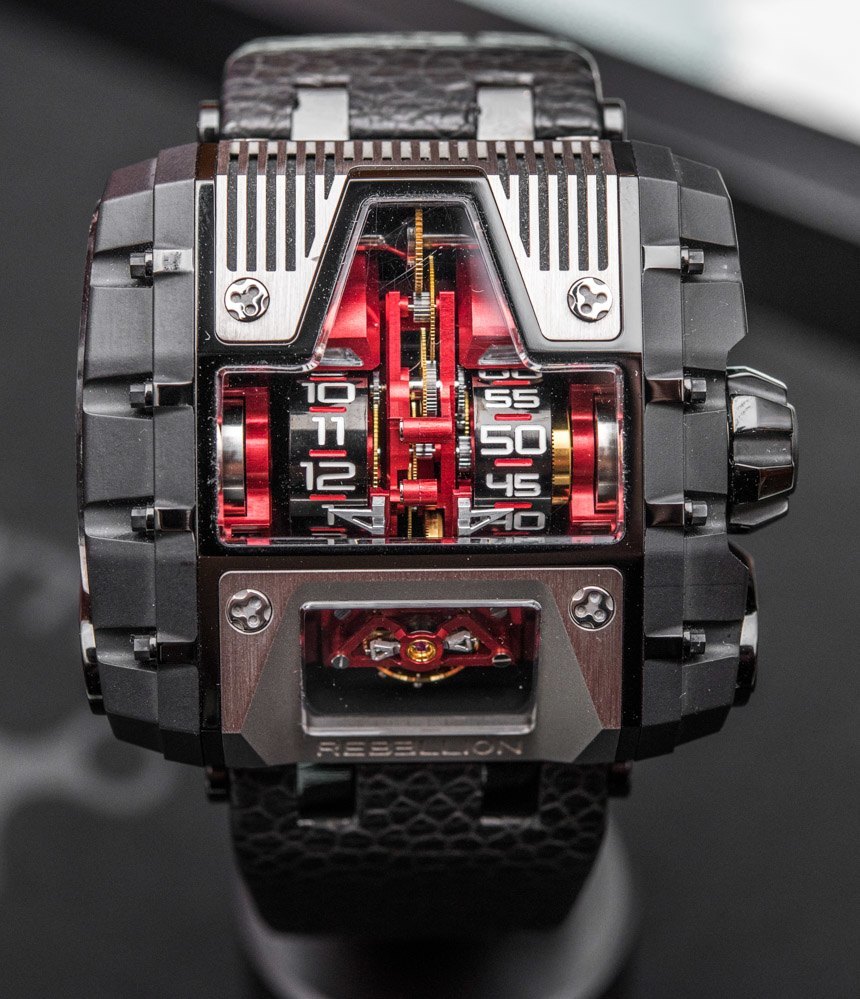 Speaking of a vertical arrangement, just about every single wheel in the movement is perpendicular to the mainplate – which explains why you can’t really see any wheels in the image above, as you only see the gold parts from their thinner ends. One larger and one smaller sapphire crystal on the top and front of the watch allows for a look deep into the watch, and because of the layout of the wheels – as they are not laying flat on a plate but are “standing up” – the depth of the caliber is much more perceptible than on most other watches. 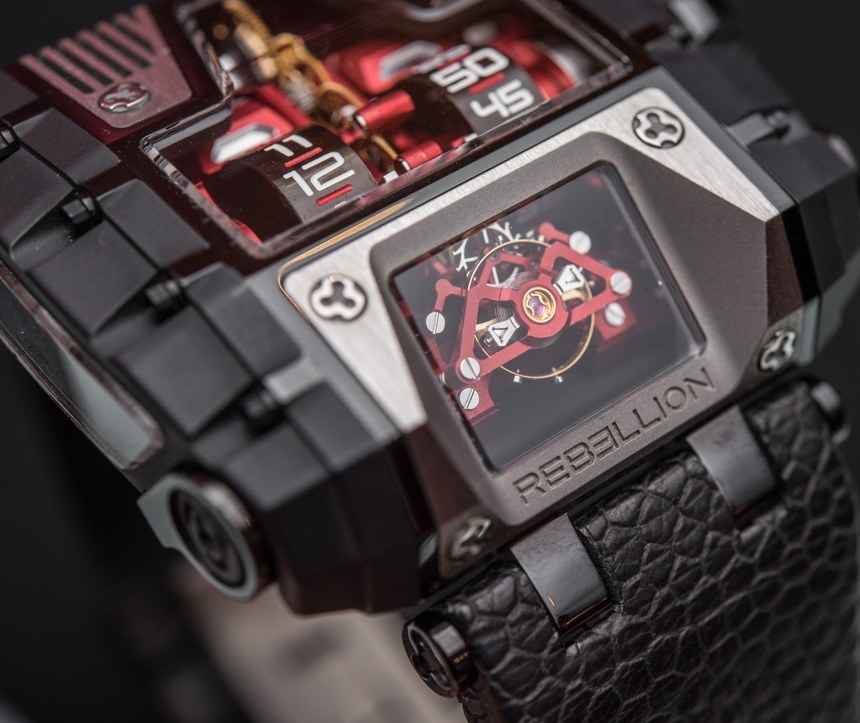 Those familiar with his work will not be surprised to hear that the Rebellion T-1000 has been designed by one of today’s handful of top watch designers, Eric Giroud. Having seen a larger number of watches that were signed off by him, what really stands out to me in his work is his attention to detail. Whether he’s designing a restrained watch such as that from Badollet, as complicated as MB&F and Urwerk’s C3H5N309, or as nuts as the Rebellion T-1000, I find that in his designs the smaller details of the case and movement work together in a way that nothing looks out of place… Or, as you could argue when it comes to the Rebellion T-1000: everything looks out of place. 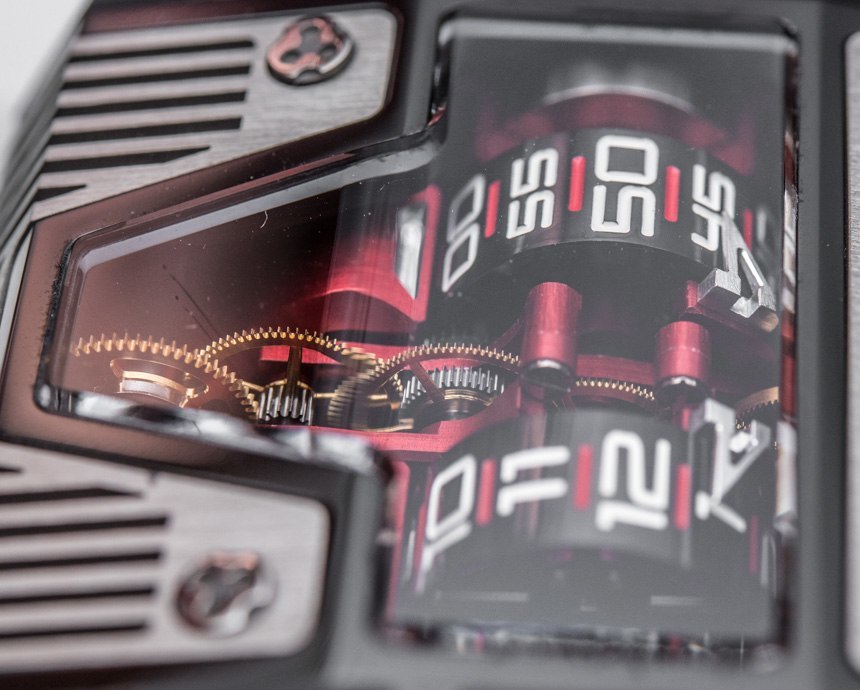 Time, because it is a watch after all, is displayed on two large rollers, with the numerals for both the hours and minutes having been laser etched and white painted onto rotating drums. Legibility should be relatively good thanks to the large numerals, though it is not at all easy to tell the time with to-the-minute accuracy… Not that you would care too much, as not only could the 1,000-hour power reserve have its ups and downs in torque delivery – affecting the time keeping accuracy quite a bit – but also because you are wearing a massive watch, inspired by the Batmobile. 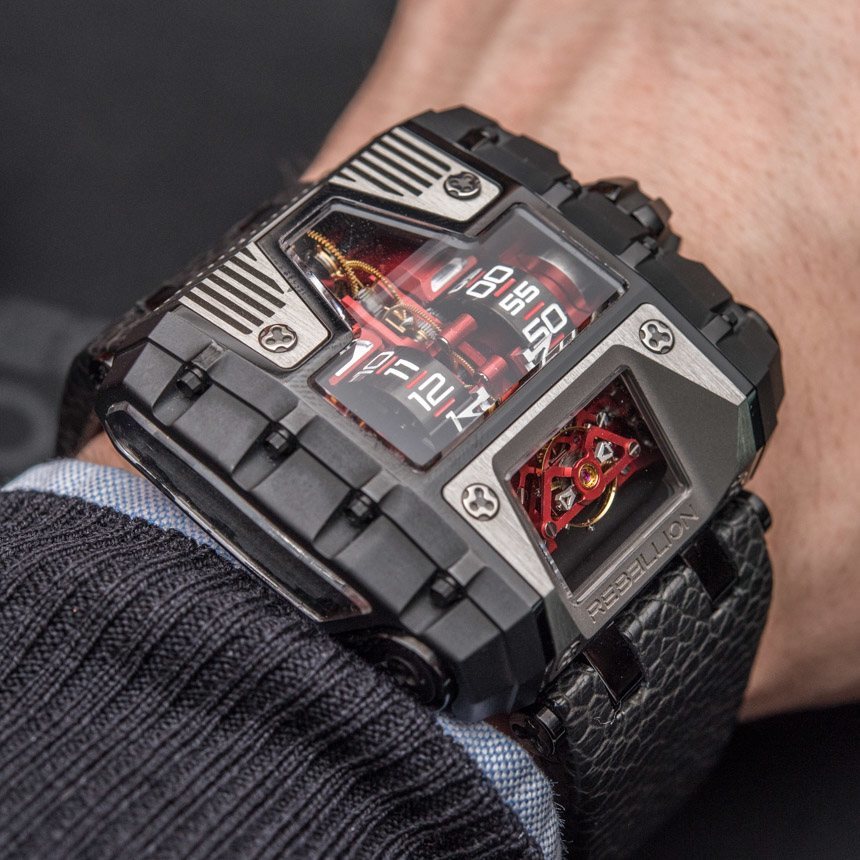 In bare and black DLC treated titanium, the Rebellion T-1000 Gotham is an awesome watch to behold. It’s so large and so complex-looking that it is as much of a sensory overload as a watch can possibly be. After putting it on, I tried to assess the damage: how much it extended beyond the edges of my wrist, how uncomfortable it was (that turned out to be quite the contrary, actually), how excessively sized and monstrously proportioned it all was.

But then, I gave up and rather just tried to – unsuccessfully – wipe the smile off my face, that this ridiculously amazing watch put on it. If you want a watch with some interesting engineering in its bowels and an exterior that shouts “I couldn’t care less,” well, this is it. Gotham, Godzilla, Sarah Jessica Parker… You could call it many things, but not one will match the frightening impression the Rebellion T-1000 Gotham makes. Price is around $140,000. Or $340,000. Or more. Does it really matter? rebellion-timepieces.com