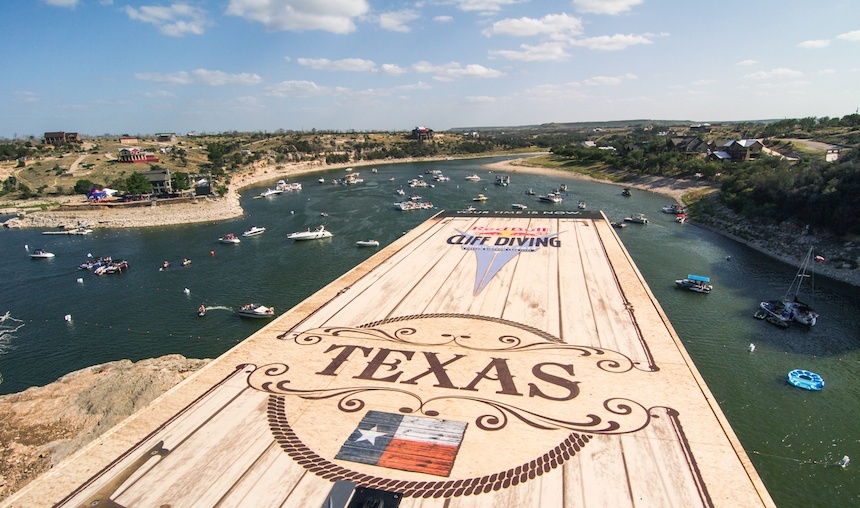 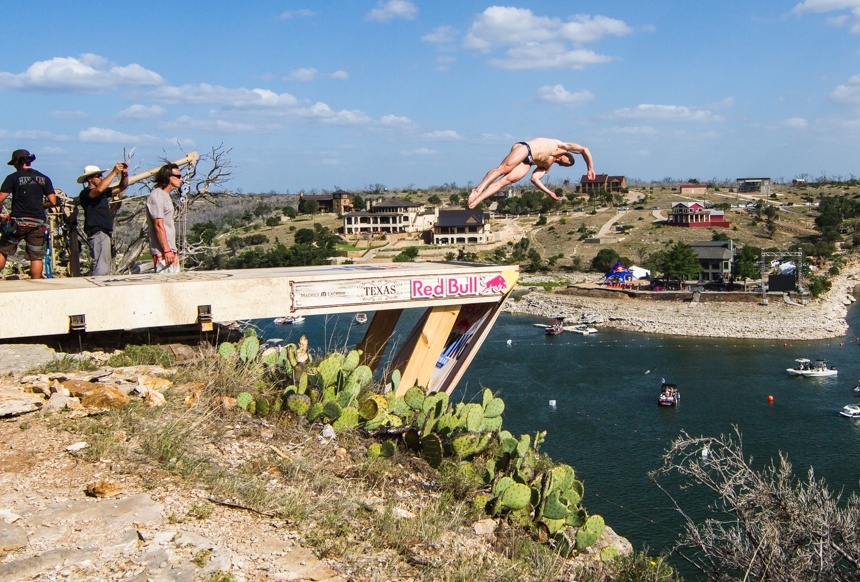 Eighty-nine feet up. I find myself perched atop a wood platform, baking in the Texas heat high above a lake a couple of hours west of Dallas. While I am relatively okay with heights, I seldom go out of my way to experience heights as any sort of challenge to my ego. I take a couple of steps forward and a slender man with long hair, an enviable tan, and a Red Bull backpack advises me to not go any further than the “Texas” logo on the platform. The reason? Insurance. Were I to jump, or perhaps more likely fall, from this plywood platform over Possum Kingdom Lake, I’d plummet for nearly 3 seconds while accelerating to 53 mph before crashing into the calm waters below, most certainly injured and likely unconscious.

I traveled from the temperate climes of the people’s republic of Vancouver, BC to experience a suitably outlandish event in the Lone Star state, the Red Bull Cliff Diving World Tour. My companion and partner-in-crime for the weekend is a cool-headed Oregonian named Andre who scored the trip by entering a contest sponsored by Maurice Lacroix. Andre actually posted a great comment on the ABTW contest post and even included a photo of him and his lady jumping off a cliff in Mexico. Lucky for me, Andre is an all-around good dude and a commensurate watch addict. 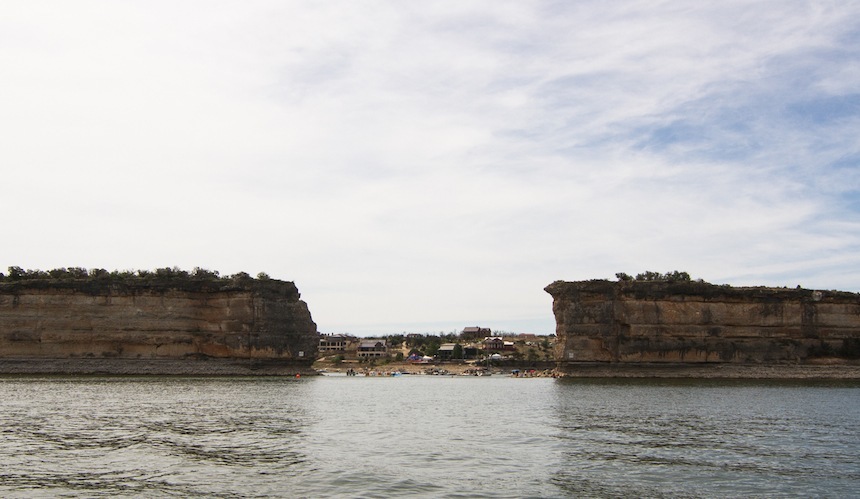 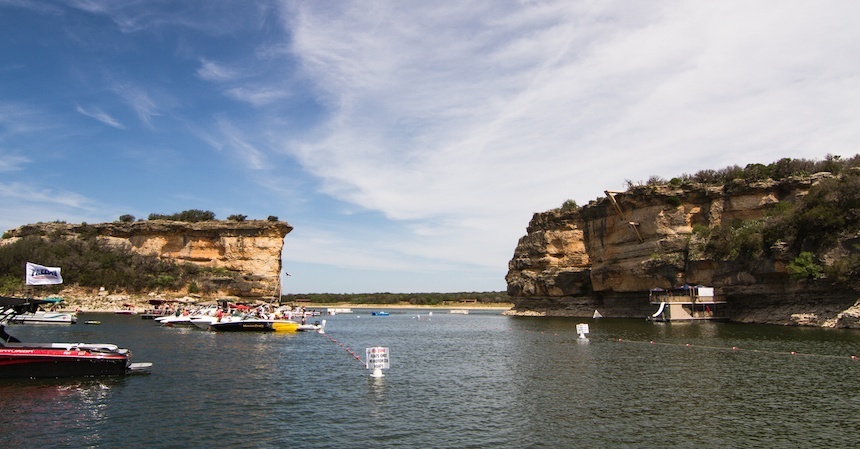 In addition to Andre and I, our party was a mix that included a few Maurice Lacroix employees, a couple of US retailers, an LA real estate guy and a collector with no fewer than three Maurice Lacroix pieces to his name.

With a such a small group, watch-spotting opportunities were limited but the group was sporting a bevy of MLs – from the new Pontos S Supercharged to a Pontos S Diver rocking a clean three-stripe NATO. There was some non-ML fare to be seen as well, including an old and well-loved steel Datejust, a Panerai Luminor and no fewer than two Casio Rangemans (with no prior communication, Andre and I brought the same watch – go figure). 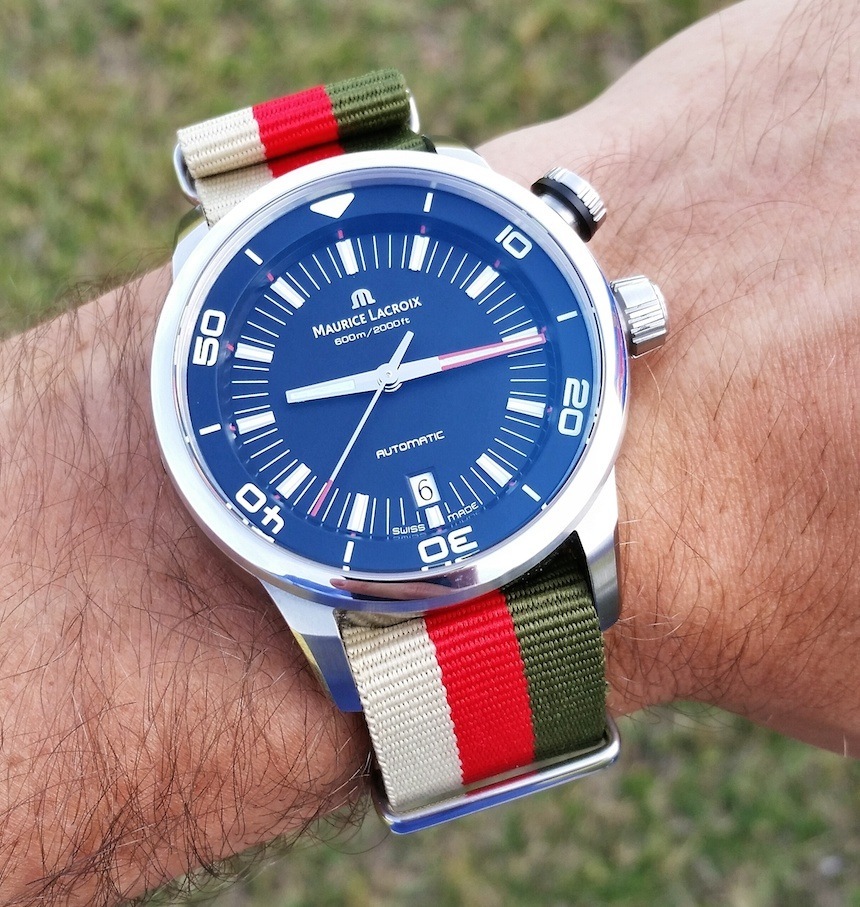 I was unprepared for the heat of the Texan sun. Our day began with a tour of Possum Kingdom lake aboard a party-style pontoon boat helmed by one Captain Mike. Captain Mike was a peculiar sort for a sailor, at times deeply aware of his surroundings while at others he seemed in a daze that left us wondering if we should be keeping closer watch on the boat’s well-stocked cooler. After an uneventful tour of the lake we came to pass Hell’s Gates, a pair of 100-foot cliffs created by a jetty on the edge of the lake and a matched formation borne of a small island. The inside of the small bay formed by the gates is host to the Texas stop of the Red Bull Cliff Diving World Tour, a world wide event that pits gravity against a small group of men and women as they hurl themselves from great heights under the banner of an Austrian energy drink with a Thai history and the promise of some much-needed wings.

The day was spent watching warm-up dives from sunny deck of the SS “Is Mike Gonna’ Hit That Other Boat?” or the refreshing waters of the surrounding lake. From the surface of the water the divers appear suicidal, and later when I stood on the same platform, the impression was all but confirmed. You could jump, said that little voice in my head. While the structure of diving may be simple, the sport is fairly complex. Red Bull takes a sport that the Olympics operates at 33 feet and pushes it to a max of 92 feet (66 feet for the women). They have taken a construct that we all understand and applied the typical Red Bull philosophy of identifying the edge of the sport’s possibility and then collecting athletes willing to leap into the unknown. 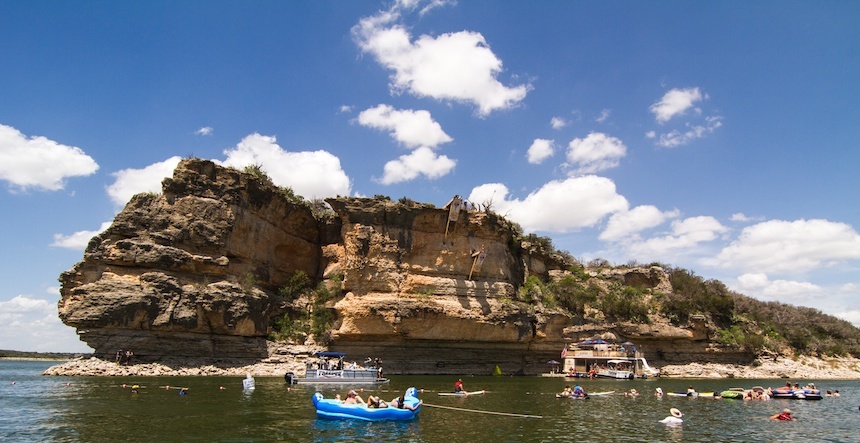 For those doubting the risk to the divers, I’ll share a quick quote from the Red Bull Cliff Diving literature – “A pancake landing from such heights can be compared with a hard landing from 43 feet on concrete.” The impact that the male divers experience when they enter the water is some nine times harder than that of a 10M jump. I’ve jumped from a 10M board and I would describe the part where my flailing body hit the water as decidedly noticeable, if a bit uncomfortable. Multiplying that impact by nine times would put it somewhere in the “car accident” range of damage for someone who didn’t know what they were doing (yo). Even with their training and elite skills, the divers still experience pain and extended soreness in the days following the events.

Later in the day, we were ferried over to the islands edge and began the short hike up to the men’s diving area. The winding path was lined with all sorts of pointy plants and sharp rocks, just the sort of environment that must feel wholly uninviting to those clad only in a tiny speedo. Nevertheless, we trudged our more modestly-clothed bodies up to the top of Hell’s Gate and looked down on the bay below. The boats are toy-sized from this height, and any of the bravado that was present at the water’s edge is quickly replaced by widening eyes and cautious footsteps.

From the world below, you smile as a diver walks to the edge of the platform, prepares for a dive and leaps into a wild spin before cutting like a knife into the water. From the top, your view of the same action is muted by the buffeting of what seems like a dangerously strong wind and the full view that a 90-foot vantage point allows. As no diver wishes to tempt injury on a practice dive the day before the event, they each approach the day’s final dives with some caution. Not a normal person’s level of caution, mind you. They still jump.

While the silent grace of a dive is really something to behold as I watch diver after diver disappear behind a small growth of thorny cactus on the cliffs edge, it is Czech diver Michal Navratil that really manages to elicit a response. He approaches the platform’s edge with a series of staccato movements and motions as he amps himself and the crowd up for his jump (see above video). Once appropriately pumped, Michal turns his back to the nothingness behind him, places his hands on the platform and slowly rises into a handstand. The sort of handstand that I assume everyone with 5% body fat does whenever they want. After a short pause, Michal popped off the platform and fell out of view. From the top of the cliff looking at the shrunken world below, I held my breath until he disappeared from sight. I only knew for certain that he was okay because I saw him at the hotel later that evening.

With a better appreciation for just how athletic/dangerous/crazy this event really is, I find myself in a shuttle back to our lodgings, considering Maurice Lacroix’s involvement as the Official Watch Partner for the Cliff Diving World Tour. Maurice Lacroix is a successful brand with a strong value statement and a number of really great watches, but I knew that before I knew of the existence of Red Bull Cliff Diving and the two seem like fairly disparate entities. There is no timing element to the dives and indeed the divers that are ambassadors for Maurice Lacroix (David Colturi, Artem Silchenko and Orlando Duque) do not wear their watches, Pontos S Extremes, while diving. So… why? 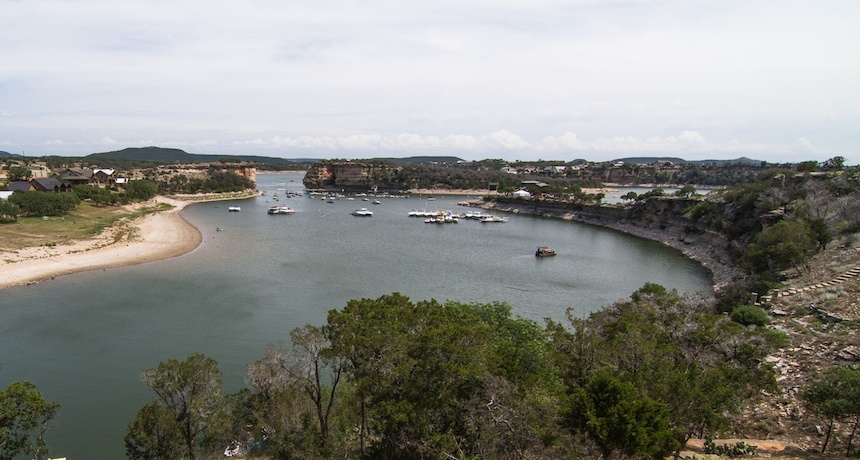 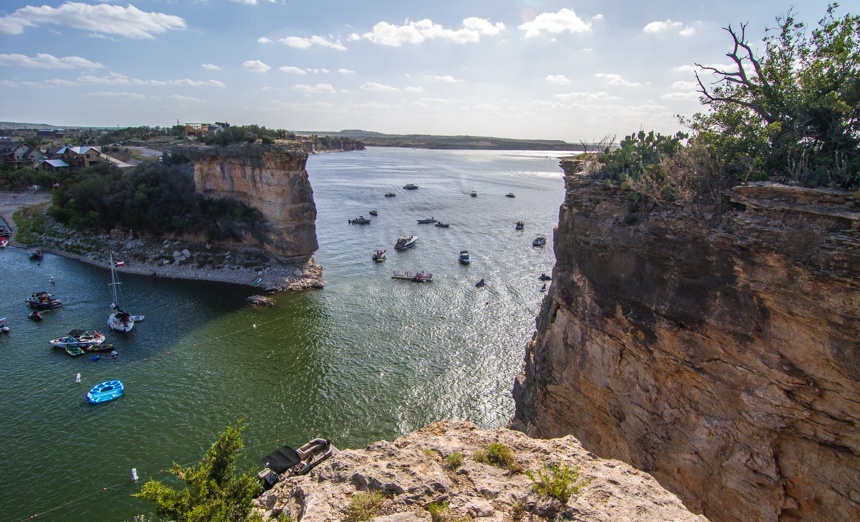 Watch brand sponsorships can seem puzzling but they are generally much more simple than you might think, if a bit abstract. Brands want to create connections with endeavors, events and people that might mirror their own philosophies and foster some shared coolness. It’s not always about a functional or practical connection. Consider Beyonce and Pepsi or Blackberry and the Petronas F1 team. While I’d wager that most watch nerds could explain what makes the Pontos S Extreme an interesting and cool watch, cliff diving doesn’t require that sort of an explanation.

It’s an extreme sport that demands huge amounts of training, expertise, accuracy and talent. To put it more simply, at it’s core, cliff diving is Beyonce – spectacle, exceptional talent, aesthetic execution, and a world tour. Just as people and brands want to be involved with Beyonce, they want to be involved with Red Bull and that is why I think the Red Bull Cliff Diving partnership works for Maurice Lacroix and forms an effective connection for models like the Pontos S Extreme. 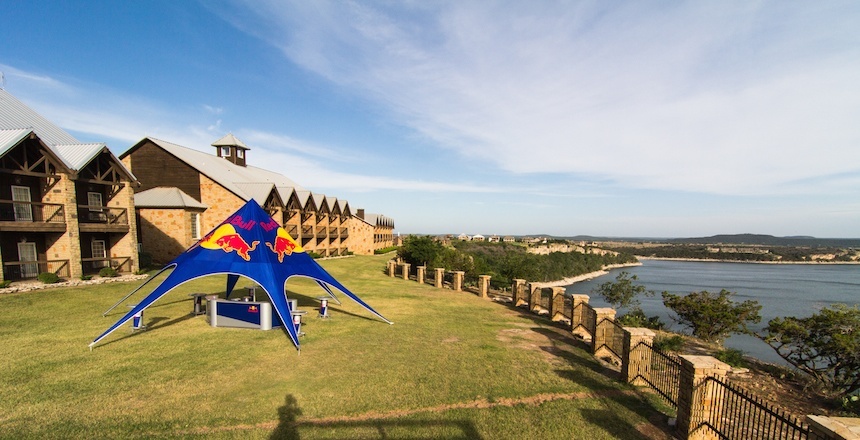 These sorts of events come in all shapes and sizes and the amount to which they directly feature watches varies greatly. As a watchnerd-turned-writer, the fringe benefit of these events is that I’m usually guaranteed a solid weekend of chatting about watches. Much to my pleasure, the assembled group was happy to talk watches, with Andre and I pushing the “ad nauseam” threshold.

For his age, Andre has owned an impressive list of high profile watches. His outlook on the hobby of watch collecting seemed to place more value in experiencing great watches rather than amassing that perfect collection. From Doxa to Rolex and Citizen to Casio, Andre is in it for the fun of wearing great watches and I can’t imagine him beating the addiction any time soon. Respect.

The balance of our stay at Possum Lake was spent attempting to to find respite from the heat while watching Saturday’s final dives. After the podium, where Maurice Lacroix ambassador Artem Silchenko took second place, the entire circus is torn down, packed up and sent on to the next stop on the tour, Serpent’s Layer at Inis Mor, Ireland. The seven-stop tour will circle the globe and push the divers to conquer some of the worlds most suicidal-looking cliffs. 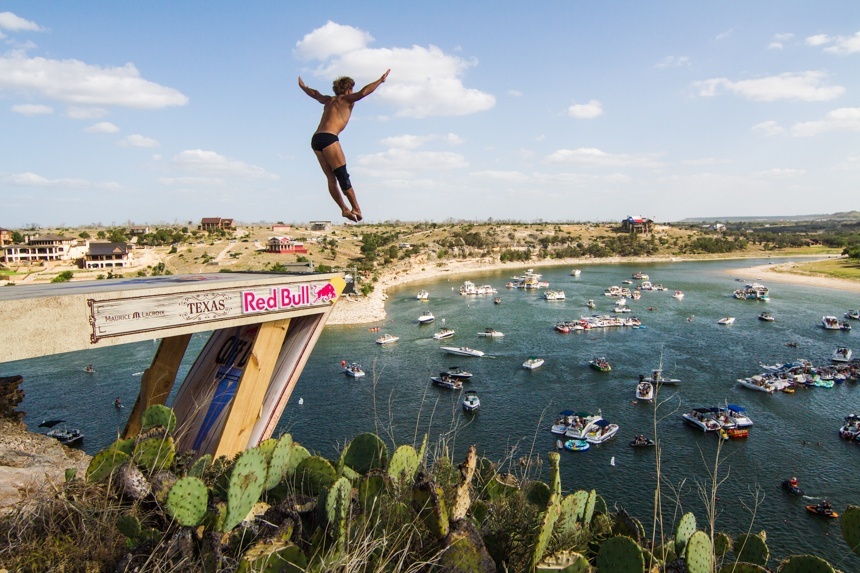 Like that fateful moment when the Red Bull buzz inevitably wears off, I find myself on a bus back to Dallas with a collection of Red Bull staff and even a couple divers. Some are sleeping, some, like me, are just quietly watching the passing sun-dried scenery. With clichéd sentiments for this very paragraph already forming in my caffeine-addled mind, I try to get some sleep. Something about life, highs and lows, and not being afraid to jump – unless it’s really really high. Mauricelacroix.com

Thanks to Lydia, Tim, and the whole team at Maurice Lacroix for sharing this event with aBlogtoWatch and for offering the opportunity to experience it first hand to one of our readers. Thanks for the company Andre! It was great to meet you.
Advertising Message