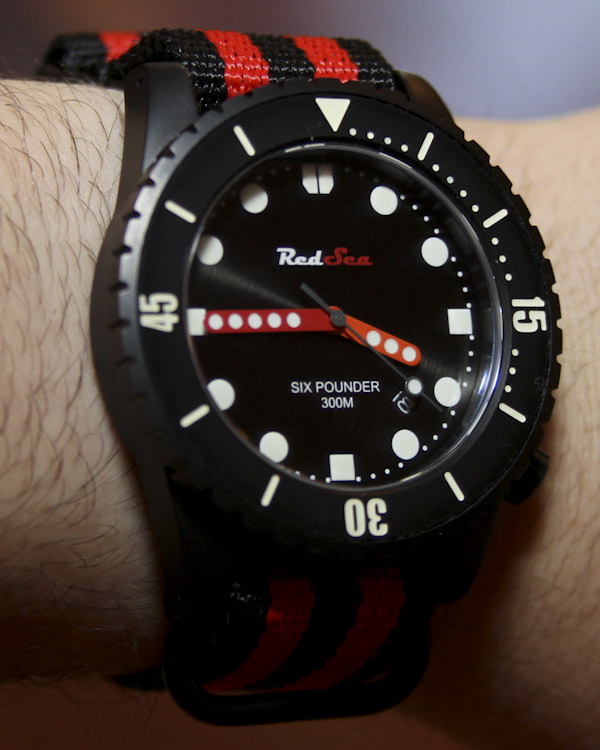 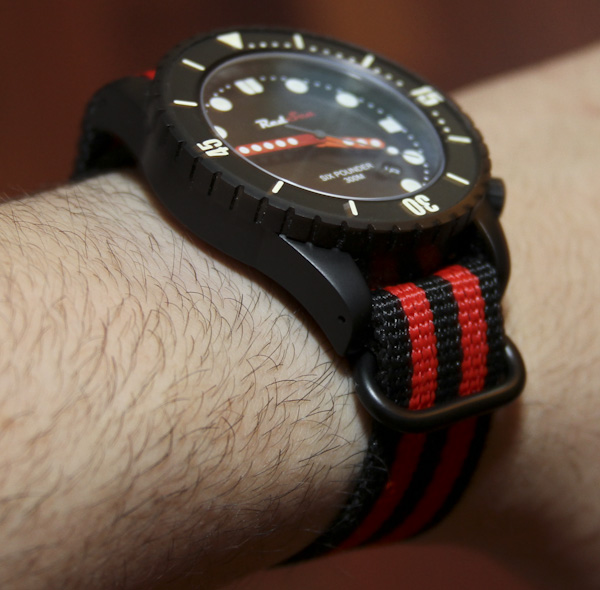 For example, the luminant on their watches comes from Ohio-based LUM-TEC – who makes “MDV” lume. Right now RedSea has two watch models called the Holystone and Six Pounder – so here is my review of the latter.

I can easily say that what RedSea offers impresses me. The price is right, the designs are fun, and they are cool to wear. There is a playful quality to the designs that is certainly masculine but also lighthearted. The difference between the two models is just the dials and hands. The case finishing might be different as well between the two. Each of the models are limited editions I believe, but as you can tell the version I am reviewing is a piece unique given a custom caseback. Now that is pretty cool. 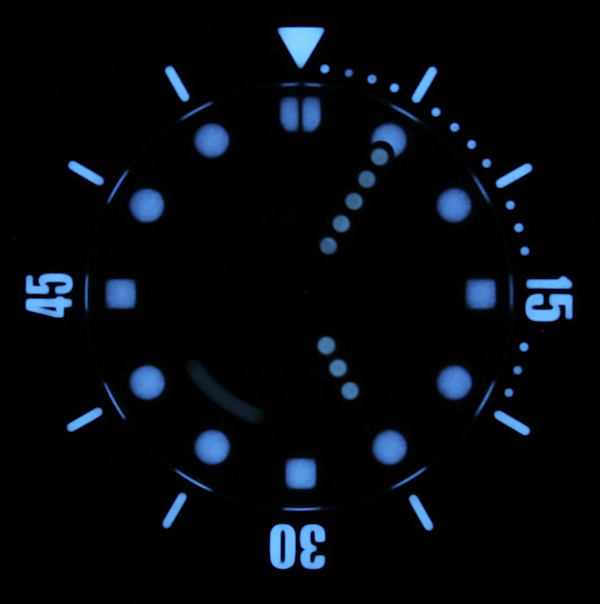 The image engraved on the back of the watch is really indicative of the piece’s personality. As a pirate-themed brand, you can see RedSea’s rendition of the skull and cross bones which is a diver’s helm and swords. I would love to see a pirate wearing a diving helmet. Halloween idea coming to me now… undead zombie pirate diver. Yes!

Six Pounder is another name for cannon balls – which may or may not have been six pounds. The diving style case is 44mm wide and 14mm thick, but it does not wear too big. A lot of that has to do with the thick rotating bezel – which makes the dial look smaller than it is. The steel case also comes in a matte black PVD finish – which looks great with bezel and dial. 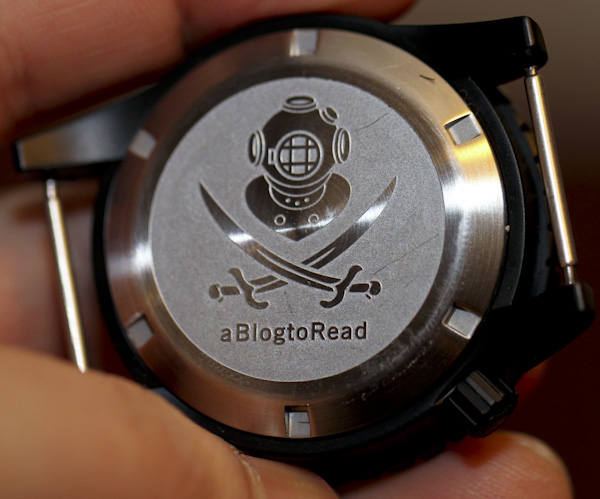 The dial itself is very legible. I was not sure about the design of the hands when I first saw the watch a while ago. I thought that they might be strange to look at and read. Fortunately I was wrong, as the unique looking hands not only grew on me, but also proved easy to read. The spots on the hands are lume filled. As you can tell in the luminant used is blue – fitting with the trend of many modern divers that have passed up the traditional green lume for blue.

As a 300 meter diver the watch has a sapphire crystal and screw-down crown (placed at 4 o’clock). Even as a new brand RedSea got a lot of the little details correct. This includes a relatively refined dial and a black date disc to match the face. Feeling like a high quality watch, the only thing I would recommend is to see how they can improve the look of the bezel. This is nit-picky, but the bezel, while looking very nice, makes it clear that the ring is an insert. Most bezel rings are inserts, but the difference in plane levels between the outer bezel and the ring sort of disrupts the illusion. Really a tiny thing.

On the wrist the Six Pounder is certainly comfortable. It is a nice mix between medium and large in size, and it is quite legible to read. The bold black and red colors are fun, not right for all occasions, but still cool. Inside the Six Pounder and Holystone watches are Japanese Miyota 9015 automatic movements – which perform similarly to ETA 2824 movements. People might prefer a Swiss movements, but for the sub-$1000 price I am happy with the components. Price for the RedSea Six Pounder in steel is $665, and with the PVD black coating it is $695 – each available on RedSea’s website.