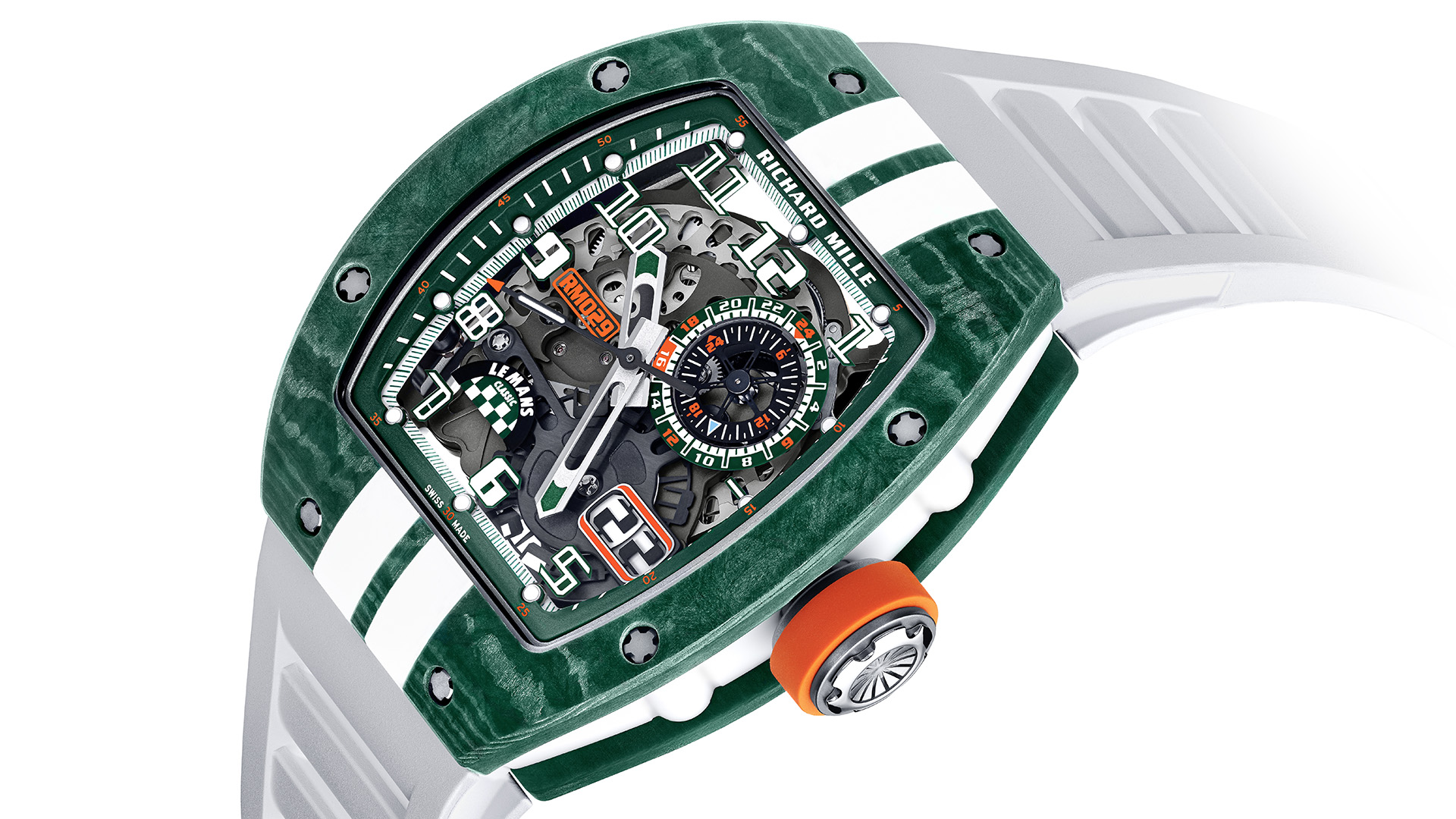 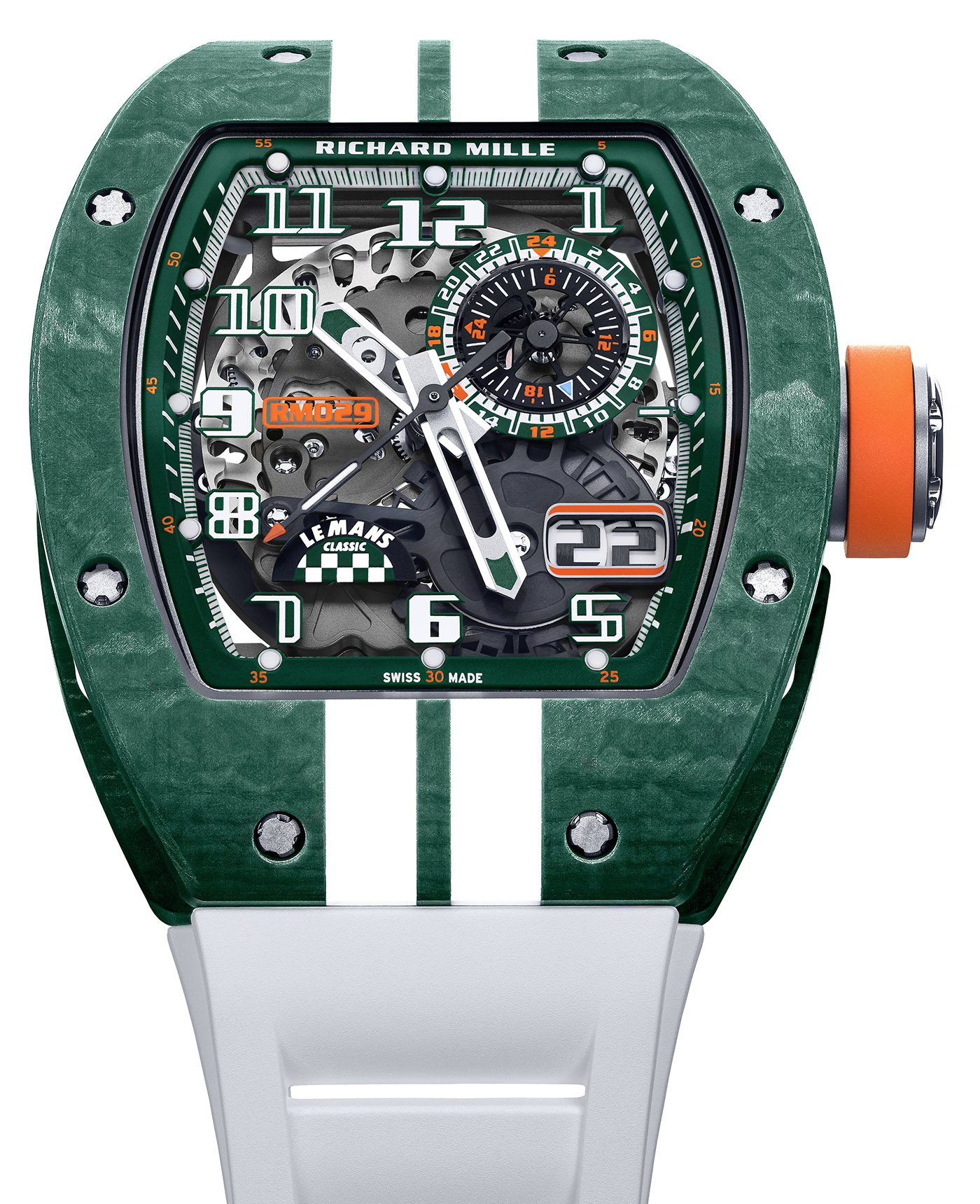 By and large, vintage racing can be less a true motorsport than a parade, with wealthy car collectors delicately marching priceless classic race cars around a circuit at low speed for fear of damaging a one-of-a-kind museum piece. The biennial Le Mans Classic at the world-famous Circuit de la Sarthe in Le Mans, France is no such event. Over 24 hours, this event brings over 700 of the world’s most historic endurance racing cars from the likes of Bugatti, Ferrari, Bentley, BMW, and Porsche together in a snarling, full-throttle competition on one of the world’s fastest and most treacherous circuits. Open to cars that competed at the 24 Hours of Le Mans between 1923 and 2013, the event attracts top-flight racing drivers from around the globe to compete at true race pace and brings in over 135,000 spectators. Haute horlogerie brand Richard Mille has been closely aligned with the Le Mans Classic since the first running of the event in 2002, and in anticipation of the upcoming race in July 2022 and the special centennial running to celebrate 100 years of the 24 Hours of Le Mans in 2023, the brand has announced a striking new commemorative limited edition watch. With a sporting green and white case design in homage to the logo of the Le Mans Classic and special nods to the event built into the movement complications, the new limited-edition Richard Mille RM 029 Le Mans Classic is a striking ultramodern luxury homage to one of the world’s great showcases of vintage speed. 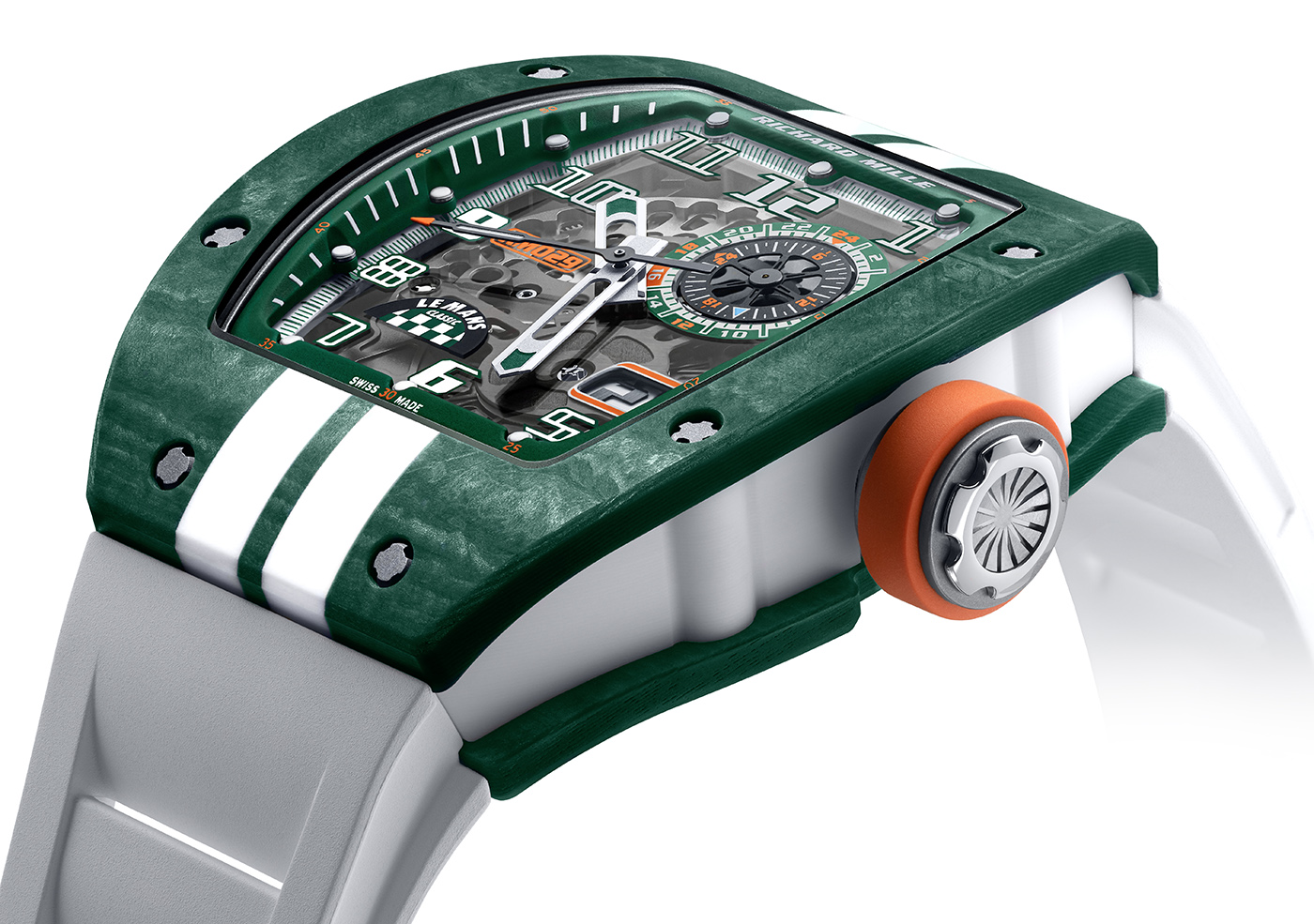 Measuring in at 40.1mm by 48.15mm, the case of the Richard Mille RM 029 Le Mans Classic takes on the brand’s signature streamlined and layered tonneau form. While the shape should be familiar to the brand faithful, the RM 029 Le Mans Classic takes the design in a sporting new direction with the use of the brand’s proprietary layered Quartz TPT material in both deep British Racing Green and stark white. Created by stacking hundreds of layers of microscopically thin silica fibers with a random interweaving pattern before baking the stack in an autoclave and subsequently machining the resulting material. This machining reveals a randomly striated damascene pattern in the final product. As with most Richard Mille cases, this is a sandwich design, with a white central case structure in between a separate bezel and caseback in green. For the bezel here, however, the brand introduces its first-ever inlaid racing stripe design, achieved by bonding separate pieces of white Quartz TPT to the green main bezel structure. The effect is unique and undeniably striking in images, but this bonded-piece approach may potentially create a structural weak point in the case. The 3 o’clock crown adds some vibrant contrast to the mix, courtesy of a grip ring in blazing signal orange. While the overall look is ultramodern and race-ready, slickly incorporating the Le Mans Classic’s green and white event color scheme, as with many Richard Mille designs, water-resistance remains an Achilles heel here. The brand rates this watch at a mediocre 50 meters of resistance. 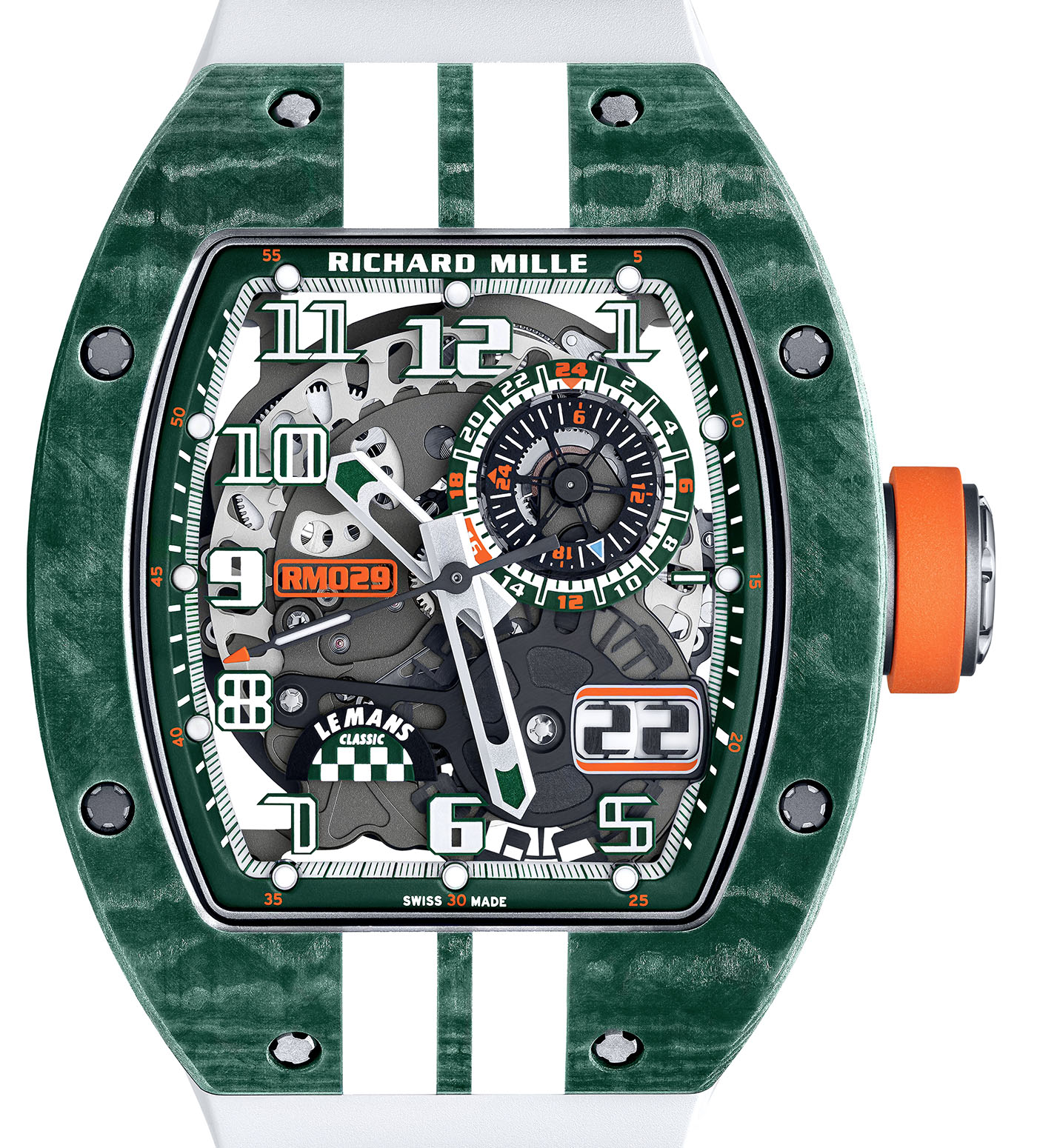 Like most Richard Mille designs, the RM 029 Le Mans Classic appears to use an intricate and complex skeleton dial design. On closer inspection, however, the thin sapphire dial surface reveals itself, allowing elements like the aggressive green and white printed Arabic numerals to float above the skeletonized movement in images. The design takes on classic Richard Mille hallmarks like a skeletonized big date display at 4 o’clock and bold skeletonized baton hands, interpreting these trademark elements in a sporty green, white, and orange colorway. The true centerpiece of the dial design, however, is the 24 hour subdial at 2 o’clock. Rather than a traditional hand and index layout, the RM 029 Le Mans Classic’s subdial display uses both an outer ring and a skeletonized disk hand, each with its own full 24-hour scale. The static outer 24-hour ring forms the standard index, while the blue triangle on the disk hand indicates the current time. Interestingly, this blue marker does not correspond to midnight on the hand’s own 24-hour scale, instead lining up with 4 o’clock PM as a clever reference to the traditional starting time for both the Le Mans Classic and the 24 Hours of Le Mans. Once a wearer is acclimated to the unorthodox alignment, this also allows the display to be used as a countdown timer for the race itself. While the blue triangle pointing to the current time on the outer 24-hour scale, the 24-hour marker on the outer scale will point to the current time left in the iconic 24-hour race. While perhaps not the most practical complication outside of scheduling driver changes in the pits at the Circuit de la Sarthe, this is a playful and detailed nod to the most important starting time in endurance racing. Richard Mille includes a more overt nod to the event at 7 o’clock, where a printed version of the Le Mans Classic logo pays homage to the evocative shape of the Dunlop Bridge at the circuit. 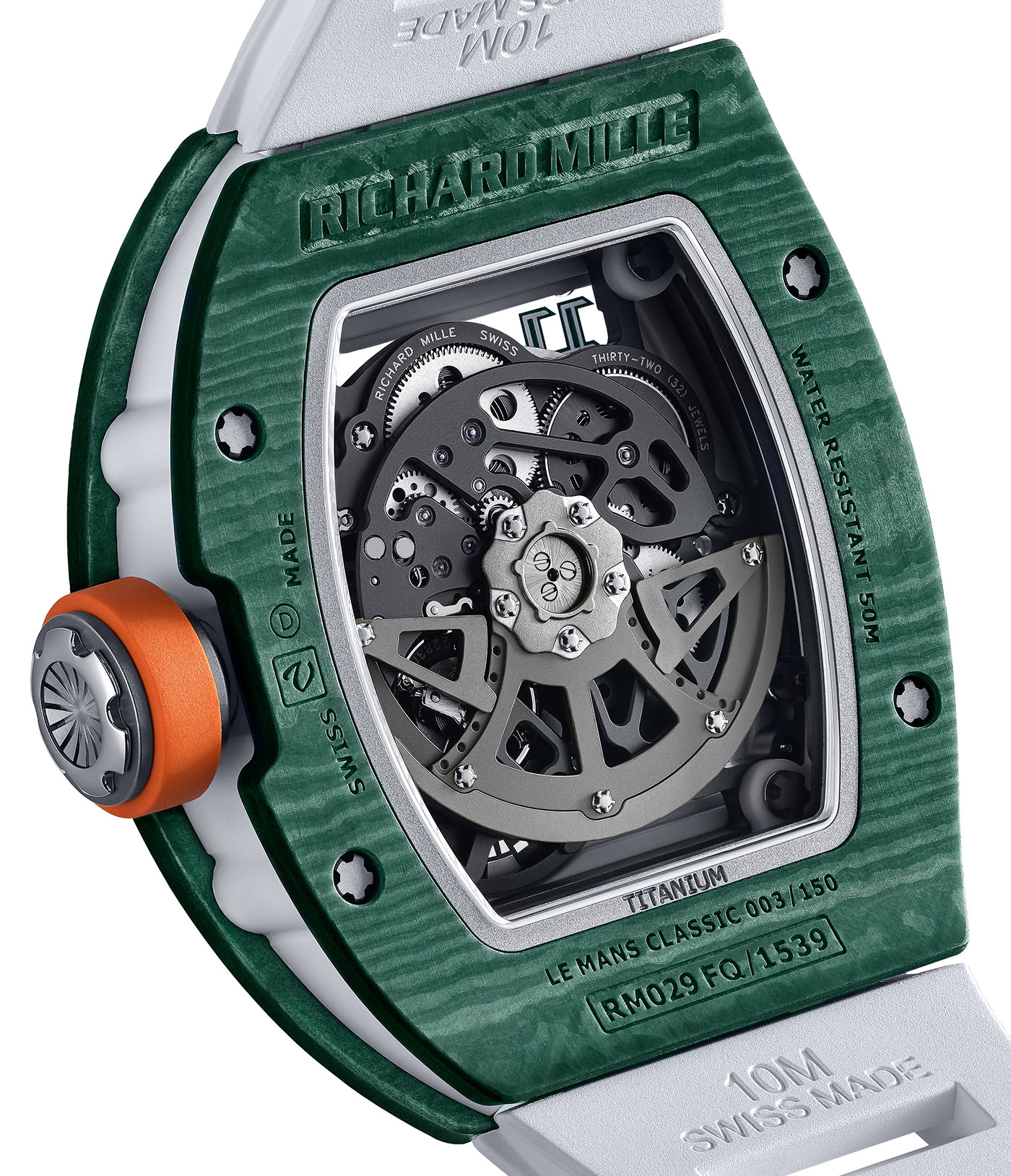 Richard Mille powers the RM 029 Le Mans Classic with the in-house Calibre RMAS7 automatic skeleton movement. The Grade 5 titanium bridges, baseplate, and balance cock of the Calibre RMAS7 are finished in an aggressive, modernist blend of black PVD and bead blasting. The forms of these elements themselves are suitably complex and automotive, with elements evoking the look of racing suspensions, clutch plates, and vented brake rotors in various places. The high-tech look of the Calibre RMAS7 is more than skin deep, and the movement boasts advanced components including a free-sprung Gluycdur balance with variable inertia and a variable geometry winding rotor that can be adjusted to the wearer’s level of physical activity to avoid excess strain on the winding mechanism. Thanks to twin mainspring barrels, power reserve performance is also well above average, with Richard Mille claiming 55 hours of reserve at a 28,800 bph beat rate. Richard Mille finishes the RM 029 Le Mans Classic with a vented variant of its tapering structured rubber strap in white, flowing seamlessly into the lugless case and adding a bold contrast to the green bezel and caseback in images.

With a bold, dynamic design that celebrates the brand’s ongoing partnership with the Le Mans Classic while adding subtle tributes to the history of the event, the limited-edition Richard Mille RM 029 Le Mans Classic offers an advanced ultramodern complement to the event’s historic competitors on track. Only 150 examples of the Richard Mille RM 029 Le Mans Classic will be made. The watch is available now through authorized dealers at an MSRP of $176,000. For more details, please visit the brand’s website.