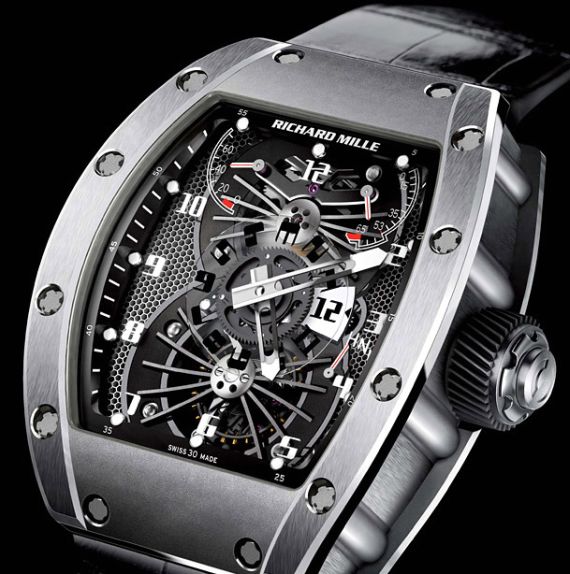 You might want to consult with your horologist about your current levels of Orthorhombic titanium aluminides. They might be dangerously low, or even, “gasp” not present. If you are Orthorhombic titanium aluminides deficient, not to worry. Richard Mille’s new RM022 Aerodyne Dual Time Zone watch has got JUST what you need. Up from the RM021 watch, the Areodyne’s gotten fancier. The tonneau shaped case in titanium holds many secrets and complexities. Richard Mille has the crown these days for watches that make you feel like there is an impossible amount of stuff going on inside of the cases.The RM022 is about 40mm wide and 48mm tall. The case is in titanium, or 18 white or red gold. All versions come with alligator straps and matching buckles. 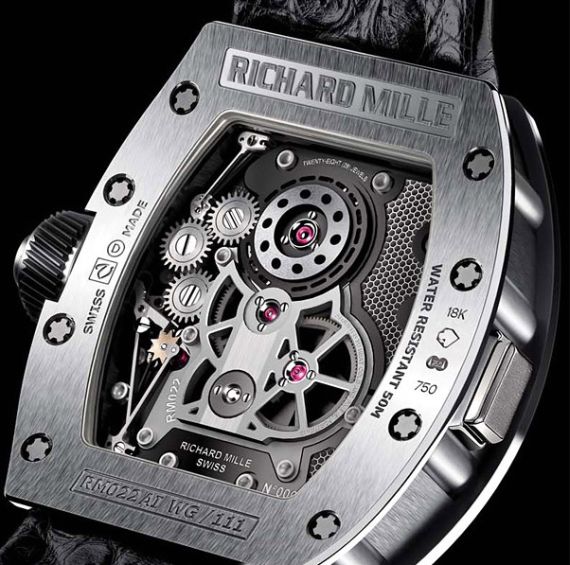 The watch is less of a timepiece per say than a tour de force of the movement. Visible through the front and rear of the watch, the manually wound caliber is beguiling made out of a number of fancy materials – including… Orthorhombic titanium aluminides! The spacey alloy is what makes up the honeycomb pattern plates on the movement and was originally developed for aerospace purposes (of course!). The Caliber RM022 is where all the action is. The tourbillon based movement does some interesting things. Functionally the watch as the time and a second time zone. The second time zone is displayed in a transparent disc that goes around the center of the dial and moves in one hour increments. You see what the second time zone hour is over the white section on the right of the face. It uses the main minutes hand for the minutes. Pretty simple. The bottom of the case shows the tourbillon underneath the “cage” that looks like spokes. There are also three other indicators on the dial. The upper left has a power reserve indicator for the movement, which has up to 70 hours of power reserve. Adjacent to it is a movement torque indicator. This part of the watch is a bit gimmicky but cool. Basically it shows the rate of power that the mainspring is dishing out. You want the torque indicator to be in the middle section for the watch to be optimally accurate. This function is really a discussion for another time. It is a pure “luxury features” that is fun to have, but not necessary. Then you have a function selector on the middle right portion of the dial. This is for indicating to you what function the crown will perform when it is used. This function is adjusted via a pusher in the crown. The different functions involve setting the time, winding the movement, and adjusting the second time zone. This is of course instead of pulling out the crown to perform these actions. 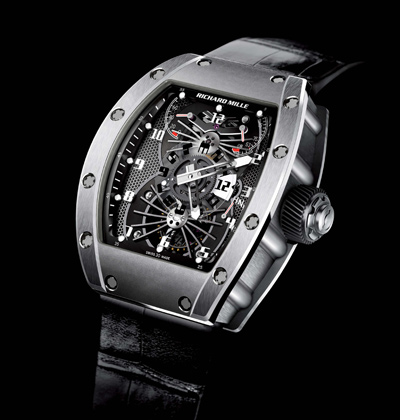 While I only briefly went over the movement, the true watch lover will of course be interested in knowing all the “passive” functions that the movement has for making it “better.” I will leave these up to Richard Mille if you are more interested, because I don’t feel like discussing concepts such as “the phenomenon of periodic internal mainspring adhesion.” There are a number of very cool, fancy elements to the movement. For the amount of money a Richard Mille watch costs – there should be.

How to critique or evaluate a watch like this is really tough. There is no mass market for these watches, and there is no real way of comparing them against competitors as there really aren’t any. You can love or hate the style, or be outstanded by the complexity or outraged by the price (probably in the $200,000 – $300,000 range for this RM022 model). When you see Richard Mille watches in person you get a different perspective. I have never not been impressed by them. Sure you can not see yourself wearing them, or even liking the style, buy you must admit with every part of your cynical self, that they are well made, and that they are very cool.  Maybe the people who design watches like this could better put their time in other things given their level of expertise, or maybe we can be happy that they are following their passions just as everyone else hopes that they could as well. Look out for the Richard Mille RM02 Aerodyne Dual Time Zones watches soon.