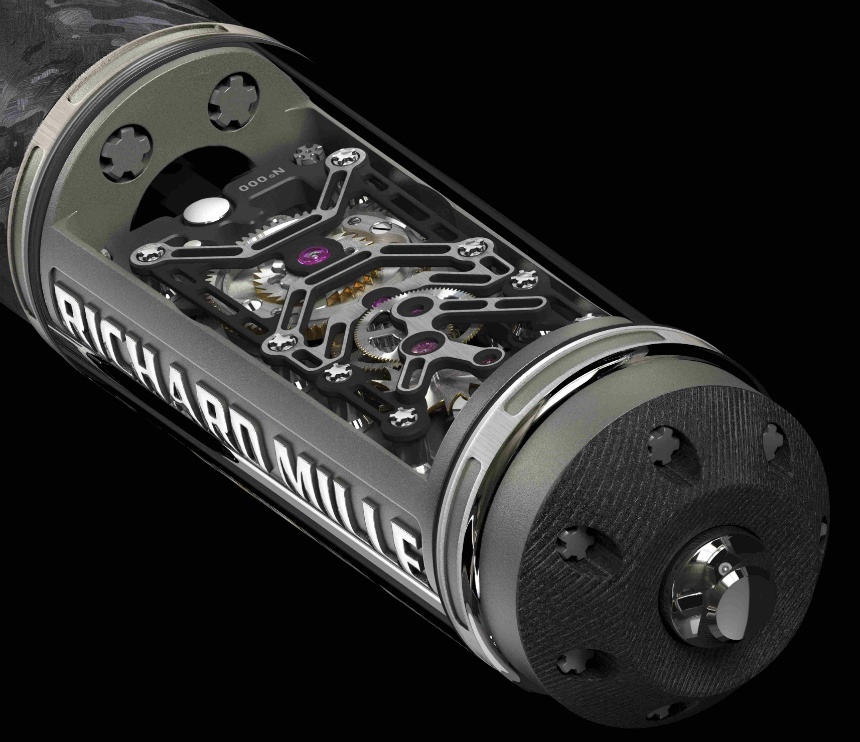 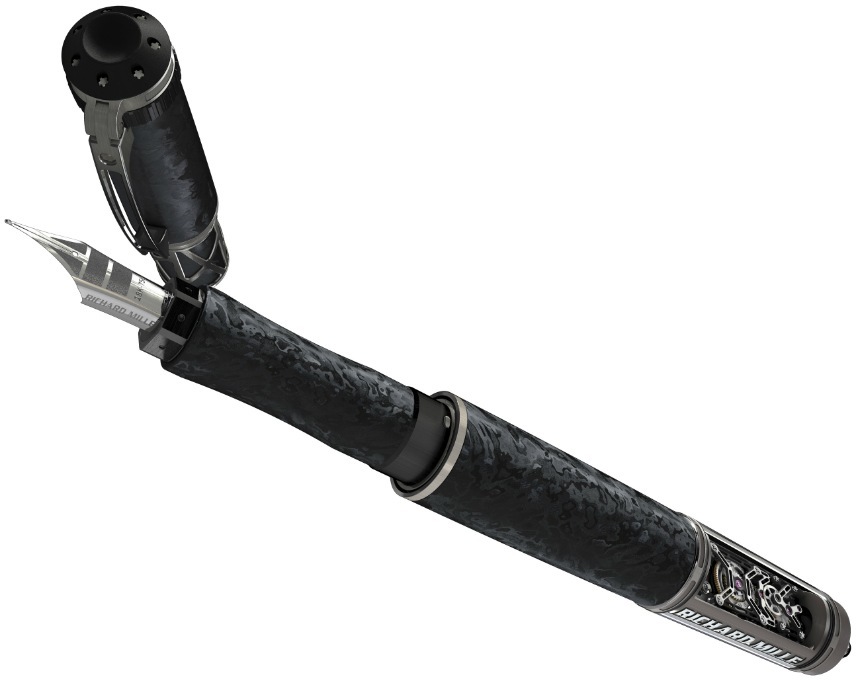 It happens only ever so rarely that we cover other products than watches here on aBlogtoWatch, but this $105,000 Richard Mille RMS05 fountain pen is both bold-looking and technically impressive enough to justify a closer look. With a fully automated and, of course, completely mechanical device fitted into it, it is an over-the-top novelty piece from Richard Mille, brought into reality with the kind of excessive engineering so typical of the brand. Let’s see what it does and how it works exactly. 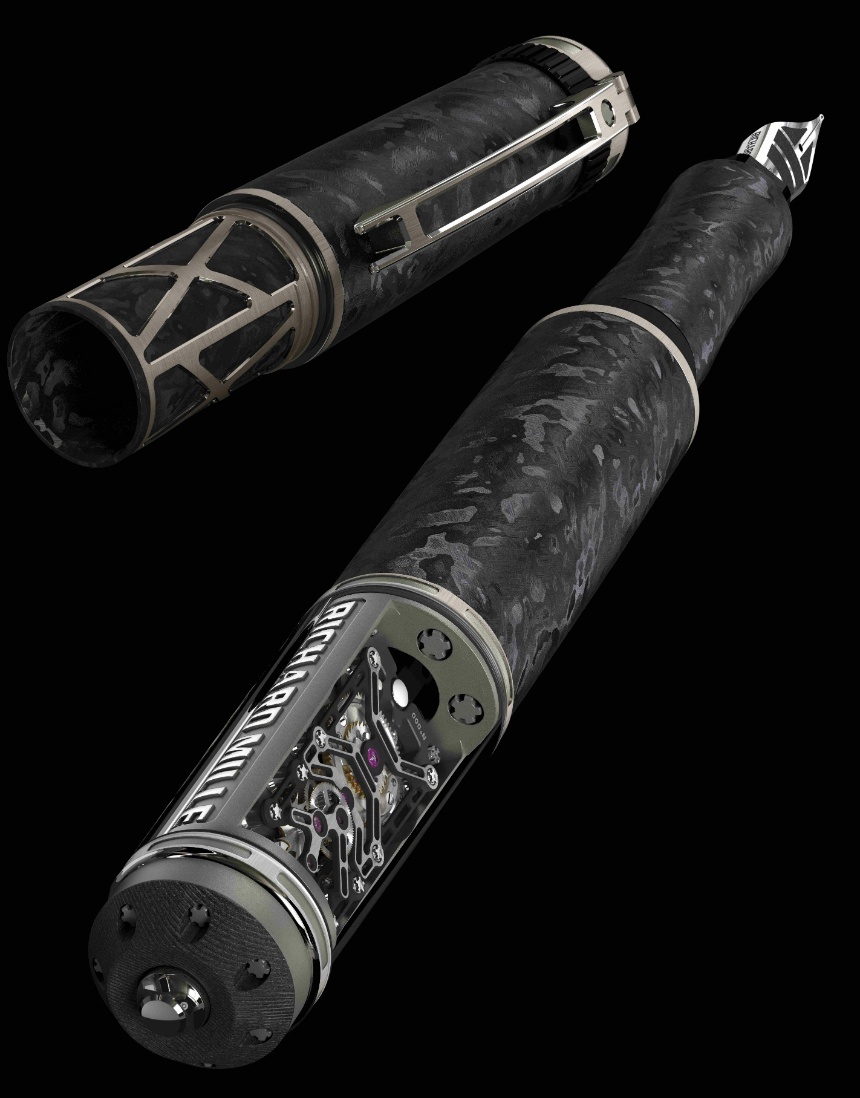 Looking at the horology world in general, I think it is safe to say that the watch industry has reached a critical mass and self-confidence when it comes to taking on other luxury market segments. Max Busser of MB&F tells me that “it just happens” that he makes watches as opposed to something else. Put differently, his brand does mechanical objects that largely happen to be timepieces. Jaquet Droz, for instance, is well known for his work in the field of automata, and companies that began in other industries have also been successful in the world of watches: it seems that many innovative watchmakers don’t confine their talents to the field of watches only.

So is Richard Mille going full throttle into pen making, and should we expect to see a full RM pen family in the future? Unlikely. More probable is that the decision to build a pen is tied to the long-term growth plans of the company and the way Mr. Richard Mille does things. Mille definitely has a sense for drama, and we have almost come to expect to be surprised by the enfant terrible of the watch world. 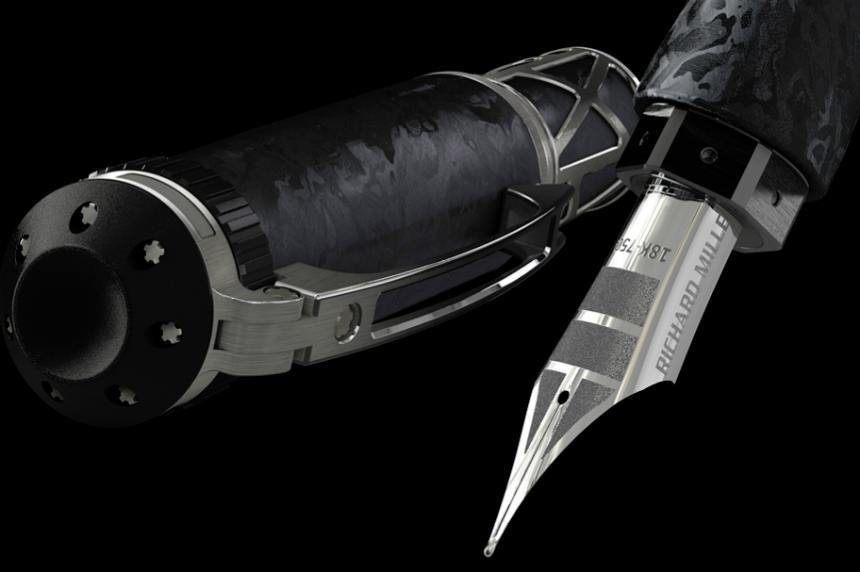 From a brand like Richard Mille, we are used to seeing creativity and innovation in watchmaking, and some kind of “revolution” in style is expected almost each year. It’s part of the very fabric of the company. One gathers from the brand that its products are designed as racing machines for the wrist to match the high-octane lifestyles of its clients. If the company’s edge goes, so does the interest. Thus, their first pen had to retain the same “edge” that RM is known for. 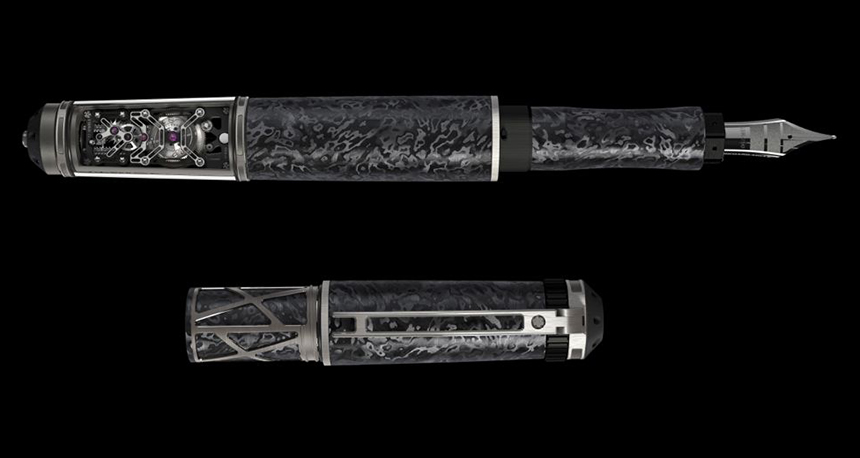 The innovation this time comes from outside watchmaking and is in perfect alignment with the brand’s DNA. It must be noted that Franck Muller has also gone that way with the launch of the Franck Muller 55 yacht. Moving into new luxury segments is desirable and possible only for the brands at the very top of the food chain. It’s desirable because their customer base is smaller, and possibly because they have the cache to exert their influence in other luxury fields. It is as if the mojo they have can overflow in other segments. For brands positioned at the middle of the market, such moves are not necessary or easily achieved. So in general, we should not expect a massive trend in this direction for the industry, as it’s not really plausible for the majority of the market. 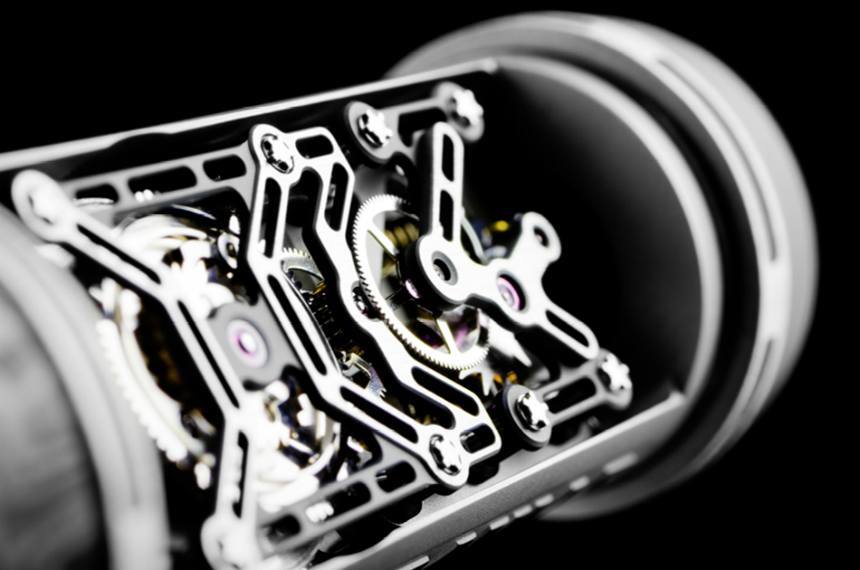 Coming back to the Richard Mille RMS05, it took four years to develop this pen, which involves a very high level of complexity. This is particularly interesting, as a pen does not offer the same creative possibilities as a watch. Basically, a pen does only one thing: write. Developing mechanisms and additional functions is extremely difficult. This is another reason why it is unlikely that Richard Mille will come up with new pen calibers. Very possibly, we’ll see more variations in terms of styling, though.

The barrel and cap of the pen are made in NTPT carbon. A type of carbon formed from thousands of layers of carbon compressed irregularly against each other and mixed with a special resin binder. Once a block is formed, the barrel and cap are turned, or cut, exposing the transversal grain of the layers. The visual centerpiece of the pen is the intricate mechanism located at the top end. Having the mechanism located here can render the pen top-heavy and uncomfortable when writing. The solution is to make it extremely light and durable in Grade 5 titanium, an area where Richard Mille has extensive experience. 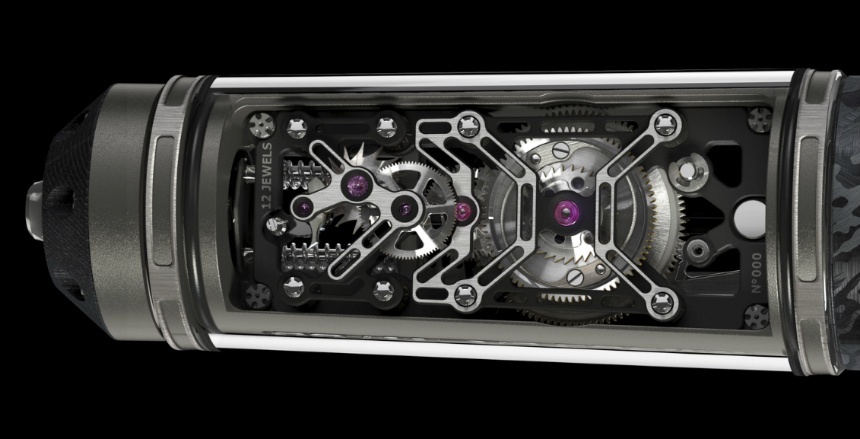 The mechanism is equipped with a fully functioning escapement, self-winding system, bridges, and wheels. It is used to retract and advance the nib. This type of mechanism known as a “vanishing nib” in the pen world, for those not familiar. The innovation comes from the way the nib is actioned. The details are scarce at the moment, but most likely, the automatic movement winds a coil. When the button on the top of the pen is pressed, the coil is released and the stored energy is used to glide the whole nib unit forward. When the cap is pushed back on the pen, a complex mechanism winds back the coil, pushing the nib inside, and the pen is ready for another cycle. Basically, pushing the cap back on the pen functions like a manual winding mechanism. Since the mechanism is wound already by the push action of the cap, it means that the self-winding mechanism functions as a top-up system. So it is useful, but not essential. 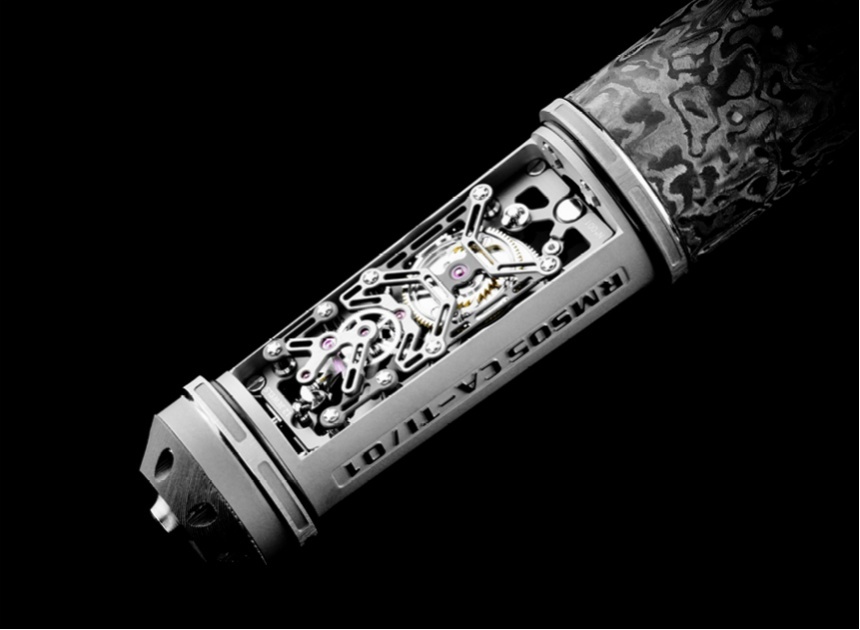 Traditionally, “vanishing nib” pens do not have a cap. The whole point of such a system is to do away with the cap. The Richard Mille RMS05 needs a cap, though, to manually wind the mechanism. Since the mechanism needs a manual rewind, the cap is a necessary compromise. However, having the barrel fully crammed with the mechanism, there is no way to replace the ink cartridge via the top end of the pen, as in most pens. Richard Mille has solved the problem by having it replaced, unconventionally, via the front of the pen. This way, the whole nib unit must be pulled out and fitted back again with the replaced cartridge on.

Fundamentally, the pen does not innovate in the way the fountain pens work, but in the way the nib is concealed. Even so, the gliding action is incredible and the technology behind it is impressive enough. This complex piece of engineering is aimed mainly at the watch aficionado who is going to get a kick out of playing with their Richard Mille pen. For the regular fountain pen lover, it would be rather foreign. But then, the regular fountain pen user doesn’t lead a particularly “high-octane” lifestyle. 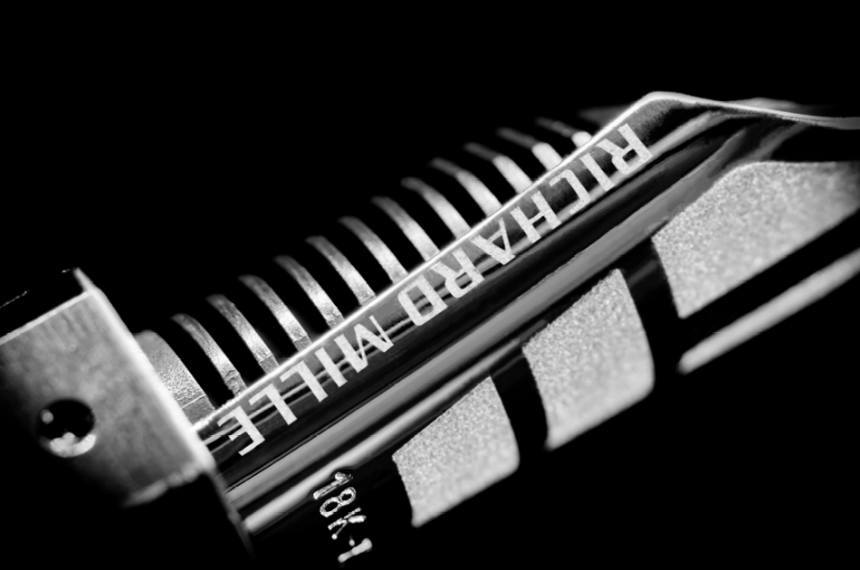 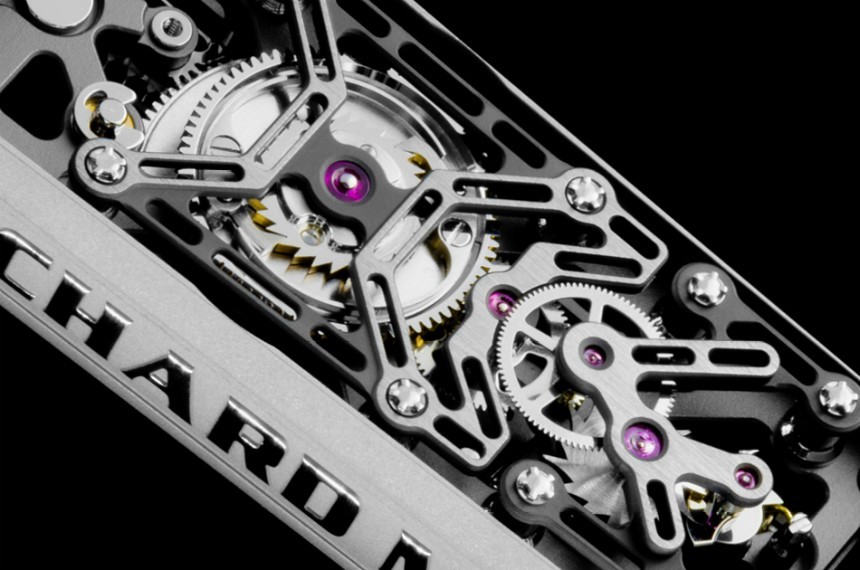 While being a complementary piece for the Richard Mille watch owner, the pen would be excellent as a gift instead of an add-on when selling a Mille watch. So there is a sale-method rationale behind it too. In the pen world, only Yvan Arpa of Artya, and previously of Romain Jerome, have tried such audacious designs and incorporated functional mechanisms in pens, with the Romain Jerome Titanic pen and the Avenue du Mail under the Spero Lucem brand. Price for the Richard Mille RMS05 Pen is $105,000. richardmille.com

Iunal Giumali created his own pen-with-complications concept brand Styljoux. He is fascinated by pens as writing instruments and watches as instruments to measure time. When he doesn’t take himself too seriously, he enjoys writing on his pen blog Penficionado.
Advertising Message