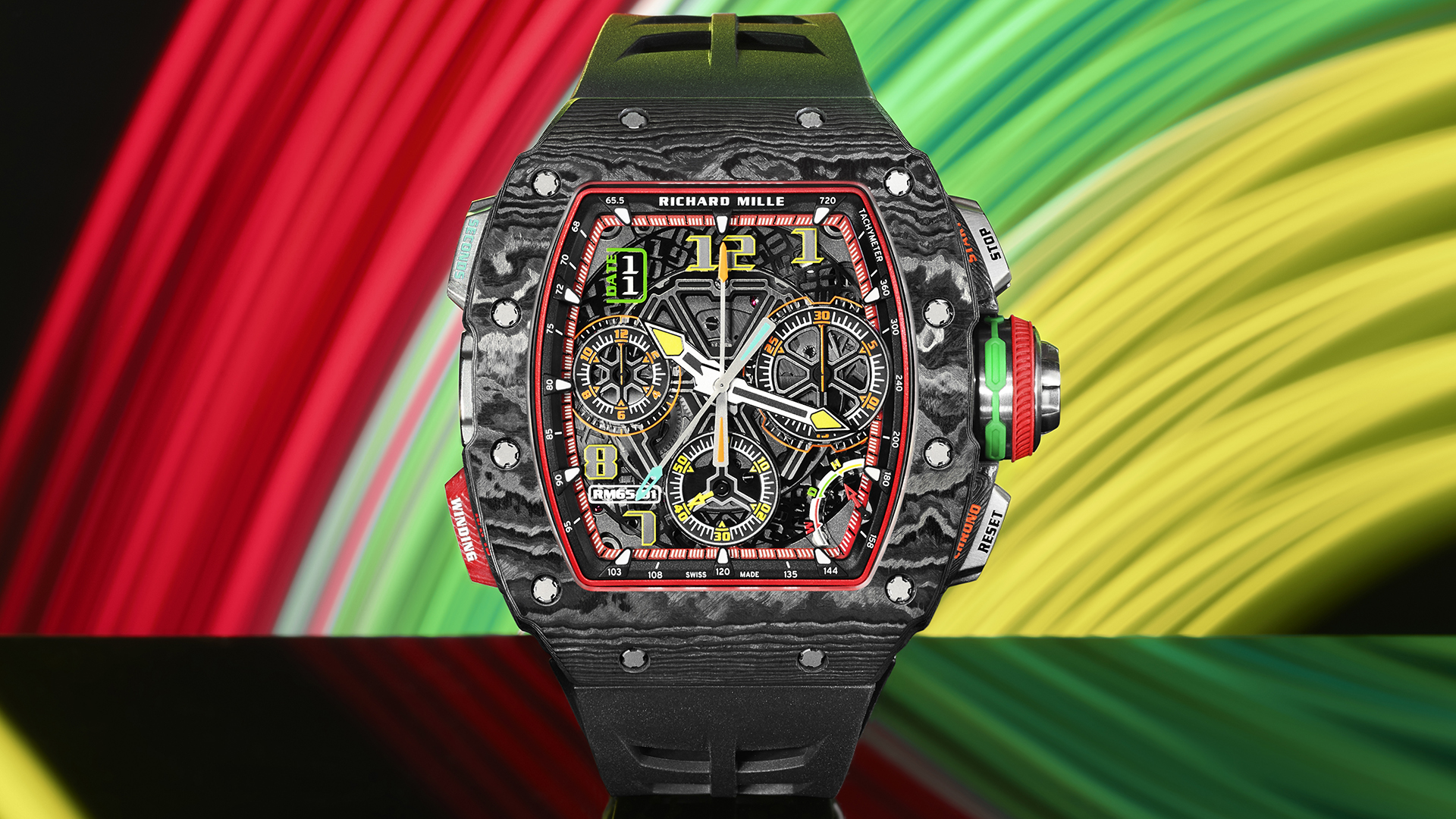 Innovative haute horlogerie brand Richard Mille has built its reputation upon the use of exotic materials, complex construction, and extremely intricate sporty design. These designs have become icons of their own in the ultra-premium sports watch field, helping to drive a new generation of hypercomplex sports chronograph designs. When Richard Mille itself announces that its newest release is its most complex timepiece ever, then, that statement carries more than a fair amount of weight. The Richard Mille RM 65-01 Automatic Split Seconds Chronograph delivers on that promise, creating the brand’s first automatic rattrapante chronograph design in a technically advanced, exquisitely intricate package. 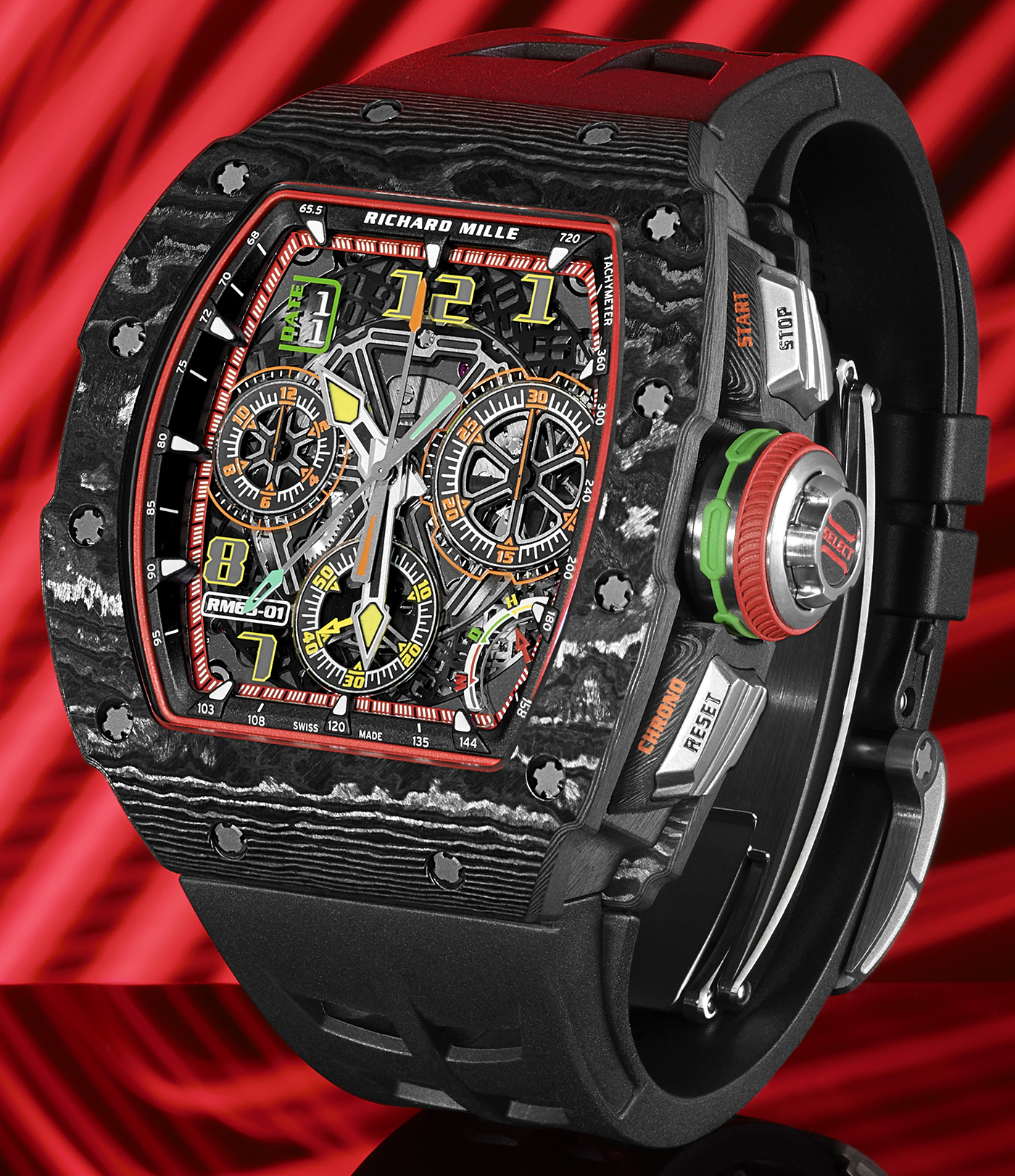 Available in both Richard Mille’s proprietary layered Carbon TPT material and in a mix of red gold and Carbon TPT, the signature tonneau case of the RM 65-01 Automatic Split Seconds Chronograph measures in at a sizeable 44mm by 49.9mm. The curving shape, sandwich construction, and distinctive bezel screws should all feel familiar to fans of the brand, but this new case sets itself apart by its tactical use of color and a few genuinely unorthodox features. The pushers at 2 o’clock, 4 o’clock, and 10 o’clock are all relatively familiar, although rendered in a sculptural mix of Grade 5 titanium and Carbon TPT. These pushers handle the chronograph functions, with the 2 o’clock and 4 o’clock pushers performing the traditional stop/start and reset functions respectively, while the 10 o’clock pusher tackles the engagement of the split seconds function. All three of these pushers feature a splash of bright orange, while the remaining pusher at 8 o’clock is rendered almost entirely in vibrant red. The titanium crown at 3 o’clock brings in further punches of color in intricate bands of rubberized red and green. But what do these colors mean? According to Richard Mille, each of these colors denotes a unique function. Orange elements, for example, are tied in with the chronograph complication. Blue elements relate to the split seconds function, green is used for elements related to the date window, and red elements are tied into winding. While this red is self explanatory around the crown, its use on the 8 o’clock pusher hints at one of the RM 65-01’s innovative party pieces. This pusher is a patented rapid winding mechanism, able to fully wind the mainspring from empty in 125 presses. The crown also hides a few unique tricks. Rather than the traditional method of pulling out the crown to adjust various settings, a pusher in the center of the crown instantaneously switches the function between traditional hand winding, date adjustment, and time adjustment. Water resistance stands at 50 meters. 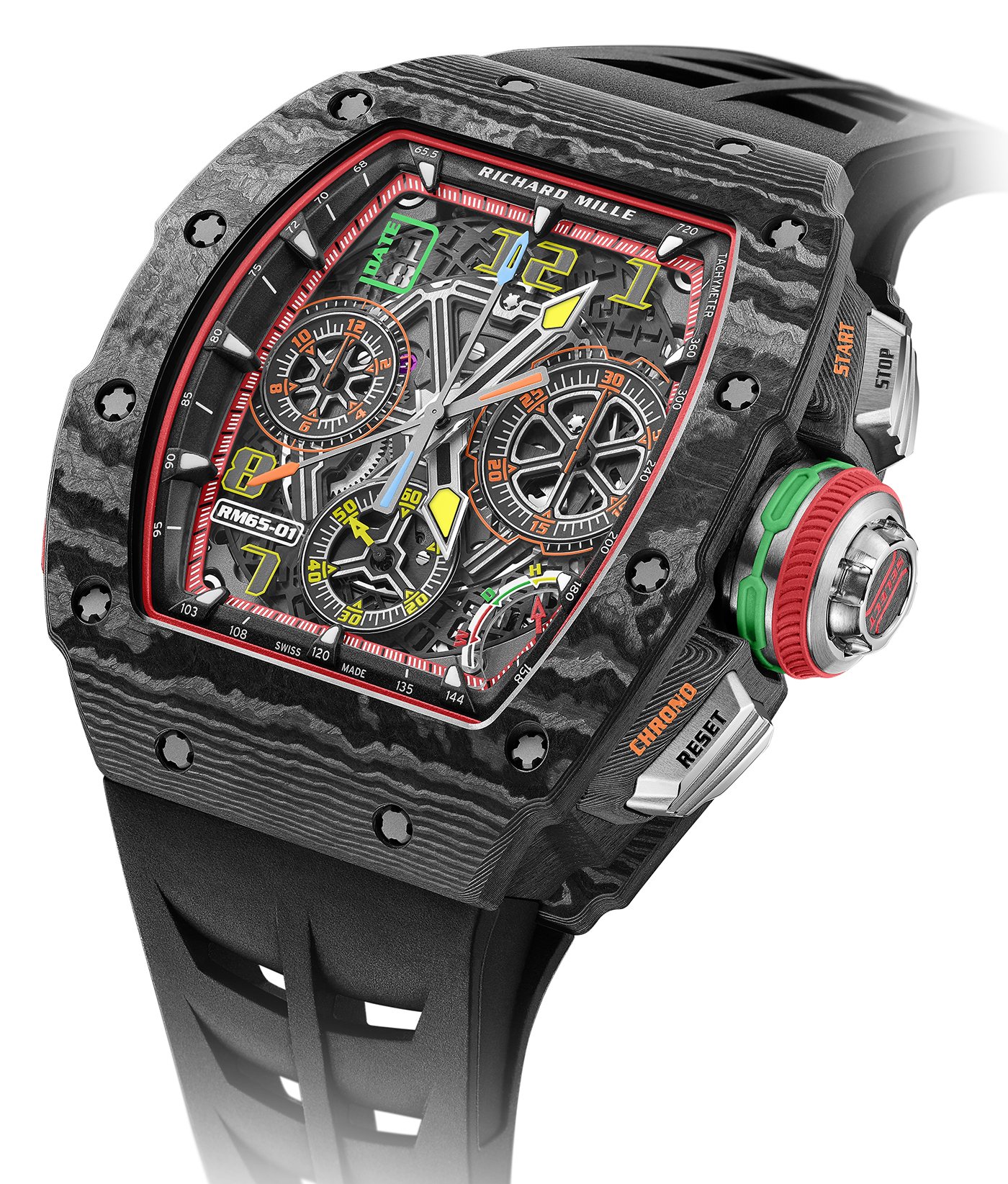 The first impression for some upon viewing the skeleton dial of the Richard Mille RM 65-01 Automatic Split Seconds Chronograph will likely be sensory overload. There’s no denying this is a visually dense design between the complications, skeletonization, and the variety of colors used, but once wearers have a moment to orient themselves the RM 65-01 can be an impressively legible watch. Like the case, the dial follows the same color coding scheme, with the addition of yellow for general timekeeping, so individual complications can be picked out at a glance. The complex outer rehaut houses a full tachymeter scale while blunted triangular protrusions hang down to create lumed hour indices. Inside this outer ring, nearly every piece of available visual real estate is filled with some kind of information, from the 10:30 skeleton date window to the yellow edged angular Arabic hour numerals, wheel-inspired chronograph subdials, and aggressive futuristic arrow handset. The small retrograde subdial at 4:30 acts as an indicator for the current selected function of the crown, color coded according to the rest of the design. The visual details are heavily inspired by modern motorsports, with touches like the skeleton wheel spokes of the central skeleton dial and chronograph subdials, as well as the slotted PVD titanium date wheel taking on the appearance of a high performance brake disc. Overall it’s a dial design that is likely to evoke strong opinions, but the level of finishing and use of space is undoubtedly impressive in initial images. 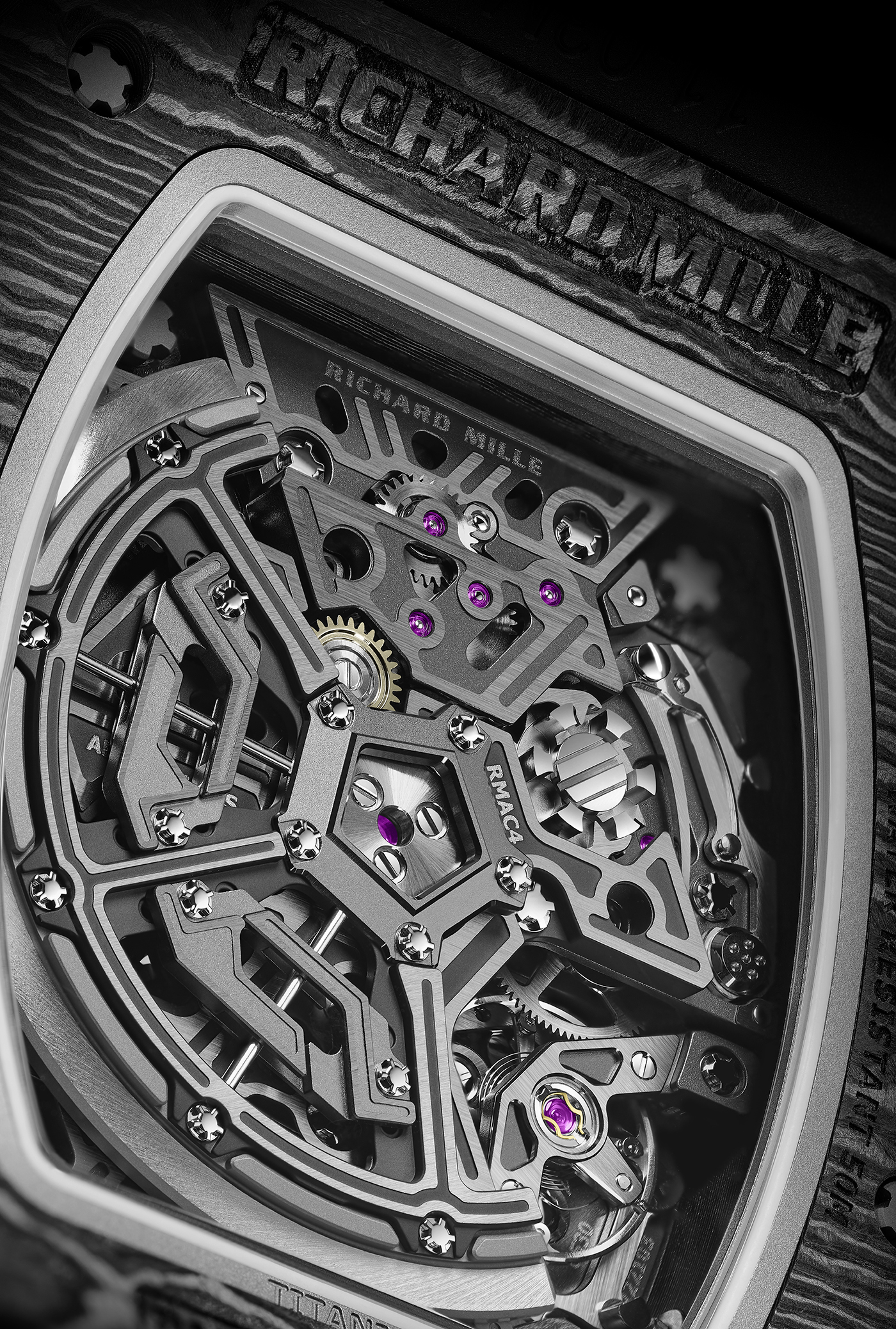 Richard Mille powers the RM 65-01 Automatic Split Seconds Chronograph with the all new RMAC4 automatic split seconds chronograph movement, developed in partnership with movement experts Vaucher Manufacture Fleurier. The RMAC4 incorporates a host of technical achievements beyond the split seconds complication, including an advanced variable geometry winding rotor, capable of adjusting the inertia exerted by the rotor to compensate for more active or sedentary wearers. The RMAC4 also features a column wheel actuation system along with a vertical clutch, as well as further adjustability in the form of four variable weights mounted directly to the Gluycdur balance to allow for more accurate and repeatable adjustment. Beating at a high speed 36,000 bph, the movement features a mainspring barrel which rotates once every six hours instead of the more common seven and a half in order to ensure more even torque distribution throughout the 60 hour power reserve. Finishing on the RMAC4 is intricate, angular, and futuristic, with the titanium bridges and baseplate receiving both PVD and electroplasma treatment before sandblasting, anglage, and hand polishing. 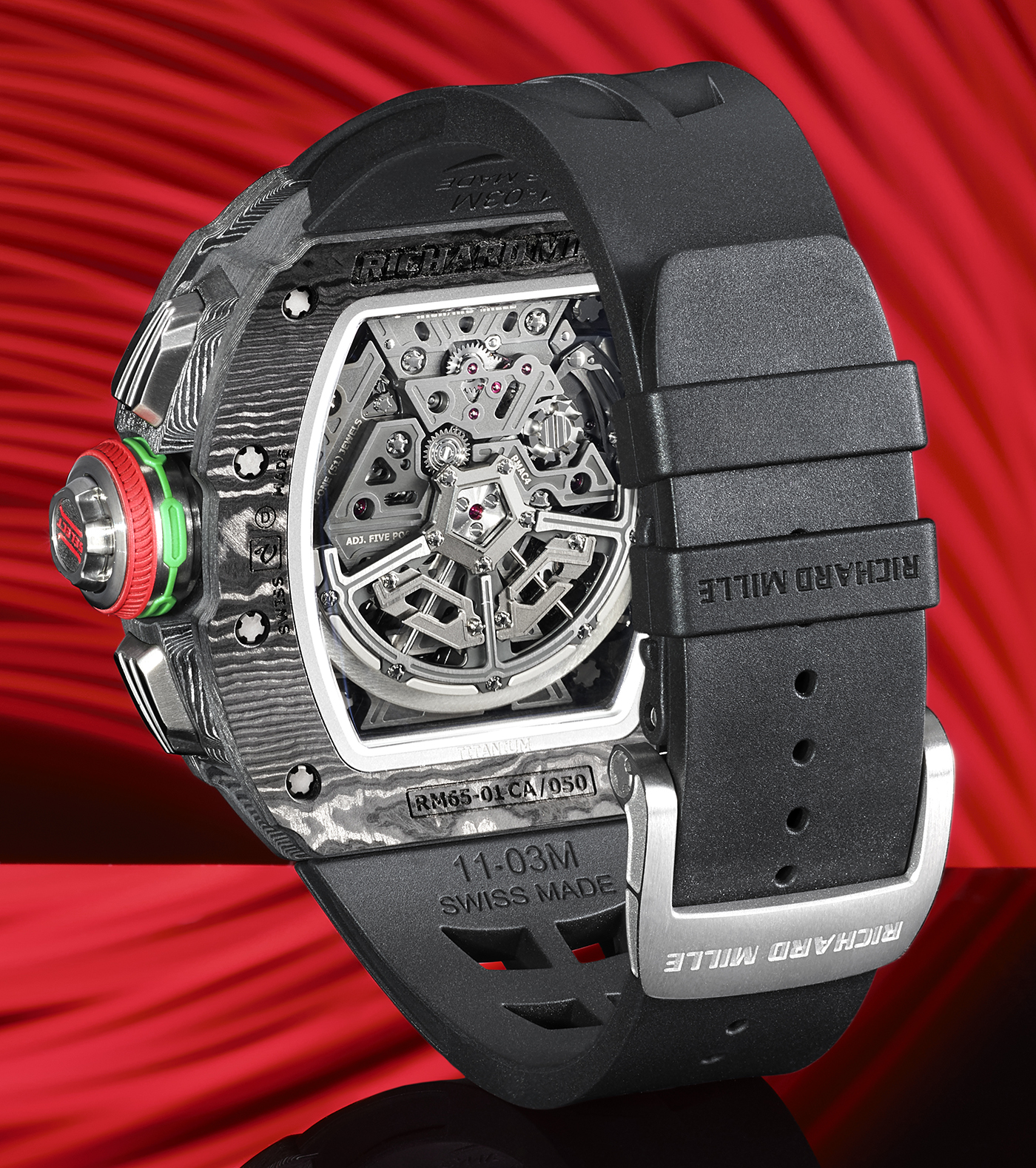 The Richard Mille RM 65-01 Automatic Split Seconds Chronograph is paired with an aggressively vented integrated strap in black rubber. Like many of the brand’s straps, this features a deep and dramatic cutout along the side and a flared profile, allowing the cutout to flow effortlessly into the recessed case side visually. 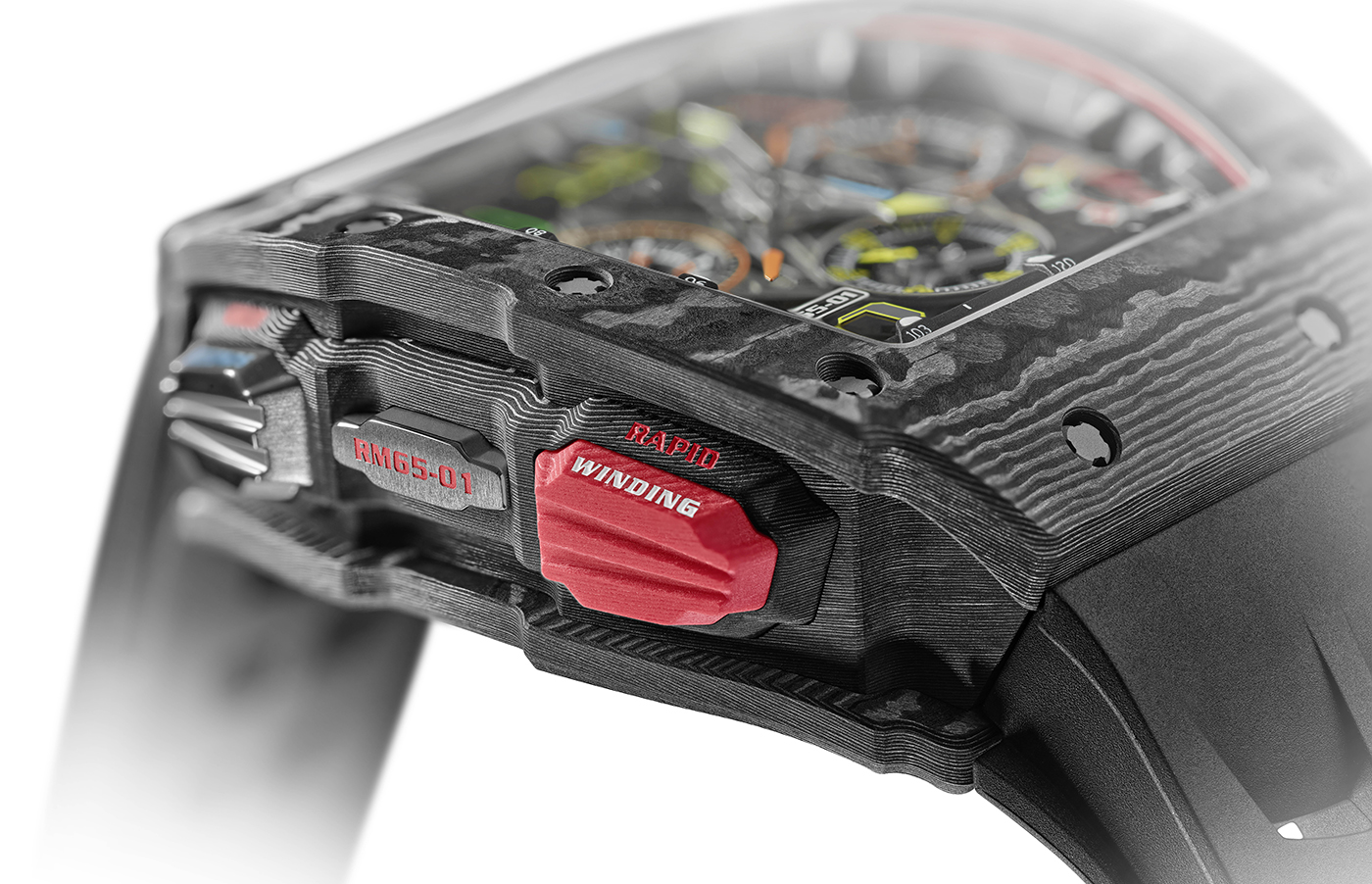