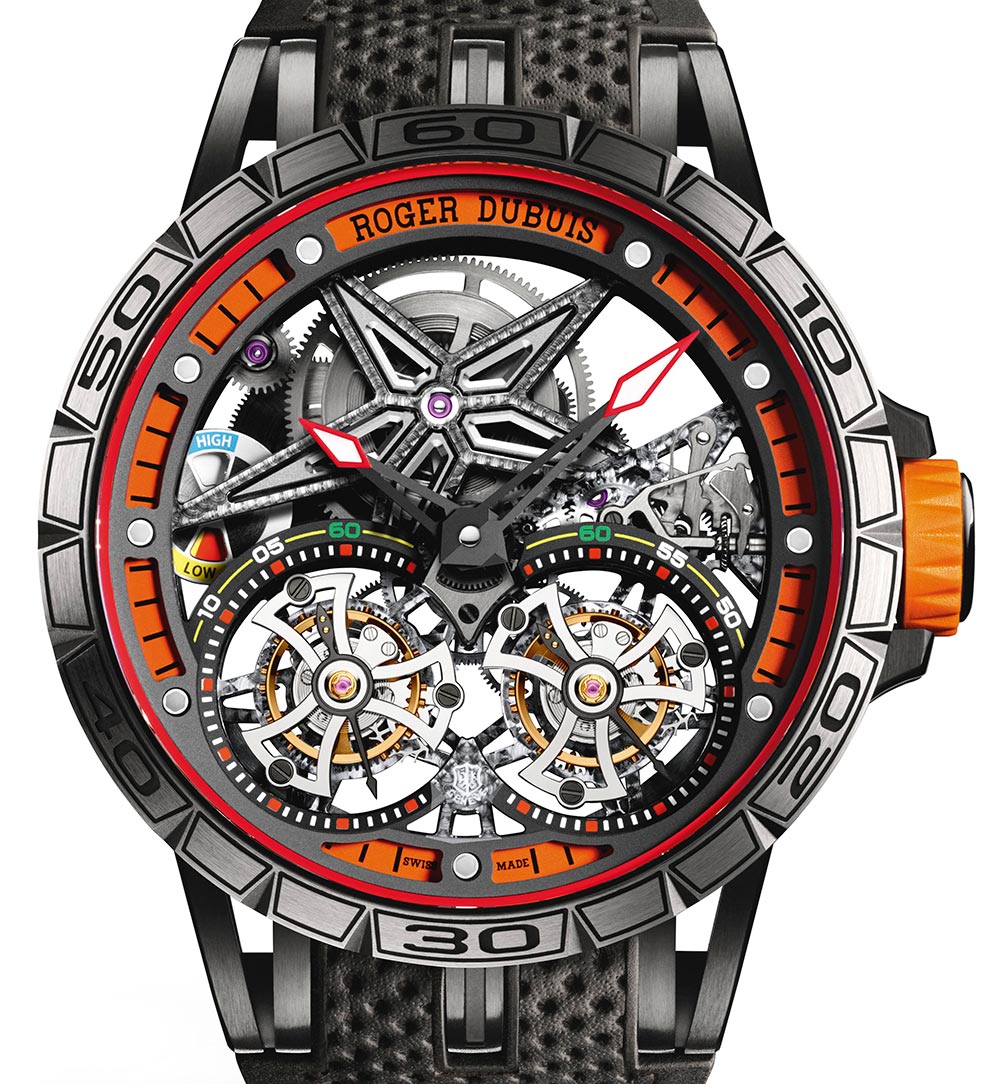 Elegant and classic are two words that are seldom used to describe a Roger Dubuis watch. Instead, try words like brash, bold, and outrageous. Yes, Roger Dubuis is back at it again with a new version of its second generation Excalibur Spider Double Flying Tourbillon watch. The new watch features aesthetic elements meant to evoke the high-tech and exciting world of supercars and motor racing, so if you consider yourself a petrolhead, read on to find out more.

It is often said that fast cars and expensive watches go hand in hand, and there is certainly some anecdotal evidence to support that. After all, an expensive 200mph supercar has certain things in common with a $200,000 watch with double flying tourbillons. I am referring, of course, to qualities like avant-garde styling, over-engineering, and attention to detail. So it shouldn’t be a surprise to learn that Roger Dubuis’ new Excalibur Spider Double Flying Tourbillon was designed squarely with car enthusiasts in mind. 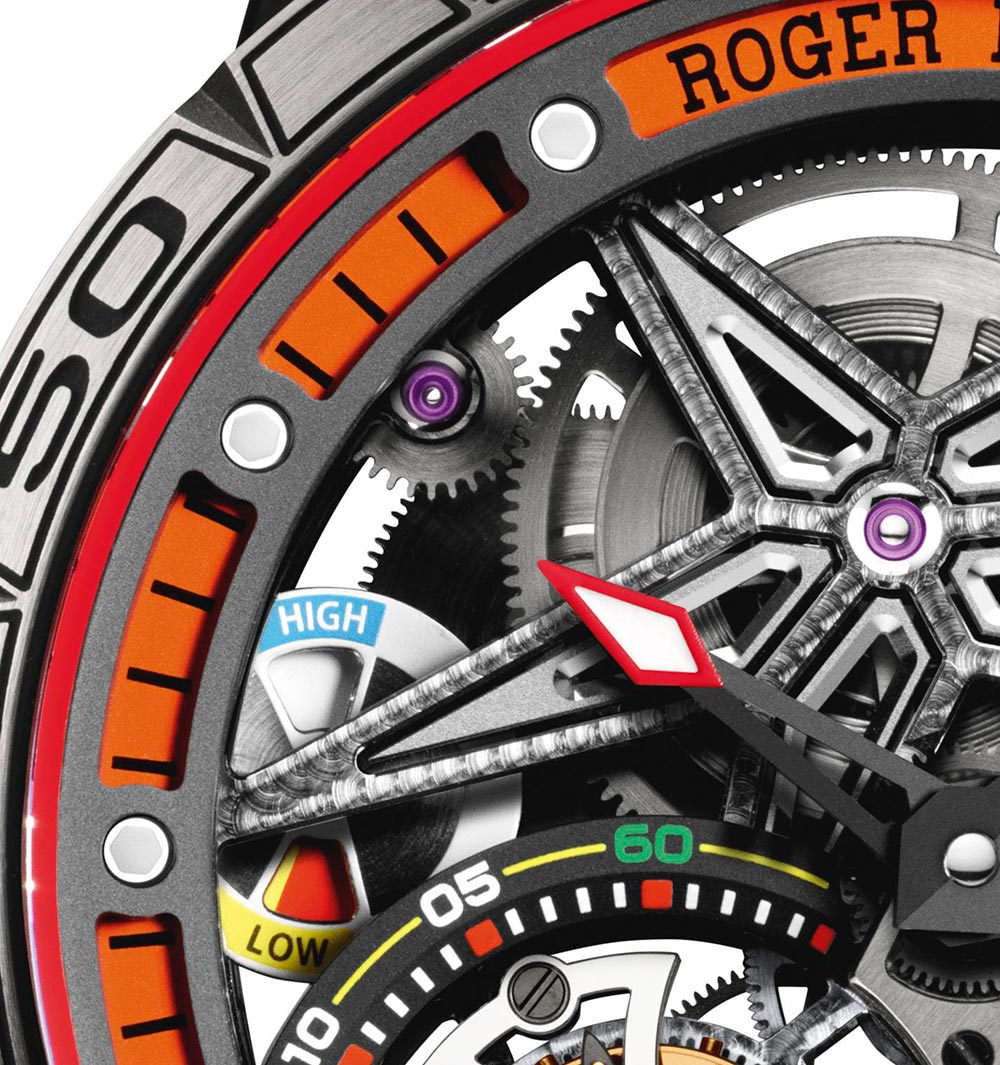 The new Roger Dubuis Excalibur Spider Double Flying Tourbillon has a 47mm-wide and 14.95mm-thick black DLC titanium case. The sides of the case feature over-molded orange rubber that gives the case a very racy look. The bezel is black DLC titanium too, and so is the crown. Like the case, the crown is also rimmed by orange rubber to add contrast and give it a sporty look. To complete the racing look, the watch comes with a black and orange perforated leather strap that has been lined with black rubber. Water resistance is 50m, so the watch isn’t afraid to get a little wet. 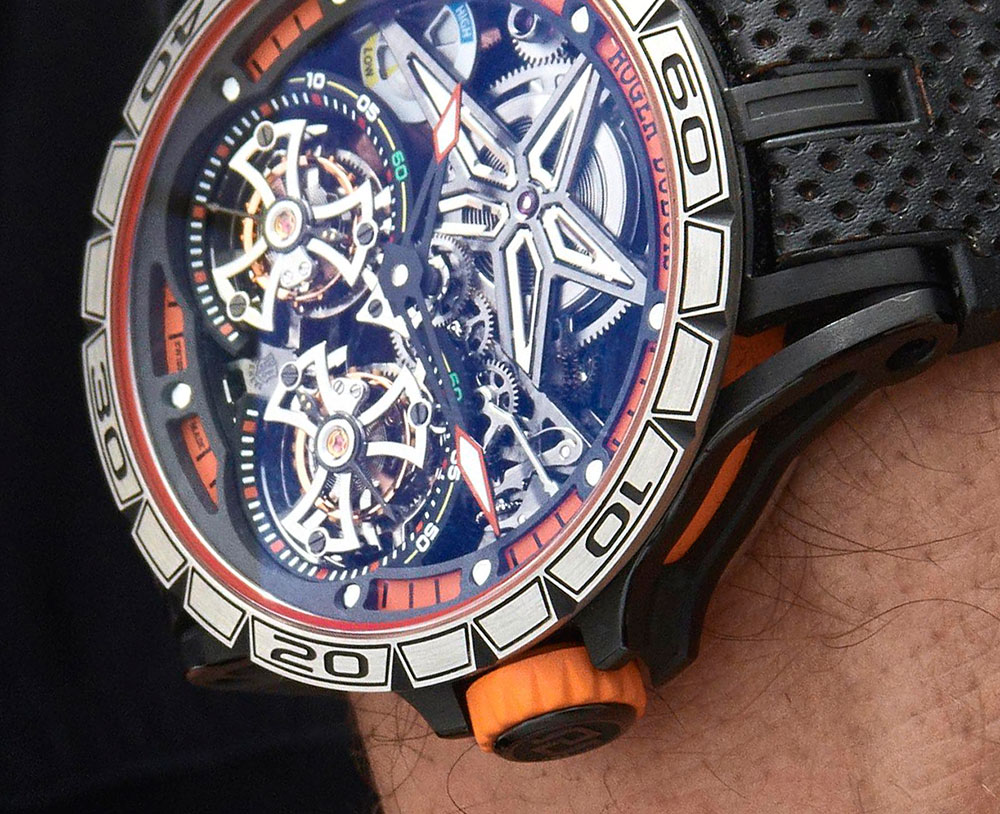 Like all the other Excalibur Spider watches, the new Roger Dubuis Excalibur Spider Double Flying Tourbillon features a heavily skeletonized dial. The skeletonization is expertly done, and from the front, one can make out a large star-shaped bridge that supports the mainspring barrel. To the left at around 9 o’clock, there’s a power reserve indicator that has been done up in the style of a fuel gauge. Incidentally, the power reserve gauge is a new element that is only present on the second generation Roger Dubuis Excalibur Spider Double Flying Tourbillon watches. 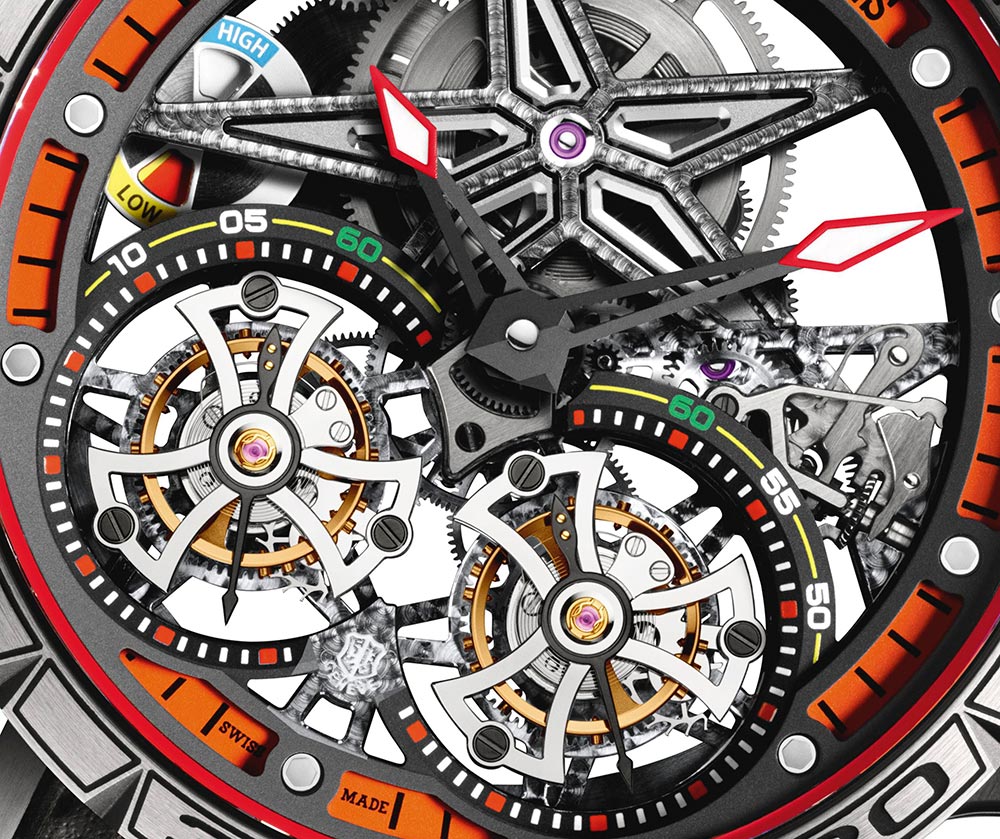 At 5 and 7 o’clock, you have the two stars of the watch – the twin flying tourbillons. These two tourbillons spin at a rate of a revolution per minute and double up as running seconds displays. Surrounding the two tourbillons are multi-colored seconds tracks that have been styled after the speedometers found in race cars. They also remind me of the flag of Italy, which is apt since Italy is home to supercar makers like Ferrari, Lamborghini, and Pagani. 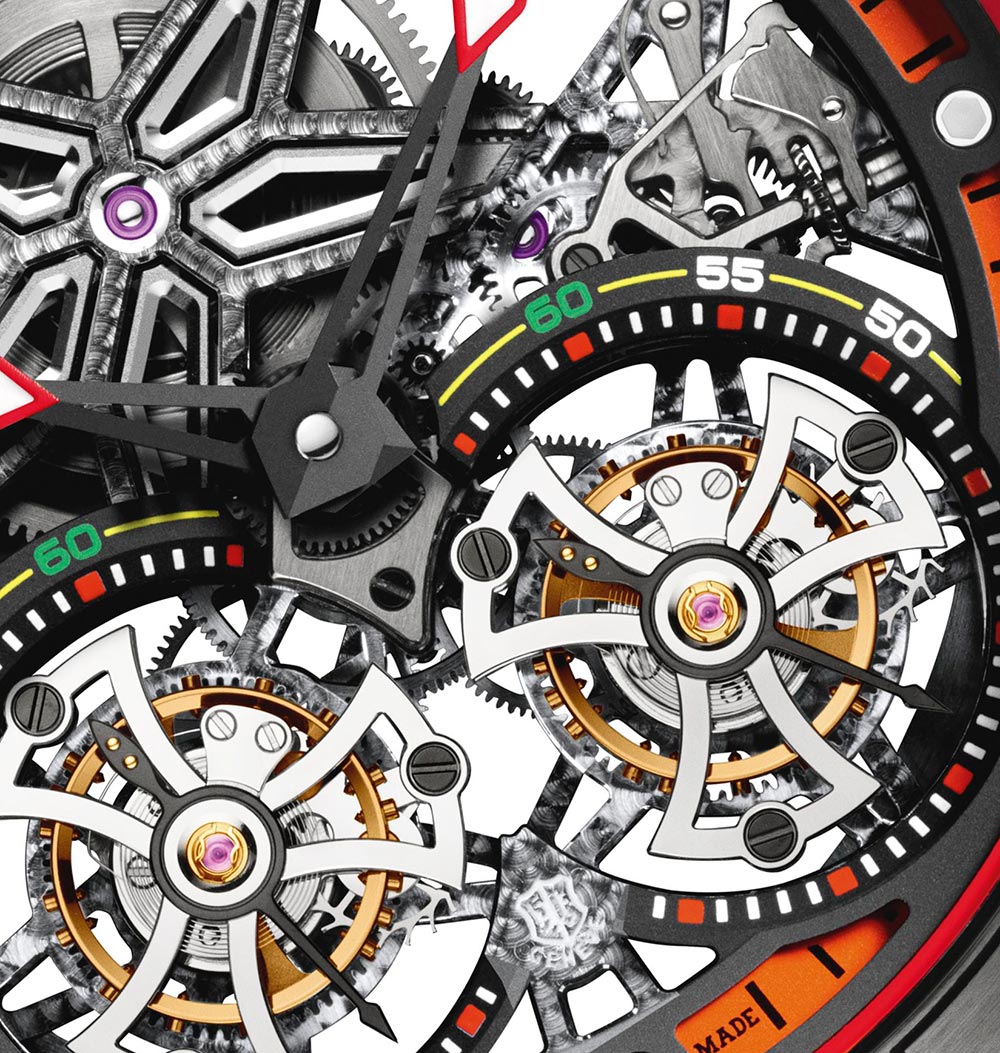 The movement within is the caliber RD105SQ. It is awarded the Geneva Seal (see more about Roger Dubuis and the Geneva Seal here), so you can expect a very high level of timekeeping and finishing. For example, the skeletonized bridges are NAC coated so they appear dark gray, and they are finished with circular-graining. The caliber RD105SQ is made up 366 components. It beats at 3Hz, and owners can expect a power reserve of about 52 hours, which is quite decent considering it has only one mainspring driving two fast-spinning tourbillons. 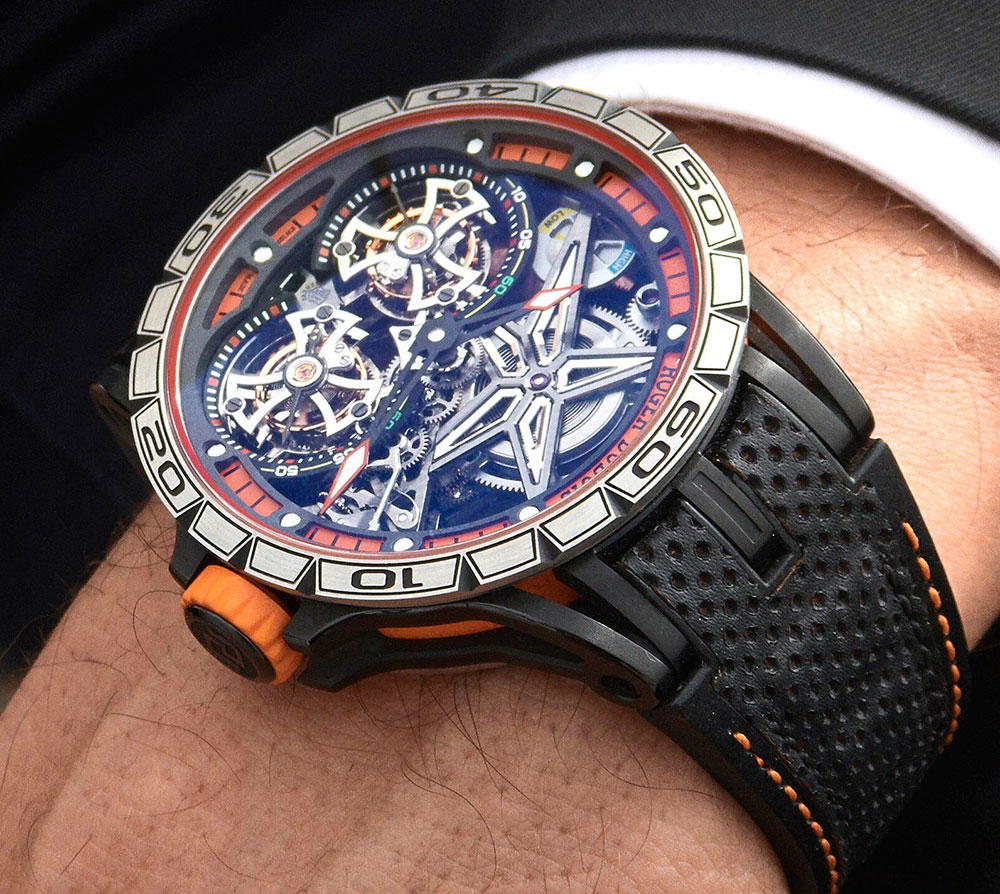 Watches like these are often divisive, but the color scheme of this particular Roger Dubuis Excalibur Spider Double Flying Tourbillon is quite attractive to me. I’m not sure why, but when I look at it, I’m instantly reminded of a bright orange Lamborghini Aventador. This particular version of the Roger Dubuis Excalibur Spider Double Flying Tourbillon watch is limited to just 28 pieces and the price is $267,000. That’s not enough for an Aventador, but you might be able to get a Huracán if you go easy on the options. rogerdubuis.com